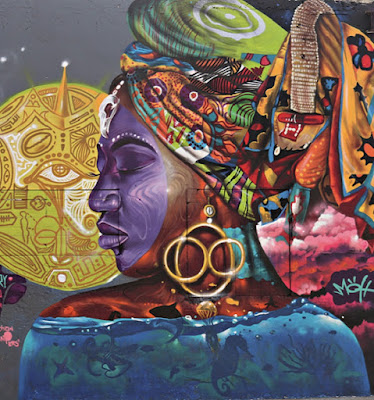 During tumultuous, turbulent times, artists tend to "go big." Modern-day Africa is facing many challenges and its artists are responding with large scale works, many of which are the size of a building's wall - because that's where they are painted!

Going "big" for some of Africa's street artists is no figure of speech. A Tunisian artist born in France, eL Seed, painted a spectacular mural stretching across fifty buildings in the Zaraeeb neighborhood in Cairo, home to the city's often-scorned garbage collectors. Painting in a style known as "calligraffiti,"  eL Seed dedicates his art to promoting awareness of human dignity. 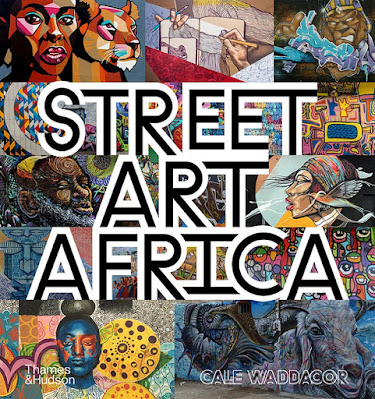 Surveying graffiti/mural paintings by 200 artists from across a vast and regionally diverse expanse, Cale Waddacor makes a convincing case that Africa's street art is both unique to the continent and a growing global force. A multi-talented artist, writer and photographer from South Africa, Waddacor investigated the street art of his native country. He launched a web site devoted to the graffiti and murals of South Africa and published Graffiti South Africa in 2014, a book similar in format to Street Art Africa.

Waddacor briefly reaches back in time, reminding us of the pictographs of ancient African artists on rocky outcrops and the wall paintings of New Kingdom Egypt. The haunting image of a lion in a 2019 mural, created in Morocco, testifies to  the "ancient" presence in the African present. 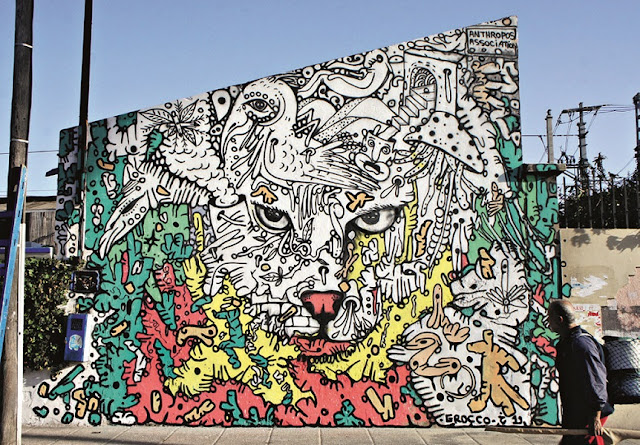 Waddacor's book also brings to mind how great artists, from around the world, have expanded the size of their works to match the events of the strife-torn eras during which they live.

Following the Mexican Revolution (1910-1920), mural painters like Diego Rivera folded-up their easels and set to work on the walls of schools and government buildings. Beginning in 1922, Rivera painted a cycle of 117 murals, in fresco like the Renaissance masters he had studied in Europe, on the walls of the Ministry of Public Education in Mexico City. The most famous work of this mural cycle had little to do with school books. Measuring over 14 by 13 feet, The Arsenal, shows people in Rivera's circle, including his wife, Frida Kahlo, distributing rifles and ammunition to insurgent workers.

What has all this to do with graffiti artists and mural painters in contemporary Africa?

The words of the Mexican minister of education, José Vasconcelos, who commissioned Rivera's murals, are applicable to the street artists of today's Africa. Vasconcelos called for a new art, “saturated with primitive vigor ... sacrificing the exquisite to the great, perfection to invention.”

The words of Vasconcelos' bold declaration are as true today as in 1920, except for "primitive," a word once widely-used to describe African culture.

African street art is anything but primitive. Despite the growing sophistication in African mural painting, the base level of skill and motivation of its practitioners has been impressive from the start. The "reach" of African street art has seldom eluded the grasp of its artists.

Indeed, there are deep levels of philosophical awareness among the street artists of Africa. Waddacor quotes Jobray, an artist from Uganda:

What makes African graffiti unique is the fact that most graffiti artists explore their personal stories. They involve their cultural backgrounds in their themes and concepts and communicate with people. The visual aspect creates a connection; a deeper contact and understanding. 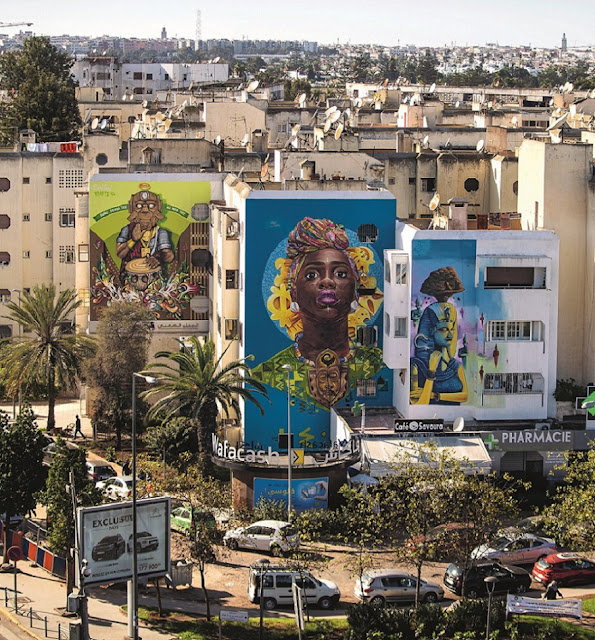 African street art is essentially an urban phenomenon. The response of municipal, regional and municipal governments varies widely. Some officials accept it with enthusiasm, others with bureaucratic indifference; some are downright hostile. It is the reaction of the people on the "street" that matters. The results, usually, are not merely positive but are proactive.

Waddacor quotes a South African artist, known simply as r1. An amazingly talented innovator, r1 uses barrier tape to create mandala designs of hypnotic power. r1 perceptively notes the way that people in local communities embrace the personal statements of street artists, interpreting the murals in the light of their own experience.

What I find fascinating about working in the street is the interaction that takes place between the passer-by and the art piece. As soon as you put a piece up it gets a life of its own and becomes open to interpretation. I receive fascinating opinions from very diverse backgrounds.

Before proceeding further, it is important to reflect on the nature of graffiti in Africa. The emphasis on the "personal" in African graffiti does not mean the same thing as it does in America. Some African artists meet together to "bomb" a vacant wall, that is illegally paint public or privately-owned surfaces with their "signatures" and graffiti designs. However, most of the time they seek permission from building owners or government officials before painting. 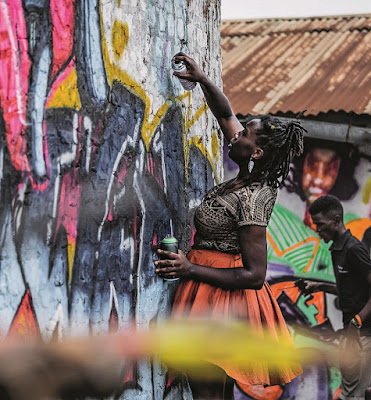 It is also interesting to note that aerosol cans of spray paint are still rare in some regions of Africa. These are regarded as highly-prized tools for creating art. When spray paint is unavailable, street artists use acrylic paint and brushes. Whatever the medium, the results are striking and powerful, often masterful.

When you view monumental works of street art like those painted by Faith XLVII on highway overpass pillars in Durban, South Africa, you are witnessing an act of the "transfiguration" of public space rather than transgression. Such mighty works of art become communal expressions of identity. 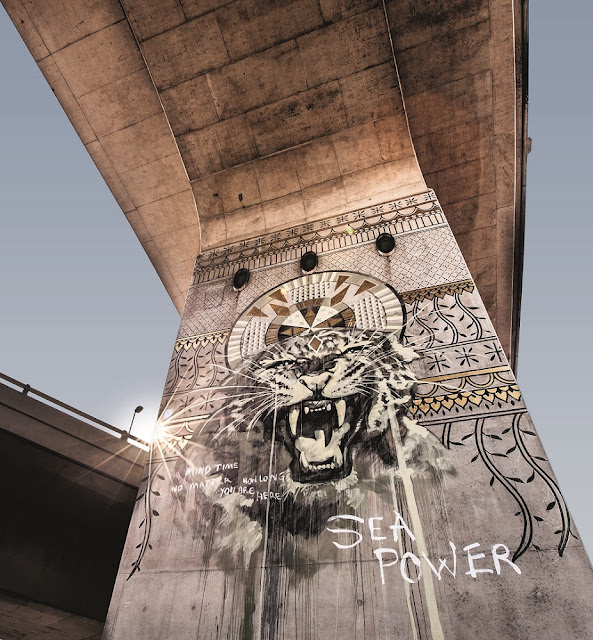 Along with the photo above, Street Art Africa shows another picture of a concrete pillar, also painted by Faith XLVII, with local street merchants selling their wares beneath the looming figure of an elderly woman dressed in traditional African garb. It is a magnificent image, showing art as a vibrant fixture of everyday life and a spectacular example of African popular culture.

Street Art Africa keeps this vast array of art, artists, regional influences and differences in check by a tour de force of integration. Organized by region, starting with East Africa, Waddacor's book presents a wealth of detail. Street Art Africa is readily understandable for general readers, as well as specialists in art. (There is a glossary of street art terms which I found particularly useful.) Basic, broad-view information about the street art of particular nations is complemented by special sections focusing on art festivals and interviews with twelve leading African street artists. 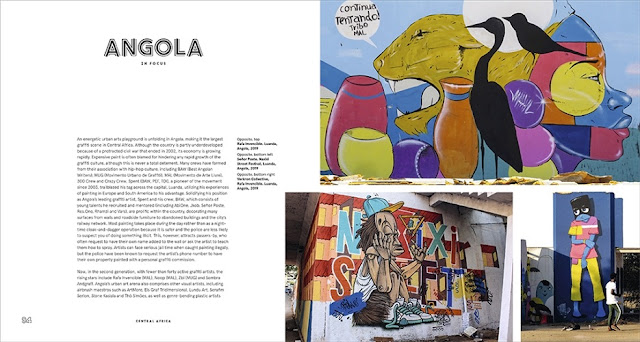 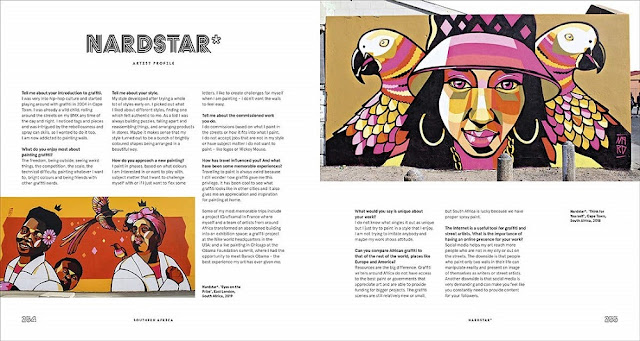 Page Displays from Street Art Africa, 2020
It is almost redundant to say that Street Art Africa is an important and innovative book. Yet, its basic excellence needs to be underscored. Waddacar did not dash-off a jumble of personal remarks and "filler" to accompany colorful illustrations. This is a mature and insightful book which opens-up a vital new chapter of the visual arts and its integration with communities all over Africa.

Hopefully, the continent-wide embrace of street art will help the nations and peoples of Africa transcend the artificial, destructive barriers which divide them. More hopefully still, the vibrant street art of Africa will spread its healing power around the globe.

Indeed, several of the artists who appear in Street Art Africa have become major figures on the international art scene. In 2019, Faith XLVII completed a towering mural in Philadelphia. Entitled The Silent Watcher, the mural measures 11,000 square feet, standing 19 stories tall. The "silent watcher" is a young woman whose gentle, caring face looks down with compassion on the neighborhood adjacent to the campus of the University of Pennsylvania.

Faith XLVII's Silent Watcher is a compelling image and so too are most of the pictures appearing on the pages of Cale Waddacor's wondrous book. As I marvel at these photos, I can only hope and say:

Posted by Art Eyewitness at 1:11 PM