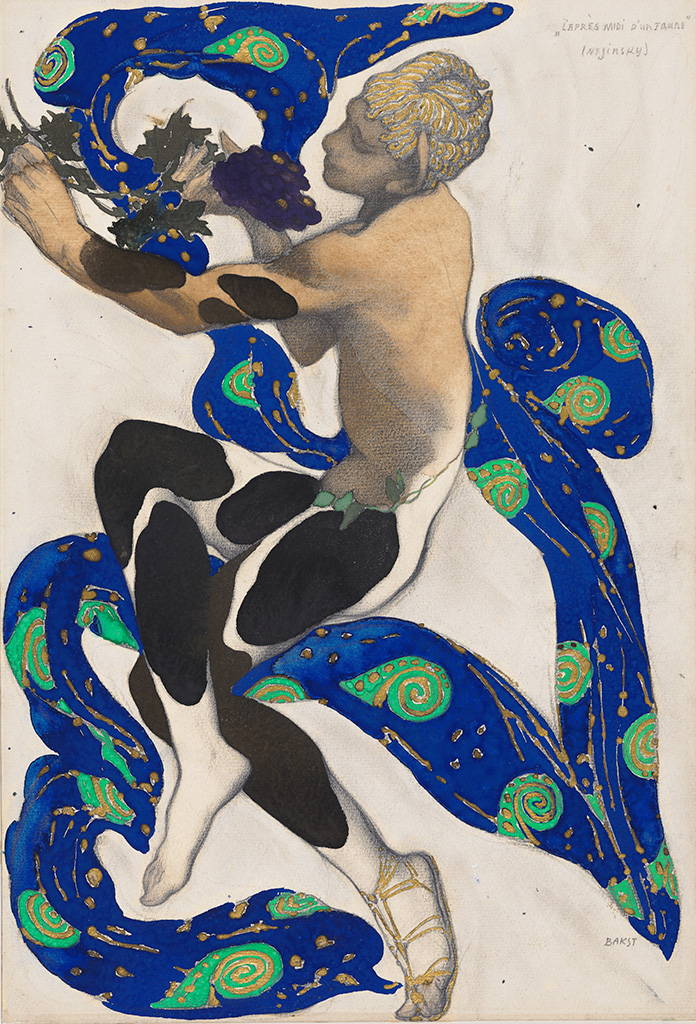 This was the bold, imperious command that Serge Diaghilev gave to the composers, choreographers, dancers and designers of his fabled dance company, the Ballets Russes.

Between 1909 and 1929, Diaghilev and the Ballets Russes did exactly that - they astonished audiences in Europe, the United States and Latin America. The world of dance was liberated from rigid and arbitrary traditions reaching back to the seventeenth century and the era of modern ballet was born.

A spectacular multimedia exhibition detailing this amazing chapter of Modernism is appearing at the National Gallery of Art in Washington D.C. Diaghilev and the Ballets Russes, 1909–1929: When Art Danced with Music features 140 works of art. These are brilliantly coordinated with film clips of modern revivals of Ballets Russes productions. Original costumes and set designs, vintage posters and photographs and paintings and sculptures by Pablo Picasso and Auguste Rodin tell the story of such legendary ballets as Petrushka, The Afternoon of a Faun and Rite of Spring.

The Diaghilev exhibit, extended to run to October 6, 2013, was first presented by the Victoria and Albert Museum in 2010. The V&A has one of the richest collections of Ballets Russes art and artifacts. This is particularly the case of the company's ballet costumes, the star exhibits of this splendid museum presentation.

Serge Diaghilev (1872-1929) conceived his mission as promoting the entire range of Russian culture in the West. His first ventures were music-only programs in 1907 and 1908, along with exhibitions of Russian art which he also curated. Ballet would come later. 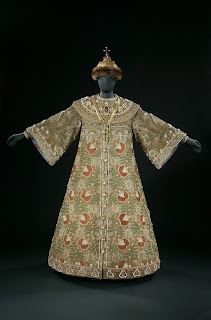 The decision to cut funding for Diaghilev's cultural initiatives, however, was an appalling blunder. Diaghilev, almost single-handedly, had reversed the humiliations suffered by Russia in 1905 with its military defeat by Japan and the "Bloody Sunday" massacre of starving workers outside the Tsar's own palace in St. Petersburg. In less than three years, Diaghilev's public relations triumphs in Western Europe, notably in Paris, had begun to make these self-inflicted wounds seem far less serious than they actually were.


Diaghilev stunned his opponents in the Russian court by proceeding to Paris with an exclusively ballet program in 1909. This was the first "season" of the Ballets Russes, which did not become an independent company until 1911, when the Tsarist regime compounded its stupidity by formally dismissing Diaghilev from the Imperial Ballet. During 1909, Diaghilev employed dancers on summer leave from the Imperial Ballet and used existing musical scores to achieve a cultural breakthrough of immense proportions. 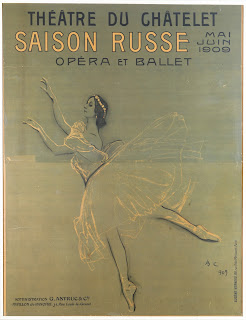 Diaghilev insisted that quality was paramount in every aspect of production, the dance costumes especially. As a result, cost over-runs shadowed the 1909 season with financial ruin. But the magnificent productions of Les Sylphides and the dance of the Polovtsian warriors from Prince Igor left so many "astounded" that nobody seemed to notice the red ink on the financial ledgers.

There was a "smoke and mirrors" aspect to the Ballets Russes that is apparent when one closely examines the ballet costumes in the exhibition.

When you first enter the galleries and scan the costumes from a distance, the effect is breathtaking. This is not unlike the visual effect of attending a performance, though nothing could ever replicate the experience of seeing the Ballets Russes in person. Detailed study of the costumes, however, can be a bit of a let-down when, for instance, you see the abrasions on the sleeves of the Renaissance-style doublet worn by Vaslav Nijinsky in Giselle.

These costumes were working clothes, as Sarah Woodcock makes clear in the insightful chapter on the Ballets Russes wardrobe in the catalog to the exhibition. They were created for moving, dancing, leaping performers - not static display in a museum exhibit.

It's a miracle that any of them have survived at all. Used and reused, very few costumes from the first seasons of the Ballets Russes have been preserved. The classic full-skirted tutu on display from Les Sylphides is from the 1916 season, when the Ballets Russes toured the United States, not the original 1909 season. It owes its preservation to the British ballet historian, Cyril Beaumont, who had received it as a gift from Lydia Lopokova, the ballerina who danced in it in 1916 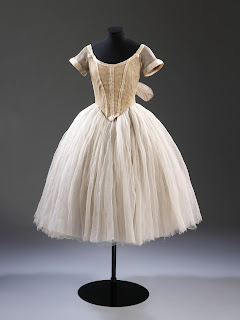 Alexandre Benois
Costume worn by Lydia Lopokova as a Sylph from Les Sylphides, c. 1916
silk and cotton net, with metal armature for the wings
overall: 152 x 85 x 80 cm (59 13/16 x 33 7/16 x 31 1/2 in.)
V&A, London, Cyril Beaumont Bequest
Photo © Victoria and Albert Museum, London
Once the reality - the working lives - of these costumes is accepted, then their status as art objects can be appreciated. Diaghilev employed the premier artists of the early twentieth century to create the magical allure or contemporary ambience he sought, depending on the ballet's theme.

Only the best was good enough for Diaghilev. Alexandre Benois, Léon Bakst, Nicholas Roerich, Pablo Picasso and Coco Chanel, among others, brought unique insights and talents to their collaboration with Diaghilev. They invariably created the effect that Diaghilev wanted -and expected. Whether it was the romanticism of Benois in Les Sylphides, Bakst's sensuality in Scheherazade, Roerich's vibrant evocation of ancient Russia in Rite of Spring, or the hyper-realism of Chanel's "collection" for The Blue Train, the costume and set designs were indisputable works of art.

The transition from costume design to Ballets Russes performance is readily apparent in items on display from The Spirit of the Rose. Léon Bakst designed the ethereal, enchanting costume worn by Vaslav Nijinsky to evoke the fragrance of  a rose brought back by a young girl from her first dance. From the photo of Nijinsky in 1911, we can see that Bakst succeeded. But the costume, fragile by its very nature, was worn to shreds. 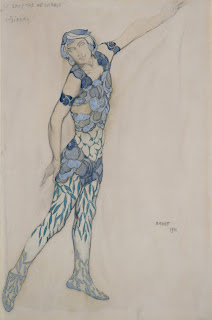 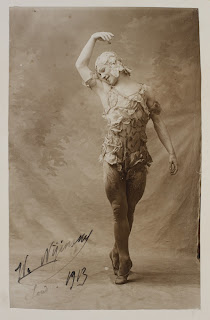 
According to ballet legend, Nijinsky's servant made a small fortune selling silk petals from the costume to fans of the great ballet star. The example on view dates from 1922 when it was worn in a post-war revival by Stanislas Idzikowski, also a great dancer of Polish-descent - but no Nijinsky. 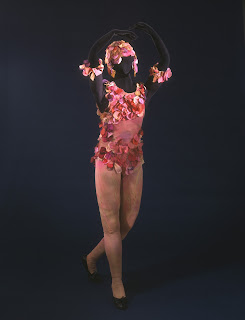 Léon Bakst
Costume for the Rose from The Spirit of the Rose, designed in 1911, fabricated 1922
silk, velvet and elastic
Wadsworth Atheneum Museum of Art, Hartford, CT, The J. Herbert Callister Fund, the Florence Paull Berger Fund, the Costume and Textile Purchase Fund, and the Costume and Textile Flood Fund.
The Ballets Russes produced a revolution in movement. One of the less striking objects in the exhibition provides insight into the tremendous concentration that went into the planning and preparation for the Ballets Russes programs. This is series of sketches, by Valentine Hugo, of Nijinsky performing in Petrushka. Each of these scenes had to be meticulously choreographed, rigorously practiced and executed to perfection. The sets evoked the atmosphere of a winter festival in old Russia, as did the costumes. These, however, had to be designed to permit the necessary mobility of the modern-style dance movements that the Ballets Russes pioneered. 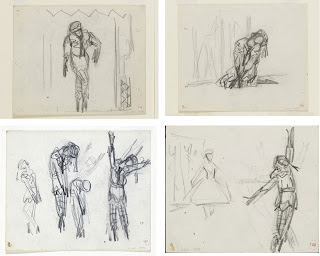 Valentine Hugo
Vaslav Nijinsky in title role from Petrushka, 1911
pencil on paper
41.5 x 56.7 cm (16 5/16 x 22 5/16 in.)
V&A, London, Gift of Jean Hugo
Diaghilev possessed an intuitive grasp of popular taste that complemented his absolute dedication to perfection. He was well aware that throughout the nineteenth century, Europe had repeatedly embraced cultural imports from all points of the compass as an antidote to bourgeois conventionality. Diaghilev realized that if he could find a way to make the "primitive" aspects of Russia's Slavic heritage appeal to the European appetite for the exotic, the finances of the Ballets Russes would leap into the profit column.

Sets, costumes and dance needed one final component to achieve that goal. Music - original scores by hand-picked composers - was the final ingredient in Diaghilev's recipe for success. Earlier in his career, Diaghilev had worked with the great Russian composer, Nikolai Rimsky-Korsakov, who was also an ardent Russian nationalist. One of Rimsky-Korsakov's protégés was a student of Russian folk music, as well as a gifted young composer. Igor Stravinsky and the three ballets he composed for Diaghilev - The Firebird, Petrushka and Rite of Spring- gave the Ballets Russes the kind of music that would make Russia's ancient, mythic past come alive for audiences in the West. 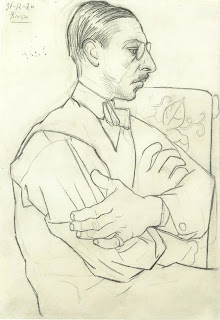 Pablo Picasso
Igor Stravinsky, Paris, December 31, 1920
pencil on paper
34.29 23.5 cm (13 1/2 9 1/4 in.)framed: 58.42 48.26 4.76 cm (23 19 1 7/8 in.)
Private collection
Thanks to the exhibition’s incorporation of film clips of modern revivals of Ballets Russes classics, we are able to grasp why ballet enthusiasts applauded Firebird and Petrushka and why Rite of Spring created such a furor. This succès de scandale evidently did not surprise Diaghilev, but Rite of Spring has not lost its capacity to shock a century after it was first performed.

Rite of Spring depicts the sacrificial death of a young maiden in pre-Christian Russia. It premiered in Paris on May 29, 1913, detonating a riot in the theater and endless theories on why audiences reacted with such violent emotion. Was it an uncharacteristic misstep by Diaghilev who miscalculated the degree of avant-garde experimentation that audiences were willing to accept? Or did Rite of Spring touch a raw nerve among people who were aware of the approach of war and the sacrifice of a generation of young men in equally senseless slaughter?

There may be no such thing as bad publicity, but the inordinate attention given to Rite of Spring and the personal estrangement between Diaghilev and Nijinsky has obscured the trials and tribulations that haunted the Ballets Russes in its post-Rite of Spring seasons. 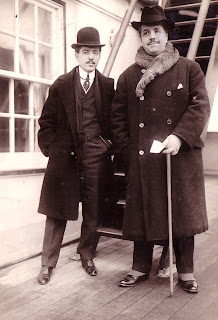 ﻿
Diaghilev and John Brown, New York, 1916photograph by Bain News Service
10.16 15.24 cm (4 6 in.)
Collection of Ms. Anna and Mr. Leonid Winestein
There was no discernible pattern to this. Diaghilev, aware of the widespread yearning for a return to classicism following the First World War, staged one of the great works of the nineteenth century Imperial Ballet, The Sleeping Princess, in 1921. The music was by Tchaikovsky, reworked by Stravinsky, and Nijinsky’s sister, Bronislava, updated the choreography. The costumes by Léon Bakst were among the most stunning ever worn by Ballets Russes dancers, who were at the top of their form for this ballet. The premiere was set for London in November 1921, perfectly timed for the holiday season. Yet, The Sleeping Princess was a disaster. The production received mixed reviews and ballet enthusiasts failed to appear. Diaghilev, bankrupt and humiliated, left England with the sets and costumes impounded by his creditors.
One of the most notable features of this great exhibition is the almost complete absence of personal effects from Diaghilev himself. A virtual exile from the nation he loved – before and after the Bolshevik Revolution of 1917 – Diaghilev had no home to call his own. He lived in a succession of hotels, whether the Ballets Russes was touring or not. Even Diaghilev’s last resting place was not his own. His funeral and burial in Venice in 1929 was paid for by his friends, including Coco Chanel.
Diaghilev’s legacy is a different matter. Not only did he succeed in his self-appointed task of raising the appreciation of Russian culture throughout the world, but he was a patron and champion of artists, musicians, dancers and writers in the formative stages of the rise of Modernism. Picasso, Matisse, Stravinsky, Cocteau are but a few of the great figures of twentieth century culture who received career-sustaining support from Diaghilev.
Gazing on the wonderful treasures on view in Diaghilev and the Ballets Russes, one is reminded of the Latin inscription on the memorial to Sir Christopher Wren in St. Paul’s Cathedral. The words are singularly appropriate to Serge Diaghilev as well:
Reader, if you seek his memorial – look around you.
Images courtesy of the National Gallery of Art

Posted by Art Eyewitness at 5:38 PM