Medieval Masterpieces from Germany at the Metropolitan Museum of Art 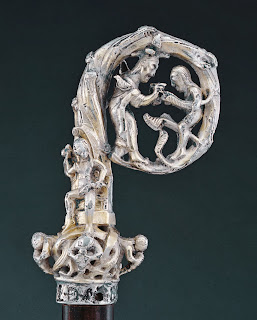 The exhibition of German art works from the Middle Ages now on view at the Metropolitan Museum of Art in New York City both inspires and confounds the expectations of viewers. Are these precious objects relics of the great Age of Christian Faith? Or are these strange and wonderful artifacts survivors from a remote pagan past, barbaric in spirit beneath a thin veneer of Christian piety?

Medieval Treasures from Hildesheim presents 50 masterpieces from the cathedral and monastery of Hildesheim, an ecclesiastical site of major importance. Here, in this city in Lower Saxony, Bishop Bernward of Hildesheim (960–1022) launched bold programs of church building and the creation of Christian art that rank among the most influential of the Middle Ages. Bernward deserves to be remembered along with Abbot Suger (1081-1151) as one of the pioneering patrons of the arts in what was truly a renaissance before The Renaissance.

The great age of church and cathedral building began after the year 1000 A.D., which many had dreaded as the onset of the Apocalypse. The lavish spending on ecclesiastical buildings during the Middle Ages was not without its critics. Where forward-thinking prelates like Bernward saw the impressive new churches and monasteries as reflections of the Heavenly City, others held different opinions.

In a foreshadowing of the Reformation of the 1500's, Bernard of Clairvaux (1090-1153) condemned the kind of gilded reliquaries and ornate candlesticks that are on display in the Hildesheim exhibit at the Metropolitan Museum:

"Oh vanity of vanities, but no more vain than insane! The church is radiant in its walls and destitute in its poor. It dresses its stones in gold and abandons its children naked. It serves the eyes of the rich at the expense of the poor."

Both Bernard of Clairvaux and Bernward of Hildesheim are recognized as saints in the Roman Catholic Church. Though separated by nearly a century, the two churchmen, one French, the other German, had much in common. Both served as advisers and confidantes of kings. Bernard's puritanical zeal and Bernward's progressive vision reflect a duality in Christendom that stretches back to antiquity.

In Bernward's case, he was chaplain and tutor to the short-lived Emperor Otto III, 980-1002. The Ottonian Dynasty, Saxons by birth, revived the Holy Roman Empire of Charlemagne that had largely disintegrated after his death in 814. The Ottonian rulers looked to expand Christian (and German) power eastward and to exert political power in Italy.

Capable religious leaders like Bernward were essential to the dynastic agenda of the Ottonian rulers. The influential role of bishops and the heads of orders of monks and priests was symbolized by the ceremonial shepherd's staff that they carried. An example on display is the remarkable Crosier of Abbot Erkanbald, a striking statement of ecclesiastical authority. Church leaders during the eleventh century, of whom Bishop Bernward was a noteworthy example, were men to be reckoned with.

The world view and social position of Bernward served as the foundation for his church building. It infused his enthusiastic patronage of art as a means of conveying the truths of religion, as well. This is immediately apparent in the two extraordinary objects that greet visitors to the Hildesheim exhibit at the Metropolitan Museum.

The first is the monumental Baptismal Font, cast in copper alloy in the early thirteenth century. The Baptismal Font displays biblical scenes in bold relief and remarkable narrative power. Each has a water theme - the baptism of Jesus, Moses' crossing of the Red Sea, the transport of the Ark of the Covenant across the River Jordan and the dedication of the font itself. The massive vessel is supported by four figures which represent rivers mentioned in the Bible, the Tigris, the Euphrates, the Pishon and the Gihon. 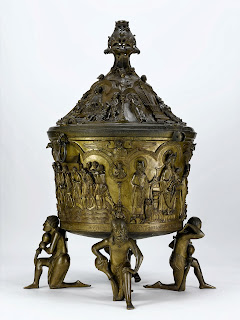 A stunning masterpiece in its own right, the Baptismal Font evokes the great bronze doors which Bernward originally commissioned for St. Michael's, the church of the Benedictine Order in Hildesheim. The massive doors, measuring 16 feet, 6 inches high, solid cast, are adorned by eight scenes from the Old Testament on one door, eight New Testament scenes on the other.

After seeing the ancient Roman war monument, Trajan's Column, Bernward also ordered a similar column to be cast around 1000 A.D. Instead of battle scenes in bas relief, Bernward's column depicts twenty-eight episodes from the life of Jesus swirling upward with cinematic dynamism.

There are some disturbing nuances in Bernward's Column, given the aggressive efforts of the Ottonian dynasty to invest itself with the trappings of Roman imperialism. Bernward's Column is too closely modeled after Trajan's to escape suspicion that it too is a monument to power politics. But no such charge could be leveled against the Ringelheim Crucifix.

It is commonly believed that Bernward commissioned the carving of this magnificent crucifix for the convent where his sister, Judith, was abbess. In a brilliant design decision, the Metropolitan curators have displayed the Ringelheim Crucifix on a cross-shaped partition immediately visible as one approaches the exhibition. The Ringelheim Crucifix looms over the shimmering display cases with their gilded reliquaries and gem-studded manuscript covers. The effect is profound. 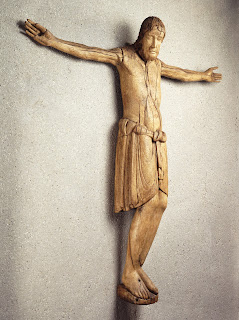 Ringelheim Crucifix
The Ringelheim Crucifix was carved from linden wood, the favored medium of great German carvers down to Tilman Riemenschneider, during the 1500's. The arms, though, are a later addition, replacements made of oak. During restoration in the years 1949-52, a cavity was discovered in the head where several relics had been stored. A note on parchment signed by Bernward himself identified two stones as coming from the Holy Sepulcher in Jerusalem, along with bone fragments from two saints. But amazing as this discovery is, nothing can match the sense of spiritual power of the Ringelheim Crucifix, one of the earliest surviving three-dimensional works of art from the Christian Middle Ages.

The Ringelheim Crucifix manifests the raw, powerful convictions of the Christian populations of Western Europe, still only a few generations from the time of their conversion. If the Ringelheim Crucifix exudes the "faith of the convert," the exquisite Bernward Cross, which dates to Bernward's era, points to the growing sophistication of that faith. Likewise, the gilded Hezilo Cross, used in processions, is evidence of the growing wealth and worldliness of the Christian clergy.

Before we endorse Bernard of Clairvaux's zealotry at the expense of Bernward's pragmatic approach to religion, one should take a closer look at the silver Bernward Cross. The figure of the crucified Jesus depicts him as a tortured martyr, head slumped and skeletal rib-cage clearly visible even on such a small scale. Here we see the dying, Good Friday Jesus. 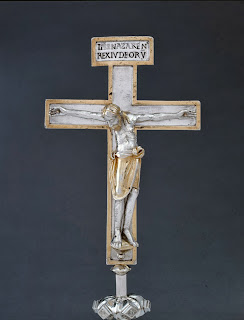 This image of the death of Jesus on the cross so shocked early Christians that for the first five hundred years or more of their religion, few depictions of the crucifixion were created. But people of Bernward's generation embraced images of both the suffering Jesus and the transcendent Christ of the Ringelheim Crucifix. And human nature being what it is, it should not surprise us that Christians of Medieval Europe, whose "barbarian" ancestors exulted in objects "rich in gold," should also have paraded around with the glittering Hezilo Cross, encrusted with semi-precious gems and rock crystals. Later "reformers" like Bernard of Clairvaux and Martin Luther would condemn such objects. To most Christian believers during the Middle Ages, however, the Hezilo Cross was a symbol of devotion.

The discovery of the relics inside the head of the Ringelheim Crucifix, mundane chips of stone and bone though they seem to modern eyes, points to the Christian cult of relics. Impressive for engendering piety and belief among the faithful, the cult of relics was also the keystone of vast financial transactions to the Church. The monarchs and nobles of Europe donated lands and revenue to build pilgrimage shrines to safeguard these - often dubious - body fragments and personal objects reputed to have belonged to Jesus, the Virgin Mary and Christian martyrs. 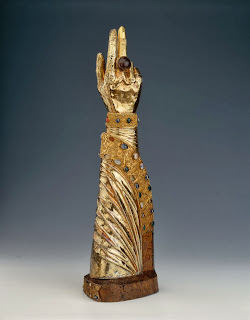 The Metropolitan exhibit displays several containers or reliquaries for relics. In the case of the silver, arm-shaped reliquary, skillfully cast to show the hem of a bishop's robe, we can be reasonably certain that it contained body parts of Bernward, raised to the rank of sainthood in 1193. But the identity of the skull in the reliquary of St. Oswald is open to question. 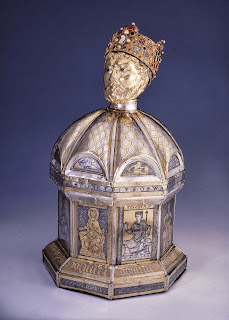 Reliquary of St. Oswald
There were at least four skulls of St. Oswald lovingly preserved in reliquaries throughout Europe. The most likely candidate was the one in Durham Cathedral in northern England. Oswald had been one of the earliest Anglo-Saxon rulers to embrace Christianity. But Oswald had converted for the same reason that the Emperor Constantine had in the fourth century. Oswald felt that the Christian god would aid him in his military campaigns. For a time, his plan seemed to be working - until he fought one battle too many and was killed fighting the pagan Mercians in 642.

The exultant Mercians displayed Oswald's severed head on a wooden stake as a battle trophy. Later retrieved, it was placed for safe-keeping in a church in Durham. By the time this bizarre reliquary was created, around 1185, Oswald was venerated as a Christian martyr. This was also the era of King Richard the Lionhearted and the Crusades. Oswald had become a model saint for Church leaders, like Bernard of Clairvaux, preaching "Holy War" against Islam.

The ominous implications of events and Church policies in Bernward's time in the early eleventh century should not detract from his achievements. We should not judge the piety of medieval religious books - or that of the clergymen who commissioned them - by the lavish decoration of their covers. 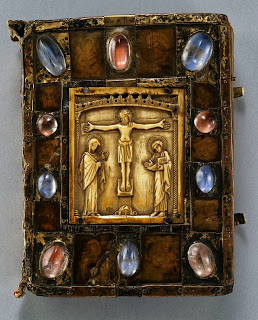 Small Bernward Gospel
The Reichenau Lectionary, created during the last years of Bernward's life and the so-called Small Bernward Gospel, which dates from a century after his death, are both testaments to a deep and abiding faith. The Reichenau Lectionary, used in church services, presents a charming and heart-moving depiction of the death of the Virgin Mary, with angels swooping down to escort her to heaven. And the gems and rock crystal on the cover of the Small Bernward Gospel should not distract our attention from the carved ivory plaque on the cover depicting the Crucifixion. This was an especially precious object, a gift very likely from the Byzantine court in Constantinople. 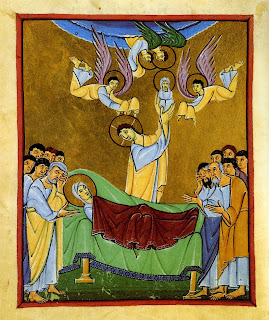 Reichenau Lectionary
Yet this wonderful exhibit at the Metropolitan Museum produces an unsettling effect, difficult to define. Is it due to the sheer amount of gleaming gold and silver artifacts in the small space of the single gallery displaying Medieval Treasures from Hildesheim? Or is this vague uncertainty caused by the evidence of so much religious piety in a society vastly different from our own?

Whatever the answer, it is hard not to be impressed with the life and the legacy of the clergyman who was responsible for the creation of so many of these medieval treasures. As Bernward's biographer said of him, "There was nothing in the fields of the arts that Bernward did not try, even when he was not able to bring it to completion."


Images courtesy of the Metropolitan Museum of Art

Posted by Art Eyewitness at 9:59 AM