The Plains Indians, Artists of Earth and Sky at the Metropolitan Museum of Art 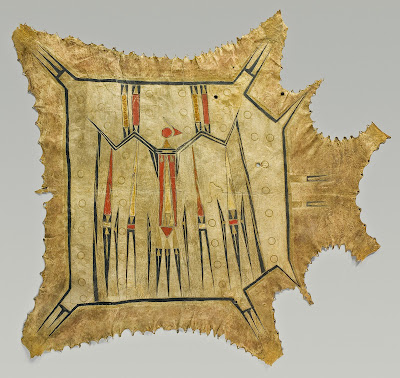 The Plains Indians, Artists of Earth and Sky


The Plains Indians, Artists of Earth and Sky, now on view at the Metropolitan Museum of Art, is a religious experience as well as an art exhibit. Like last year's tour de force at the Met, Lost Kingdoms: Hindu-Buddhist Sculpture of Early Southeast Asia, the boundaries between art and spirituality are almost totally erased by this powerful display of Native American creativity.


The Plains Indians, Artists of Earth and Sky presents stunning examples of Native American art from the early 1700's to the twenty-first century. These singular works show how Native American art is infused by an acute sensitivity to the guiding influence of the Great Spirit or Wakan Tanka, in the language of the Lakota Sioux.


At the heart of Native American spirituality lies the vision quest. Almost all the Native  American peoples practiced some form of a "right of passage" through which an individual gains insight into the spiritual realm. This could be achieved by undergoing a solitary journey into the wilderness or taking part in a ceremonial ordeal marked by extreme physical privation or suffering.


The Lakota Sioux call their version of this sacred, sacrificial rite the Wi wanyang wacipi or "sun gazing dance."  The resulting vision or communion with Wakan Tanka brings wisdom that will enrich the life of the Sun Dancer and of his family and community.


There are a number of powerful works of art directly related to the theme of vision quest in The Plains Indians, Artists of Earth and Sky. Several decorated shirts like the one worn by the great Lakota chief, Red Cloud, are on display. These are badges of special status, conferred on the wearer in recognition of his spiritual enlightenment or prowess in hunting or warfare. 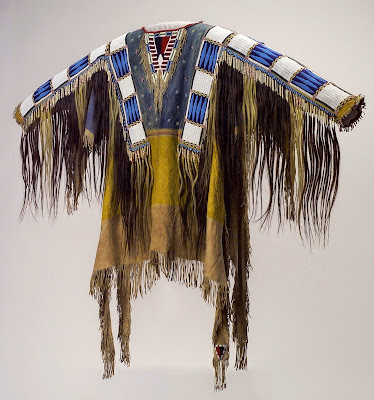 Only members of the Lakota elite group known as the Wicasasyatampi or "praiseworthy men" were honored with such beautiful garments. These "shirt wearers" were selected by the seven leading chiefs of the Lakota for their valor and wisdom. The shirt is ornamented with beadwork symbolizing the stars and the sun. The fringe of locks of hair were gifts from friends, though scalps of fallen enemies were sometimes used.


Red Cloud's shirt was especially elegant in design. Other honorific shirts were more roughly stitched together from the tanned hides of buffalo or antelope to "preserve the identity and some of the animals' spiritual power..."


The cult of courage and vision quest wisdom was universally esteemed among the tribes of the Great Plains. Magnificent garments like Red Cloud's shirt were presented in expectation of future deeds as well as past achievements. The companion volume to the exhibit notes that the burden of leadership was something that Native Americans felt all too keenly:


Many men declined to make use of their rights to such a prestigious shirt, as they were afraid of ridicule if they did not live up to the expectations of great courage and generosity that came with such an honor.


The great warriors, "Patriot Chiefs" as the noted historian Alvin Josephy called them, suffered a high casualty rate in the frontier wars with the U.S. Army - and afterward. Crazy Horse, "bravest of the brave" Lakota, was brutally bayoneted to death shortly after surrendering to the U.S. military in 1877. In 1890, Sitting Bull - who had had a visionary dream shortly before the Battle of the Little Big Horn - was shot and killed by members of a police unit recruited from other Native Americans.


This tragic legacy is exemplified by the "ledger" drawing made by a young Kiowa named Wohaw, who was imprisoned in Fort Marion, Florida, from 1875 to 1878.  Ledger art, made on common stationary, is a primary record of Native American history.


Wohaw fought under the leadership of White Horse, a Kiowa chief who was also sent to Fort Marion for leading raids on settlements and cattle ranches in Texas. The Kiowas, along with many other incarcerated Native Americans, illustrated tribal history to occupy their time. In an unexpected turn-of-events, Indian ledger art became popular with White collectors, among the first wave of tourists to Florida. Wohaw and his fellow prisoners began selling their art to raise funds to support families now living on U.S. Government reservations, two dollars a drawing. 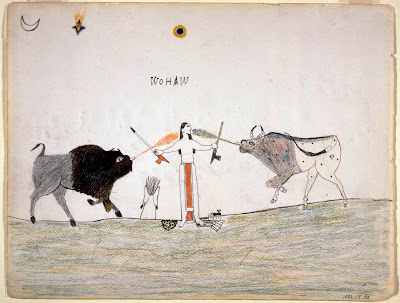 Wohaw, A Man Receiving Power from Two Spirit Animals, 1877
Wohaw's drawing shows a warrior, stripped to his loin cloth, offering gift pipes to guides from the Spirit world. They appear in the shape of a buffalo and a longhorn bull, both powerful animals on the Southern Plains, where the Kiowa and their Comanche allies had been the dominant tribes since the introduction of the horse in the early 1700's. The two spirit animals breathe their "medicine" onto the young warrior while the moon, sun and a comet appear in the sky overhead.


At the young mans' feet are representations of an Indian tipi and a ranch house.  Wohaw's drawing shows the Kiowa warrior poised between two worlds, the nomadic, buffalo hunting past and the "white man's way." But the Great Spirit has insured the survival of Wohaw and his people.


The presence of the gift pipes in Wohaw’s drawing hearkens to the first work of art displayed in the Metropolitan exhibit. This is a human effigy pipe, dating from 100 B.C. to 100 A.D. Created during the extraordinary “Mound Builder” epoch, this carved stone pipe from the Ohio River valley testifies to the ancient roots of Native American culture. Essential rites such as peace offerings of tobacco pipes transcended vast stretches of time and space long before the arrival of European intruders. 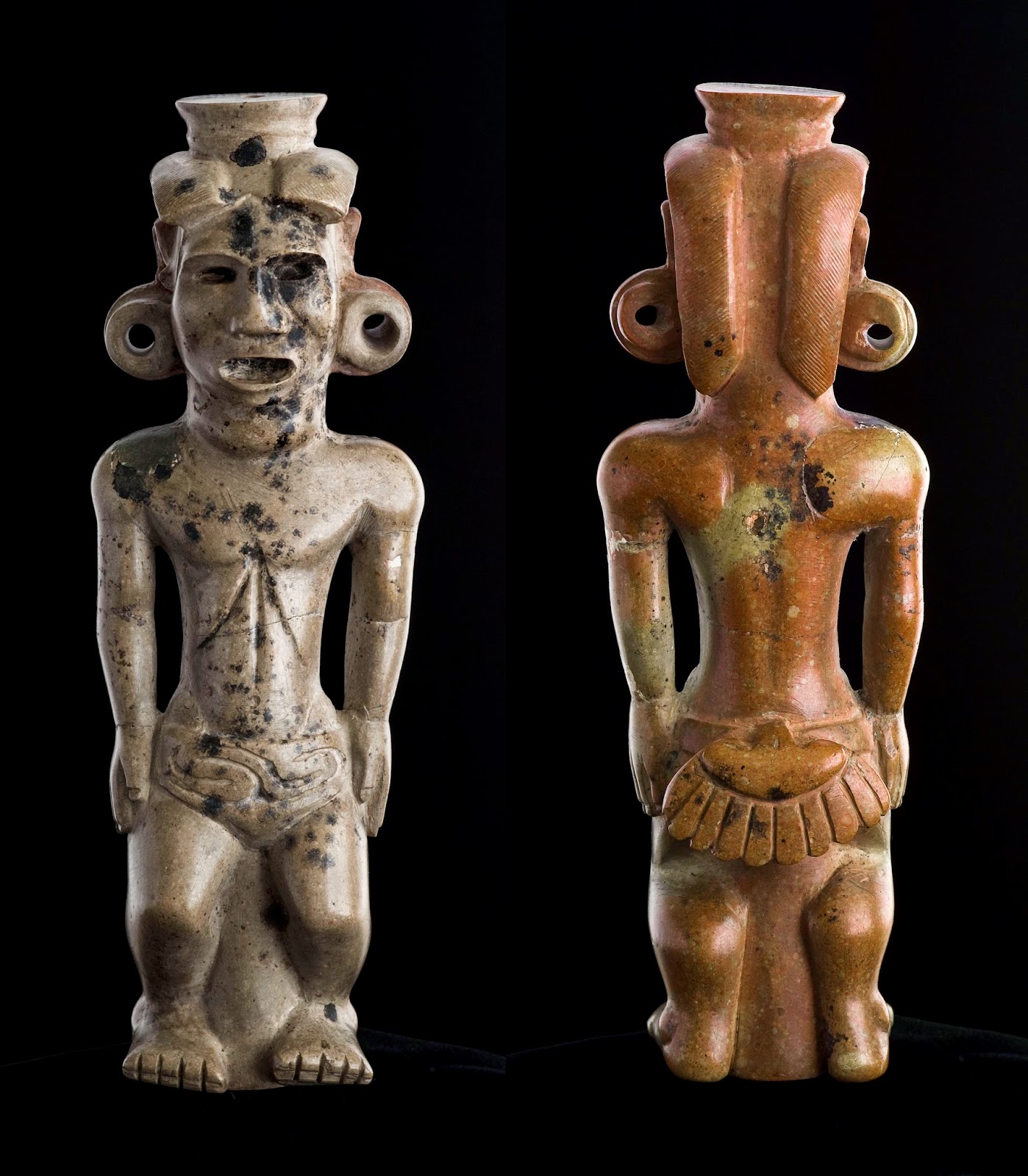 
Horses galloped on to the Great Plains as a result of the 1680 overthrow of the Spanish colony of New Mexico by the Pueblo people. Horses brought by the Spanish escaped or were seized by the Pueblos. By trade, capture or the spread of wild pony herds, the horse moved onto the Southern Plains and then northward. The nomadic, buffalo-hunting culture of the Plains tribes took hold of the vast region’s economy – and the world’s imagination.


The original inhabitants of the Great Plains had hunted buffalo on foot, a dangerous and exhausting endeavor. These tribes, the Mandan, Arikara and Pawnees were primarily agricultural societies, living along the Missouri and Platte Rivers. They too seized the opportunity of enhanced hunting thanks to the horse. But arriving around the same time were other exports from Europe – guns, trade beads, iron axes and knives and small pox.


The diseases unknowingly introduced by the Europeans hit the Mandan and Arikara villages with devastating effect. The more nomadic tribes were initially spared, so that the Lakota were able to gain dominance over the Northern Plains. Warfare to control the buffalo hunting grounds became an endemic feature of life on the Great Plains during the 1700’s and early 1800’s.


Native American art and artifacts from the Great Plains during the 1700’s are rare items in U.S. museum collections. By a fortunate turn of events, a significant number of precious examples of Plains Indian art were sent back to Europe by the early explorers.


French missionaries and traders were particularly attentive to documenting their travels through the Great Plains with souvenir artifacts. Many of these are now in the collection of the Musée du quai Branly, the great anthropological museum in Paris. It was the Musée du quai Branly which originally proposed the idea for this great exhibition, collaborating with the Nelson Atkins Museum in Kansas City, Missouri, and the Metropolitan Museum of Art.


Among the most outstanding art works from the Musée du quai Branly are several tanned leather buffalo hides or "robes" which Native American artists utilized to paint their masterpieces. The Robe with Mythic Bird, dating 1700 to1740, is the greatest of these, though it raises a number of interpretive questions. Artifacts decorated with abstract designs were usually created by Native American women, so this outstanding piece may have been the work of a woman artist. 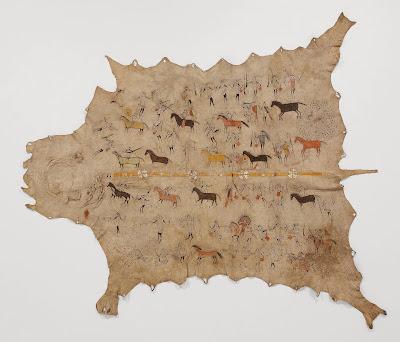 Pictograph paintings of warriors locked in combat were an important theme of Plains Indian art. Male artists were almost always the creators of these works. Like European naval and military painters of the same period, details of guns, weapons and warlike regalia were always scrupulously depicted. Though hardly inspiring in the same way as The Robe with Mythic Bird, the battle painting shown here vividly illustrates the "arms race" that accompanied the arrival of the horse on the Great Plains during the 1700's.


During the late eighteenth century, it must have seemed that the hard-riding, buffalo hunting lifestyle of the Plains tribes would endure forever. Objects of everyday use, like Cheyenne pouch or parfleche envelope, for carrying dried food, were designed and decorated with great artistry. 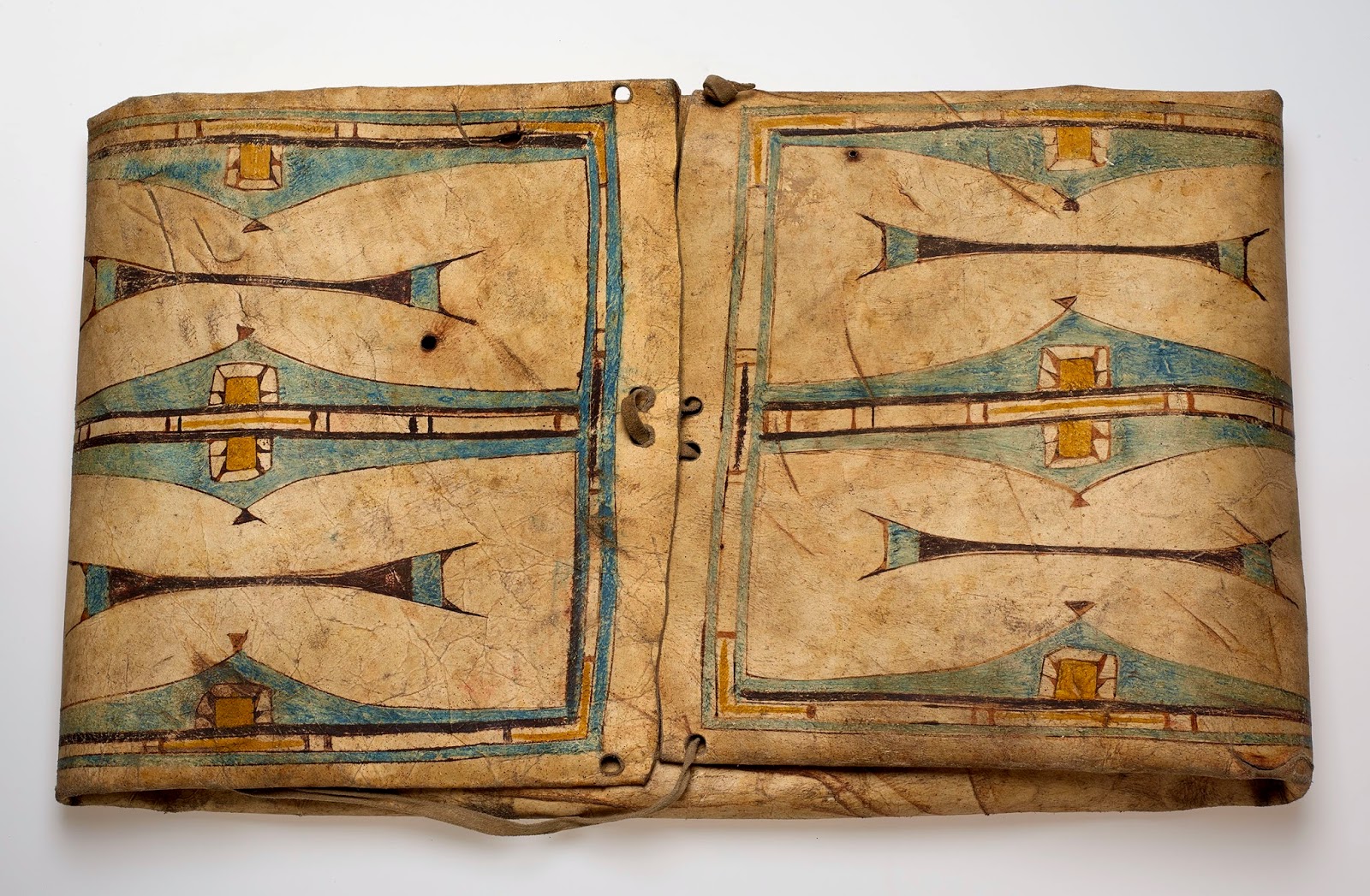 The "golden age" of the Plains Indians was destined to be brief. In 1803, the United States purchased Louisiana from France. This real estate deal brought the windfall of the Great Plains region under the jurisdiction of the U.S. Government. Nobody in Paris or Washington consulted the Native American tribes who actually lived on the Great Plains. The downfall of the Plains tribes, symbolized by the 1890 massacre at Wounded Knee, South Dakota, was sealed by an act of geopolitical duplicity against which they struggled for nearly a century with tragic, unavailing courage.


There are a number of artifacts which illustrate the eventual loss of Native American independence. Ledger art, like Wohaw's drawing, is an important part of this part of the exhibition. So too are battle shields made from buffalo hide. Tough enough to deflect an arrow, shields like this one made by an Arikara warrior around 1850 offered no protection against the bullets of a Sharps Rifle. 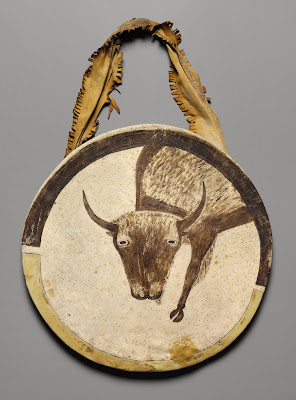 One of the most beautiful art works on view in the Metropolitan exhibit cannot be displayed here. This is woman's dress from the Arapaho tribe, made from tanned hide and painted red with cosmic symbols such as the Thunderbird, magpie and the turtle who supports the earth on its shell.


This dress was used in the Ghost Dance religious revival of 1890 and is truly a sacred object, worthy of reverence by people of all religious beliefs and convictions. I spent several moments of reflection standing in the presence of this Ghost Dance dress and was deeply moved. 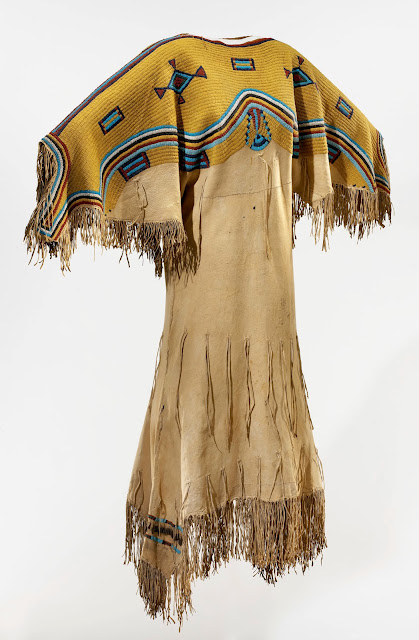 Woman’s Dress, c. 1865
Some idea of the power of the Ghost Dance dress can be gained by studying a Lakota woman's dress from 1865 and contrasting it with the modern-day version worn by the note Native American dancer and political activist, Jodi Archambault Gillette We can see Gillette's dress as an evolution from the simplicity and strength of the earlier Lakota dress, incorporating symbols and motifs of all the Native American peoples of the Great Plains. 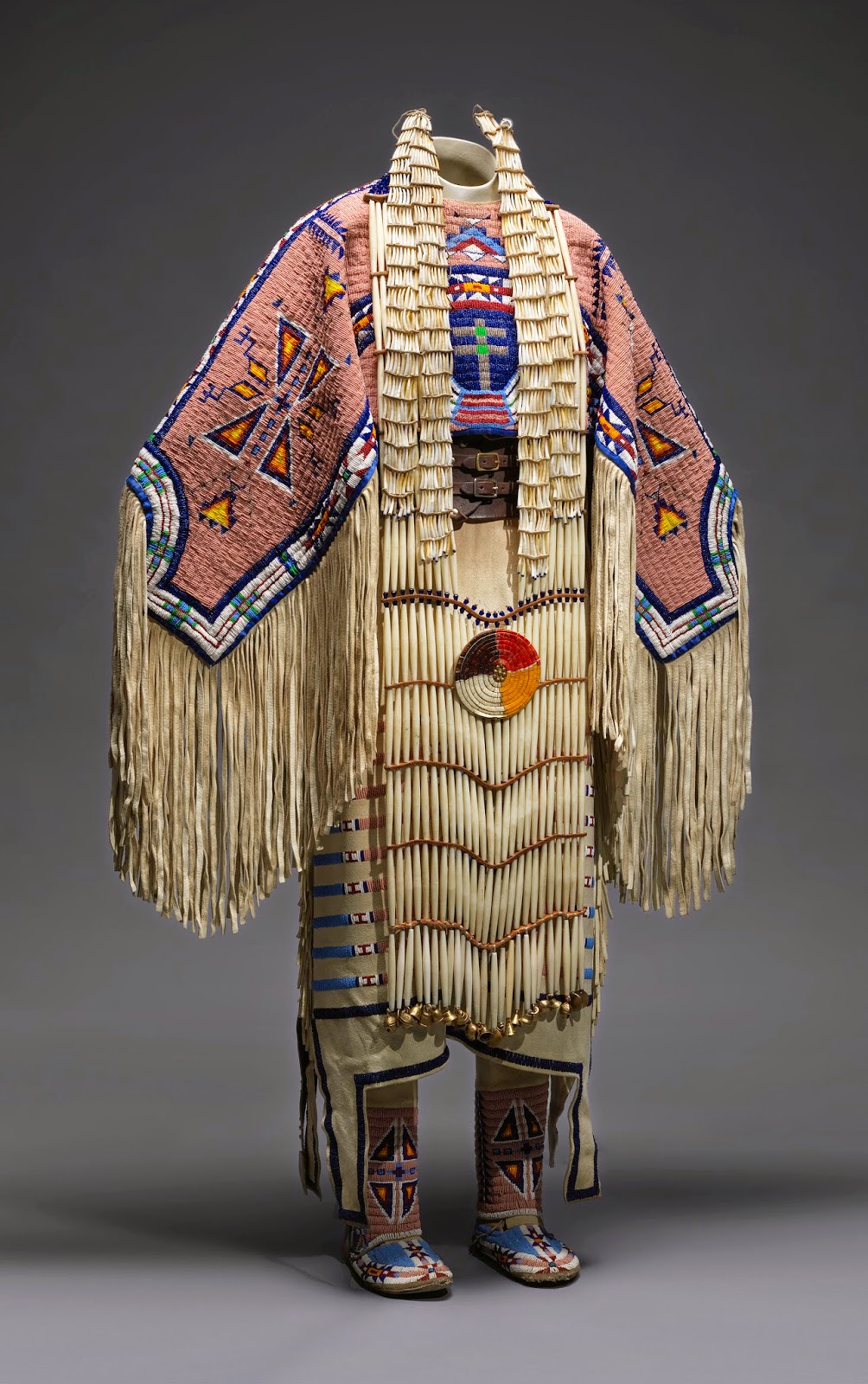 Jodi Gillette, Woman’s Dress and Accessories, 2005
﻿
The concluding galleries of The Plains Indians, Artists of Earth and Sky display many other modern works of art like Gillette’s dress. These works are examples of a living tradition, which grows in strength, confounding earlier expectations that American Indians could only survive through assimilation. 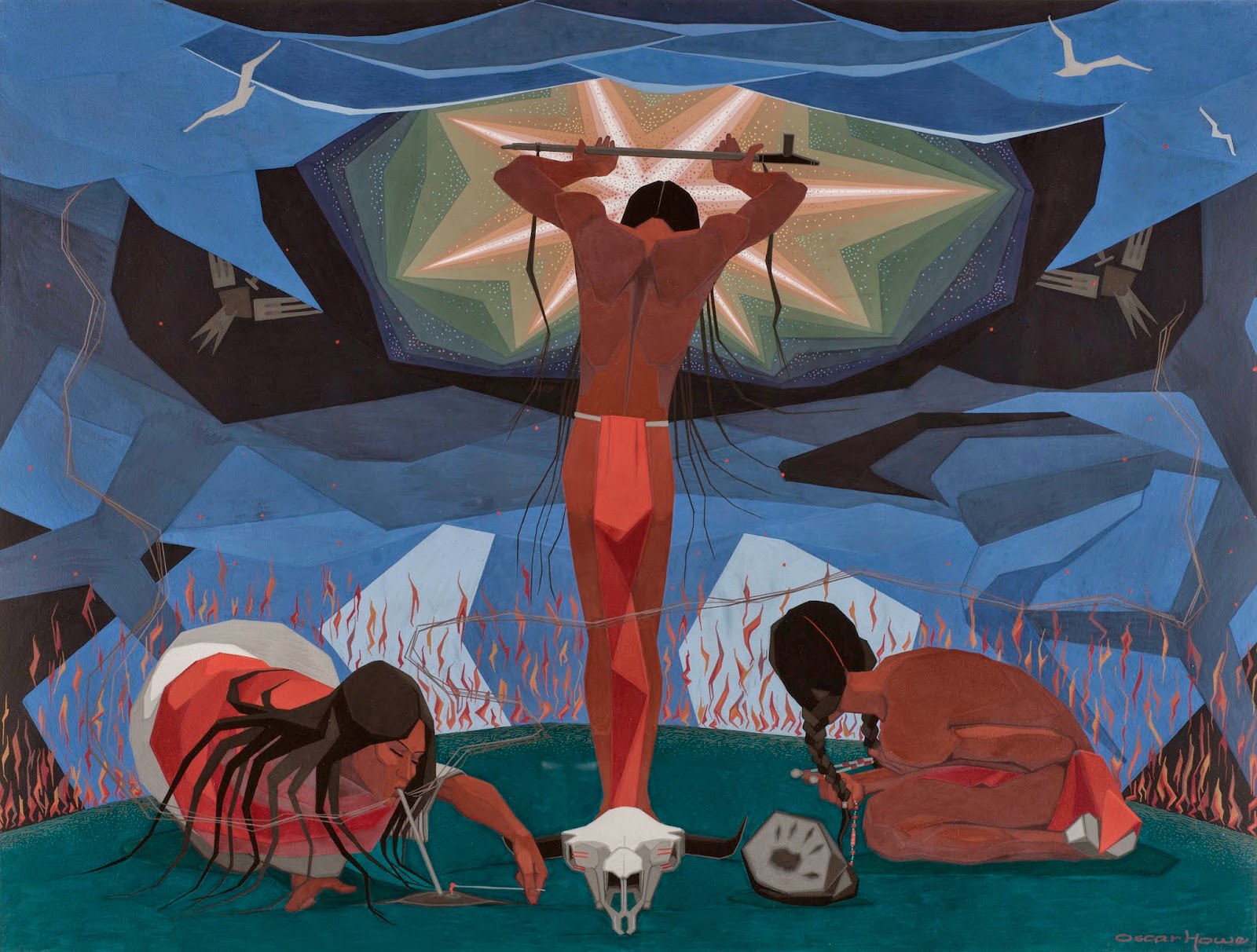 The powerful  1962 painting, Calling on Wakan Tanka, by Oscar Howe testifies to the unconquerable spirit of Native American artists. Howe (1915-1983), a member of the Yanktoni Dakota tribe, worked as an artist in the Depression-era Works Progress Administration. Howe rebelled against the stereotypes and expectations assigned to Native Americans. He embraced elements of Modernism, combining motifs from Christianity and Native American culture, to show that the Wi wanyang wacipi , the "sun gazing dance, " is part of the global vision of humankind.

Posted by Art Eyewitness at 1:19 PM