Dave Heath Photo Exhibit at the Philadelphia Museum of Art 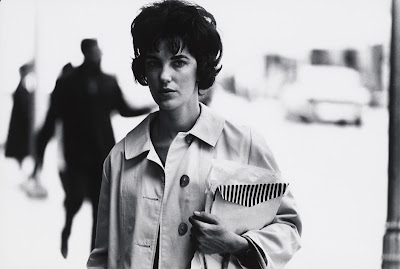 The Philadelphia Museum of Art

It is a rare person who does not experience a "Hamlet moment" once in a while. Life certainly presents us with many occasions amid our daily "sea of troubles" to question the meaning of existence.

Such moments are vital to the new exhibit at the Philadelphia Museum of Art, Multitude, Solitude: The Photographs of Dave Heath. The exhibition examines how a gifted artist, Dave Heath, turned his personal reflections into a classic book of "street" photography. The majority of these poignant, powerful images come from the photo collection of the Nelson-Atkins Museum of Art in Kansas City, Missouri.

Dave Heath is a Philadelphia-born photographer now living, teaching and working in Canada. Heath's early years inflicted experiences of pain and rejection upon him that might have driven other souls to despair. Instead, as a young man, Heath discovered photography.

Heath was influenced by the great LIFE magazine photographer, W. Eugene Smith, who was a master of the photo essay. Heath became quite skilled in the placement of photos to create a mood to better appreciate these images. Yet it is vital to appreciate that in the composition of these photos, Heath avoided overt story-telling. There are no "poses" in Heath's photos, no attempt to frame a message.

The curator of the exhibition, Keith F. Davis of the Nelson-Atkins Museum of Art in Kansas City, Missouri, addressed the fact that there is "little extraneous information" in Heath's photos. Heath, Davis explained in his remarks at the exhibition opening, focused away from the details of day-to-day existence to reach "poetic realms." 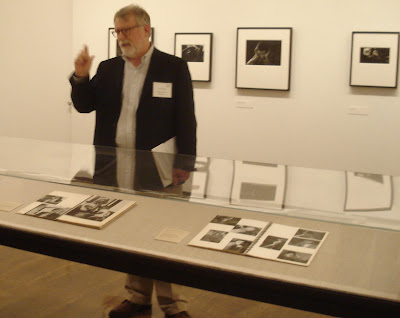 That did not entail ignoring pain, loneliness or alienation - all of which were very much present in the American "Mid-Century." The key element to Dave Heath's photos, Davis reiterated, was the way that these indelible images evoke "primal, visceral sensibility."

During the 1950's and 1960's, Heath took on the dual role of "man in the street" and wandering artist. From his military service in Korea in 1953-54 to an epic bus journey across the U.S. in 1964, Heath interacted with the world through the lens of his camera. Wisely, he let the world do most of the talking.

Heath's photos also require an enlightened level of listening. Before we impart our own interpretation of what is the "meaning" of the picture, we need to listen to what it says. Often our best reply is to remain silent.

A particularly good example is an early photo entitled Philadelphia,1952. The two clasped hands are self-evidently those of an African-American adult. Everything else is a mystery. 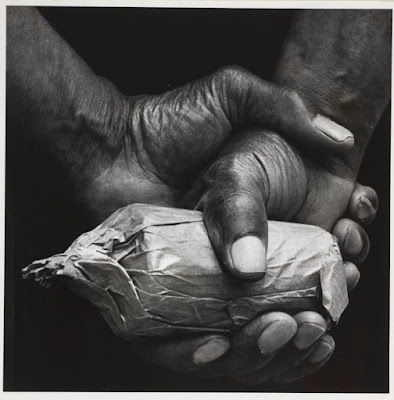 What is the cylindrical object wrapped in the paper bag? A can of soda? Before flip-top aluminum cans were invented in 1959, canned beverages were very rare. So that is an unlikely explanation.

Investigation of other photos taken by Heath in the early 1950's include an intriguing group shot of African-American spectators at the annual New Year's Day Parade in Philadelphia. The photo of the hands and mysterious object might be from this "shoot." At that time - and for many years before and after - the parading Mummers often dressed in minstrel garb, including  "black face." Might those tightly clasped hands be expressing anger at this racial slight?

We'll never know. And to keep asking questions in this way risks missing something more important. If "the eyes are the mirror to the soul," as the old saying goes, hands are a prime indicator of a person's work history. With this photo of creased, calloused hands, Heath captured years of honest toil.

Heath might have been a "street" photographer but he never engaged in Weegee-style storytelling. Nor did he venture into bizarre realms as did Diane Arbus. Certain of Heath's photos seem to share an affinity with Arbus' pictures. Heath photographed a woman suffering from dwarfism as she studied Egyptian statues at the Metropolitan Museum of Art.Yet there is not even a hint of abnormality in this scene. It is such a sensitive and affecting picture that the woman's physical stature is not immediately noticeable.

A more telling work of narrative photography is Heath’s Drowning Scene, Central Park, New York City,1957. It is one of the most powerful depictions of the range of human feeling ever captured in a single photo. 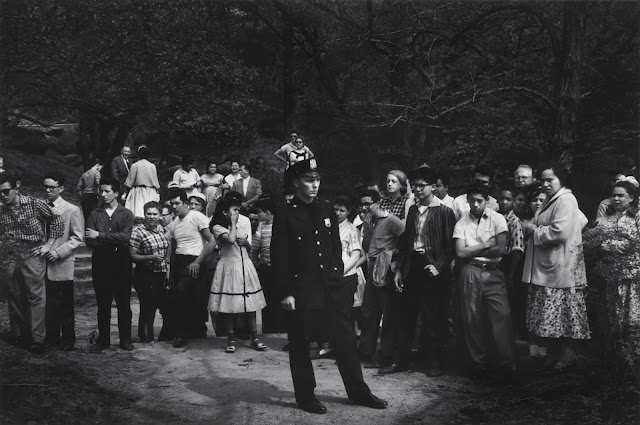 Here we see 1950's America gathered together to behold the aftermath of shocking event. The faces of the well-dressed, generally buttoned-down crowd betray every manner of emotion from the NYPD cop's impassive countenance to horror on the faces of several of the women and the bemused curiosity of some of the young men.

Death has taken center stage in the Eisenhower-Hoody Doody era. Heath, unlike Weegee, denotes the presence of Death indirectly in his photo. No gore spattered corpse. But Death is there. You can see it in the faces of the Central Park onlookers.

This kind of thing was not supposed to happen in public during the 1950's. It was a case of "See It Now" without the televised commentary of Edward R. Murrow. Each onlooker is directly involved - even if at second-hand. Each person among the throng of bystanders is alone with their own thoughts. Each must deal individually with the emotional impact of seeing a dead body at close quarters.

There are no children among the crowd in Drowning Scene. Yet, many of the most disturbing of Heath's photos deal with children. The urge to psychoanalyze these pictures is almost irresistible once the details of Heath's childhood are known.

Heath was born in 1931 during the Great Depression and abandoned at age four by his parents. He was raised in orphanages and foster homes in Philadelphia. At one point, after living for a year in a foster home, Heath was sent back to the orphanage while another child, a girl, was kept. The effect on a child of such a rejection cannot be imagined. 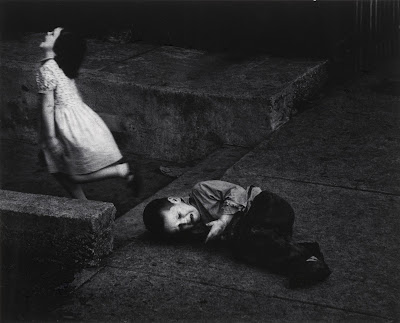 One of Heath's most frequently reproduced photos is entitled Vengeful Sister, Chicago, 1956. The "subject" might well reflect suppressed childhood pain from Heath's past.

This scene is usually described as a boy writhing in pain while his sister lets out a shout of triumph. Perhaps that is what happened - the children were fighting and the sister knocked her brother down. But if I had not read the "vengeful sister" tag on this photo, I would never have thought to interpret it this way. By the arch or her back and the way she is running, the girl could easily be screaming in horror at the boy's plight. 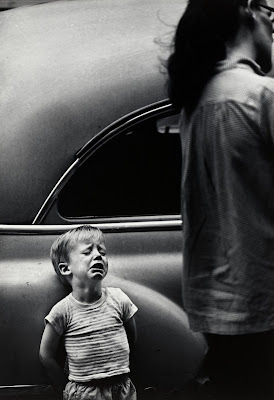 Keith Davis is correct in emphasizing the "primal, visceral sensibility" of Heath's photos. These incredible, yet prosaic, images document raw emotion. There is nothing ambiguous about Heath's photos. It doesn't matter whether the little crying boy in New York City, 1962 is a spoiled brat or if he has witnessed something horrible. This is a depiction of pain. So is Vengeful Sister.The narrative details are unimportant.

And the same is true of Heath's images of joy. There are just as many of these moments of happiness as of woe in the exhibit. There is a delightful 1958 picture of a mother helping her daughter learn to roller skate that positively beams joyfulness throughout the gallery. 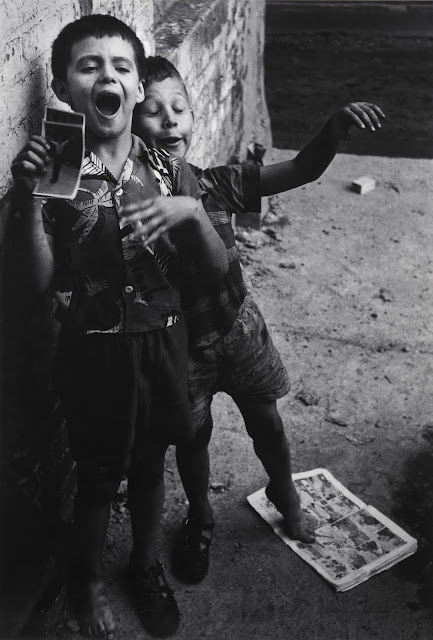 The same is true for the photo of two ragamuffin boys, larking about in Chicago, 1956. Perhaps Heath was subconsciously evoking the childhood joys that he was denied in Philadelphia twenty years before. But to "seize the moment" of joy and create a photo like this requires a special degree of humanity, as well as skill. This is a magnificent photo, a testament to these attributes in Heath's life.

In the fullness of time, children emerge into adulthood. Like the blank-faced young woman in Kansas City, Missouri, March 1967 , the introductory image to this essay, we all must face life on our own - but never alone.

Henry David Thoreau described solitude as the most companionable of companions. Dave Heath's photos affirm the importance and the durability of our lived experiences. Our memories, happy or sad, are constant companions. Memory is always with us.