Gauguin to Picasso: Masterworks from Switzerland at the Phillips Collection 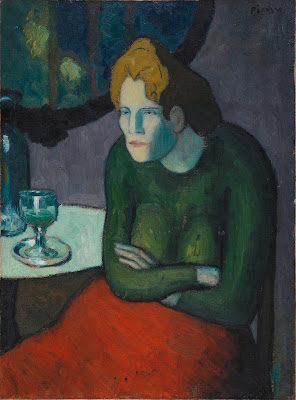 Gauguin to Picasso: Masterworks from Switzerland

No one knows for certain what was the last painting created by Vincent van Gogh. That sad honor may well belong to a work currently on view in a special exhibit at the Phillips Collection in Washington D.C. Van Gogh's The Garden of Daubigny, painted during the early summer of 1890, is one of the remarkable works appearing in Gauguin to Picasso: Masterworks from Switzerland - the Staechelin and Im Obersteg Collections.

The selected works from the two Swiss collections at the Phillips Collection include other masterpieces of early Modernism. But it is appropriate to begin this review with The Garden of Daubigny. For one thing, this poignant work was the first painting to greet my eyes in the exhibit. It was the work of art that I most wanted to see - and it did not disappoint. 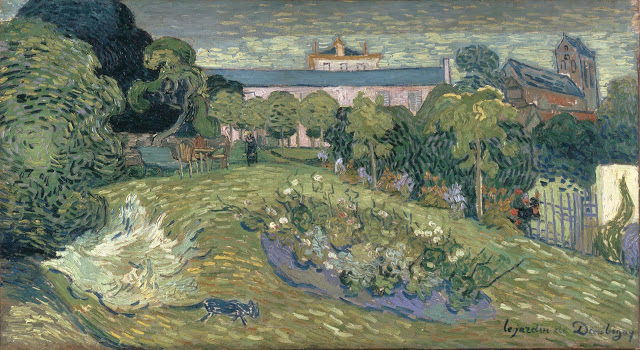 There is a wistful note to the presence of The Garden of Daubigny in the exhibit at the Phillips. This "double-square" sized painting was purchased by the Swiss businessman, Rudolf Staechelin, during World War I. Staechelin was a far-sighted collector. Van Gogh was still a controversial figure to many in the art establishment nearly three decades afer his death. One can only wonder what the course of van Gogh's life - and of Modern art  - might have been had there been a figure like Staechelin or the other Swiss patron of art, Karl Im Obersteg, willing to purchase works by the tortured Dutch artist while he lived.

If one is looking for a significant "message" in Gauguin to Picasso at the Phillips Collection it is the vital role of the patron in the nurturing of art. Rudolf Staechelin, Karl Im Obersteg and their American contemporary, Duncan Phillips, founder of the Phillips Collection, played a vital role in the story of Modern art. Without such patrons - willing to take a risk to their bank accounts and their reputations - many of the artists  whose works appear in the exhibition and in the galleries of the Phillips would have starved or faded into oblivion.

If one is looking for a note of controversy in the exhibit, Paul Gauguin’s NAFEA faaipoipo (When Will You Marry?) will provide it. This painting, removed from the Swiss museum where it was long displayed, was sold by Staechelin's descendants for a record-smashing $300 million. This has raised serious questions about the viability of the public display of privately-owned art works. 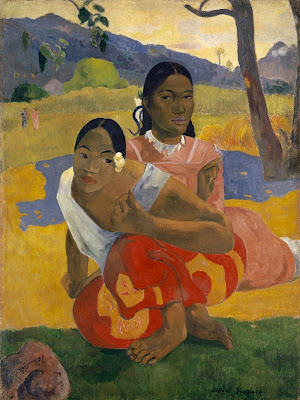 Paul Gauguin, NAFEA faaipoipo (When Will You Marry?), 1892

Rudolf Staechelin bought NAFEA faaipoipo (When Will You Marry?) during a brief but brilliant collecting campaign as war raged throughout Europe. His collection has been on extended loan to the Kunstmuseum Basel for much of the period since his death in 1946.

The sale of NAFEA faaipoipo (When Will You Marry?) hardly seems in keeping with opposition to "red tape" and  bureaucracy. With much of their family assets tied up in these masterpieces, no doubt the Staechelin Family Trust felt that one of these works needed to be sold to generate some revenue.

Everyone has bills to pay.

This episode, in turn, underlines the importance of private institutions like the Phillips Collection.  Duncan Phillips established his museum during the 1920's to afford a lasting venue for the care, study and display of great works of art. That is the reason why the Phillips Collection is the perfect site to to consider the role of the patrons of Modernism. 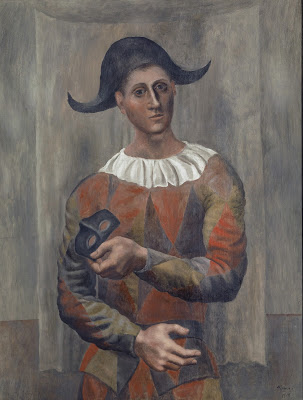 Staechelin excelled at making a quick strike based on agents' reports. He purchased Picasso's Harlequin with Black Mask, 1918, soon after it was painted. This was just as the rappel à l'ordre (call to order) was being proclaimed by Jean Cocteau, who called for a revived classicism in art.

Phillips bought works from art agents too, notably Renoir's Luncheon of the Boating Party, which he purchased in 1923 from the firm of Durand-Ruel. More importantly, Phillips supported living artists, some yet to make their mark. Others like Arthur Dove were established figures, but struggling in the Depression decade of 1930's.There is a gallery adjacent to the Gauguin to Picasso exhibit where the philosophy in action of Duncan Phillips is brilliantly illustrated.

This nurturing approach to art was shared by the second of the Swiss collectors, Karl Im Obersteg. Given the masterpiece status of many of Staechelin's paintings, it is easy to glide by the works by Alexej von Jawlensky (1864-1941). This Russian-born painter had been a member of the Blue Rider group, organized by Wassily Kandinsky and Franz Marc. Jawlensky fled to Switzerland at the outbreak of World War I. Im Obersteg was a loyal patron, amassing a major collection of Jawlensky's works, which are comparatively rare in American museums and collections. 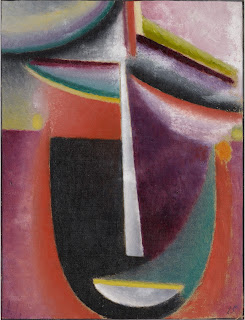 Diversity of theme and style characterizes Jawlensky's work. Many of his paintings, like Abstract Head: Mysterium, painted in 1925, possess a symbolical or mystical nuance. This was also true of the paintings of Georges Rouault, another painter favored by Karl Im Obersteg. 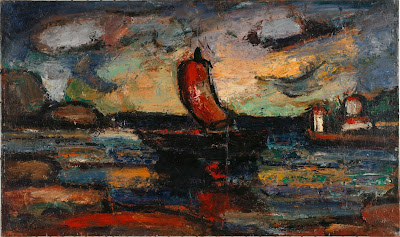 If Jawlensky and Rouault lack name recognition in the U.S., that does not mean that Karl Im Obersteg only specialized in lesser known painters. He too purchased  works by Picasso like the remarkable The Absinthe Drinker. This work was created in 1901, on one side of a double-sided canvas, with Woman at the Theater on the other. Im Obersteg also bought a fine portrait by Amedeo Modigliani, Portrait of Mrs. Dorival, painted around 1916. 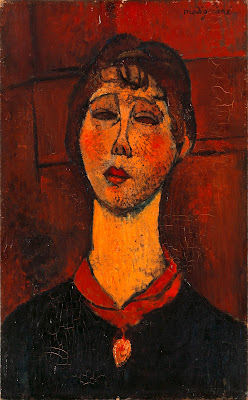 These signature works may establish the range of Im Obersteg's taste as a collector. But Marc Chagall's three rabbi paintings from 1914 evoke an almost prophetic stature for both the painter and the patron. Whether you focus on each individual painting, as in Jew in Black and White, or study all three together, they form a triptych-like presentation of living faith. 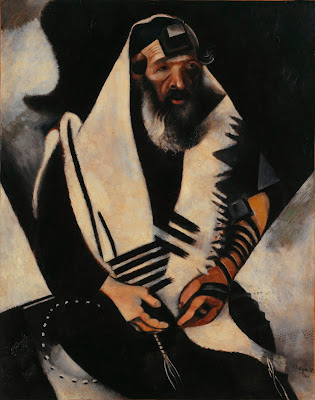 In many ways, these outstanding works by Chagall form the heart of the Gauguin to Picasso exhibition, rendering all the attention to NAFEA faaipoipo (When Will You Marry?) a bit wide of the mark.

As you make your way through the exhibit, you may be struck by the "safeness" of much of the art bought by Rudolf Staechelin and Karl Im Obersteg.

It needs to be kept in mind, however, that the first purchase of a Cezanne for an American art museum only occurred in 1913. This was Cezanne's View of the Domaine Saint-Joseph, painted around 1888  and bought by the Metropolitan Museum of Art at the New York Armory Show. 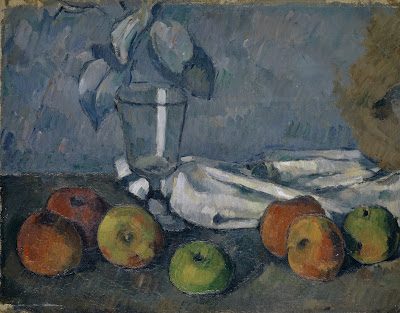 If not radicals or revolutionaries, Rudolf Staechelin and Karl Im Obersteg were patrons of vision whose astute purchases of Modern art helped establish the great artists of Modernism. Staechelin and Im Obersteg  were members of a generation of collectors of genius which included Samuel Courtauld in Great Britain, Dr. Albert Barnes and Duncan Phillips in the United States.

All of these men attempted to find ways of sharing their treasured works of art with the public. And for decades their various methods of collection display, either at public museums like Kunstmuseum Basel or at independent facilities which they created, like the Barnes Foundation or the Phillips Collection, seemed to work.

Then the BIG MONEY hit the art world during the 1980's. Noblesse oblige was no longer enough to raise the funds to purchase (or in some cases protect) notable works of art.

This is the "way of the world" of the art world these days. We need to carefully consider this disturbing trend. Not only does it apply to "pros and cons" related to the sale of NAFEA faaipoipo (When Will You Marry?). The viability of museum trusteeship of great art is at risk.

The role of patrons in supporting creative artists and of public museums to conserve and display their work cannot be dismissed as relics of a bygone era. Whatever the next phase in the world of art, anyone involved in the decision-making behind endowments and museum policy would be well to reflect on these wise words by Duncan Phillips:

The really good things of all ages and all periods can be brought together in one room with such delightful result that we recognize the universality of art and the special affinities of artists.
***
Text: Copyright of Ed Voves, all rights reserved

Posted by Art Eyewitness at 6:19 AM