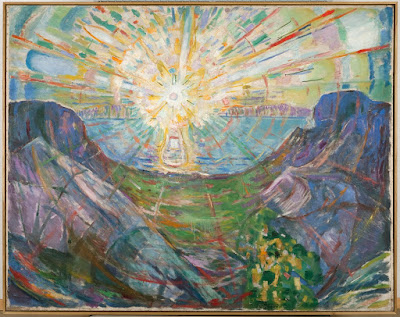 In September 1888, Vincent van Gogh wrote to his brother, Theo, about his "tremendous need for, shall I say the word - for religion - so I go outside at night to paint the stars."
This was the genesis of two of van Gogh's most famous paintings, The Starry Night over the Rhone, created at the time of his note to Theo, and the tumultuous, visionary Starry Night, painted less than a year later, in June 1889.

The Starry Night over the Rhone, from the collection of the Musée d'Orsay, Paris, is currently on display in a splendid exhibition at the Art Gallery of Ontario in Toronto, Mystical Landscapes. The brilliant art and provocative ideas set forth in the exhibit are treated in an outstanding companion catalog, Mystical Landscapes: Vincent Van Gogh to Emily Carr. 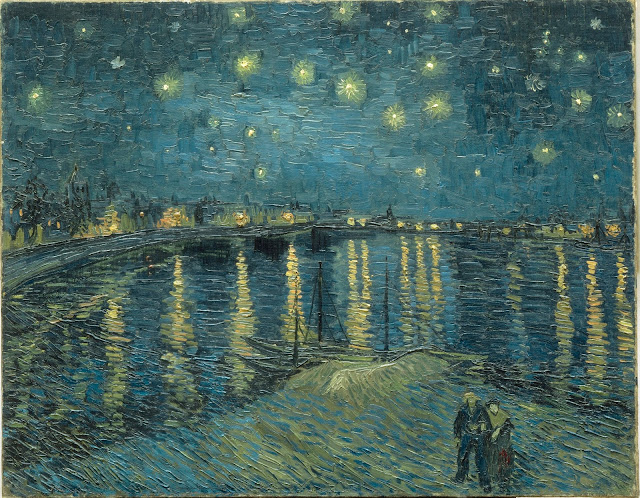 Vincent van Gogh, The Starry Night over the Rhone, 1888

Van Gogh's search for religion led him to paint the constellation, Ursa major - commonly referred to as the Big Dipper. Glimmering above the Rhone River as it flows through the city of Arles in southern France, the star-filled sky evoked a sense of promise and purpose.

Van Gogh, full of plans for his "Studio of the South," painted this scene which reflected his hopes for the future. Only a few months later, tragic disputes with Paul Gauguin triggered a shattering nervous breakdown.

Mystical Landscapes at the Art Gallery of Ontario shows that van Gogh's yearning for "shall I say the word - for religion" was part of a cultural quest known as Symbolism. Beginning in the 1880's and continuing to the years immediately before World War II, Symbolism was a search for "meaning." Artists probed the human soul and reflected upon the spiritual environment in which they - and we - live.

Symbolism as an art movement included such a diversity of styles that is easy to think of it as an idiosyncratic sideshow of Modern Art. Yet, Symbolism was regarded by most artists of the late nineteenth and early twentieth centuries as a serious and sincere response to the troubles and challenges of the Industrial Age.

The exhibit Mystical Landscapes was conceived by Katherine Lochlan, one of the leading curators of the Art Gallery of Ontario. In her poignant introduction to the exhibit catalog, Lochlan notes that she experienced a spiritual awakening during a visit to Ireland. This motivated her to begin planning Mystical Landscapes.

Several of the team of scholars who assisted Lochlan are members of the clergy. Their essays provide insights of enduring value. Especially valuable are reflections on the need to approach art  - and life - from the point of view of humility and contemplation. John Franklin, who teaches theology at the University of Toronto, comments on mysticism:

This is the way of unknowing. At the heart of this invitation to unknowing is the fact that God is not an object of human knowing. All efforts to include God as simply one more object for our human knowledge bank ultimately fail because of the uniqueness of the divine.

Comprehending these theological concepts sometimes entails concerted effort on the part of readers. Franklin's essay, for instance, provides a detailed contrast of the two paths of mysticism. Cataphatic, the positive, proactive form of mysticism, takes place when God's presence is closely felt. Apophatic mysticism occurs in the "absence" of God, during the Dark Night of the Soul.

Van Gogh's experience of cataphatic and apophatic mysticism is graphically depicted in his Starry Night paintings. Other artists experienced pain and tragedy, too, like Charles-Marie Dulac who died, aged 33 in 1898, from lead-poisoning which he had contracted early in life while working in the wall paper industry. The dying Dulac was inspired to create stunning works of art based upon the poem by St. Francis of Assisi, Cantacle of the Creatures.

The art works on view in Mystical Landscapes range in date from the 1880's to the 1930's. Yet this impressive exhibit and the superb catalog, jointly published by Delmonico Books and Prestel Publishing, is a tract for our times. Indeed, it will remain relevant for a very long time to come.

The late Victorian era and the first decades of the twentieth century were marked by a crisis of faith. The heartless creed of Social Darwinism became the new "gospel," preempting the place of the four Evangelists. The seeds of spiritual doubt were sown by philosophers like Ernest Renan (1823-1892) who praised the historical Jesus while demythologizing Christ.

Reacting against these developments, artists and poets looked for signs, symbols, testaments to God's presence in the universe. Some artists, like Maurice Denis, remained devout Christians. Denis depicted traditional Christian imagery like Christ's "agony in the garden." Denis, however, placed this sacred scene in a contemporary setting. Gethsemane in his 1918 painting has been relocated to Brittany where a small vessel sails perilously close to the rocky shoreline. 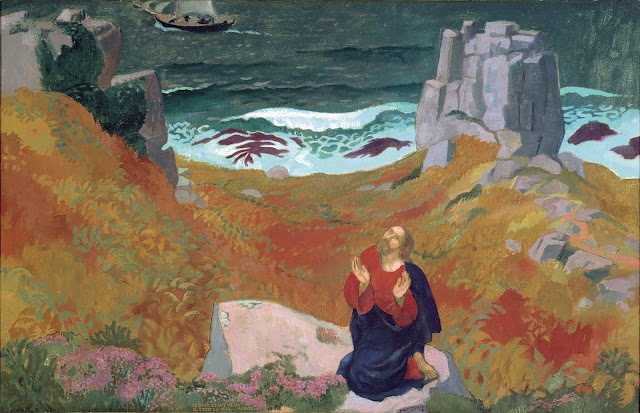 Brittany was an interesting locale for Denis' La Solitude de Christ. This remote province had been the site of the artist's colony of Pont Aven, founded during the 1880's. It was in Brittany that Paul Gauguin first shaped the religious orientation of Symbolism with three stunning works on view in Mystical Landscapes.

Vision after the Sermon (1888), The Yellow Christ (1889) and Christ in the Garden of Olives (1889) combine Christian iconography with personal, some might say blasphemous, elements. Gauguin placed his own features in each of these works: on a Breton priest, on a statue of the crucified Christ and finally on the face of the suffering, agonized Jesus.
This identification appears to be scandalous but actually reflects a mystical experience where God and believer become one. 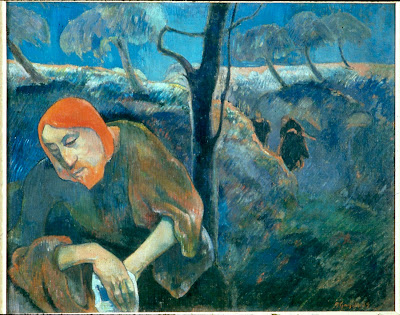 Paul Gauguin, Christ in the Garden of Olives, 1889

In a brilliant essay in the exhibit catalog, Gauguin's three paintings are interpreted as a triptych, created in a similar way to medieval works by Hans Memling and other masters of religious art. The noted  scholar, Bobomila Welsh-Ovcharov, also makes a convincing case that these paintings reflect the stages of spiritual searching.

These steps would feature in the seminal 1911 book by Evelyn Underhill, Mysticism: A Study in the Nature and Development of Spiritual Consciousness. Underhill's five steps - Awakening of Self, Purgation of Self, Illumination, Dark Night of the Soul and Unitive Life  - appear again and again in the paintings on display in Mystical Landscapes.

I have yet to visit Mystical Landscapes exhibit. But when I did see Gauguin's three Breton paintings at an exhibit at the National Gallery of Art in 2011 the relation of these works to the stages of spiritual searching escaped me. Once the connection is grasped between the religious convictions of artists like Gauguin and the elements of their paintings, these works take on a whole new significance. They become "icons" in the true sense of the word.

Van Gogh found Gauguin's artistic approach to mysticism hard to accept. Van Gogh, raised a Protestant, believed  that spiritual encounters should be conveyed in "here and now" images not by "abstractions" as he described Gauguin's Breton paintings. While enduring a spiritual "Dark Night" at the Saint-Paul asylum in Saint-Rémy, he painted his markedly different version of the Garden of Olives. Here, a cloud (representing the Holy Spirit) drifts over the olive trees, signifying God's presence in our lives. 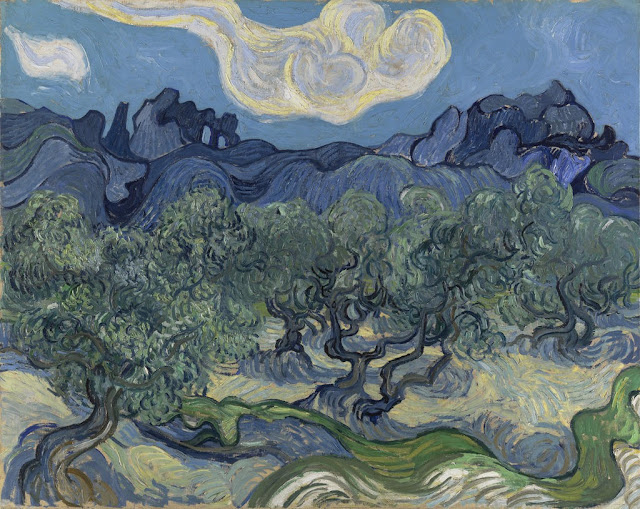 At first glance, van Gogh's choice of terms to describe his painting is hard to grasp. His mysterious cloud is more of an abstraction than Gauguin's identification with the face of Jesus. In a moving letter to Emil Bernard, a fellow artist and mutual friend of Gauguin, van Gogh advised against painting "sterile metaphysical meditations that aren't up to bottling chaos, which is chaotic for the very reason that it won't fit into any glass of our caliber..."

As I noted earlier, I am familiar with Gauguin's Breton triptych and I studied van Gogh's
Starry Night over the Rhone at a 2008 exhibit at MOMA. But Mystical Landscapes presents works by major artists rarely seen in exhibits in the United States. We are introduced to unfamiliar artists like Eugène Jansson, the Swedish painter who brilliantly evoked the Dark Night of the Soul in several paintings. 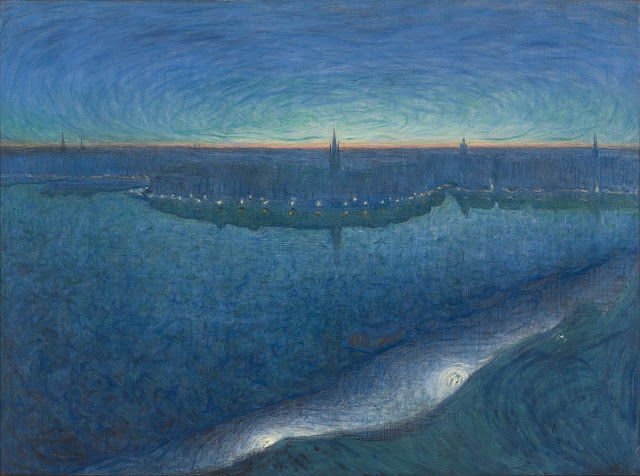 In an exhibit that emphasizes the way of unknowing, it is a very good thing when we are introduced to new artists or have our assumptions challenged about artists we thought we knew.

In the case of Claude Monet, an unexpected spiritual dimension is explored in the essay on his Nympheas, the fabled Water Lilies. 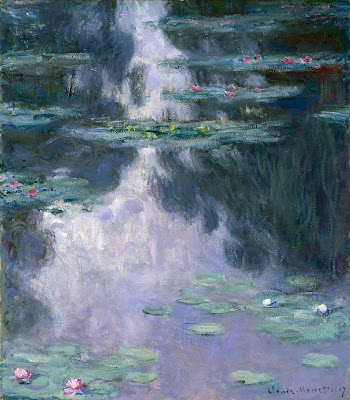 Most accounts simply accept that Monet was an atheist. Lochlan notes that Monet worked on the huge panel paintings of the water lilies after prolonged periods of meditation.

"Monet spent so much time in contemplation," Lochlan writes, "that he entered into a mystical state that he compared to a hypnotic trance."

Learning about the Canadian painters featured in Mystical Landscapes was also a revelation. The spiritual power of Tom Thomson, the Group of Seven and especially the astonishing Emily Carr is certainly worthy of more study - and further exhibits "south of the border."
The experience of these Canadian artists was shaped by many factors, a number of which linked them to the mystical experiences of Symbolist artists in Europe and the United States. Walt Whitman's poetry. Ralph Waldo Emerson's transcendental philosophy and military service in World War I were powerful factors. So too were the Theosophical writings of Madam Blavatsky which Lawren Harris fervently embraced.

Ultimately, it was the Canadian landscape that lead Tom Thomson, Harris, Emily Carr and the others to approach God from the "way of unknowing." Vast, breathtakingly beautiful and still (relatively) undeveloped, Canada in the 1920's inspired these Canadian artists. 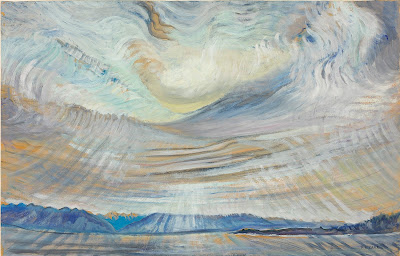 Writing in her journal, Emily Carr placed into words what she had visualized with brush and paint - the mystical landscape within all our souls.

We are of the same substance for there is only one substance. God is all there is. There is one life, God life, that flows through all. He that formed me formed you. Oh Father of all raise my consciousness to that sense of oneness with the universal.

Mystical Landscapes will travel to the Musée d'Orsay, Paris, in the spring of 2017. It will not, sadly, be making a stop-over in the U.S. But thanks to the wonderful catalog, I have profited immensely by journeying to this exhibition in spirit.