Wild: Michael Nichols at the Philadelphia Museum of Art & the National Geographic Museum 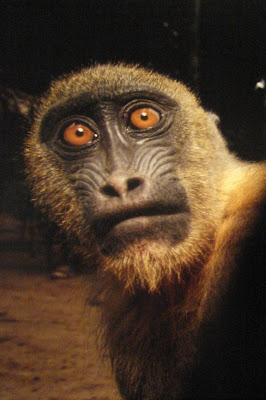 Philadelphia Museum of Art, through September 17, 2017

There is a temptation to apply the words "last of" to the great photographer, Michael "Nick" Nichols. "The Last Nature Photographer." "The Last Explorer." Or something like that.

The Philadelphia Museum of Art is currently hosting an exhibition of Nichols' photos. Entitled Wild: Michael Nichols, the exhibit thoughtfully presents Nichols' incredible images in careful juxtaposition with works of art from the museum's collections.When Wild completes its run in Philadelphia in mid-September, it will head down to the National Geographic Museum in Washington D.C.

The effect of Nichols' photos and the brilliant work of the Philadelphia Museum of Art curators soon dispels impressions about the "last of the wild." Instead, what we see evoked on the exhibit walls is the resilience of nature, the enduring spirit of an organic world. 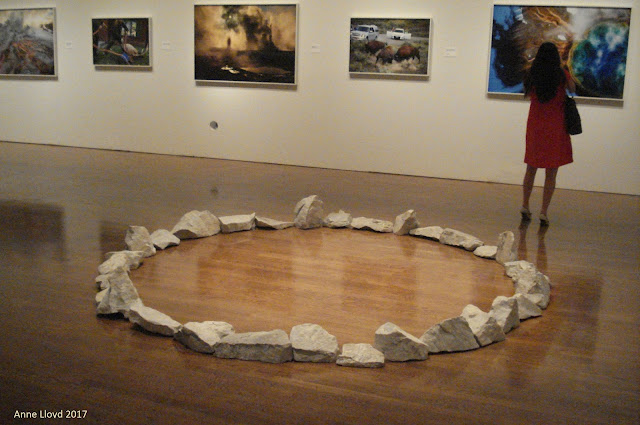 We see it on the gallery floor too. Richard Long's Limestone Circle (1985) is a deceptively simple sculpture. It represents the most perfect geometric shape, rendered with chipped, craggy bits of rock. A visually pleasing conceit on its own terms, Limestone Circle takes on a vastly more important meaning when you see it next to photos by Michael Nichols.

One of Nichols' pictures, an aerial view of cloud-dappled Lake Télé in the Republic of the Congo is a perfect match for comparison with Long's Limestone Circle. Lake Télé is ringed with forbidding jungle, still not fully explored to this day. The clear demarcation between land and water in the photo invites us to extend this distinction to our emotional response to this incredible image. The clear lake water evokes a sense of freedom and relative safety compared with the dangerous, trackless forests around it. 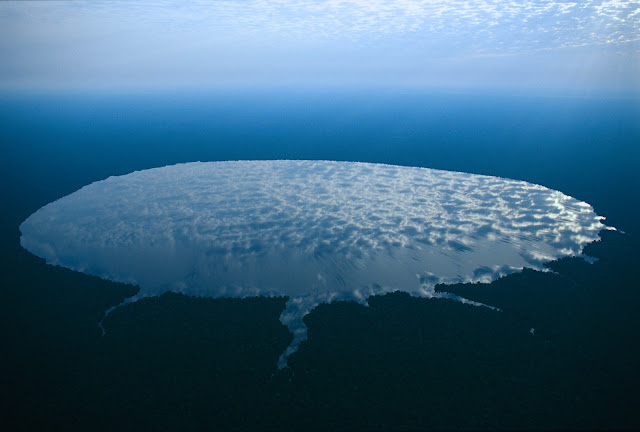 Lake Télé, however, is the reputed home of a Loch Ness-like monster, the Mokèlé-mbèmbé. Like Nessie, it hasn't been seen of late. Of course, the Mokèlé-mbèmbé is just a myth but crocodiles grow plenty big in Central Africa too.

We are on a lot safer ground with Limestone Circle. Yet, where is the "wild" in nature? Outside the circle of stones or within? Has the civilized, post-industrial world reduced nature to National Parks and extremely remote sites such as Lake Télé? Or will nature reassert itself, with the "wild" springing to life like weeds pushing  through cracks in the sidewalk?

I suspect that the really wild aspects of nature lie within - ourselves. 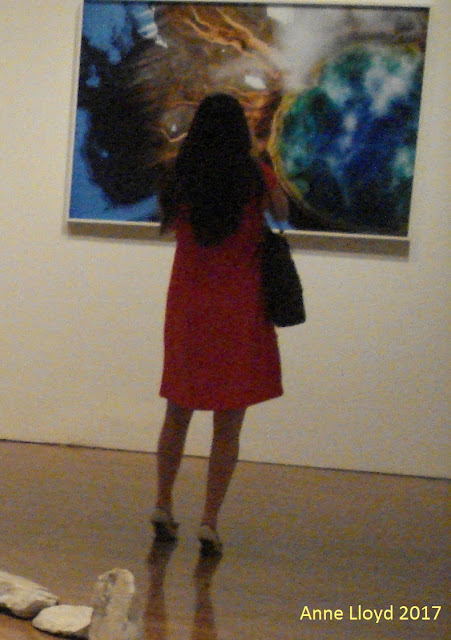 
While walking through the exhibit galleries, I saw a fellow art-lover looking at Nichols' photo of the Grand Prismatic Spring at Yellowstone National Park. The primary colors in the spring come from microbes called thermophiles, which thrive in the scalding hot water. Nichols photographed the Grand Prismatic Spring  and its thermophiles, turning the spring into a huge eye, exploding with luminous color into its surroundings.

By contrast, Richard Long's Limestone Circle is a blank canvas, waiting for us to fill the empty space with the "wild" hues of our imaginations.

Michael Nichols certainly has a vivid imagination, balanced by a pragmatic outlook on life and art. My wife, Anne, and I were able to spend some time with him at the press preview of Wild. A native of Muscle Shoals, Alabama, Nichols exudes a true "natural" character, able to adapt and flourish in any environment. He posed for Anne in front of one of his photos, fittingly, of Hildur, a Serengeti lion who has seen a lot of life. 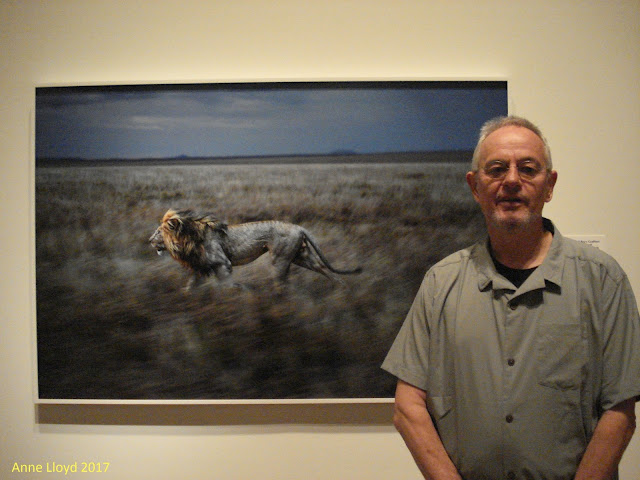 Nichols, a veteran photojournalist for National Geographic, is a master of realist photography. He personifies the proud job title that I used to hear back in the days when I worked for the Philadelphia Inquirer and Daily News. Nichols is a real "lensman."

That honorific means a lot of hard work and methodical planning. To get a shot of a Northern Spotted Owl swooping down through a Redwood Forest in Northern California involved staging an elaborate lure and split-second timing. The reward was an unforgettable image of a critically threatened species whose fate, due to habitat loss, has been the subject of controversy for nearly three decades. 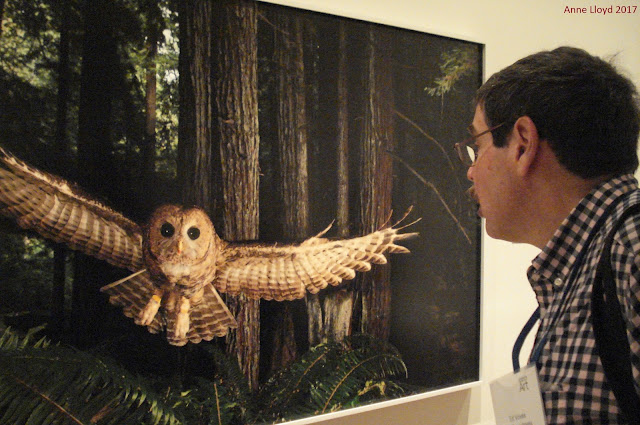 The Northern Spotted Owl is endangered because of the economic value of its forest home. Redwood trees, a prime candidate for the logger's saw, posed an even bigger challenge for Nichols' camera than the Northern Spotted Owl. To photograph two Redwoods for a five-page fold out for National Geographic, Nichols and a team of tree-climbing assistants spent weeks lowering cameras down the huge trees to create panoramic views of these towering giants.

In an interview with Sid Rodriquez, Interactive Content Writer for the Philadelphia Museum of Art, Nichols recorded the electric moment when the perfect moment for the perfect shots occurred:

On the thirteenth day, there was a moment where the sky got thin—we were doing these at dawn—and that’s what you’re looking for in the forest, where you still have some clouds to make the light soft. If it’s really cloudy, it’s just dead. It’s when—we call it cloudy bright—and the tree started glowing. I can’t see it, I’m looking through a computer on the ground, but the guys up in the tree are saying, “Nick, the tree, it’s glowing, it’s alive, we can feel it.” That’s when we made the set of pictures that became the composite we’re putting in the Great Stair Hall.

The composite that Nichols refers to is one of a pair of 60-foot copies of the Redwood photographs he took for the National Geographic. One is a winter-time study (2012) of a 3,200 year-old Giant Sequoia, the other a much younger Coastal Redwood, "only" 1,500 years of age, photographed in 2009.

The 60-foot tapestry-like photos are suspended from the rafters of the Great Hall of the Philadelphia Museum of Art. "Awesome" is perhaps the most over-used adjective in the English language (in polite society, that is) but for once it is an entirely accurate descriptor of Nichols' achievement. 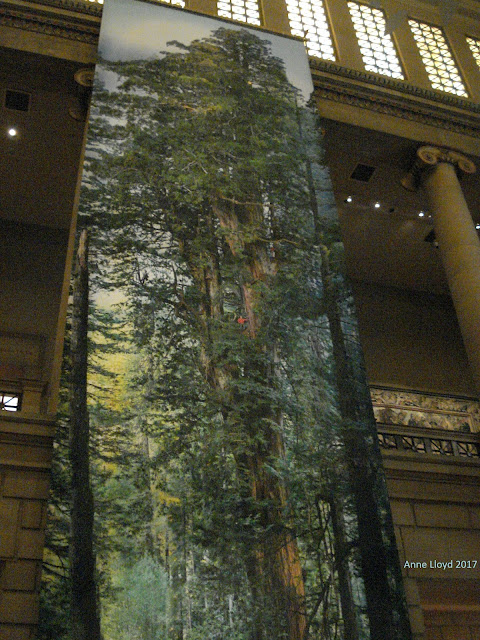 
If Nichols' Redwood photos testify to his patience and skill, there are others that testify to his courage and his strength of will. Nature really is "red in tooth and claw." The image of a tiger named Charger which Nichols took  in 1996 recalls Mutual of Omaha's "Wild Kingdom" TV series back in the 1950's. Nichols used a camera trap to get this incredible shot. Lot's of adventure but, like "Wild Kingdom," the gazelle gets away - this time. 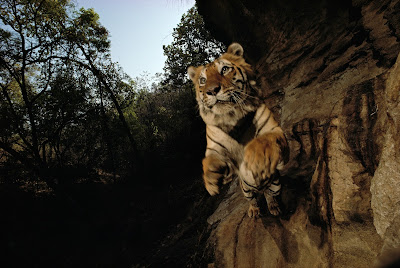 In other photos in Wild, we do see blood and gore. There's a wild-eyed lion named C-Boy chomping on a zebra, a chimp in the process of devouring a smaller monkey. We have to expect - and accept - that the working of the food cycle in nature is a messy process. All the same, Nichols must have nerves of steel and a cast-iron digestive system to be able to record such scenes.

Harder to stomach are Nichols' photos of animals abused by human beings. The frenzied chimpanzee chained in a squalid cage is a vastly more horrifying photo than C-Boy's lack of table manners. It took a great deal of moral courage, of professional focus tempered with fortitude, on Nichols' part, to take this picture. 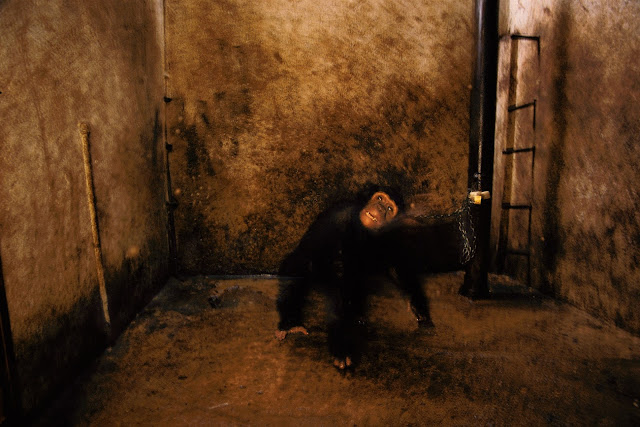 Ultimately, Wild is an exhibition about empathy. When one looks at the face of the Mandrill in the introductory image of this essay, the eyes that look back are very like a human's eyes. We sense a kinship with the Mandrill and the other wonderful animals depicted in Wild. Yet a gulf still separates us from them.

Will the empathy that we see displayed in Nichols' photos enable us to cross that divide? Will we every unchain the chimp in the cage and remove our shackles as well? If so, we will owe not a small debt of gratitude to Michael "Nick" Nichols.

***
Text: Copyright of Ed Voves, all rights reserved.  Images courtesy of Michael Nichols and the National Geographic Society and  Anne Lloyd. Interview text courtesy of the Philadelphia Museum of Art.

Posted by Art Eyewitness at 1:44 PM