The Self-Portrait, from Schiele to Beckmann at the Neue Galerie, New York City 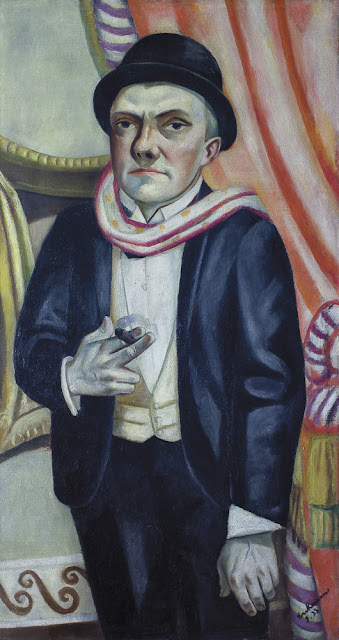 The Self-Portrait, from Schiele to Beckmann

Shell Shock. The Blast of War. The Thousand Yard Stare.

Today we have new, scientific names for the dreadful psychological and physiological consequences of the horrifying slaughter of World War I.

Hundreds of thousands of men suffered from the effects of PTSD during the First World War. So many were emotionally shattered that whole nations could be said to have been "shell shocked." And no nation experienced shell shock to such as debilitating degree as defeated Germany. You can see the effects of war in the many portraits painted by German artists following the Armistice of 1918 or in the photos taken of survivors, soldiers and civilians alike.

You can see the scars of  "Weltkreig" on the faces of the artists themselves.

The Neue Galerie, located on New York City's "museum mile", is currently presenting The Self-Portrait, from Schiele to Beckmann. This brilliant, unsettling exhibition displays self-portraits by most of the the leading German and Austrian painters of the first half of the twentieth century. Although direct references to the First World War are few, the facial expressions and eye contact depicted in these works all testify to what the great British historian, John Keegan, called "the face of battle."

The searing experience of war - and its disturbing, violent aftermath - found artistic expression in a school of new painting. This was known as Neue Sachlichkeit or the New Objectivity. It was a "warts and and all" style of visual representation which made no concessions to beauty. Indeed, the self-portraits painted under the auspices of Neue Sachlichkeit often accentuated the negative. 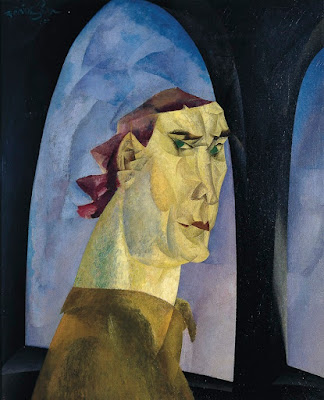 Lyonel Feininger (1871-1956) was born in New York City but spent much of his adult life in Germany. He was an accomplished woodcut artist, a pioneer of comic strip art and painted mystical landscapes and seascapes. Yet in this unsparing 1915 self-portrait, Feininger turns a withering glance upon himself and the viewer. The Great War, which experts had predicted would end in victory by Christmas 1914, was still raging. The world where Feininger's abundant artistic gifts had flourished was bleeding from a million wounds.

Was the anger so manifest in Feininger's self-portrait entirely the result of the ravages of war? Or were there deeper, unseen wounds as well?

The seventy-plus paintings on view at the Neue Gallerie testify to the emotional struggle which has characterized the art of the Germanic societies throughout most of modern history. To call Germany a "nation" before 1871 would be a misnomer. After 1871, the German "nation" marched to the orders of the militaristic Prussian elite. Austria during this period should more correctly be referred to as the Austro-Hungarian Empire. Thus, the dynamic cultural forces in Germany and Austria, bursting with achievements in art and science, were imprisoned by the straight-jacket of autocratic rule.

As a result of making the talents of modern Germanic artists conform to the authoritarianism of the Hapsburgs and Hohenzollerns, a state of psychological warfare was already under way even before 1914.

The Neue Gallerie exhibition begins with the self-portraits of Egon Schiele. This precocious and controversial artist was one of the indirect casualties of World War I. He spent the war guarding Russian POW's, only to succumb to the Influenza pandemic of 1918-1919 which killed over fifty million people worldwide. 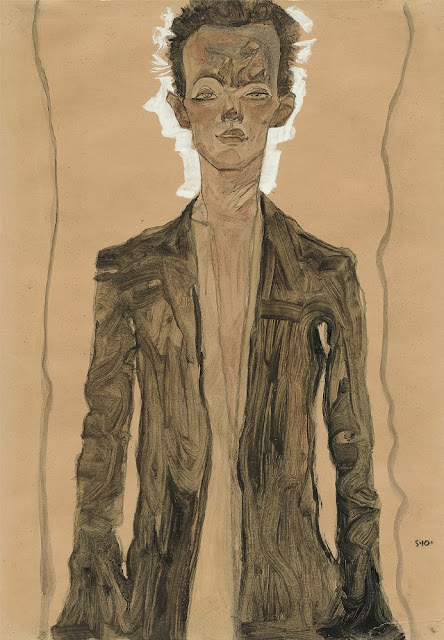 Schiele painted this sepia-toned self-portrait in 1910. Here we see a brilliant evocation of the agitated state of mind which was disturbing the European (especially the German) psyche in the run-up to the war.

Schiele's furrowed brow, unfocused eyes, gaunt face and the drab, uniform-like coat convey the image of a POW, such as he guarded during the war. But what really makes this self-portrait stand-out is the flaring nimbus of harsh, almost blinding, white light which surrounds his head. It is the halo of a martyr, or at least a premonition of martyrdom such as befell so many of Schiele's generation.

For many young Germans, this martyrdom came at the First Battle of Ypres in October 1914. Entire regiments of German students, who had volunteered only a few months before, were hurled at the British trenches and mowed down by rifle and machine gun fire. The slaughter was dubbed the "Kindermord" or "Slaughter of the Innocents."

One of those who fell in the "Kindermord" was Peter Kollwitz. His mother, Käthe Kollwitz  (1867-1945) was one of the most talented artists of her generation. When Germany's leading painter, Adolf Menzil, recommended her for a medal, Kaiser Wilhelm promptly denied the request. 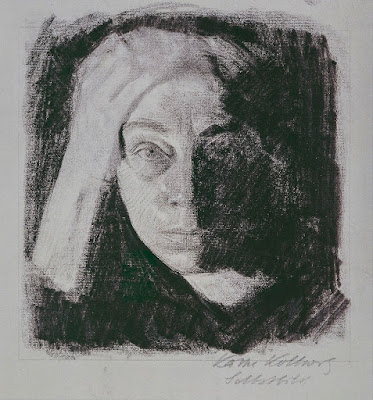 Kollwitz came from a family with Socialist leanings, so the Kaiser's slight probably had little effect on her. But the death of Peter haunted Kollwitz for the rest of her life.

Amazingly, this self-portrait, shadowed by a wave of black, was created in 1910. As we saw with Schiele's self-portrait of the same year, there is a palpable sense of foreboding, of dread of the unthinkable. Sadly, for Kollwitz, the unthinkable was to happen again in 1942 when her grandson, also named Peter, was killed on the Russian Front.


Unlike Peter Kollwitz, Otto Dix served on the Western Front and survived. He took part in one of the worst slaughters of the war, the Battle of the Somme in 1916. The experience transformed him from a loyal German and a good soldier into a brutally, almost sadistically, honest critic of the folly of war - and of "peace" too.

"Peacetime" Germany was governed by the Weimar Republic. Weimar leaders like President Friedrich Ebert made an honest, if uninspired, attempt to deal with post-war Germany's many problems. The worst was the rampant inflation (at one point in 1923 a single US dollar was worth 4.6 million German marks). Dix, outraged at the catastrophic influence of Prussian militarism on German politics and society, might have been expected to extend the Weimar Republic a measure of  sympathy. 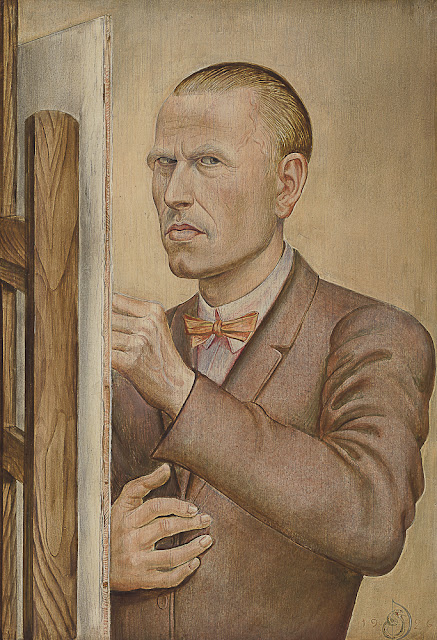 Dix, however, excoriated Weimar's politics and society. He was ruthless in exposing the financial profiteers, the disregard of the vast numbers of crippled and shell-shocked veterans and the lurid sexual atmosphere of Berlin. He also depicted himself with Neue Sachlichkeit candor.

Following the war, Dix studied Old Master techniques such as the use of tempera paint and layering techniques pioneered by Jan van Eyck in the 1400's. Fellow artist, George Grosz (1893-1959), nicknamed him "Otto Hans Baldung Dix" after the Reformation-era painter, Hans Baldung (1484-1545). Baldung's Death and the Maiden, the most notable version of which was painted in 1517, was emblematic of the collapse of Christendom. Martin Luther set forth his Ninety-five Theses, attacking Church corruption, the same year.

With that demonic look in his eye, Dix may well be painting a twentieth century version of Death and the Maiden. Or he might be peering into the soul of the person whose portrait he is painting. Or is he, the decorated machine-gunner of the Somme (Iron Cross, second-class), looking blankly on the world with a "thousand-yard" stare?"

A century later, we don't know the answers to such questions, either about Dix or Weimar-era culture. Dix's art and that of many other Weimar artists held postwar Germany up for scrutiny. What they discovered was a society adrift, without an anchor and troubled waters looming ahead. That, however, was the only answer to their many questions. In truth, Neue Sachlichkeit could just as well have been termed the New Ambiguity. 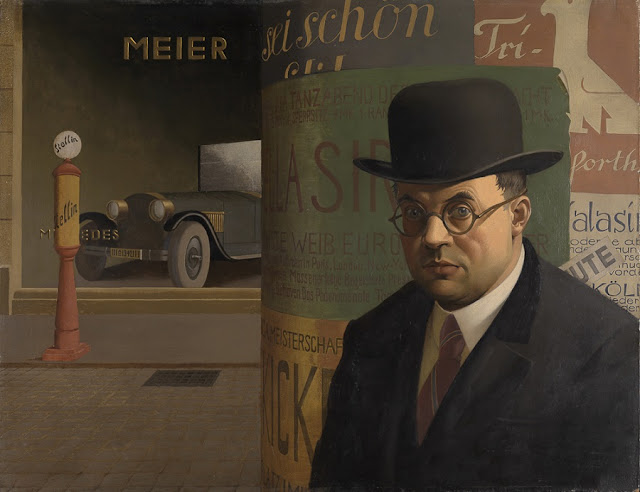 George Scholz, Self-Portrait in Front of an Advertising Column, 1926

George Scholz (1890-1945) was another harsh critic of Weimar. In his self-portrait, he presents himself dressed as a proper business executive. in the background is an advertising column covered with samples of the inventive sales posters which were a trademark of Weimar. Scholz was a staunch Communist, later targeted as a "degenerate" artist by the Nazis. But in posing in a banker's suit and bowler hat, Scholz castigated himself as surely as the Nazis were to do.

Max Beckmann, arguably the greatest German artist of the twentieth century, portrayed himself with similar ambiguity. He often depicted himself as an urban sophisticate, in "tux and tails." Beckmann so often dipped his paint brush in "acid" in his depictions of life in Weimar Germany, that it is hard to know what his inner thoughts and motivations were - especially concerning himself. 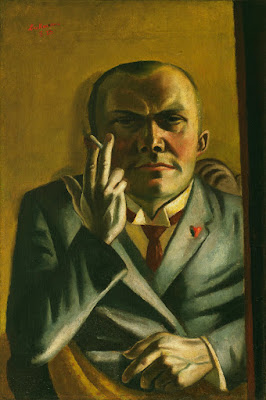 Max Beckmann, Self-Portrait with a Cigarette, 1923

Beckmann had served as a medic in the war, but after only a short spell at the front, he suffered a nervous collapse. Beckmann's work, equally brilliant in painting, sculpture and printmaking, showed a society which had experienced a comparable nervous breakdown.  Sometimes, Beckmann portrayed himself like a clinical psychologist observing his patient. On other occasions, as in the introductory image to this essay, Beckmann presents himself as a clownish figure or a sleazy "cad."

In 1933, the Nazis took power. The failed-artist who commanded them resolved all of the ambiguities of the Weimar Republic by abolishing it. Germany entered into a time of nightmarish certainty.

In 1919, William Butler Yeats had written in "The Second Coming" words that applied to the Weimar Republic, to the Nazi new-order and to its victims:

The blood-dimmed tide is loosed, and everywhere

The ceremony of innocence is drowned;
The best lack all conviction, while the worst
Are full of passionate intensity.

The passionate intensity of the Nazis victimized all of the artists whose self-portraits we see on the walls at the Neue Galerie. All were banished from teaching jobs or driven into exile. But only one paid the ultimate price of Hitler's Final Solution. This was Felix Nussbaum (1904-1944). Originally a Surrealist painter, Nussbaum fled from Germany after Hitler and the Nazis gained power. But he did not go far enough to escape them. In 1944, Nussbaum was murdered in Auschwitz. 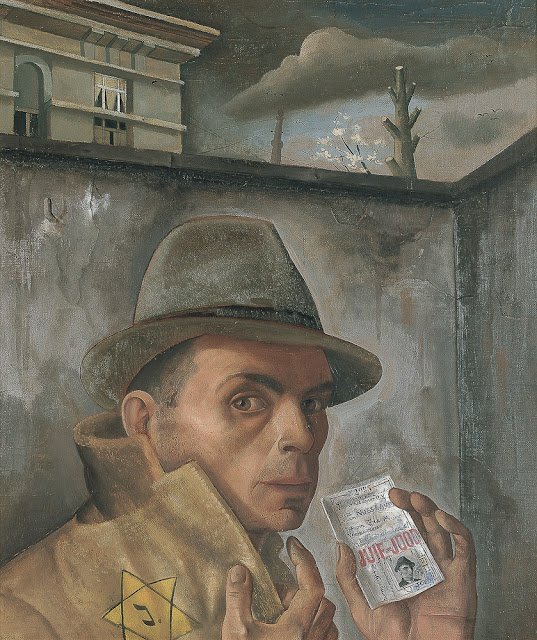 What can one say, looking upon the self-portraits of Nussbaum on display in this staggering Neue Galerie exhibition?

The first thing to admit is that the "ceremony of innocence" was drowned in the Communist Soviet Union at the very same time as the moral center collapsed in Nazi Germany. Totalitarianism during the 1930's and 40's flourished on both sides of the battle lines. It can take root anywhere.

The second, most important, admission must be that the "ceremony of innocence" could easily be drowned today. All it would take is for you and I to stop honestly looking
for answers to the human dilemma. This was something which, despite their inner uncertainties, Otto Dix, Käthe Kollwitz and Max Beckmann never ceased searching for.

Posted by Art Eyewitness at 7:18 AM