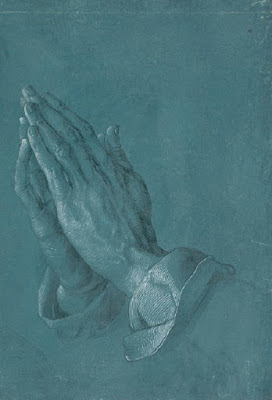 Rudolf II, Holy Roman Emperor and Europe's leading art collector, ordered his agents to purchase one of the greatest paintings in Italy, Feast of the Rose Garlands, and bring it to his palace in Prague. The large oil on wood painting, measuring 5.3 ft x 6.3 ft., was duly transported - at one point, hand-carried along a footpath across the Alps - to Prague Castle.

The year was 1606. Rudolf's prize acquisition was not a contemporary work by Caravaggio nor a classic painting from the studio of a High Renaissance master like Raphael. Indeed, Feast of the Rose Garlands, had not been painted by an Italian at all. It was the masterpiece of the greatest of German artists, Albrecht Dürer. 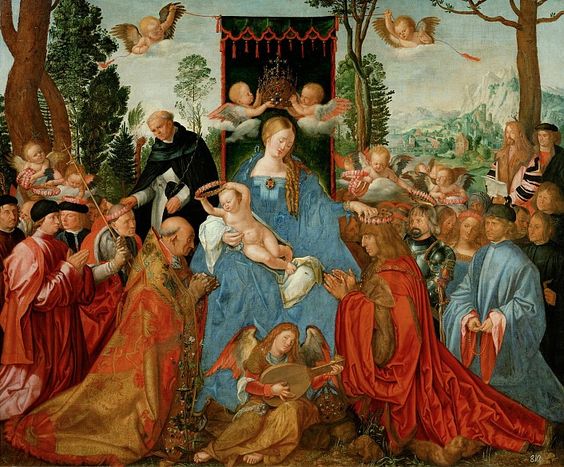 Albrecht Dürer, The Feast of the Rose Garlands, 1506

Rudolf was obsessed with Dürer's art. The emperor, who was slightly mad to begin with, spared no expense to purchase Dürer's works of art. In 1588, he had spent a princely sum to buy a large bound volume known as the Kunstbuch, which contained 100 original drawings and watercolors by Dürer. The nature study, The Great Piece of Turf (1503), was just one of the works of Dürer's genius which were carefully preserved in the Kunstbuch.

No art book today - or ever - can match the Kunstbuch. However, Albrecht Dürer, the catalog of the recent exhibition at the Albertina Museum in Vienna, comes close. 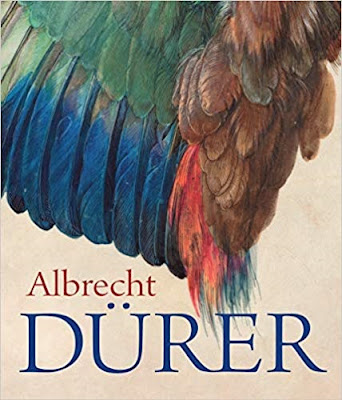 Published by Prestel, Albrecht Dürer surveys the Renaissance artist's entire career. The quality of the illustrations makes descriptive words like "lavish" or "magnificent" seem trite. The scholarship which informs the accompanying essays by Christof Metzger and Julia Zaunbauer is of the highest quality, as well. This, truly, is an outstanding book about one of the greatest artists in European - and world - history.
.
The Albrecht Dürer catalog essays, which include an excellent short biography, establish the salient features of Dürer the artist: "skill" and "versatility."

Albrecht Dürer (1471-1528) succeeded not by virtue of raw talent - though he had plenty - but by study, experiment, application and discipline. His first work, a self-portrait drawn in silverpoint "when I was still a child" (as he noted on the sheet), was an audacious achievement. But the level of drawing testifies to the rigorous training he received from his father, a master goldsmith and a superb draftsman in his own right. 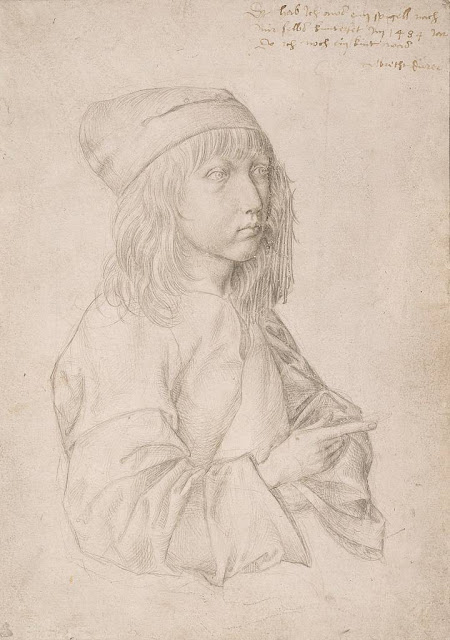 Dürer's skill extended to many artistic media: drawing, painting, etching and woodcarving. This last is a somewhat contentious point but important to consider from the standpoint of Dürer's versatility. Most of the woodcuts for Dürer's marvelous prints were created by master carvers based on his designs. But enough indications remain to show that Dürer was adept at this patient, meticulous form of artistry.

Such mastery of woodcarving would have informed Dürer's relationship with the professional carvers he employed. When Dürer handed the design of a picture to a woodcarver or formschneider like Hieronymus Andreä, he could do so, secure in the knowledge that both he and Andreä were "on the same page" to use a modern expression.

This ability to both delegate and to task-manage points to another of Dürer's great achievements. He succeeded brilliantly in organizing and operating a successful workshop. In this, he can be compared to Verrocchio, whose studio in Florence was the training ground for Leonardo, Ghirlandaio and, most likely, Botticelli.

Dürer is often called the "Leonardo of the North" because he wrote major books on aesthetics later in life. Unlike, Leonardo, Dürer had the drive to see the job in hand through to completion. Dürer's output was staggering and there was little unfinished work in his studio when he died in 1528. 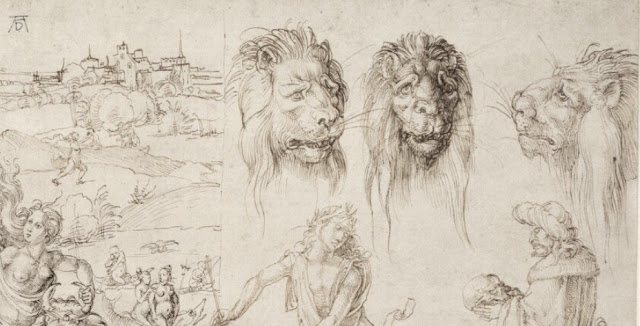 Dürer sketched and drew with relentless enthusiasm. A single page in the Kunstbuch preserved a mythological scene, with a typical south German town in the background,  figure studies of Apollo and a Hamlet-like philosopher and three views of a tired old lion, who would appear and reappear in Dürer's many depictions of St. Jerome and his faithful feline friend. 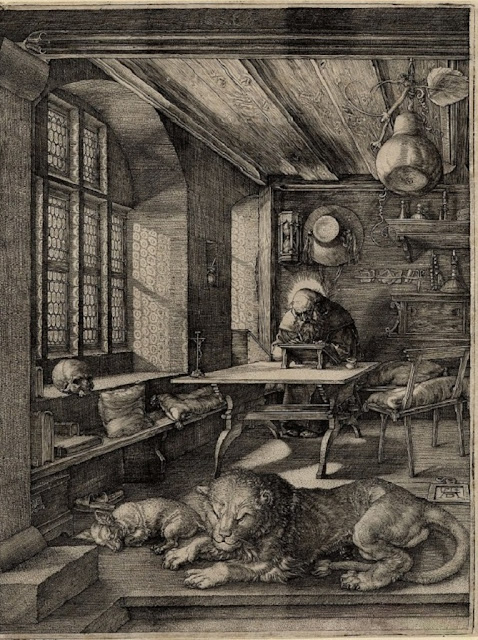 The Prestel volume displays a generous selection of Dürer's drawings, ranging from delightful doodles on letters to friends and sketches for later reference to supremely finished works. These were often done on carefully prepared colored paper, executed with watercolor and body color and brilliant touches of white for contrast. The celebrated Praying Hands (1503), masterfully demonstrates Dürer's drawing technique.

It should be noted that Dürer "drew" with a paint brush, as well as charcoal, pen and ink, and the pointed stylus for silverpoint, one of the most exacting and unforgiving artistic techniques imaginable, as noted in the 2015 exhibition at the National Gallery in Washington D.C. Graphite pencils had not yet been invented.

In their most accomplished state, Dürer's drawings must be considered as Exempla. While such an expertly executed drawing might serve as part of the preparatory stage for a painting, it was also a work of art in its own right. On a higher, even more profound level, Dürer's exempla were a means of communicating ideas and ideals, the very essence of Renaissance humanism. 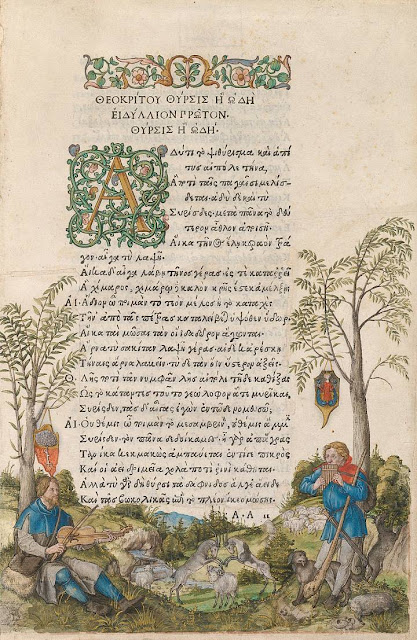 One of Dürer's greatest friends was Willibald Pirckheimer (1470-1530), a pioneer of the "New Learning" in Germany. Dürer created a special illustration for Pirckheimer's copy of the first print edition of the classical Greek philosopher, Theocritus. Executed in watercolor and gouache heightened with pen and ink and gold, Durer's image of musician-shepherds surrounds the opening page of Theocritus' Idylls. Dürer drew this charming, one-of-a-kind illustration much as medieval artists created elaborate initials to mark the beginning of hand-copied prayer books and bibles.

Although Pirckheimer's copy of Theocritus is a printed volume, its status is of supreme importance. It was printed in 1496 by Aldus Manutius in Venice. It was Manutius who established the first truly successful publishing company in Europe. The classical texts of the Aldine editions transformed scholarship because they were modestly priced and carefully edited. If one wanted to mark the moment when the Renaissance became a pan-European movement, Dürer's illustration for his friend's copy of Theocritus admirably performs that service.

Viewing Dürer's drawings as a totality, Cristof Metzger notes that Dürer's exempla "are ultimately conversation pieces, physical manifestations of the master's consummate artistic abilities whose purpose is to demonstrate this capacity to every visitor to the artists's workshop."

This is beautifully stated, but I would take it a stage-further. Dürer's drawings and prints are a means of dialogue between his time and our era - and those to come. And, when we look and reflect upon The Great Piece of Turf, we join with Dürer in a form of communication with the cosmic spirit, in short with God. 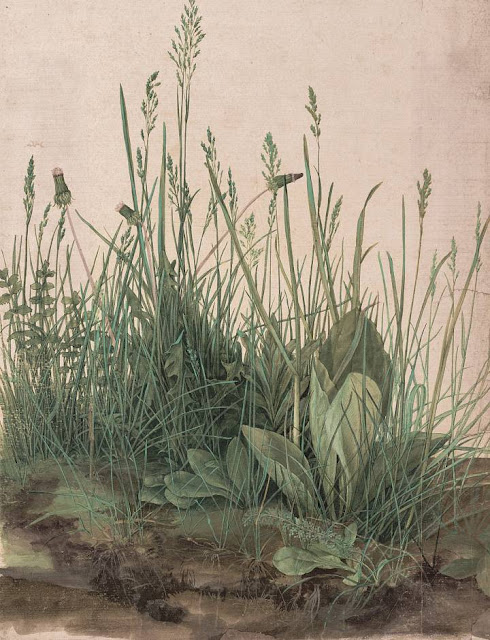 Here, in this stunning depiction of a small plot of soil and plant life, we can feel and partake of the life force of the universe. A two-dimensional picture, 16 x 12 3/8 in., created half of millennium ago, takes us to dimensions of time and the spirit almost beyond our ability to grasp.

Dürer's drawings enable us to probe another realm of the infinite, namely the character of humanity. 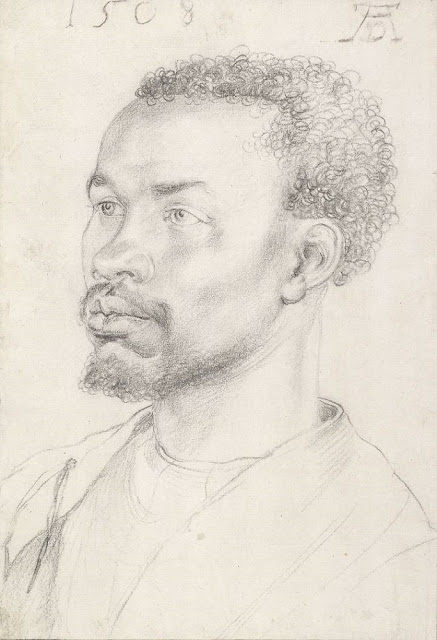 Albrecht Dürer, Head of an African, 1508

In a drawing dating to 1508, Dürer depicted the likeness of an African man of unknown origin. Dürer may have seen him in Venice during his recent trip or perhaps the man was a servant of an Imperial official visiting Nuremberg. We don't know the details, but we are given a higher degree of insight, straight into the heart and soul of this fellow human being, long dead and very much alive to us still.

Thanks to the exceptional quality of the illustrations of this Prestel book, viewing Dürer's art works on its pages is almost as rewarding as a visit to the Albertina Museum in Vienna!
If I have one criticism of this magnificent book, it is the abrupt, jarring manner in which the text comes to an abrupt halt.

In the final section, "Dürer the Storyteller", Christof Metzger discusses a number of late works, pen and ink depictions of incidents in the life and death of Jesus. We read how these remarkable drawings were not "preliminary drawings for a specific work but rather experiments for the workshop stock."

We turn the page, expecting more, only to confront the book's section of notes. It struck me as quite a jolt to suddenly be deprived of Albrecht Dürer's company after page-upon-page of stunning illustrations and spirited, compelling commentary. This book is an exhibition catalog, rather than a formal biography, so this word of censure is undeserved.

All the same, it was with a real sense of loss, that I finished this wonderful book. Was this how Dürer's family, friends and colleagues felt when they received word that he had died on April 6, 1528? I suspect so.

Fortunately, a heartfelt valedictory of Dürer is available in Paul Johnson's Art: a New History (2003). Commenting on the large trove of Dürer's letters, travel diaries and other documents which have survived the centuries, Johnson notes how these personal writings:

... reveal the enthusiasm with which the boy, then the man, embraced a career in art; the assiduity with which he studied its techniques and absorbed any knowledge relevant to its practice; the humility with which, despite his obvious and overwhelming gifts, he approached art, and the generosity with which he helped others who shared his love of it.

"Dürer was the archetypal man of art," Johnson affirms. "He loved the world and nature, and sought to reduce it to orderly truth by his skill at putting real things and creatures in two dimensions." 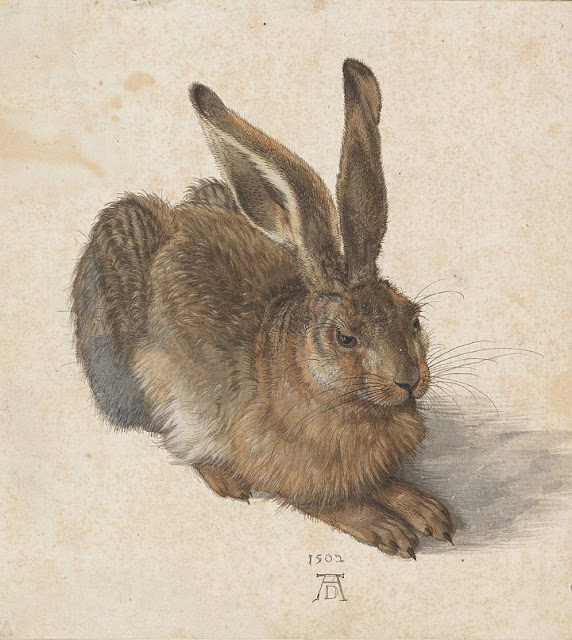 In doing go, Dürer reached beyond tangible, visible reality to a higher level of creation. Here physical nature was infused with spirituality; transcendental themes took the shape of earthly creatures, birds, animals, human beings, which somehow - even now, five centuries after Dürer's death - do not seem out-of-place in heaven.

Posted by Art Eyewitness at 3:07 PM