Sean Scully: the Shape of Ideas at the Philadelphia Museum of Art 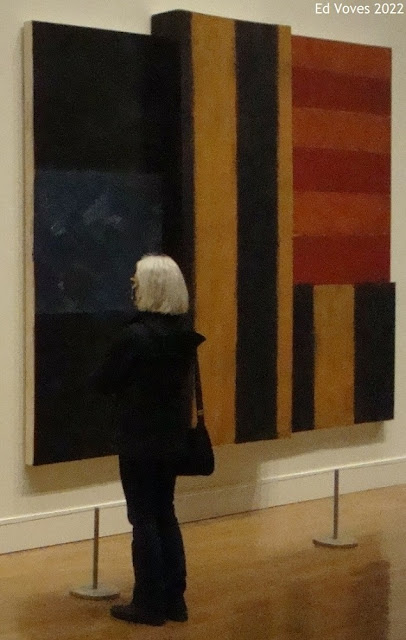 Sean Scully: the Shape of Ideas

The Philadelphia Museum of Art

Sean Scully came of age as an artist during the 1970's, just at the moment when painting was proclaimed to be "dead." Minimalism, taking its cue from the work of Ad Reinhardt (1913-1967), discarded narrative content, spiritual meaning and the inner life of art.

"The more stuff in it," Reinhardt had written, "the busier the work of art, the worse it is. 'More is less.'"

How is a young artist, trying to make his or her mark, to contend with such absolutist affirmations? How can painters, in the 1970's or now, express themselves when art is defined by "elders and betters" of the preceding generation? It is an unenviable position, rather like standing on a riverbank, watching as a bridge is burned before you can cross.

A new exhibition, Sean Scully: the Shape of Ideas at the Philadelphia Museum of Art, recounts how Scully made it to the opposite shore in a courageous act of artistic self-determination.

Beginning with several galleries devoted to Scully's prodigious skill in printmaking, the retrospective at the Philadelphia Museum of Art charts the course of Scully's five-decades long career, still very much a work in progress. From early Minimalist works to a 2021 painting devoted to the emotional effects of the Covid-19 pandemic, the exhibition shows how Scully has raised Abstract art to new levels of achievement, aesthetic and spiritual. 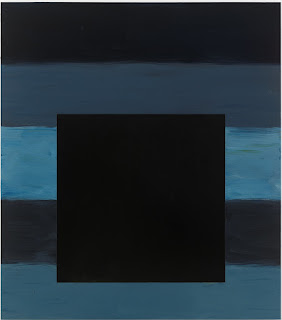 It should come as no surprise that Scully devoted a work to the theme of Covid-19. A deeply sensitive and humane man, Scully placed a dark, disturbing form in the center of Black Blue Window. The title identifies it as a window, a portal, but whether it looks onto the land of the living or the dead, is left for the viewer to decide.

The global crisis of Covid-19 directly impinged on the Scully exhibition. Sean Scully: the Shape of Ideas was originally was scheduled to open in Philadelphia during 2020, following its debut at the Museum of Modern Art of Fort Worth, Texas. With great determination, Scully, Amada Sroka and Timothy Rub, curators at the Philadelphia Museum of Art, persevered in mounting this splendid display of Abstract art and ideas. 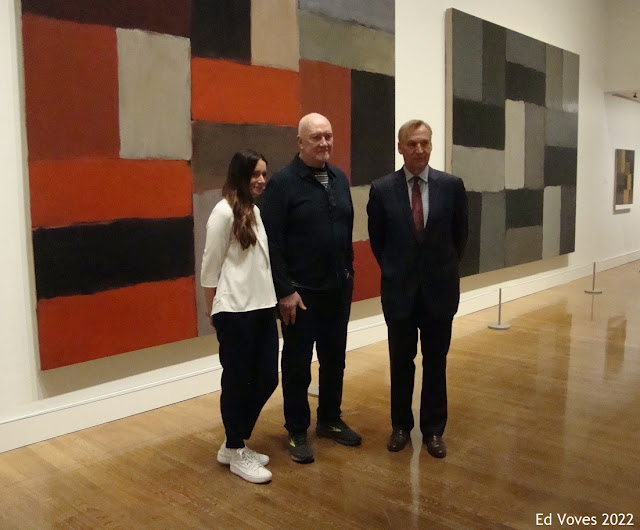 Struggle and hard-won success are constant themes of Sean Scully's life. He was born in Dublin in 1945, but raised in London during the bleak post-Blitz years. At the press preview, Scully discussed his early life. Scully recounted how he worked in the construction trade as a youth, spending his lunch hour at the Tate Gallery studying the masterpieces in its galleries. 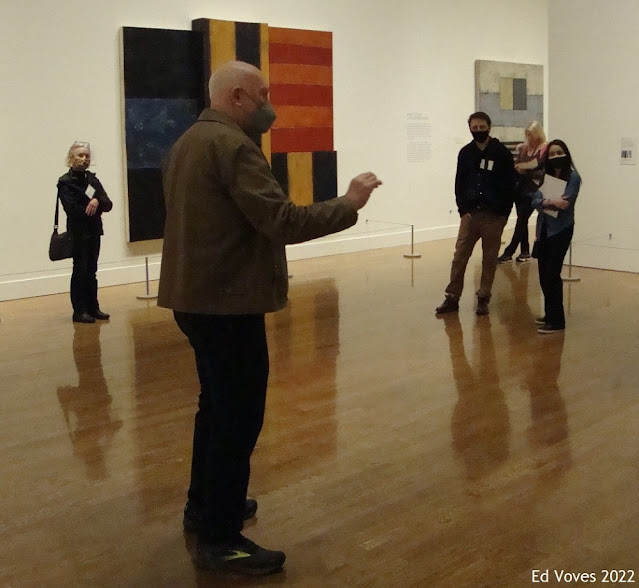 After many rejections, Scully finally secured a place at the Croyden College of Art in London. He followed his study at Croyden with a fellowship at Harvard University in 1972. This introduction to the American art scene led Scully to move to the U.S. in 1975.

Sculley's early Minimalist work is surveyed in several paintings in the exhibition. I was particularly impressed - and bemused - by Green Light, painted during the period of Scully's fellowship year at Harvard. Scully used tape to map out grid patterns. He then used spray paint to create layered stripes and blocks of color, based upon a limited palate of greens, yellow and black. The result is a hypnotic visual pattern which draws the viewer's gaze to the grid and then locks it down.

According to the canon of Minimalism, the process of viewing a work such as  Green Light is based upon the sensory experience of pure color and pure form. There is no story, much less a moral to the story. "What you see," in the words of Frank Stella, "is what you get."

Perhaps such an interface was Scully's objective back in his younger days. Yet, what struck me immediately about Green Light was how it manifested the sense of alienation felt by so many people during the 1970's.

Reflecting upon Green Light, I remembered my own shock at reading reviews of B.F. Skinner's Beyond Freedom and Dignity, published in 1971. This was the "big" book of the years when Scully first came to the U.S. Celebrated by some, reviled by others, Beyond Freedom and Dignity asserted that the future of humankind would not be the Age of Aquarius but rather an era of scientific regimentation. 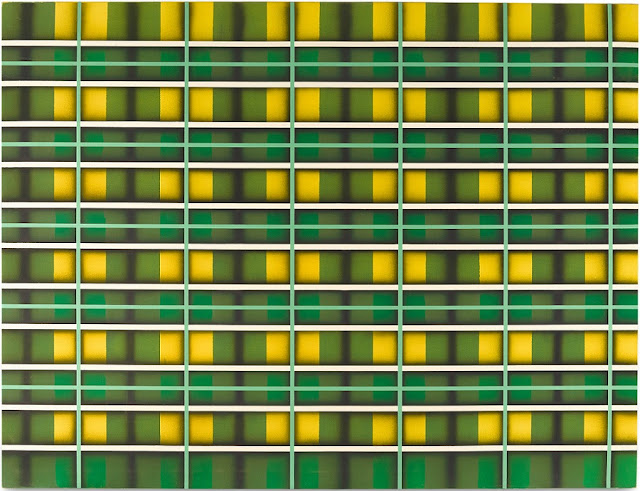 Green Light strikes me as a jarring visualization of Skinner's world view, of society determined by the workings of a "technology of human behavior" rather than being influenced by "states of mind or feelings."

Was Scully painting Green Light with Skinner's authoritarian theories in mind?There are no indications of a direct or conscious link. Yet, Scully had to be aware of Beyond Freedom and Dignity. He is a well-read man, drawing insights and impressions from all points of the cultural compass.

I certainly believe that beneath the tape-measured grid and layers of spray paint of Green Light, there are "states of mind or feeling" that could not be repressed by the creed of Minimalism.

For some years after Green Light, Scully continued to devote himself to Minimalist works. The inevitable revolt came in 1981 with Backs and Fronts. 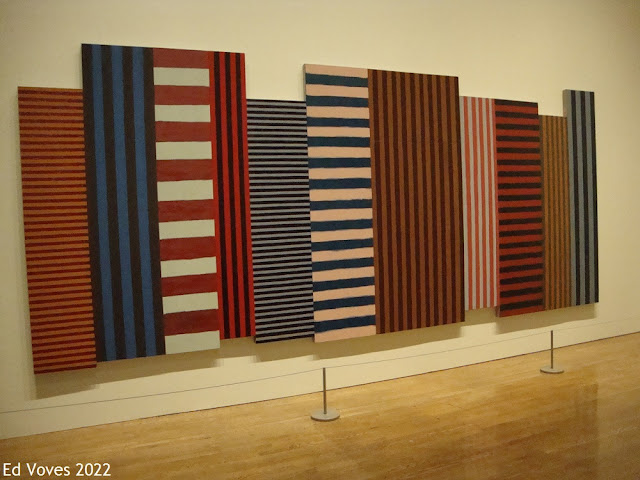 Though a work of Abstract art, Backs and Fronts is based on depths of feeling and social observation. In his comments at the press preview at the Philadelphia Museum of Art, Scully said that the painting reflects the hyper-competitive, dog-eat-dog, world of New York City which he witnessed while pursuing his art career.

Backs and Fronts was never intended as a painting of stripes about painting stripes. Initially conceived as an homage to Picasso's Three Musicians, Scully's work took on a life of its own until it became a major assertion of art in its time-honored sense, as a bold statement of an artist's views and beliefs. 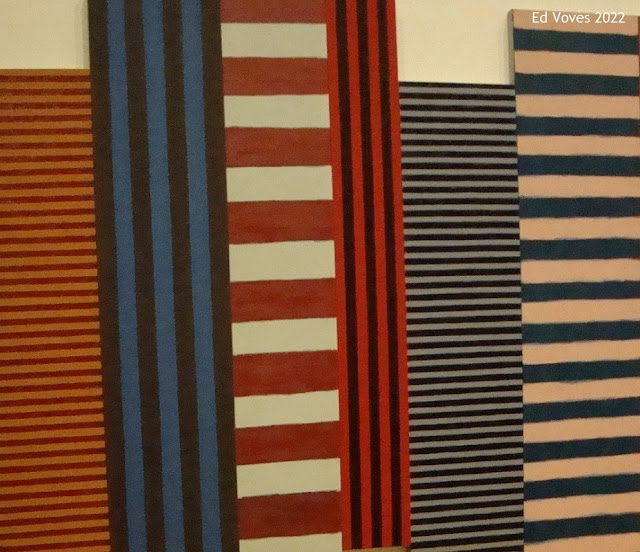 The stripes we see in Backs and Fronts confront and clash with each other at every turn. At no point, do we see the slightest hint of conjoined activity, of "socially modified behavior." Robert Hughes noted of Scully's signature stripes that they possessed a feeling that was "something fierce, concrete and obsessive, with a grandeur shaded by awkwardness..."

If Backs and Fronts has a message, was Scully applauding the unrestrained individualism of American society, New York-style, or urging restraint and caution? Looking at his works since this pivotal, breakthrough painting, the act of questioning appears to be far more important to Scully than providing "one-size-fits-all" answers.

Scully has said that he is "very interested in disharmony because I want the painting to be unresolved but not unresolvable. And I want the person looking at it to try and put it together..." 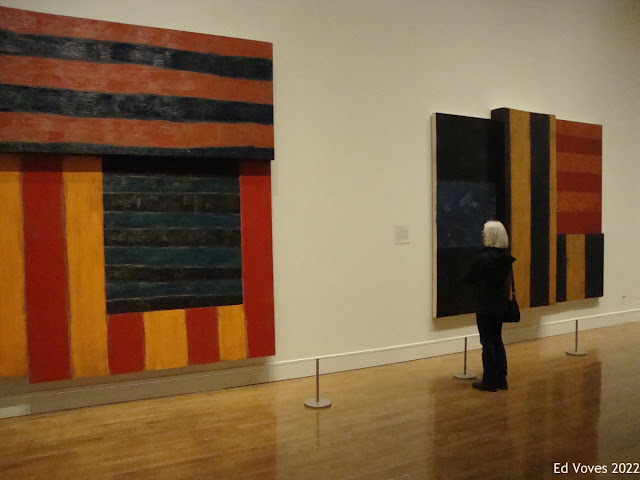 "I made a painting called Falling Wrong and someone asked me why and I said, 'Cause falling right only has one possibility... but falling wrong has a thousand options.' "

Pale Fire, 1988, is another work in the exhibition which challenges the imagination of the viewer. It takes its title from Vladimir Nabokov's 1962 novel, a complex story involving scholarly commentary on a 999-line epic poem. The final line of the poem is missing or perhaps never written, as the poet had died mysteriously. It is never clear whether the analytical comments resolve the riddle of the poem or, rather, confuse the issue. 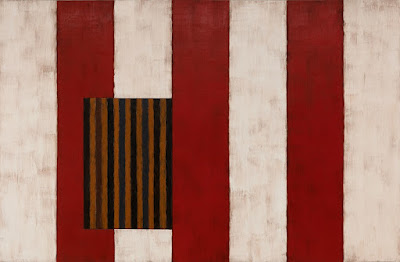 Scully's Pale Fire reflects the enigma of the novel. The bold, vertical bands of red and white are disrupted by an inset block of narrow black and ochre stripes. These look like the bars on a prison window, keeping the inner meaning of the painting under lock and key. If this is indeed so, Scully reserves the answer for us to decide.

Many of the titles of Scully's paintings may leave viewers wondering as to their meaning. A strong sense of organic life, however, provides the foundation of Scully's art. He visited Morocco early in his career, where he observed traditional forms of craft-making, especially the making of vividly- hued fabrics. This experience enriched his sense of color creation. Later, visits to Mexico and to historic sites like the isle of Iona, birth-site of Christianity in Scotland, further influenced his life and art.

From his visits to Mexico, Scully conceived the idea of carefully conceived and orchestrated blocks of color, "walls of light." These are most impressive, but, to do them justice, you really have to spend time in their presence. 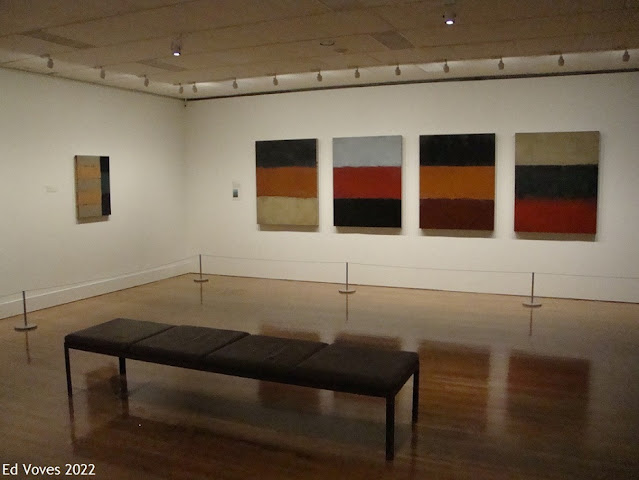 The color of these works, carefully modulated, radiates from the gallery walls. And in settings like the Dorrance Gallery at the Philadelphia Museum of Art, Scully's paintings seem to hover in mid-air, exerting a spiritual presence that is almost palpable. 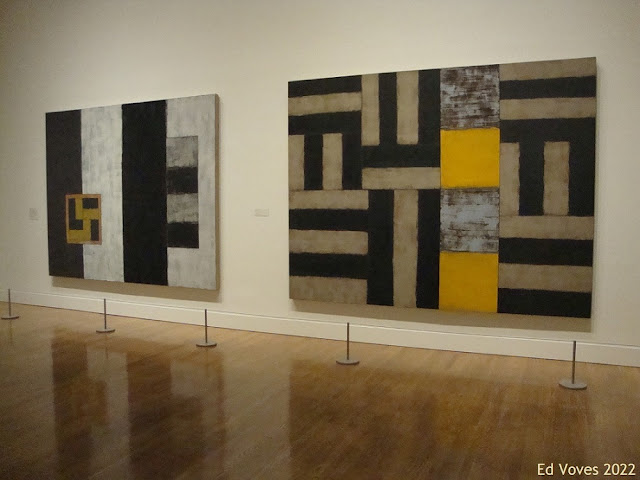 As noted earlier, Scully often places insets of contrasting color tones, like the block of dark stripes in Pale Fire, in unusual, unsettling positions on his canvases. These may confound or simply amaze the viewer, as in the blocks of gray-blue, streaked and shadowed with dusky brown, which appear, like specters of a Whistler nocturne, in Vita Duplex, 1994. 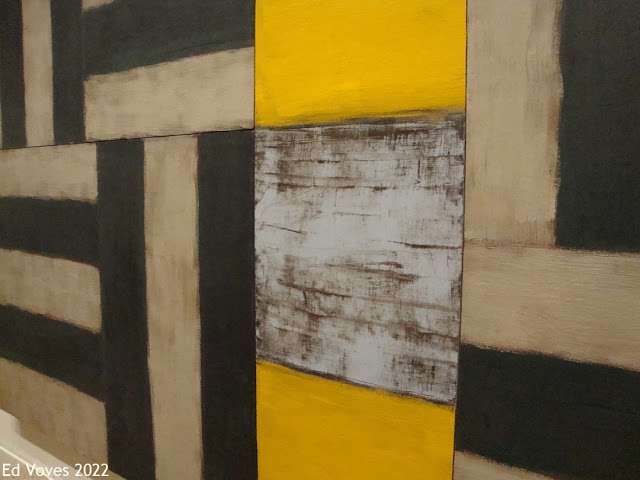 Over the last ten years, Scully has created a number of works bearing "Landline" in the title. These are best appreciated as Abtract "landscapes" in the way that depictions of the natural environment affect our mood, emotions and perception of the world around us. Thus, these Landlines are more in the spirit of paintings by J.M.W. Turner than Mark Rothko. 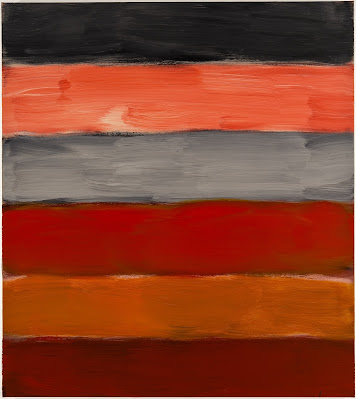 Being a life-long fan of Turner's art, I was much impressed with the Landlines on view in the exhibition. The painting in this series which most appealed to me, however, was more in keeping with the oeuvre of another Romantic-era master, Caspar David Friedrich. I determined to get a photo of Scully as he commented upon this painting, Landline North Blue (2014).

My digital camera had other ideas and try though I might, adjusting the settings, I could not get it to work. The opportunity passed - or seemed to.

Fortunately, Mr. Scully graciously agreed to return to pose before Landline North Blue for one more try after the press preview had concluded. This time, the camera worked and I was able to get a couple quick snaps. 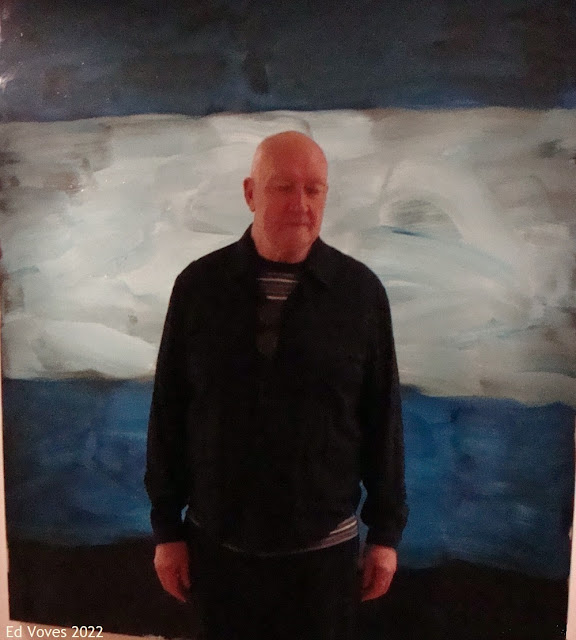 Here is Sean Scully standing before his magnificent painting, his face composed in meditative reflection. His eyes are focused intently, as he ponders how to translate his thoughts into gestured brushstrokes.

This is how an artist looks, as he shapes his ideas, thus validating the title of this wonderful exhibition at the Philadelphia Museum of Art. This is the face that the painting on the easel "sees" as Sean Scully transforms it from a length of canvas or linen into a "wall" of light, resonating with the breath of life and spirit.

Images courtesy of the  Philadelphia Museum of Art

Ed Voves, Photo (2022) Sean Scully and the curators of the Sean Scully: the Shape of Ideas exhibition. From left: Amada Sroka, Sean Scully, and Timothy Rub, Director Emeritus of the Philadelphia Museum of Art.

Ed Voves, Photo (2022) Gallery view of the Sean Scully: Shape of Ideas exhibition at the Philadelphia Museum of Art. Sean Scully lecturing at the press preview.

Ed Voves, Photo (2022) Gallery view of the Sean Scully: Shape of Ideas exhibiton at the Philadelphia Museum of Art. The works shown are Pink Blue, 1985, Oil on Linen over Panel: 32 x 24 inches, Collection of the Artist, and the four panels of Land Sea Sky, 2000, Oil on Linen, 50 x 40 inches (each). Private collection.

Posted by Art Eyewitness at 9:53 AM