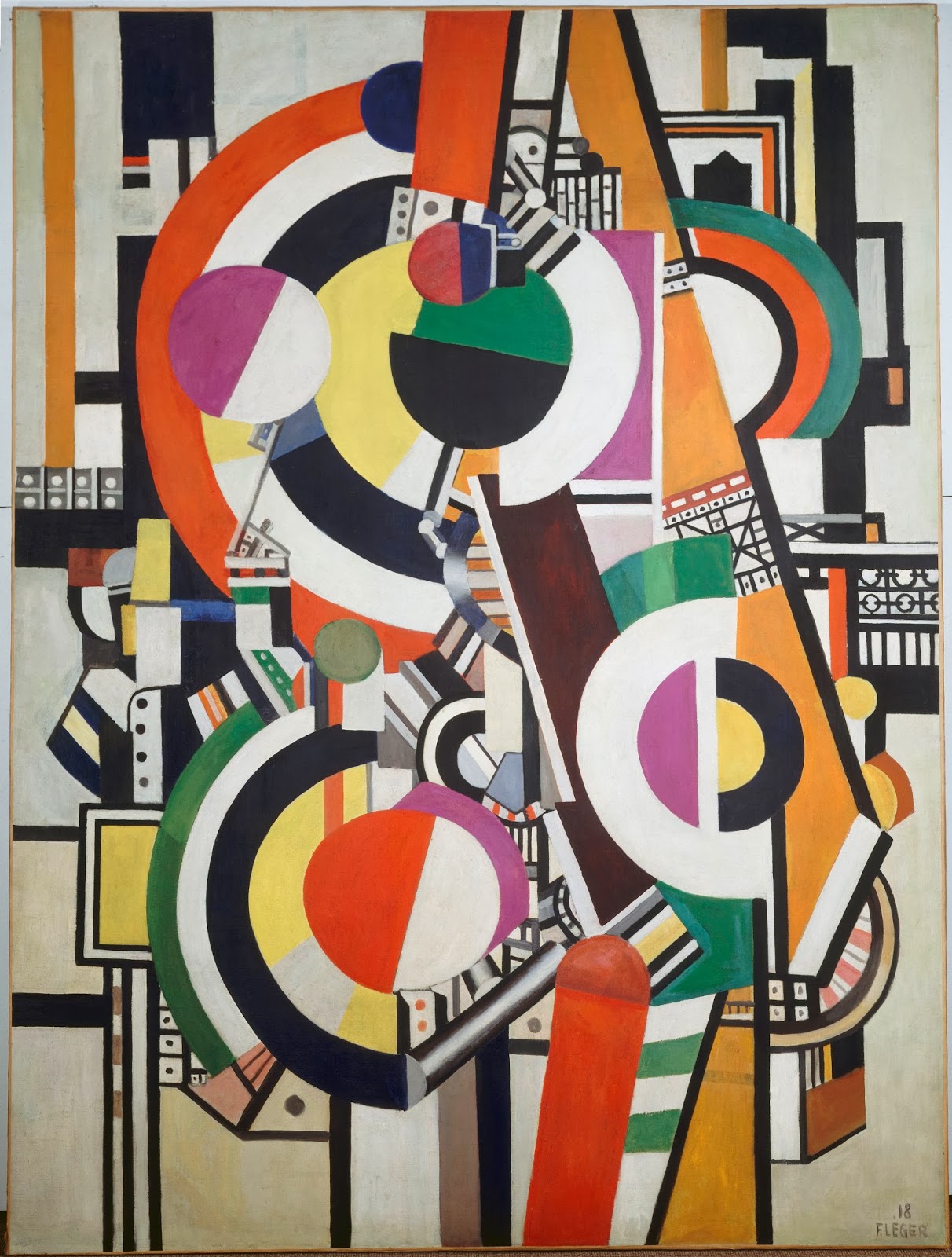 Modern art came of age during the aftermath of World War I, during the troubled decades when the dragon's teeth were sowed leading to World War II.

Two insightful exhibitions currently on view at the Philadelphia Museum of Art reveal the range and impact of avant-garde art during the 1920's and 1930's. Léger - Modern Art and the Metropolis and The Surrealists: Works from the Collection are complementary exhibitions, as well as first rate presentations of art on their own terms. Together, these exhibits demonstrate that modern art's power - to challenge, to contradict and to inspire -was still very much in evidence during the pause between world wars.

Fernand Léger (1881-1955) is one of the great names in modern art and his 1919 painting, The City, is one of the masterpieces of Modernism. Yet, Léger is a difficult artist to classify. It is impossible to assign him to any particular "ism." Fascinated by Cubism when he arrived in pre-war Paris, Léger never became a Cubist painter. Most surprisingly - for a man who spent three years on the Western Front and was badly wounded in a poison gas attack - Léger was energized by his wartime experiences. There are some elements or echoes of Surrealism in his painting. Yet, Léger never was a Surrealist either.

Léger might well have joined the ranks of traumatized "Lost Generation" survivors for whom the rising art movement, Surrealism, became something approaching a religious creed. Léger was anything but disenchanted. He found renewed faith in the people of France and was intrigued with modern technology as can be seen in a vibrant painting from 1918, Disks.

A year later Léger he painted his masterpiece, The City. 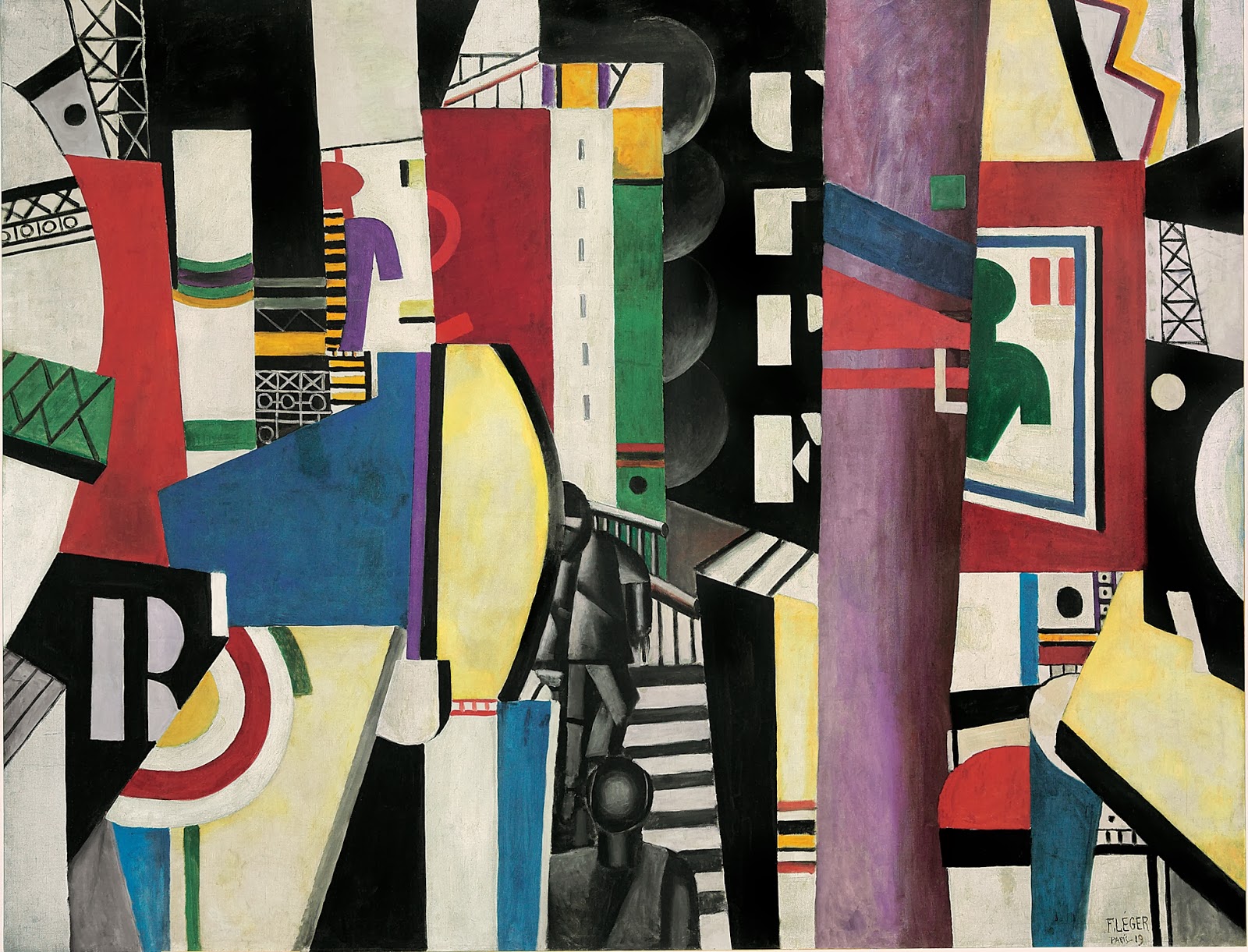 The City, 1919. Fernand Léger
Set on a vast, horizontal canvas, The City shows two figures on a flight of steep steps. From such a height, they will have a vantage point to survey the surrounding urban landscape. Instead of merely viewing the city, however, they are engulfed by it. A tidal wave of images of 20th century Paris, street signs, neon lights, glimpses of steel girders, faceless people from the teeming, faceless crowds on the boulevards emerge and confront the viewer in quick succession.

The key elements of modern urban life are the immense variety of visual imagery that city life provides and the speed at which these "moving pictures" come, go and are succeeded by a fresh set of images. A third element is the dizzying array of colors that surround a city dweller by day, followed by the polarizing effect of harsh artificial light vs. the ink black shadows of night in the city. All of these "facts" of modern life are depicted on Léger's The City.

Léger came as close as any artist ever did to evoking the sense of movement of the modern urban environment. The City achieved the same effect as did the flickering images displayed on film screens. A few years after he painted this pivotal work Léger wrote of the swift ebb and flow of urban existence, stating that "a ‘slice of life’ seen from a café terrace is a spectacle."

The images in The City, however jarring the effect of seeing them, are all identifiable. The street signs and the steel girders shown in the painting are not dissolving into a more elemental structure as in Cubist painting. Léger endeavored to comprehend urban life, in modern visual terms. He was celebrating The City - not dismantling it.

In painting The City, Léger might well have been answering the call in 1918 by the French poet and filmmaker, Jean Cocteau, for le Rappel a l’ordre. Cocteau's "Call to Order" summoned the civilized world to its senses amid the shell-torn insanity of trench warfare. Artists, from Pablo Picasso to Ludwig Mies van der Rohe, looked back to Europe's classical past and began to reconfigure their paintings, statues and architectural plans in the spirit of néoclassicisme.

By imparting elements of representational art to his painting, Léger could be said to have answered this "call to order." In fact, Léger was charting his own, inimitable course. Léger described his personal philosophy and approach to painting:


To be free and yet not lose touch with reality, that is the drama of that epic figure who is variously called inventor, artist or poet. Days and nights, dark or brilliantly lit, seated at some garish bar; renewed visions of forms and objects bathed in artificial light... He fills himself with all this, drinks in the whole of this vital instantaneity which cuts through him in every direction. He is a sponge; sensation of being a sponge, transparency, acuteness, new realism."

At that the same time that Léger explored his personal path to a "new realism," a group of poets and artists pioneered a parallel path, Surrealism. Based in part on the iconoclastic art movement founded during the First World War, Dada, the Surrealists rejected rationalism and conscious perception as the proper vantage points for exploring life. Instead, they probed deep within the human unconscious state.

Surrealism as a literary term can be traced to the play, Les mamelles de Tirésias by the poet, Guillaume Apollinaire. One of the literary lions of "left bank" Paris, Apollinaire was recuperating from a head wound sustained on the Western Front, when his play was performed to a storm of criticism in June 1917. The play's anti-authoritarian stance was not well received as France braced for the final show-down with the Germans.

Apollinaire died during the Spanish Influenza epidemic in 1918. Once the war ended, previously suppressed disgust with its senseless brutality soon surfaced. Cocteau might urge a return to classical order and artists like Léger discover an individualistic path to creative expression. For André Breton, a young poet who had served in a psychological hospital during the war, Surrealism provided the conceptual basis to comprehend the incomprehensible.

André Breton (1896–1966) was a doctrinaire, generally humorless intellectual. But he did have the great ability to get his point across and it was a message with widespread appeal. In 1924, Breton's "Manifesto of Surrealism" set forth the following definition:


SURREALISM, n. Psychic automatism in its pure state, by which one proposes to express—verbally, by means of the written word, or in any other manner—the actual functioning of thought. Dictated by thought, in the absence of any control exercised by reason, exempt from any aesthetic or moral concern. 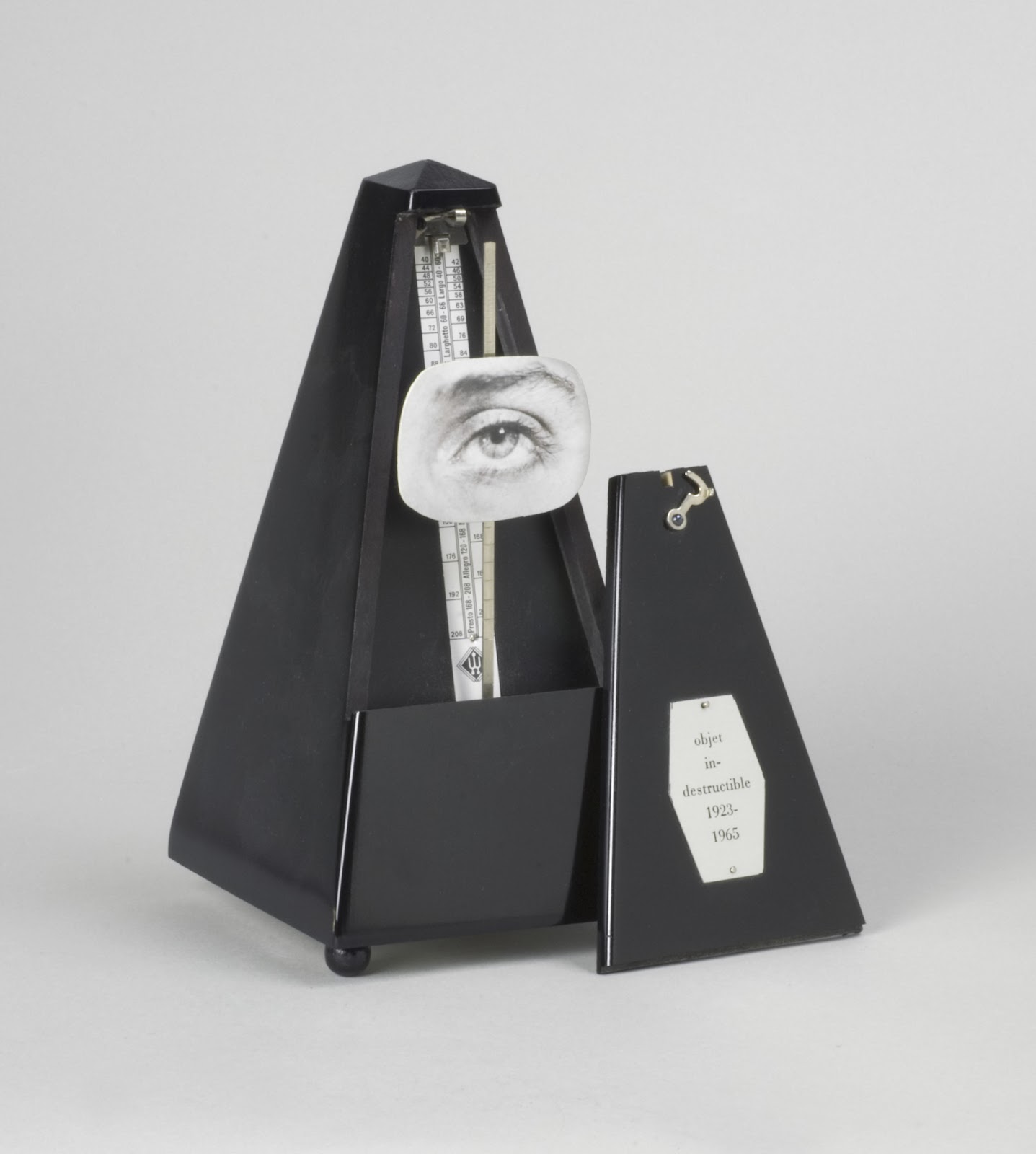 Indestructible Object, 1963 (replica of destroyed 1923 original). Man Ray
"Or in any other manner ..." applied to the many artists who embraced Surrealism as the ideological foundation for their work. Surrealism - at least initially - gave wide scope to many forms of artistic creation. From Man Ray's metronome bearing the image of an all-seeing eye to Giorgio de Chirico's blank-faced, blank slate, The Poet and His Muse, artists could create works "dictated by thought," their own thoughts. It was a powerful premise and Surrealism spread to artistic circles in Latin America, the United States and Japan. 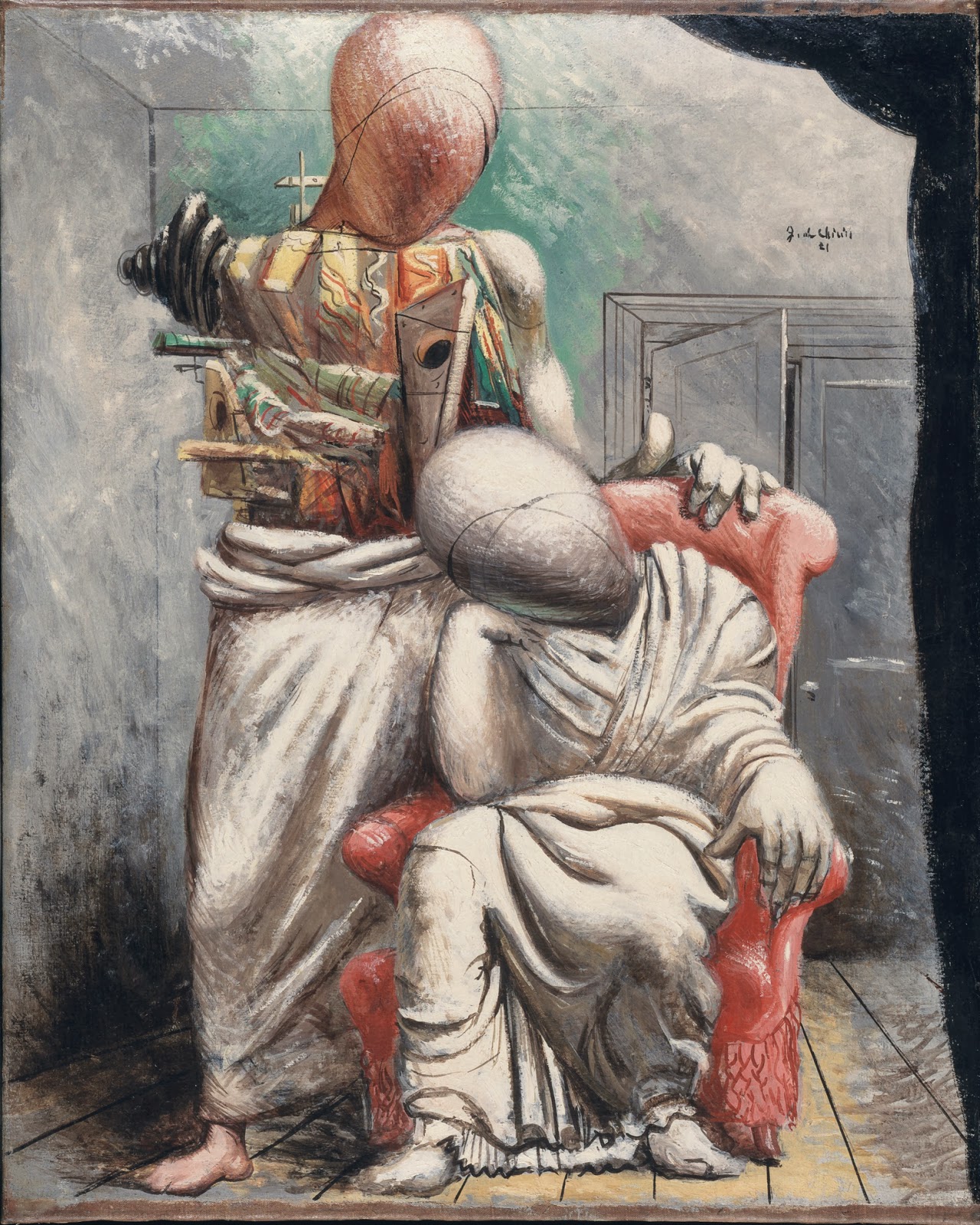 The Poet and His Muse, c. 1925. Giorgio de Chirico
Surrealism made a powerful impact in Spain. Having escaped involvement in the slaughter of World War I, Spain began to disintegrate politically during the 1920's, a downward spiral that led to the outbreak of the Spanish Civil War in 1936. It was a threatening climate in which alarming images and irrational thoughts were bound to surface. Picasso, never a formal member of the Surrealists, Joan Miró and Salvador Dali all painted major works of Surrealist art.

The collection of the Philadelphia Museum of Art, from which the present exhibition is entirely drawn, is richly endowed with the work of Miró. Several of the signature paintings from his early years are on view. Miró was a native of the province of Catalonia and Hermitage and Barking at the Moon fondly recall boyhood experiences. Then came a period of personal crisis in the late 1920's when Miró declared that he wished to "assassinate painting." 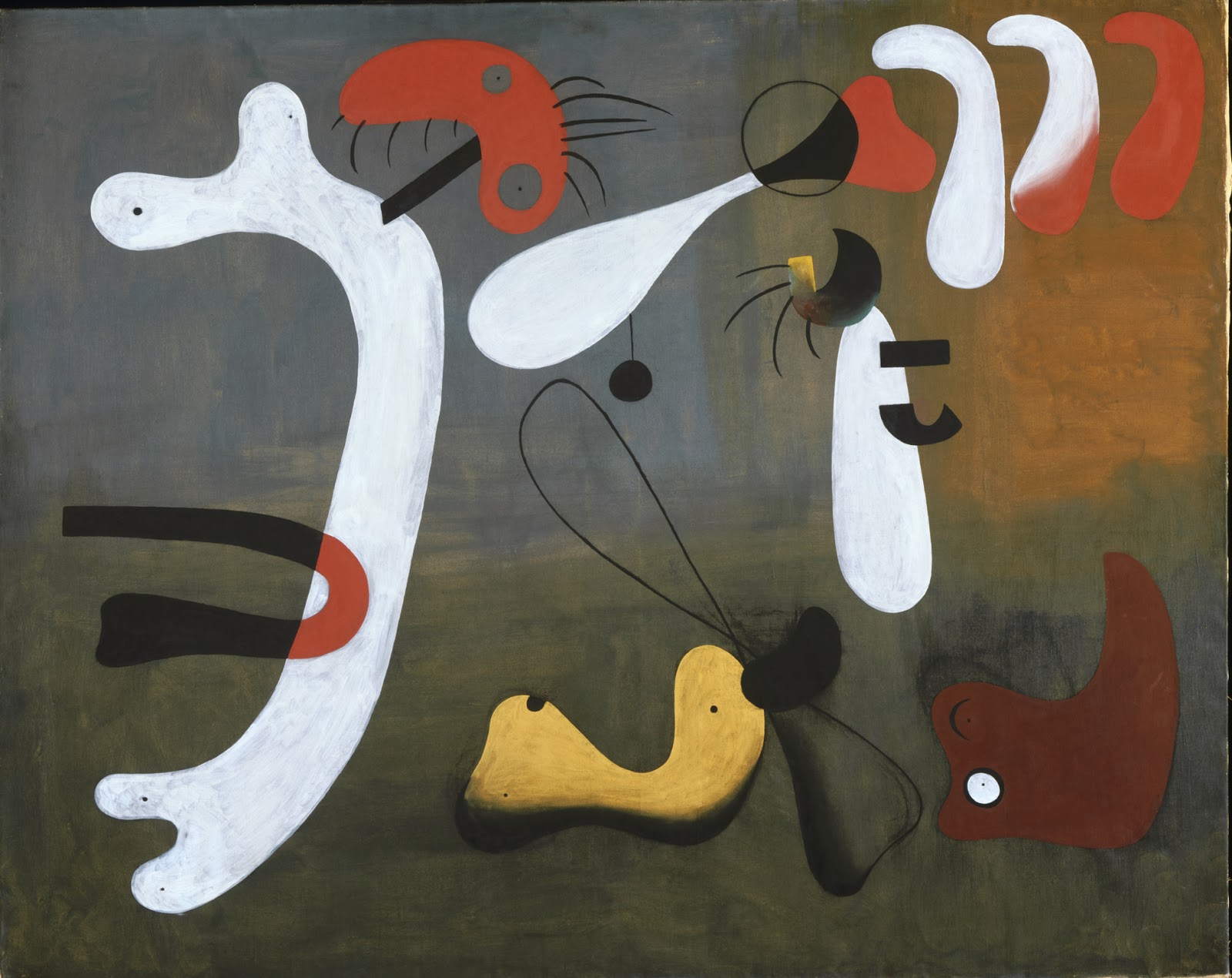 Painting, 1933. Joan Miró
﻿
In 1933, Miró produced several oil paintings, each simply called Painting. They are major works and are entirely open to interpretation. Do they merely reflect Miró's use of collage during this period or are they indicative of deeper, more personal issues, lurking unresolved in his subconscious? Miró's biographer, Roland Penrose, discovered no sure answer to these questions, but he did write quite movingly that Miró created symbols in these works "that speak to us in a way that is timeless and universal."

We are on firmer ground with Salvador Dali's Soft Construction with Boiled Beans (Premonition of Civil War). This grim fantasy on war clearly pointed to the looming strife that would wreak havoc upon Spain. But this work also underscores the previously hidden fault lines running through Surrealism. One man's dream might be another's nightmare. The political principles of one artist could well be heresy to the ideology of the group. 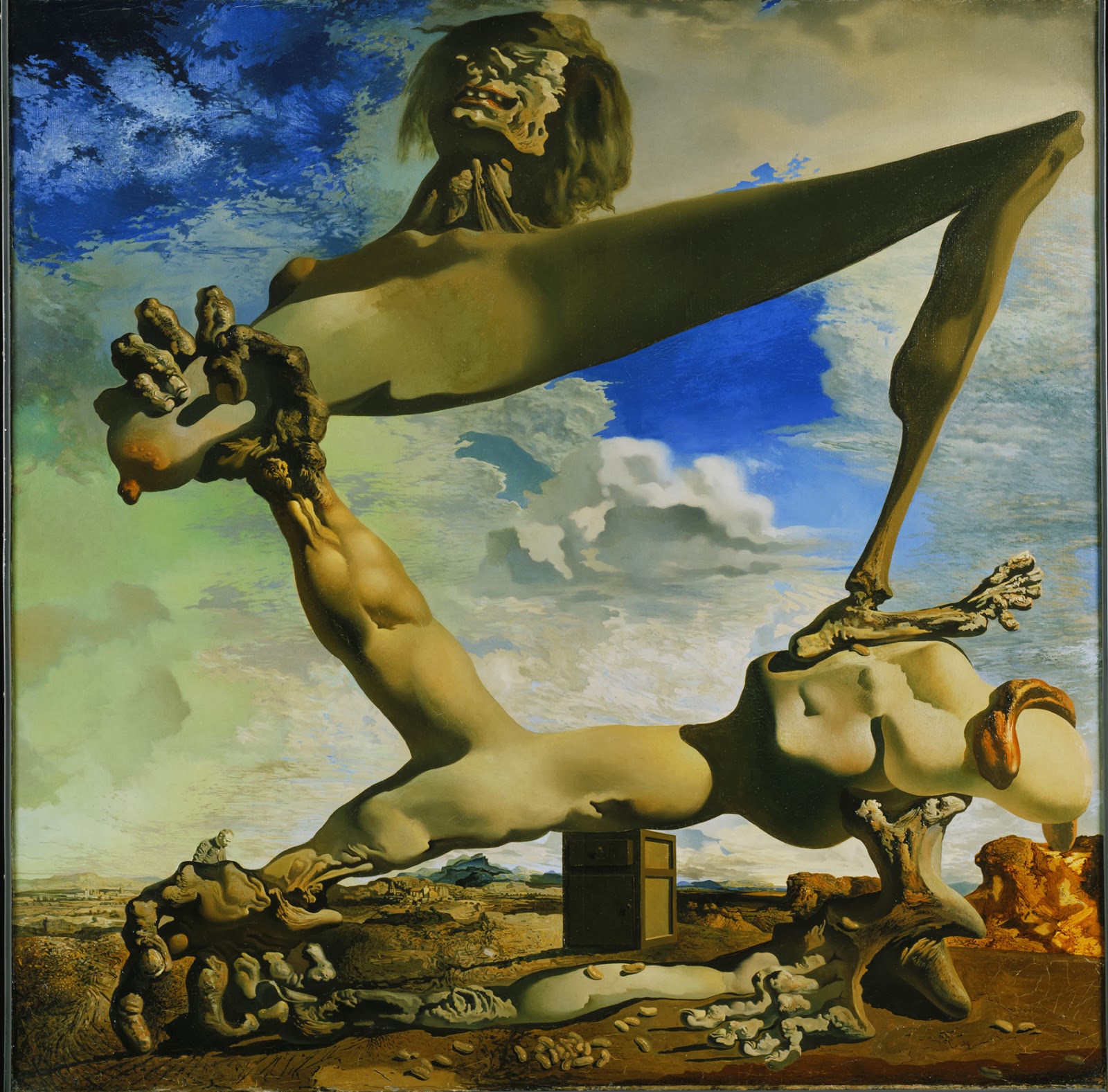 Breton, after initially welcoming Dali to the ranks of the Surrealists, turned against him by 1936, the year that Premonition of Civil War was painted. Breton, an avowed Marxist, expelled Dali from the group because of Dali's conservative, pro-Franco stance.

Given the repellent, Fascist nature of the Franco regime, one can sympathize with Breton's position. But Surrealism was defined in Breton's own words as being "dictated by thought, in the absence of any control exercised by reason, exempt from any aesthetic or moral concern." Once Breton the Marxist ideologue started dictating in place of unconscious thought, Surrealism's days as a constructive force in the arts were numbered.

Given its aim to showcase the worldwide dimensions of Surrealism, the exhibit at the Philadelphia Museum of Art is not the proper forum for discussing the ramifications of the Breton-Dali controversy or the other disputes that convulsed the Surrealists. The exhibition based on Fernand Léger's The City, by a fortunate turn of events, provides an excellent opportunity to test the "group think" of both Surrealism and Cocteau's "Call to Order." 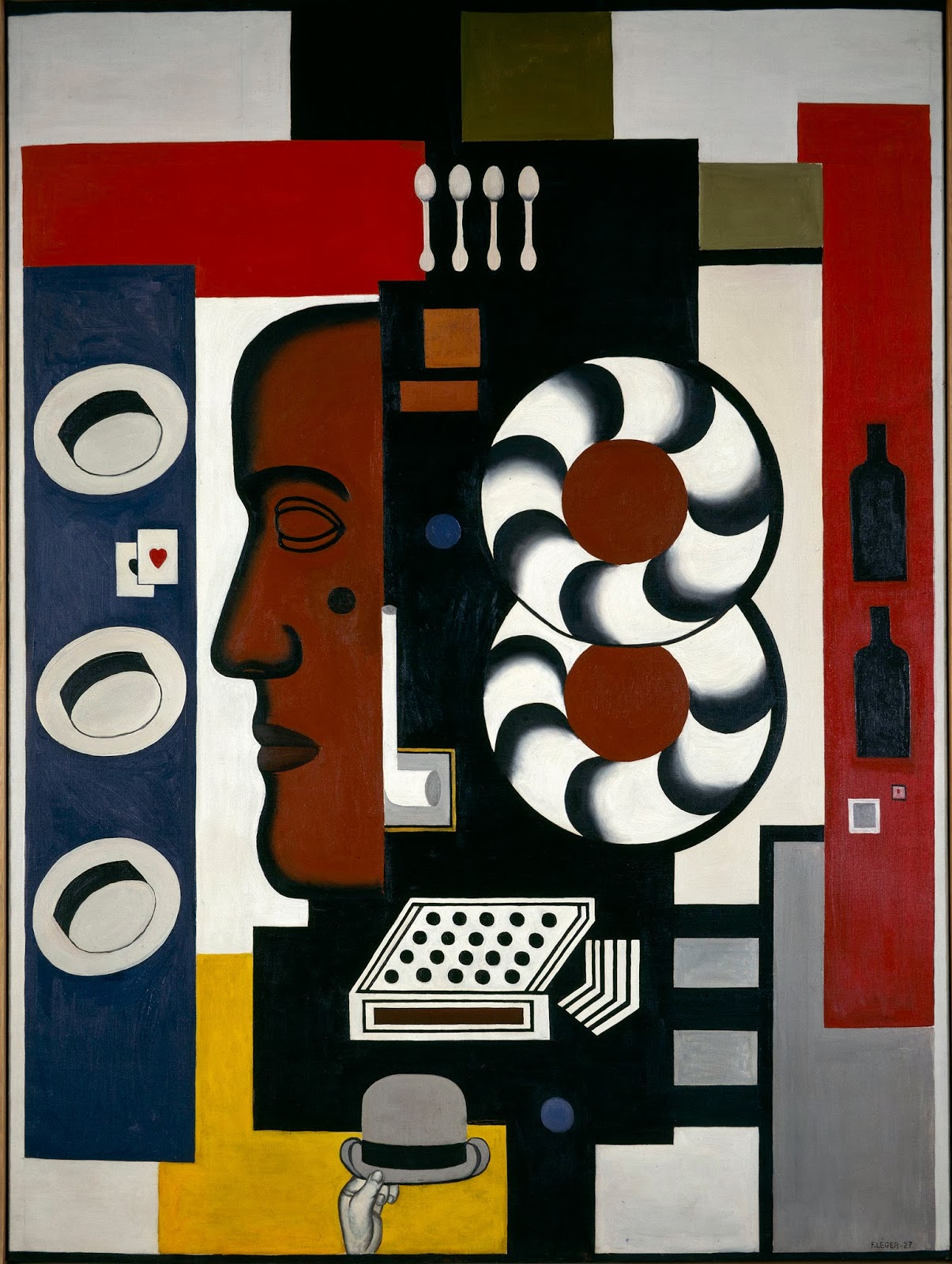 Composition with Hand and Hats, 1927. Fernand Léger
﻿
Léger, like Breton, was a Marxist. Like Cocteau, he tried to construct a meaningful foundation for Modernism after the horror of the First World War. In both cases, he acted as an independent artist, as an individualist rather than a cultural commissar. If we look at Léger's 1927 painting, Composition with Hand and Hats, we could be viewing an icon of Surrealism. If we re-read Léger's words, quoted above, we are confronted with a manifesto as bold as anything that Breton or Cocteau uttered.

Fernand Léger, by virtue of his individualism, did not make an impact on the art scene of his time comparable to that of Breton the "Pope of Surrealism." The superbly mounted exhibition at the Philadelphia Museum of Art suggests that Léger has much to offer to the contemporary world, starting with his inspiring vision, "To be free and yet not lose touch with reality..."

Images courtesy of the Philadelphia Museum of Art