Girl with a Pearl Earring at the Frick Collection 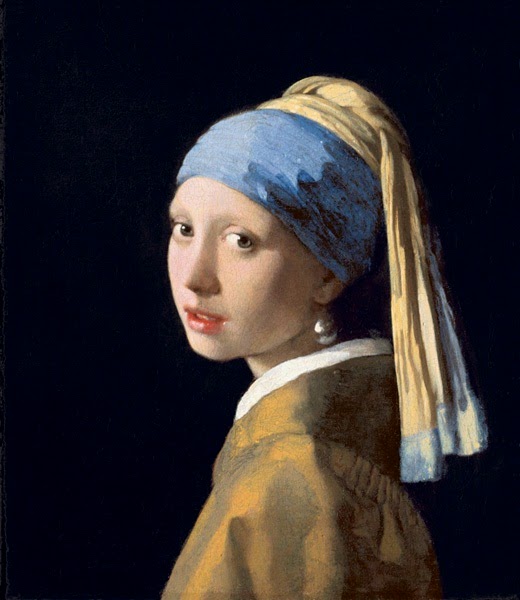 Vermeer, Rembrandt, and Hals: Masterpieces of Dutch Painting from the Mauritshuis


When I recently visited the Frick Collection in New York City, there was a line of visitors "queuing-up" as the English say, at the entrance. The line stretched nearly a block long and was continually reinforced with new art lovers anxious to get in.
The exhibition at the Frick, Vermeer, Rembrandt, and Hals: Masterpieces of Dutch Painting from the Mauritshuis, is certainly worth the wait. But I suspect that very few people in the daily throng at the door to the Frick come to see Nicolaes Maes' genre masterpiece, The Old Lacemaker, or even the clutch of major works by Rembrandt.

The majority of the art lovers in the line at the Frick come to pay homage to one of the true "beauties" of Holland. They are there to see Johannes Vermeer's Girl with a Pearl Earring.

This celebrated character study or tronie is given the honor of its own separate gallery. It is a sensible curatorial decision because many visitors approach Girl with a Pearl Earring with a sense of visible anticipation, even with awe, and most want to linger. Some come back for a second or even a third look. Girl with a Pearl Earring exerts a magnetic force, drawing people to her, making it difficult for them to break free.

There are a number of reasons for the magnitude of the attraction of Girl with a Pearl Earring. We know absolutely nothing about this beautiful, enigmatic woman. For that matter, we know very little about Vermeer himself. The painter from Delft kept to himself, holding the world - and his creditors - at bay, while painting one masterpiece after another.

There is also the legend of Girl with a Pearl Earring. The painting lingered for decades, unremarked and unrecognized as a work by Vermeer until the mid-1800's. It was purchased for the princely sum of two guilders and change by Arnoldus des Tombe in 1881. Des Tombe was encouraged by the art historian Victor de Stuers, a passionate advocate of the work of Vermeer, whose reputation had earlier been eclipsed by Rembrandt and Hals.

Girl with a Pearl Earring was donated to the Royal Collection of the Netherlands. It is housed in the museum known as the Mauritshuis, currently being renovated. Girl with a Pearl's visit to museums in the U.S., of which the Frick is the last venue, is a result of this museum rehab. We probably will not be seeing her again in the U.S. any time soon.

Who is this young woman in the improvised turban, this "Mona Lisa of the North" as some now call her? Was she a serving girl in Vermeer's household? His daughter? A professional model? We are unlikely to ever know.

I think it fair to say that Girl with a Pearl Earring is the perfect symbol of the Dutch Golden Age. During this burst of creative energy spanning the seventeenth century, the people of the Netherlands beat back the armies of the Spanish Empire and Louis XIV of France, while creating the first recognizably modern, free market society in the Western world. These political and economic deeds were complemented by a remarkable degree of religious tolerance, major scientific innovations and soaring achievements in the visual arts.

Examples of the rich artistic heritage of the Dutch Golden Age are on view in the second gallery of the Vermeer, Rembrandt, and Hals exhibit - provided you can tear your gaze away from Girl with a Pearl Earring.

The selection of works from the Mauritshuis testifies to the diversity of Dutch art during the seventeenth century. The incredible range of genres and of technical virtuosity produced in such a small nation is sometimes hard to fathom.

Consider the paired portraits by Frans Hals of husband and wife, Jacob Olycan and Aletta Hanemans. With her plump, flushed cheeks offset by the neck ruff and headpiece which were the height of fashion in 1625. Aletta Hanemans conforms to the stereotype of female beauty of the Dutch Golden Age. 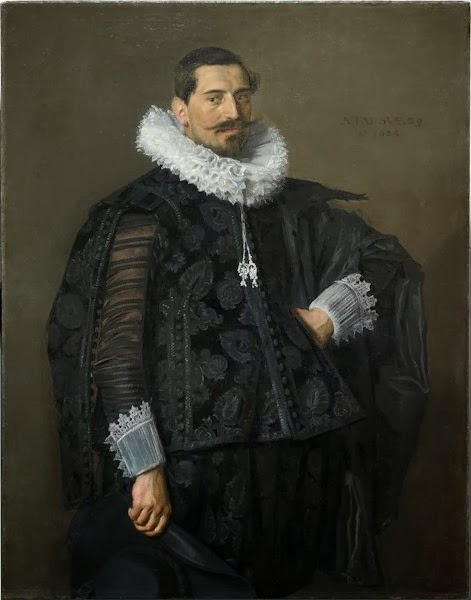 Hals' portrait of Jacob Olycan, presents an altogether different image. Olycan's dark piercing eyes and sallow skin are the features that we associate with the Spanish enemies of the Dutch during this period. Yet Olycan was a brewer from Haarlem and an officer in the St. George Militia Company. Hals painted Olycan in a group portrait of the St. George Militia officers at a banquet in 1627. A more Dutch scene could hardly be imagined.

Vincent van Gogh praised Hals, commenting that he painted with twenty-seven different shades of black. Where did this Spanish-style obsession with black originate? Frans Hals (1582-1666) was born in Flanders, present-day Belgium, which remained under Spanish control after the Dutch revolted, led by the indomitable William of Orange in 1568. But Hals' parents fled from Antwerp to escape the Spanish in 1585 when he was a young child. Any Spanish influence upon his painting, therefore, could only have been indirect and marginal.

Hals was one of the greatest portrait painters in the history of art. He needs no chain of influences to explain his grasp of color and form, his "rough style" or his insight into human character.

Artists of the Netherlands during seventeenth century, however, did possess unrivaled access to the material culture of the entire globe. Thanks to the intrepid - and aggressive - outreach of Dutch maritime trade, all manner of things - Chinese porcelain, lacquerware from Japan, art prints from Italy - were easily attainable to Dutch artists. So vast was the Dutch control of world trade that the English, who had fought as allies against Spain, were infuriated at being locked-out of colonial trade zones and European markets. Warfare broke out between England and the Dutch Republic, with a heavy loss of ships and lives. Samuel Pepys, in his famous diary, records the exasperated comment of a fellow advisor to King Charles II, "By God, says he, I think the Devil shits Dutchmen."

The Dutch themselves were apprehensive about the effect of the unprecedented wealth flowing into their nation during the 1600's. This was particularly true during the first half of the seventeenth century when the strict commandments of Calvinist religious doctrine still dominated Dutch society. 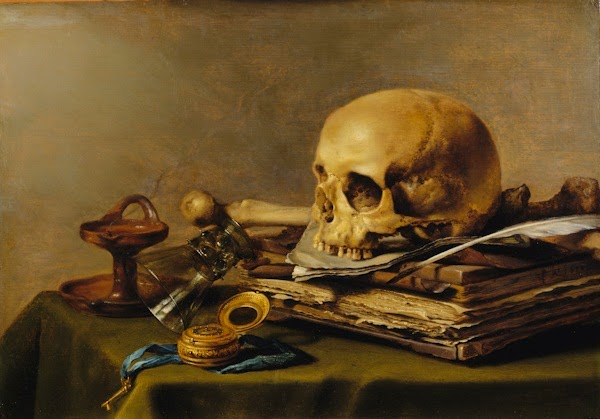 Pieter Claesz, Vanitas Still Life.
Pieter Claesz was a German-born artist who settled in the city of Haarlem. Claesz specialized in still-life paintings. His Vanitas Still Life from 1630 reinforced the Sunday preaching of Calvinist ministers that life is short and worldly pursuits are ultimately in vain. The toppled wine glass, the dying flame of the oil lamp and the cracked, pitted skull are obvious reminders of such sermons.

Perhaps the most notable feature of this superbly crafted work is the way that Claesz treated the pages of the large folio. These are so jagged and brittle that they would crumble at the merest touch. With this master stroke, Claesz affirms that even knowledge and scholarship, major concerns for the scientific Dutch, will pass away.

Rembrandt's "Tronie" of a Man with a Feathered Beret was painted in 1635, during a decade of bravura portraits and major biblical scenes. The term "tronie" is derived from the Dutch word for "face." Tronies were smaller works, character studies or depictions of people in exotic garb. Rembrandt, flush with funds from his portraits, invested in all manner of hats, clothing and gear which he could use as props in his paintings. The fantastical hat and gleaming armor in this tronie were no doubt part of his collection, later auctioned-off after his bankruptcy in 1656. 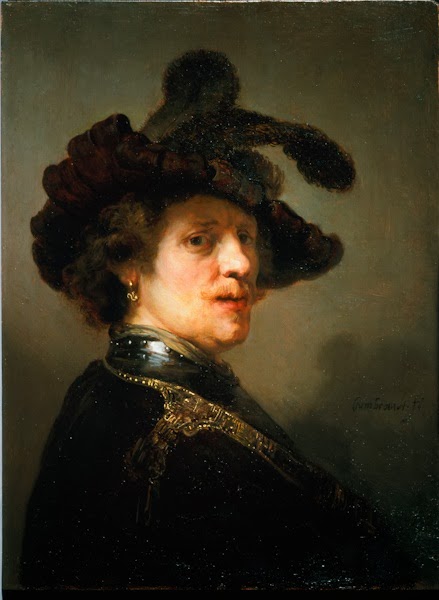 Rembrandt, "Tronie" of a Man with a Feathered Beret

A close look at Rembrandt's "Tronie" reveals that it is a cautionary work like Vanitas Still Life by Claesz. The dashing beret, worthy of one of Hals' cavaliers, strikes a hollow note when we examine the puffy features and creased brow of Rembrandt's protagonist. Is he the recipient of bad news? Has he caught a glimpse of himself in the mirror and realized his own mortality? Whatever the case, there is real fear in the eyes that flash at us from the picture. Here we can begin to see the origins of the introspection and self-knowing that were to transform Rembrandt's later portraits and self-portraits into the most insightful evocations of human character ever painted.

The fleeting nature of life is further attested to by another astonishing painting on view at the Frick, The Goldfinch by Carel Fabritius. This wondrous painting is a trompe l’oeil masterpiece. Fabritius delicately balances brilliant handling of the feathery plumage of the goldfinch against an equally expert depiction of the wall plaster. Is that a real bird posed on a sunlit wall or is it a "trick of the eye" that we are looking at? 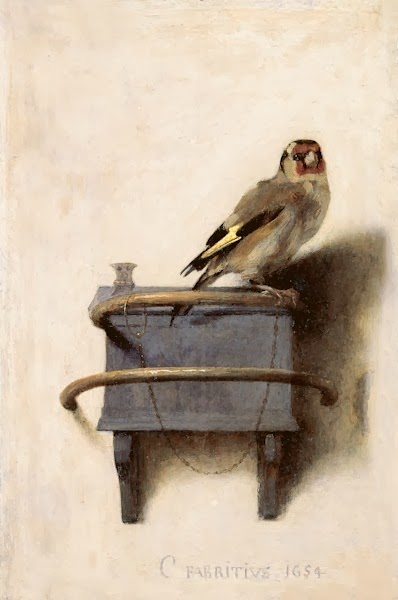 Tragically, Fabritius, Rembrandt's most brilliant pupil, was killed the same year as this amazing work of art was created. On October 12, 1654, a gunpowder factory in the city of Delft, where both Fabritius and Vermeer lived, exploded. Hundreds of people perished, including Fabritius. His studio was burned and much of his work was consumed in the flames.

A year later, another talented pupil of Rembrandt, Nicolaes Maes, painted The Old Lacemaker. It is a sentimental genre work, but also one liberated from allegorical or didactic content. 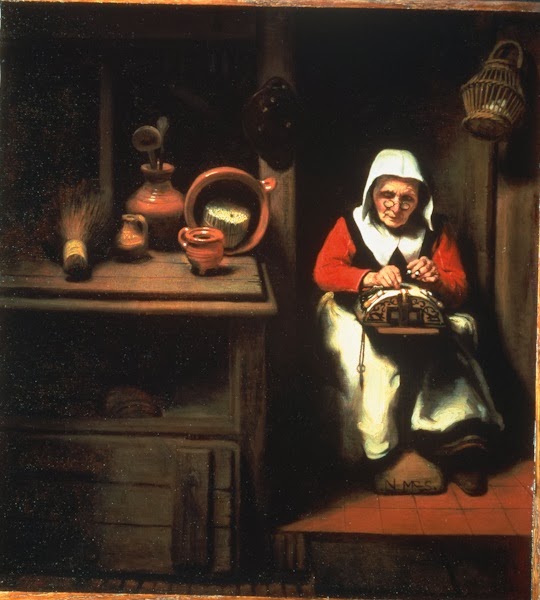 In the last decades of the seventeenth century, Dutch taste favored comforting images of hearth and home. The long years of constant warfare led to a reaction against grand visions of life or preachy moralizing. It was, perhaps, the beginning of the end of the Dutch Golden Age. But Maes' The Old Lacemaker also testifies to the patient, industrious and quietly courageous character of the Dutch people who had made the Golden Age possible in the first place.

Of course, we want to see Vermeer's Girl with a Pearl Earring more than a picture of an old lady making lace. But if there is one lesson to be learned from these masterpieces from the Mauritshuis, it is that beauty can be found almost everywhere we look. Living as they do, in a small corner of Europe hemmed in by the North Sea, the Dutch have nurtured this faculty for appreciating the world around them to a remarkable degree.

And so, when the Girl with a Pearl Earring turns her gaze upon us at the Frick Collection, we are transfixed by that gleam in her eyes. It conveys a visible, lively sense of humor and humanity, pouring out from the soul of Girl with a Pearl. It beams from her eyes, turning the space beyond the picture plain into a place of wonder.

It is the look that defined the Dutch Golden Age - and perhaps ours as well.