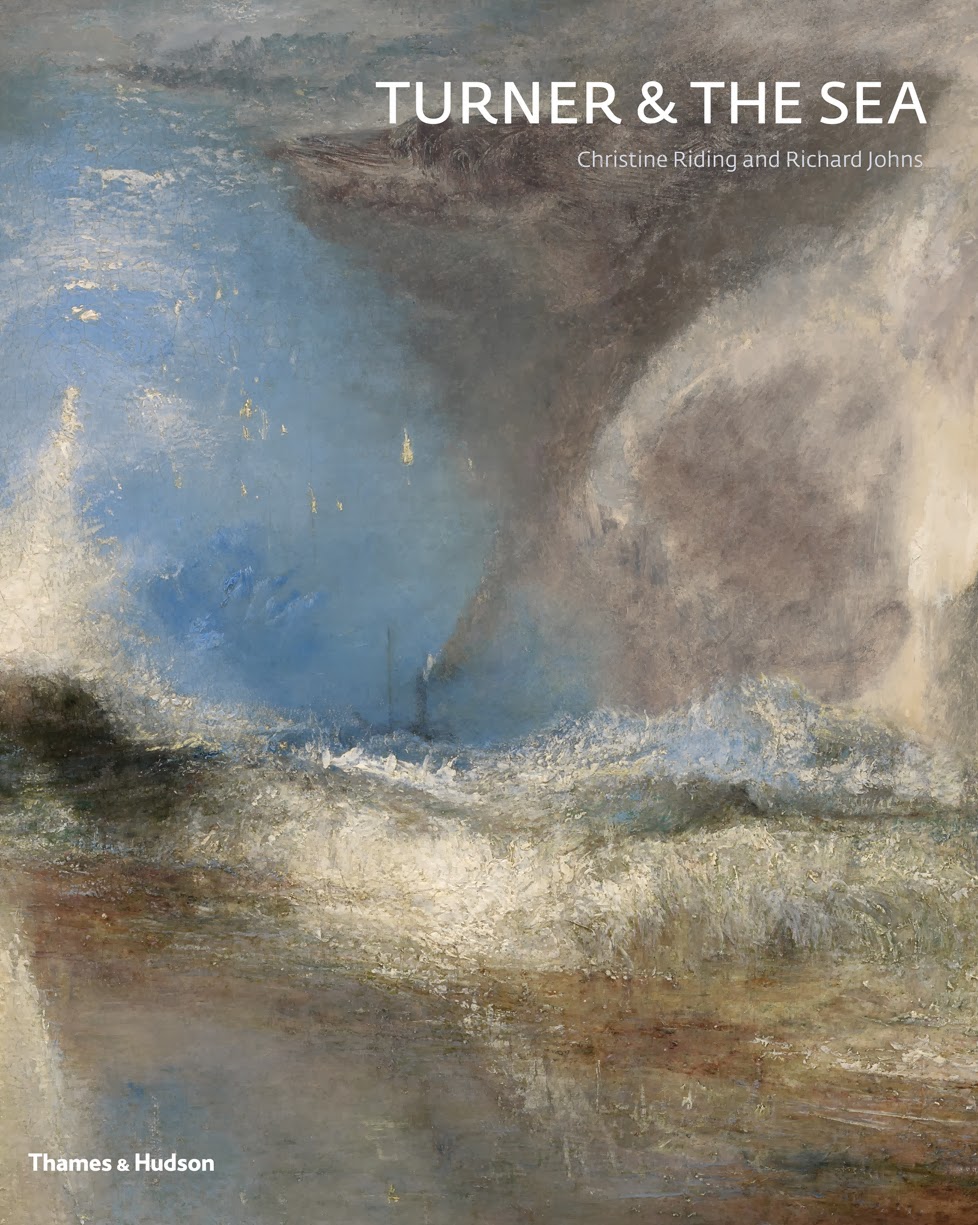 Turner and the Sea
By Christine Riding and Richard Johns
Thames & Hudson/288 pages/$60.00

On first thought, it seems incredible that Turner and the Sea, the exhibition at the National Maritime Museum in Greenwich, England, is the first time that J.M.W. Turner's "marine" paintings have been presented in a full scale exhibit on this specific theme. Yet, this is indeed the case.

Turner and the Sea will be traveling to the Peabody Essex Museum in Salem, Massachusetts, later this year. That is remarkable as well, since exhibitions of Turner's paintings in the U.S. were rare events until quite recently. Many art histories aimed at general readers in the U.S. did not mention Turner at all. With the primacy of Dutch Golden Age art and French Impressionism in American museums, Britain's greatest landscape - and seascape - painter had a comparatively low profile in the United States.

The companion book to Turner and the Sea, published by Thames & Hudson, provides intriguing insights into the evolution of Turner's reputation. One of the book's essays, "Imagining the Sea" by Richard Johns, brilliantly traces Turner's influence on subsequent artists. Another essay makes a convincing case that Turner was a particular role model for American painters of the sea like Winslow Homer and Thomas Moran.

The turning point for appreciating Turner came in 1966 with a landmark exhibit at the Museum of Modern Art in New York City. Turner: Imagination and Reality was curated by the noted painter and historian, Lawrence Gowing. The MOMA exhibit contended that Turner's visionary late work was a harbinger of Modernism. Whether Turner's "pictures of nothing and very like" - in William Hazlitt's memorable words - laid the foundation for abstract art is still a controversial issue. But after the MOMA exhibit, Turner was once more a force to be reckoned with.

Turner certainly demanded respect and attention during his lifetime. His prodigious talent and energy, combined with what John Constable called "a wonderful range of mind," produced a body of work that almost defies comprehension. It has taken decades of patient investigation to fully grasp the extent Turner's legacy - thousands of sketches, water colors and prints and over 300 oil paintings. Turner and the Sea is but the latest in this ongoing effort to form a proper estimation of "the great lion" of nineteenth century art.

J.M.W. Turner (1775-1851) was the son of a Covent Garden barber and wig-maker whose customers included many of the great actors of the British stage. Turner was drawn to the nearby docks along the Thames River and it was there that his fascination for the sea and ships began.

Respect for the working lives of mariners infuses Turner's work. An especially evocative example is Sun-rise, Whiting Fishing at Margate, painted in 1822. The scene depicts the competitiveness and camaraderie of the sea as fishermen in two different boats boastfully hold up the "catch" of the day. 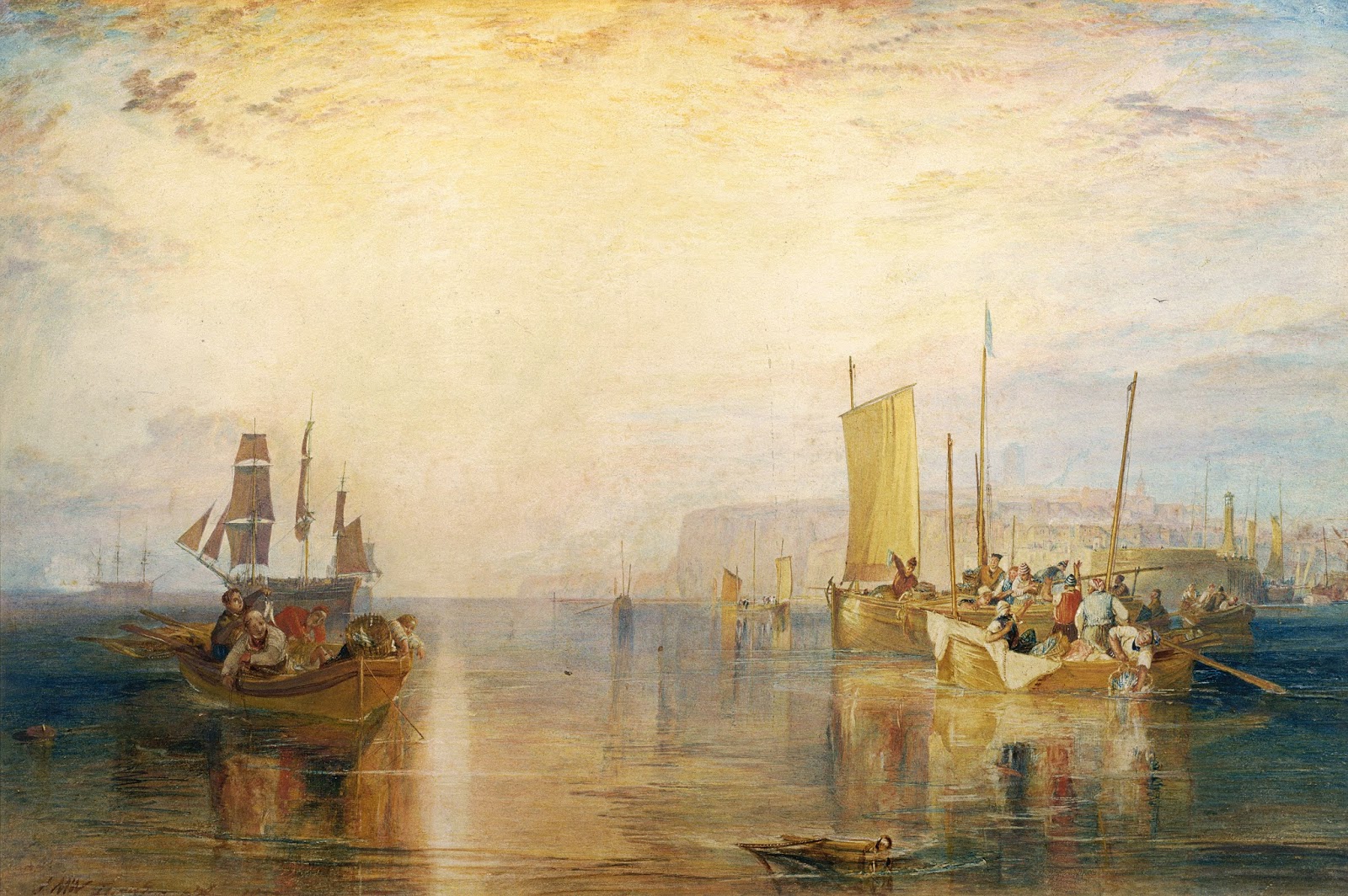 It was a love of the sea that Turner shared with is fellow countrymen, a nautical romance embodied by the tremendous popularity in Britain of Dutch maritime paintings. Turner and the Sea, the book and the exhibit, is revelatory on the influence of Dutch painters like Willem van de Velde (1633-1707) and Jacob van Ruisdael (1628-1682).

Turner's first great oil paintings were maritime scenes in the Dutch style, Fishermen at Sea (1796) and Dutch Boats in a Gale (1801). Turner was a master of water color and this ability soon made its mark on his artistic practice. His facility with water color enabled Turner to paint at speed, capturing the fleeting moods of the weather. In time, atmospheric effects like luminous skies and billowing cloud formations became the real subject matter of Turner's paintings, rather than the historical themes which gave his paintings their titles.

Turner's breakthrough work in this respect was a landscape, Snow Storm: Hannibal and his Army Crossing the Alps. It was painted in 1812, around the same time that Napoleon's army was overwhelmed by the Russian winter during the retreat from Moscow. Turner's Snow Storm presents a similar spectacle, with Hannibal's stricken soldiers cringing under the iron lash of Nature.

If human beings are vulnerable to harsh weather conditions on land, then danger is far greater at sea. Turner had already painted two apocalyptic scenes of maritime destruction, The Shipwreck in 1805 and The Wreck of a Transport Ship in 1810.

A growing sense of the futility of human endeavor pervades these disturbing pictures. In the first, rowboats are picking survivors out of the heaving gray seas and there is a sense that some of the crew will make it to land. In The Wreck of a Transport Ship, which I saw some years ago in a special exhibition at the Metropolitan Museum, the stricken vessel is about to plunge to the bottom while the escaping life boats and a rescuing schooner are being engulfed by wind and wave.

"No ship or boat could live in such a sea," a British admiral is quoted as saying, after he saw The Wreck of a Transport Ship.

If a growing pessimism about human existence can be detected in these shipwreck paintings, the real surprise comes in a work that should have been an unequivocal celebration of British victory. This was Turner's oil painting from the early 1820's, The Battle of Trafalgar, 21 October 1805.

Turner received a Royal commission to paint the decisive British naval victory of Trafalgar. The vast canvas - the biggest that Turner ever created - was destined to hang in the palace of St. James. But when King George IV donated the painting to the National Gallery of Naval Art at Greenwich, the legend arose that the British government was not pleased with the picture. This adverse speculation was made plausible by the fact that Turner never received a knighthood from the Crown while lesser artistic talents were so honored.

In their essays, art historians Christine Riding and Cicely Robinson demolish the myth that George IV looked unfavorably upon Turner's Trafalgar. But Turner's painting is a disturbing view of warfare and it is easy to believe John Ruskin's account that "old salts" from the Royal Navy expressed their displeasure about Turner's version of the great battle. 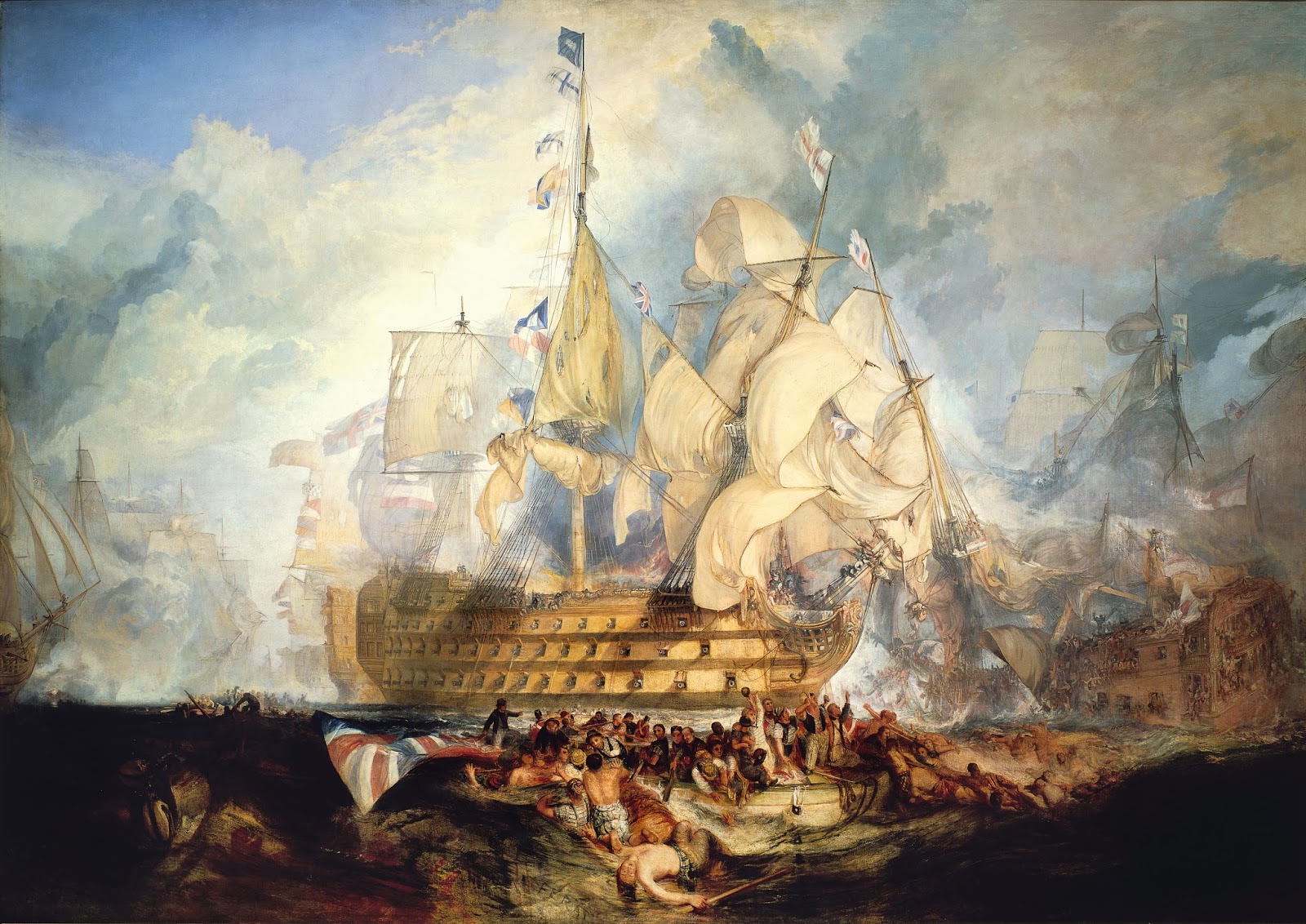 Turner's Battle of Trafalgar was commissioned to hang with another scene of maritime combat, a depiction of the naval engagement in 1794 known as the "Glorious First of June." Both paintings show British seamen rescuing French sailors in the foreground while warships batter each other with artillery broadsides. The contrast between the two works is one of spirit, an unresolvable difference in the way that warfare is memorialized.

The earlier painting, by a French-born artist, Philip de Loutherbourg, presents the Royal Navy sailors in a heroic stance. The mood of Turner's rescue set-piece is totally different. It depicts a mass of struggling, suffering humanity, like the doomed occupants of the life boats in The Wreck of a Transport Ship. It is difficult to distinguish between British and French, victors and vanquished. The frozen look of horror on the face of the dying man at the bottom of the scene places the shocking, sickening reality of war directly at the eye level of art gallery visitors.

The final defeat of Napoleon in 1815 enabled Turner to travel to the continent of Europe. The effect of painting in the sun-drenched climate of Italy liberated Turner's palette. Light became Turner's defining subject. A famous cartoon showed him wielding a mop in place of a paint brush, dipped in a bucket of yellow paint. It was an exaggeration of course - but not without a touch of truth.

As golden hues flooded onto the picture plane of a "late-Turner," narrative content was largely banished. In the case of his seascapes, Turner explored the diffusion of light though veils of mist and fog. The struggle is no longer between human beings and nature. Rather it is the conflict of creative energy against the death grip of oblivion.

Turner's Off the Nore: Wind and Water, painted between 1840-45, is an almost completely abstract work. Except for the smudge of white representing a sailboat, there is little that represents figurative details or narrative content. Take away the ethereal, ghostly shape at the center of the painting, and Off the Nore dissolves into a series of horizontal sweeps of color. If we didn't know better, we might assume that it is signature work by Mark Rothko. 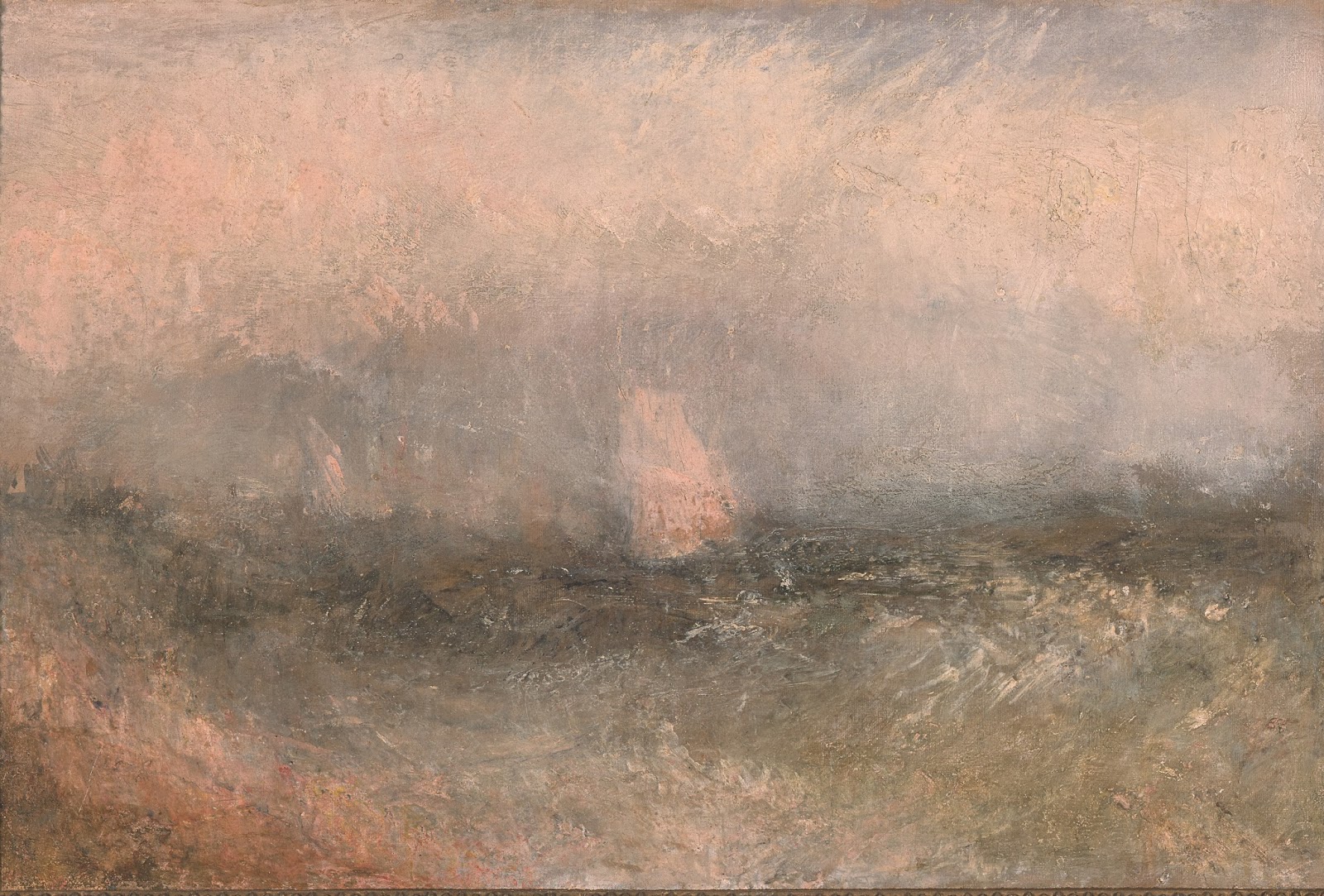 That comparison was made by Rothko himself when he visited the Museum of Modern Art exhibit in 1966. "This man Turner," Rothko exclaimed with studied irony, "he learnt a lot from me."

Rothko was actually so moved by Turner's paintings that he donated nine of his Seagram murals to the Tate Gallery in London where the vast body of Turner's work is maintained and exhibited.

Rothko's response is a key to understanding the mystery of Turner's work. This is especially so for the maritime art so brilliantly presented in this exhibition and in the Thames & Hudson companion book with its superb essays and the exceptional quality of the color reproductions of Turner's paintings.

Whether all or some of Turner's nearly abstract works were intended as studies or as drafts of paintings to be finished later, is really beside the point. Turner realized that man's relationship with nature and the sea is a state of constant flux. It is a voyage that will result either in shipwreck or in another voyage. There is no point of final destination. Later painters from Richard Parkes Bonington in the 1820's to Rothko in the 1960's sailed through seas that Turner had earlier explored.

Turner labored throughout much of his life, writing a gloomy, soul searching poem entitled "The Fallacies of Hope." Occasionally, he placed excerpts of his verses on the frames of disaster-themed paintings like Snow Storm: Hannibal and his Army Crossing the Alps. But Turner’s vision of life was not entirely despairing. As we can see in Turner and the Sea, he was also motivated by the undeniable fact that ships and the creative spirit of humanity are not intended to remain at anchor, safely in port.

Posted by Art Eyewitness at 5:07 PM