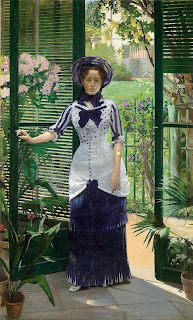 Art Eyewitness Looks at the Art Scene in 2013

It was inevitable that the art world in 2013 should look back a century to 1913.

The last year before peace and "the idea of progress" died in the trenches of World War I was marked by landmark cultural events. The riotous opening night in Paris of the ballet Rite of Spring, the founding of the Omega Workshops by Roger Fry, the publication of the first volume of Marcel Proust's Remembrance of Things Past and the introduction of modern art to the United States at the Armory Show all took place in 1913. 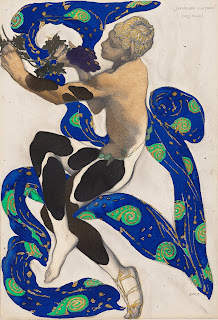 Léon Bakst, Ballets Russes Costume design for The Afternoon of a Faun

Two of these 1913 events were celebrated by major exhibitions. The National Gallery in Washington D.C. remembered Rite of Spring with Diaghilev and the Ballets Russes, 1909–1929: When Art Danced with Music. The New York Historical Society mounted The Armory Show at 100, commemorating the moment when New York City and avant-garde art in the United States became virtually synonymous.

The turn of the year is the "Janus" moment in many spheres of life, but in the arts this is especially true. It's time to take stock of creative achievements, memorable exhibitions and notable events in the arts over the past year. It is time to look forward, too.

No event relating to the arts in 2013 is of more concern than the announcement that appraisers from Christies have surveyed the collection of the Detroit Institute of Art (DIA) for the possible sale of art works purchased with municipal funds. The bankruptcy of the city of Detroit is, of course, no small matter. Saving essential city services for the people of Detroit is the immediate concern. But as a revenue generating initiative, it is difficult to conceive a more misguided plan than auctioning a community's cultural heritage. To borrow a remark by Talleyrand, it is "worse than a crime, it's a mistake." 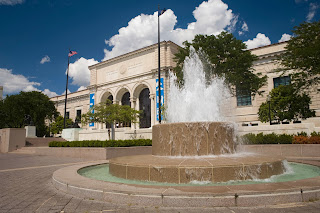 The Detroit Institute of Art

Plan B for the DIA is a proposal by Chief US District Judge Gerald Rosen to create a private trust, based on funds from private foundations, which would buy the entire museum and its collection. This may seem like a better idea than selling masterpieces - at first glance.

Private charities can achieve great things for the arts - and regularly do. But it needs to be remembered that when private organizations and foundations combined with the art institutions of Philadelphia to save Thomas Eakins' The Gross Clinic from being sold to a Walmart-funded museum in Arkansas, there were hidden costs. Several major paintings from the collections of the Philadelphia Museum of Art and the Pennsylvania Academy of the Fine Arts had to be sold to raise funds to pay the tab for The Gross Clinic.

What is to prevent a privately-run Detroit Institute of Art from selling a Rembrandt or Matisse whenever it feels the need to replenish its coffers?

Municipal art museums don't need to sell gems from their collections. They generate significant amounts of revenue each year and special exhibits are noteworthy in this respect. The Metropolitan Museum of Art in New York mounted a spectacular exhibit in 2013, Impressionism, Fashion, and Modernity, which later moved to the Art Institute of Chicago. Like Diaghilev and the Ballets Russes, the Impressionism exhibition brilliantly integrated period clothing of all types, female and male, to show how the world of fashion influenced the realm of the visual arts during the late 1800's. 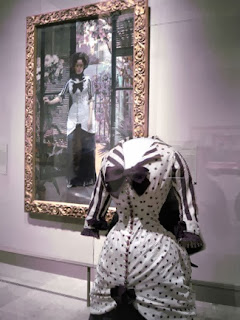 Gallery view at the Impressionism, Fashion and Modernity exhibit

What has this to do with the plight of the city of Detroit and the DIA? Impressionism, Fashion, and Modernity at the Metropolitan Museum, along with two other popular exhibits, produced astonishing profit figures for the city of New York. According to a press release from the Metropolitan, the Impressionism show, with Punk: Chaos to Couture and The Roof Garden Commission: Imran Qureshi, "generated an estimated $742 million in spending by regional, national, and international tourists to New York."

I blinked twice at these numbers myself, but the Met's press release backed-up its claim with detailed statistics that included tie-in revenue from expenditures by museum visitors on hotels, restaurants and theater: "The full-year estimate of visitor spending in New York by out-of-town visitors to the Museum in fiscal year 2013 is $5.4 billion."

Detroit cannot match New York's theater district or other tourist attractions. But the cultural life of cities is a major indicator of their economic viability. Detroit, "Motown," is not without considerable resources to promote a resurgence - and the DIA is one.

The Detroit Institute of Art has a collection matching that of the Metropolitan Museum in quality of its works of art, if not in number. Along with magnificent paintings by Rembrandt and van Gogh, the DIA has major works by artists rarely seen in U.S. collections. Martha and Mary Magdalene by Caravaggio, The Peasant Dance by Breugal and Interior with a Lady by Vilhem Hammershoi are just a few of the DIA's A List masterpieces.

Surely works of this magnitude could anchor traveling exhibits to help raise revenue and insure that the DIA remains a municipal art museum with its collection intact and future assured.

Selling these treasures, on the other hand, is the cultural equivalent of eating bread made with seed corn needed for next year’s crop.

Traveling exhibits are not just a good idea. They are an affirmation of a community’s belief in itself and an appeal to the wider world to share in the cultural riches it has to offer. 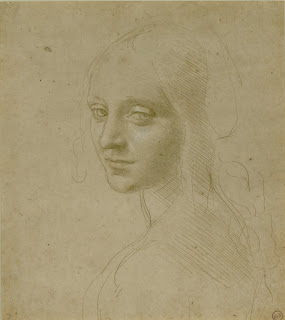 Italy, not exactly flush with cash at the moment, declared 2013 the Year of Italian Culture in the United States. A wide range of cultural and artistic programs are being mounted throughout the U.S., notably the exhibition of rare drawings by Leonardo da Vinci and his followers at the Morgan Library in New York City. The works on display, from the Biblioteca Reale in Turin, include the exquisite Head of a Young Woman which served as the model for Leonardo’s painting, Virgin of the Rocks.

Greece, in even worse economic shape, sent Heaven and Earth: Art of Byzantium from Greek Collections, first to the National Gallery in Washington, where its opening was delayed by the budget brinkmanship in Congress during October. After Heaven and Earth completes its run at the National Gallery on March 2, 2014, it will travel to the J. Paul Getty Museum, Los Angeles.

American museums – with the help of enlightened donors – are equally capable of promoting the welfare of their communities.

A good example was provided by the Pennsylvania Academy of the Fine Arts. PAFA has a splendid collection of 9,500 works on paper - drawings, sketchbooks, watercolors and prints. PAFA's Victorian era museum in downtown Philadelphia, designed by Frank Furness, is largely illuminated by natural light from its many skylights. It's a wonderful setting to see great oil paintings by Winslow Homer or Thomas Eakins. Natural light, however, is the worst possible environment for displaying water colors, which are subject to fading, and this is one reason why this artistic medium is so little appreciated. 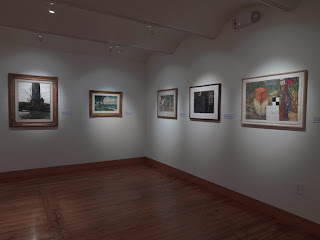 The Richard C. von Hess Gallery at PAFA
In October, PAFA opened the Richard C. von Hess Foundation Works on Paper Gallery in the Furness building specifically to exhibit light-sensitive works of art. Several interior rooms, formerly office space in the museum, were converted to create the gallery. A special study room for research scholars is part of this museum space.

The effect of examining art in this sanctuary-like setting is stunning. The first exhibition in the von Hess Gallery, Hidden Treasures Unveiled, displayed water colors from Benjamin West in the eighteenth century to modern and contemporary artists. Most of the names are familiar, but the effect of studying these water colors in the carefully-controlled lighting conditions of the von Hess Gallery is like seeing a great artist's work for the first time.

2013 marked the seventy-fifth anniversary of another museum "display-space." Opened to the public in 1938, The Cloisters is the Metropolitan Museum's special collection of medieval art. The Cloisters is located on a 56 acre park at the northern tip of Manhattan, donated by John J. Rockefeller, Jr. These works are housed in a facility that incorporates structural elements from buildings from the Middle Ages like the Cuxa Cloister. 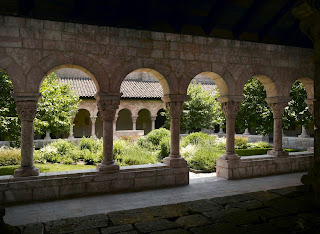 The Cuxa Cloister at The Cloisters, Metropolitan Museum of Art

To preserve the wooded skyline on the opposite bank of the Hudson, John J. Rockefeller Jr. bought and donated 700 acres of the New Jersey Palisades, setting them out of reach of real estate developers.

The result of such far-sighted planning created one of the few places where religious art does not sacrifice its original purpose and meaning by being displayed in a civic structure. The Cloisters may not be consecrated ground like a real church but it does exude a sense of holiness and solemnity like few other museums in the world.

If you think - as I once did - that a major achievement like building The Cloisters could never be repeated, visit the Metropolitan Museum's galleries devoted to Art of the Arab Lands, Turkey, Iran, Central Asia, and Later South Asia. An eight-year renovation project, completed in 2011, transformed these galleries into an inspirational setting for contemplating works of art from the Islamic world - or just for contemplation and meditation, exactly as one can do at The Cloisters. 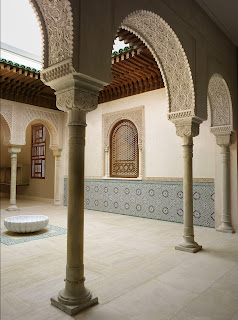 Moroccan Court at the Metropolitan Museum of Art

This past spring and summer, the Met presented a thoughtful exhibition, Making the Invisible Visible: Conservation and Islamic Art, which detailed the methods used to preserve the rare and precious works of art now on display in the new galleries. An additional exhibit, Fifty Years of Collecting Islamic Art which opened in September, celebrates the establishment of a separate department for Islamic art at the Metropolitan Museum in 1963.

Enlightened patronage in the arts was powerfully expressed in the Philadelphia Museum of Art's "Great and Mighty Things" exhibition, held in the spring of 2013. Nearly 200 works of art by self-taught artists were displayed in this remarkable exhibit. The museum's design staff, one of the best in the business, created a sense of interior space for displaying the work of each of these "Outsider" artists. Many of them were poor or physically and emotionally challenged individuals, working in obscurity on themes that often defied categorization or ready explanation. 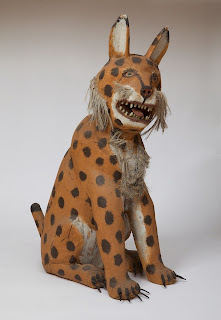 Back in the 1970's and 80's, when most art lovers were fixated on "mega" exhibits of the Impressionists, Jill and Sheldon Bonovitz began collecting Outsider art. Jill Bonovitz is one of the co-founders of the prestigious Clay Studio in Philadelphia, which helped anchor a revival of the Old City neighborhood of Philadelphia, a once blighted area not far from the historic sites in the city.

The Bonovitz collection, which includes work by the now-legendary Bill Traylor, has been promised to the Philadelphia Museum of Art. This is an almost text-book example of how a visionary role for fine art can help restore a city's image and finances - including Detroit's.

The Detroit Institute of Art has a remarkable spiral staircase among the many beautiful architectural details of its building. Reflecting upon it set me to thinking about the unforgettable photograph taken during the Nazi air attacks on London in 1941. Bombed Regency Staircase was taken by Bill Brandt, the German-born lensman who became the greatest British photographer of the twentieth century. The Museum of Modern Art in New York mounted a retrospective of Brandt's works in 2013. 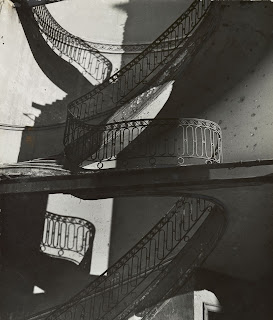 Bombed Regency Staircase demonstrates that the human instinct for beauty can survive, indeed flourish, during a concerted effort to destroy or subvert it. But can this instinct for beauty and the great museums created to safeguard its creations survive the great peril of our times? I speak of the wanton negligence and cultural amnesia that increasingly characterize society's attitude to art, to things of the spirit.

Let us hope that 2014 will provide us with a positive answer to that question.