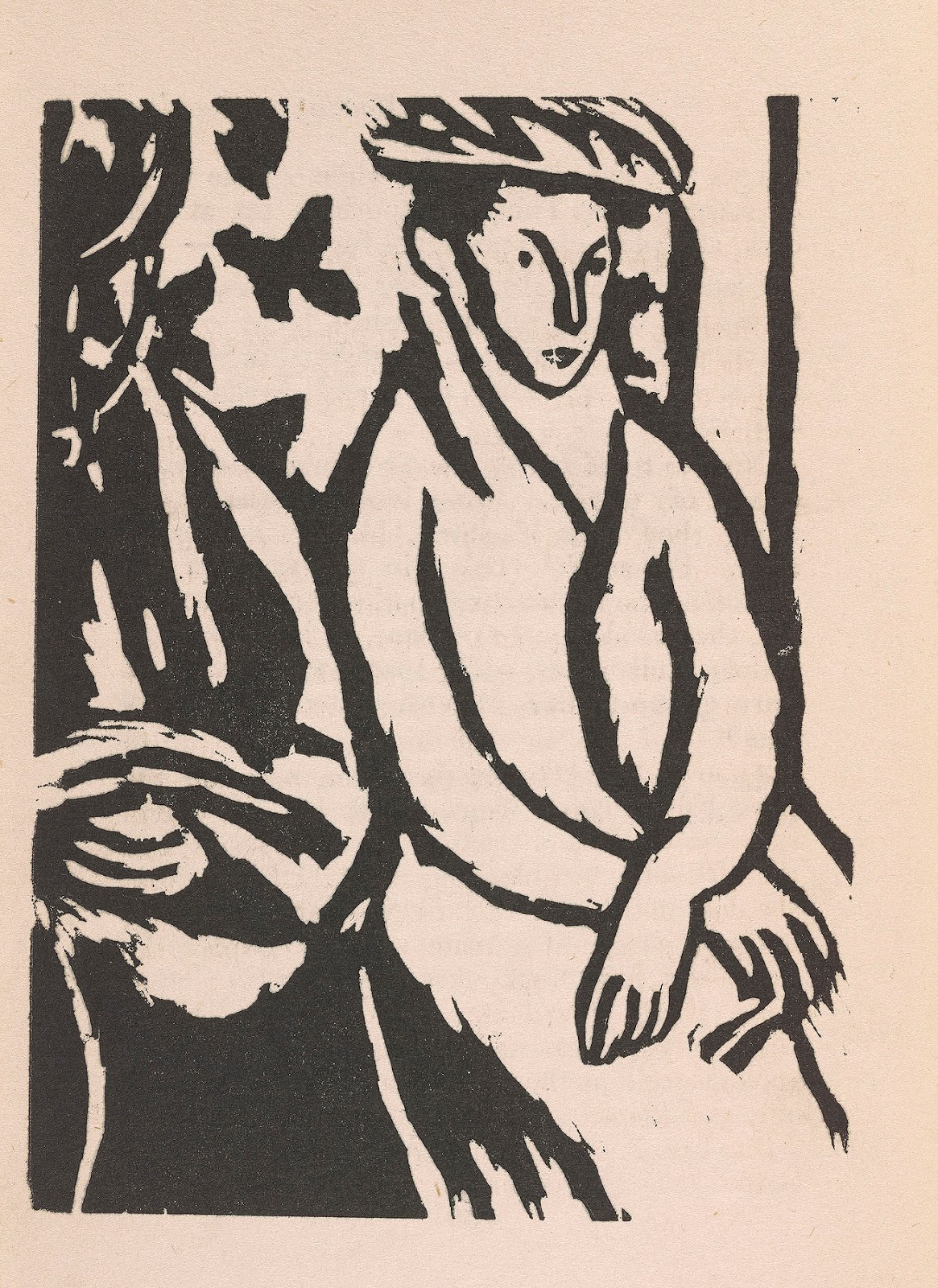 Medium as Muse: Woodcuts and the Modern Book

A picture is no longer worth a thousand words.

We live in a world were a tidal wave of imagery threatens to swamp human consciousness. From Google Images and cell phone photography to the omnipresent screen presence of television, people in the twenty-first century glimpse more pictures in a week than a person in the not too distant past would have seen in a lifetime.

Throughout much of history, images were invested with power and sanctity. That is the true meaning of the word Icon. Now, the digital revolution is threatening the ideal of the uniqueness and spiritual force of images.

A new exhibit at the Morgan Museum and Library shows that similar concerns emerged during the age of the Industrial Revolution. Mechanized printing confronted people with a bewildering, disorienting mass of images. A counter movement arose, based upon the technique of carving pictures on wooden blocks to print illustrations in books or posters. This came to be called the Woodcut Revival.

The Woodcut Revival, as its name suggests, was the second great age of carving pictures and designs that could then be coated with ink to produce multiple copies of an image. The first had taken place during the 1500's when Albrecht Durer used the woodcut technique, originally developed in China nearly a thousand years before, to achieve astonishing levels of artistry. In time, Durer earned much more from the woodcut prints of his pictures than from the sale of individual paintings.

The heyday of the Woodcut Revival took place between 1890 and the outbreak of World War Two. But the artist who sparked this renaissance lived nearly a century before.

This was Thomas Bewick, a copper engraver and woodcutter from Newcastle in the north of England. Bewick (1753-1828) used his metal engraving tool, called a burin, to carve on wood. In doing so, Bewick followed French innovators earlier in the 18th century. These included Jean-Michel Papillon, who produced woodcut images for wallpaper. Bewick turned his attention to book illustrations. His woodcut pictures, which are properly called woodcut engravings, are among the most skillful ever created.

Bewick perfected the technique of cutting against the grain of hard, dense types of wood. This enabled him to create intricate patterns of white and black lines. These "hatchings" made his woodcut illustrations look more like drawings with subtle tones of shading than simple black and white prints. 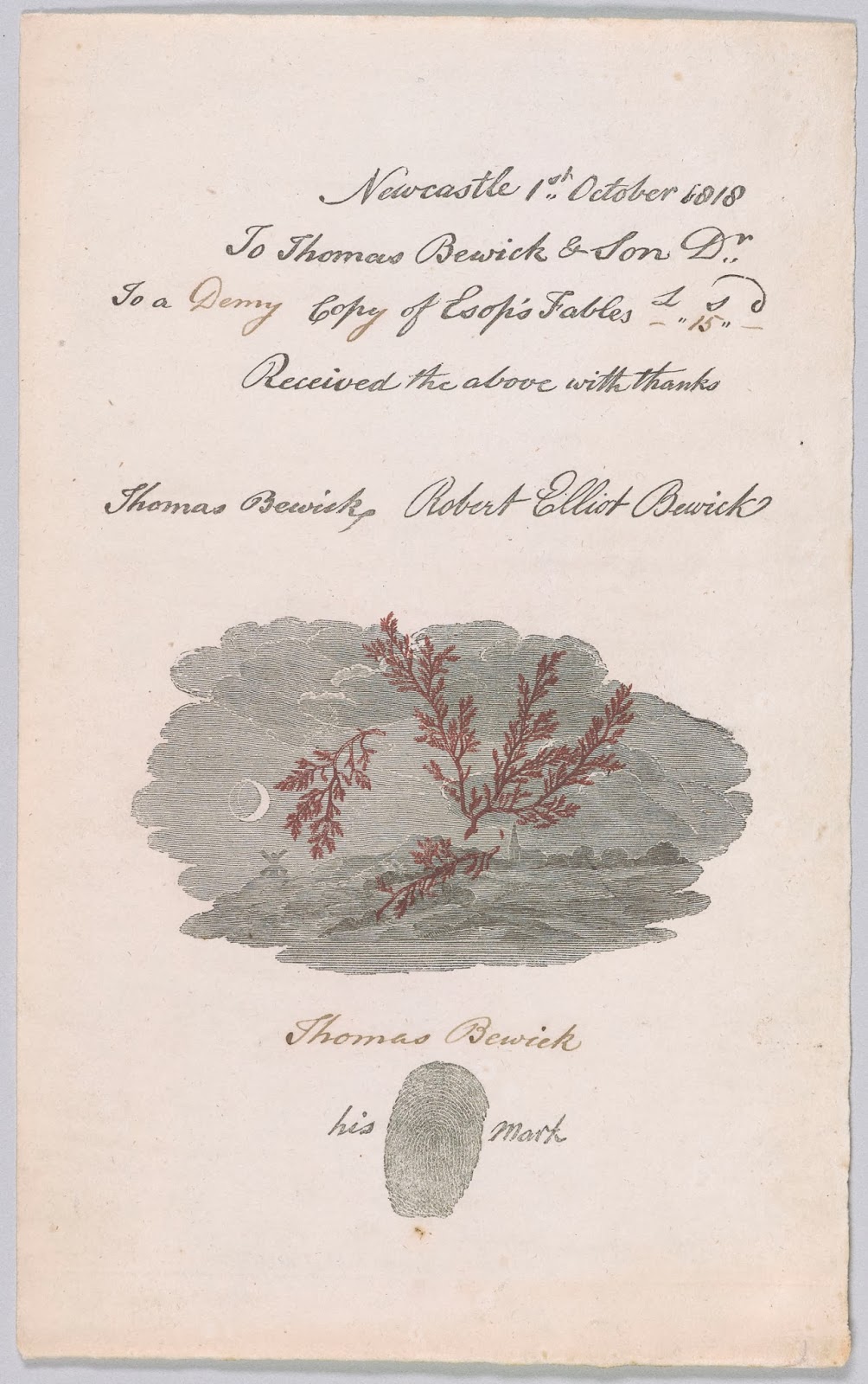 Bewick was so successful with this technique that he began to issue copies of his woodcut-illustrated books with a thumbprint receipt to prove that the work was indisputably his. This example dates from 1818 for an edition of The Fables of Aesop.

William Blake, The Pastorals of Virgil, 1821

By the end of his life, Bewick's method of "against the grain" engraving was emulated by many woodcut illustrators in Britain and Europe. But others, like the visionary poet and artist, William Blake, preferred the earlier style of Durer's era. This "primitive" style of woodcut carving became associated with counter-cultural and left-wing political movements. This is important to note because woodcut illustrations were often featured in expensive, limited-edition books favored by wealthy collectors.

During the nineteenth century, woodcuts appeared in two competing roles: the woodcut as talisman of the art of the common man or as aesthetic masterpiece affordable only in elite circles. Medium as Muse, as the Morgan Library exhibit is called. reveals that these two basic categories of woodcuts covered a very wide variety of illustrations. Over ninety woodcut prints, books illustrated with woodcuts, drawings and tools used to create woodcuts are on display in this much-needed exhibit at the Morgan Library. All are from the Morgan's collection.

Emile Bernard, the artist who mounted the first retrospective of the work of Vincent van Gogh, is a key figure in the duality of the Woodcut Revival. Bernard (1868 -1941) was a great admirer of Japanese woodcuts and of the popular prints made in the city of Épinal in northeast France. Yet he chose to illustrate with woodcuts one of the most controversial and "decadent" literary works of the era, Les fleurs du mal by Charles Baudelaire. 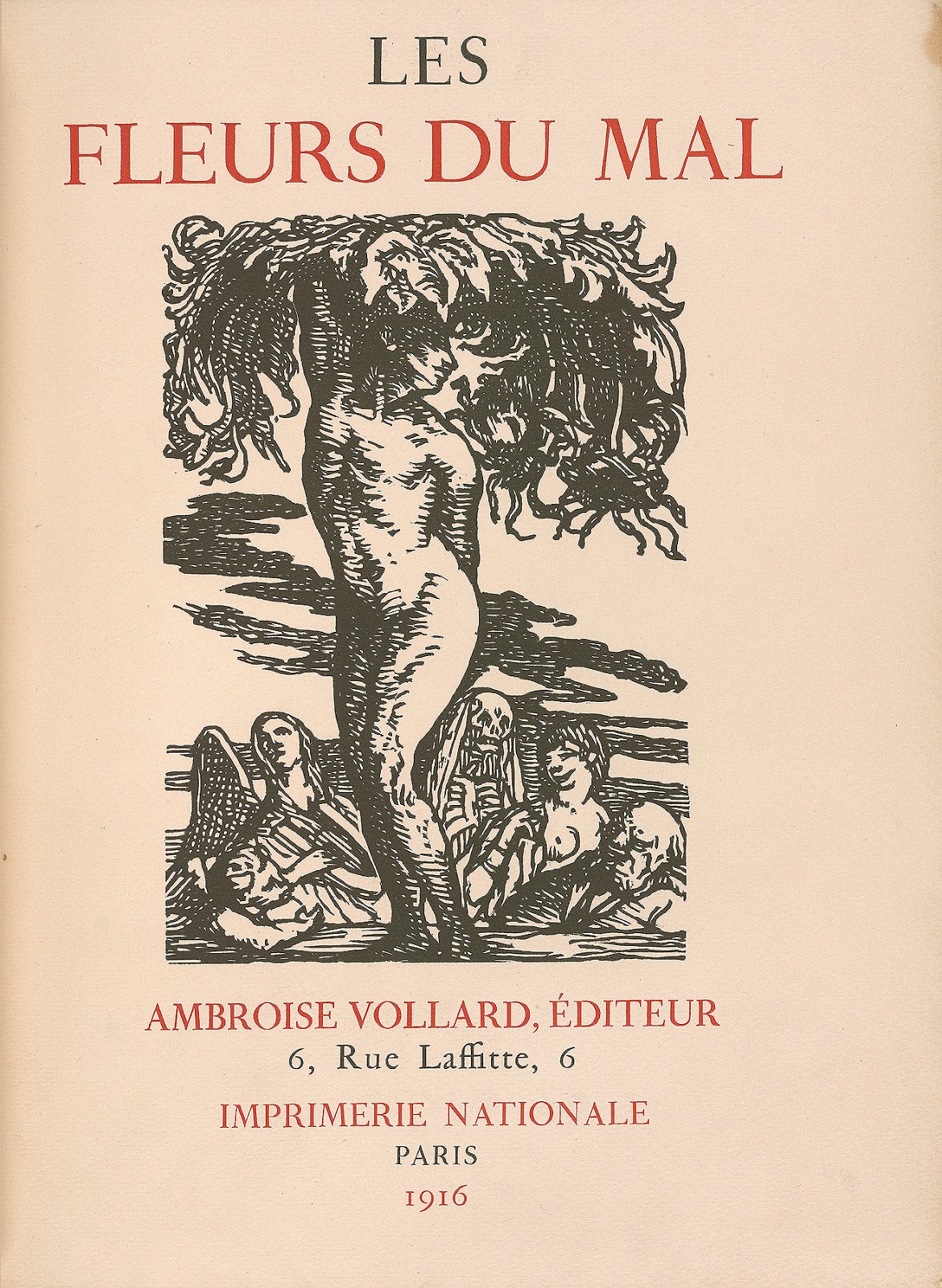 It took another Englishman, William Morris, to launch the Woodcut Revival in earnest. Morris (1834-1896) was one of the leaders of the Arts and Crafts movement. He had the private wealth to underwrite the operations of his design studio, which specialized in wallpaper, textiles and other furnishings for homes and churches. In January 1891, Morris founded the Kelmscott Press to produce limited editions of classic or inspirational works. The production of these books incorporated all the traditional, artisan techniques that Morris struggled to preserve in an age of increasing automation. 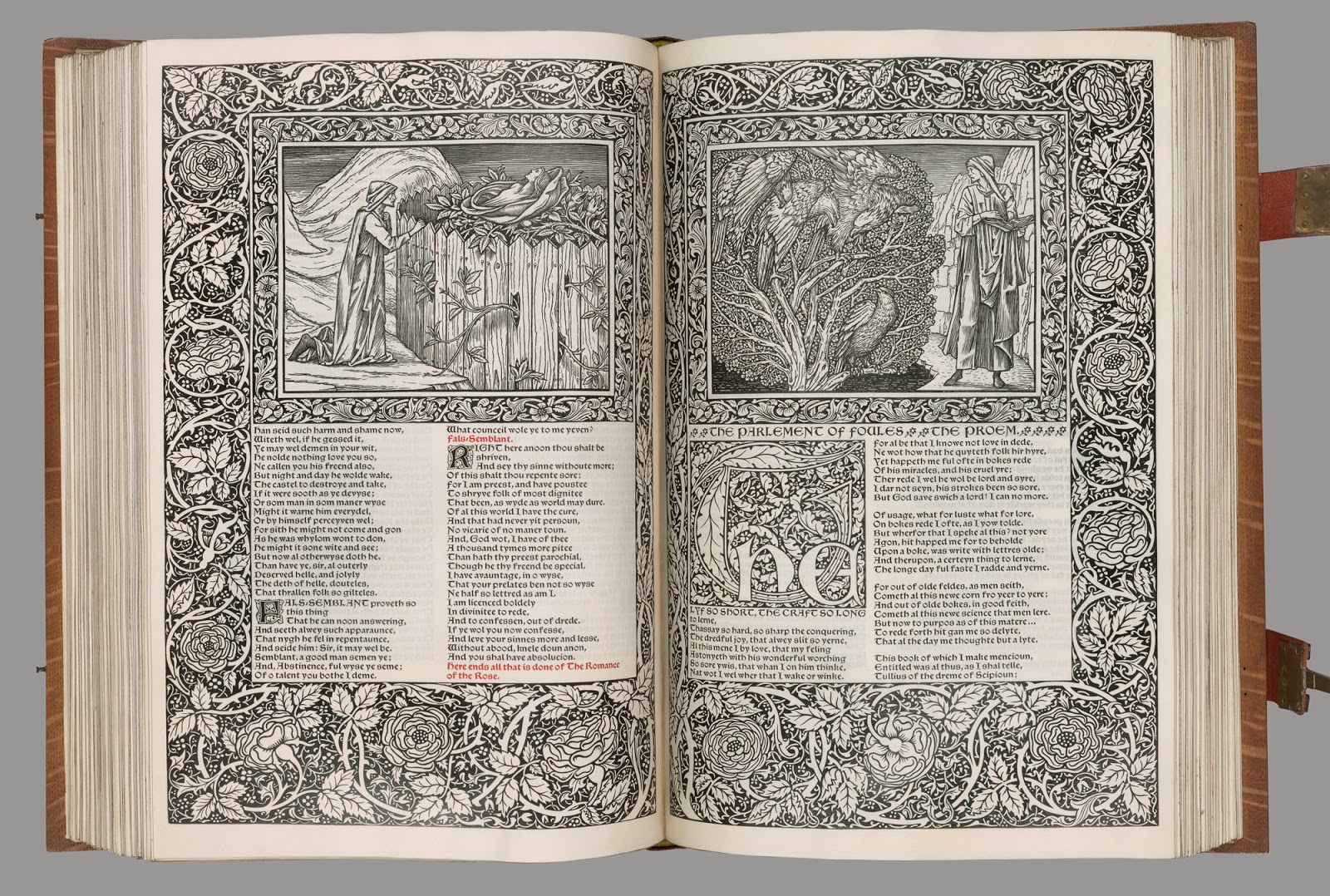 The Works of Geoffrey Chaucer
Designed by William Morris, 1896

Morris and his long-time colleague and friend, Edward Burne-Jones, worked together on a lavishly illustrated edition of the works of Geoffrey Chaucer. Five years of planning, two years to produce, 438 copies in total, the Kelmscott Chaucer was illustrated with eighty-seven woodcuts by Burne-Jones. These are among the last art works in the Pre-Raphaelite tradition. Morris died in October 1896, as his edition of Chaucer came clanking from the hand press. Burne-Jones died less than two years later, in June 1898. It was the end of an era - and the beginning of another.

The Kelmscott Press gained widespread fame for its stunning, handcrafted books. Lucien Pissarro (1863-1944), son of the Impressionist Camille Pissarro and a notable artist himself, established the Eragny Press with the help of his wife, Esther. Pissarro was a great admirer of Japanese prints like his friend, Vincent van Gogh, and he incorporated color woodcut engravings in many of his works. But Pissarro lacked the independent wealth of Morris and he suffered a stroke which limited the number of publishing projects that he could undertake. Never-the-less, the Eragny Press woodcuts made a deep impression on book collectors on the European continent.

The Kelmscott Chaucer and the Eragny Press books were feasts for the eye but not intended for reading. Morris described his edition of Chaucer as "essentially a work of art." But the sheer number of woodcut illustrations in these beautiful books enabled viewers to construct a visual narrative without grappling with the dense, crowded typography. 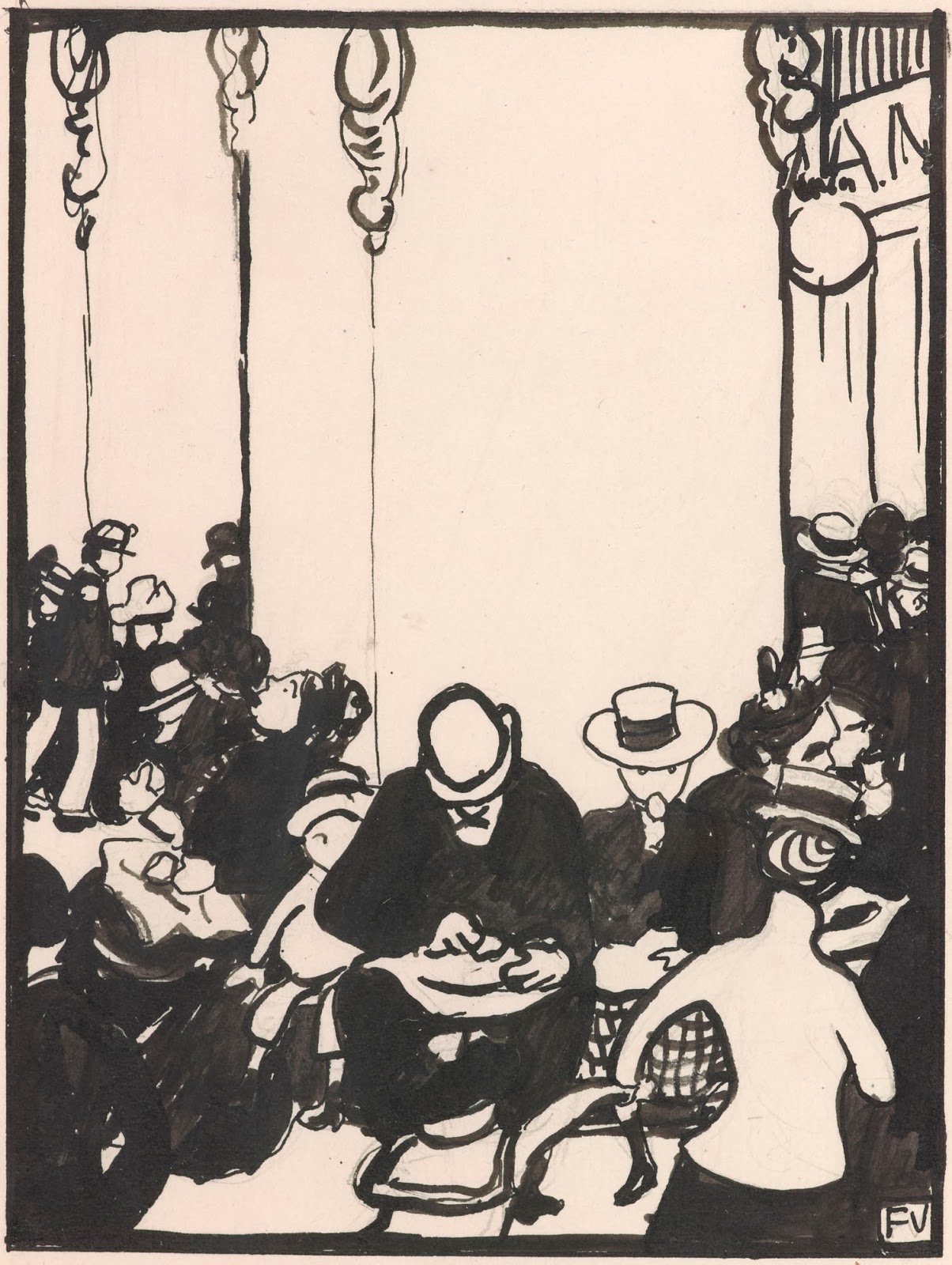 Picking up on this, the Swiss-born artist, Felix Vallotton (1865- 1925), produced several series of woodcuts without accompanying text. These presented episodes or scenes whose meanings were easy to grasp. Vallotton's woodcuts totally dispensed with hatchings and simulated gray tones. His woodcuts were small universes of black and white.

Frans Masereel (1889–1972), born in Belgium but active in France, created "wordless novels" with woodcuts unsupported by text. His masterpiece was Mon livre d'heures or Passionate Journey, the story of a twentieth century everyman first published in 1919. A popular Chinese edition appeared in 1933.

Masereel was a hard-working, prolific artist, a painter as well as woodcut specialist. Only a year after Passionate Journey, he published L'Idée or The Idea. In this symbolical work, a naked woman representing free-thinking ideals, is hunted down by the Capitalist "powers that be." 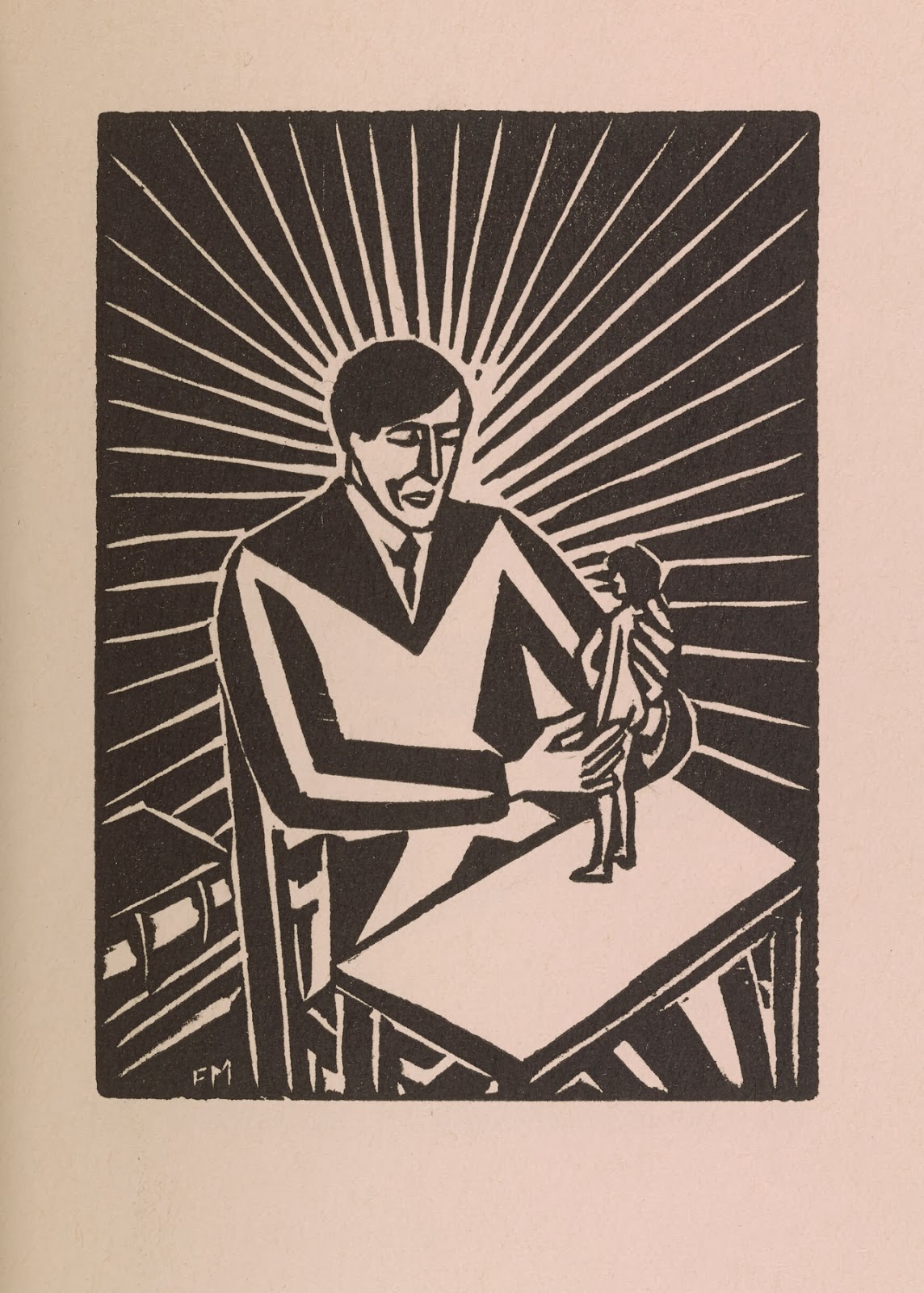 A 1932 animated film, L'Idée, inspired by Masereel's wordless novel, was made by Berthold Bartosch, a Hungarian filmmaker, and can be seen at the Morgan exhibit.

Masereel made a lasting impact with his wordless novels, his influence extending to Art Spiegelman's controversial Holocaust graphic novel, Maus, completed in 1991. But it is inconceivable to consider the role of woodcuts in twentieth century American art without studying the career of Lynd Ward.

Lynd Ward (1905-1985) is represented in the Morgan exhibition by a short film documenting his carving technique. Ward was fortunate that woodcuts enjoyed a vogue in advertising circles during the 1930's and 1940's. He was at the peak of his energy and talent, both of which were epic in scope. Ward produced woodcut engravings for such corporate giants as U.S. Cast Iron Pipe & Foundry. Ward's woodcuts gave a populist appeal to the marketing strategy of a company which produced seventy-percent of the metal pipes in the United States. 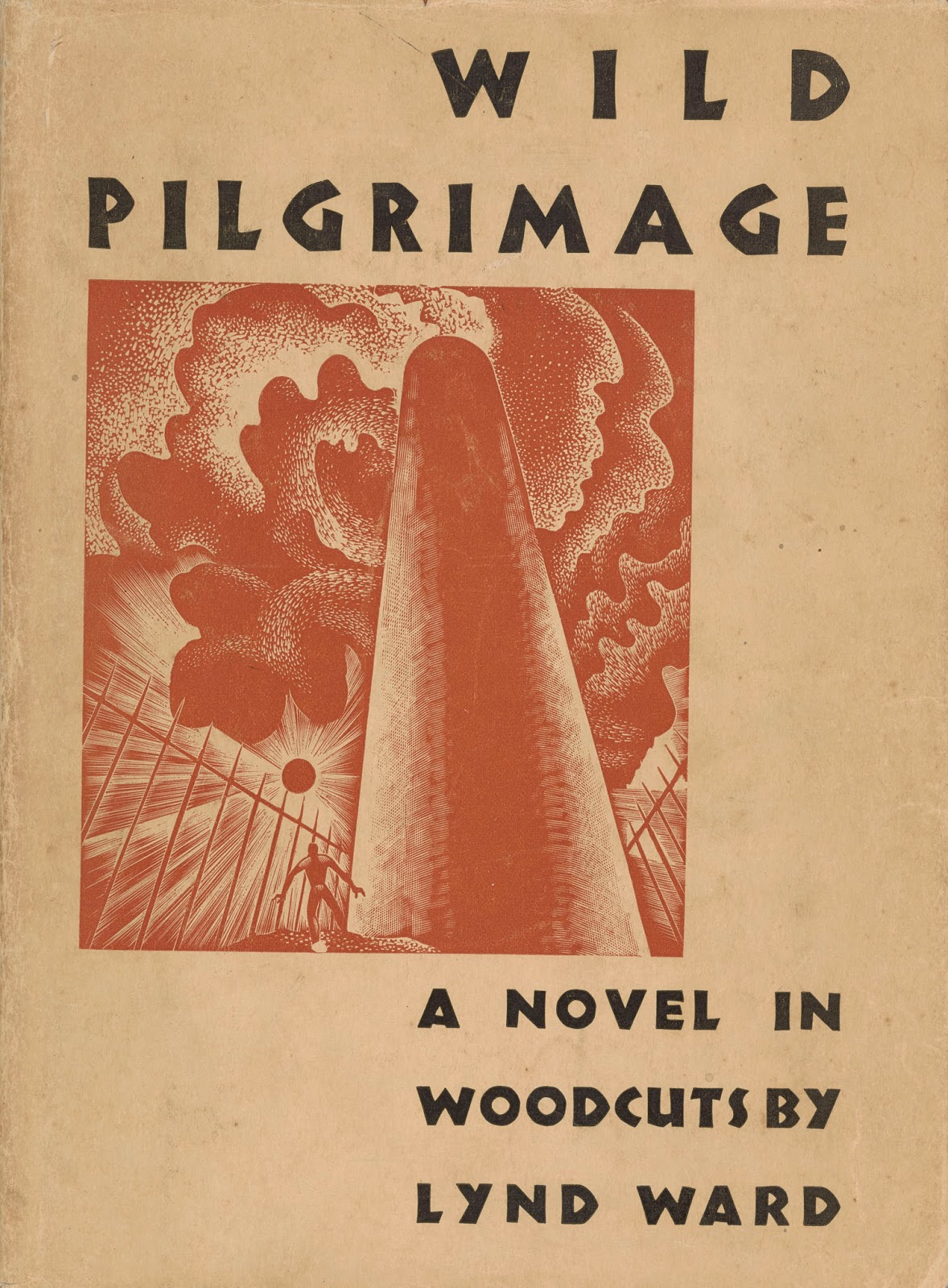 While Ward "paid the bills" with ads for U.S. Cast Iron Pipe & Foundry, he created "wordless novels" which were anything but supportive of the corporate economy. Ward's tales of workers struggling to find their identity in Depression-era America were passionate, almost anarchistic, in tone. Ward's Wild Pilgrimage also probed the psychological state of his protagonist, shifting to reddish brown color to denote a shift from reality to the embattled hero's inner world.

Ward's Wild Pilgrimage shows an obvious debt to the wordless novels of Masereel. Ward had closely studied Masereel’s work while a student in Leipzig during the 1920's. The effect of silent film on the woodcut revival ought to be considered too. But it is fascinating to consider this connection from the reverse angle - the influence of the wordless novel with its woodcut engravings on modern film.

Wordless novels plot the course of narratives exactly as storyboards are used in the motion picture industry. Webb Smith, an animator for the Walt Disney Studio, is credited with pioneering storyboards to plot the sequential development of Disney cartoons such as The Three Little Pigs in 1933. It was not long before feature films were using the technique of plotting, scene by scene, the development of the narrative with storyboards. David O. Selznick hired William Cameron Menzies, who had studied at the Art Students League of New York, to storyboard Gone with the Wind. Alfred Hitchcock was legendary for the use of storyboards in his films of the 1940's and 1950's. 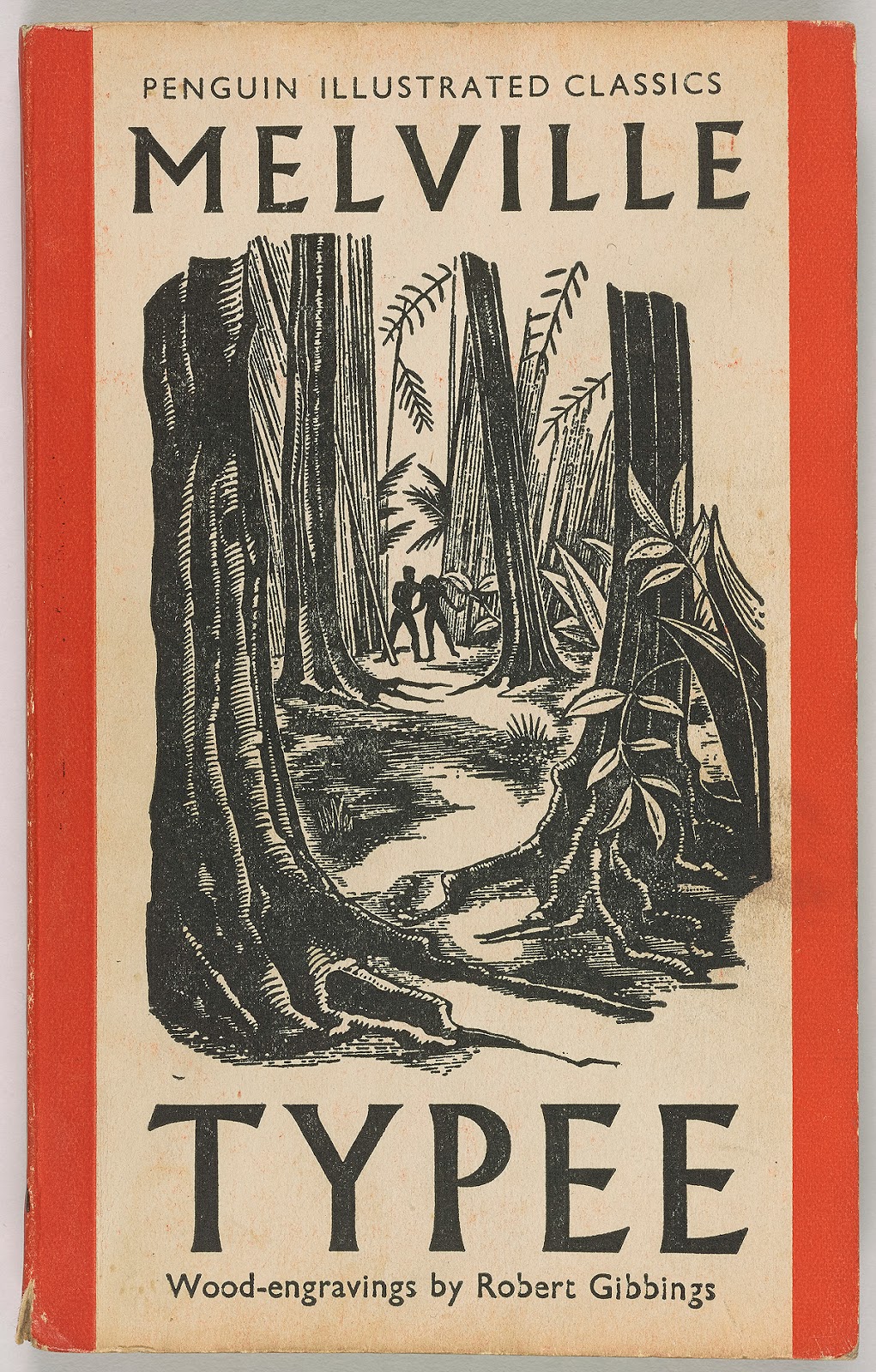 Woodcut engravings, either directly or at second-hand, contributed to some of the most dynamic media of the twentieth century. The Morgan exhibition displays several of the early Penguin Press paperback books which were illustrated with woodcut engravings. It was a long way from the Kelmscott Chaucer, but Morris would certainly have approved.

Woodcuts retain an arcane, time-honored appeal. This is inevitable, no doubt, given the Janus-like nature of the Woodcut Revival. The signature illustration of the Morgan exhibit, Vanessa Bell's woodcut for the story, Monday or Tuesday, by her sister Virginia Woolf, is a case in point. Bell's woodcut appeared in an edition printed on the hand-operated printing press of the Hogarth Press, owned by Virginia Woolf and her husband, Leonard.

But the Morgan exhibit shows that the incredible diversity of woodcut illustration absolutely defies easy categorization. The exhibit is very aptly named, Medium as Muse. There is an almost magical power at work in woodcuts. The act of carving these wondrous illustrations insures the unique, indelible individuality of the artists who create them - and fosters that of the art lovers who behold them.