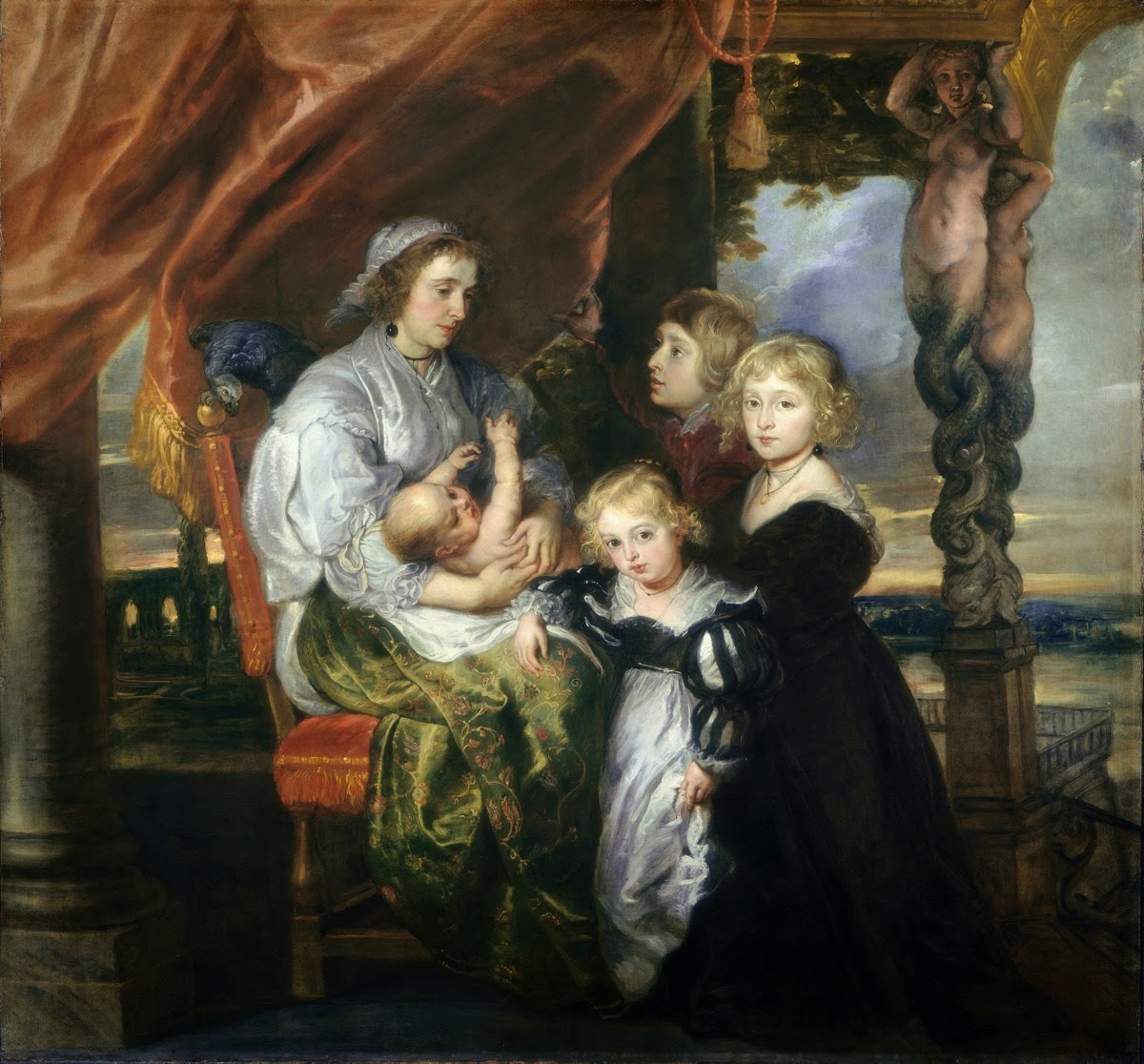 Kunstliefhebbers, or "art lovers," paid membership dues to the guild of Saint Luke. Part dilettante, part groupie, a liefhebber could gain insights into art and into the practical realities of the art world denied to the rest of the Dutch citizenry. Liefhebbers were commercially well-positioned also, on the inside track for purchasing new paintings as they became available. The Dutch were almost always astute businessmen, whether or not they were liefhebbers.

I like to use the term "art lover" in my reviews, as it sounds much better than "museum patron" or "gallery visitor." It is also more accurate. Most people who go to art museums on a regular basis really do love art. They are modern day liefhebbers and I like to think of myself as one too.

I have two extraordinary women to thank for nurturing the art lover in me. My mother, Camille McKee Voves, planted a deep-rooted (if slow to bloom) appreciation of art. My wife, Anne Lloyd, is an accomplished artist. The example of her vision and inspired work ethic, in ceramics and portrait painting, constantly informs my reflections on the visual arts. Thanks to both of them, I have come to realize that the "magic" of art is the result of an uncompromising dedication to depicting the world as the artist sees it.

Sir Kenneth Clark, of Civilization fame, also deserves my "liefhebber" gratitude. If one engages in "name-dropping," why not go with the best? 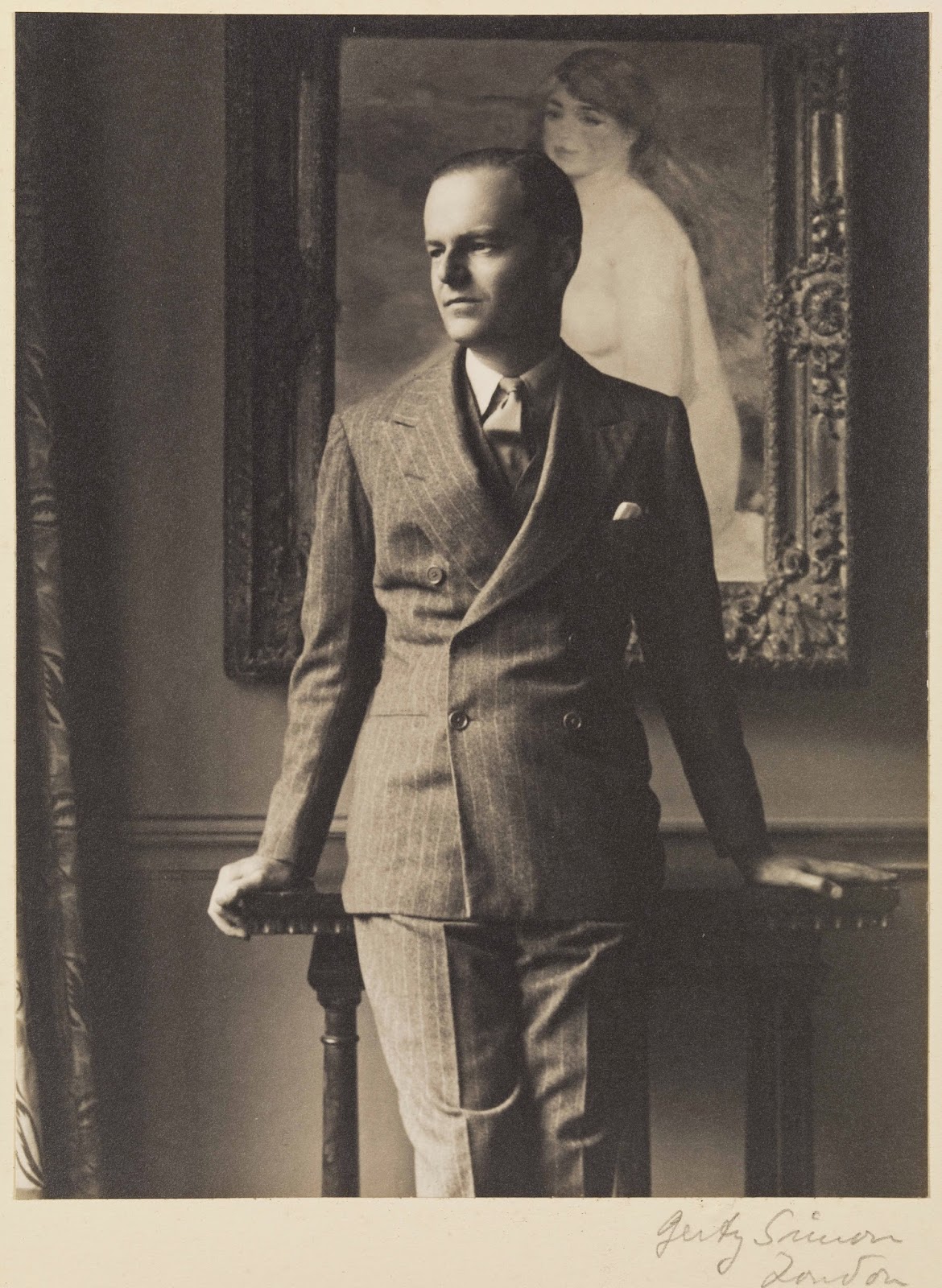 The Tate Gallery in London is preparing an exhibition, opening in May 2014, to explore Kenneth Clark's profound impact on the way that millions of people have come to look upon art and the world. As a writer, scholar and broadcaster, Clark was a worthy successor to the Renaissance humanists he discussed in Civilization way back in 1969.

The final remarks of Civilization, in which Clark reflected upon the promise and perils of the human condition, are among the most moving statements of what it means to be a sensitive, caring person that I know of:

On the whole, I think that knowledge is preferable to ignorance, and I am sure that human sympathy is more valuable than ideology... And I think we should remember that we are part of a great whole, which for convenience sake we call nature. Above all, I believe in the God-given genius of certain individuals, and I value a society that makes their existence possible.
It was a pleasant surprise, recently, to chance upon a book which Kenneth Clark had written back in 1938 while he was the Director of the National Gallery in London. One Hundred Details From the National Gallery was a pioneering correlation of art images and commentary, a liefhebber's delight.

In this wonderful book, republished in a new edition with full color illustrations in 2008, Clark compared aspects of paired paintings from the National Galley collection. His selection of the "details" often highlighted unconventional relationships.

A great student of the way that artists have portrayed the human hand, Clark matched Peter Paul Rubens' Susanna Lunden (1635) with Hans Holbein's Christina of Denmark, Duchess of Milan (1538). Rubens was one of the first great landscape painters, among many other pursuits in his busy life. The "undulating hills and waterfalls" of Susanna Lunden's crossed hands contrasted with the pyramid-shaped form of the hands of Holbein's Duchess Christina as she tightly grips her leather gloves.

Clark wrote that he chose these "details" from the National Gallery's Old Masters "chiefly for their beauty" and because they "have something in common, either of movement and design or of subject and mood."

Clark certainly did not aim at creating controversy through pairing conflicting visions of art. "Great pictures grumble at each other," Clark noted, "insult or even annihilate each other as great men."

I could not resist the challenge of trying out Clark's approach to comparing details of two works of art. I chose two works from the National Gallery of Art in Washington, D.C. These were Rubens' oil on canvas, Deborah Kip, Wife of Sir Balthasar Gerbier, and Her Children (1629/1630) and an etching by Rembrandt, Studies of the Head of Saskia and Others (1636).

Rubens' group portrait and Rembrandt's ensemble of portrait sketches both treat the cycle of life, youth leading to maturity.

In the case of the Rubens' painting, we begin with the baby in the arms of Deborah Kip and follow a succession of her children, each a year or two older, in a circle that leads back to their mother. 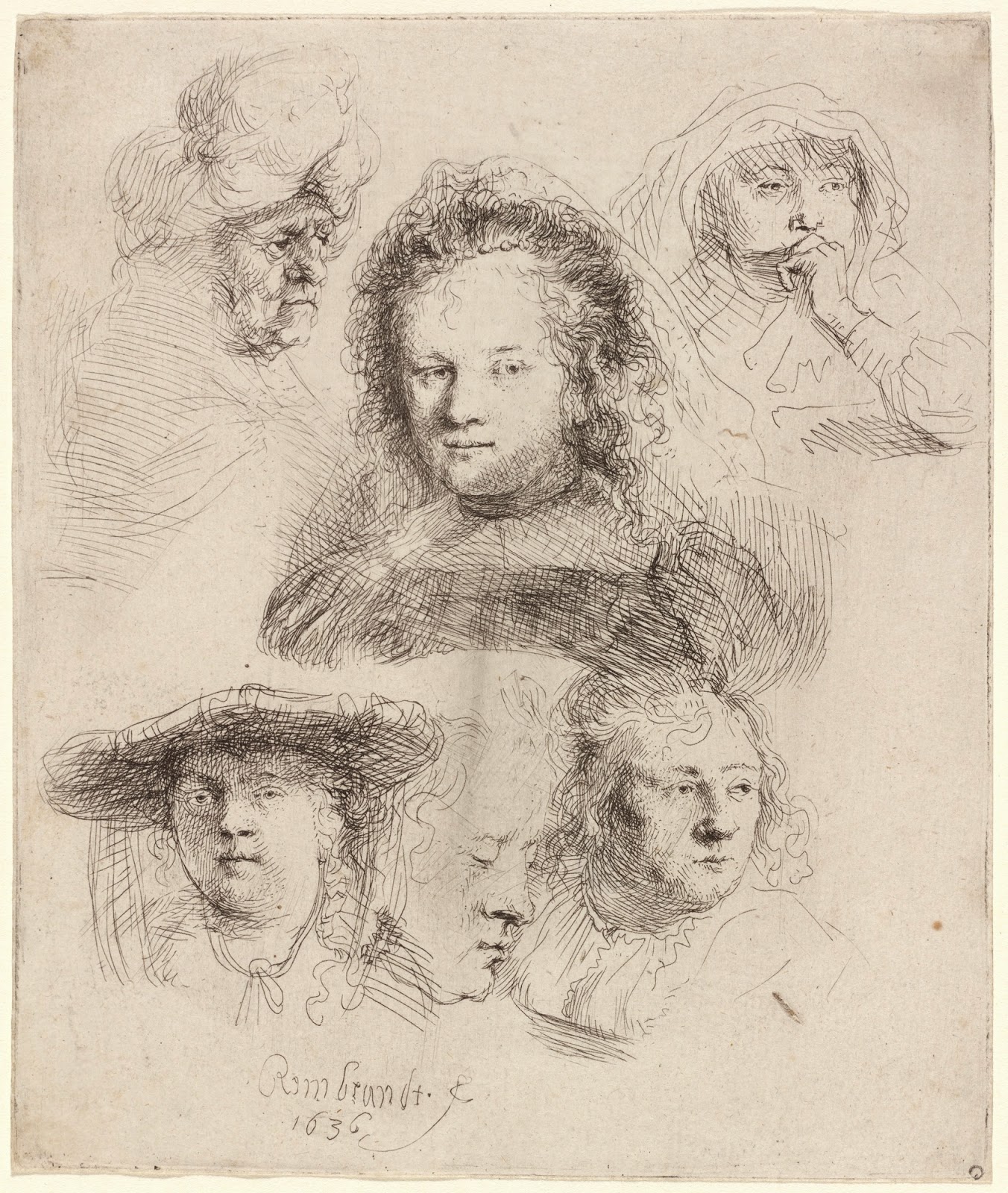 Rembrandt van Rijn, Studies of the Head of Saskia and Others (1636)

In Rembrandt's etching, a youthful Saskia is surrounded by a galaxy of portraits of women of various ages, most of whom, if not all, resemble her. This includes an elderly woman who might well have represented in Rembrandt's mind a vision of his young wife in her old age. Saskia, as we know, died in 1642, only few years after this etching was created.

The parallel between these two works, based on the theme of the cycle of life, is only a very loose one. Rembrandt frequently drew or etched works with multiple portrait studies and these may have been intended as nothing more than references for future works, perhaps one with a biblical theme. Clark, in Civilization, observed about Rembrandt's drawings that "one often doesn't know if he is recording an observation or illustrating the scriptures, so much had the two experiences grown together in his mind."

Whatever Rubens or Rembrandt intended with these works, there are comparative "details" in both them that reach out across the centuries and compel our attention. Look closely and you will see two sets of eyes focused directly upon you, one from each picture. The young girl dressed in black, Deborah Kip's daughter, Elizabeth, and "Saskia" wearing the wide-brimmed hat are both intently studying us, with a fixed, deliberate, "knowing" look that is quite unsettling. 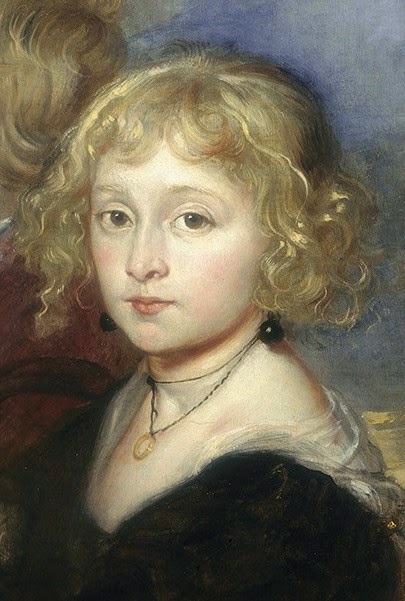 Elizabeth Gerbier (detail)
Rubens' Deborah Kip, Wife of Sir Balthasar Gerbier, and Her Children
In the Rubens' painting, the younger daughter, Susan, is also looking directly at us too, but she is too young to fully comprehend the visual exchange. The black-garbed Elizabeth and Saskia, beneath that extravagant hat, both have taken our measure - and their own. They gaze upon their world without illusion and recognize us as fellow human beings, mortal creatures with strengths and weaknesses, as they were/are. 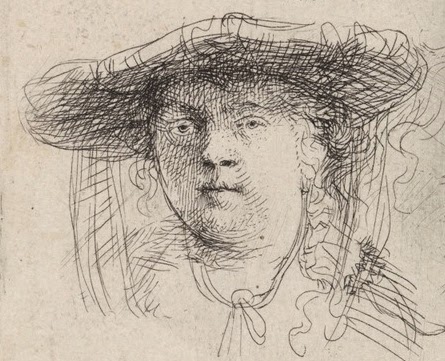 Saskia van Uylenburgh (detail)
Rembrandt, Studies of the Head of Saskia and Others (1636)

Is my reflection merely subjective musing on similar elements of two Old Master pictures? Could I be seeing "eyes" in portraits following me around the room like the ones in creepy, 1940's horror films? Perhaps... not.

My wife, Anne, has noted, that when painting a portrait, she frequently achieves masterly of an eye or a set of eyes early on, during the painting process. A sense of presence or contact is thus achieved, a relationship established between painter and subject that lasts until the picture is finished - and longer.

One eye, Anne observes, frequently is more alert, livelier and more perceptive. Anne calls it the "intense" eye. The other, by contrast, often is a "dull" eye. It is reflective, inwardly focused. The eyes of Rembrandt's Saskia certainly reveal this split focus. 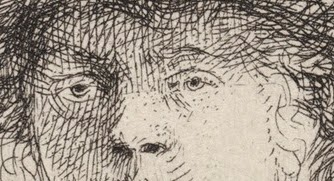 I think that this is true for Ruben's young Elizabeth as well, though more open to interpretation.

One thing is certain about Elizabeth. She has a mature, grown-up countenance far more advanced than we would expect from an adolescent girl. Rubens painted her in this and another other major work while he was visiting London in 1629-30 as the ambassador of the King of Spain and the Spanish government in Belgium. This was the era of the terrible Thirty Years War, a staggering human tragedy which weighed heavily on the mind of Rubens, a peace-loving man, and cast a malign shadow upon the whole population of Europe.

Rubens stayed with Sir Balthasar Gerbier, the father of Elizabeth, during the time he spent in England. As a peace offering from Philip IV of Spain to Charles I of Great Britain, Rubens painted one of his grandiose allegorical works. Minerva Protects Pax from Mars, in the collection of the National Gallery in London, is usually referred to as Peace and War. It is one of the most "Rubenesque" of Rubens' works. It depicts a voluptuous, nude Goddess of Peace being shielded by Minerva or Athena, clad in extravagant armor, from the belligerent "God" of War, Mars.

Peace and War is not much to the modern taste and indeed I held Rubens in low esteem for many years. Fortunately, in 2005, Anne and I saw a great exhibit of drawings and etchings by Rubens at the Metropolitan Museum in New York. The astonishing skill and the inspiring degree of human empathy evident in these works totally changed my appraisal of Rubens. 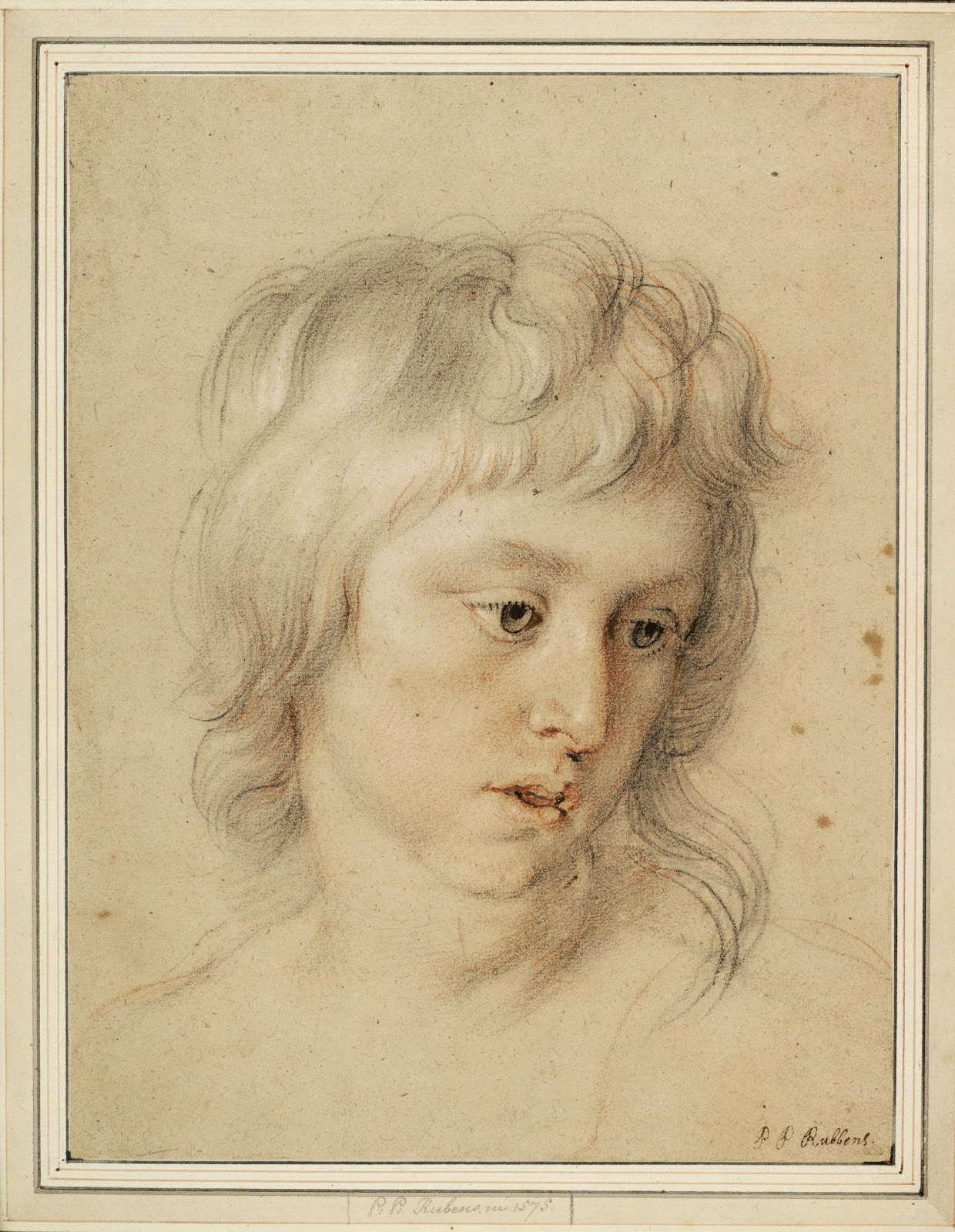 One of the works in the Rubens' exhibit was a sensational portrait of George Gerbier, a preparatory drawing for Peace and War, now preserved in the Albertina Museum in Vienna. George, Elizabeth, and Susan Gerbier (who looks out from this painting with the same innocent, questioning eyes that feature in the National Gallery family portrait) appear in Peace and War, receiving the fruits of peace.

It was Rubens' desire that this allegorical work would indeed promote the fruits of peace. Although Spain and England patched up their differences (both nations were in the process of internal collapse), the Thirty Years War raged on until 1648.

The Gerbier family was among the casualties of this terrible conflict. Rubens painted this family portrait to thank Balthasar Gerbier for his hospitality. Gerbier, a French Huguenot who was the art agent for Charles I, as well as a diplomat, should have followed Rubens' example as a peacemaker.

Instead, Sir Balthasar Gerbier followed a second, clandestine career in keeping with the murderous politics of the time. He was a double-agent, betraying fellow Protestants in Belgium to the Spanish. He then jumped ship and joined the Dutch, convincing them to let him lead a gold-hunting expedition to South America. He dragged his long-suffering wife and family to the coast of Guiana, where the troops promptly mutinied. One of his daughters was killed in the rioting. Gerbier also betrayed King Charles I during the English Civil War and then had the temerity to ask for his position back when Charles II was restored to the throne in 1660. Gerbier was curtly dismissed by Charles II, and died in disgrace a few years later.

Elizabeth Gerbier, the young girl with the soulful eyes painted by Rubens, converted to Roman Catholicism and joined a convent of nuns. This act may have been motivated by disgust at her father's duplicity or by a spiritual yearning to escape the horrors of the time.

It is vital to remember that a great work of art like Rubens' portrait of the Gerbier family can be appreciated without dwelling on a historical "backstory" like this. But it is also important to consider that "life is short and art is long." The events of the Thirty Years War are long gone. Rubens' art and Rembrandt's art remain.

In probing the eyes and the souls of George, Susan and Elizabeth Gerbier and of Saskia van Uylenburgh, Rubens and Rembrandt acted as intermediaries between them and us. And this dialog between generations will be shared by others. It will continue as long as these great paintings last and as long as art lovers, liefhebbers, remember that we humans "are part of a great whole, which for convenience sake we call nature."

Portrait of Kenneth Clark in Front of Renoir Nude

Posted by Art Eyewitness at 9:14 PM