Eakins to Tiffany: 19th Century Masterpieces at the Philadelphia Museum of Art 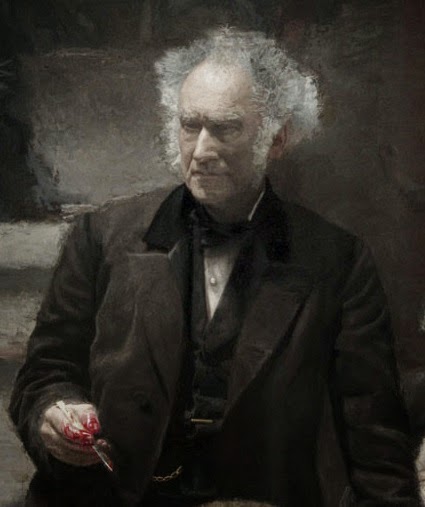 America during the decades following the Civil War entered what Mark Twain memorably called the Gilded Age. Many historians dispute Twain’s irony.  "Gilded" like another term of that period, "shoddy," casts a negative estimation upon the society of the United States between 1865 to 1900 that is largely undeserved.

Political corruption - symbolized by "Boss" Tweed of Tammany Hall and the "Whiskey Ring" bribery scandal that reached into the highest levels of the U.S. Government - was rampant. However, the 1870's and 1880's also witnessed an amazing outburst of artistic creativity. This was the era of Thomas Eakins, Winslow Homer, John Singer Sargent and Mary Cassatt.

The Philadelphia Museum of Art recently re-opened the dialog on American art during the post-Civil War era. The occasion for this re-appraisal was the return of The Gross Clinic by Thomas Eakins to the museum's American galleries. The Gross Clinic portrays the great surgeon, Dr. Samuel Gross, lecturing to medical students at the Jefferson Medical College while operating on a young patient afflicted with an infected thigh bone.

The Gross Clinic is arguably the greatest American painting of the nineteenth century. It is likewise one of the nation's most significant works of art when viewed from the perspective of America's social development. 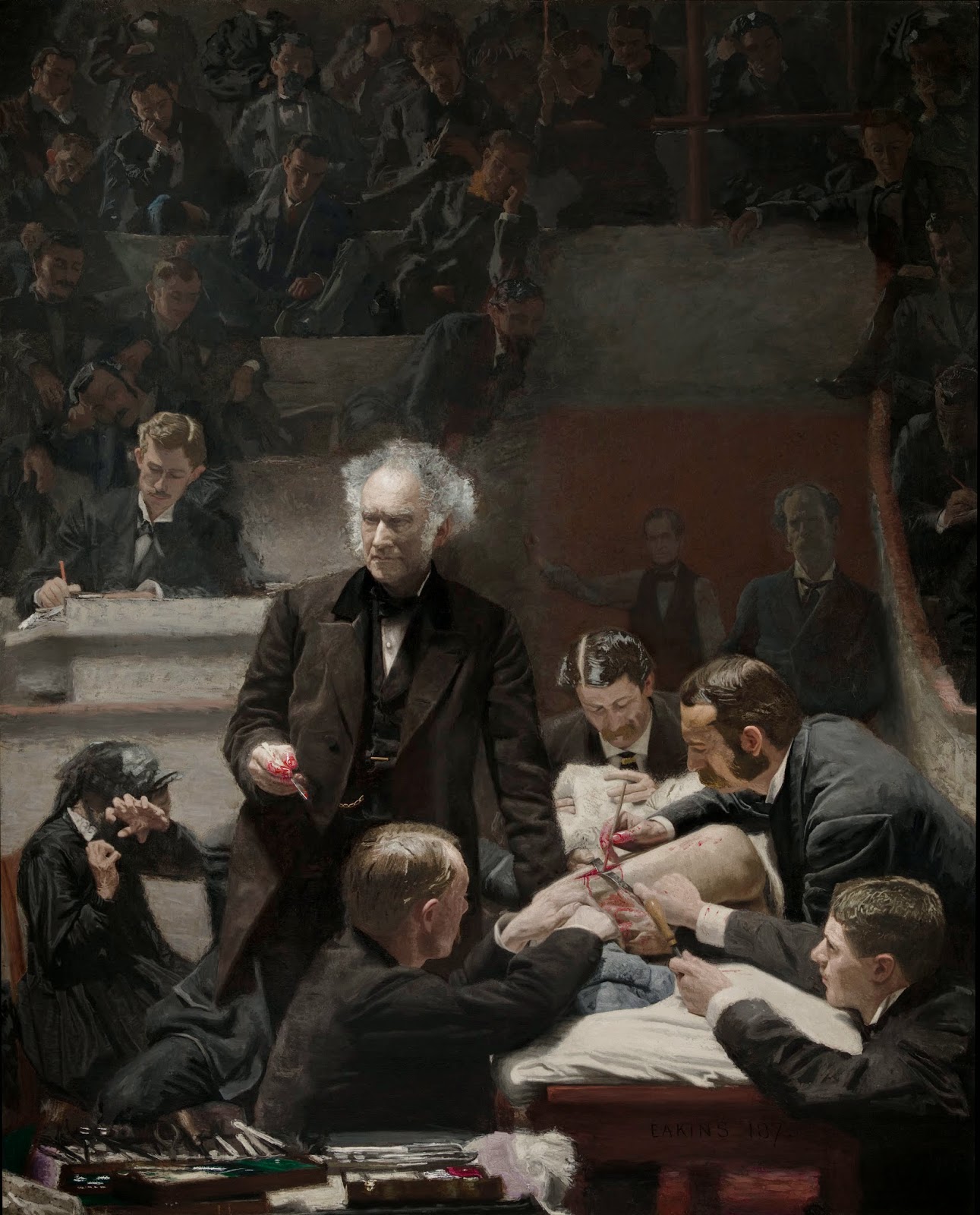 Portrait of Dr. Samuel D. Gross, as it is officially known, was painted in 1876, after exhaustive research and intensive preliminary studies. It is a very big painting, measuring 8 feet (240 cm) by 6.5 feet (200 cm). Originally purchased by admiring students of Dr. Gross for $200, the painting was redeemed for the hefty sum of $68 million, produced in a dramatic 2007 fund-raising campaign that saved The Gross Clinic from being sold away from Philadelphia.

An art work of this magnitude surely deserves a gallery all to itself.

This is exactly what the curators of the Philadelphia Museum of Art did not do when they re-hung The Gross Clinic this summer. Instead, The Gross Clinic was closely integrated with other major American masterpieces of the period to create a visually and intellectually stimulating display.

Technically speaking, this revamped presentation of Eakin's 1876 masterpiece is a "reinstallation." The Philadelphia Museum of Art and the Pennsylvania Academy of the Fine Arts (PAFA) share ownership of The Gross Clinic, which rotates between the two institutions for presentation to the public.

When it was recently displayed at PAFA, The Gross Clinic was positioned in a way to heighten its singular, almost majestic, individuality. In its present setting at the Philadelphia Museum of Art, The Gross Clinic shares the gallery walls with other works of art in very close proximity. During the nineteenth century, paintings were hung floor-to-ceiling and the Philadelphia Museum of Art evokes this Victorian era-approach to art to perfection.

Ironically, The Gross Clinic was rejected by the art jury of the Centennial Exposition, the "world's fair" that celebrated the one hundred year anniversary of America's independence in 1876. Eakin's painting was relegated to the back wall of the U.S. Army’s exhibit of a model military hospital, hanging above camp beds draped with mosquito netting.

In a way, The Gross Clinic is a sublimated Civil War picture. It depicts heroic measures undertaken by Dr. Gross to rescue a threatened human body, just as Lincoln and the Union forces had saved the endangered body politic during the war. But few of the ten million visitors to the Centennial Exposition held in Philadelphia wanted to be reminded.

Progress and prosperity interested Americans in 1876. Across the room from The Gross Clinic, another huge masterwork by Eakins captures the contrast between the accepted standards of American society at the beginning and at the culmination of the so-called Gilded Age.

Eakins’ The Agnew Clinic depicts Dr. Hayes Agnew performing a mastectomy in 1889 before students of the University of Pennsylvania's Medical Department. The parallel theme with The Gross Clinic was deliberate. But there the similarities end. Dr. Agnew and his team of surgeons are dressed in spotless surgical smocks, using sterilized instruments and have a professional nurse in attendance.

An actual nurse at the Hospital of the University of Pennsylvania modeled for Eakins. Her name was Mary U. Clymer. The look of knowing compassion on her face makes Eakin's depiction of Miss Clymer one of his most appealing portraits. 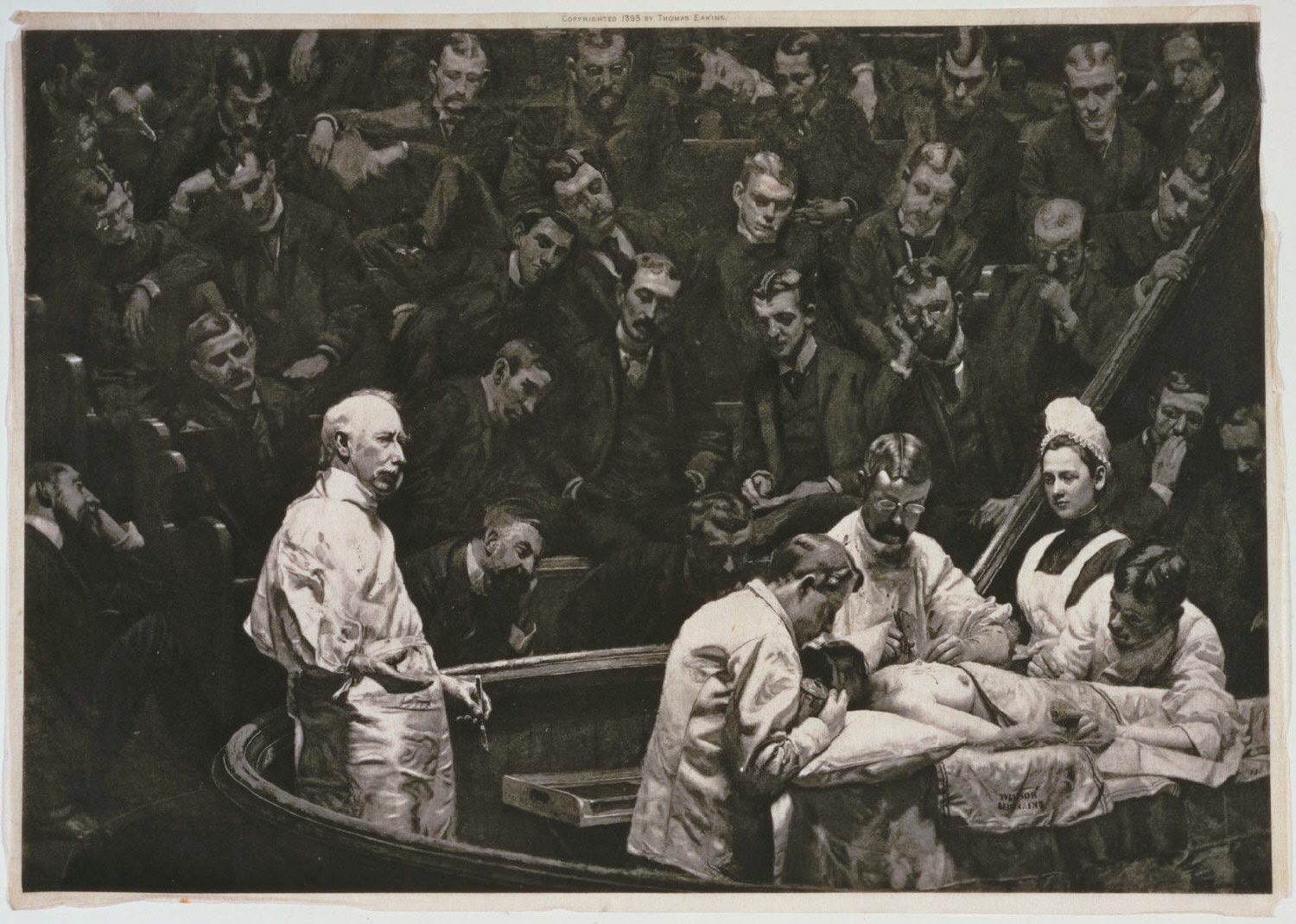 This bond between nurse and patient, however, did not save The Agnew Clinic from a storm of controversy. Perhaps anticipating the outcry over the unflinching realism of the scene, Eakins went to the exceptional length of painting a black-and-white version of the work to insure that photogravure prints made from the painting would be of exceptional quality.

The Agnew Clinic was displayed in 1893 at Chicago’s World’s Columbian Exposition. It won a gold medal - but not much public approval. That went to a painting entitled Breaking Home Ties which was voted the most popular painting at the Chicago exhibition.

A poignant narrative scene, Breaking Home Ties shows a young man beginning his life's journey as he bids farewell to his family. Sadly, the painter of this work, Thomas Hovenden, was nearing the end of his life's journey. In 1895, Hovenden died trying to save a little girl who had wandered on to train tracks near his home in Philadelphia's suburbs. Hovenden and the child were struck and killed by a rail locomotive, the supreme symbol of nineteenth century progress. 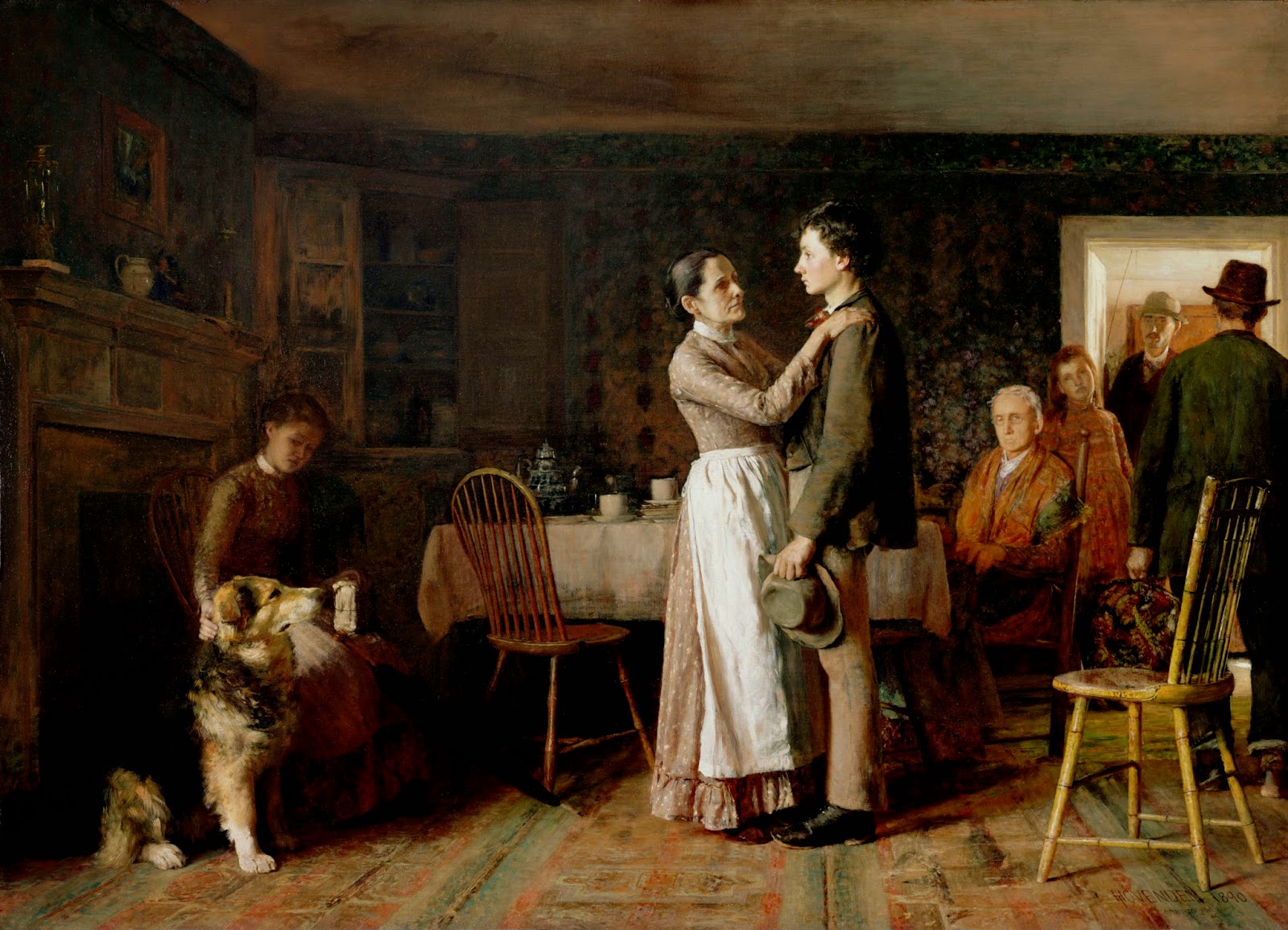 The Irish-born Hovenden had painted Breaking Home Ties in 1890. That year, a report from the U.S. Census Department revealed that westward frontier development had ceased, "there can hardly be said to be a frontier line." Young Americans like the central figure in the painting were no longer being urged to "go West." Instead, they were heading to America's booming industrial cities.

"The frontier has gone, and with its going has closed the first period of American history,” announced historian Frederick Jackson Turner in an influential lecture presented in Chicago in 1893 that later became known as the Frontier Thesis. 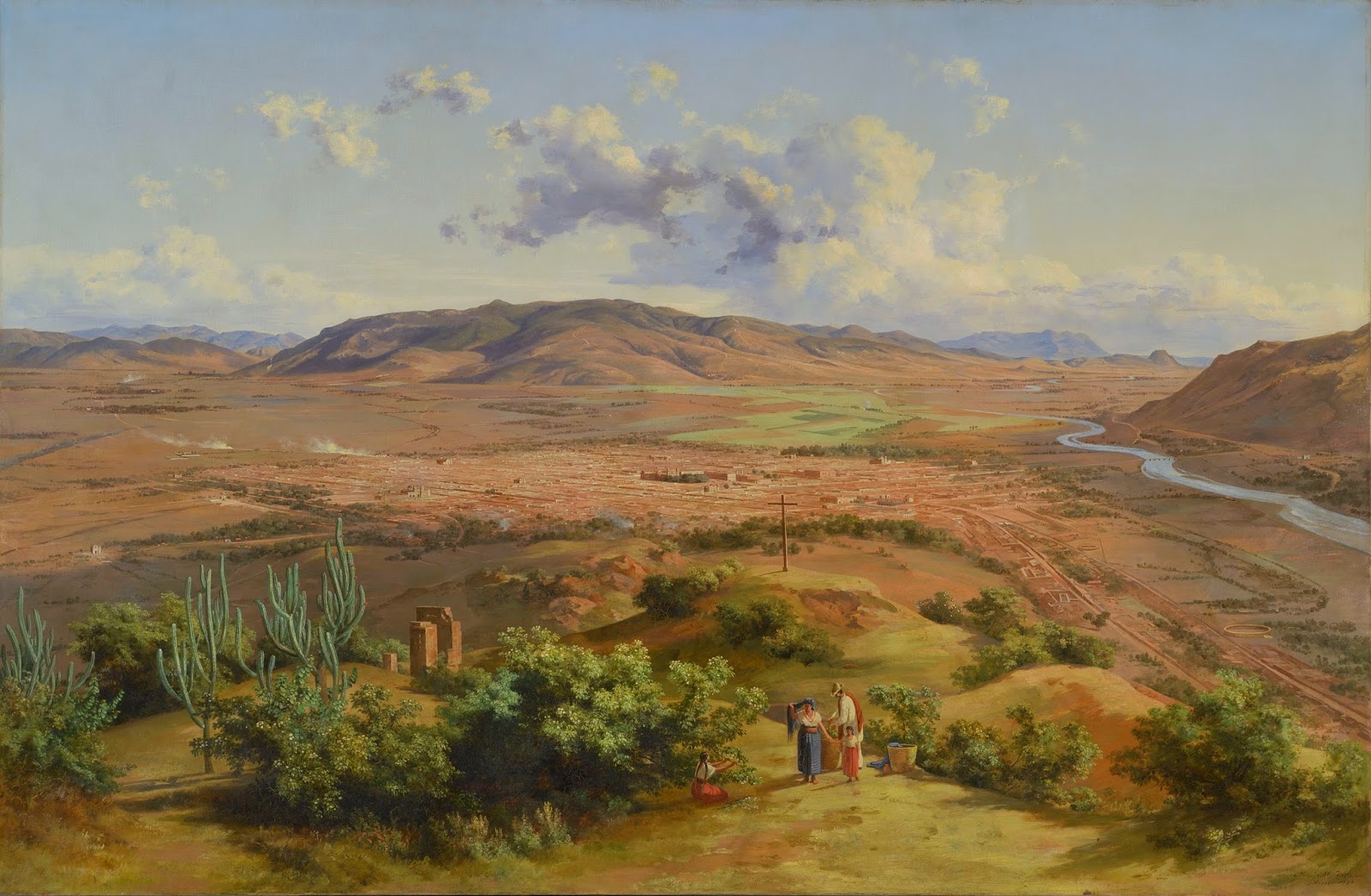 American painters had long been fascinated with the West. Grand Canyon of the Colorado River, by Thomas Moran, and a similar, if smaller, work, Valley of Oaxaca, painted in 1888 by Mexican artist José Maria Velasco, highlight the frontier "thesis" of American art. Other works in the gallery by John Singer Sargent and Mary Cassatt reveal that the geographic trend noted by the U.S. Census was also taking place in the American art world. Indeed, it had started well before 1890.

Sargent and Cassatt were American artists who responded to the call of Western civilization in Europe rather than the Western frontier. They were joined by the talented African-American painter, Henry Ossawa Tanner, who went on to create some of the greatest religious art ever painted by an American artist. 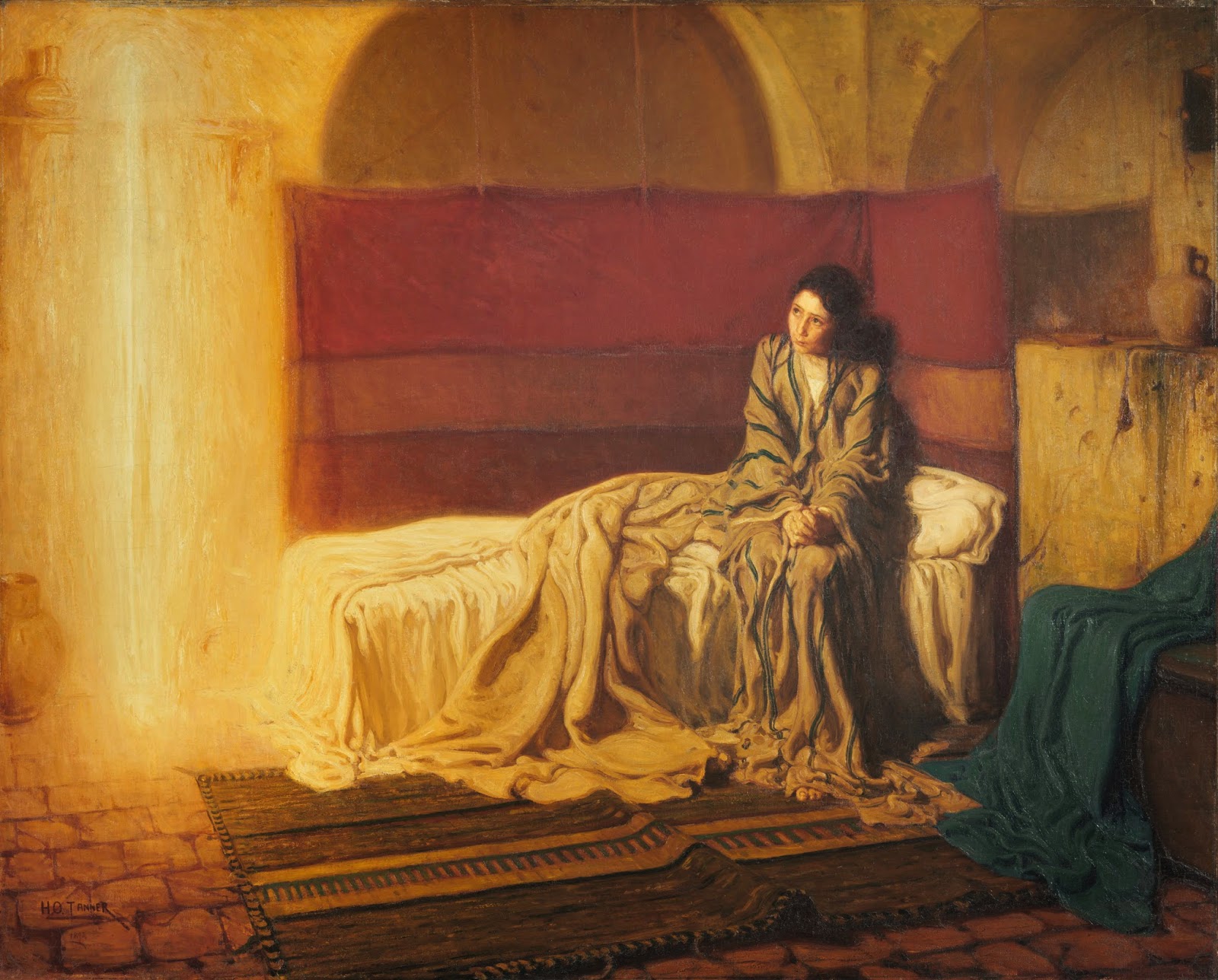 
Sargent, Cassatt, Tanner and other Europe-bound artists were thus pioneers of a different sort, helping to create a global, international focus for American art.

Sargent (1856-1925), who was born in Florence, Italy, spent almost his entire life in Europe. Sargent's "swagger" portraits of the rich and famous of Europe - and rich Americans visiting there - made him rich and famous. Likewise, Cassatt (1844–1926), after training at PAFA and briefly working in Chicago, joined the celebrated circle of the Impressionists.

The two paintings in the Philadelphia gallery by Sargent and Cassatt are transitional works, pointing in the direction they and American art would take in the years to come. 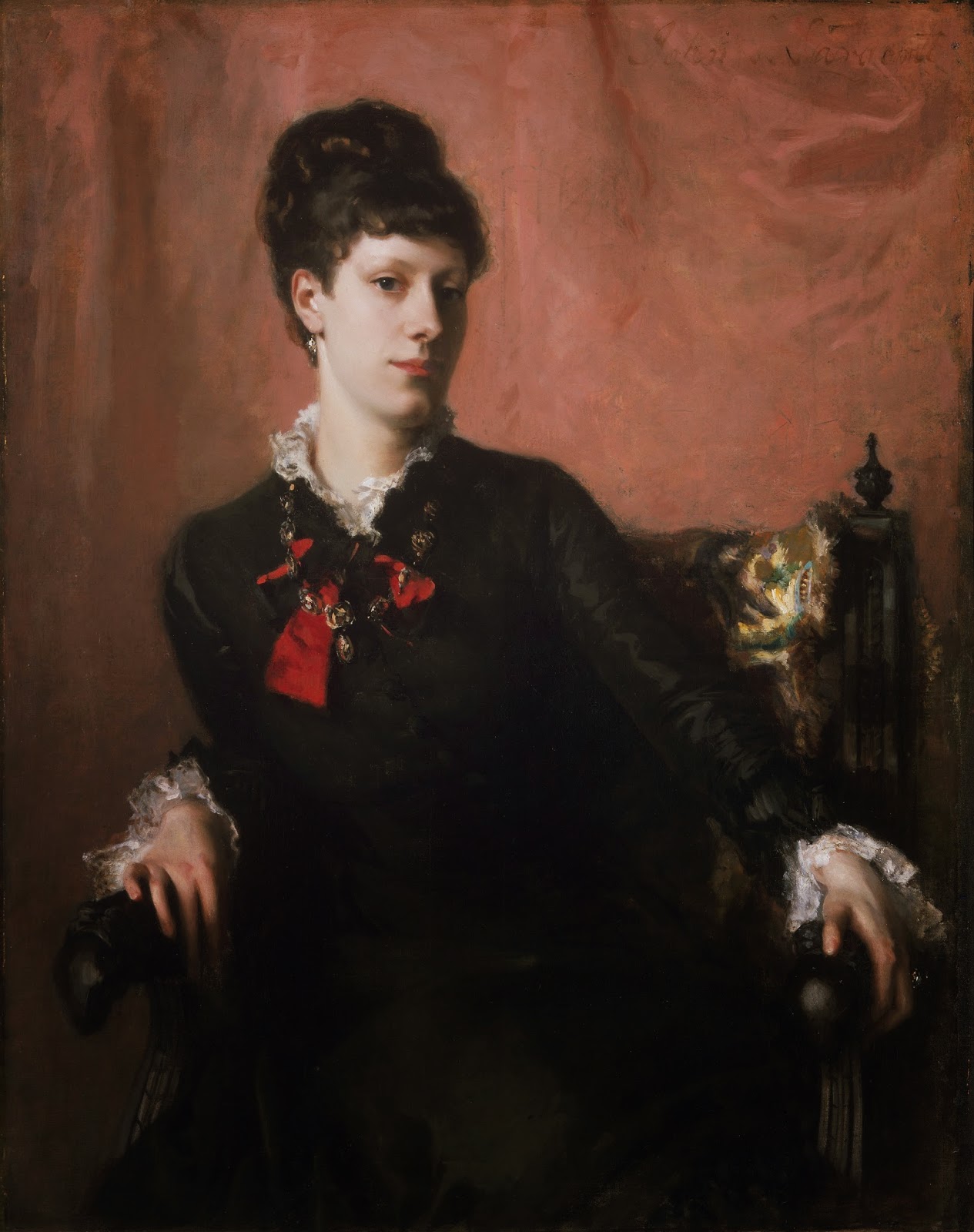 Sargent's painting of a young lady with an imposing name, Frances Sherborne Ridley Watts, was in fact the portrait of his childhood friend, "Fanny" Watts (1858-1927). Sargent and his sisters had a network of friends from American families like their own, who lived and traveled extensively in Europe. Sargent painted Miss Watts while he was still studying with Carolus-Duran, one of the leading portrait painters of the era. The work retains much of Carolus-Duran's polished style. Otherwise, it is pure Sargent, a patron-pleasing likeness with acute psychological insight.

I recently attended an exhibition of nineteenth century society portraits at the New York Historical Society. The Sargent portrait among the group was unmistakable. It almost jumped off the wall. One could not say that about Mary Cassatt's On the Balcony, painted during a trip to Spain in 1873. Cassatt was still struggling to find her own voice as an artist when she returned to Europe in the autumn of 1871. She had received a commission to paint copies of the Renaissance artist, Corregio. On the Balcony is a derivative work too and only a Cassatt scholar would readily identify it as a Cassatt. 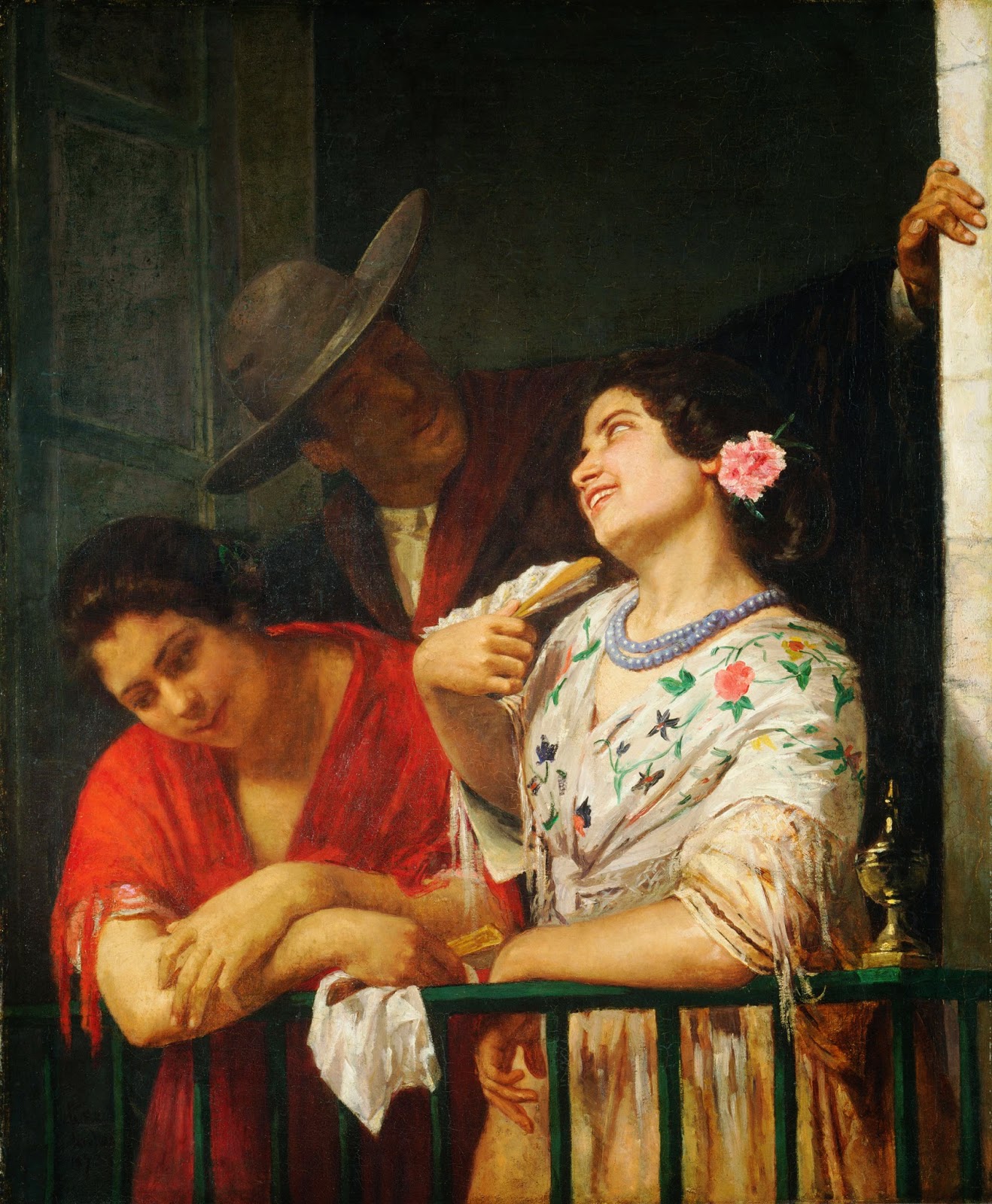 However, there is a very telling detail of On the Balcony that shows that the young Mary Cassatt was an artist with a great future ahead.

There was a mania for Spanish painting during the mid-nineteenth century. Cassatt, like Sargent and Eakins, traveled to Spain to study the great masters of Spain's seventeenth century Golden Age. Cassatt's 1873 visit was an important step toward creating her own independent style. If On the Balcony is only an apprentice-caliber work, another painting done by Cassatt at this time, Spanish Dancer Wearing a Lace Mantilla, (Smithsonian Collection) was more revealing of her talent as a portrait painter.

Another American artist travelling in Europe around this time was Louis Comfort Tiffany (1848-1933). Tiffany originally was motivated to be a painter. But after returning to the United States, where he exhibited Snake Charmer at Tangier, Africa, at the 1876 Centennial Exposition, Tiffany focused on decorative arts.

Fascinated with creating works of art in glass, Tiffany explored the range of effects, from jewel-like brilliance to subtle shades of opalescence. Then, in the 1890’s, Tiffany teamed with Arthur Nash, a master glass worker and chemist from England, to create one of the most exquisite forms of objets d'art of modern times.

Blending metallic oxides with molten glass to create iridescent art glass  - stained glass windows, lampshades, vases - Tiffany patented the process in 1894 under the  trademark name, Favrile. This brand name was based on the Old English word, fabrile, which means hand-wrought.

Tiffany’s Favrile glass pieces were deemed collectable treasures almost from the moment of creation. Louisine and Henry Osborne Havemeyer, pioneers in the collection of Impressionist painting, donated over fifty works of Favrile glass to the Metropolitan Museum of Art in 1896, an amazingly short time span in art appreciation. The Philadelphia Museum of Art has a breathtakingly beautiful example of its own on display, Flower Form Vase, which has been part of its collection since 1931.

There is incredible diversity of art works on display in this major installation of late nineteenth century works at the Philadelphia Museum of Art. Hearkening back to the heroic age of Dr. Gross, American art of the period also looked forward to bold experimentation with color and form as exemplified in Favrile glass.

As the old American frontier faded, compelling democratic vistas emerged into view. A new age of American art and culture arose, neither golden nor gilded, but Modern to its core.

Posted by Art Eyewitness at 4:45 AM