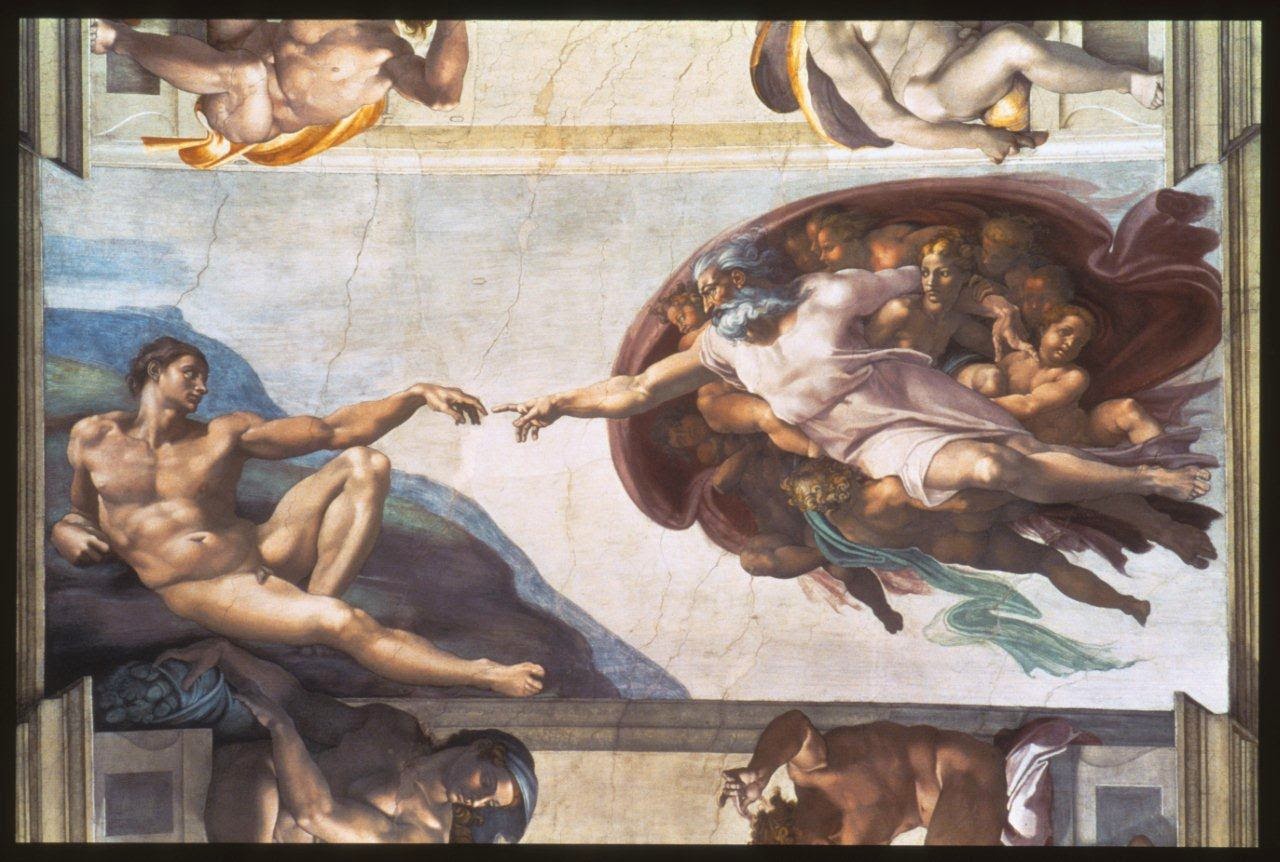 
Michelangelo Buonarroti towers over the story of Western art the way that his great statue, David, once loomed above the heads of the citizens of Florence as they walked about the Piazza della Signoria.

Il Gigante, the Florentines called the statue of the biblical hero who symbolized the Republic of Florence. The Giant.

Michelangelo was a giant too. Everything about Michelangelo is epic in scope. His life and legend confound any appraisal that attempts to interpret him based on the standards of other artists or the art theory of his time.

In his insightful new biography of Michelangelo, Miles J. Unger comes to grips with the powerful inner forces that motivated Michelangelo. Wisely, Unger lets Michelangelo’s own works of art open the door to his soul. 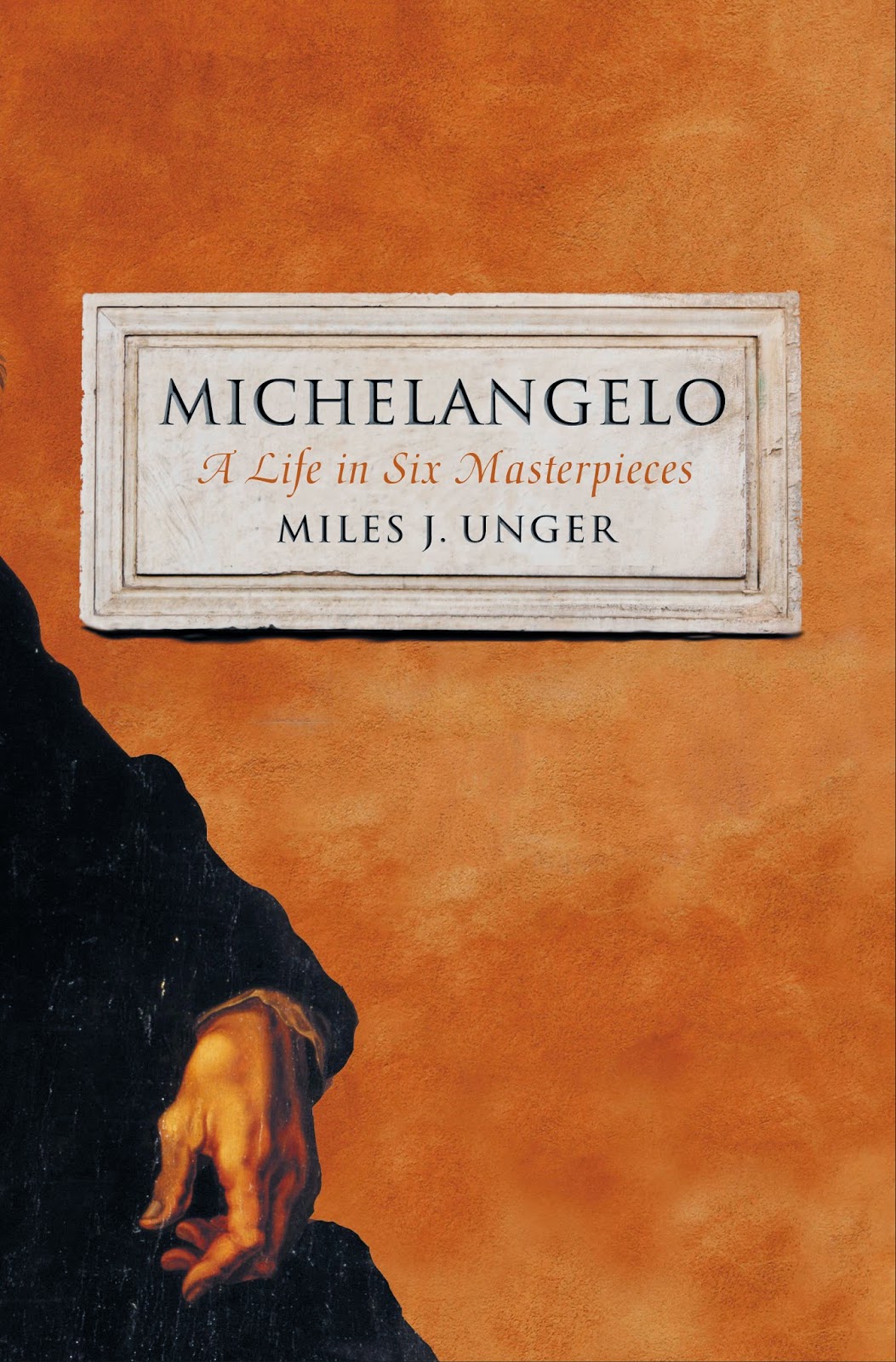 One of the key insights that Unger emphasizes about Michelangelo's character was his determination to raise the tattered banner of the Buonarroti family. According to the family tradition, the Buonarroti were the descendants of the counts of Canossa, leaders of some note in medieval Tuscany. Things had changed by the birth of Michelangelo - Michelangelo di Lodovico Buonarroti Simoni, to give him his full aristocratic-due. In 1475, it was the Medici, not the Buonarroti, who ruled Florence. The inflated self-image of Michelangelo's clan was little more than a pathetic delusion.

Michelangelo inherited a brittle, bristling sense of family honor from his cantankerous father. Unger begins his investigation of Michelangelo with a telling quote from a 1548 letter in which Michelangelo peevishly rejected the idea that he was a commercial artist.

"I was never a painter or a sculptor," Michelangelo expounded to his nephew, Lionardo,"like one who keeps a shop." 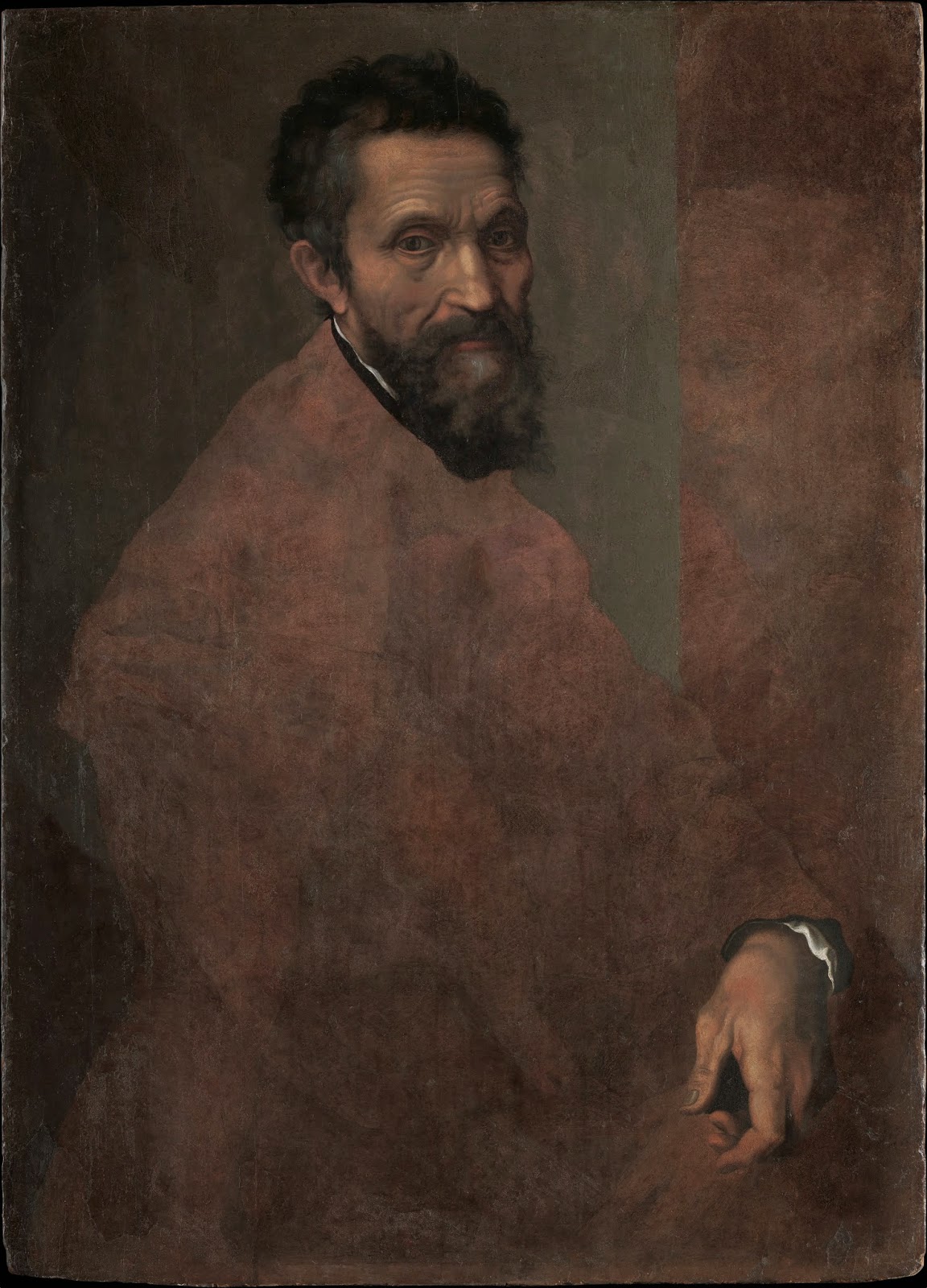 Unlike his haughty father and feckless brothers, Michelangelo was an obsessive workaholic who did not mind getting his hands dirty. He gladly labored alongside the intrepid scarpellini who cut the blocks of Carrara marble that he later sculpted into works of transcendent art.

Michelangelo was equally content to sculpt or paint all by himself - even if he did not grind and mix his own paint as fawning biographers later contended.

None-the-less, Michelangelo was telling the truth. He never was "one who keeps a shop."

When you examine the first of the six masterpieces, the Pietà, it is clear that Unger has gained the measure of Michelangelo from the very first.  Rome, where Michelangelo went to sculpt the Pietà, was the headquarters of a resurgent Papacy. The Pope and the prelates of the Vatican possessed “the resources and thirst for public display," Unger notes perceptively, that could match "Michelangelo's own ambition." 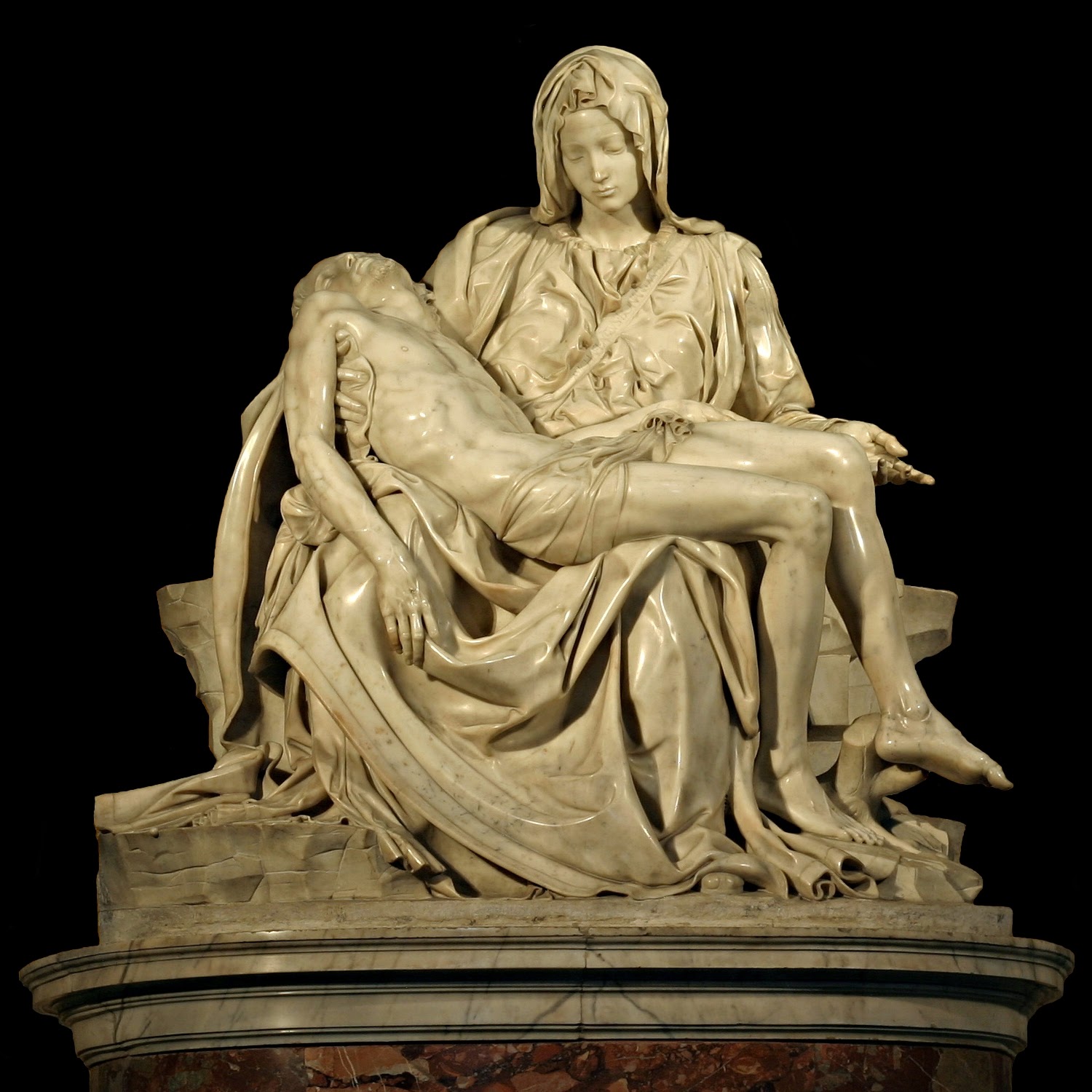 Beautifully sculpted, the Pietà was intended to make a statement rather than merely register a sale. The only work of art that Michelangelo ever signed, the Pietà struck a resounding note in the debate over the relative merits of art from antiquity and from the contemporary age.  The Pietà was - and remains - an affirmation that the artistic hegemony of the classical Greeks had ended. The Moderns had trumped the Ancients - thanks to Michelangelo!

There was much more than a display of ambition taking place with the creation of the Pietà. For the first time, the deep-rooted elements of paradox in Michelangelo's character surfaced.

Like all the great Italian artists of his time, Michelangelo shared in the Renaissance enthusiasm for Greek and Roman art. His previous work to the Pietà had been a statue of the god Bacchus that was initially mistaken for an ancient sculpture. Michelangelo, beset by strong homosexual yearnings, was clearly enamored by the classical cult of the male nude.

Michelangelo, however, was a very devout Christian. The Pietà exudes Christian virtue and faith. Michelangelo depicted the body of the crucified Christ as a nearly perfect human form, but it is the love in the Blessed Mother's face that compels our attention.

The timing of the Pietà’s creation was significant too. As Michelangelo set to work, sculpting the statue in 1498, Church authorities suppressed the puritanical faction of Girolamo Savonarola. This firebrand Dominican monk had challenged the sensual, Greek-inspired humanism of the Medici in Florence. Silenced by the Church, Savonarola's evangelical fervor merely "went to ground," rising again in Germany with the preaching of an Augustinian named Martin Luther.

There is an additional religious subtext to the Pietà, which Unger cogently discusses. Mary, the mother of Jesus, is impossibly youthful to be holding the corpse of such a mature son in her arms. That was not a problem for Michelangelo, who had studied neo-Platonic philosophy under Pico della Mirandola at the Medici court. The Pietà, in Michelangelo's interpretation, is a symbolical work, testifying to the divine mysteries of love, sacrifice and redemption.

The impact of Pico della Mirandola upon Michelangelo was profound. For Michelangelo, evoking the human form was never merely a representational undertaking. Higher truths were always involved. In the case of the David, Unger writes:

Critically for Pico, Man's place in the universe was not fixed but determined through the choices he made, for good or ill. In fact, man's unique attribute was his capacity to shape his own destiny... Michelangelo's David embodies the abstract notion of Man as the architect of his own destiny ...he represents a state of becoming rather than of being, defined by a supreme act of will. His identity is not complete but forged in battle driven by a fierce spirit.

Michelangelo's David, like the Pietà, is a powerful expression of religious conviction - Michelangelo's version, not necessarily the Church's. It was fortunate for Michelangelo that he sculpted the David a decade before Luther's 1517 protest sparked the Protestant Reformation. With his later fresco paintings in the Sistine Chapel, Michelangelo's unorthodox version of Christian doctrine brought him perilously close to charges of heresy.

Michelangelo’s own “fierce spirit” would be tested in a battle of wills with Pope Julius II over the painting of the ceiling of the Sistine Chapel. Temperament, however, not theology, dictated the course of their famous confrontations. Unger ably recounts this familiar saga. But once again, close inspection of this famous work reveals telling details about Michelangelo that are easy to otherwise miss.

Art historians of the 1500's like Giorgio Vasari noted that Michelangelo alone succeeded in all three artistic disciplines - sculpture, painting and architecture - at the highest caliber of achievement. In his page of studies for the Libyan Sibyl of the Sistine Chapel ceiling, we can see Michelangelo uniting all three in powerful, harmonious combination. 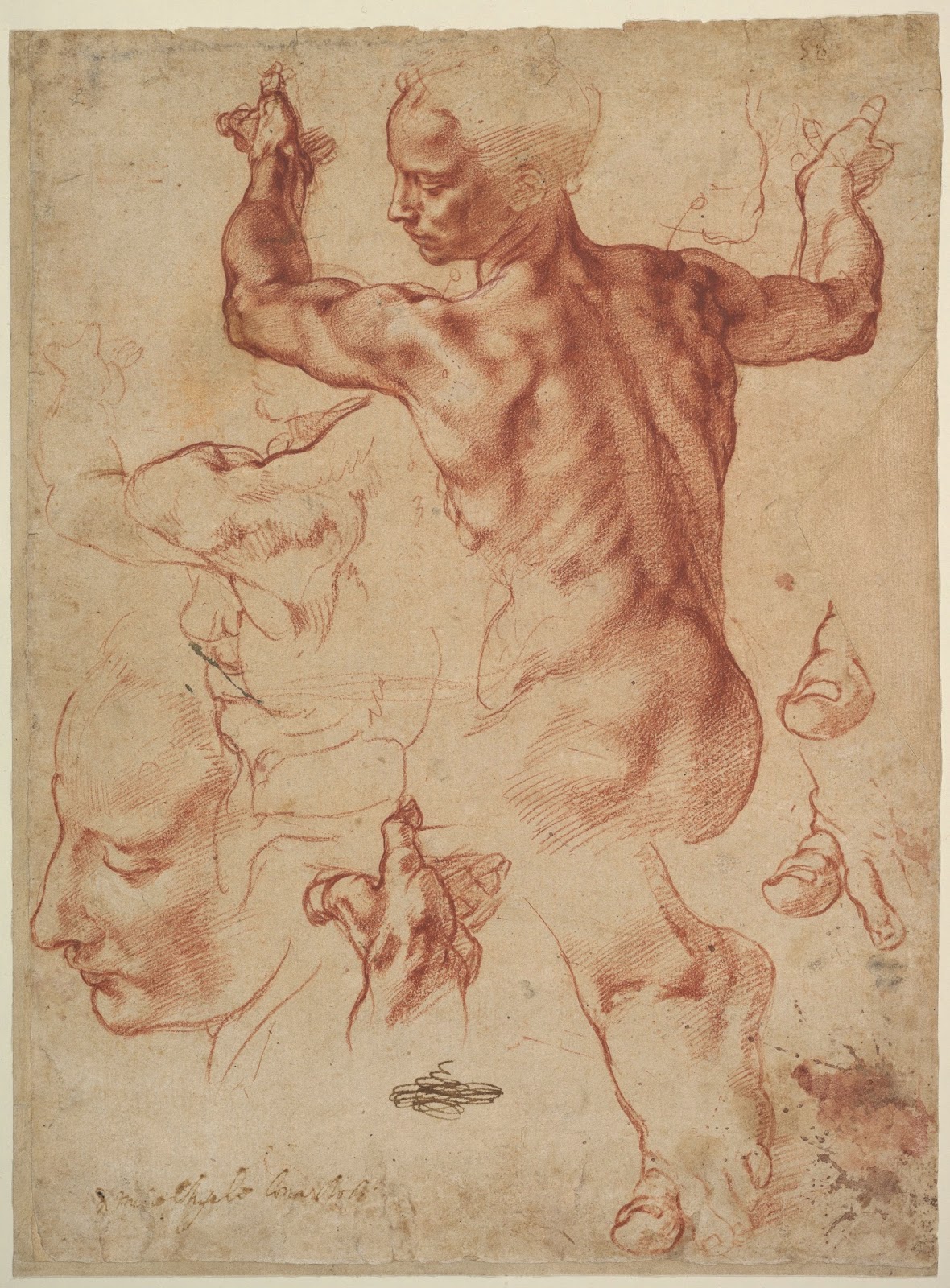 Michelangelo's mastery of painting and sculpture are clearly apparent in this beautiful preliminary draft, now in the collection of the Metropolitan Museum of Art in New York. The architectural role of the Libyan Sibyl and her counterparts needs to be emphasized, as well. Michelangelo created an elaborate structure for the central narrative panels of Old Testament scenes. As Unger notes, there is no proper perspective from which to view the Sistine Chapel ceiling. But Michelangelo’s supporting cast, prophets and sibyls, the ignudi and ancestors of Christ, are positioned to secure the explosive, disorienting depiction of cosmic drama from the Book of Genesis.

The Creation of Adam, with the electric spark of life passing from the outstretched index finger of God to the hand of Adam, is the supreme statement of life as "a state of becoming rather than of being." This scene marked the great turning point in the Sistine Chapel frescos, in Michelangelo's art and indeed in the very course of the Renaissance as a cultural phenomenon.

Adam at the moment of creation is a model of perfection. The remainder of the scenes on the Sistine ceiling show human degradation, ending in the drunkenness and shame of Noah. As in art, so in life. The years following the triumphant completion of the Sistine ceiling frescos in 1512 were filled with frustration and difficulty for Michelangelo. For Europe, the early hope that the Reformation would purify Christendom ended in horrifying campaigns of religious warfare, climaxing in the sack of Rome in 1527.

By the time Michelangelo returned to the Sistine Chapel in 1535 to paint the Last Judgment on the wall behind the altar, he was a man transformed. Fits of melancholy, family anxieties and weariness, mixed with a sense of human sinfulness, blighted his outlook. And this dark vision is clearly apparent in Michelangelo's disturbing depiction of the Apocalypse.

In spirit, the Last Judgment is exactly what its title states. It is a work about passing judgment, rather than redemption. Christ raises his arm in reproach of the doomed souls of the damned, like David hurling his sling against Goliath. Christ is coldly taking aim against the wicked. It is a hugely disturbing expression to see on the face of the Redeemer, as the looks of fear in the eyes of the saved bear witness. 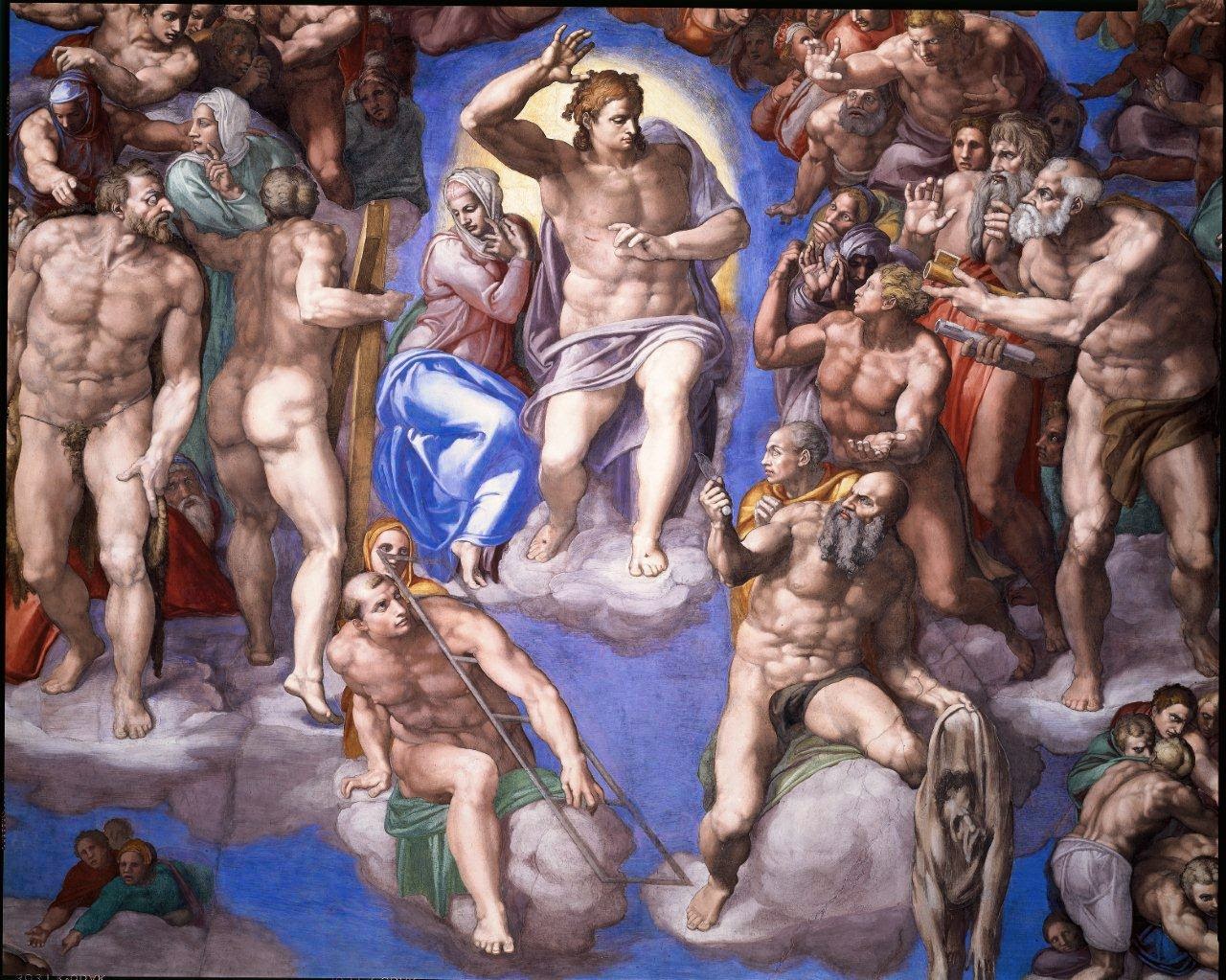 Perhaps the most striking and terrifying element of the Last Judgment is the image of the cowering Blessed Mother. Mary, the beloved intercessor for God's mercy, looks away, powerless to intervene. Unger writes that early drafts show Mary with "her arms outstretched in a gesture of supplication." But Michelangelo abandoned these plans, relegating Mary to a helpless bystander.

Nearly a half century separates Michelangelo’s tender portrayal of Mary in the Pietà from the "passive mourner" in the Last Judgment. The Renaissance has passed. The Counter-Reformation has begun.

Yet, it would be entirely mistaken to think of Michelangelo's works being determined by current events. He was obviously affected by the temperament of his times. But Unger's astute study clearly shows that Michelangelo always remained an artist in command of his powers. He vigorously responded to and creatively reshaped the world around him from youth to old age.

Michelangelo, Unger notes in this wonderfully humane biography, was "simply a man, mortal and very flawed." In many ways, Michelangelo remained a "roughed-out" and unfinished figure like his self-portrait as Nicodemus in the late Florentine Pietà. This work had been intended for his tomb and it is very fitting that it is not placed there.