Picturing Mary at the National Museum of Women in the Arts 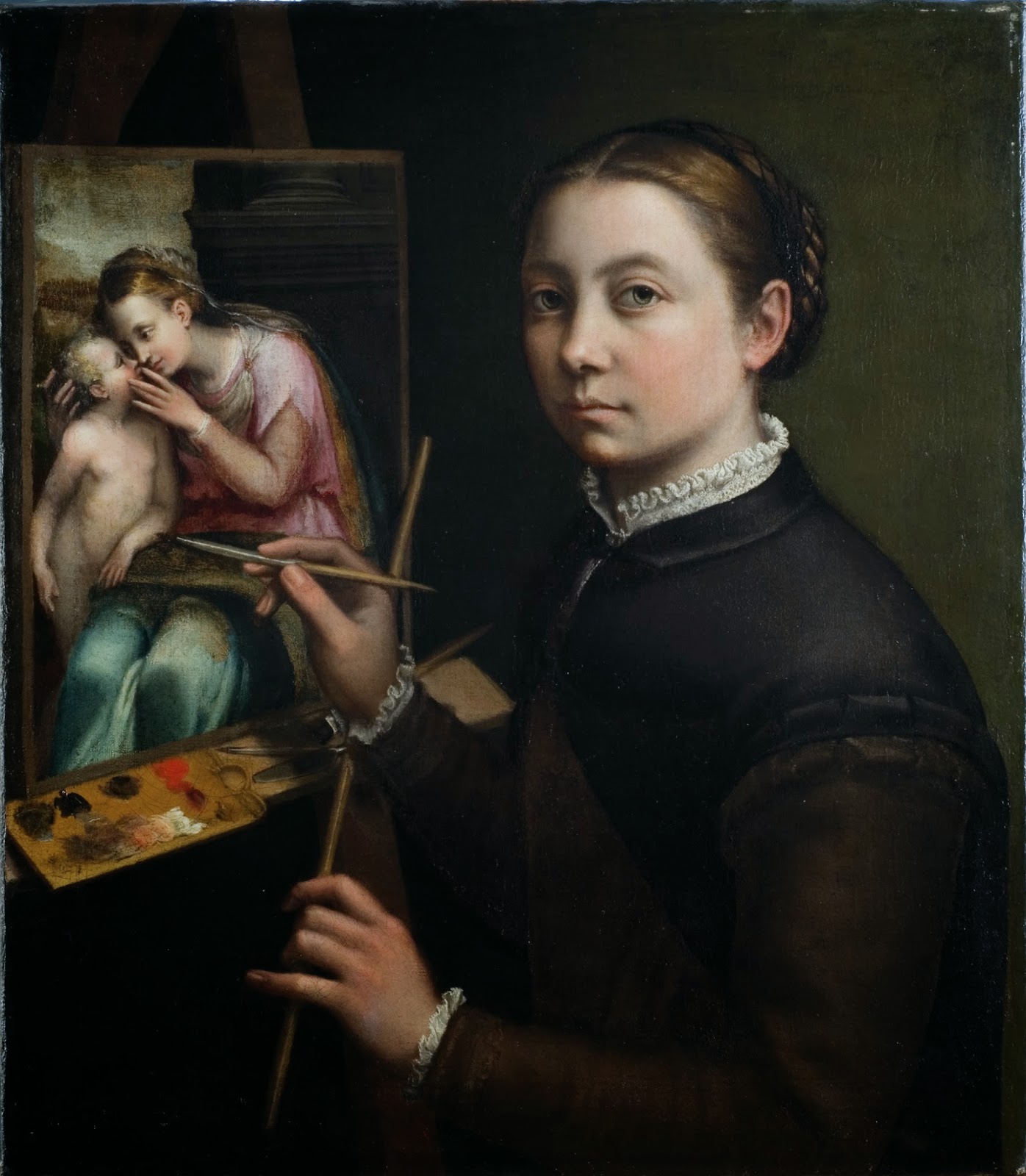 Theme and variation are such an accepted part of music composition that it is easy to overlook the role of reprising memorable images in the visual arts. We have grown accustomed to think of a work of art as a unique creative statement. It will never be crafted again or at least not in the same way by the same artist. Yet, many a painter or sculptor has taken an established artistic convention and repeatedly explored its subject matter in distinctive ways.

A recent visit to the National Museum of Women in the Arts in Washington, D.C., reinforced the central role of "theme and variations" in art, specifically religious art.

Picturing Mary: Woman, Mother, Idea at the National Museum of Women in the Arts has been on my exhibit radar since it opened in early December 2014. With outstanding works from the dawn of the Renaissance to sensational paintings by Caravaggio and Tiepelo during the Baroque era, Picturing Mary establishes the central role of Mary, the mother of Jesus, in the cultural development of the West.

This magnificent exhibition at the National Museum of Women in the Arts presents the time-honored visual formats for treating the episodes of Mary's life. From these events is derived the Christian conception of Mary as the mother of Jesus the Messiah, the human, yet divine, redeemer of humanity.

The "themes" of Mary's life and legacy are based on a very small body of New Testament writings. But the "variations" - the theological, social and artistic implications derived from the biblical sources - are astonishing in their world-wide scope and enduring appeal.

From the early Middle Ages onward, artists were inspired by the events of Mary's life. They took as their subject such events as the angelic annunciation to Mary that she would be the mother of Jesus. These scenes were painted, sculpted, carved and embroidered again and again and again. 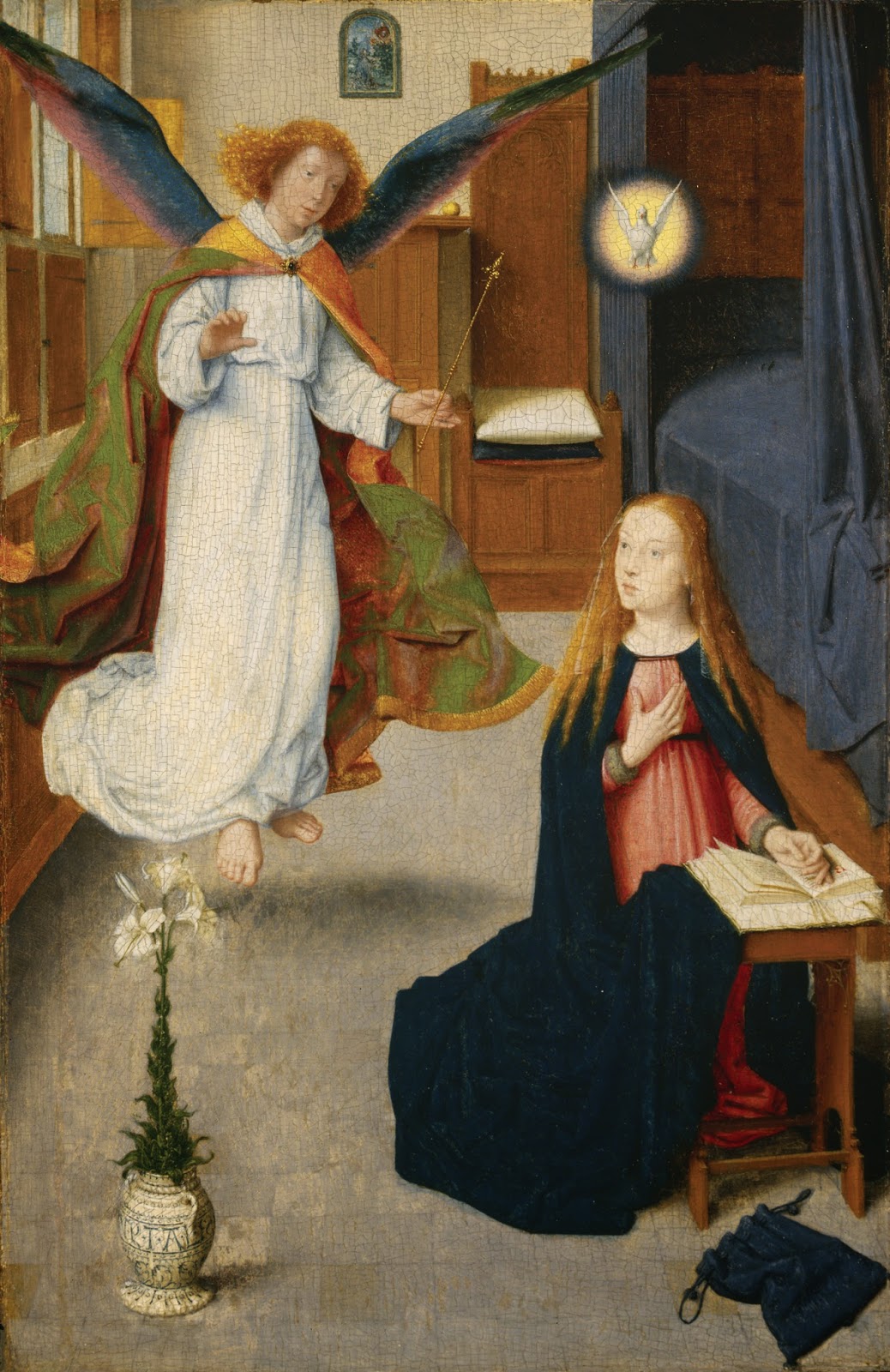 Picturing Mary focuses upon Marian imagery in the classic Western artistic conventions. The exhibit does not examine the role of Mary in the icon painting of the Eastern Orthodox Christian tradition. In an earlier post, I reviewed the Heaven and Earth: Art of Byzantium exhibit which appeared at the National Gallery in Washington. The fascinating ways that Mary was - and continues to be - depicted in Orthodox icons was an important feature of that great exhibit.

Taking up the theme and variations idea, I want to focus on the way that artistic convention is used, reused and passed on to a succeeding generation.

One of the first paintings in Picturing Mary that seized my attention was Fra Filippo Lippi's Madonna and Child. This work is noteworthy on a number of counts. It was painted in the 1460's, a half century before Raphael's more famous Madonna paintings. The format of Lippi’s painting, showing the embrace of Mary and Jesus, had been used before. But the degree of intimacy that Lippi imparts to this scene is very significant. Fra Angelico (1395 – 1455), painted Madonnas too, but the emphasis in his work was spiritual, the physical contact between mother and child being more reverent and detached.

Fra Filippo Lippi (1406-1469) and Fra Angelico were both Catholic monks who were accomplished artists. Lippi was placed as a child into a Carmelite monastery after his parents died. As a novice in the order, he watched the short-lived genius, Masaccio, paint his epochal religious frescoes and was motivated to become an artist himself.
It is purely subjective to speculate that the tight embrace of Mary and Jesus reflects the orphaned Lippi's lost childhood. But there is a great deal of life experience from Lippi's biography that fuels such thoughts.

Although he was ordained as a priest in the Carmelite Order, the religious life did not suit Fra Filippo. In 1456, while working on a painting for the  chapel of St. Margherita in Prato, near Florence,  Lippi became infatuated with  a young girl, Lucrezia Buti,  who lived in a nearby convent. In the ensuing scandal, which is luridly recounted in Vasari's Lives of the Artists, Lippi was released by the Church from his vows. The son of Fra Filippo and Lucrezia, Filippino Lippi, carried on the artistic tradition, becoming a major painter himself. 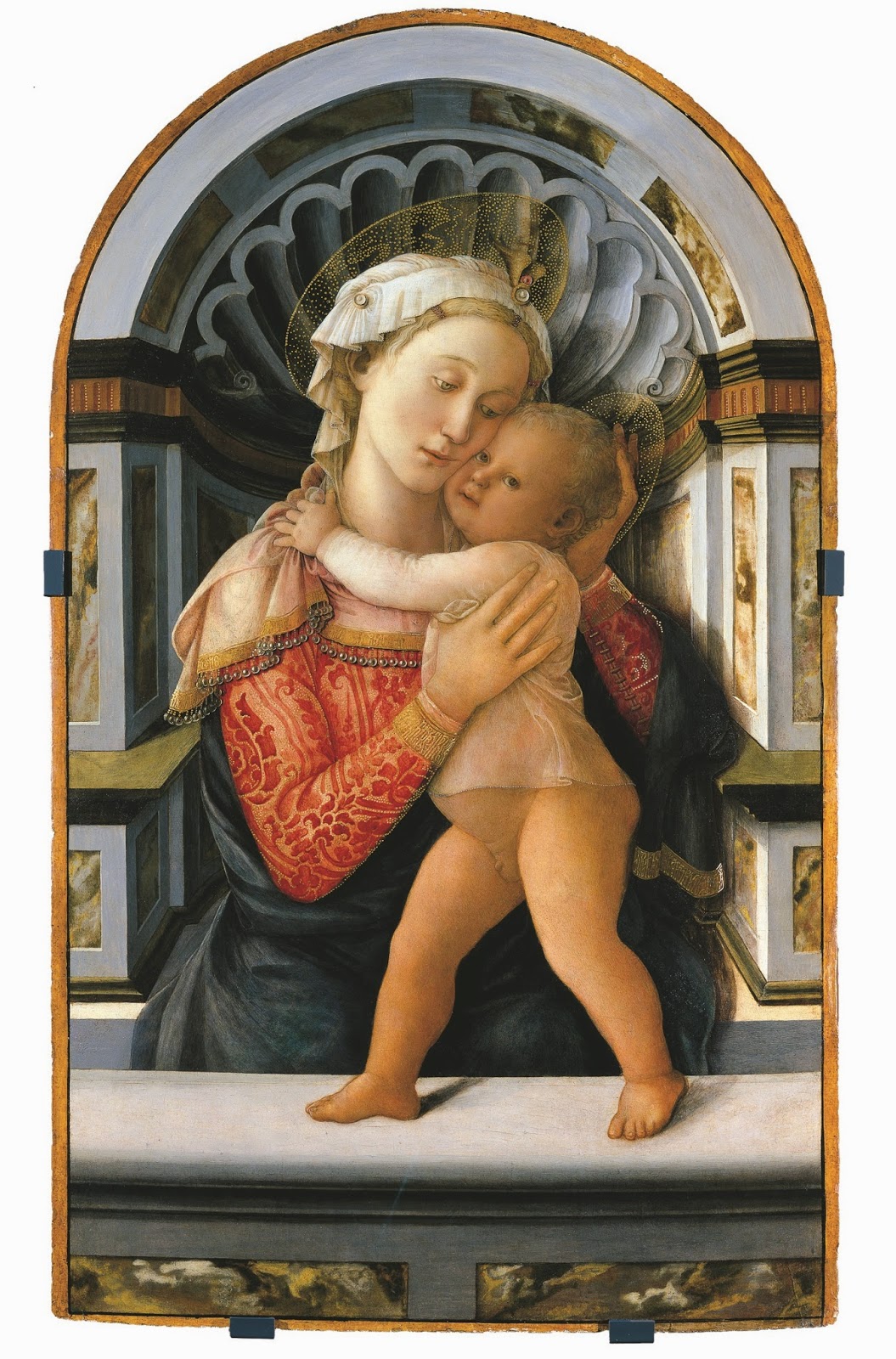 Another distinctive feature in Fra Filippo's Madonnas is the way he portrayed Mary with an idealized, yet sensual, femininity. Earlier Italian painters, even the great Giotto, had presented Mary as a more matronly figure. In Fra Angelico's Madonnas, the ethereal Mary is often hard to tell from the visiting angels. Fra Filippo’s blond, fine-featured young women don't look very Italian or Jewish, but there is a current of sublimated sexuality in his depictions of Mary. Lippi's star pupil, Sandra Botticelli (1445-1510), embraced this vision of Mary with enthusiasm.

In the Botticelli painting on view in the Picturing Mary exhibit, Madonna of the Book, another shared hallmark with Lippi is clearly evident. Both Lippi and Botticelli portray Mary in such a way that her eyes are seldom focused directly on Jesus. It is a demure pose, sanctioned by  Christian theology, to convey a sense of melancholy as Mary contemplates the fate of her son. This is symbolized by the wreath of gilded thorns circling the Christ child's wrist. 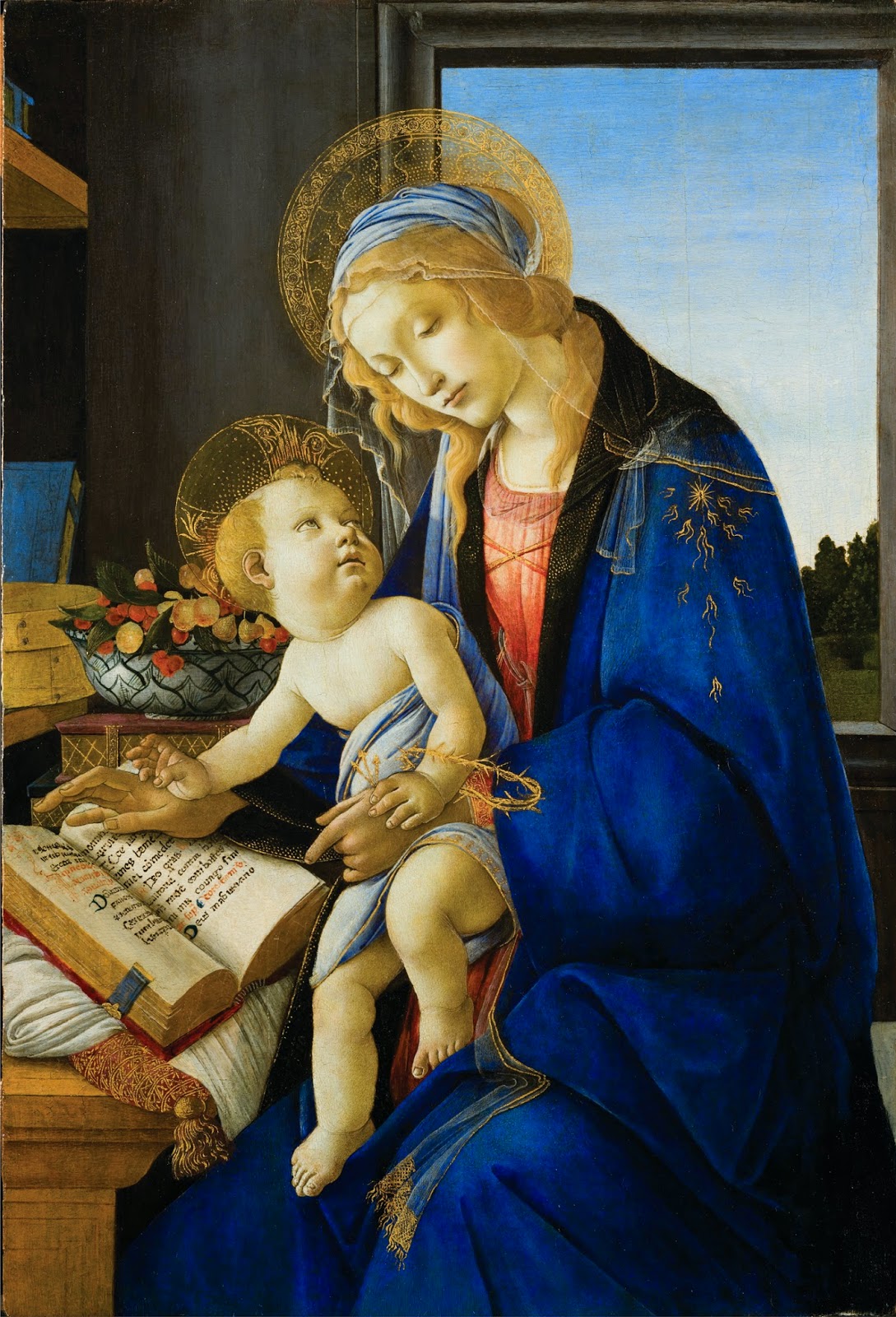 The artistry in the Lippi and Botticelli Madonnas is most impressive. Yet, the spirituality, indeed the humanity, of these works is unconvincing. A real, worried mother gazes with concern upon her child. Mary in these paintings looks away, lost in thought about something - or someone - else.

It is only a short step from Botticelli's Mary to Botticelli's Venus. Both resemble each other very closely. Botticelli is reputed to have modeled the lithe goddesses in Primavera and The Birth of Venus after the reigning beauty of Florence, Simonetta Vespucchi. "La bella Simonetta" died tragically at age 22 in 1476. The obsessed Botticelli is believed to have frequently included her likeness in his paintings. This has been disputed as no documentary evidence has been found to support this popular legend. But I think Botticelli's Madonnas, like those of Lippi, represent a trend toward the secularization of female beauty in Western art and a step away from Christian spirituality.

Botticelli's vision of feminine beauty has achieved almost cult status, from the nineteenth century rediscovery of his paintings to the "super-models" of the contemporary fashion scene. But the Lippi-Botticelli version of Mary never became the dominant mode of Christian iconography. Indeed, no single image of Mary and Jesus by any painter secured a supreme place in the canon of Western art. 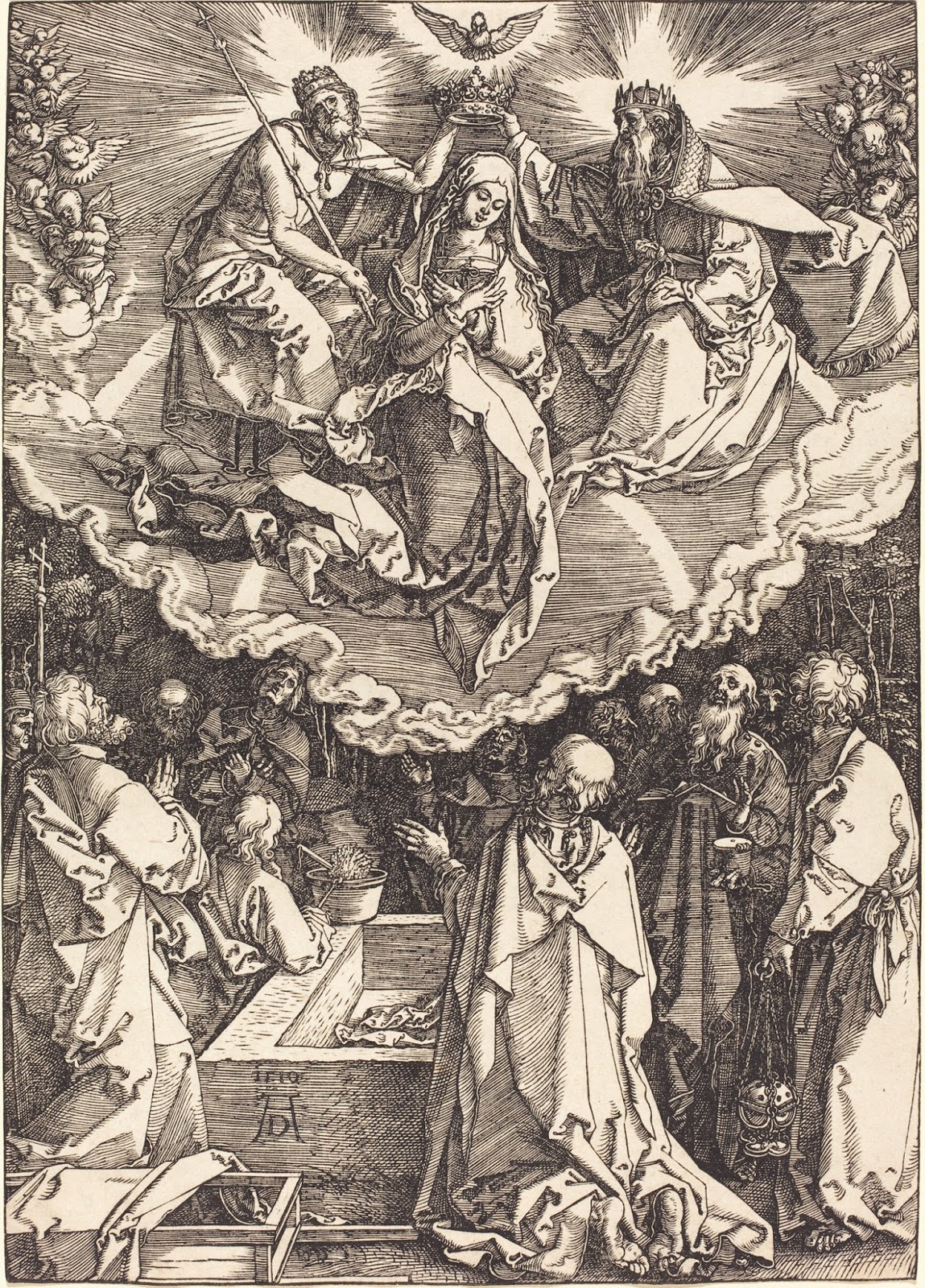 Albrecht Dürer, The Assumption and Coronation of the Virgin, 1510

The exhibition presents the entire range of Marian art from Albrecht Durer’s densely-inhabited vision of Mary’s assumption into heaven to the pleasing naturalism of Artemisia Gentileschi’s  evocation of motherhood in her Madonna and Child, painted in 1609-10. 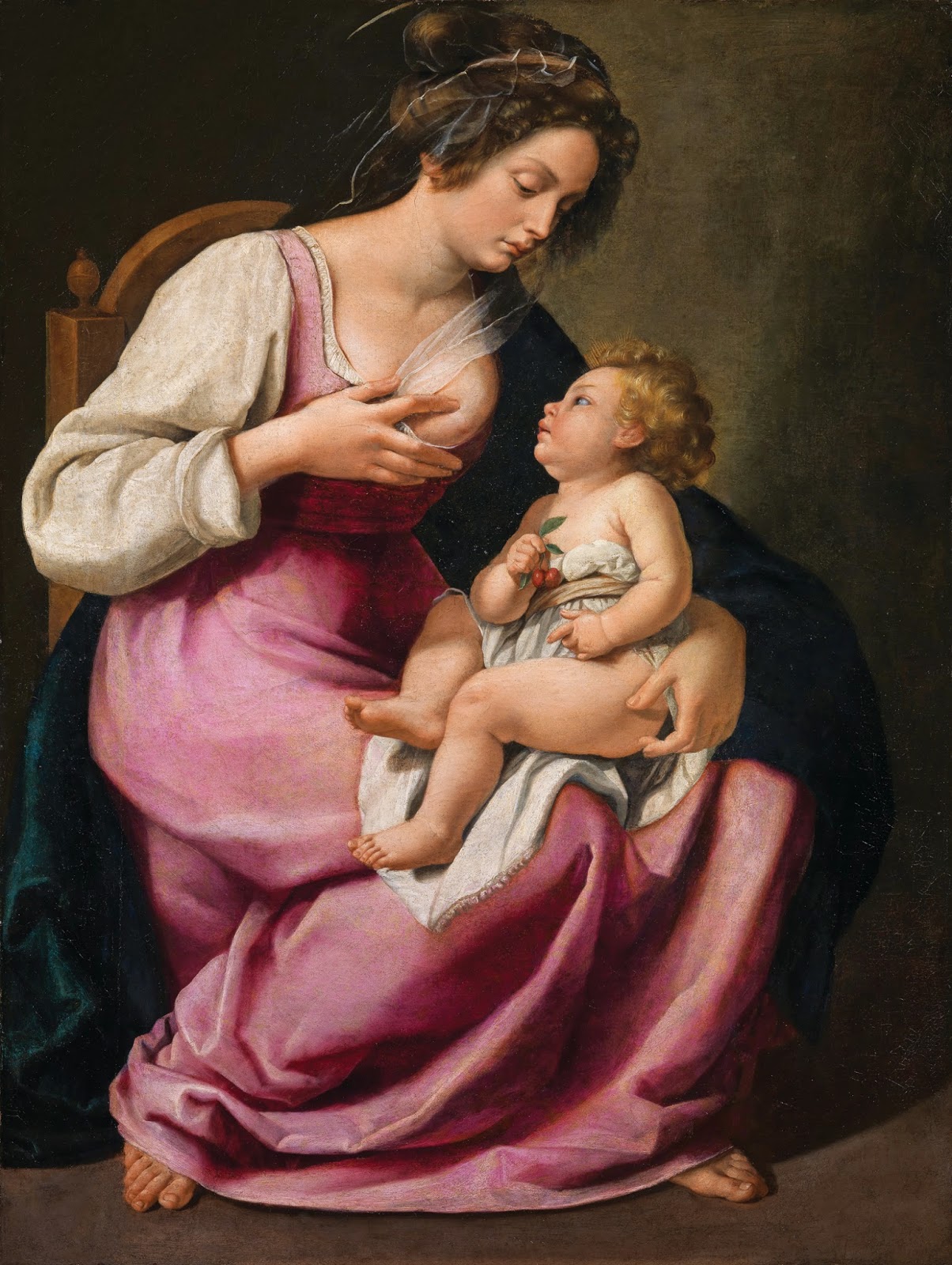 The presence of Gentileschi and other great women artists is essential to this exhibition, presented as it is by the National Museum of Women in the Arts in Washington, D.C. The self-portrait by Sofonisba Anguissola, which serves as the introductory image to this essay, shows that the visual articulation of this great religious theme could never be co-opted by male artists. Even before Gentileschi and Anguissola blazed a trail for women artists to the painter’s easel, other women had made their creative presence felt by depicting Mary on beautifully embroidered church vestments, of which several examples are on display. 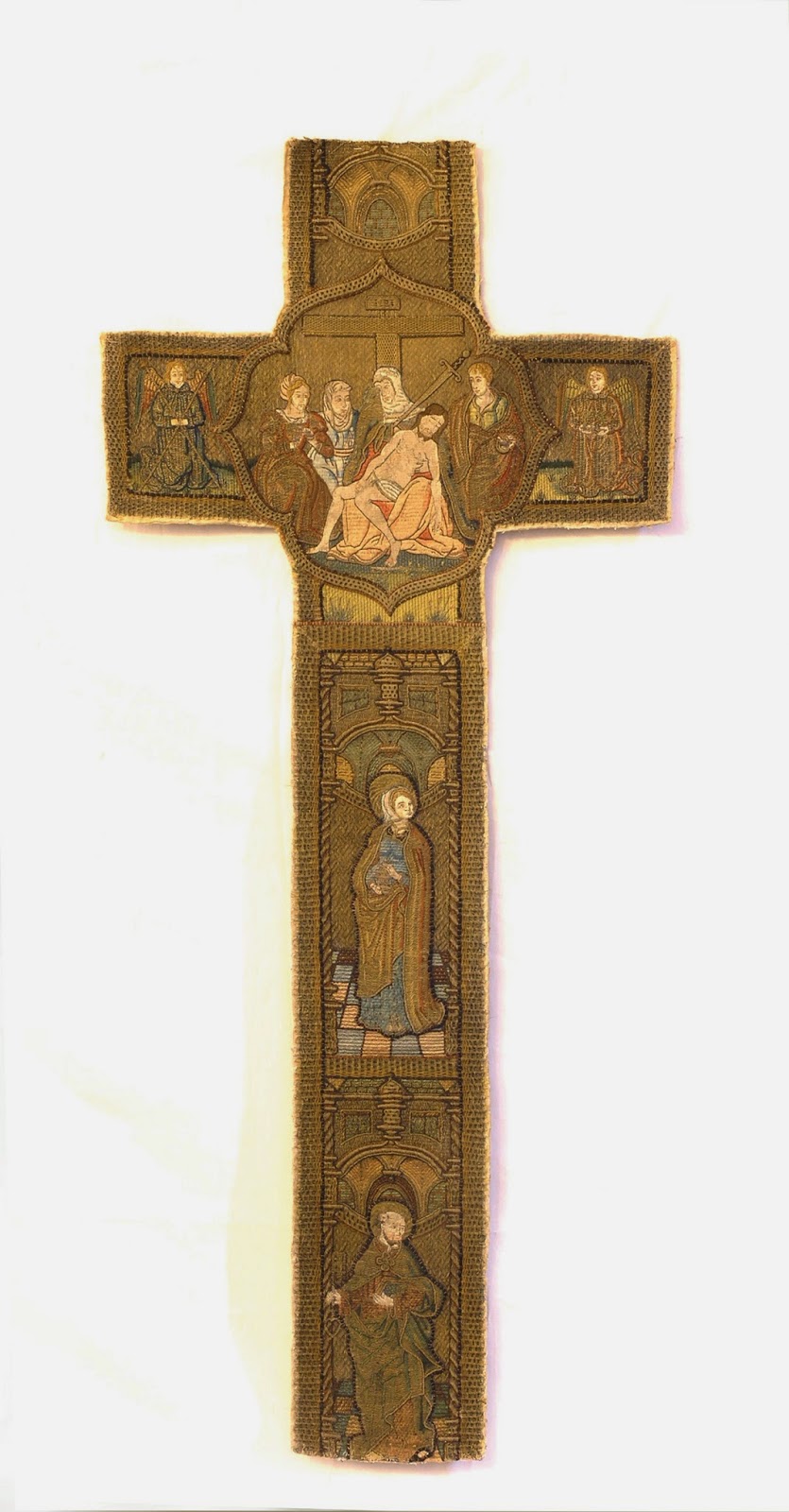 In his personal testament to art, Civilization, Kenneth Clark, wrote, "The great religious art of the world is deeply involved with the female principle."

Art works depicting Mary were absolutely essential in bringing "the female principle" to civilization in the West. Picturing Mary shows that women artists played a key role in creating works of religious art that continue to inspire millions of people.

One of the most moving works on display in Picturing Mary, however, was very much the work of a male artist. This is the glazed terracotta bas relief by Luca della Robbia, Madonna and Child, created around 1450. Robbia (1400-1492) was an accomplished sculptor in marble and bronze before making his key innovation, a tin-based glaze for ceramics. This glaze enabled him to create a durable, marble-like surface for terracotta bas-reliefs and even some three-dimensional statues which were kiln-fired in separate parts and then assembled. 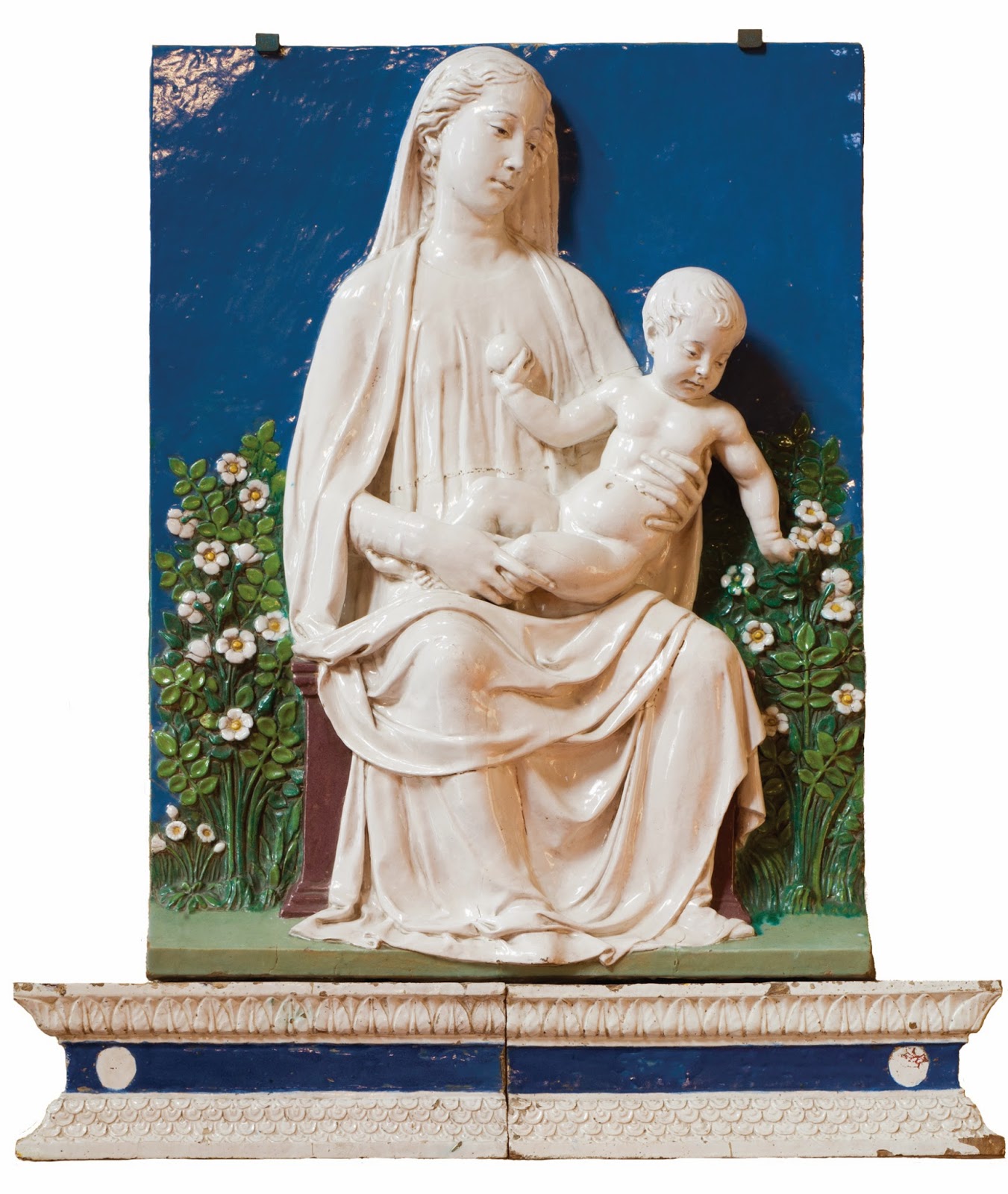 Robbia was a Florentine of the same generation as Lippi. Outwardly, his Madonnas  have the same youthful, demure beauty of Lippi's and Botticelli's. Yet, there is much more of a bond between Mary and Jesus in a Robbia roundel or bas relief. Mary's eyes, more often than not, are fixed upon her child, not lost in a blank, self-absorbed stare.

Ironically, the depth of feeling that Luca della Robbia imparted to his portraits of Mary and Jesus has partly undermined his reputation. Contemporary appraisals of Renaissance art frequently deem the ceramics of the della Robbia workshop as overly-sentimental. In the present age, which sets such a great store on “edge” and self-assertiveness, sentimentality is the short road to artistic oblivion.

There are other standards, however, by which great art should be appraised.

If you gaze for a while upon Robbia’s Madonna and Child and the other beautiful works in the Picturing Mary exhibit, you will understand their essential function. More than that, you will grasp the significance of all great works of religious art, be it a Madonna or a Buddha. These works of art are not created to be “pictures” of holy beings but rather to serve as portals to a deep inner zone called Faith, a realm of higher understanding where seeing really is believing.

Images courtesy of the National Museum of Women in the Arts, Washington D.C.

Email ThisBlogThis!Share to TwitterShare to FacebookShare to Pinterest
Labels: Baroque, Christian Art, National Museum of Women in the Arts, Renaissance, Women in Art