Monet and the Birth of Impressionism 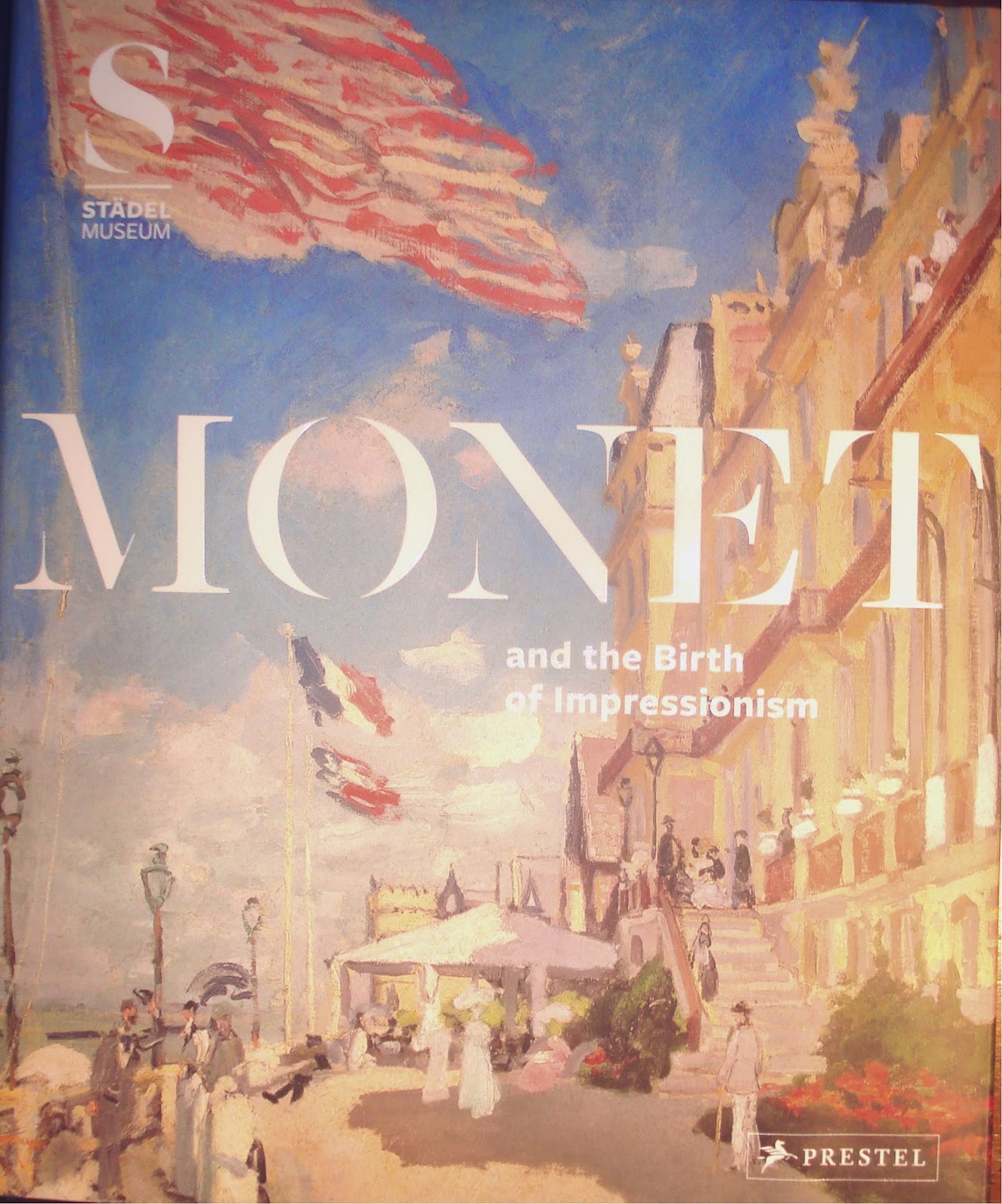 Monet and the Birth of Impressionism

By Felix Krämer and others

Monet and the Birth of Impressionism, the new exhibit at the Städel Museum in Frankfurt am Main, is part of a worldwide reappraisal of the role of the Impressionist painters in the rise of modern art.

Last year, an intriguing exhibition at the Musée Marmottan in Paris focused on Claude Monet's iconic work, Impression, Sunrise, which helped provide the "New Painting" with an unforgettable title. Another major art survey now at the National Gallery in London, later to appear at the Philadelphia Museum of Art, traces the pivotal role of the art dealer, Paul Durand-Ruel, in the triumph of Impressionism.  A retrospective of the fellow member (and patron) of the Impressionists, Gustave Caillebotte, is due at the National Gallery of Art in Washington D.C. in the summer of 2015.

The Monet exhibit at the Städel might well get overlooked, given the number of other Impressionist-themed art shows. Thanks to an outstanding companion volume published by Prestel, that's not likely to happen. 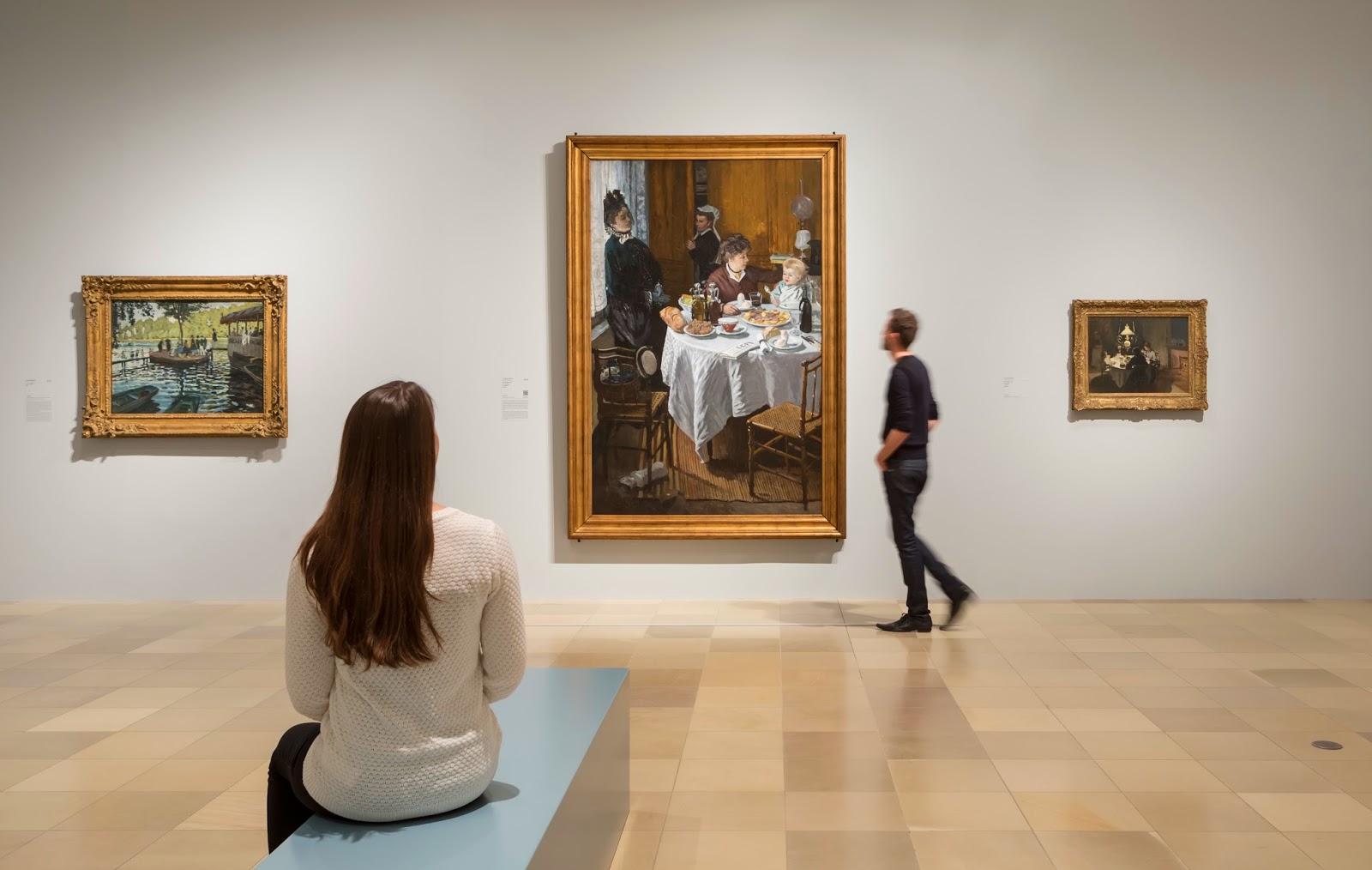 Exhibition view of "Monet and the Birth of Impressionism" Photo: Städel Museum

There is no substitute, of course, for viewing an art work or art exhibition "in the flesh." The curators of the Städel have assembled a particularly impressive array of Impressionist masterpieces. But other museums have mounted great exhibits, as well, the jaw-dropping 2013 Impressionism: Fashion and Modernity at the Metropolitan Museum in New York, being a case in point.

Monet and the Birth of Impressionism makes a major statement (in fact several) on the Impressionist era. It takes works of art which are very familiar and puts them under an interpretive microscope. The results are often unexpected. The chief curator of the exhibition, Felix Krämer, writing about a painting by Monet, The Luncheon, makes a passing comment that could well serve as a verdict for the entire Impressionist epoch.
Questioning conventional interpretations of this imposing early work, Krämer states that "in Monet's Luncheon nothing is what it initially seems." 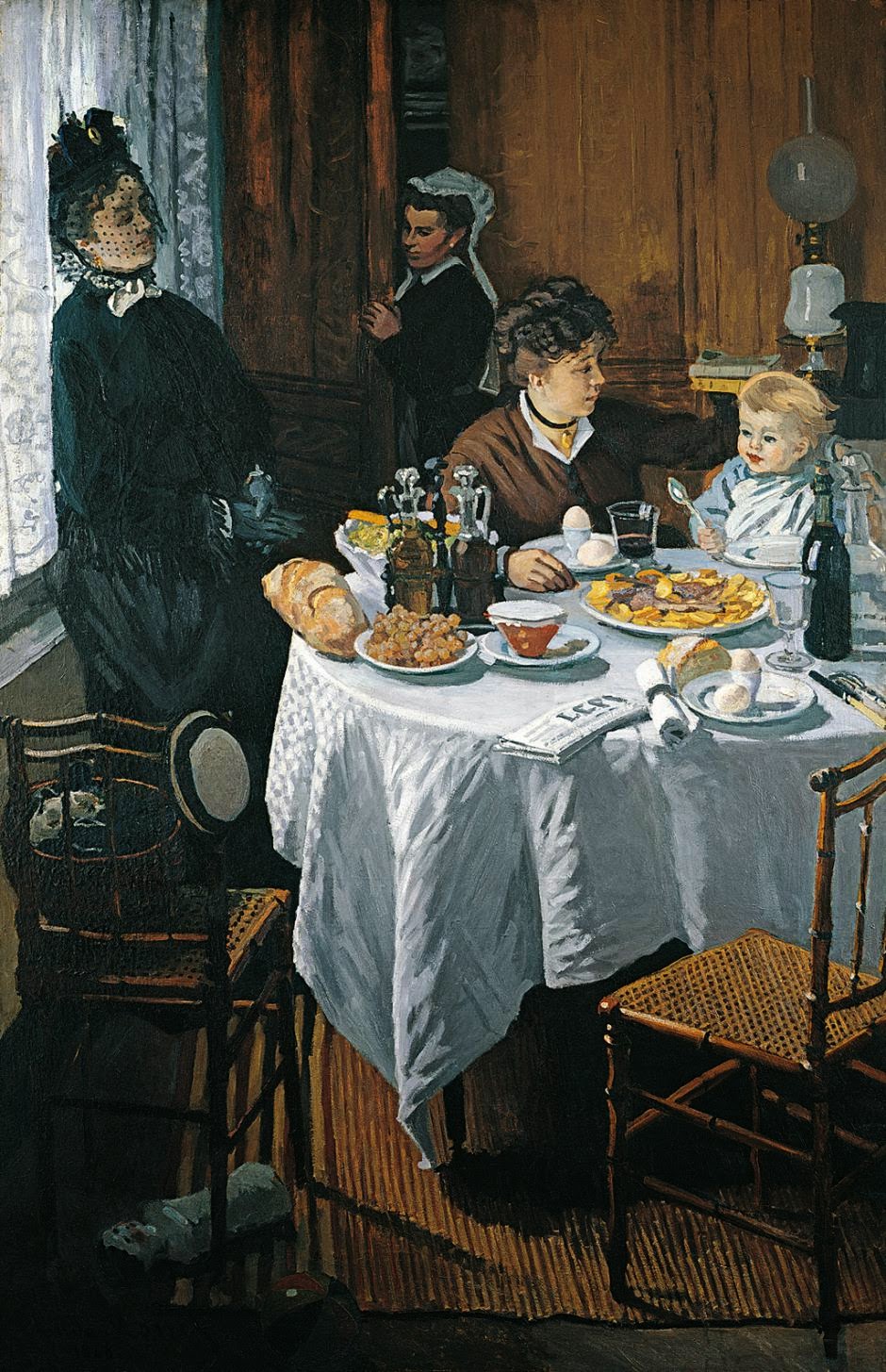 The Luncheon, painted in 1868-69, is a fitting work to begin a consideration of the exhibit and the companion book by Prestel. Monet's painting is deliberately restrained in the color palette he chose, shades of browns and grays, black and the silvery white of the table cloth. In subject matter, Monet took what appears to be a very conservative, prosaic theme - a family meal. Yet "nothing is what it initially seems."

Monet hearkened to Charles Baudelaire's controversial 1863 essay, “The Painter of Modern Life.”  Baudelaire scoffed at the decadent Romans and medieval jongleurs filling the canvases at the annual Paris Salon. Instead, Baudelaire extolled a new kind of artist who would find meaning in the day-to-day reality of life:

He is looking for that indefinable something we may be allowed to call ‘modernity’, for want of a better term to express the idea in question. The aim for him is to extract from fashion the poetry that resides in its historical envelope, to distil the eternal from the transitory.

Monet "extracted" from daily routine a timeless image of family love and harmony. However, even in this celebration of one of the joys of life there are hidden ironies.

Krämer notes that Monet was in desperate financial circumstances when he painted The Luncheon. The setting was a friend's home, where he was staying with Camille Doncieux and their son, Jean, born out-of-wedlock. Camille's left hand, still without a wedding ring, is obscured. She likely posed for the enigmatic woman in black. Monet was too poor to afford paying a model.

Monet delayed exhibiting The Luncheon, after it was completed, because he feared it would be seized by his creditors. In any case, the monumental size of the work was another controversial point. Monet chose a large-scale format that the art establishment deemed suitable for high-minded historical works, not a baby's lunch. In 1870, the Salon rejected The Luncheon along with Monet's evocation of Sunday bathers, rippling water currents and dappled shade, La Grenouillère. 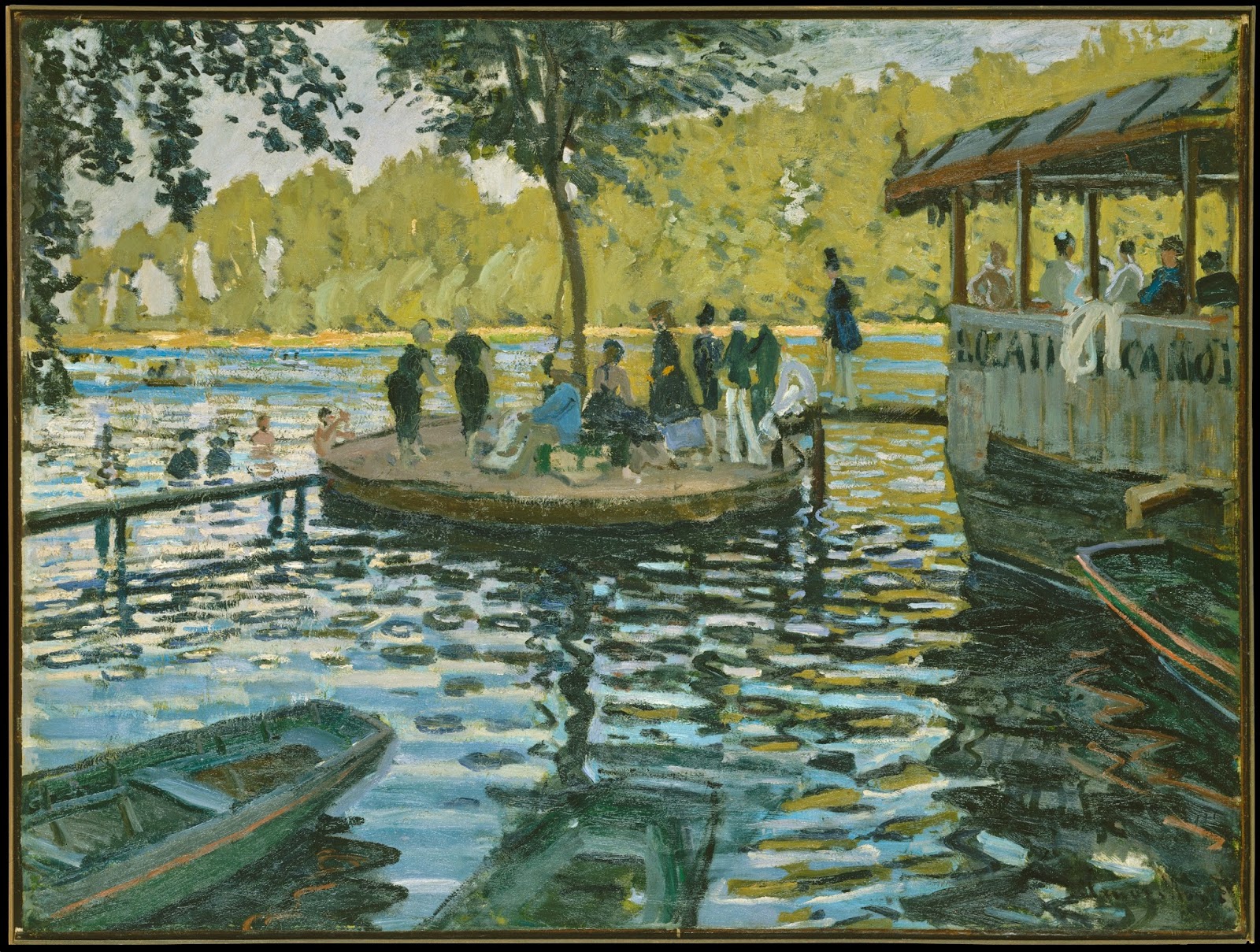 
is well-known, Claude Monet and Auguste Renoir painted versions of the riverside resort, side-by-side. The Städel exhibit displays a smaller rendition of La Grenouillère by Monet. The original was destroyed during World War II. Here is another ironic element in the story of Impressionism. La Grenouillère was painted in 1869, as people sought to escape, if only for a Sunday afternoon swim, the clouds of war gathering over France.

Napoleon III's decadent empire collapsed in 1870 amid smashing military defeats by the Germans and a revolt of the Parisian working class in the aftermath of la Débâcle. 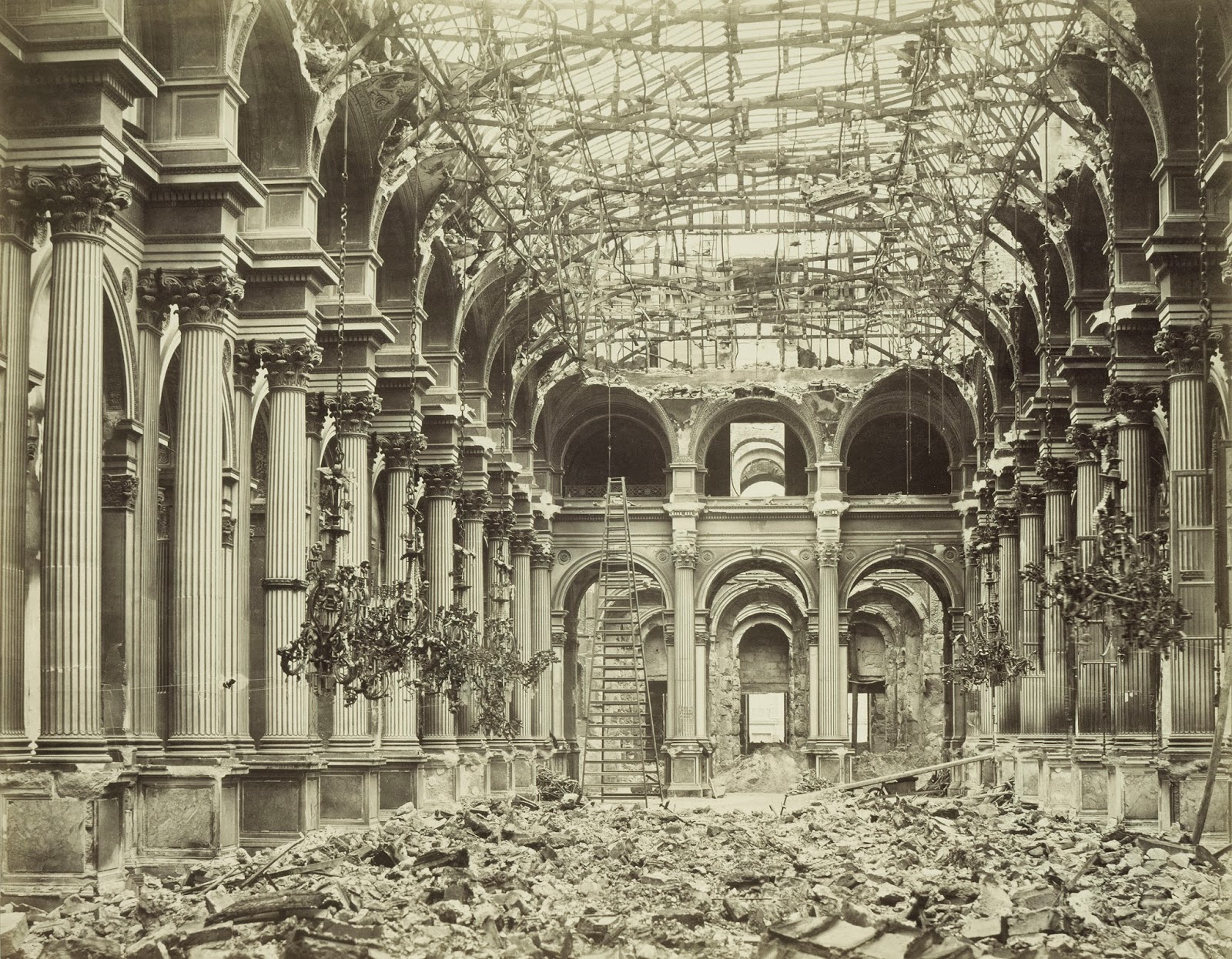 
Impressionism arose not from a weekend jaunt in the country but from corpse-strewn battlefields and the ashes of the Paris Commune. Indeed, the original idea for a special exhibit by the Impressionists was proposed before the war by Monet's friend and fellow painter, Frederic Bazille, who was killed-in-action in November 1870.

Use of the terms Impressionism or Impressionist before the opening of the first exhibition of the "New Painting" in 1874 is another of the "nothing is what it initially seems" elements of the Impressionist story.

According to the endlessly repeated legend of Impressionism's birth, Louis Leroy (1812 - 1885) dubbed Monet, Renoir and the other "Independents" as Impressionists. Leroy, a witty journalist for Le Charivari, coined the term from a pun on the title of Monet's painting Impression, Sunrise. 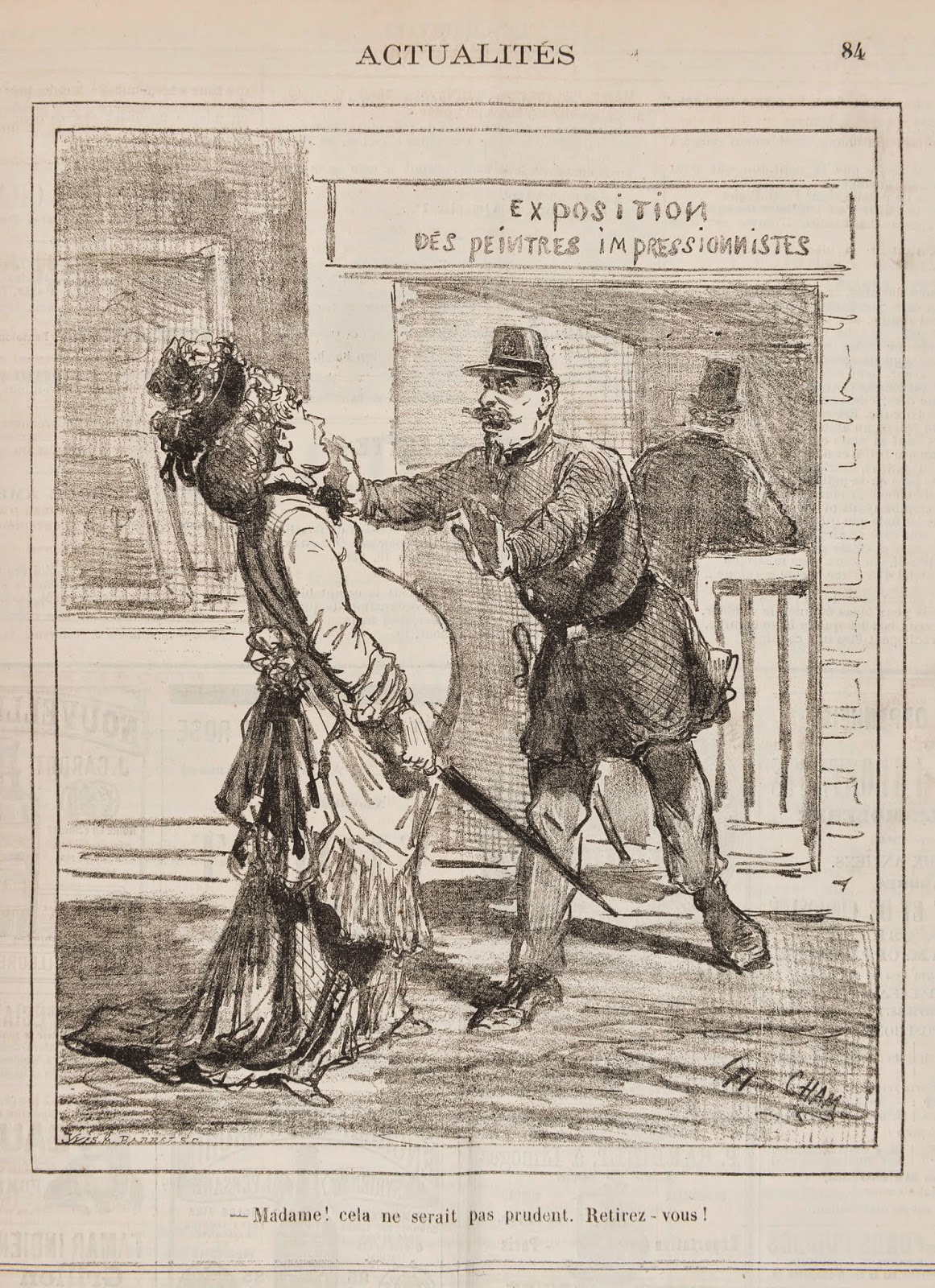 
Leroy's sarcasm certainly provided some notoriety for Monet's group and cartoonists aimed volley after satiric volley at the artists. But Felix Krämer's brilliant analysis demolishes the founding myth of Impressionism which maintains that the first group exhibit in 1874 was an abject failure and that Leroy's bon mot gave the artistic movement its name.

Basing his conclusions on the records of the Paris newspapers and journals who sent correspondents to the 1874 Impressionist Salon, Krämer notes that "out of about 50 reviews, only seven are negative, among them Leroy's satire." Furthermore, the term Impressionist had already been applied to several pioneering landscape painters like Charles Daubigny who had been called "leader of the School of Impression" in 1865.

As a crowning stroke, Krämer notes that most of the media criticism of the 1874 exhibit focused upon including works by conservative, realist painters in the display which were not up to the standard of the "lively, succinct, dashing, simply bewitching" style of the Impressionists.

Impressionism had a very long pedigree reaching back to the Barbizon painters and beyond. The Städel Museum collection has rich holdings from the pre-history of Impressionism. These include works by very fine artists like Antoine Chintreuil (1814-1873), whom I am rather embarrassed to say I had never heard of before. (Chintreuil is not listed in the Oxford Dictionary of Art, either.) 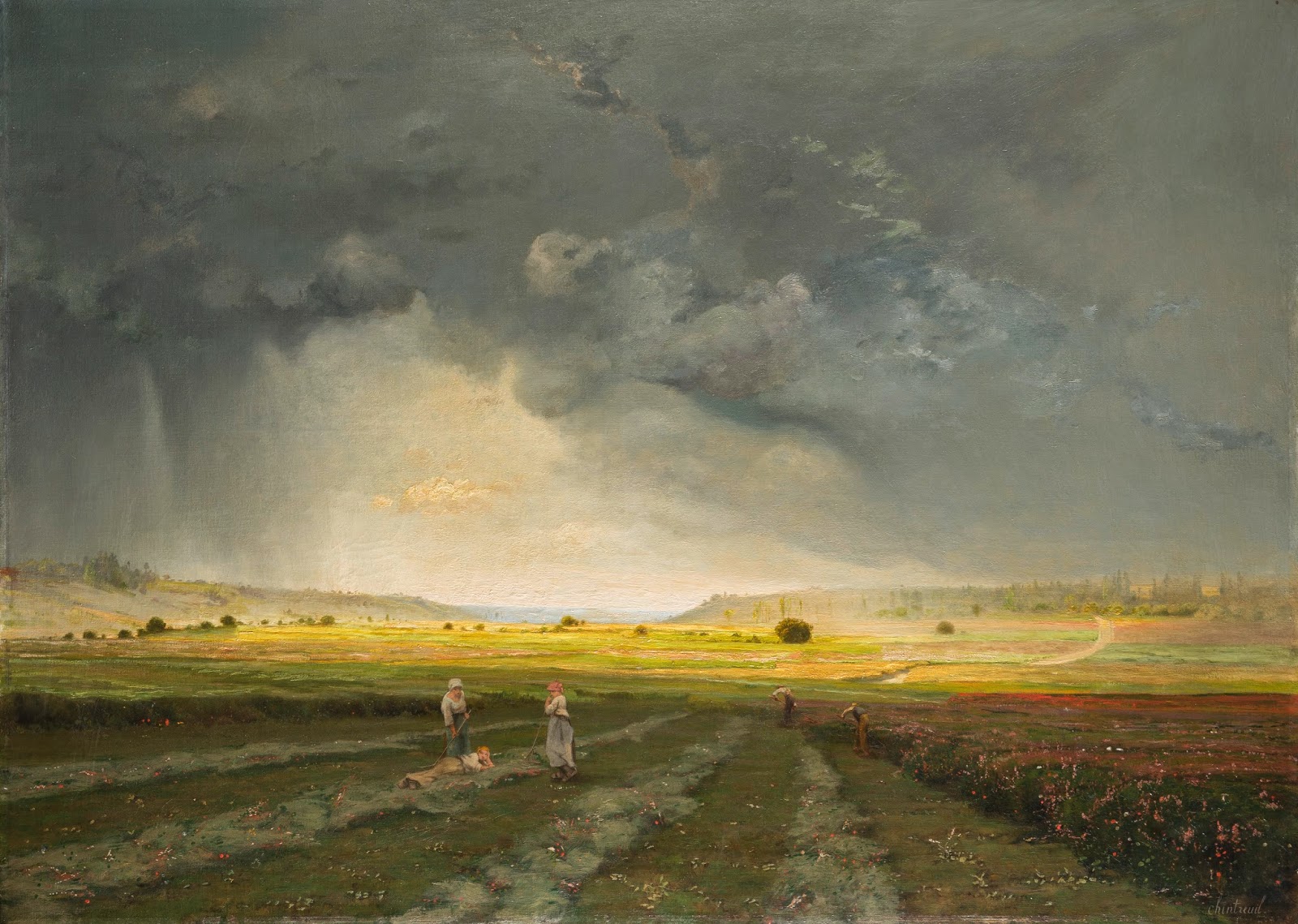 
Chintreuil's The Rain Shower reminds me of Approaching Thunder Storm by Martin Johnson Heade (1819–1904). This great landscape was painted just before the American Civil War and has come to symbolize the threatening political atmosphere leading to that conflict. Heade painted Approaching Thunder Storm based upon a sketch of an actual storm. Chintreuil worked directly from nature too. Perhaps, the rather mystifying group of peasant women - one of whom seems to be staging a sit-down strike - was simply an event he actually witnessed and was not included as an allegorical element. 
Monet painted a similar landscape in 1874, Summer (Meadow at Bezons), with a women relaxing in the field. But there is absolutely no need to wonder about underlying meanings here. By 1874, Monet and most of the Impressionists had completely discarded symbolism, allegory and historical references, all the artistic elements that had been used to justify landscape painting. The young woman in Summer is simply taking a rest.

Before long, Monet almost entirely abandoned including people in his landscapes. Monet's 1873 Luncheon totally marginalized his son, Jean, and wife Camille. Unlike the 1868 Luncheon, they are mere bystanders, literally "in the shade" rather than "center stage." 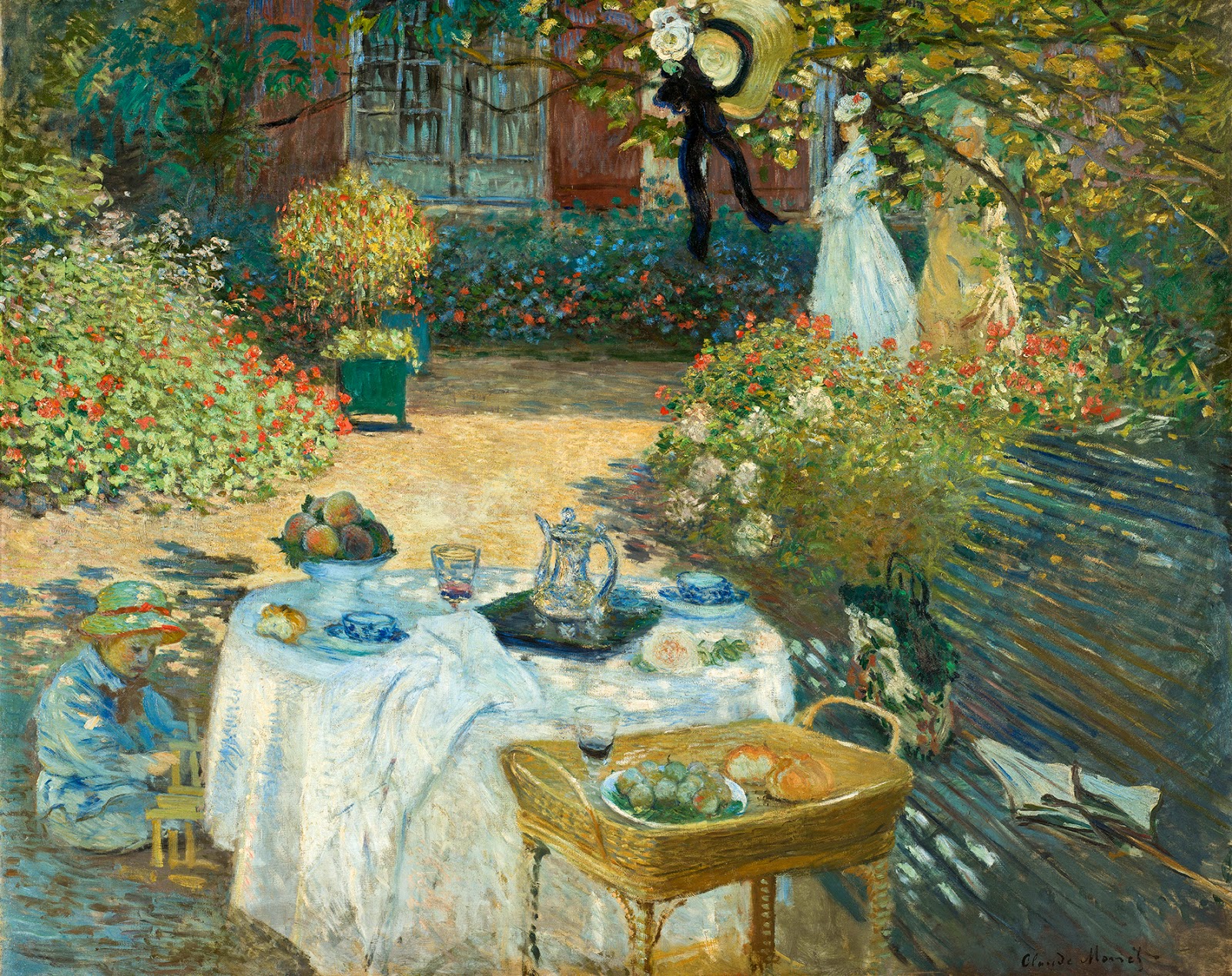 Monet's path to the Eden of Giverny was a road he traveled on before the actual beginning of Impressionism. The Städel exhibit includes one of Monet's earliest landscapes, The Chailly Road through the Forest of Fontainebleau (1865). It shows his growing obsession with the atmosphere of the surrounding landscape at the expense of all else. As Paul Cezanne later declared, "Monet is only an eye, but my God, what an eye!" 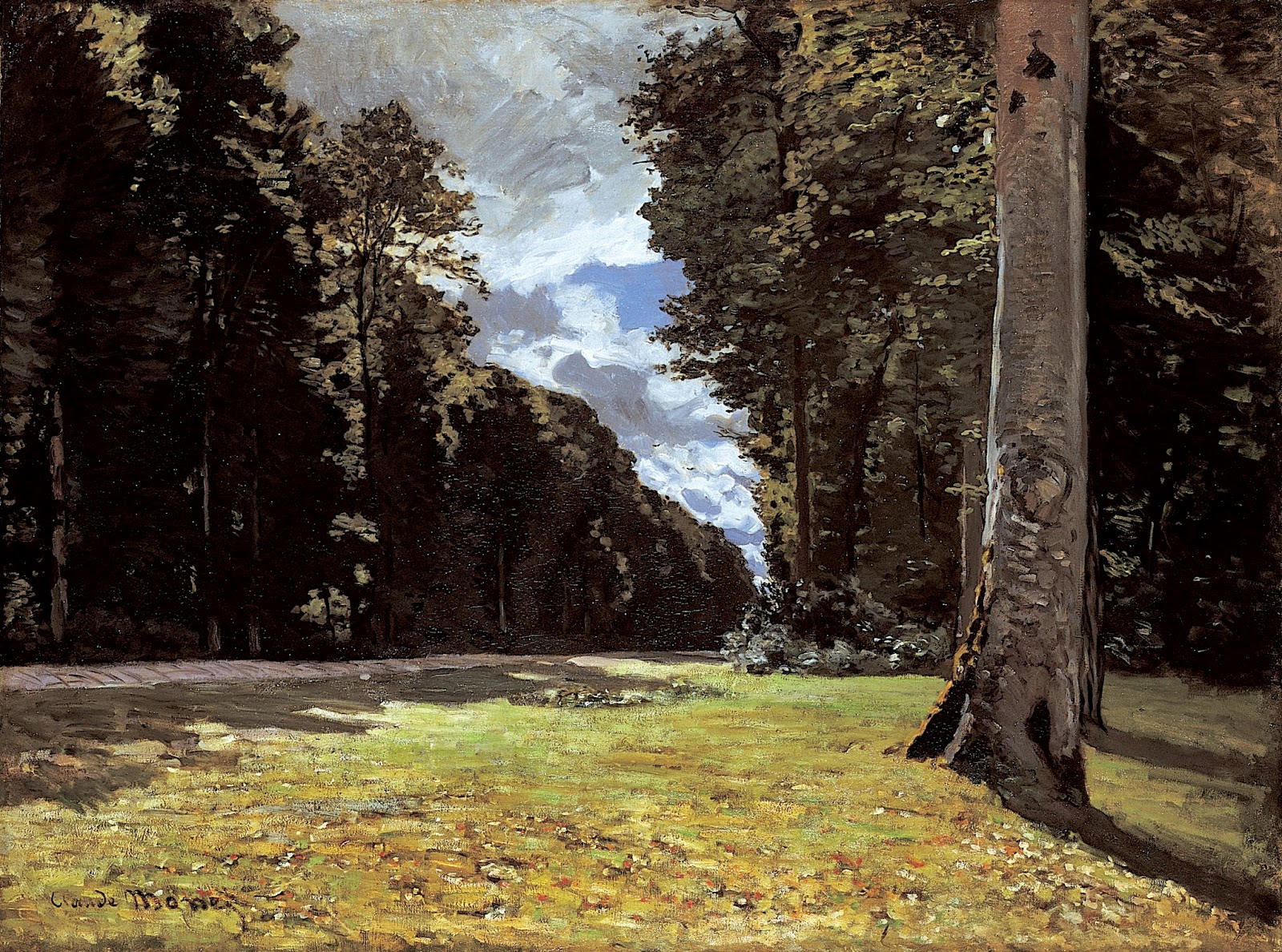 Claude Monet,The Chailly Road through the Forest of Fontainebleau, 1865


Impressionists who continued to depict people in their paintings, such as Edgar Degas and Berthe Morisot, were likewise more concerned with the essence of visual reality.They expended less and less effort on capturing the personal features and details of dress of their subjects. A fascinating essay on Morisot in the Prestel book recounts how she was criticized for her lack of finish. The writer, Ingrid Pfieffer, quotes Morisot, showing her extreme intelligence and grasp of the true nature of art.

"The eternal distinction between drawing and colour is childish," Morisot declared, "since colour is only an expression of form." 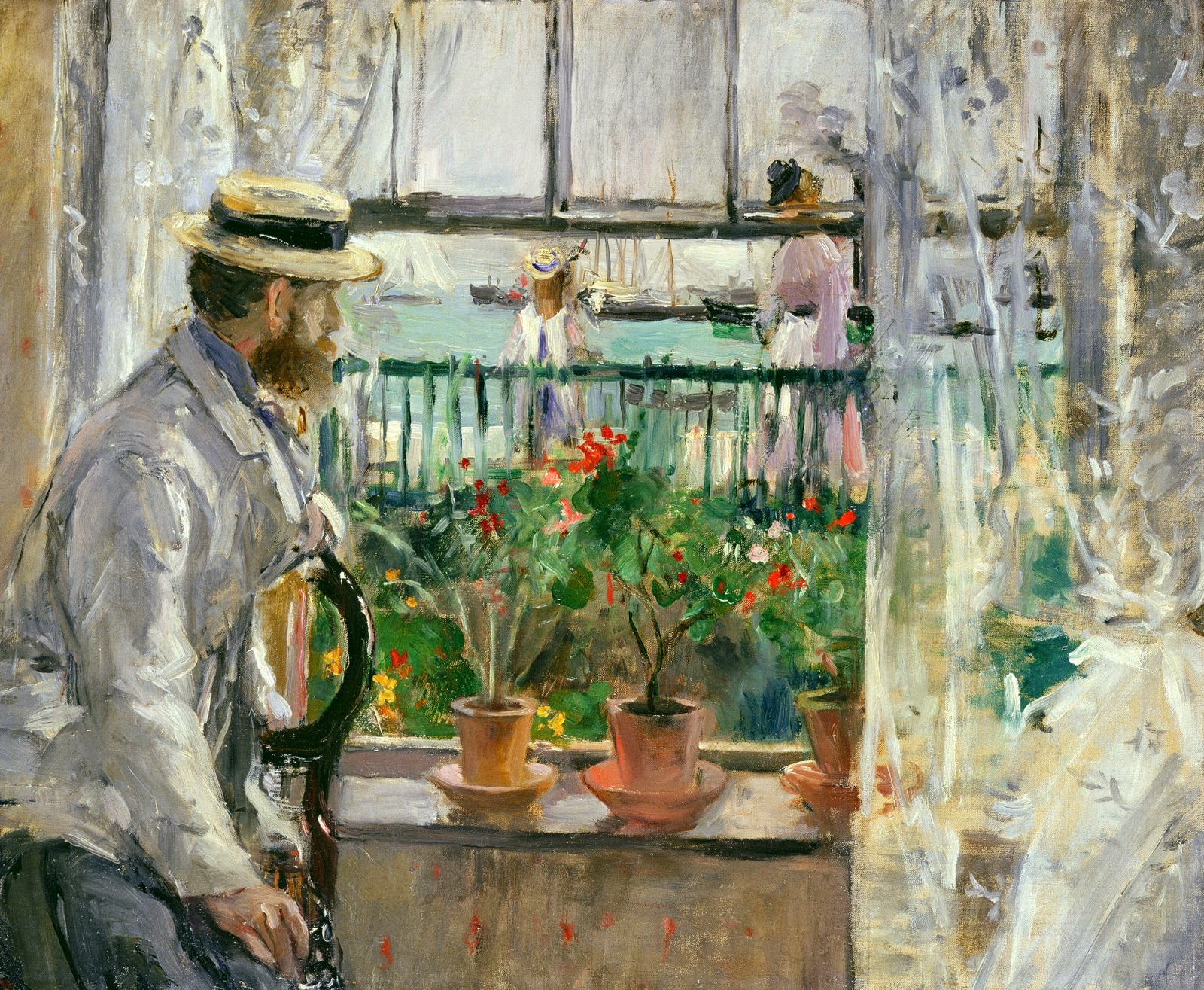 Berthe Morisot,  Eugène Manet on the Isle of Wight,1875


As Impressionism developed, all of the Impressionists focused on representing "this moment." Time itself became the chief subject of their work. In another brilliant essay in the book, André Dombrowski writes that Impressionism's "quick and unfinished touch seems to have provided the modern cultures of speed - exemplified by the velocities of railway travel and telegraphic communication - with their first appropriately modernist form." 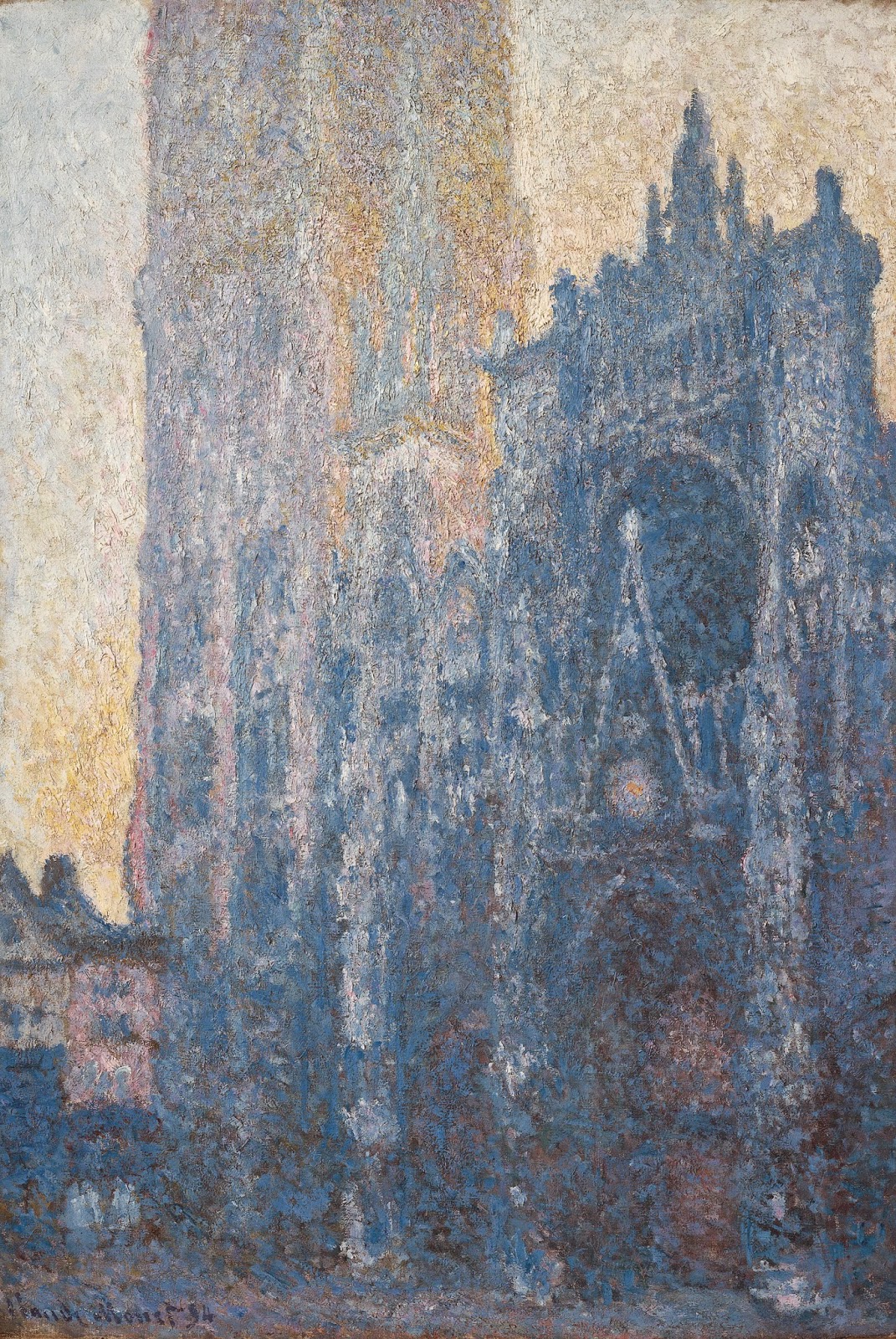 
Impressionism reached its climax during the 1880's. Neo-Impressionism, articulated in Georges Seurat's exacting dot-as-stroke Pointillism was introduced at the last Impressionist Salon in 1886. As Dombrowski notes, these revolutionary artistic movements took place just as the industrialized world assumed its mature form and time itself was standardized to insure that workers everywhere, from factory hands to Impressionist painters, kept to schedule.

Monet and the Birth of Impressionism, both the exhibit at the Städel Museum and the splendid companion volume published by Prestel, provide meaningful insights into the world that Monet, Renoir, Morisot and the rest observed and immortalized on their canvases.

If their era was but a fleeting instant in human history, the Impressionists certainly measured up to Baudelaire's injunction. Live in the present moment and "distill the eternal from the transitory."

Images courtesy of the  Städel Museum, Frankfurt am Main, Germany, the Metropolitan Museum of Art, New York City and Prestel.