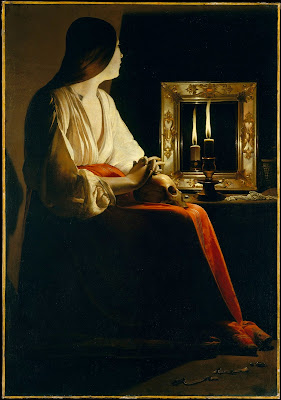 25 Ways to Live in the Moment through Art

There comes a point each time we visit an art museum, when we must move on. We commune with a work of art... then on to the next painting or sculpture. On to the next gallery ... and ultimately out the museum door and on to the next experience.

In Christophe André's splendid new book, Looking at Mindfulness, we find that this museum-going routine replicates that of negtiating the wider realm of life. André counsels us to embrace each moment of life as a precious gift of the cosmos. No matter how long we live - or how many times we may view a work of art - each experience is a unique, never-to-be repeated event. 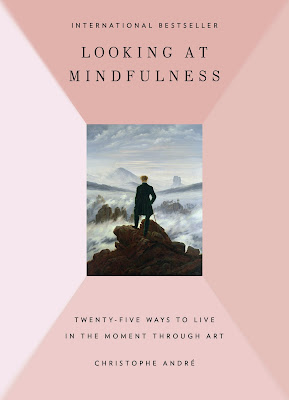 André applies this careful scrutiny to the contemplation  of art. In  Looking at Mindfulness, he  created a "virtual" exhibition featuring twenty-five works of art. These paintings were carefully selected to create a similar effect as the display of religious icons. Just as icons help focus the attention of devout persons to the presence of God, André's picture gallery guides us to the conscious embrace of the present moment.

Among the works chosen by André, some are so familiar as to need no introduction, notably Andrew Wyeth's Christina's World (1948) and Claude Monet's The Magpie (1868). But André always has interesting insights to share about all of these masterpieces. 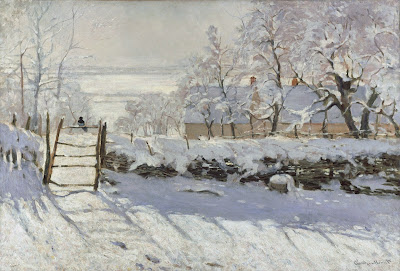 Georges de La Tour's The Penitent Magdalen, the introductory image in this review, serves as a starting point to a discussion of the power of personal reflection. André brilliantly notes that the real reflection in this work is not the mirror image of the candle. Instead, it is the soulful thoughts of Mary Magdalen. This is an evocation of what the great theologian, Teilhard de Chardin, called "the dark night of the soul," the moment of spiritual crisis before the dawn of redemption or enlightenment.

According to André, mindfulness can “radically alter our relationship to the world, ease our suffering and enhance our joys.”

Mindfulness, André stresses, does not come "easy." It is based on diligent, dedicated practice. Mindfulness is also an embrace of life, not a retreat from  its problems. André quotes the great Buddhist master Thich Nhat Hanh, “Meditation is not evasion: it is a serene encounter with reality.”

Much human unhappiness results from grasping after everlasting happiness in its various disguises: power, wealth, social uniformity. Instead, mindfulness helps us live meaningful lives in situations where we are not in control or safe. André's commentary on Hans Holbein's portrait, Sir Thomas More (1527), offers valuable insights on this theme. 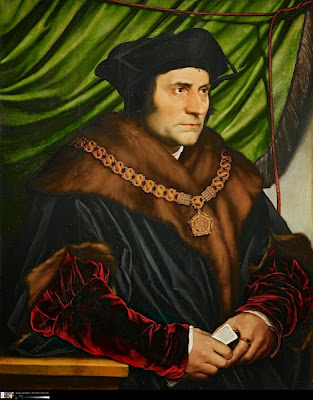 Holbein's portrait of "The Man for All Seasons" is a personal favorite. This great work, one of the masterpieces of the Frick Collection, played a major role in shaping my appreciation for the way that art can depict the "inner person" of an Individual.

I was familiar with color reproductions of Holbein’s Sir Thomas More. Then, in 1983, during one of my first art expeditions to New York City, I received a bit of a shock. The Morgan Library presented a “once in a lifetime” exhibition of Holbein’s portrait sketches of the nobles and church leaders of Henry VIII’s court. Included among these Tudor worthies was Holbein’s drawing of Thomas More upon which the famous portrait was based.

Holbein’s sketches brilliantly captured the effect of Henry VIII’s reign of terror on those around him. Anxiety, fear, duplicity and ambition were etched into the faces of King Henry’s courtiers. Thomas More was no exception. To my surprise, More’s countenance in the Holbein sketch was marked by a degree of tension and combativeness that does not appear in the formal portrait. 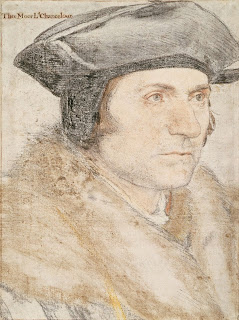 The discrepancy between Holbein’s draft and finished work was a revelation to me – and still is. I saw the portrait in the Frick collection a short time after the Morgan exhibition and every time I visit the Frick I spend some time with this remarkable work. I have come to believe that the finished portrait does not mask the inner uncertainties evident in the sketch. Rather, the portrait documents the emotional and spiritual growth of Thomas More. Holbein's painting evokes More's fortitude, courage and his religious faith as he watched the world of Christian Europe collapse around him during the Reformation.

André emphasizes another of Sir Thomas More’s personal attributes: his intelligence. More understood that he could not impose his own will on the deteriorating situation, despite his position as Lord Chancellor. He knew what was feasible and what was not. Being intelligent, Andre writes, starts ”by observing what is, rather than trying from the outset to impose our presence on reality.”

In a treacherous world, More refused to scheme or plot against Henry VIII. He famously refused to take the Oath of Supremacy making Henry VIII the Supreme Head of the Church of England. But he remained a loyal Englishman even when he was executed in 1535 on a fabricated charge of treason. More performed the inspiring feat of remaining true to his conscience and to the ideals of his country.

More put into practice what John Keats later called “Negative Capability, that is, when a man is capable of being in uncertainties, mysteries, doubts, without any irritable reaching after fact and reason.”

Negative Capability means that we can control ourselves when the world around us is out of control. This seeming contradiction provides the key to André’s analysis of an unsettling work of art, Fra Angelico’s fresco painting, Christ Mocked in the Presence of the Virgin and Saint Dominic. 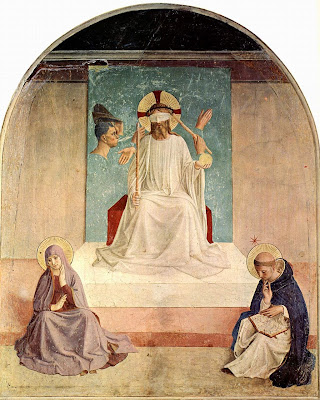 Fra Angelico, Christ Mocked in the Presence of the Virgin and Saint Dominic,1438

Fra Angelico painted scenes from the life of Christ in the monk's rooms at the Convento di San Marco in Florence.  These paintings impose a living presence in the small rooms or cells of the monks. Christ Mocked in the Presence of the Virgin and Saint Dominic is the height of a tall man. But its size (6.13 x 4.95 ft or  187 by 151 cm) is not what leaves an indelible imprint on our minds.

Christ Mocked in the Presence of the Virgin and Saint Dominic is a masterpiece of surrealism painted exactly five centuries before André Breton mounted the International Surrealist Exhibition in 1938. 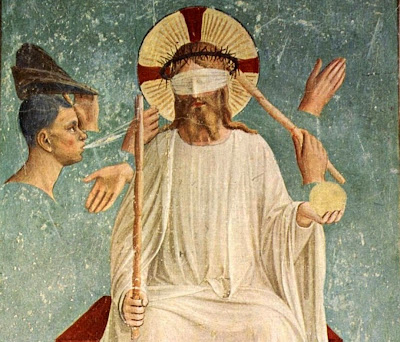 In this disturbing work, Jesus is assaulted by the disembodied hands of his persecutors. Except for the head of one spitting assailant, who tips a "Robin Hood" style cap in a gesture derisive deference, we see nothing except hands raining-down blows, pressing a crown of thorns on Christ's head.

Jesus sits upon a throne, holding a wooden staff and an orb, as if he were a king. Fra Angelico, however, asserts that he is in fact Christ the King. In a brilliant touch, Fra Angelico makes the blindfold a thin band of cotton gauze. Christ is not blinded but can see all. He is a model of kingly deportment, of grace under pressure ... of living in negative capability.

André makes a telling point by reminding us that acting in the spirit of negative capability is within the power of mere mortals as well as saints and redeemers. He reminds us of the experience of Viktor Frankl while a prisoner of the Nazis in Dachau. One day, a fellow prisoner roused Frankl and others in his hut to go out to the assembly grounds to see a “wonderful sunset.”  They responded and at that moment they asserted their humanity in a way the Nazis could not control.  By choosing to regard beauty in a environment of death and enslavement, Frankl and the other prisoners became more fully alive and more free than the Nazi camp guards.

Living in Mindfulness is not primarily oriented toward religious themes or living in mindfulness during particularly horrific situations like the Holocaust. Mindfulness is for living in the present moment. Certainly, the "daily grind" of twenty-first century life throws a host of threats our way. The relentless stream of TV ads, radio talk-show chatter, telephone calls and emails  threatens our emotional well-being as much as "Big Brother" propaganda broadcasts. André writes:

Mindfulness helps us to become aware of all this hidden pollution of our minds, and protect ourselves against it. It enables us to restore our capacity for introspection and reconnect with ourselves, rather than sustaining ourselves with a constant drip-feed of external orders, distractions and activations.

And then there is life itself that calls upon us to live mindfully, to act with  negative capability. André  illustrates the undeniable fact of  mortality and  human fraility with wonderful paintings by two very dissimilar artists, J.M.W. Turner and Antoine Watteau. 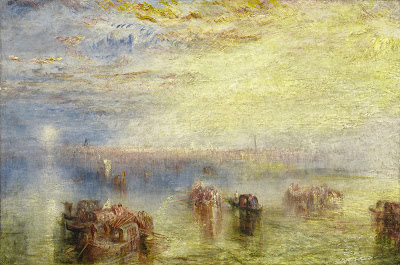 Turner's Approach to Venice shows the slowing dying, steadily-sinking city of Venice in all its radiant beauty. The sun is setting, the moon rising, with life and love flourishing - even as the Adriatic Sea rises a little higher each day. At some point. Venice will sink but that time is not THIS MOMENT.

Living with Mindfulness is a book about life appreciation more than art appreciation. It asserts the value of each human life and of living as our "self" here and now. But, as André also convincingly demonstrates, "picture study"  is indispensable to the Oracle of Delphi's  counsel to "know thyself." 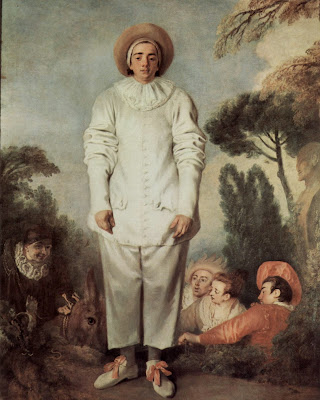 Look at Antoine Watteau's pathetic, lovable clown, Pierrot. His pants are too short and his sleeves too long. Nobody is paying any attention to him. Pierrot is a bundle of insecurities, faults, failings - and unexpected strengths too. He has the capability of living in this moment.

Have you seen this fellow lately?