Ink and Gold: Art of the Kano at the Philadelphia Museum of Art 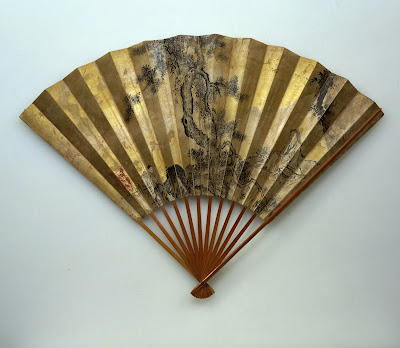 Ink and Gold: Art of the Kano


Ink and Gold, the magnificent exhibition of the Kano school of Japanese art at the Philadelphia Museum of Art is entering its final week. Shortly before it opened to the public, back in February, I saw the exhibition in the first of its three rotations. Kano paintings are such precious and fragile art works that they could not be displayed for the entire duration of the exhibit.

Recently, I made a return visit and was as astonished at the scale and beauty of the Kano works as I was the first time - perhaps more so.

The Kano school was a hereditary succession of artists, many of whom were actually linked by blood ties. Kano art works, many of them wall-sized landscapes, were painted on silk with ink, as in classic Chinese art. Color pigments were increasingly used as the Kano artists emphasized Japanese themes and settings. Shimmering backgrounds of gold leaf completed these works which adorned the palaces and castles of the ruling elite of Japan. 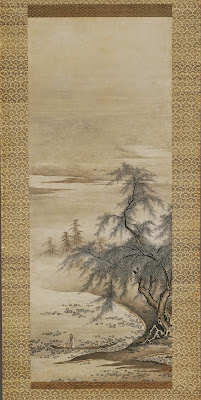 Over the course of four centuries, the Kano school created a distinctive artistic technique and a vision to match.  These artists painted a sage meditating beneath a pine tree on a lady's fan with the same seamless perfection as an episode from The Tale of Genji ranging across a wall screen.

Despite the singular nature of the  works on view in the Ink and Gold exhibit, I initially found the Kano paintings hard to comprehend. There are a number of reasons for this. The primary one was that I found it difficult to accept that the beauty of the Kano paintings served to gild the brutal, if artfully disguised, power of the Tokugawa Shogunate that dominated Japan from 1615 to 1868.

Also, the extravagant use of gold leaf for the background of the Kano paintings clashed with Western tradition. Gold leaf was used in Europe during the Middles Ages and the early Renaissance to create a heavenly or spiritual atmosphere for religious paintings. Kano paintings were commissioned, for the most part, as secular works of art.

By stepping back for some reflective observation of the "whole" and the "parts" of the Kano paintings, I eventually came a bit closer to understanding the Kano school of art. Fortunately, the curators at the Philadelphia Museum of Art have provided insightful commentary to guide my rather fumbling efforts.

The first way to understand the role of the Kano artists is to remember that Japan during this period was a "locked country" or Sakoku. Almost all contact with the outside world was forbidden. No Japanese citizen could travel abroad and contact with the West was limited to a single Dutch commercial legation in Nagasaki.

Ideas and cultural influences from beyond Japan could be appreciated to some extent but only if viewed through the constricted world view imposed by the Shogunate. The shoguns were determined to maintain Chinese artistic motifs and Zen Buddhist religious concepts. In doing so, the shoguns asserted their cultural sophistication. As patrons of the Kano art school, the Shogunate leaders acted in much the same way as the "Robber Barons" of post-Civil War America who bought vast collections of Old Master art from Europe to deflect criticism of their dubious business practices. The iron hands of both elites were masked by very elegant gloves.

The creativity of the Kano artists, however, enabled them to evade the constraints imposed by the Tokugawa Shogunate. By comparing two of the signature works from the Ink and Gold exhibition, we can see how the Kano artists embraced the whole world even though they were denied travel visas.

Tigers in a Bamboo Grove shows two tiger cubs in a playful tussle. They are safeguarded by their mother, who observes them from a bamboo thicket. If we look closely at the young cub in this detail, the stylized representation of the tiger is immediately apparent. And it is vitally important to Kano art to understand why. 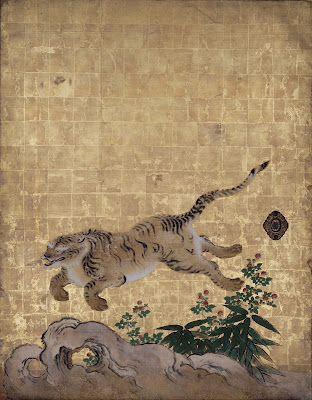 Tigers, as well as house cats, are not indigenous to Japan. The Japanese certainly knew what real tigers looked like by 1600, as Samurai warriors hunted tigers in Korea during the ill-fated military campaigns of the 1590's.

Kano artists depicted a different tiger altogether. The Kano tiger was a spiritual animal, symbolizing earthly wisdom. Tigers represented the West in Zen philosophy and were often shown accompanying Buddhist sages. In much the same way, Renaissance artists in Italy placed a lion in the library or desert refuge of the Christian saint, Jerome.

The bamboo grove (not shown in this detail) represented resilience and integrity. It was viewed as the abode of tigers, the only animals able to find their way through the thicket. The young tigers in this Kano painting can thus be seen as symbolical of the human preparation to live noble, enlightened lives. 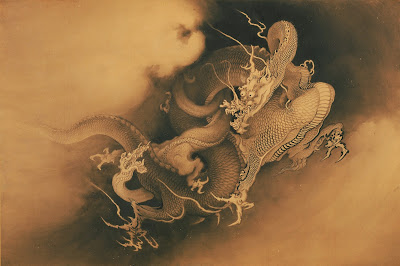 Two Dragons, painted  by Kano Hogai in 1885, hearkens back to the ancient tradition in Asia where dragons are powerful, yet benevolent, creatures. Dragons represented yang, the masculine attributes of heat, light, and action. In Japanese Zen-Buddhist art, dragons took on an additional symbolical status, as the Philadelphia Museum of Art curators explain. The dragon represented the "the soaring spirit of the freed satoric (or suddenly enlightened) soul."

These celestial qualities made dragons the perfect counterpart to tigers who were "associated with the earthbound enlightened mind."

Tigers and dragons were often depicted together in Kano paintings, sometimes glowering at each other. In Kano art, these two creatures signified the wisdom and spirituality of a community living in harmony. Likewise, since dragons represented the East and tigers the West, a sense of cosmic unity is implicit in Kano art, at a time when Japan was cut-off from the rest of the world.

Birds and Flowers of the Four Seasons, late 16th to early 17th century

The artistic vision of the Kano artists was also manifested in naturalistic depictions of their surroundings. Eagle and Pine Tree by  Kano Tan’yu, and Birds and Flowers of the Four Seasons by an unnamed Kano artist prove that creative spirits will find beauty at close hand even if they are prevented from observing the world at large. Repressive governments cannot long suppress the instinct for beauty any more than they can crush the desire for liberty.

However, there is no disguising the fact that the Kano artists needed the patronage of the Shogunate to survive economically. When the shogun’s grasp on Japanese society was shaken loose, the privileged position of the Kano school was lost as well. The Meiji Restoration of 1868 returned control of Japan to the emperor and the central government. The ensuing modernization program left little room for gold-leafed depictions of Old Japan. This in turn led to a final, fitting  irony.

The last admirers and patrons of Kano art were the very Westerners, Europeans and Americans, whose industrial society was being copied and adapted by the Meiji regime. The Philadelphia Museum of Art has particularly rich holdings of Kano art because Ernest F. Fenollosa (1853-1908), an American professor at the Imperial University in Tokyo, became a passionate collector and advocate of Kano art. His collection was later bequeathed to the Philadelphia Museum of Art by his daughter.

And finally, it is fitting to conclude this post with a grateful acknowledgement of the work of Felice Fischer, the Philadelphia Museum’s internationally renowned curator of Japanese and East Asian Art. It is thanks to her vision and efforts that these Kano works of art were able to make the journey to the United States.

Ink and Gold is an exhibition that won’t be seen again for some time.  Or at least not on the breathtaking scale of the present display at the Philadelphia Museum of Art. It is safe to say, however, that the spectacular works of the Kano school of art will now be recognized as masterpieces of world art, not only treasures from the “land of the rising sun.”

Images courtesy of the Philadelphia  Museum of Art.

Posted by Art Eyewitness at 6:23 AM