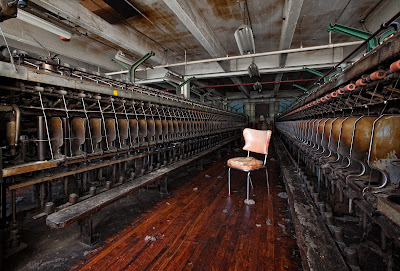 Abandoned America: the Age of Consequences

In 1927, the Ford Motor Company commissioned an artist from Philadelphia, Charles Sheeler, to photograph Ford's River Rouge plant. Covering eleven hundred acres and employing a staggering 75,000 workers, River Rouge was the world's biggest, most technologically- advanced industrial facility. The epicenter of the production of Ford's new Model A automobile, River Rouge could only be described in images not words.

Sheeler spent six weeks at the Michigan factory site but only made 32 prints. This handful of photographs, however, provided a sensational visualization of industrial age civilization. Pictures like Criss-Crossed Conveyors, Ford Plant presented a world where factories had become - in Sheeler's words - “our substitute for religious expression." 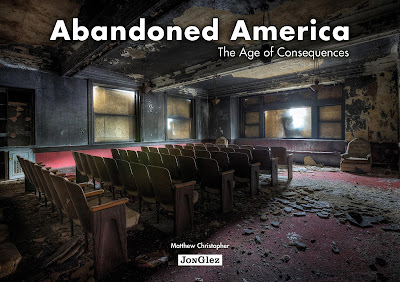 Flash-forward from Sheeler's era to Matthew Christopher's contemporary photographs in the new book, Abandoned America. Here you will see what became of the temples of twentieth century "religious expression."

Matthew Christopher is a Philadelphia artist like Sheeler. Over the last decade, Christopher has explored dozens of sites dating from America's Industrial Age. He has photographed factories, power-stations, churches, hotels, hospitals and prisons from the proud Progressive Era. When built, these structures were  statements of faith in an American future where science, religion and culture were intertwined like the wire strands of the steel-cables supporting the Brooklyn Bridge.

Everyone of these buildings is now closed, bolted-shut or demolished. The derelict, rusting ruins of Carrie Furnaces, the windowless facade of Packard Motor Car Company, the "bare, ruined choirs" of Gothic Revival churches in Philadelphia facing the wrecking-ball - these are sign-posts of America's "post-industrial" present. 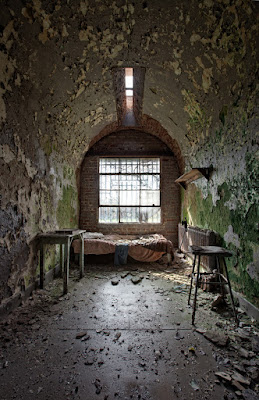 To his credit, Christopher does not fall into the trap of "good old days" nostalgia. His well-researched commentary presents the grim history of such places as Holmesburg Prison in Philadelphia, nicknamed  the "Terrordome." When paired with his terse accounts of medical experimentation on prisoners and other atrocities at Holmesburg, the sinister beauty of Christopher's prison photos is hard to banish from one's mind.

Christopher's book asserts that we should not be quick to turn the page of history. It is clear from his photos and his reportage that America is not necessarily a better place as a result of closing-down hell-holes like Holmesburg. Rather, Abandoned America, powerfully - and painfully - documents what Christopher calls the "Age of Consequences."

The first "consequence" which Christopher examines is the collapse of America's heavy industry during the last three decades of the twentieth century. Photo essays treat the demise of the Eastalcoa works in Adamstown, Maryland, which produced 8% of the aluminum in the United States, the Bethlehem Steel plant in Lackawanna, New York, and the Packard auto manufacturing  works in Detroit.

The Huber Breaker is a fitting focus point for trying to grasp the staggering abandonment of America's industrial hegemony. 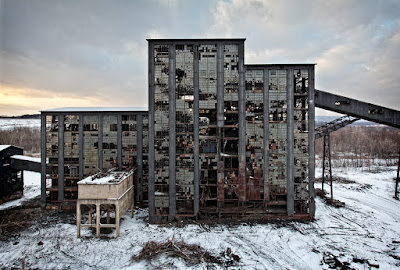 Christopher's wintry image of this now-demolished coal processing facility is an artistic masterpiece. Cezanne's geometric essentials have been transplanted from the painter's canvas to a photograph of gigantic, box-like superstructures mounting hundreds of square window panes or empty, broken frames.

Located in the anthracite coal-mining region of Luzerne County, Pennsylvania, Huber Breaker took raw coal and turned it into a high-grade variety, dyed blue, 7,000 tons of it per hour. The building's design practically screams "1800's." Yet Huber Breaker was built in 1939 and - initially - was threatened not so much by its own obsolescence as by changes in energy use following World War II.

What followed was even worse - the unthinkable collapse of the American industrial heartland centered on the Mid-Atlantic and Great Lakes states. This spelled the doom of Huber Breaker and of power stations like the Westport Generating Station in Baltimore, demolished in 2008. Fewer factories required less energy which led to staff layoffs and shuttered power plants. 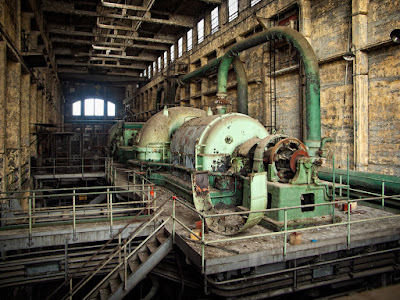 This downward spiral led to the second of the "consequences" upon which Christopher focuses with such discernment. This is the unraveling of the social fabric of communities no longer sustained by the tax base of local companies and their workers.

Believing that American industry was "too big to fail," many Americans could not, would not admit that schools, libraries, social clubs, theaters and even churches were being undermined by the escalating economic calamity around them. And  when these social institutions closed their doors in turn, the people they served faced the most terrible form of impoverishment - that of the mind and of the soul.

Many of the most haunting images in Abandoned America deal with three historic Catholic churches in Philadelphia. Once the "Workshop of the World" and the "City of Neighborhoods," Philadelphia has lost most all of its industry. Many Philly neighborhoods, once centered on local churches, linger on, neither fully alive nor clinically dead.

Christopher's churches include one fittingly called the Church of the Transfiguration. One of Philadelphia's largest Catholic churches, Transfiguration was constructed with the same level of craftsmanship and expensive, durable materials used in the churches of Renaissance Italy. Many of these historic churches of Italy, with paintings and sculptures by great masters, are still used for liturgies today. So too, Transfiguration, St. Boniface and St. Bonaventure were churches built to last for generations.

All three churches are now closed and their congregations dispersed. All three have been torn down. 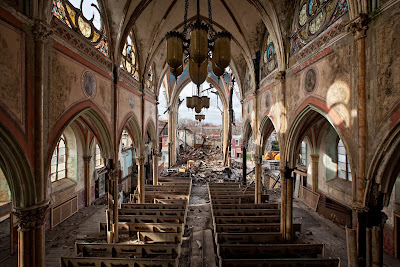 René Magritte or Salvador Dali could not have painted more surreal images than Christopher's photographs of St. Bonaventure Church during its demolition. Built during the early 1900's through the efforts of its German immigrant congregation, St. Bonaventure featured stained glass windows and bas reliefs, many of which were still in place when it was demolished in 2013 at a cost of $1 million dollars from the City of Philadelphia budget. 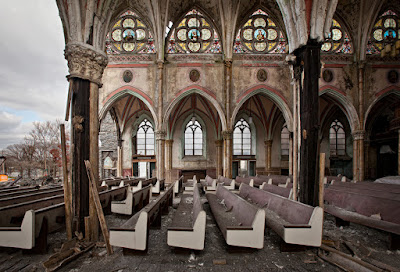 The pews of St. Bonaventure sit vacant in Christopher's stunning photograph, facing an open sky. But was the issue here really a matter of lack of community support or lack of will?

St. Bonaventure was situated in the the crime-ridden Fairhill neighborhood of North Philadelphia. The church, however, had been  evolving into a Latino parish. Moreover, adjacent neighborhoods are witnessing a resurgence as a young adult population is starting to purchase "fixer-upper" houses. Small business, even factories, are relocating to the nearby Kensington area.

In a few years, Fairhill is likely to experience these positive trends. But St. Bonaventure is gone.

In a way, St. Bonaventure and the other buildings in Abandoned America were victims of their own success. These institutions generated their share of public programs or corporate profits. When the cost of sustaining them was greater than the financial return, then these institutions were closed down. Some were abandoned like the Lebow Brothers Clothing Company  in Baltimore, with hundreds of usable garments left to rot. Others like Kohl's Motorcycle Sales & Service in Lockport, N.Y. became entangled in law suits. Kohl's burned down in 2013 under suspicious circumstances with scores of vintage bikes lost. 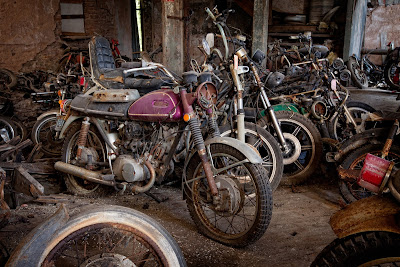 Tossing aside manufacturing sites or churches like empty cans of beer is not merely wasteful. It destroys a climate for small business development and for community involvement. It also leads to more wealth and power accumulating in fewer hands.

In the first volume of Das Kapital, Karl Marx noted that the mass of individual workers were not the only ones to suffer in the “merciless vandalism” that accompanied the “centralization of capital.” The early stages of industrial production are characterized  by a large number of small, private firms - iron foundries in the 1800’s, computer software companies during the 1990’s. But ruthless competition reduces the initial number of pioneers in favor of fewer, bigger and more powerful companies.

“One capitalist always kills many,” Marx declared, a prediction abundantly fulfilled by the demise of Autocar, Duesenberg,  Nash, Hupmobile and hundreds of other trail-blazing American car companies.

The longer-lived Packard Motor Car Company (1899–1958) eventually succumbed as well. Packard was a well-managed,  profitable company in the luxury car market, especially noted for exporting  automobiles to European and Asian royalty,  including the last Tsar of Russia. As Christopher wryly remarks, the rubble-strewn Packard industrial complex in Detroit "stands vacant, now a status symbol of a different sort." 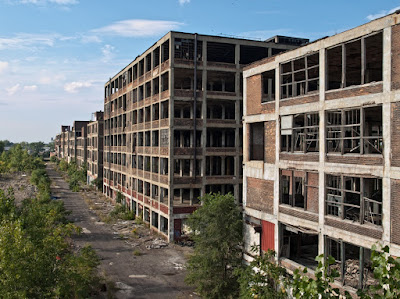 Several of Christopher's Packard photos look like they had been taken in the aftermath of the Battle of Stalingrad. But the seemingly unremarkable shot of the exterior of empty factory buildings is actually the most revealing. Look closely and you will see vines and sapling trees already beginning to cling to the vacant buildings. With these "scouts" in position, a further wave of trees and bushes is poised, ready to advance and invade the abandoned edifice.

The "reclamation"  by nature of deserted human habitations has happened countless times in the past. This scene from the Packard plant is strikingly similar to what occurred as the jungle of Central America engulfed the abandoned Mayan temples after the drought-stricken civilization collapsed around 900 AD.

The striking photos of the Carrie Furnaces in western Pennsylvania are very evocative in this respect. Christopher's images illustrate both Marx's theory of cut-throat capitalism  and of the "lost civilization" aspect of social decline.

Carrie Furnaces was built in 1906, across the Monongahela River River from the Carnegie-owned Homestead Steel works. The 1892 strike at Homestead brought the United States closer to a labor revolt than at any moment except the wave of union protests during the 1930's. Now, with its gantry crane looming above the surrounding vegetation, Carrie Furnaces looks as the deserted Mayan cities of Copán and Palenque did as the jungle closed-in a thousand years ago.

For all intents and purposes, it seems like the last vestiges of a civilization of giants. Rather than flaking frescoes or cracked religious reliefs adorning the walls, there are indecipherable graffiti tags from over the years. It is hard to imagine that such a place was ever inhabited, or that the furnaces once roared. The silence is nearly absolute, save for the rustle of the wind in the leaves or an occasional deer bounding through the grass.

This passage highlights Christopher's great ability as a writer and the thoughtful, inspiring nature of what he writes. Christopher often took great personal risks going to these abandoned and dangerous sites. Yet, the quest for the photos in Abandoned America was also an interior journey, marked by a courageous effort at reflection and self-assessment. 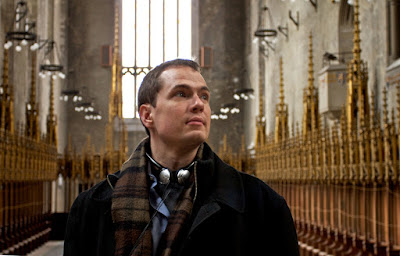 In a particularly moving passage in the essay on the Westport Generating Station, Christopher notes how he came upon the narrow gauge rail engine which brought coal to the upper levels of the Baltimore power station. With poetic insight, Christopher writes that discovering a rail engine and coal cars "perched atop the labyrinthine networks of turbine halls and furnaces was an abrupt shift between the waking and the dreaming world..."

The afternoon swiftly vanished and in what seemed no time the building too was gone forever. Occasionally it would reappear in my memory but it seemed too odd and improbable to be real. If I told someone about it, surely they would think me a liar, but I had the photographs to prove it. These flickering collections of pixels were not only Westport's witness, but my own.