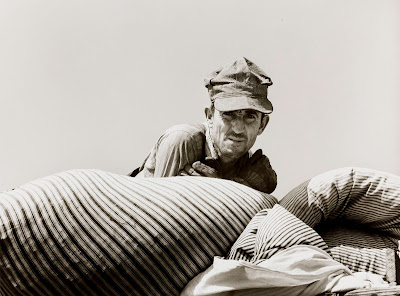 “Let America be America Again” proclaimed Langston Hughes in his 1935 poem. With searing, unflinching verse, Hughes condemned the social ills of the United States during the Great Depression, “the rack and ruin of our gangster death.” And yet, he held firmly to “the dream that’s almost dead today.”

These are bold, unforgettable words that stick in the mind. They are also words that are very difficult to express in visual terms. How can an artist depict a “land that never has been yet--and yet must be” with paint or sculptor’s clay?

The Phillips Collection in Washington D.C. has managed to evoke the “mighty dream” of Langston Hughes with a powerful exhibition of twentieth century photographs. American Moments: Photographs from The Phillips Collection embraces both the vision of the people of the United States and the reality of their lives. While Hughes is not directly mentioned in the exhibition wall texts, seldom has there been a better visual articulation of the American dream, "a dream so strong, so brave, so true,That even yet its mighty daring sings..."

American Moments is also a testament to the vision of Duncan Phillips, founder of the Phillips Collection. During the same period of Hughes' literary activism, Phillips (1886-1966) and his wife, Marjorie (1894-1985), created America's first museum of "modern" art. In a bold mission statement, Phillips in 1926 declared that the new venue would be an "intimate museum combined with an experiment station."

The Phillips "experiment station" joined forces in 1941 with the Museum of Modern Art to collect and promote Jacob Lawrence's Migration Series, the epic cycle of tempera paintings celebrating African-American history. Phillips supported many struggling American artists, buying paintings directly from them or from the New York galleries of Alfred Stieglitz, the Intimate Gallery and its successor, An American Place.

Anyone in the American art world during the first decades of the twentieth century could expect to hear from Alfred Stieglitz (1864-1946) on the subject of photography. Duncan Phillips entered into a lively dialog with Stieglitz and began to selectively collect work by noted American photographers, including cloud studies by Stieglitz himself. From time-to-time, the Phillips Collection mounted photo exhibits but never devoted the resources to build an in-depth  photo archive of its own. 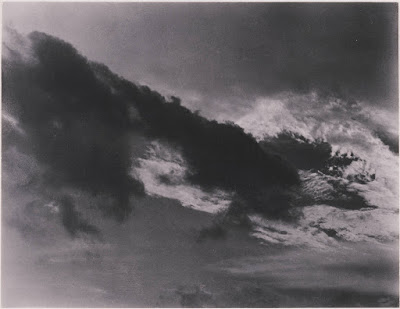 In 2006, the Phillips received a major gift of 152 photos by Brett Weston, a great photographer and the son of one of America's most legendary photo artists, Edward Weston. This marked the "takeoff" of the Phillips photo collection with acquisitions, predominantly donations, raising the photo holdings to 1,000 pictures. In 2014 alone, nearly 300 photographs were donated. These included works by major figures like Bruce Davidson. a personal favorite of mine and a living link to the hard-hitting photojournalism of mid-twentieth century America.

Davidson, born in 1933, draws on the street photography of Louis Faure (1916-2001). In his 1950 picture,Times Square, N.Y. (Home of the Brave), Faurer took a rather routine situation, investing it with magical ambiance and an ingenious subtext. Home of the Brave was one of the first major films to deal with a Civil Rights theme.Yet to look at the neon lights, you could easily jump to the conclusion that it was a big screen adventure flick starring Clark Gable or Tyrone Power. 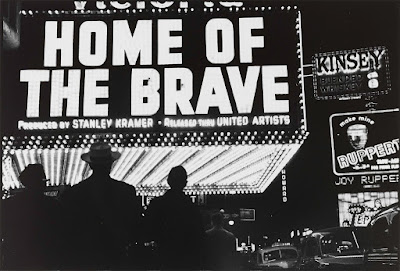 Davidson documented some of the most dramatic moments of the Civil Rights movement. He also  captured prosaic, matter-of-fact images of that remarkable era as well: stressed-out Freedom Riders, an impassive Martin Luther King, besieged with questions at a press conference. 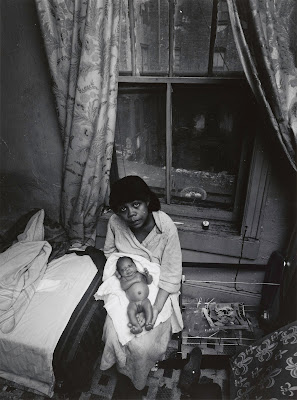 
Here, Davidson's  Woman with Newborn on Lap, (East 100th Street series), taken between 1966 and 1968, could represent either an icon-like representation of motherhood or a devastating critique of the African-American experience of urban poverty in a time of plenty.

The same dilemma arises when we study another Davidson photo from the mid-1960's, Girl Waving with Sign on Road, (Los Angeles series). To go from Woman with Newborn on Lap to this picture may be a "from the sublime to the ridiculous" transition. The multiple meanings that can be imparted to Girl Waving with Sign, however, testifies to the oracle status of great photography. 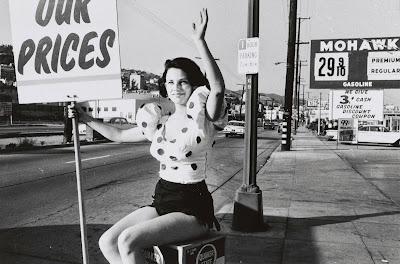 Which answer would you pick:
The "correct" answer is there for the choosing. But we have to decipher its meaning, as with the oracles of ancient times.

Values, insights - meaning in art - often change with time. When Davidson photographed Girl Waving with Sign in 1964, most people would have classified it as a delightful example of Americana. Their values would have been shaped by popular television shows like Petticoat Junction or That Girl and by Coca Cola ads - "The Pause that  Refreshes" - with pretty young ladies in polka dot blouses.

With the polar ice caps melting from overuse of fossil fuels, we are confronted with a different scenario. The "meaning" of this photo changes too. Girl Waving with Sign in 2015 is a modern day Siren, beckoning us to our doom as her ancient counterparts tried to do to Odysseus on his voyage home from the Trojan War.

We can subjectively interpret the photos in American Moments with some confidence because the exhibit itself is thematically arranged. This comes as a slight surprise. American Moments is the first exhibition of photos from the Phillips Collection, 130 photos by thirty-three artists. The exhibit might well have been arranged to illustrate the evolution of the photo archive at the Phillips. Marjorie and Duncan Phillips, however, frequently chose to explore the meaning of their paintings in special exhibits. American Moments keeps to this great, open-minded tradition.

An early favorite of Duncan Phillips was Clarence John Laughlin (1905-1985). In 1943, the Phillips Collection presented a solo-exhibit of Laughlin's photos. The Louisiana-born photographer certainly gave his viewers a lot to ponder.

Laughlin grew-up in an atmosphere of genteel poverty. With the relics of the Old South all around him, he became the visual artist of "Southern Gothic." What Carson McCullers and Walker Percy explored  in words, Laughlin presented with imagery. 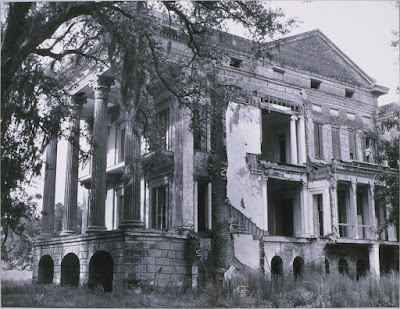 Laughlin frequently used photo montage to created some of the most surrealist photographs in American history.However, Grandeur and Decay No. 1, 1944 did not require any "special effects" to present an indelible symbol of the collapse of the grandiose, slavery-based, culture of the American South.

Grandeur and Decay No. 1, 1944  depicts  the passing of a "heroic" age while Lewis Hine's Empire State Building, 1931, shows a new era on the rise. Certainly there was incredible courage, tenacity and skill involved in the construction of the skyscrapers of Gotham City. Hines's photographs of the Empire State Building, however, were utilized to create a "myth" of progress for New York City that was as problematical as the sense of decline and fall in Laughlin's Grandeur and Decay. 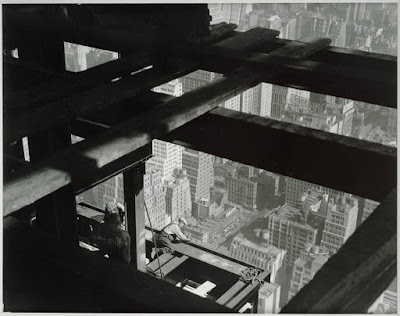 
The Empire State Building opened in 1931, shortly after Hine (1874-1940) took this vertigo-inducing photo. But the "Empty State Building" (as New Yorkers referred to it) was a financial black hole for most of its early years. Floor after floor of vacant office suites echoed like a tomb. For much of the period, the management of the Empire State Building relied on the fees paid by tourists to use the observation deck to keep the towering edifice standing.

What both Laughlin's Grandeur and Decay and Hine's Empire State Building show is the incredible harshness of American life during much of the twentieth century. We can see this too in the incredible array of portraits and group shots of America's people during an era of economic turmoil and of total war. Look at the faces on the gallery walls of the Phillips Collection and you will see people, in Langston Hughes' words, "battered through the years." 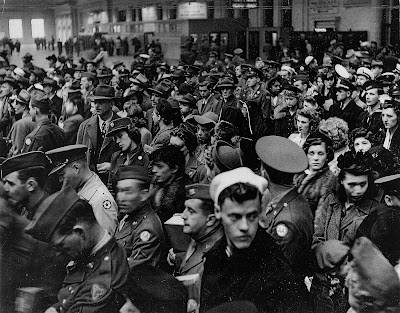 
It is particularly jarring to note the grim expressions of wartime service men and women in 1943 at Washington's Union Station. Their home leaves are over and they are headed back to war. Alfred Eisenstaedt (1898-1995) captured an image of foreboding that can still be felt all these decades later. I was struck by the slightly-out-of-focus soldier in the center. A year later, he could have been the central figure in Robert Capa's blurry, over-exposed photo of a GI Joe struggling in the surf to reach Omaha Beach on D-Day.

So too might Jack Delano's protagonist in Untitled (Railroad Man), the introductory photo of this review. Put a combat helmet on the head of this hunched, weary man and he might just as well be standing behind a parapet of sandbags at Tarawa or Anzio as at a railroad depot.

The real standout for me among the American Moments photographers was Esther Bubley (1921-1998). A photographer for the Office of War Information under the dynamic Roy Stryker, Bubley documented the American home front during World War II in a number of photographic series. These photo series may sound a bit dull and of little importance today - people in line waiting for war-rationed shoes or riding a bus to Pittsburgh, PA-  but Bubley created a time-machine portrait of the lives of America's people that borders on the definitive. 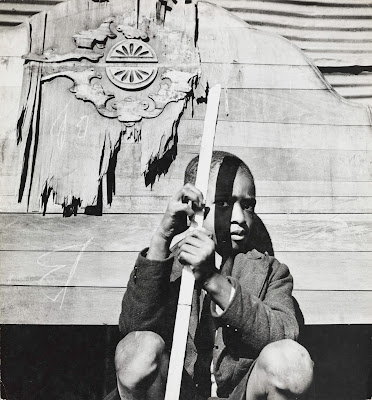 Esther Bubley, A Child Whose Home Is an Alley Dwelling near the Capitol, 1943


Amid the hundreds and hundreds of photographs taken by Bubley, a number are truly iconic. One of them is displayed in American Moments, A Child Whose Home Is an Alley Dwelling near the Capitol, 1943. This was part of a series aimed at depicting the appalling living conditions of African-Americans in Washington D.C. only a few blocks from the White House. Bubley's photos were quite effective in meeting the goals of her assignment but this picture is a symbolic masterpiece of inspiring merit.

The shadow cast by the length of wood held by the little boy transfixes his body. His right eye peers through the shadow making it seem like the disembodied eye of an alien being rather than one of a pair of eyes belonging to a scrawny, underfed, apprehensive little chap, trying to keep out of trouble. That eye in turn transfixes the viewer, forcing him or her to recognize the humanity of this child and the inhumanity of the "Jim Crow" racial oppression that blights his life.

With this photo, Bubley truly captured what Henri Cartier-Bresson called the "decisive moment." It was a transforming moment, as more and more Americans came to realize -sometimes unwillingly - that the racial segregation that had arisen following the Civil War could no longer be tolerated now that America was the leader of the Free World.

America did change following World War II and change for the better. The American Moments exhibit is a brilliant evocation of these social changes.

It is important to note that this wonderful exhibition at the Phillips Collection also documents the joys and  pleasures, the "pursuit of happiness" that figure in the American story along with sorrows and challenges. 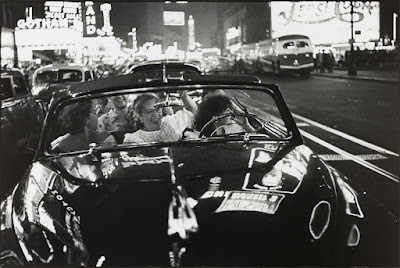 Louis Faurer's Broadway, New York, N.Y., shows a group of laughing friends in a snappy sports car with the bright lights of the city reflected on its polished, gleaming surface. Faurer's astonishing picture was taken between 1949 and 1950 - or was it just last night?

If there's a better illustration of American joie de vivre, I've never seen it. And when joy of life is shared by all our citizens, then Langston Hughes' dream will come true at last and America will be America again.

Posted by Art Eyewitness at 4:16 PM