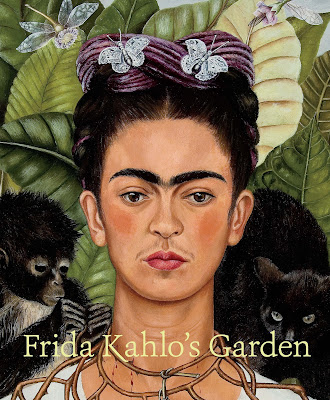 By  Adriana Zavala and others
DelMonico Books-Prestel Publishing/$34.95/136 pages

Frida Kahlo was no stranger to suffering and misfortune. Her destiny was shaped by a shattering traffic injury in 1925 and by her tempestuous marriage to fellow artist, Diego Rivera.

"There have been two great accidents in my life," Kahlo reflected. "One was the trolley, and the other was Diego. Diego was by far the worst."

Despite her travail, Kahlo (1907-1954) could always find a refuge in which to handle her pain, a place of inspiration, a private sanctuary. It was her childhood home in a suburb of Mexico City and the place where she died. It is called La Casa Azul. The Blue House.

The New York Botanical Garden (NYBG) is featuring a remarkable recreation of the garden and art studio of the Casa Azul in their major exhibit of 2015, Frida Kahlo: Art, Garden, Life.

A splendid companion book to the exhibition, Frida Kahlo's Garden, has been published by DelMonico Books and Prestel Publishing. The curator of the NYBG exhibit, Adriana Zavala, an expert on Mexican art from Tufts University, is the chief author of this book. Zavala and a team of art scholars explore Kahlo's fascination with the flora and fauna of her native Mexico.

This insightful and beautifully illustrated volume also details the process by which the curators of the New York Botanical Garden evoked the Casa Azul in the exhibition space of the Enid A. Haupt Conservatory. 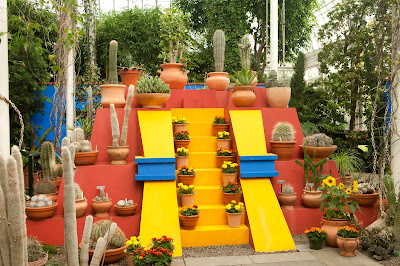 Rather than aiming to duplicate Frida Kahlo’s garden and studio, the NYBG exhibition is a “reimagined” version of Kahlo's living space and her imaginative realm. This includes a scale version of the colorful Aztec-style pyramid in the garden and a recreation of Kahlo’s studio. The wonderful preliminary designs by Scott Pask reveal both the meticulous attention to detail and the  artistic vision that enabled the NYBG staff to "bring the essence of the Casa Azul to the Bronx." 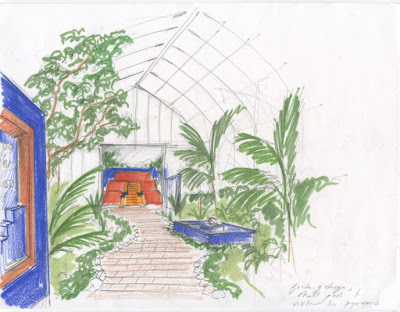 Special attention in the NYBG exhibit is given to the natural surroundings of Mexico which Kahlo closely studied as a young person. She had been planning a scientific career rather than one in the arts. An early work, Small Life (II) from 1928 reveals Kahlo's fascination with the diversity of nature around her. After her injury-battered body would no longer allow her to venture far afield, Kahlo and Diego Rivera created a courtyard version of the natural environment of Mexico at the Casa Azul.

Kahlo's life and art were influenced by her living arrangements due to the long periods she spent at the Casa Azul. These periods of convalescence grew longer and longer as her health declined. But the courageous and stubborn Kahlo never allowed physical disability to define her life. The Casa Azul became - and remains - a testament to the passion and vitality of Frida Kahlo's life.

To an extraordinary degree, the Casa Azul reflected Kahlo's interior and exterior worlds. Kahlo's embrace of Mexican folk culture and love for the spectacular botanical setting of her native country infused her artistic life. Many of the details of Kahlo's paintings and the design of the garden of the Casa Azul are filled with symbolic references to fertility that reach back to the Aztec, Olmec and Mayan cultures of Mexico's past - and to her own personal history. 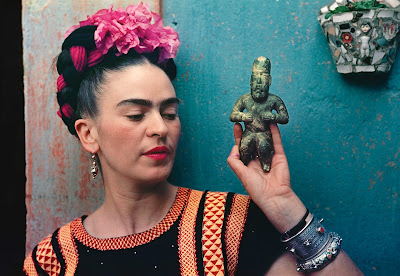 Denied by the tragic circumstances of her health from bearing children, Kahlo created a realm of potent life force in her painting and in her garden.

The Casa Azul, which the New York Botanical Garden so brilliantly evokes, has a design history that conveys a real sense of the social transformation experienced by Mexico during the 20th century.

The Casa Azul was built in what was then a suburb of Mexico City, Coyoacán, and was purchased in 1904 by Kahlo's father. The original design of the house was influenced by classical French architecture, then in vogue in pre-Revolution Mexico. During the 1940's, the dwelling was redesigned by architect, Juan O'Gorman, to reflect the appreciation of Mexican culture shared by Kahlo and her husband, Diego Rivera, re-united after earlier marital disputes.

O'Gorman (1905-1982) is a fascinating figure in his own right. He was born, like Kahlo, of a European father and a Mexican mother in Coyoacán. He was influenced by Rivera to become a distinguished muralist in his later career.

In a very enlightening essay, art historian Kathryn O'Rourke notes that Coyoacán figured prominently in the rediscovery of Mexico's botanical identity during the childhood years of Kahlo and O'Gorman. An important tree nursery was established early in the 20th century, the Viveros de Coyoacán, and a private garden was created there around the same time, decorated with art work evoking the pre-Hispanic cultures of Mexico. These elements would feature prominently in the redesigned Casa Azul. 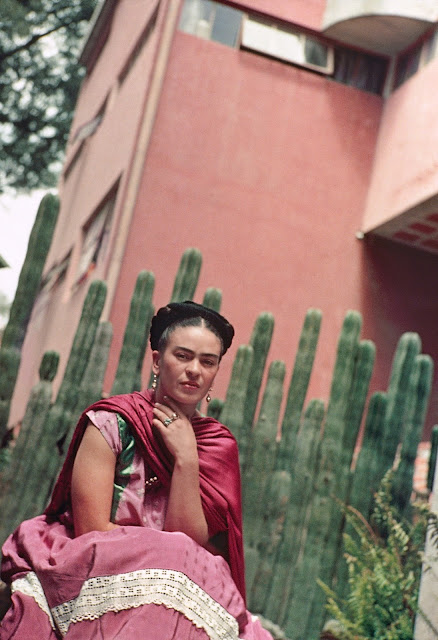 There is a magnificent color photo of Frida Kahlo, taken by Nickolas Muray in 1938. It shows Kahlo posing before a fence of tall cactus plants which form a wall around Rivera's house in the San Angel neighborhood of Mexico City which O'Gorman designed for him in 1931. Later, when the Casa Azul was redesigned, a wall of soaring Organ Pipe cacti was planted there as well. The European flowers, planted earlier by Kahlo's father, were largely replaced by a "flowering of Mexico." 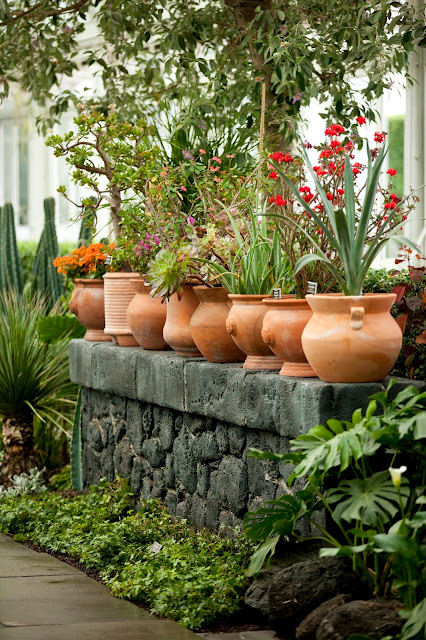 
It is fascinating to scan the lists of native plants and flowers which were planted in the garden of the Casa Azul during the 1940's. Many can be documented in the vintage photographs taken by Muray, Gisèle Freund and others. These range from the silvery, shaggy (but sharp) "Old Man" cactus and floripondio or angel's trumpet to sunflowers and poinsettia. 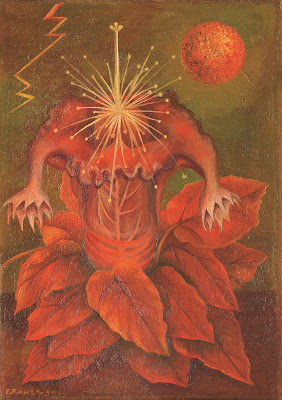 Even a quick glance at Flower of Life will detect the powerful currents of sexual energy infusing this painting. But there is much more to this work than explicit sexuality, as Ms. D'Avanzaa astutely notes.

Angel's trumpet contains pain-dulling alkaloids. The poinsettia also had reputed medicinal qualities, which were described in the famous Florentine Codex, compiled in Mexico during the 1500's. It was believed to help lactating mothers produce milk for their infants. For Kahlo, the hidden symbolism in this forceful, disturbing work would have spoken of her recurrent bouts of physical pain and of her anguish at not being able to give birth.

It is interesting to note that the number of still life paintings and flower paintings increased during Kahlo's later years. While the earlier series of Kahlo's self-portraits denotes her attempt to find and express her identity, Kahlo's still life paintings show that she had reached a point of self-realization.

During the years when the Mexican garden bloomed at the Casa Azul, Kahlo was now free to explore the roots of her Mesoamerican heritage. In Still Life (For Samuel Fastlicht), Kahlo placed a ceramic votive piece depicting a xoloitzcuintle dog, a breed of hairless dog native to ancient Mexico. This clay-fired statuette came from Rivera's extensive collection of Olmec and Aztec art works which he displayed on the Casa Azul's pyramid. 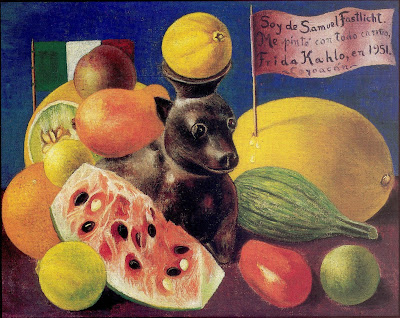 Xoloitzcuintle dogs figured as Mesoamerican mythology as the escorts of kings and warriors on the journey to the next world. They were also sacrificed and eaten in religious feasts. Native Americans, unlike Europeans, had no aversion to eating dogs.

Frida Kahlo kept several "Xolo" dogs as pets and one particular favorite, Señor Xolotl, figured in her 1949 masterpiece, The Love Embrace of the Universe, the Earth (Mexico), Myself, Diego and Señor Xolotl. Surrounded by a superabundance of symbols of life and death, the Xolo sleeps blissfully on the wrist of a goddess figure.

With the ceramic Xolo dog, the Aztecs' companion to the next world, surrounded by an array ripe fruits, Still Life (For Samuel Fastlicht) may be interpreted as a meditation on life and death. This of course is a theme at the heart of Mexican culture and Kahlo increasingly addressed universal and cosmological themes in her painting.

As with all Frida Kahlo's art, there is a personal aspect here as well. Samuel Fastlicht was Kahlo’s dentist and this was one of two still life paintings that she gave him. Kahlo was deeply grateful to the doctors who tried to ease her suffering. The beads of liquid leaking from the melon where it has been pierced by the staff of the banner, however, raise the question of whether these droplets symbolize tears of gratitude or of suffering.

In 1950, Kahlo endured seven spinal operations and was bed-ridden for much of that year and 1951, the year she painted Still Life (For Samuel Fastlicht). Given her constant pain, it is hard  not to view the still life paintings of her final years as an acknowledgment of human mortality - including her own. 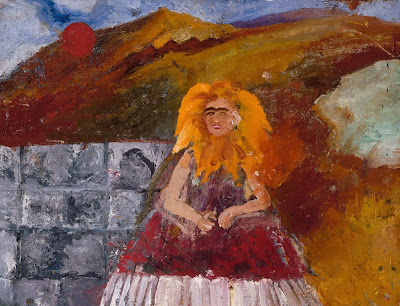 Frida Kahlo, Self Portrait inside a Sunflower, 1954

In 1954, Kahlo painted a final self-portrait, notable for its rough brush strokes and uncompleted feel. Self-Portrait inside a Sunflower hardly invites comparison with her highly finished works like the Self-Portrait with Thorn Necklace and Hummingbird (1940) also on view. Yet, Self-Portrait inside a Sunflower is a profoundly moving work. The sunflower, known in Mexico as maiz de teja is a native species. Here, Kahlo is not so much wearing petals from the sunflower as she is becoming one herself.

Self-Portrait inside a Sunflower calls to mind the story of Apollo and Daphne from Greek mythology and memorably sculpted by Gian Lorenzo Bernini in 1625. Daphne, fleeing from the lustful advances of Apollo, turns into a laurel tree. Although no chaste nymph herself, Frida Kahlo evaded the misfortunes of life by identifying herself with the natural world of her native country.

Denied by a cruel fate of being able to travel throughout Mexico, Frida Kahlo brought Mexico home to Coyoacán. With the help and  financial support of Diego Rivera, the garden of the  Casa Azul was turned into a microcosm, in the true sense of the word. The Casa Azul became a "small world" reflecting the greater world. 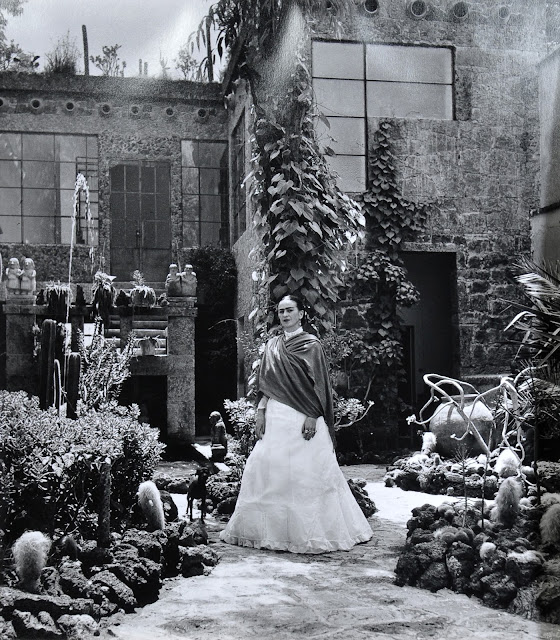 This was the world that Frida Kahlo embraced artistically and emotionally. Thanks to the New York Botanical Garden exhibit and the exceptionally well-done companion volume from Delmonico/Prestel, we can go there too.

Posted by Art Eyewitness at 8:17 PM