Life Lines: Portrait Drawings from Dürer to Picasso at the Morgan Library 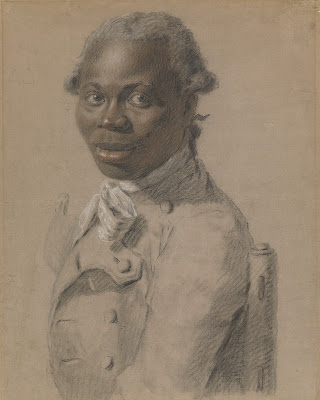 Life Lines: Portrait Drawings from Dürer to Picasso, the superb exhibition at the Morgan Library and Museum, confirms one of the essential facts about art.

Drawing is the foundation, the one indispensable prerequisite, of all great art.

During the Renaissance, Giorgio Vasari called drawing, "the animating principle of all creative processes." An artist skilled in drawing can see through levels of skin, muscle and bone to glimpse the vitality and intelligence of the person under study. 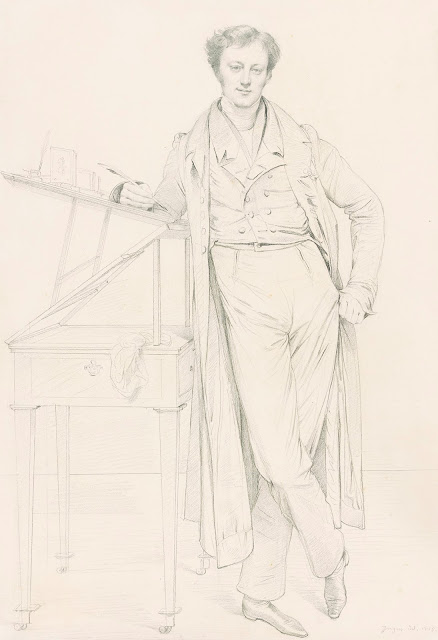 Jean-Auguste-Dominique Ingres (1780-1867) was one of the supreme masters of drawing in art history. Ingres did not just portray Adolphe-Marcellin Defresne in the 1825 sketch on view in Life Lines. Ingres summoned Defresne to life with a graphite pencil.

The exhibit at the Morgan wisely focuses on the portrait sketch as its particular theme.
Life Lines begins with this art form at its earliest moment of full flowering. In short, the signature image of Life Lines is an extraordinary drawing by Albrecht Dürer.

Dürer (1471–1528) approached drawing with a meticulous attention to detail based upon the German print tradition, with its wonderful woodblock prints from the Middle Ages. Another decisive factor was his astonishing, innate talent. On display in Life Lines is Dürer’s Portrait of the Artist's Brother Endres, created with charcoal and white highlights. This drawing, a likeness executed with consummate skill, can stand up to a full-scale oil painting by almost any later European portrait painter. 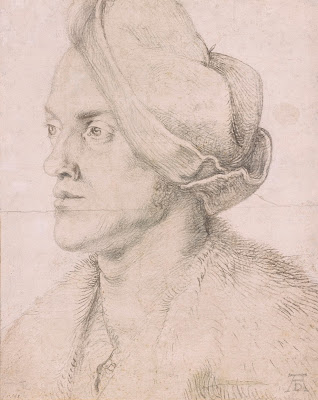 Endres (Andreas) Dürer (1486-1555) was a goldsmith who is believed to have collaborated with his older brother on metalwork designs. This portrait drawing shows a totally unidealized likeness of Endres. Yet the work, created in 1518, sparkles with intelligence, determination and self-confidence. These were the attributes that enabled German craftsmen to pioneer the printing press revolution of the 1400's. Such a pugnacious character likewise motivated Martin Luther to take his stand against the Roman Catholic Church on the issue of papal indulgences the year before Dürer sketched his brother.

Life Lines displays a work by another German-born artist of the Renaissance. Like Dürer, Hendrik Goltzius (1558-1617) was acclaimed in his lifetime. A brief look at Young Man Holding a Skull and a Tulip, however, reveals the chasm between the early Renaissance and the later, post-1517 years. The crisis caused by the split in Christendom after Luther's rejection of papal authority profoundly affected the arts in Europe. 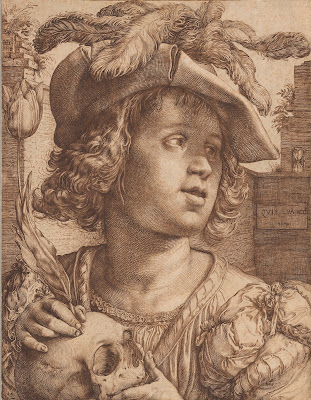 Hendrik Goltzius, Young Man Holding a Skull and a Tulip, 1614

Goltzius used pen and brown ink on paper to create this extravagant - and deeply despairing -work. All of the plumes and ruffles of the young man's attire, his youthful curls and beaming, healthy face will fade and decay leaving a bleached, pitted skull such as he holds in his left hand.

In the young man's right hand is a tulip, the exotic flower imported into Europe from Asia during the 1500's. Tulip "mania" reached epic proportions in Holland where Goltzius moved in 1577, after surviving a brush with death in a fire that maimed his right hand. The tulip, which the young man holds, will soon wither, as the boy's flowering youth will too - sooner or later.

Goltzius was a master of the allegories and symbolism of Mannerism, the decidedly peculiar school of art that spread throughout Europe following the Reformation. Goltzius was also adept at realistic depictions of human beings in their "everyday" modes and feelings. In this, he pointed the way to Rembrandt and the Dutch Golden Age.

Rembrandt is represented in Life Lines with a particularly heart-warming drawing. Two Studies of Saskia Asleep, dates to 1635-37, and is one in a series of pen and brown ink studies by Rembrandt. These show a young woman, presumed to be his beloved wife, in bed.  Drawing does not get any better than this exquisite work. The loose, swirling lines of the drawing are almost calligraphic in effect. Yet the details of the two faces, however "sketchy" they appear, capture both the act of Saskia sleeping and - on Rembrandt's part - the act of observation. 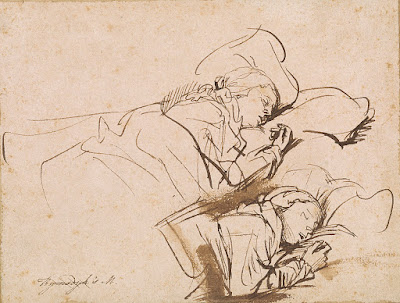 Saskia died of tuberculosis in 1642, after losing three infant children in close succession. Rembrandt might well have succumbed to melancholia watching his wife waste away. Two Studies of Saskia Asleep shows Rembrandt's wife while she still enjoyed good health but it says a great deal for Rembrandt's stamina that he was able to evoke the same elements of human alchemy in his later portraits of his son Titus and of Hendrickje Stoffels, the love of his later years.

Two Studies of Saskia Asleep is a timeless and universal work of art. It is the kind of drawing or painting that can never be arbitrarily assigned a place on a timeline. In fact, the curators of Life Lines wisely refrained from creating a chronological framework for the exhibition. Instead, the show is organized into four thematic sections: Self-Portraits, Family and Friends, Formal Portraits, and a final, problematical category, Portraits?

Every human being lives in a universe of their own. Not even the broad categories of the Morgan exhibit can quite contain the individuals whose portraits are displayed there. Some of these works do indeed represent family or friends, but the portraits often tell more than what meets the eye at first glance.

Henry Fuseli (1741-1825), emigrated from Switzerland in 1763 to England. There, his blend of psychological insight and visionary literary motifs helped define the "Romantic Rebellion" as Kenneth Clark once called the wave of restless, anxiety-filled art that began around 1760.

Fuseli made a return visit to Switzerland in 1778-79. While there, he executed a striking, though seemingly conventional, drawing of a young woman named Martha Hess (1759-1779).  Martha Hess was the niece of Fuseli's friend Johann Kaspar Lavater (1741–1801), a noted scientist and philosopher. 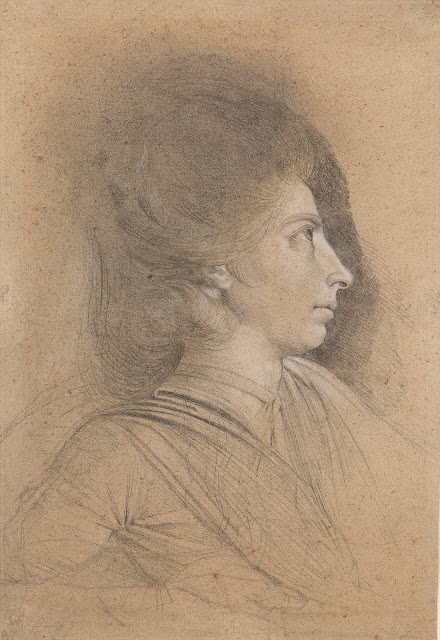 Look closely at Martha Hess and you will realize that this is a much more unconventional drawing than first appears. Fuseli gave an upward tilt to the eyes which is rare in profile views of the human face. This totally transforms the work, rendering it more of a meditation on the inner attributes of Martha Hess than a study of her facial features, superbly delineated though they are.

Martha Hess was described as "ethereal" in temperament. This would have added to the attraction for Fuseli. Shortly after this beautiful black chalk drawing was made, Martha Hess died in December 1779 from tuberculosis - just like Rembrandt's Saskia. Fuseli continued to draw Martha Hess from memory, always with expressive, searching eyes. Later, four of Fuseli's drawings of her and of her sister, Magdalena, were used as illustrations in Lavater's book on human expressions.

Portraits sketches have a way of insisting upon human values in ways that can be challenging or disconcerting - and ultimately life asserting.

A case in point is Joseph Ducreux's brilliant chalk drawing, Portrait of a Gentleman.

Created around 1802, this drawing has long been believed to be a likeness of the great Haitian opponent of slavery and colonialism, Toussaint Louverture (1743–1803).

Toussaint Louverture led the Haitian resistance to Napoleon's campaign to restore slavery to Haiti. Louverture was treacherously seized and sent to France where he died in prison in 1803. The ship bringing Louverture to France arrived on July 2, 1802. Joseph Ducreux, who drew this stunning work of art, died near Paris on July 24, 1802. Could he have managed to arrange a meeting to sketch the imprisoned opponent of Napoleon in so brief an interval?

Joseph Ducreux (1735–1802) was fascinated with human expressions, as was Fuseli's friend, Lavater. It is possible that he made a special effort to draw a likeness of Toussaint Louverture, soon after the arrival of the captured freedom fighter. But Louverture was quickly locked away in a forbidding fortress in the mountains near Switzerland. As a result, the window of opportunity for Ducreux to have created a drawing of Louverture was very quickly closed.

There is a tantalizing possibility that Ducreux might will have “seized the moment” long enough to sketch the celebrated Louverture. Ducreux was a painter with wide political contacts and his daughter was married to Francois-Jacques Lequoy de Montgiraud, one of the colonial officials sent by Napoleon to restore French rule – and slavery – to Haiti.

Rose-Adélaïde Ducreux (1761-1802) was an accomplished musician and a gifted painter who had studied with her father. The Metropolitan Museum of Art has a self-portrait in its collection which compares very favorably with works by her contemporaries, including her father. She traveled to Haiti with her husband and thus was well-placed to send word to her father of the arrest and deportation of Louverture in June 1802.

Such a note, however, would have had to travel on board the French warship taking Louverture to incarceration in France. At best, this would have been a minor miracle of message sending in an age of slow travel and uncertain delivery.

Ducreux died with days of a meeting – if indeed it took place. His daughter succumbed the same year to yellow fever, in Haiti. Louverture perished in captivity in 1803. The French lost over 50,000 men in their doomed campaign to regain control of the island. Most of them, like Rose-Adélaïde Ducreux, fell victim to yellow fever. Death had the final say in this story.

If this drawing is not a portrait of Louverture, does it reduce the value of this wonderful work of art? A quote from Louverture himself puts this question in perspective.

"In overthrowing me you have cut down in Saint Domingue only the trunk of the tree of liberty," Louverture warned his French captors, "it will spring up again from the roots, for they are numerous and they are deep."

With these memorable words, Louverture struck right to the heart of the anti-slavery crusade - and to the value of Ducreux's Portrait of a Gentleman. 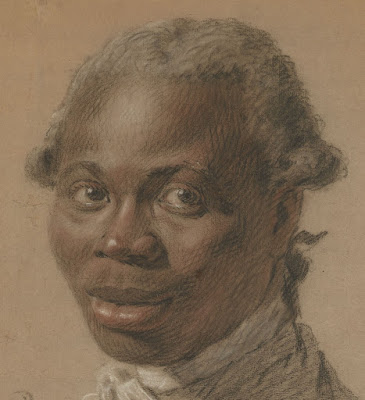 Look into the eyes of Ducreux's Gentleman. There you will see the gleam of courage and will power which inspired Toussaint Louverture in his resistance to Napoleon. It is the portrait of the human determination to be free.

The roots of the Haitian revolt were indeed "numerous and ... deep."

The works on display in the exhibit are drawn entirely from the collection of the Morgan Library and Museum. It says a great deal about the scope and quality of the Morgan's collection that the curators could mount an exhibit on portraiture that addresses almost every aspect of human character. 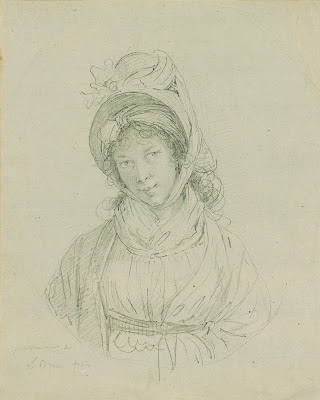 Along with weighty issues like individualism and liberation, Life Lines presents images of people just being people. It is quite endearing to see the lovely self-portrait of Elisabeth Vigée Le Brun (1755-1842), showing her in a moment of happiness, contentment and success around the year 1790.

In a swift, shocking turn of events, the French Revolution soon swept away the "sweetness of life" that Vigée Le Brun evoked in her paintings. However, for that moment, the eternal now of her Self-Portrait, the world belonged to Elisabeth Vigée Le Brun. 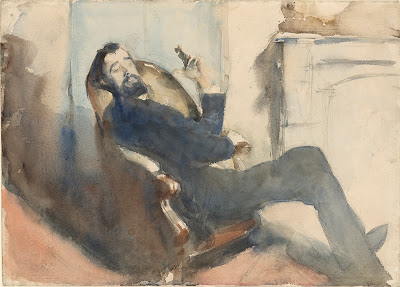 A century later, John Singer Sargent (1856-1925), depicted the carefree company of his friends and family that enabled him to escape the stressful grind of painting society "pawtraits." Portrait of Paul-César Helleu is a delightful affirmation of the joys of relaxation. Just enjoy life!

Life Lines: Portrait Drawings from Dürer to Picasso concludes with a section on works that may or may not be portraits or self-portraits. Young Man Holding a Skull and a Tulip is displayed here.

I wonder if the question mark hovering over this final part of the Morgan exhibit should more fittingly be referred to the role of the portrait sketch in the age since Cubism and Surrealism cut the bonds between life-like representation and what is considered "cutting edge" art. That would certainly make for another great exhibit at the Morgan Library and Museum.

For now, I will bask in the timeless presence of the assembled company of Life Lines. To them – and especially to Ducreux’s Gentleman – I extend the concluding lines of William Wordsworth’s sonnet in honor of Toussaint Louverture:

Images of Life Lines: Portrait Drawings from Dürer to Picasso, courtesy of the Morgan Library and Museum, New York City