Ancient Egypt Transformed: the Middle Kingdom at the Metropolitan Museum 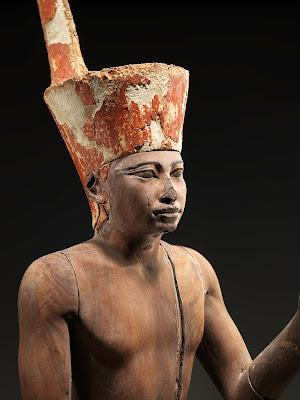 There is a Russian proverb that speaks for human experience across the ages, "There is no evil without some good."

This ever timely insight is particularly appropriate for Ancient Egypt's "time of troubles." A breakdown in central authority occurred with the collapse of the Old Kingdom (2575–2125 B.C.).

The ensuing chaos triggered over one hundred years of civil war known as the First Intermediate Period (2125–2010 B.C.). From this century of strife arose a new era of Egyptian power and cultural achievement, the Middle Kingdom (2010–1630  B.C.).

The Middle Kingdom is the subject of a brilliant new exhibit at the Metropolitan Museum of Art, Ancient Egypt Transformed: the Middle Kingdom. It is on view from October 12, 2015 to January 24, 2016. Surprisingly, this is the first comprehensive exhibition ever mounted on this vital era of the ancient past. 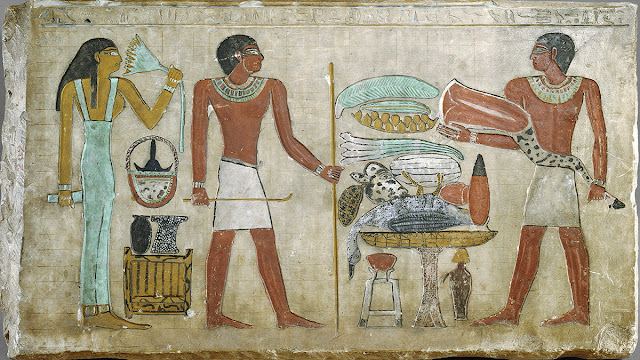 The Middle Kingdom thus represented the inverse of the Russian proverb, with more good than evil. Yet this glittering period of accomplishment bequeathed a number of ominous developments that in time would prove a fateful inheritance.

Ancient Egypt Transformed begins with two statues that are contradictory and complementary. We can visualize to an extraordinary degree how Middle Kingdom artists both preserved hallowed traditions and expanded or reformulated them.

A colossal statue of an idealized, seated Pharaoh (320 cm or nearly 10 1/2 ft. tall) is positioned in the Metropolitan Museum's main lobby. This imposing Middle Kingdom piece is on loan from the Ägyptisches Museum in Berlin. It was sculpted in a highly polished manner similar to exquisite Old Kingdom statues. 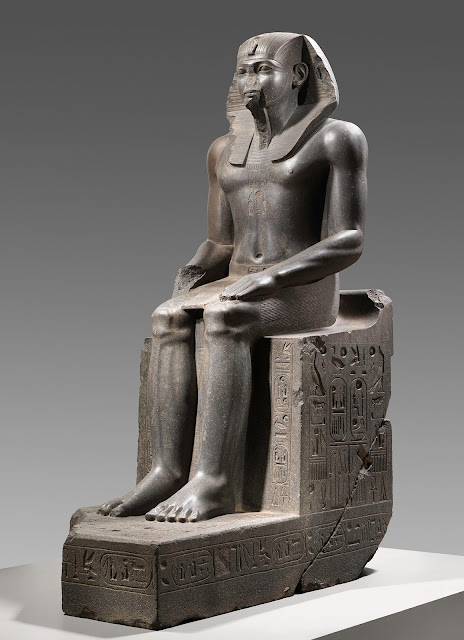 The mighty Pharaoh sitting in splendor in the Met's lobby would seem to represent a degree of continuity between the Old and Middle Kingdoms. That is exactly opposite to what happened. The breakdown of Egyptian society during the First Intermediate Period was cultural and artistic as well as political. Many of the exacting skills needed in the fine arts and architecture decayed to the point where they had to be relearned.

This is very evident in the Statue of Nebhepetre Mentuhotep II. It was one of twenty two statues of this type, each clad in a special jubilee robe. Originally, the statues once lined a temple processional path. Perhaps the impressive placement of these works compensated for the lack of expertise in crafting them.

Mentuhotep II (ca. 2030–2000 B.C.) was the first of the Middle Kingdom pharaohs. He set Egypt on the road to recovery after the Intermediate Period. That did not spare his image from rough treatment, as each of these statues was subsequently maimed, decapitated and the "body parts" scattered. Luckily most of the components of the Metropolitan Museum's example were found, enabling us to study a truly transitional work of art.

The stiff, mummy-like pose of the Nebhepetre Mentuhotep II statue was based on Old Kingdom models. It was intended to look "old fashioned." The modeling, however, was very poor, verging on the inept, with huge feet that would have better suited a statue twice as tall.

Size, rather than the quality of sculpting, is key to understanding Nebhepetre Mentuhotep II. It stands a little over 8 ft. tall (252.9 cm) but that includes the base. As the base was buried in the ground, the statue is close to human scale. And its face, perhaps due to its lack of sophisticated modeling, exudes a greater sense of humanity than the huge seated Pharaoh currently holding court in the Met’s lobby. 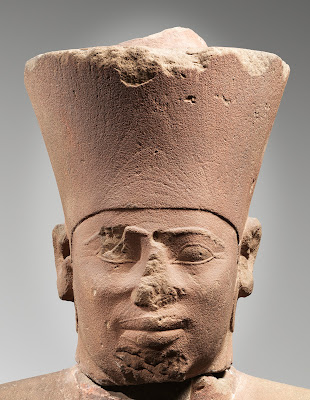 Mentuhotep's dynastic line was quickly extinguished and a new one, Egypt's Twelfth Dynasty, was founded by a capable commoner named Amenemhat I. The Twelfth Dynasty, 1981 –1802 B.C., represented the Middle Kingdom at the zenith of its political power and cultural influence.

An image of a member of that dynasty, Amenemhat III, who ruled ca. 1859–1813 B.C., is the focal point of the entire exhibition. This work testifies to the success of Middle Kingdom artists in rediscovering the skills of the Old Kingdom and then progressing to greater heights of creative accomplishment.

Head of a Statue of Amenemhat III Wearing the White Crown from the collection of the Ny Carlsberg Glyptotek in Copenhagen, Denmark, is an unsurpassed masterpiece even in its severely damaged form.  It was sculpted from graywacke, a hard siltstone from quarries near the Red Sea. The Egyptians were master carvers of graywacke as far back as the fabled Narmer Palette, executed in honor of the first pharaoh around 3100 B.C. 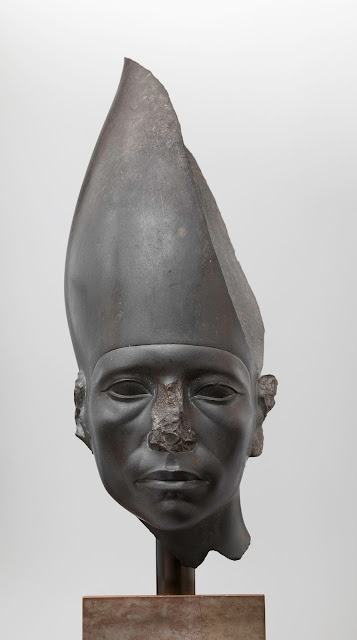 A truly astonishing degree of modelling was devoted to Head of a Statue of Amenemhat III. The texture of the skin is so lifelike that with a wash of color it would be entirely believable. Likewise, the expression of Amenemhat exudes the classical, godlike power of Old Kingdom portraits. This is balanced with a world-weary sensitivity that would not be rivaled until the Hellenistic Greek sculptors fifteen hundred years later.

Had the Statue of Amenemhat III survived in any form approaching a fully realized work, it would be regarded as a masterpieces of world art. Yet there is a more profound development present in Middle Kingdom art that surpasses the importance of individual works, even one as superb as Head of a Statue of Amenemhat III.

Human scale and human dignity characterize Middle Kingdom art. This humanity applied to likenesses of people from many classes and ethnic groups, sometimes even foreigners from beyond the borders of Egypt. Individuality was no longer the exclusive domain of pharaohs and members of the royal family of Egypt.                                      .

Ancient Egypt Transformed displays many portrait statues or reliefs that confirm the heightened individualism of non-royal Egyptians during the Middle Egypt. Notably impressive in this respect is a side-by-side display of three statues from the Twelfth Dynasty, sculpted in quartzite. 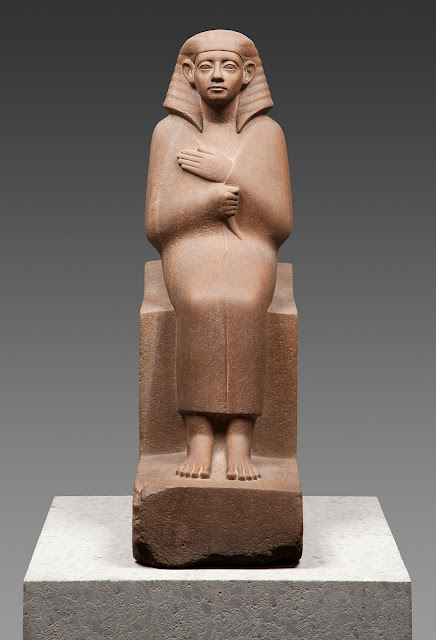 With a pleasing terracotta color and long-standing durability, quartzite was used by Egyptian artists for a wide variety of statues. But it was difficult to sculpt and had been reserved for royal portraits during the Old Kingdom.That changed in the more liberal atmosphere of the Middle Kingdom. These three statues depict “middle management” officials - a provincial mayor named Rehuankh from the British Museum, a priest named Amenemhetankh from the Louvre, and a court official, Nemtihotep, from the Ägyptisches Museum.

Each of these works was crafted with the same sensitivity and idealism formerly reserved for the portraits of Old Kingdom pharaohs. Statue of the Sealer Nemtihotep Seated rivals the idealization of Old Kingdom depictions of the pharaohs to a much great degree than the remarkable "warts and all" likeness of Senwosret III also on view. 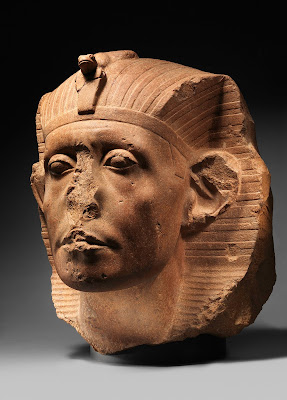 These striking portrait sculptures were made to be placed in private funerary chapels.
Previously, the pharaoh or his family had exclusive right to grave sites inscribed with the magical instructions of The Book of the Dead which enabled their souls to reach eternity. During  the last years of the Old Kingdom, high-ranking Egyptians began to practice the burial rituals of the pharaohs, often in secret or in distant border towns far from the pharaoh's palace officials.

With the onset of the Intermediate Period's turmoil, the people of Egypt focused on the state of their souls - as often happens in time of war or social disorder. 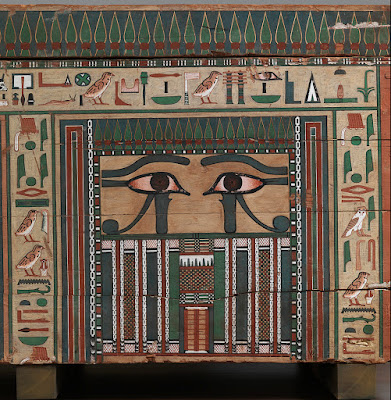 By the time that Mentuhotep II and Amenemhat I secured political unity, a full-scale religious revolution had occurred in the Middle Kingdom. This is one of the decisive moments in world history. A wide-spread population, yearning for meaning in this world and eternal life in the next, had grasped the means to achieve both.

In his excellent book, The Rise and Fall of Ancient Egypt, Toby Wilkinson described this shift in the social and religious world view of Middle Kingdom Egypt:

Earthly success and being well remembered after death were no longer enough. The hope of something better in the next world, of transfiguration and transformation, became paramount. Notions of what lay on the other side of death were elaborated, codified, and combined in ever more inventive formulations. In the process, the ancient Egyptians devised the key concepts of original sin, an underworld rife with dangers and demons, a final judgment before the great god, and the promise of a glorious resurrection. These concepts would echo through later civilizations and ultimately shape the Judeo-Christian tradition.

In the growing populism of Middle Kingdom religious practice, many who aspired to this "Afterlife for All" had to cut a few corners to get there. Many Middle Kingdom mummies were entombed with some of their internal organs left intact, causing early decay. The cost of elaborate tomb carvings of servants, animals and other comforts was often too great so that wooden models, delightful to modern eyes, were substituted.

An archeologist from the Metropolitan Museum, Herbert Winlock, made a sensational discovery in 1920. While excavating  a thoroughly looted tomb from the Middle Kingdom era, Winlock found a secret chamber that the ancient robbers had missed. Inside were the twenty grave models and two enchanting statues of servant women bringing food to the deceased. One of these was presented by the Egyptian government to the Metropolitan Museum of Art.

With a height of a little over three and half feet, the statue is obviously less than life- sized. But the servant or "estate figure" is a representation of fully realized human being. Moreover, she is clad in a beautiful dress decorated with a pattern of feathers. Dresses like this were worn by the goddesses Isis and Nephthys who protected the dead.


Is this servant woman a goddess like Isis? Or is she a serving woman blessed by Isis? Whatever the answer, Winlock discovered works of art that testify to the Middle Kingdom's religious revolution whereby human devotion and dignity have found a place in the workings of cosmological destiny.

Thanks to this outstanding Metropolitan Museum exhibit, we now have valuable insight into the Middle Kingdom with its huge accomplishments - and its demerits.These black marks have a troubling resonance to modern times. A string of hapless pharaohs, bureaucratic paralysis and escalating militarism brought about the fall of the Middle Kingdom and the onset of a second "Intermediate Period."

The legacy of the Middle Kingdom ultimately transcends its failures. The religious revolution of this period entered into the hearts, minds and souls of the people of Egypt. Its influence extended throughout the ancient world and via the Judeo-Christian scriptures affects us to the present day. 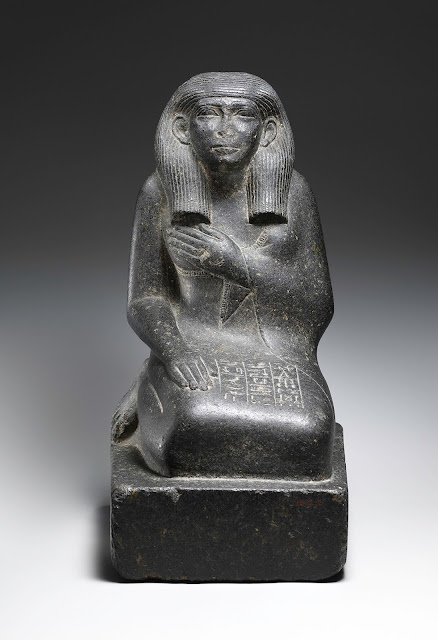 In The Story of Sinue, the great Middle Kingdom hero is exiled from Egypt and longs to return. Wandering in the desert, Sinue feels the presence of God. He exclaims that whether in the parched red land of the desert or in the fertile black land of the Nile Valley, the divine being is there.

"It is you," Sinue says to God, "who cover this horizon."

It is this insight, more precious than gold, that Middle Kingdom Egypt bequeathed to us.

Posted by Art Eyewitness at 9:39 AM