Made in the Americas:The New World Discovers Asia at Museum of Fine Arts, Boston 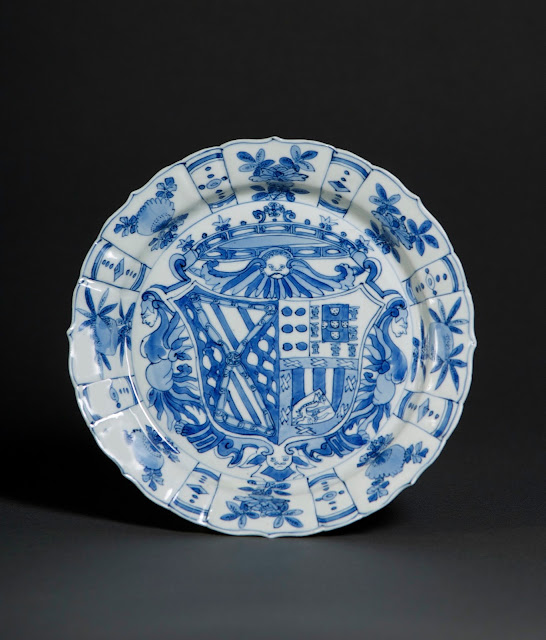 Made in the Americas: The New World Discovers Asia

Made in the Americas examines the visual arts and artisan crafts of the colonial era in the New World. The overarching theme, however, differs from the accustomed way of showing how European culture was transplanted to the recently discovered lands of the Americas.

The second part of the exhibit title - The New World Discovers Asia - supplies a key interpretive insight. The Boston art display examines the influence of long-distance trading by Western seafarers with Asia. The luxury goods brought back aboard their storm-lashed ships helped transform the way of life in the Spanish dominions of Mexico and Peru and the thirteen British colonies destined to form the United States in 1776.

Asian imports were embraced by the ruling elites of Europe's colonies in the Americas. One of the earliest works of art on view is a Chinese porcelain plate which appears as the introductory image of this review. In an amazing amalgam of Europe's feudal heraldry and Oriental aesthetics, the plate bears the coat of arms of the viceroy of Peru, García Hurtado de Mendoza (1535-1609).

Such precious objects also exerted a powerful influence by the peoples they ruled. The social transformation occurred in ways that were not initially apparent.

John Singleton Copley's portrait of Nicholas Boylston (1716-1771) shows exactly the sort of "merchant prince" who profited by the trade with Asia. Boylston’s import company, Green and Boylston, played a key role in clothing wealthy Bostonians with the rich textiles which he himself wore when painted by Copley. Boylston's firm also specialized in importing tea to the increasingly self-reliant British colonies. 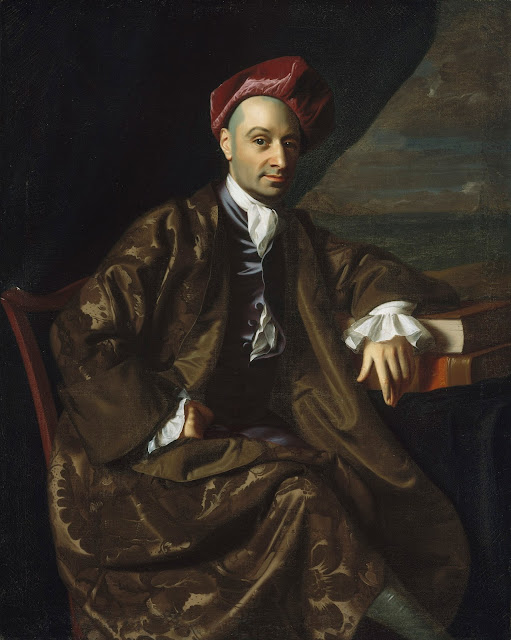 Politically conservative, Boylston refused to support the boycott of British goods during the tense years before the American Revolution. He was denounced by Patriot leader, Samuel Adams, as one of the "enemies of their country." Boylston's death in 1771 spared him from witnessing the destruction of his refined, gentlemanly way of life when Paul Revere called the Minutemen of Massachusetts to arms against the British in 1775.

The growing appetite for Asia's furniture and furnishings, spices and ceramics, fed the New World's desire for more.  As demand rose, so too did the desire to have these goods at prices that people less affluent than Boylston could afford. 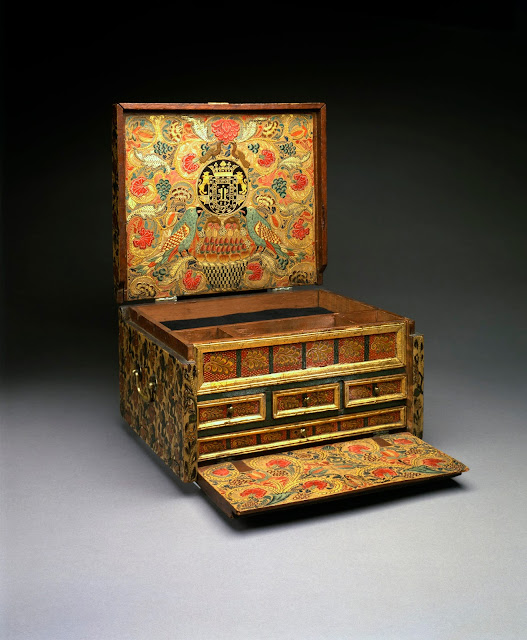 The populations of the British and Spanish colonies took matters into their own hands. They started marking versions of these exotic Asian imports for themselves. And once they succeeded in achieving a growing measure of economic self-sufficiency, the next step was to grasp after political independence.

The majority of the art treasures on view in the Boston exhibit exemplify this "can-do" American spirit. To maintain the Oriental allure of products made in the Americas, however, touches of faux Asian design known as chinoiserie were added. Motifs "in the Chinese taste" appeared on every imaginable object from fabrics and wall-paper to Queen Anne-style cabinets. 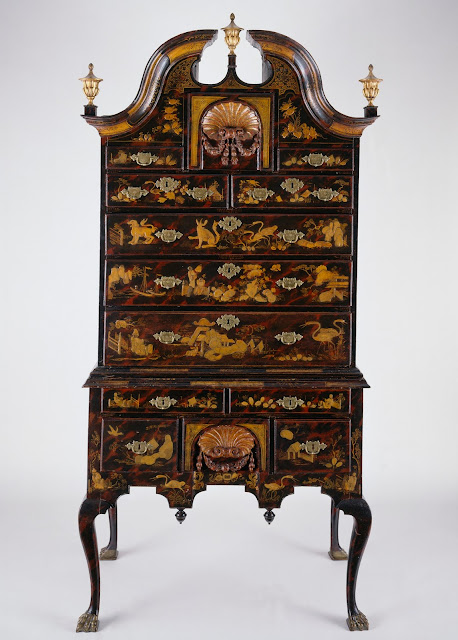 The great Boston furniture maker, John Pimm, created an exquisite high chest, during the 1730's, from black walnut and soft maple. It was then "japanned" with coats of a special varnish to make the surface look like Asian lacquer had been applied to it, with gilded Oriental figures to complete the illusion. 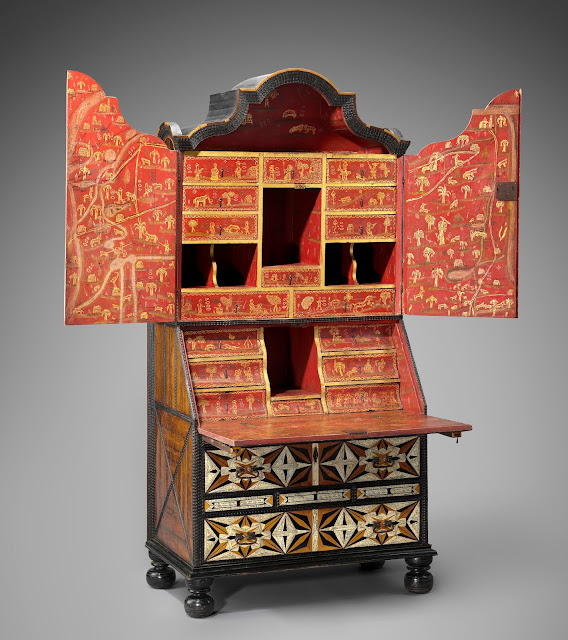 Another standout piece from the exhibition, a spectacular desk and bookcase from the mid-1700's which opens up to reveal a mythic realm in red and gold, was "Americas-made." It was created by Mexican craftsmen, rather than Chinese, as one would initially suspect.

This Asian influence of Asia on the creative energies of colonial America came about as a result of one of the most fantastic maritime ventures of world history. These were the voyages of ships known as the Manila Galleons.

The story begins with the epic expedition by a Spanish ship, the San Pedro, in 1565. That year, an Augustinian monk named Fray Andrés de Urdaneta (1498-1568) guided the San Pedro on a perilous voyage to discover a trade route from the Spanish colony of the Philippines to Mexico.

Urdaneta was a Basque sailor who had taken holy orders after surviving a disastrous earlier expedition. When King Philip II recalled Urdaneta to duty, the Basque sailor-monk put his experience to great use.

The San Pedro sailed from Cebu Island in the Philippines on June 1, 1565, carrying a cargo of precious cinnamon. Urdaneta, on board as navigator, boldly sailed into the uncharted waters of the North Pacific rather than set the vessel's course by the Equator to reach South America. Urdaneta followed a hunch that there were favorable trade winds in the North Pacific, just as there were in the North Atlantic. Urdaneta was correct and though most of the crew died on the 6,000 mile voyage across the Pacific, the San Pedro made landfall near Acapulco on October 8, 1565.

For nearly 250 years, the Manila galleons followed "Urdaneta's route" bringing spices, textiles and the coveted blue and white glazed porcelain that would be known as "China" in the West. To pay for these high-profile goods, the Manila galleons brought tons of silver to Asia, nearly a third of the vast haul mined by the Spanish during the colonial era in Mexico and modern-day Bolivia. This cargo went into the coffers of the Ming and Manchu emperors of China and the Samurai rulers of Japan. The bartered Asian goods were then transported by the Manila galleons to Acapulco for reshipment to Spain.

Two centuries and a half centuries later, the annual oceanic trek was still going strong. Then, in 1815, the frigate San Fernando de Magallanes sailed into Acapulco to find that Mexico had rebelled against the Spanish crown. The age of the Manila Galleon came to an abrupt end. 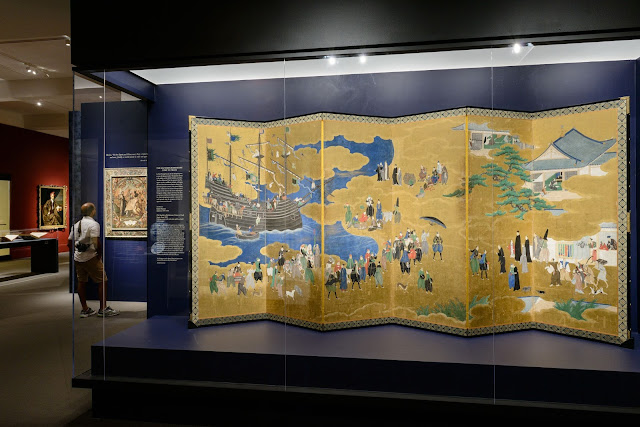 In the long years between the two voyages, the Asian imports brought back by the Manila galleons created a cultural ripple effect that reached many distant shores.

One of the first - and most remarkable - displays in the Boston exhibit directly evokes the Manila Galleon trade. Huge folding screens - byōbu ­- were brought from Japan to Mexico. Byōbu was transliterated as biombo in Spanish. The folding screens became so identified with the Hispanic­-speaking world that in Germany they were known as Spanische wand or Spanish walls.

Not only were biombos supremely practical in creating private space but they offered ample scope for a wide range of decorative schemes. Many were painted with New World genre scenes, Native-American weddings or feast day celebrations. 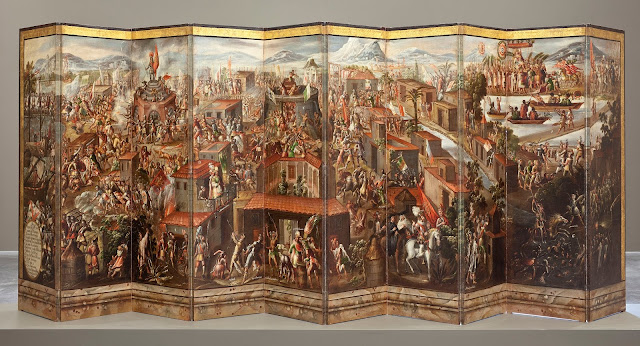 Unknown Artist, Biombo with Scenes of the Conquest of Mexico, Late 17th century

The biombo on view in the Boston exhibit, however, depicts various episodes of the conquest of Mexico by Hernan Cortes in 1519. It is a vast cinemascope affair, densely packed with dramatic incident. Appearing on the reverse side is a panorama of the rebuilt Mexico City at peace under the benign rule of the Spanish viceroys.

Like the 1950's movie epics, the biombo reveals more of the way that the story of Cortes was viewed when it was created in the 1600's than about the actual events a century and a half before. A scene showing armored-clad Spanish conquistadores plunging to their doom in the lake surrounding Mexico City evokes the human-cost of this horrific siege. But otherwise there is little indication of the staggering death toll that marked the overthrow of the Aztec Empire.

This romanticized view of the conquest of Mexico was no doubt influenced by the way that the Japanese Kano artists utilized the sweeping expanse of the byōbu screen to rework scenes from Japan's mythology or history.

Set against a golden backdrop, the byōbu on view in the MFA exhibit is a magnificent example of these cherished works. This byōbu depicts the moment when European seafarers - Nanbanjin or "southern barbarians" - first reached Japan in the 1540's. It is a marvelous work of art, a true masterpiece, but it never was intended to represent the actual event, fraught with suspicion and duplicity.

Another work of art related to the Manila Galleon trade testifies to the interaction of Asian and American craftsmen and the burgeoning self-expression among these "colonials."

Ivory carving ranked high among the accomplishments of artists in the Philippines. Stunning pieces of this delicate work were exported to Spain's colonies in the Americas. Often, the heads and hands of small figures were carved in ivory in the Philippines and then combined with wooden bodies carved in the New World. 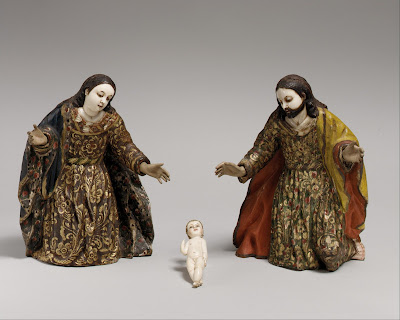 This heart-warming Nativity set from the collection of the Metropolitan Museum in New York is a beautiful example of this collaborative effort.

There are so many incredible works of art in Made in the Americas: The New World Discovers Asia that it is bewildering to study them in a single museum visit. It is a pleasure to note that when the exhibit concludes in Boston, it will be revived at the Winterthur Museum, near Wilmington, Delaware. The exhibit will be on view at Winterthur from March 26, 2016 to January 8, 2017.

For a final reflection, I have chosen an object to appreciate that outwardly is of little significance. Yet, it has a symbolical importance for the age of the Manila galleons and chinoiserie - and for the era that came afterward.

This is a blue-and-white tea bowl of the kind made at Puebla in Mexico and ceramic workshops throughout Europe. This reproduction of the real thing from China was made by a South Carolina potter, John Bartlam, and decorated in the finest chinoiserie style. 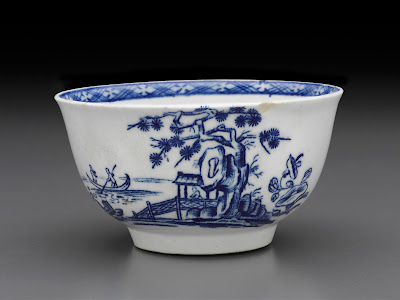 Bartlam's tea bowl was created around the time that tea importer Nicholas Boylston was denounced by Samuel Adams. One can only wonder what American colonials poured into Bartlam's china cups and bowls after the Boston Tea Party. Did they drink Oswego Tea, an all-American substitute?

Oswego Tea was an herbal concoction brewed by Native Americans and then made popular by a Philadelphia Quaker botanist with a similar sounding name to the South Carolina potter, John Bartram. While traveling in western New York as part of a delegation to meet with the chiefs of the Iroquois Confederacy in 1743, Bartram observed the Iroquois brewing a drink from the leaves of the Monarda didyma (Bee Balm) plant which he called Oswego Tea.

Thousands of Bartram's fellow colonials borrowed his recipe in 1773. This was the year that the American colonies rejected King George III's tax on tea and dumped the East India Company's shipment from China into Boston Harbor. Oswego Tea became the beverage of choice of American sons and daughters of Liberty.

This exquisite little tea bowl, then, is a fitting symbol of the social transformation that enabled people in the Americas to adapt well-traveled objects from Asia to suit their rising communities. In the process, the people in the American colonies created a self-reliant, democratic way of life.

Chinoiserie tea bowls and representative democracy were by-products of the cultural transformation so brilliantly explored in The New World Discovers Asia at the Boston Museum of Fine Arts. These too were "made in the Americas."

***
Text: Copyright of Ed Voves, all rights reserved
Images courtesy of the  Museum of Fine Arts, Boston, and the Metropolitan Museum of Art, New York City

Posted by Art Eyewitness at 7:33 PM