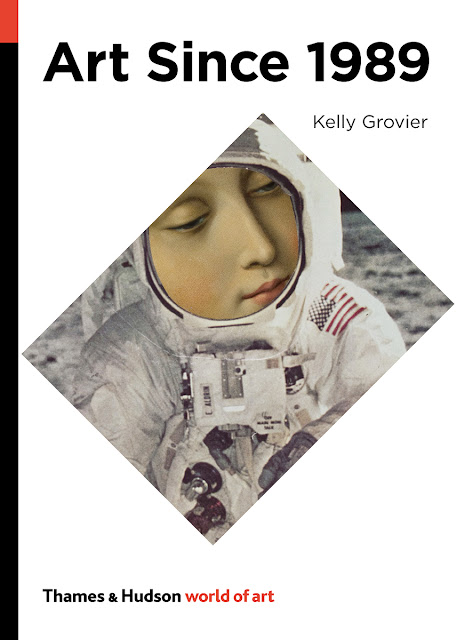 This year, one of my New Year's resolutions is to pay more attention to contemporary art and to achieve a greater degree of insight and empathy for the Artists of Today.

To be honest, that was on my list of New Year's resolutions for 2015 and also for 2014.
Thanks to the latest volume in Thames and Hudson's World of Art series, Art Since 1989, I have a good chance of keeping my resolution in 2016.

Art Since 1989 is not merely a worthy addition to this invaluable series. Written by Kelly Grovier, Art Since 1989 is one of the most intelligent and thoughtful books I have read in recent years. Brilliantly correlating political events and social trends with developments in the visual arts, this wide-ranging survey is rooted in the real world. Even as it probes visionary art theories, it keeps the reader's feet firmly planted on the ground.

Grovier is a notable poet and a perceptive scholar of the Romantic era of the late 1700's and early 1800's - also a tradition-shattering  period much like today.

The span of art history covered by Grovier's book begins in 1989 with the fall of the Berlin Wall. This momentous event were symbolized by the spectacular,Wrapped Reichstag, planned by Christo and Jeanne-Claude in 1971 to protest the division of Berlin by the Cold War. By the time permission was granted to place a vast, temporary curtain of aluminum-coated polypropylene fabric over the German parliament building in 1995, Germany was finally united. 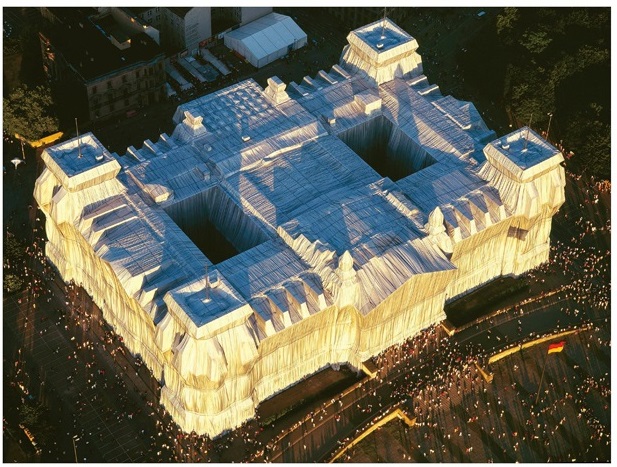 The Christo "wrap" was a mighty work, a human-constructed butterfly's chrysalis symbolizing reunification and harmony. But Wrapped Reichstag, as an appealing work of art, easily understood by people around the world, is the exception to the rule of contemporary art.

Grovier starts out by making an especially cogent point on the truly "shock of the new" aspect of contemporary art. We now live in an era which lacks a coherent ideology or a galvanizing "movement." There is in the art world of today no "overiding style, technique or attitude governing artistic practice..."

The art of the discredited Marxist regimes, Socialist Realism, is defunct. Hip "do your own thing" art is now a Madison Ave branding technique. Left-wing and right-wing have fallen, burying the central canons of art beneath the debris.

Art's revolutionary role has paradoxically taken a hit as well. Grovier writes, "Without an orthodoxy to resist, there can of course be no avant-garde - no overthrowing of an old order by a new one." 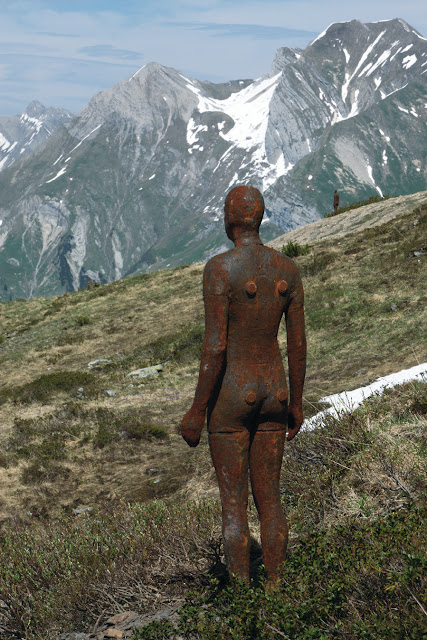 In a way, we are like the intriguing cast-iron figures of Antony Gormley's landscape installation, Horizon Field, watching to see who will pick up the scepter of King "Ism."

Grovier refrains from nominating any artists or art movements to fill the vacant throne. There is a note of irony here because Art Since 1989 recalls an earlier book by Grovier. This book documents selected works of contemporary art which Grovier contends are likely to stand the test of time. Also published by Thames & Hudson, 100 Works of Art That Will Define Our Age is a lavishly illustrated, big format volume with lively discussions of Grovier's chosen masterpieces. 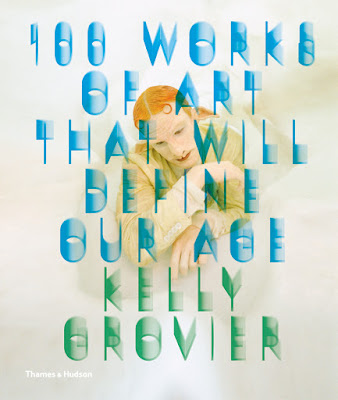 I was impressed with a number of Grovier's choices - notably Subodh Gupta's apocalyptic sculpture, Line of Control. Yet, Grovier's commentary on the "end of Art History," in terms similar to that noted above, argued against the idea that works of art made for a consumer society could outlive their creators' fifteen minutes of fame.

Art Since 1989, by contrast, succeeds in addressing any lingering doubts about the enduring value of contemporary art. Not only is it filled with challenging insights, but Grovier's new book imparts a sense of coherence and relevance to the study of present-day art that seemed lacking in 100 Works of Art That Will Define Our Age.

Grovier brilliantly makes the case that contemporary art legitimately addresses great themes of humanity and of our natural environment. He begins each of his chapters with cogent analysis of a major political event or scientific discovery, like the Hubble Space Telescope which was launched into orbit in 1990. Grovier then traces the effect of these developments on the creative achievements of contemporary artists.

In terms of political and social impact, the Feminist Movement and the global resurgence of Islam are among the most influential developments of recent times. These two dynamic forces came into prominence in the 1970's. Their cultural impact took a while to be felt as a generation of artists first absorbed and then reacted, pro or con, to the messages they impart.

In the case of Shirin Neshat, a talented Iranian-American photographer and film maker (b. 1957), that involved asserting herself in relation to both feminism and Islam. Neshat's family belonged to the Westernizing elite of Iran under the Shah. She was sent to study in the U.S, as feminism opened new creative venues for women and then as the radical form of Islam preached by the Ayatollah Khomeini suppressed many of the gains women had made in Iranian society since the Second World War.

Neshat eventually left Iran in 1975 to live in the U.S. Rebellious Silence, 1994, is perhaps Neshat's most famous photograph but it is a deeply ambivalent work. The Islamic veil, forced upon the female population of Iran by the male religious elite, is abhorrent to many in the West. Yet, the veil has actually been embraced by many Muslim women as a means of liberating them from being treated a sex-objects in a world where the degradation of women shows no sign of weakening. 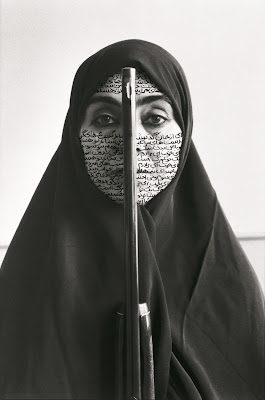 Likewise, the rifle may - or may not - symbolize the political subjugation of women. Given the position of the gun barrel, it is hard to say if the woman is embracing the weapon or have it thrust in her face.

The words of a poem on the theme of martyrdom, written by a woman poet (Tahereh Saffarzadeh) and superimposed on Neshat's face, are hard to gauge as well. They may express Neshat's empathy with the fortitude of the people of Iran during the horrendous war with Iraq, 1980-1988, when nearly a million Iranians were killed by bombs and weapons supplied by the Western powers to  the Iraqi army under Saddam Hussein.

What does Neshat say about Rebellious Silence?

"From the beginning I made a decision that this work was not going to be about me or my opinions on the subject," Neshat declared, "and that my position was going to be no position."

Far from being an evasive "cop-out" or a skillful repackaging of moral relativism, Neshat is encouraging, indeed forcing, the viewer, to directly engage with the content of her picture.

Neshat's reply, courageous and self-denying, establishes one of the central facets of contemporary art. The viewer, the gallery goer, is going to have to decide the meaning of the painting or the sculpture, the installation or the multi-media presentation - for themselves.

Given the deliberately challenging - and occasionally offensive - nature of much of contemporary art, it is not surprising that many people react negatively to the art scene of today. Grovier writes:

So dubious are many sectors of society of the integrity of the very enterprise of making contemporary art that the achievement of artists is either condescendingly diminished ('my five-year-old could have done that') or dismissed altogether as an embarrassingly failed attempt even to operate within the unruly rules of the genre: 'yes, but is it art?'

Grovier goes on to note that many contemporary artists deal with this social
stigmatization by emphasizing "the connections between scientific and aesthetic inquiry."
In some cases, this involves audacious initiatives using "cutting-edge" technology to express emotional and spiritual values. Doug Aitken's Mirror, installed on the facade of the Seattle Art Museum in 2013, uses a  computerized LED screen to show constantly changing images "synchronized to the changing tempo of the city itself."

Grovier also examines how contemporary artists are exploring the interfaces between art and other creative disciplines, literature and music. Two works by outstanding painters, Cy Twombly (1928-2011) and Christopher Le Brun (b.1951) show the process of  cultural "cross-pollination" at work. 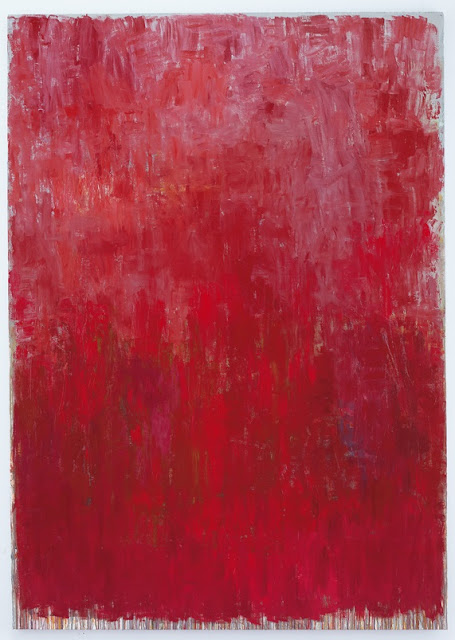 Le Brun, in his painting entitled Walton, evokes the 1954 opera, Troilus and Cressida, by Sir William Walton. Le Brun, who was elected as President of the Royal Academy in 2011, started this work by painting Walton's name and those of his protagonists on to the canvas. Layer upon layer of searing red paint were then applied, until the names were nearly obliterated.

"Nearly" is the operative word here. Somehow, the names of Walton and the two doomed lovers from ancient Troy manage to emerge from the sea of red. Culture, the creative expression of humankind, makes its presence felt, swimming to the surface like a survivor of a shipwreck.

Toward the end of his long career, Cy Twombly exhibited a quintet of wall-sized paintings of roses which lead the viewer's gaze to scrawled quotations from Rainier Maria Rilke's 1949 poem cycle, The Roses.

These awesome works of representation art, so at odds with much of Twombly's Abstractionism are simply dazzling. When Twombly's Rose paintings were first shown at the Gagosian Gallery, the walls vibrated with vivid color. Blooms of deep crimson resonated in the cavernous gallery along with gold, purple and midnight blue.

Image and word were united in Twombly's Rose paintings with an epic scope worthy of the great masters of the past. These are truly the work of a great master of the present age.

These sensational paintings are proof that John Keats' theory of "negative capability" is still worthy of consideration in the twenty-first century. Contemporary artists like Twombly, Le Brun, Doug Aitken and Shirin Neshat are indeed "capable of being in uncertainties, Mysteries, doubts, without any irritable reaching after fact & reason."

Looking at Twombly's Rose IV and the great works of art discussed in Art Since 1989 shows us that the basic truth of Keats' theories on creative achievement still holds true:

The excellence of every Art is its intensity, capable of making all disagreeables evaporate, from their being in close relationship with Beauty and Truth.

Posted by Art Eyewitness at 5:40 AM