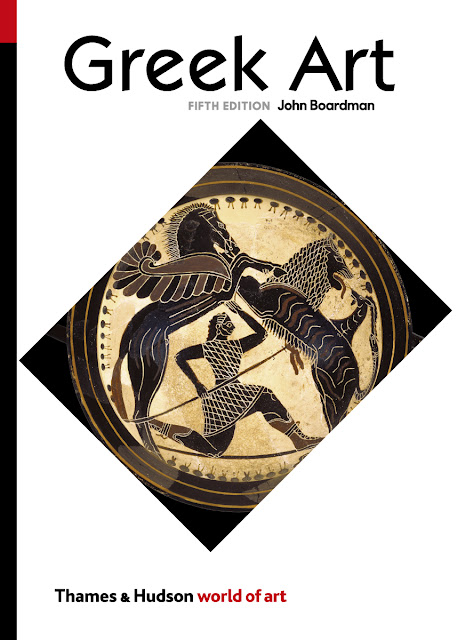 Greek Art by John Boardman is one of the most trusted and well-used books in my art library. I own three editions of this classic Thames & Hudson book. One of these copies is usually close to hand  - because the creative genius of the Greeks is never far from the scene of great art.

Thames and Hudson has just published the fifth edition of Greek Art. As Sir John Boardman will turn 90 in 2017, there is cause for celebrating the longevity of this outstanding scholar and of his most widely-read book. And of course, one should never miss an opportunity of emphasizing the continuing importance of the art of ancient Greece.

Boardman's book often sits on the shelf next to my battered copy of Kenneth Clark's Civilization. Greek art, declared Clark "was without doubt the most extraordinary creation in the whole of history, so complete, so convincing, so satisfying to the mind and the eye, that it lasted practically unchanged for over six hundred years."

This "ideal" art of Athens, created in the decades following the amazing victories of the Greeks over the mighty Persian Empire in 480 B.C., was carried by Alexander the Great as far as India and by the Romans to Britannia, the northernmost outpost of their empire. 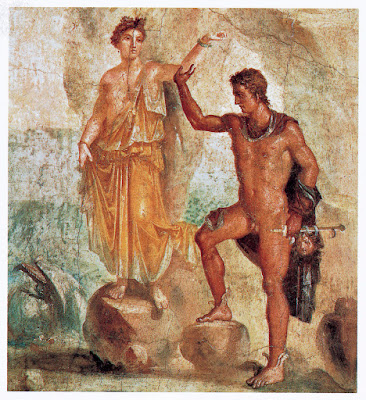 But Classical Greek art is only one "highlight" of the incredibly diverse and complex artistic heritage of the Greeks, the Hellenes as they called themselves. This is the story that Boardman tells so well in Greek Art.

Boardman begins with early Greek pottery, decorated with intricate geometric designs. Then comes the "Orientalizing" period which began around 750 B.C., the era "in which Greece was not the teacher, but the taught." This was followed by the Archaic age and its fantastic Kouros and Kore statues, the Greek "miracle" of the fifth century and the spread of Hellenistic art in the footsteps of Alexander. The art of each epoch is brilliantly analysed.

Greek art in Boardman's account begins in the "Dark Age" following the fall of Troy and the collapse of the Mycenaean kingdoms around 1200 B.C. The Mycenaeans, as Boardman notes, were Greek-speakers. Was Greek art a new civilization arising from the ashes of Pylos and Mycenae? Or did a "Renaissance" take place with artistic themes and techniques from the Mycenaens invigorating the culture of the new Greek city-states?

But the fact remains that Mycenaen art, which is itself but a provincial version of the arts of the non-Greek Minoans, is utterly different, both at first sight and in many of its principles, to that of Geometric Greece. For this reason our story begins within the not-so Dark Ages, with Greek artists working out afresh, and without the overwhelming incubus of the Minoan tradition to stifle them, art forms which satisfied their particular temperament, and out of which the classical tradition was to be born.

The earliest Greek art is wonderfully strange to behold. I particularly love the clay centaur from Lefkandi, dating to 900 B.C. Decorated with geometric motifs, it was unearthed at Lefkandi, one of the major archaeological "digs" of recent times. 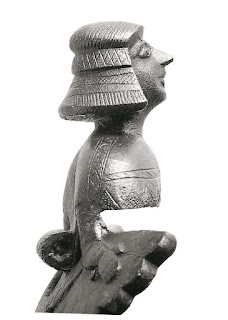 And then there is the bizarre winged-siren which once clung to the rim of a cauldron. With a wig that looks like Darth Vader's helmet, this siren was one of a group of figurines, a common decorative motif on great bronze pots throughout the Middle East.To the Greek mind, they no doubt symbolized the seductive, treacherous beings who nearly lured Odysseus to his doom.

Looking over the various editions of Boardman's book points to another evolutionary process, namely the changing perceptions of Greek art over the last 40 years. Boardman's own astute scholarship has played a major role in this process. But the discovery of "unclassical" statues and other artifacts in the last few decades has shown that Greek art was not quite "so satisfying to the mind and the eye" as Kenneth Clark once affirmed.

When Boardman's book first was published in 1964, a picture of the Marathon Ephebe (or Boy) graced the cover. This bronze statue of a young athlete was raised from the sea in 1925. It was probably en route to a villa of one of those lovers of Greek culture, the Romans, but was lost in a shipwreck. 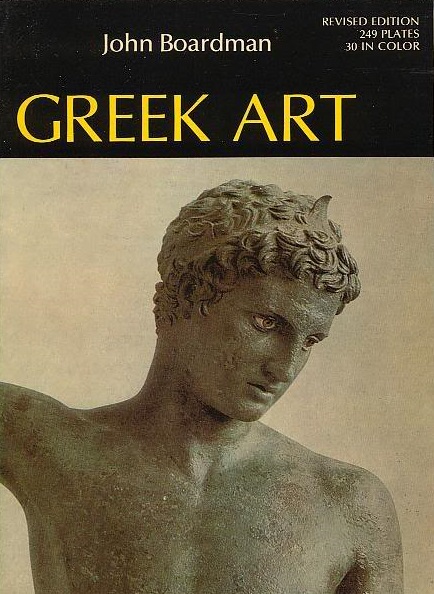 The Marathon Ephebe is the absolute embodiment of the "body beautiful" school of Greek art. It's not difficult to see why a rich Roman would desire such a treasure or that a book designer in 1964 decided to place it on the cover of an exciting new art history.

In 1972, an amateur scuba diver discovered two bronze statues from the fifth century under the sea near the "toe" of Italy. The Riace Bronzes depict mature men, possibly warriors from the Persian Wars or mythic heroes from the story of the Seven Against Thebes. Whatever the case, "A" and "B," as the Riace Bronzes are called, have none of the smooth-faced beauty of the Marathon Ephebe. They are tough "hombres" like the Spartans who defended the pass at Thermopylae.

If the Riace Bronzes disturb our conceptions of the "hallowed" nature of ancient art, there are many violent, unsettling themes in ancient art. The new edition of Greek Art has a two-page photo spread showing a marble sarcophagus carved with a bas relief of the sacrifice of Polyxena during the Trojan War. On the other side, there is a complementary bas relief showing dancing women in a religious festival. The sarcophagus was discovered in 1994 near the site of Troy in Turkey.

The Greeks, according to legend, avenged the death of Achilles by murdering the captive Trojan princess, Polyxena. The scene is quite graphically portrayed as one of the vengeful Greeks plunges a dagger into the young girl's throat.

Boardman does not comment in the text about this disgusting incident (to a modern-day American) or why it was paired with a scene of dancing women. The past "is a different country" and the Greeks saw the world in different ways than we do. 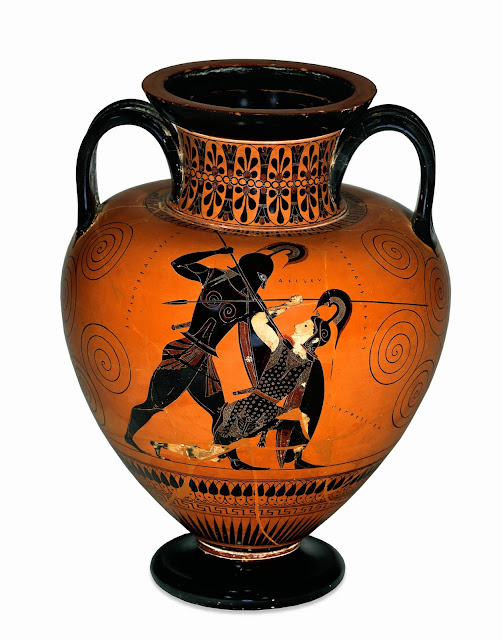 The cult of war appears in much of Greek art and scenes of violence against women are shown too. The two themes are combined in the famous black-figure amphora from the collection of the British Museum showing Achilles slaying the Amazon queen, Penthesilia, during the Trojan War. It is notable because we know the artist's name, Exekias. But what sticks in my mind is the cold, cruel killer's eye of Achilles as he spears Penthesilia.

The Polyxena Sarcophagus and the Achilles-Penthesilia Amphora date from the end of the Archaic Period, around 525 B.C. It is difficult to judge this period of Greek history, at least from a social standpoint.

There simply was so much in flux during the Archaic Period and no living historians to analyze the details, as Herodotus and Thucydides were later to do. Solon's law reforms, establishing democracy in Athens, 594 B.C., and the triumph of Spartan militarism, symbolized by the famous Battle of the Champions against Argos in 546, took place during the Archaic Period. But the place of art during this troubled time is hard to assess.

Base of a Kouros showing Gymnasium Scenes, Attica, c. 510 B.C.

Sensibly, Boardman focuses on the technical changes in art. But he notes the growing interest by vase painters in depicting satyrs. This was a sly way to comment on male misbehavior in the brazenly masculine society of Greece. And when the opportunity arises to trace important trends during later epochs, Boardman does not refrain from doing so.

A good example can be found in the discussion of nudity in art during the fourth century. Social conventions weakened as the power of the individual Greek city-states waned. Where women had always been sculpted clothed, as in the celebrated Peplos Kore, now there appeared the first instance of "deliberate sensuality in the rendering of women." Boardman explains:

At the end of the 5th century, Aphrodite could be shown in a closely clinging dress. Now she is naked, and so successful was Praxiteles in his cult statue of the goddess at Cnidus that (in later times) the marble was exhibited under peep-show conditions and was even the object of indecent assault.

When necessary, the text of Boardman's Greek Art has changed to accommodate the new discoveries. A close reading of the different editions, however, shows no major "about-face" reappraisals. Early in his career, Boardman took part in a number of archaeological excavations and was for three years assistant Director of the British School of Archaeology in Athens. Boardman has been a master of his subject for a very long time - and remains so today.

Yet, in his handling of the concluding paragraphs of Greek Art, it is fascinating to see how Boardman has grapples with the changes in how art history is viewed. Especially in the case of Greek art history, there is no longer the kind of consensus that enabled Kenneth Clark to speak so magisterially - and sensibly - in Civilization.

All three of the most recent editions of Greek Art show the same illustrations on the final pages. There is the drawing of a nude man and woman, perfectly proportioned according to Greek standards, that was sent into Deep Space aboard the Pioneer 10 spacecraft in 1972.

Albrect Durer also referred to the Greek concept of the nude to depict Adam and Eve in an engraving which is displayed next to the Pioneer 10 picture. Thus, as Boardman notes, Greek art provided the imagery and the spirit to create depictions of the Fall of Man and of humanity's Space Age Apotheosis.

The Second Revised edition, 1985, states the same basic message as the latest edition. It does so, however, in an almost "bible-thumping" manner. Boardman wrote that the Durer engraving and the Pioneer 10 drawing "both derive in pose and detail from that idealized and basically unrealistic view of man and his mate - nakedly modest in either covering or removing the body hair that draw attention to their shame - devised by the artists of Classical Greece." 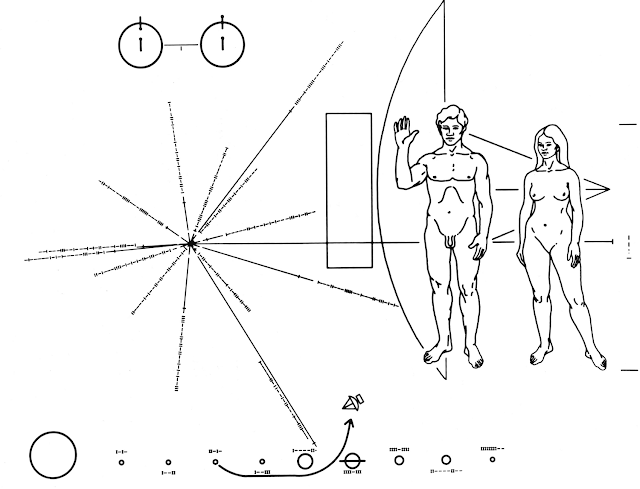 The 1996 and 2016 editions make no mention of naked modesty, body hair, etc. Instead, we simply read Boardman's moving tribute to the continuing influence of "the artists of Classical Greece." Could this be a recognition that people in the twenty-first century are now more accepting of overt sexuality? Is this in some way, a result of the cult status of the Riace Bronzes?

If we have grown used to the "full frontal" potency of "A" and "B," I think that Western Civilization will somehow endure.

I just hope and pray that we never come to accept the dehumanizing violence that is depicted on the Polyxena Sarcophagus. That is one aspect of the "glory that was Greece" that deserves no celebration.

Images Courtesy of Thames & Hudson, the British Museum and NASA

Cast bronze siren attachment from the rim of a cauldron, facing in. From Olympia, early 7th century BC. Width 15 cm. Olympia (inv. no. B 1690)

Posted by Art Eyewitness at 5:54 PM