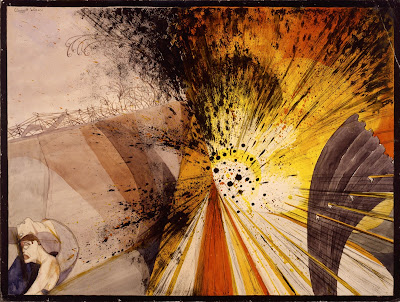 World War I and American Art

For the United States, the First World War began in April 1917 with flags and banners waving. The corpse-strewn conflict ended in November 1918 with the Stars and Stripes covering the coffins of countless Americans killed in battle.

The Pennsylvania Academy of the Fine Arts (PAFA) in Philadelphia has just opened a major exhibition, World War I and American Art. This revealing display of paintings, sculpture and propaganda posters investigates the role of art - and advertising - in wartime. The exhibit will later travel to the New York Historical Society and to the Frist Center in Nashville, Tennesee.

Art played a huge and controversial part in the war efforts of all the major belligerents between 1914 and 1918. The American experience of World War I followed in the footsteps of Great Britain, France, Germany and the rest of embattled Europe. What occurred in August 1914 was repeated in April 1917. 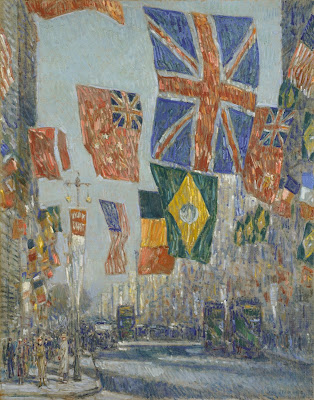 Images of drums and bugles, marching bands and inflammatory propaganda fill the opening galleries of the PAFA exhibit. And there are flags. Lots of flags, as in the brightly-hued, monotonous paintings of Childe Hassam.

The "Big Parade" was followed by massive, industrial-age slaughter. A little-known painting, The Devil's Vineyard, presents a view of "No Man's Land." This was the killing ground between the rival lines of trenches where futile, anonymous death befell millions. 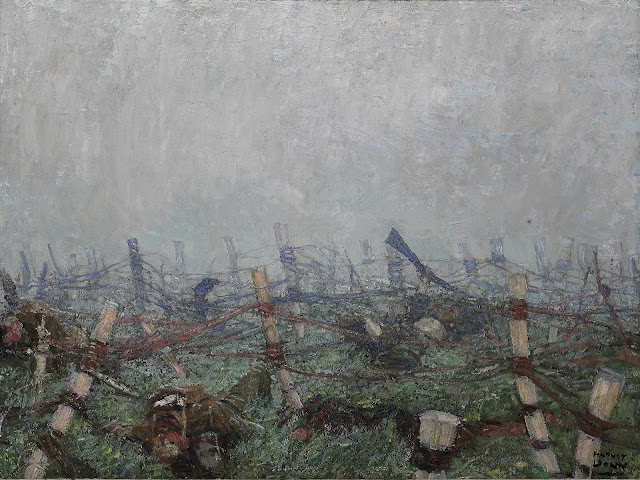 The British poet Wilfred Owen, who was killed in one of the last battles of the war, described the carnage in his unforgettable Anthem for Doomed Youth:

Under conditions like these, it took a lot of prodding to get the American people to join the Allied war effort. The key event in the propaganda campaign took place in May 1915 when a German submarine sank the British passenger liner, Lusitania, without warning. The death toll included 128 Americans, many being women and children.

The United States avoided war in 1915 when the Germans briefly suspended further submarine attacks made without prior warning. The damage to Germany's reputation was already done as can be see in the military recruitment poster which shows a Madonna-like mother and child drowning in the depths of the sea, victims of a U-Boat attack. 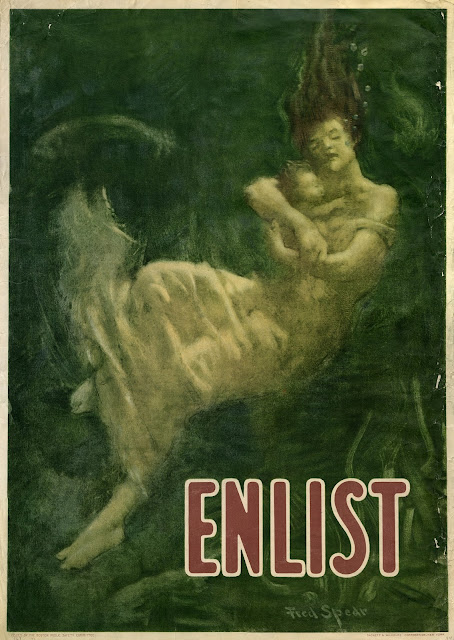 This poster by Fred Spears was commissioned, not by the United Stated government, but by a group called the Boston Committee of Public Safety. Where Americans were to enlist, given the continuing U.S. neutrality, the poster does not say. Many Americans did serve in France before 1917, some in the famed French flying squadron, the Lafayette Escadrille.

There was a strong counter-current of opinion against rushing to war, despite the Lusitania incident. William Randolph Hearst, the newspaper magnate who who helped engineer the war against Spain in 1898, opposed the U.S. joining the Allied camp in 1915 and tried to undermine support for Britain. Hearst's most talented cartoonist, Winsor McCay, was forbidden to publish anti-German illustrations in the Hearst publications.

McCay found a way to outmaneuver Hearst. McCay had created the pioneering animated cartoon, Gertie the Dinosaur, in 1914. On his own initiative and expense, McCay drew and produced an animated depiction of the sinking of the Lusitania. One of the most vivid images in McCay's account of the tragic disaster showed Spear's mother and child sinking to the bottom of the sea.

McCay's 12-minute animated film is on view in the PAFA exhibit. It is a sensational work, years of painstaking effort in the making. The Sinking of the Lusitania did not appear until 1918, after the U.S. had entered the war. Yet, it was a landmark in modern art and media culture.

Warfare, as experienced by American troops in France during 1917 and 1918, bore little resemblance to the jingoistic propaganda that had sounded the drumbeat to war.

Some of the most compelling images of combat were created by a battle-tested officer, Claggett Wilson (1887–1952). Wilson's graphic (and accurate) depictions of battle were later donated to the Smithsonian and forgotten until recently. With paintings like Flower of Death (the introductory image to this essay), Wilson depicted the war "Not as It Looks, but as It Feels and Sounds and Smells."

As powerful as Wilson's images of the war undoubtedly are, no work on view in the PAFA exhibit can compete with John Singer Sargent's Gassed. Sargent was an eyewitness to the terrible aftermath of an attack with deadly "mustard gas" on a British unit in 1918. Gassed is a tremendous painting, having lost none of its power.

Though some of victims of poison gas were only temporarily blinded, few ever recovered completely. Mustard gas burned the lungs and mucous membranes of its victims, as well as their eyes. Almost all who survived a gas attack suffered permanent - and painful - health problems. The brother of Georgia O'Keeffe never fully recovered from the effects of poison gas, which contributed to his death from Influenza after the war.

Sargent's Gassed, which was generously loaned by Britain's Imperial War Museum, is one of the great paintings of the Twentieth Century. Because Sargent worked in the time-honored tradition of Realism, Gassed has been somewhat undervalued in comparison with Picasso's Surrealist masterpiece, Guernica. But if you spend some time before this vast evocation of suffering and hope - the sun in Gassed is rising, rather than setting - you will experience a sense of transcendence and empathy that only comes from truly great art.

Sargent initially tried to remain aloof from the war, though he lived in England. In the spring of 1918, he went to France as an official War Artist, but struggled to find a theme worthy of his genius. Then, on Good Friday, March 29, 1918, a German atrocity claimed the life of Sargent's beloved niece. Rose-Marie Michel was killed by long-range German siege artillery which bombarded Paris. Rose-Marie Michel was a nurse tending blind soldiers, so her death found a resonance in the plight of the blinded soldiers in Gassed.

The story of how Sargent came to paint Gassed is wonderfully told in a recent book, published in 2014, John Singer Sargent and His Muse, written by Daniel Williman and Karen Corsano.

This brings us to one of the important themes of World War I and American Art.There has long been a theory that World War I made only a passing impact on American society, at least in comparison with the Civil War and the Second World War. The PAFA exhibit and the superb catalog that accompanies it completely dispels this falsehood.

By looking at the letters of Georgia O'Keeffe and the art work she created in reference to World War I, it is clear that she was emotionally consumed by interest in the war. O'Keeffe's well-founded anxiety about her brother, Alexis, and frustration about doing something meaningful in wartime energized her art. 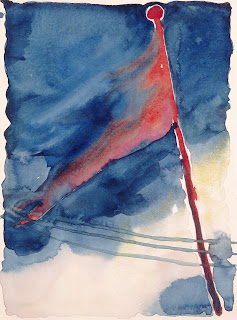 The blood red, midnight blue and cloudy white hues of O'Keeffe's The Flag are symbolical. Yet O'Keeffe's painting reaches a deeper level of reality than many purportedly realist
works could possibly achieve.

Another American artist of the period who was  molded by his experience of the war was Charles Burchfield. After graduating from art school in 1916, Burchfield faced the prospect of being drafted and sent to the Western Front. Like O'Keeffe, Burchfield was deeply affected with stress and anxiety. 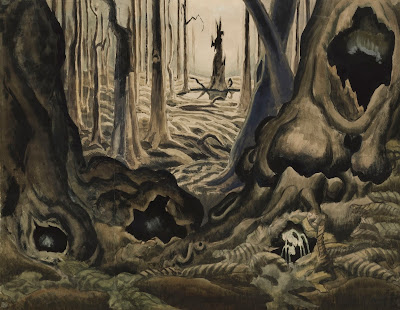 The emotional toll upon Burchfield is reflected in his classic landscape, The First Hepaticas. Painted in 1917, Burchfield makes a forest near his home look as though it had been hit by an artillery barrage. Flowers, the hepaticas of the title, wilt as if stricken by poison gas. World War I had come to America's doorstep.

Burchfield eventually was assigned to a unit designing camouflage for armored tanks. The the fighting ended before he was sent to the front. Yet, the haunted, brooding cloud of war never quite departed from Burchfield's art. We can trace the mystical elements in his later work back to the state of mind that influenced the creation of The First Hepaticas.

World War I and American Art is an outstanding exhibit which commendably includes numerous works dealing with the African-American experience during the conflict. Black soldiers like Horace Pippin fought a two-front war, against the Germans on the other side of No Man's Land and against racial intolerance at home. 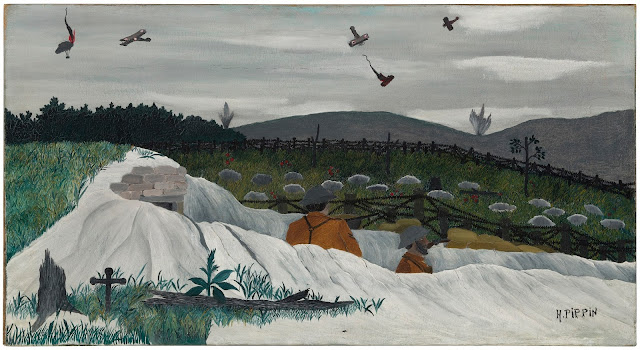 Pippin, Burchfield and Wilson survived the war but American fatalities were heavy. There were 53,402 combat deaths and 63,114 from disease, many from the dreaded Spanish Influenza epidemic. This occurred during the last months of the war and into 1919. An estimate of civilian deaths in the U.S. from the Spanish Influenza is around 500,000. Worldwide, the (misnamed) Spanish Influenza killed nearly 50 million people. This was far in excess of the estimated 17 million war dead. Many of the Spanish Influenza victims died because of wounds or privation caused by the war.

World War I and American Art ends on a somber note, as indeed it should. Despite heroic self-sacrifice, the War to End all Wars failed to bring peace. A sense of futility, a feeling that war would resume as soon as a new generation of cannon fodder came of age, pervaded the world during the 1920's and 1930's.

In 1928, John Steuart Curry began a painting to memorialize a friend, killed in the war ten years before. By the time he finished The Return of Private Davis from the Argonne in 1940, war had broken out again in Europe. Hitler was on the march and U-boats were sinking ships at a faster rate than during the First World War. 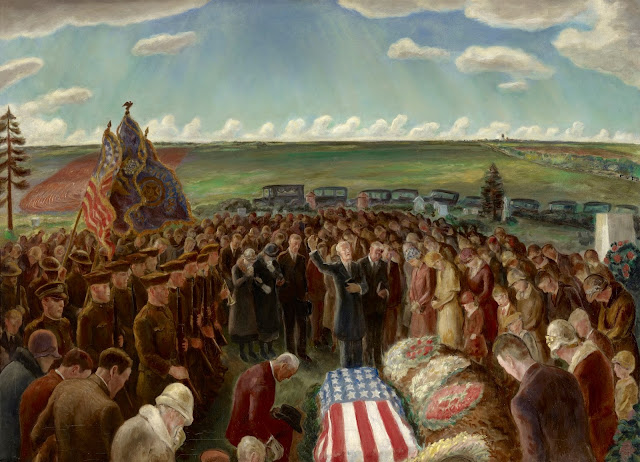 John Steuart Curry, The Return of Private Davis from the Argonne, 1928–40

The oil paint barely had time to dry on Curry's elegiac painting before American industry began to retool for arms production. A year later, on December 8, 1941, James Montgomery Flagg's famous "I Want YOU for the U.S. Army" poster was dusted-off to encourage Americans to fight a second War to End all Wars.

World War I and American Art at PAFA makes no overt effort to editorialize or extend the scope of the exhibition theme. But the maimed and the wounded, the gassed and shell-shocked look down on us from their picture frames. Their silent verdict is deafening.

***
Text: Copyright of Ed Voves, all rights reserved
Images courtesy of the Pennsylvania Academy of the Fine Arts