Art Eyewitness Looks at the Art Scene in 2016 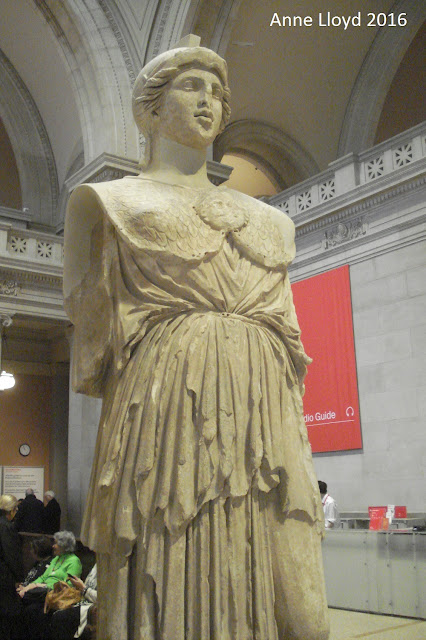 Reflections on the Art Scene during 2016

A few years following World War II, the British writer Rose Macaulay (1881-1958) pondered the vagaries of human imagination, "half of whose desire is to build up, while the other half smashes and levels to the earth."

These lines appeared in A Pleasure of Ruins, published in 1953. In this brilliant meditation on art and life, Macaulay surveyed the bittersweet experience of reflecting on the shattered remains of ancient civilizations. She also detailed the bizarre, chiefly 18th century British, mania for building artificial "ruins" or follies on country estates. If you could not travel to Rome to tour the Forum Romanum, then you could build your own version, smaller of course, in Sussex or Oxfordshire.

During the past year, I have had a number of "pleasure of ruins" moments while reviewing exhibitions for Art Eyewitness. 2016 was crowded with great exhibits, especially ones dealing with ancient times and modern war. All provided food for thought.

The Metropolitan Museum of Art showcased Pergamon and the Hellenistic Kingdoms of the Ancient World, a stunning appraisal of later Greek art between the conquests of Alexander and the rise of the Roman Empire.

A month before the Met's Pergamon exhibit previewed, the Onassis Cultural Center in New York City reopened its doors on March 24th, after being closed for renovation since the spring of 2012. The premier exhibit at the Onassis Center, Gods and Mortals at Olympus, looked at the course of Ancient Greek culture by focusing on the archaeological discoveries at the city of Dion in northern Greece overshadowed by the home of the gods on Mount Olympus.

In November, my wife Anne and I attended the press preview of the Met's exhibition, Masterworks: Unpacking Fashion, which I plan to review in coming weeks. 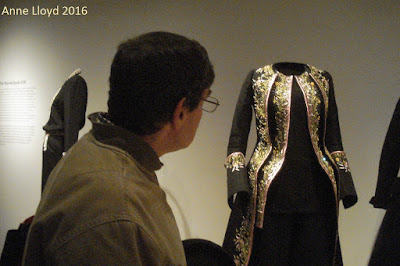 After leaving Masterworks, I was delighted to see that two of the monumental art works from the Pergamon exhibit remained on display in the lobby galleries of the Met. These are on extended loan from the Staatliche Museum in Berlin, which is being refurbished as the Onassis Cultural Center had been.

Anne took a magnificent photo of the fragmentary marble head of Apollo or Alexander. It is believed to have decorated the wall of the gymnasium of Pergamon. This city was the capital of the Greek dynasty which ruled much of what is now Turkey until the Romans marched in. The degree of skill which went into the carving of this monumental object needs to be emphasized because its very size is so striking that the artistry that went into its creation can easily be overlooked. 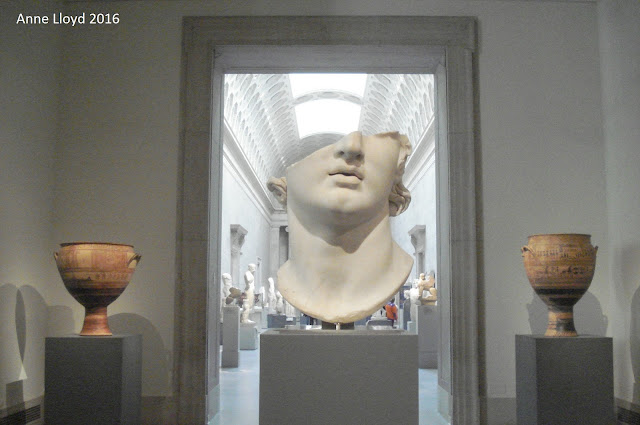 When I studied Anne's photo of the shattered head of Apollo/Alexander, I was immediately struck by the way the composition of her picture evokes paintings by Hubert Robert, the French eighteenth century painter who specialized in depictions of ruins, real and imagined.
The National Gallery of Art in Washington D.C. mounted a spectacular exhibit of the oeuvre of "Robert of the Ruins" during the summer of 2016. I saw it just before it closed and was especially impressed by Robert's fantastical depiction of the Louvre - in ruins.

Robert painted View of the Grande Galerie of the Louvre in Ruins in 1796, shortly after he had been released from prison during the French Revolution. Artists and scientists who had enjoyed the patronage of the Ancien Regime were held in suspicion by the Republican tribunals and Robert was lucky to escape with his head on his shoulders.

Robert's close shave with the Madame Guillotine coincided with the rampage of destruction that took place in France during the Revolution. It was not just the Bastille, hated symbol of Royal repression, that was destroyed but churches and sacred sites like St. Denis as well. Hubert Robert, View of the Grande Galerie of the Louvre in Ruins, 1796

The open vault of the ruined Louvre in Robert's painting so closely mirrors the curved ceiling of the Metropolitan's Ancient Greek galleries in Anne's photo that it causes me to cringe to contemplate these two images. Could the grim fantasy of Robert's painting actually occur to the Louvre, to the Met or one of our other beloved museums?

Given the on-going destruction of World Heritage sites like Palmyra in Syria by terrorist groups, the answer is - sadly - yes. And history shows that this is not just a contemporary phenomenon. The devastation of World War Two included a number of terrible cultural losses. The cloisters of Camposanto Cemetery in Pisa, for instance, were hit by Allied bombs in 1944 resulting in the destruction of some of the most important frescoes from the early Renaissance.

The hand of Father Time is the ultimate and inevitable curator of Macaulay's "pleasure of ruins." Occasionally, what seems lost forever is rediscovered. Around 800 A.D., two cities on Nile delta in Egypt, Thonis-Heracleion and Canopus, were lost to erosion and the encroachment of the Mediterranean Sea. 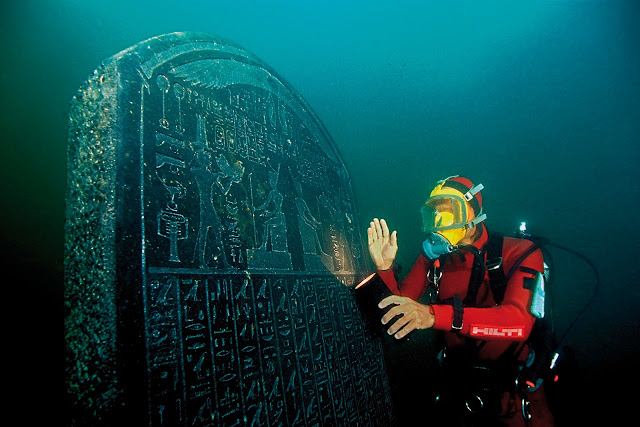 Christoph Gerigk, Franck Goddio during the excavation of the Stele of Nectanebo I

Artifacts are now emerging from these cities, one populated by Greek immigrants, the other - Canopis - a major Egyptian religious site. Beginning in the 1990's, a major underwater archaeological campaign has recovered a trove of statues, cult images and everyday objects abandoned to the rising tides over thousand years ago.

In May, Anne and I visited the British Museum to see an unforgettable exhibit of these works of art and daily life, Sunken Cities: Egypt's Lost Worlds. Incredible images of Franck Goddio and his team of divers, excavating treasures from beneath the waves of Aboukir Bay, were matched with the actual objects. Whether it was the imposing Stele of Pharaoh Nectanebo I (378-362 BC) or an exquisite statue of the god Osiris, the works on display in Sunken Cities were profoundly moving. 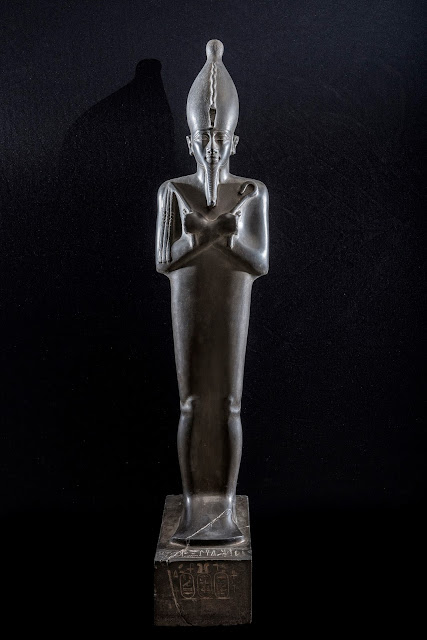 The special nature of the Sunken Cities exhibit was reinforced by the fact that Anne and I nearly missed our chance to see it. We had tickets for the opening day of the exhibit but a protest by Green Peace over the sponsorship of the exhibit by British Petroleum nearly derailed our plans. The British Museum staff rose to the challenge and we were able to visit the exhibit next day.

However well-meaning, the Green Peace protesters might have been better advised to encourage people to see the Sunken Cities exhibit than to prevent them from getting into the British Museum. If there is a more prescient warning of the dangers of Global Warming than Sunken Cities, I'll be very much surprised.

Sunken Cities also highlighted the special relationship of Greeks and Egyptians during ancient times.  These two ethnic groups generally lived in harmony. The tremendous cultural heritage of Egypt influenced Greek artistic expression while the vigor and intellectual achievements of the Greeks supplied an infusion of vitality to Egypt.

The dynamism of Ancient Greece was very much in evidence in the exhibit,The Greeks: Agamemnon to Alexander the Great. Drawn from the collections of Greek museums, it traced the entire evolution of Greek culture from prehistory to Alexander's empire. 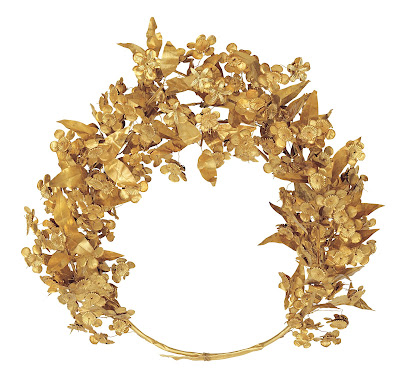 This traveling exhibition displayed striking archaeological finds like the golden myrtle wreath discovered at the royal tombs of Macedon. It is thought to have been worn by Queen Meda, the fifth wife of Philip II of Macedon, father of Alexander.

It was another work of Greek art dealing with a crown that deeply impressed me when I saw Agamemnon to Alexander at its final stop, the National Geographic Museum in Washington D.C. Carved from marble, this striking work from the fifth century B.C. is entitled Votive Relief of a Youth Crowning Himself. It was discovered at Sounion near Athens. 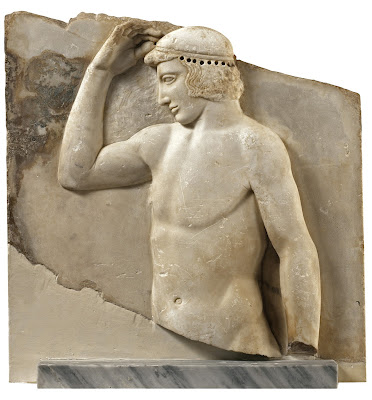 
This bas relief, created in the austere "Severe" style, shows a victorious athlete placing an olive crown on his own head. It is a self-confident act, evoking the triumphant emotions of the Greeks following their defeat of mighty Persia in 480-479.

War, however, begets more war. The victories of Athens and Sparta over the Persians planted the seeds of the self-destructive battles they soon began to wage against each other. Amid all of the wonderful 2016 exhibits which I saw, several had military themes which left unsettled feelings and unanswered questions in my mind.

The Frick Collection mounted Watteau's Soldiers, a small but brilliant display of paintings and sketches by the least warlike artist imaginable, Antoine Watteau (1684-1721). 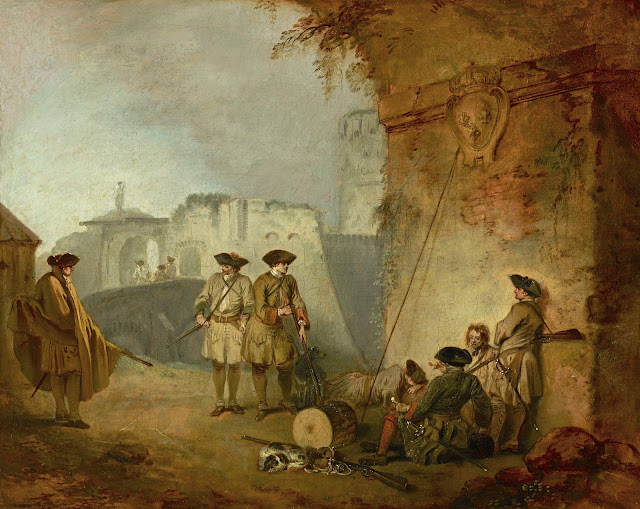 Watteau was born in Valenciennes, on the border of France and Belgium. This was one of the most fought-over regions of Europe. Watteau's home turf provided him with the subjects for scenes utterly different from his scenes of wistful romance. Tired, dispirited troops populate Watteau's paintings and sketches, their once-smart uniforms now tattered and dingy gray.

In November, the Pennsylvania Academy of the Fine Arts opened World War I and American Art. In May 2017, this searing, disquieting exhibit will travel to the New-York Historical Society, and then on to the Frist Center for the Visual Arts in Nashville during the autumn. Seldom has the direct relationship between propaganda and the destructiveness of war been so convincingly presented. 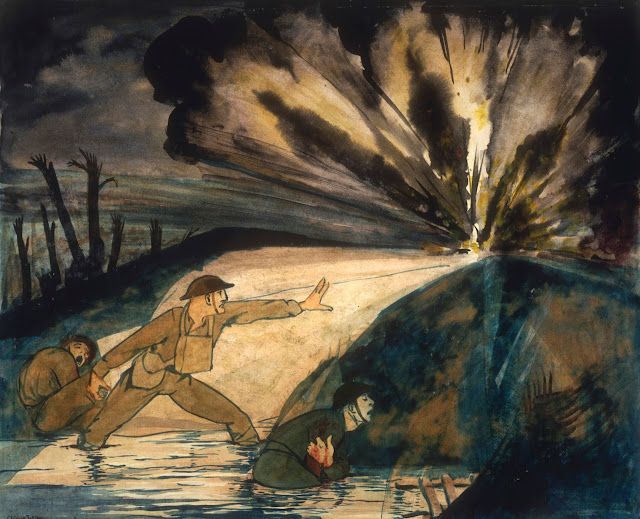 The menacing apparitions emerging from the detonating shells seem to be advancing on the embattled infantrymen in Clagett Wilson's Front Line Stuff. Clagett Wilson (1887-1952) served with the U.S. Marines in the thick of the 1918 campaign. He painted this watercolor shortly after the Armistice. It is an accurate depiction  of battlefield conditions but also of the psychotic state inflicted on the minds of the survivors.

Clagett Wilson went on to design Broadway theatrical sets. His World War I watercolors were forgotten and then rediscovered in the Smithsonian archives. The past yields both lost treasures and haunted images.

From the foregoing, you might derive the idea that 2016 was a year of doom and gloom. The art scene, however, provided much to be confident about and worthy of gratitude. 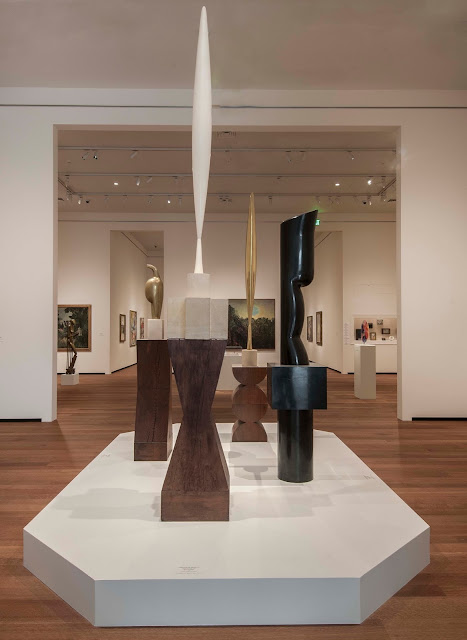 The East Building of the National Gallery of Art was reopened in September with a brilliant configuration of the Modern collection at the NGA. The role of women in the arts was championed by sensational Metropolitan Museum exhibits on Elizabeth Vigée Le Brun and Diane Arbus. The Philadelphia Museum of Art presented fabulous exhibits of Pop Art, the art of Africa and the Mexican Renaissance. Ruins were nowhere in evidence.

If I were forced to pick one image to evoke 2016, it would be the portrait of Charlotte Brontë  by George Richmond. This stunning, truly iconic work anchored the phenomenal exhibit, Charlotte Brontë: An Independent Will, at the The Morgan Library and Museum. 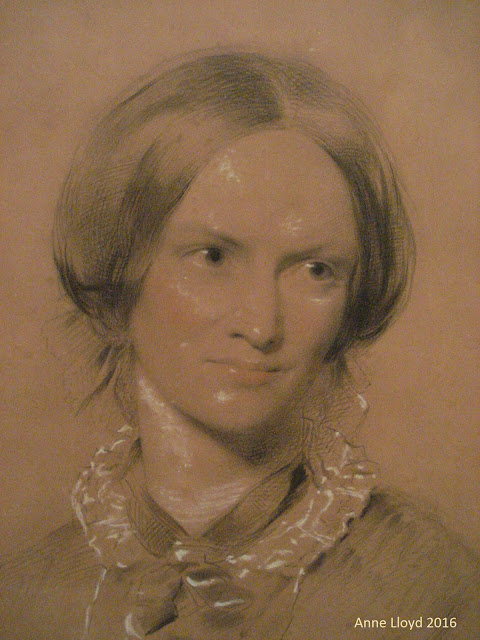 A couple days after Christmas, Anne and I went back to the Morgan for a last look at this exhibit. The Richmond Portrait fairly glowed with the life force of Charlotte Brontë.
Melancholy spirits may choose to meditate on the "pleasure of ruins." But when you look into the eyes of Charlotte Brontë in the Richmond Portrait, you are struck and inspired by the vitality of the human soul.

Ruins collapse and human bodies age, wither and finally perish. The human soul, when possessed of unquenchable spirit such as Charlotte Brontë had in abundance, endures.