I’m Nobody! Who are you? The Life and Poetry of Emily Dickinson at the Morgan Library 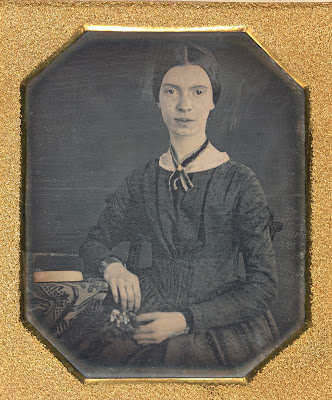 I’m Nobody! Who are you? The Life and Poetry of Emily Dickinson

"'Hope' is the thing with feathers," Emily Dickinson wrote, "That perches in the soul..."

Dickinson (1830-86) is the "solitary" genius of American literature. Like the unabashed little bird in this much-loved poem, Dickinson composed her verses amid the storm of America's Civil War and of her own personal anguish.

A thoughtful, brilliantly curated exhibition at the Morgan Library and Museum considers the life of Emily Dickinson from a slightly different vantage point from the received wisdom about her.

The exhibit takes its title from another of Dickinson's poems, I’m Nobody! Who are you? The Life and Poetry of Emily Dickinson. The exhibit shows that Dickinson was not quiet so reclusive, so remote or withdrawn from society as earlier biographers have maintained.

The "solitary" nature of Dickinson's creative achievement was not the result of heightened individualism but rather of a profound inward focus. Dickinson nurtured insights and aspirations, sentiments and experiences with sublimated energy. This quiet, yet deliberate, cultivation flowered into 1,789 poems, some of the greatest ever written by an American poet.

Emily Dickinson may have written these poems anonymously but she was certainly a "somebody" - even though she did not want to proclaim it like a frog in an "admiring" bog.

Dickinson had an excellent education, was well-read and was a gifted musician. She was linked to a network of kindred souls - intelligent, vivacious relatives, friends and schoolmates. Thanks to her family's role in the administration of Amherst College, Dickinson was also exposed to the forward-thinking culture and contentious social issues of her day.

Dickinson was a classmate of Helen Hunt Jackson, the courageous advocate of Native American rights. Jackson encouraged, indeed prodded, Dickinson into publishing a poem in a volume called A Masque of Poets (1878). Dickinson's other literary advisers - and friends - were the crusading editor, Samuel Bowles, and Thomas Wentworth Higginson, staunch Abolitionist and Civil War hero. 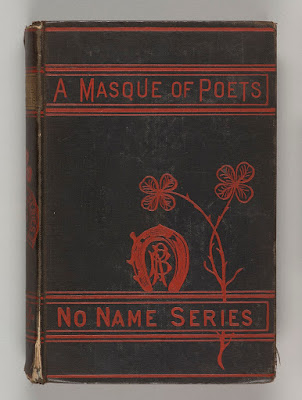 A Masque of Poets Including Guy Vernon, a Novelette in Verse, 1878

Success is Counted Sweetest was the poem contributed by Dickinson to a A Masque of Poets. Amazingly, this work, with its theme of dying soldiers and the bitter taste of defeat, was originally written in 1859, two years before the opening shots of the Civil War. Today, we would likely say that Dickinson was "channeling" when she wrote "Success." But in the nineteenth century, a more appropriate word was used. Prophecy.

It is difficult to evoke or define prophecy in terms of a museum exhibition. So the Morgan's display, organized with the help of Amherst College and Harvard University, necessarily emphasizes Dickinson's life and times. 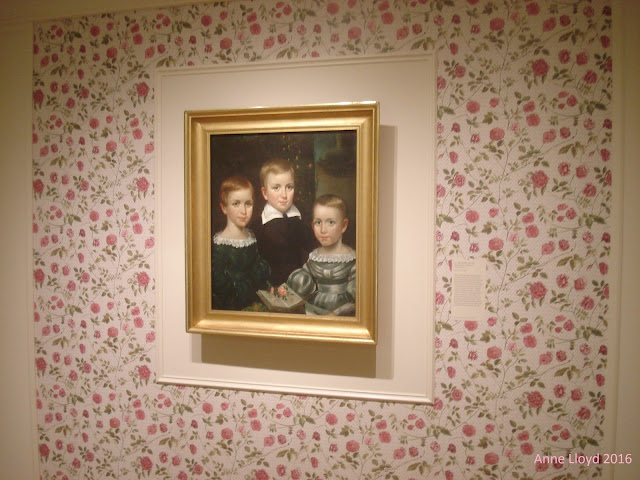 Anne Lloyd, Gallery view of I’m Nobody! Who are you? at the Morgan Library

Upon entering the exhibit, visitors are presented with the very image of New England gentility. The childhood portrait of Emily Dickinson, her brother Austin and her sister, Lavinia, is set against a wall covered with flowery wallpaper. This design was recreated from samples of the actual wallpaper recovered during renovation of the Dickinson home. 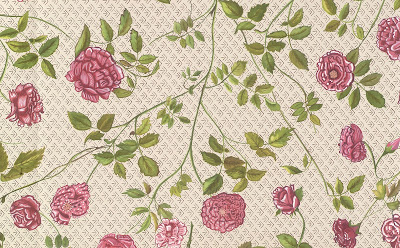 Wallpaper in Emily Dickinson’s bedroom in Amherst, recreated at the Morgan Library.

The portrait, painted by a regional artist, Otis Allen Bullard around 1840, would excite little interest today, but for the fact that the youthful, auburn-haired Dickinson and her siblings posed for it. 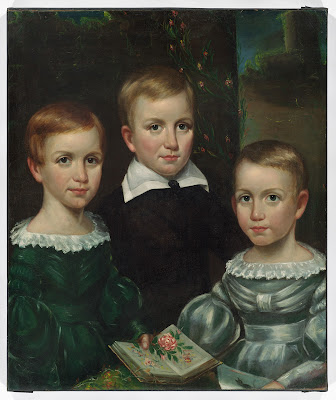 Significantly, Dickinson is holding a small book and a flower in the portrait by Bullard. During her childhood, Dickinson collected flower and plant samples which she pressed onto the pages of a herbarium.

The Bullard portrait and the example of a herbarium from the era - Dickinson's actual one is too delicate to leave Harvard's library - exemplify the proper, high-toned world of Dickinson's childhood, the world she both evoked and rebelled against in her poetry. 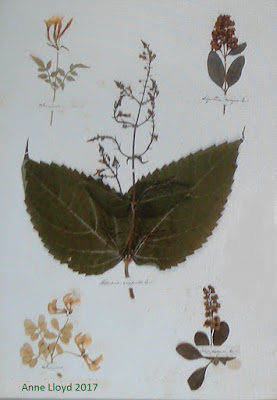 Most of the visually-stimulating objects in the exhibition reflect the moral certainties of the America into which Dickinson was born. Liberty there was - 1776 was still a living memory - but the Puritanical discipline and restraint of the New England Way was still in force, certainly in towns like Amherst, Massachusetts.

The cut paper silhouette of Dickinson, dated to 1845, the Stereoscope card photo of students at Mount Holyoke College where Dickinson went to school and the lock of her hair that Dickinson sent to a friend in 1853 - are all talismans of a society based on certitude and sentimentality.

Rectitude, responsibility and intimacy are so well represented in the exhibition that the converse - Dickinson's rebelliousness - is palpable even with the absence of documentary evidence. 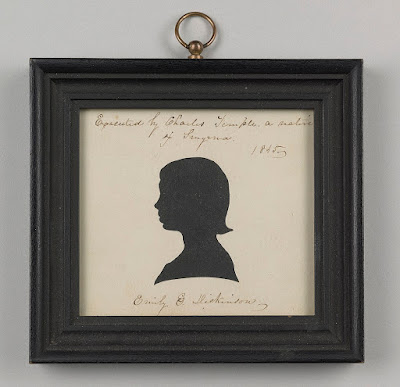 At some point in the  early 1850's, as she reached adulthood, Dickinson refused to continue to attend Sunday religious service. She also balked at proclaiming her Christian faith at a public revival meeting and began to refrain from visiting or writing close friends.

This withdrawal extended even to her confidante, Abiah Root (1830-1915). A surviving letter to Root dated to 1846, reveals that Dickinson felt that "I have not yet made my peace with God" even at that early stage of her life.

What is particularly significant about the 1846 date is that it took place during a period when a series of deaths of friends and teachers began to undermine Dickinson's acceptance of the image of God as a personal savior. These tragic early deaths also contradicted the widespread idea that the natural world was a benign environment testifying to God's grace.

As Dickinson disengaged from those around her, she described or commented upon the process, but often in cryptic or contradictory terms. In 1873, she wrote a two line verse on a music program.

It is clear that Dickinson's personal rebellion was not inherited, though a strain of Yankee contrariness may have  played its part. Rather it was based upon experience, "acquired" in her confrontation with death.

Mortality, as the theme of some of her greatest poems, made its debut in 1844. In that year, the young Dickinson stood at the deathbed of her fifteen-year old friend and cousin, Sophia Holland. Dickinson, was so distraught that she had to be sent to stay with relatives in Boston in order to recuperate. But part of her emotions never healed. Dickinson wrote of the experience, "it seemed to me I should die too if I could not be permitted to watch over her or even look at her face."

Almost every year thereafter brought some sort of challenging loss. But it was not always death's hand that did the deed. In 1853, one of Dickinson's closest friends, Susan Gilbert became engaged to Austin Dickinson, her brother. Their friendship continued - one of the most vital relationships in Dickinson's life - but there were differences and difficulties that contributed to Dickinson's increasing isolation.

In September 1861, another emotional crisis occurred, this time based upon an unknown relationship. Following this, Dickinson launched into one of her greatest creative periods. Over 800 poems were written during the Civil War years.

Dickinson wrote on whatever piece of paper was at hand, as noted with the music program for the two-lined Of our deepest delights. The Morgan exhibit provides numerous examples of Dickinson's poems and letters in all their variety. 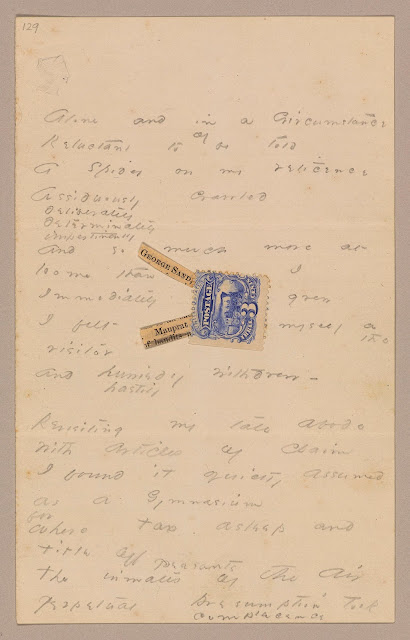 While some of the poems were hastily scrawled, Dickinson went to great lengths to write "fair copies." Some were were decorated, collage-style, like Alone and in a circumstance.
The names of “George Sand” and “Mauprat” were clipped from the May 1870 issue of Harper’s Monthly, and pasted to the sheet of paper. A profile of Athena or Lady Liberty was embossed on the paper and a three-cent postage stamp affixed to it.

There is some scholarly speculation that the stamp, which bears the image of a railroad locomotive, may refer to the poet's father. Edward Dickinson was a dedicated proponent of railroad development. One would have thought that the poem I like to see it lap the miles (1862) would have served as a better vehicle to acknowledge the train enthusiast, Edward Dickinson, than the spider-haunted Alone and in a circumstance. Emily Dickinson's poems have levels of subtle meaning that we may never penetrate.

The Morgan exhibit also displays examples of the hand-sewn books, called fascicles, that Dickinson made to preserve her poems. Audio stations enable visitors to comprehend the various draft states of twenty-four of Dickinson's poems.

Effort is also made to provide an overview of Dickinson's legacy and the effort involved in bringing Dickinson's poems to publication after her death.

Mabel Loomis Todd, was entrusted with the editorship of Dickinson's poems by Lavinia, Dickinson's sister. Todd was assisted by Dickinson's mentor, Thomas Wentworth Higginson. But their diligent, devoted work has been tainted to a certain degree by the fact that Todd, who was married to an Amherst professor, was Austin Dickinson's mistress. Despite her affection for Austin, Emily Dickinson refused to meet Todd, leaving the room whenever Todd visited the Dickinson home.

This bizarre twist to the story of Emily Dickinson sounds like the plot of an Edith Wharton novel and is best kept to a minimum in an exhibition such as the Morgan is presenting. This indeed was the wise decision of the exhibit curators.

Fortunately, I’m Nobody! Who are you? concludes on a high note, though a speculative one. 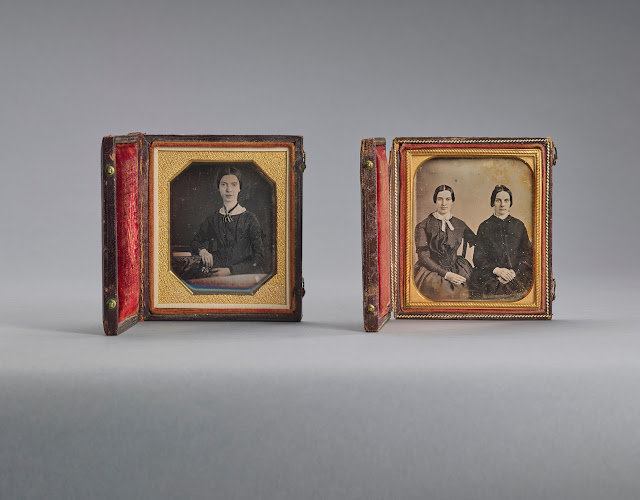 A daguerreotype, dated to around 1859, was recently discovered showing  two unidentified women. With a high of degree of certainty, the woman on the right is likely Kate Scott Turner, a known friend of Dickinson.

The woman on the left... Emily Dickinson...?

When you compare the only authenticated photograph of Emily Dickinson, the famous daguerreotype from 1847, with the 1859 photo, the temptation is either to accept or deny the 1859 image out of hand.

When I look at this picture, I am reminded of a remark that Emily Dickinson's niece, Martha Dickinson Bianchi, made about her aunt:  “She was not daily bread. She was stardust."

A Masque of Poets Including Guy Vernon, a Novelette in Verse, Boston: Roberts Brothers, 1878. The Morgan Library & Museum, Bequest of Gordon N. Ray, 1987.

Anne Lloyd, Photo (2017), Gallery view of I’m Nobody! Who are you? The Life and Poetry of Emily Dickinson. Exhibit at the Morgan Library and Museum, New York City, January 20 through May 21, 2017.

Reconstructed wallpaper from Emily Dickinson’s bedroom in Amherst, displayed at
the Morgan. Photography by Janny Chiu.

Anne Lloyd, Photo (2017) of the first page (facsimile) of Emily Dickinson's herbarium. The original is preserved at Harvard's Houghton Library, MS Am 1118.11.