Frédéric Bazille and the the Birth of Impressionism at the National Gallery of Art, Washington D.C. 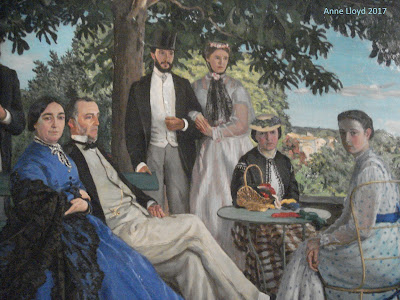 Frédéric Bazille and the the Birth of Impressionism

The prologue to the 1948 film version of Hamlet, directed by Laurence Olivier, concludes with a controversial assertion. "This is the tragedy of a man who could not make up his mind."

This line of cinematic psychoanalysis flashed into my mind as I considered the art of Frédéric Bazille (1841-1870). Bazille is the guiding spirit of an excellent new exhibition at the National Gallery of Art in Washington D.C. The exhibit is partly biographical, as well as an inquiry into the origins of Impressionism.

On the surface, Bazille was not a Hamlet-figure. Affable and charming, Bazille was generous in support of his less affluent friends, Claude Monet and Pierre-Auguste Renoir. Berthe Morisot called him "Big" Bazille and his tall, slightly-stooping frame figures in a number of pivotal early Impressionist works, several of which are on view in the  National Gallery exhibit. 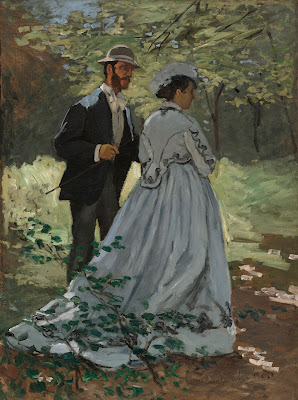 "Big" Bazille was gifted, intelligent, loved by his devoted family and highly-regarded by friends and colleagues in the rising art scene of Paris in the 1860's. Then the upward curve of his life suddenly plunged straight-down into death and near oblivion in 1870.

The immediate cause of death was a German bullet, which struck Bazille during the Franco-Prussian War. But the evidence of his art reveals conflicted emotions and an anxious search for meaning in his life. This led him - fatally - to enlist in the war effort of the corrupt Second Empire of Napoleon III. 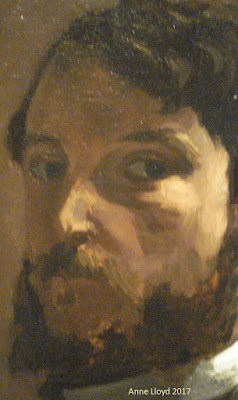 This was an undeserved fate for such an admirable human being. But there is an even crueler irony here. Bazille was not only a pioneer of the Impressionist movement before its formal beginning in 1874. He was killed in a pointless and stupid war, the chief effect of which was to plant the seed of World War I. Bazille was a "lost generation" artist, decades before the battles of 1914-18 claimed the lives of Franz Marc, Henri Gaudier-Brzeska, Guillaume Apollinaire, Wilfrid Owen and many more.

Had he followed his father's wishes, Bazille would have become a doctor. After graduating from college with a degree in science, Bazille entered medical school. The appeal of painting and music, however, was too great to resist.

In 1863, Bazille began to taking art lessons in the studio of a Swiss painter, Charles Gleyre. There  he met Claude Monet, Pierre-Auguste Renoir and Alfred Sisley. There is an intriguing painting on view in the National Gallery exhibit showing portraits of forty-three of the students at Gleyre's academy, each painted by a fellow student. 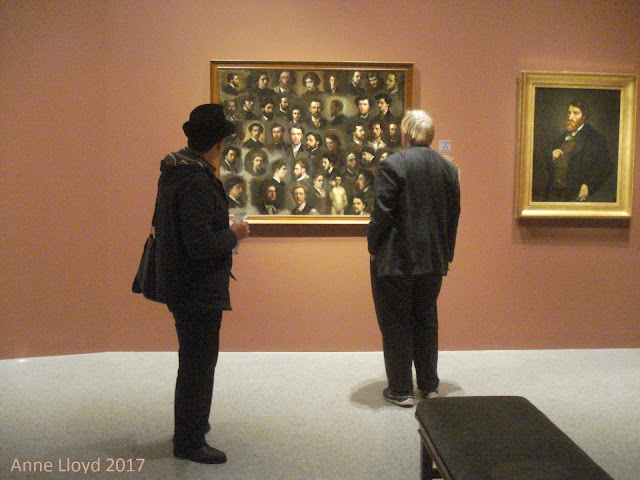 Anne Lloyd, Gallery view of the Frédéric Bazille exhibit at the National Gallery

Most of these aspiring artists are forgotten today, though Renoir and Sisley do appear on the crowded canvas. It is the message behind the image that counts.

What is portrayed here is the competitive, convivial brotherhood of artists among whom Bazille would search for meaning in life and art. Later, Bazille would join the group of painters and writers who met at the Café Guerbois in Paris: Edgar Degas, Édouard Manet, Emil Zola, Monet and Renoir, with occasional appearances by Paul Cezanne.

Bazille joined in this camaraderie of genius. His paintings and those of his fellow Bohèmes au café are skillfully integrated in the National Galley exhibit, which is on view in the newly renovated East Wing  building.

What is so notable about Bazille's work is how impressive it was from the start - but also how uneven it remained throughout his short-lived career. In 1869, Bazille painted two portraits which appear to have been created by different artists. 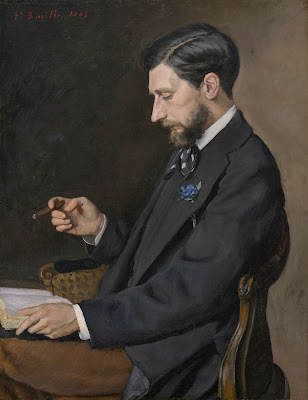 Bazille painted his music-loving friend, Edmond Maître, with the assurance and attention to detail of a seventeenth century master like Van Dyck or Velazquez. This is a work which can stand comparison with the kind of portraits that John Singer Sargent was to make his stock and trade during the 1880's and 1890's.

Bazille's portrait of the writer, Édouard Blau, painted later in 1869, is equal in psychological insight to that of Edmond Maître. But the color is applied, even on the face, with only minimal attention to blending and shadow. Was this due to a search for a new, more expressive style of portrait painting?  The considerable merit of this work raises questions about Bazille's ability to create and maintain a "signature" style, not about skill or attention to detail. 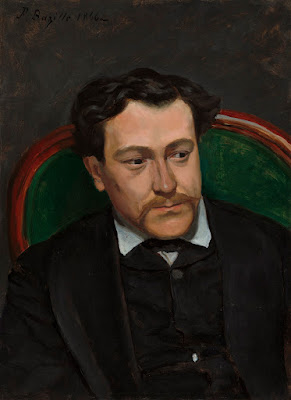 Bazille collaborated with Blau, working on a theatrical production which was never produced. He also spent a lot of time with Maître studying and playing contemporary music. Such wide-ranging interests speak highly of Bazille's intellect and enthusiasm. But these departures from painting also reveal a emotional response to art very different from that of Monet.

Monet, though hard-pressed for cash, did not deviate from his single-minded devotion to landscape painting. Bazille, by contrast, was cushioned from financial hardship by a modest allowance from his parents - which he shared with Monet. He was thus able to pursue many artistic paths, but seldom achieved the masterpieces of which his great talent was capable.

The question of Bazille's lack - or change - of focus is observable in one of his best known paintings. This is The Family Gathering, painted in 1867-1868, a truly iconic work of nineteenth century French art. 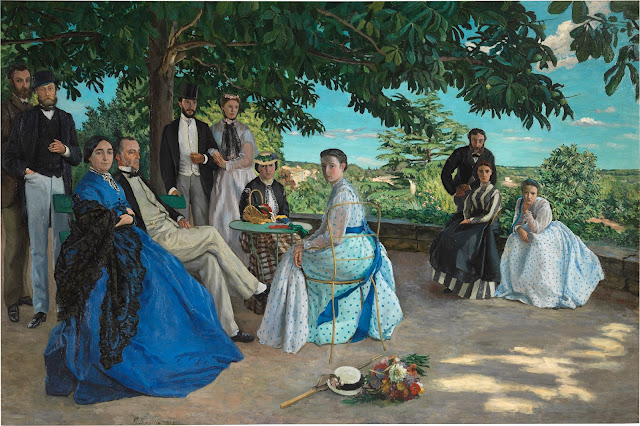 Frédéric Bazille, Portraits of the *** Family, called The Family Gathering, 1867-68

Bazille painted his parents, relatives and future in-laws during the summer vacation he took on his family's estate, Domaine de Méric, in the south of France. Once again, his reach eluded his grasp. To an incredible extent, Bazille's bravura treatment of the "center stage" group is unbalanced by exceptionally weak handling of the figures on the wings.

This central group is anchored by a brilliant depiction of Bazille's parents. His mother looks at the viewer with a mixture of compassion and apprehension while his father stares off into space, perhaps wondering about his son's problematic future. 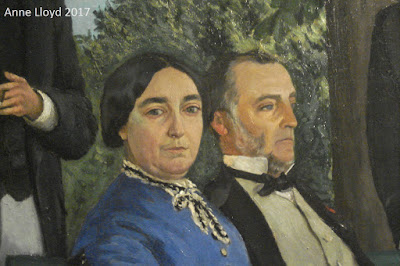 Seated or standing nearby are Bazille's aunt and cousins, notably Pauline des Hours, arm-in-arm with her fiance. All are beautifully rendered.

Behind his parents, Bazille painted himself and his uncle glaring from the left-hand edge of the picture. They look like intruders, rather than members of a family gathering.

It is the handling of the right-hand group - Bazille's brother Marc, his fiancee, Suzanne Tissié and his cousin, Camille des Hours - that really raises a major question about Bazille's ability to remain focused.

Once again, it seems to be the case of a different - notably inferior - painter at work. Marc Bazille's arms look like they are made of rubber, while Suzanne Tissié poses with almost rigor mortis stiffness. Most incredible of all is the way that that Camille des Hours holds her face as if it were a mask. She looks as if she had been painted by René Magritte in one of his surrealist works from the 1920's.

Such criticism may seem very harsh for the work of an idealistic young man who was still, essentially, a student. But Bazille had discerned the proper course for his art at the very start of his career. In December 1863, he wrote that “painting figures in the sun” was his ideal. When he focused on that aim, he achieved sensational success. 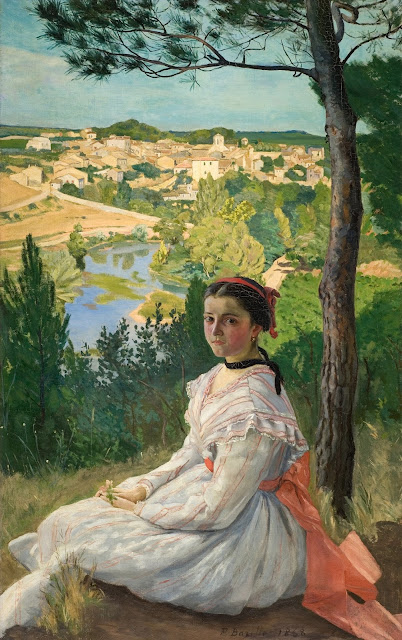 Frédéric Bazille, View of the Village, 1868

Bazille's View of the Village, 1868, is a testament to what he could achieve when he focused his abilities on reality rather than a "theme." Here a young girl poses on a hill overlooking the village near to his family home. It is very simple, entirely naturalistic and totally believable. The girl, no great "looker" by Parisian standards, exudes an inner beauty and psychological complexity that makes this one of the great character studies of nineteenth century art.

Berthe Morisot thought very highly of View of the Village, believing that it embodied the vision of the rising generation, soon to be called Impressionists, “to place a figure en plein air.” 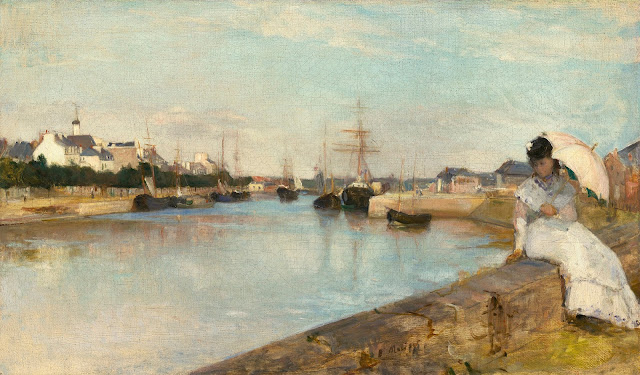 Bazille's influence on Morisot can clearly be seen in The Harbor at Lorient, which Morisot painted in 1869, after she had admired View of the Village.

Bazille achieved equally high results when painting landscapes "en plein air.” In 1867, he created a series of works depicting the famous castle, Aigues-Mortes. The bright, almost cloudless sky of Provence, the sun-baked battlements and shoreline were painted in the style that was to sweep the world following the first Impressionist Salon of 1874.

Bazille, despite these path-breaking works of art was still wrestling with himself over the direction of his art when he stunned his family and friends by joining the French Army. It was as perplexing a decision as it was unexpected.

Bazille volunteered to serve in the elite Third Regiment of Zouaves on August 16, 1870. At that stage, the recently declared war with Prussia/Germany was a duel between two rival empires, not as it later became a patriotic struggle to defend the Republic of France from invasion. Bazille was not obligated to join the military and, as a staunch believer in democracy, he detested Napoleon III.

Why did he risk his life for a despotic ruler who had betrayed the ideals of Republican rule in France? Perhaps the answer can be found in the way that Bazille signed his enlistment papers: "Bazille, Jean Frédéric, esquire, aged 28, history painter by trade.” 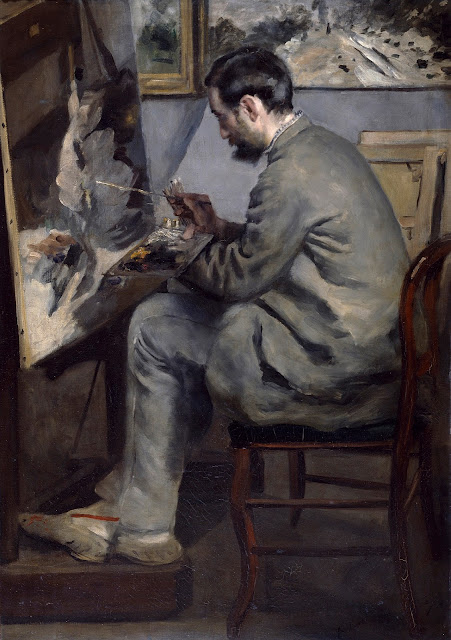 Bazille addressed an amazing variety of themes in his short artistic career, 1864 to 1870. However, he never painted a true "history" painting. Perhaps he was thinking of a recent work with a biblical theme, Ruth and Boaz (1870). More likely, the words "history painter by trade” reveal that he was still searching for meaning in art, for proof of himself as a man, for "something" greater than what life had offered him so far.

Whatever motivated Bazille to join the hard-fighting Zouaves, his death in battle deprived the nineteenth century art world of one of its most promising, talented artists.

As the National Gallery exhibit clearly shows, Bazille had already made a significant impact on French art by the time of his death in 1870. In doing so, Bazille set the stage for the Impressionist movement. How ironic that the young man who could not make up his mind helped to determine the future course of Modern Art.

Posted by Art Eyewitness at 3:54 PM