The Jazz Age: American Style in the 1920s at the Cooper Hewitt Museum, New York City 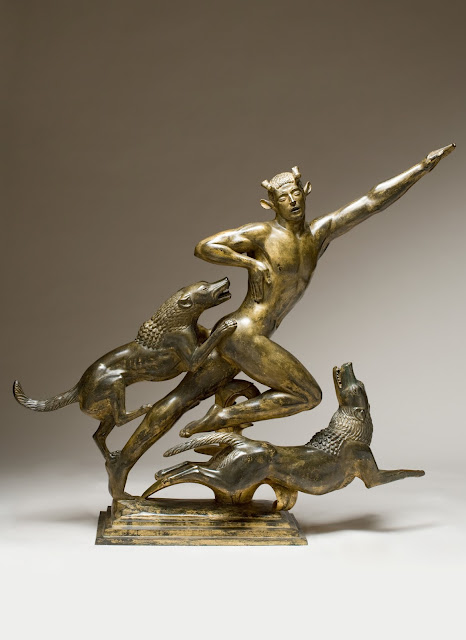 The Jazz Age: American Style in the 1920s

The American 1920's were years so rich in accomplishments, so abounding in superlatives, that it is still something of a shock that the decade ended in abrupt, crashing failure. Not only did Wall Street lay an "egg"  in 1929 but the real successes of the "Twenties" were called into question by the Great Depression.

Was Jazz Age America cruelly cut down in its prime like Paul Manship's sculpture of the mythological hero, Acteon?  Or was 1920's America an era of fraud and cynicism, a decade of glitter and doom?

The Jazz Age: American Style in the 1920s, at the Cooper Hewitt Museum in New York City, provides plenty of evidence of solid achievement and brassy, sassy iconoclasm during that fabled era. The exhibit presents 350 artworks, ranging from innovative furniture designs to exquisite jewelry. Many of these stunning pieces reflect the great events of the Twenties, from the soaring rise of skyscrapers like the Chrysler Building to the discovery of the tomb of King Tutankhamen in 1922.

The Jazz Age is co-curated by the Cleveland Museum of Art which has a rich collection of decorative art created in the American Midwest during the 1920's. 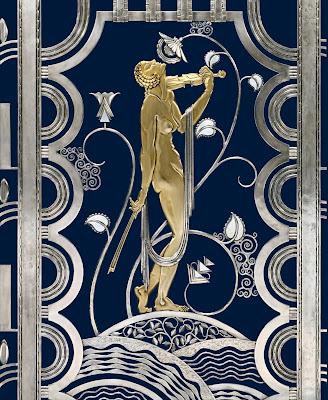 The exhibit's signature work of art, Muse with Violin Screen was made by the Rose Iron Works, Inc., in Ohio. At first sight, a European craft studio would have seemed a more reasonable guess. That is partly because the designer was the Hungarian-born Paul Fehér (1898–1990). Many European artists and designers like Fehér came to work in the United States. But the quality of this evocative work of art shows that America in the 1920's, whether New York City, Cleveland or Hollywood, was ready to receive them.

Other examples of American Regionalism abound in the exhibit, works like "The New Yorker" (Jazz) Punch Bowl. For all its East Coast sophistication, this could have been called The Buckeye Bowl. It was designed by Viktor Schreckengost, a major artist of the time, for the Cowan Pottery Studio located in Rocky River, Ohio, a suburb of Cleveland. 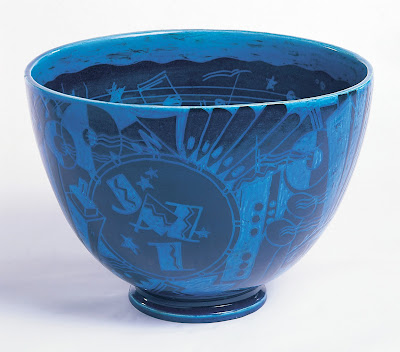 This punch bowl design was commissioned by Mrs. Eleanor Roosevelt in 1931, to be used for parties at the governor's mansion in Albany, New York. Franklin Delano Roosevelt was still Governor of New York, keenly observing from the sidelines as the Great Bull Market and then nearly the entire U.S. economy plunged over the "Niagara" of economic disaster.

The Cowan Pottery Studio did not make a similar punch bowl to celebrate FDR'S New Deal. It closed in 1931, due to a fall in sales, shortly after this beautiful, glazed earthenware bowl came out of the kiln.

There is a significant point to the timing of the Jazz Punch Bowl creation in 1931. The Twenties were over but Jazz Age creativity was just hitting its stride when Wall Street's jitters turned into convulsions.

It is often forgotten that the supreme example of Jazz Age architecture, the Chrysler Building, only opened its doors after the Depression hit. The iconic building was topped-off on Wednesday, October 23, 1929, with a 125 ft. spire, making it (briefly) the tallest building in the world. The next day was Black Thursday on Wall Street, the opening tremor to the financial earthquake of Black Tuesday, the following week.

The "skyscrapper" building was a dominant motif of the Twenties, figuring in designs for visionary cities like those created by Hugh Ferriss in 1922. It is a special treat to enjoy Jazz Age at the Cooper Hewitt and than head downtown to behold the Chrysler Building, with its Art Deco crown, looming over twenty-first century Manhattan. 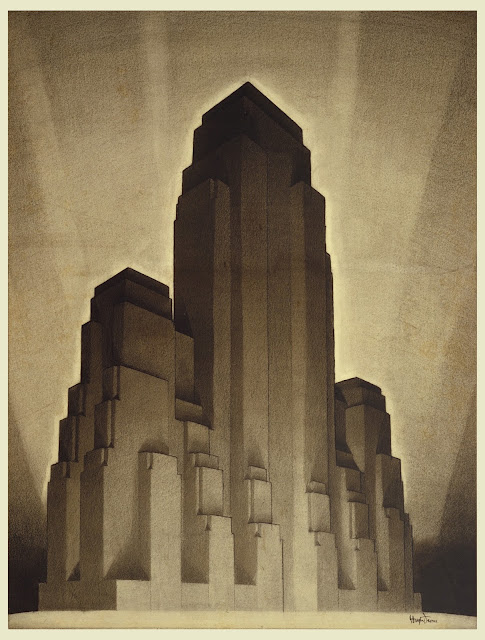 The key artistic event of the Jazz Age did not occur in New York and it took a while to happen at all. This trend-setting event was the Exposition des arts décoratifs et industriels modernes, held  in Paris during 1925. With Europe somewhat revived from the First World War, French chic opened the door to a new age. Art Deco was born.

No American designers exhibited at this exposition because Americans usually followed French cultural influences by a season or two. Once designers in the U.S. could study French Art Deco creations, the American response was not slow in coming. From Paul T. Frankl's Skyscraper Bookcase Desk, c.1928, to the hood ornament gargoyles on the Chrysler Building, Art Deco was embraced with fervor in America.

However, American influence was already paramount in Europe by the opening of the Exposition des arts décoratifs et industriels modernes in 1925. The introduction of jazz music by African-American troops serving on the Western Front in 1918 was the key cultural event in this respect. American tourists, with a zest for innovation and willingness to spend lavishly, made their presence felt at the exposition, as well.

Jewelry made a big impression on visitors to the Exposition des arts décoratifs et industriels modernes. Lavish ornamentation and exotic themes were a feature of the pieces created by the jewelers of Van Cleef and Arpels and those of Cartier.

The recent discovery in November 1922 of the tomb of King Tutankhamen supplied an ancient Egyptian theme to many of the pieces on view at the 1925 exposition. A belt buckle owned by the wife of Broadway song writer, Cole Porter, contained actual pieces of ancient faiance from Egypt. It appears, looking rather like an aviator's insignia, in the center of the assembly shown below, along with examples of Tuti Fruti jewelry also owned by Linda Porter. 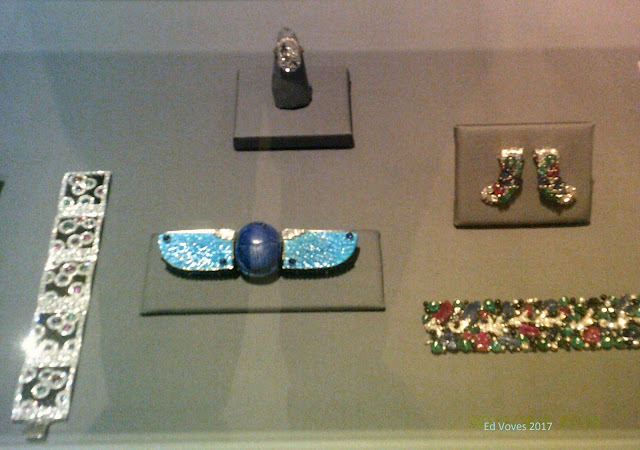 Portable screens and fabrics gave added scope to the designers whose work went on display at the 1925 Exposition. Every conceivable motif from airplanes to cubism to African fabrics was given its due - as long as it looked "modern."

Some of the most successful designs from the Twenties were anything but modern. On view at the Cooper Hewitt is a striking 1920's piece that was actually quite "medieval" in inspiration. 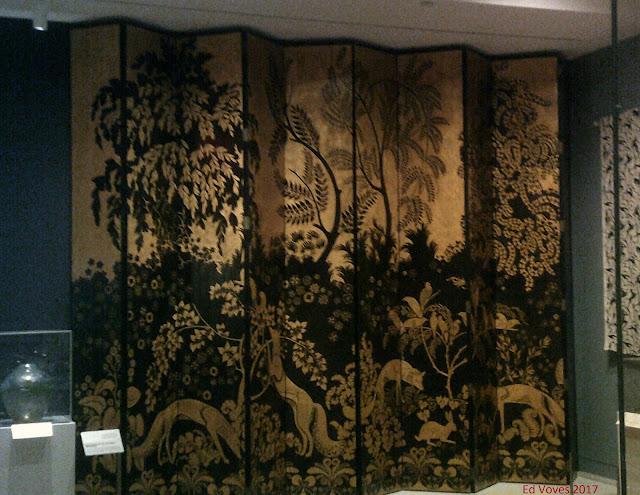 A 10-panel folding screen by Armand-Albert Rateau, entitled Renards (Foxes), evoked the tapestries and embroidered court dress of the Valois Dynasty of France during the late Middle Ages. This splendid work, made in gilt and lacquered wood around 1921-22, is a testament to the timelessness of naturalism in art.

As I studied a nearby work in the exhibit, a wrought iron mirror designed by Paul Fehér and made by the Rose Iron Works in Cleveland, I caught of glimpse of Foxes in the glass. 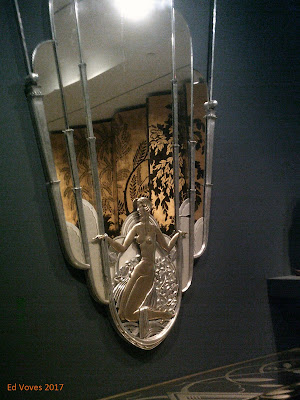 It was a special "in the moment" occasion. There were no art movements or styles to extol, no "isms" to promulgate. For just that moment of "now," beauty was reflected from the mirror on the wall to the mirror of the mind.

The "flapper" style, by comparison, proclaimed "Jazz Age" then and now. This articulation of body-caressing form came into its own around the time of the Paris Exposition. Some of the other examples of Twenties couture on display at the Cooper Hewitt seem surprisingly sedate. But the stunning "flapper" evening dress from the House of Chanel is a real show stopper.

The Evening Dress and Underslip, designed by Gabrielle "Coco" Chanel was "all the rage" in 1926. Perfectly matched to the slim, lithe figure that was the ideal flapper body-type, it was made from blue silk chiffon with applied blue ombré silk fringe. The shade of indigo was  dubbed Chanel Blue by Women's Wear Daily. Accentuated by the silver and gray of the dress, this striking garment evokes nightfall as a vibrant moment of coming alive. 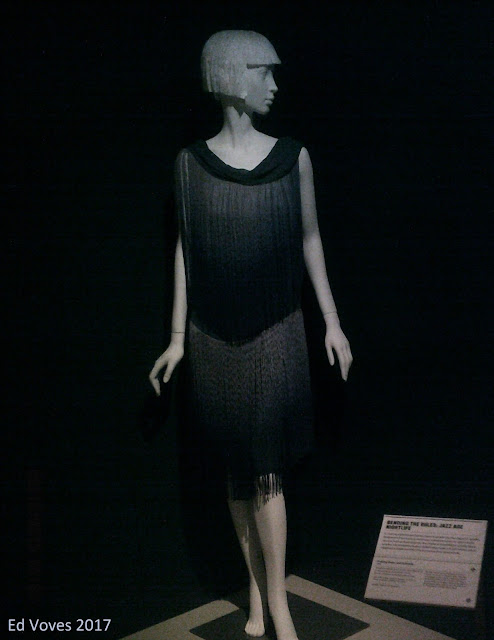 And that sense of "dancing in the dark" was reinforced by the dangling silk fringe. These strands were intended to shimmer and sway as the wearer danced the Charleston. This feeling of sensual vitality is so strong that it resonates nearly a century later, in the gallery of the Cooper Hewitt.

The "daring" atmosphere of the Jazz Age, represented by the rising hem of the flapper's skirt and the soaring height of skyscrapers like the Chrysler Building, were matched by the upward curve of Dow Jones Industrial Average during the Great Bull Market. If there was a measure of desperate gaiety about the 1920's, there was also an element of manic self-delusion to the views of economists like Irving Fisher who declared in early October 1929 that “Stock prices have reached what looks like a permanently high plateau."

Fisher's pronouncement was a quasi-religious declaration of faith in progress. So were many of the beautiful objects now on view in the Cooper Hewitt galleries. The doors for the Music Room of Solomon R. Guggenheim, designed in 1925 by the Russian-born French artist, Seraphin Soudbinine, show trumpeting angels atop skyscrapers. After Black Tuesday, such images would seem like a bad joke. 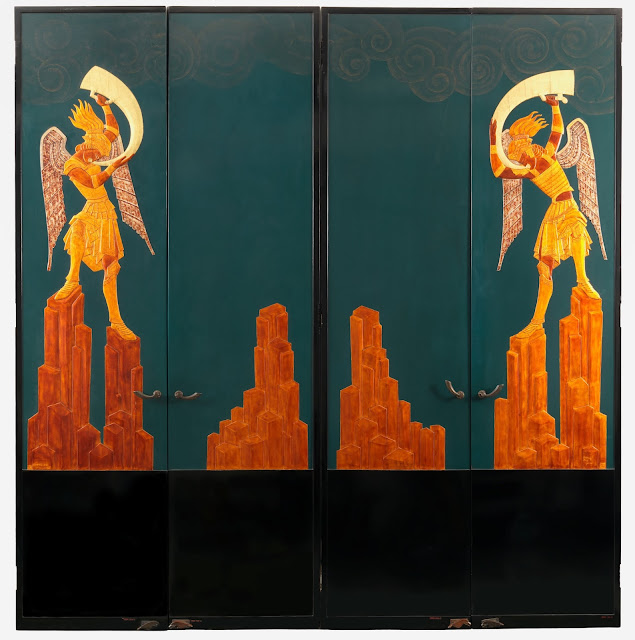 Black humor was also part of the Jazz Age. In 1931, Frederick Lewis Allen, an editor for Harpers, published Only Yesterday: an Informal History of the 1920's. Allen's book was one of the great works of non-fiction in American history. In Only Yesterday, Allen probed the psyche of the American 1920's and found that "disillusionment (except about business and the physical improvements which business would bring) was the keynote of the nineteen-twenties."

Disillusionment is almost impossible to present in an art exhibition - except perhaps in a photo display. It is no carping criticism of Jazz Age at the Cooper Hewitt to point out that this theme is not really addressed by the exhibit. Yet Allen's brilliant insights are worth considering for a moment, as they explain why Americans in the 1920's were dismissive of the past and equally eager to visualize angels on top of skyscrapers.

The lingering "shell shock" of World War I, Allen noted, was chiefly responsible for the widespread contempt for Victorian values. But even more astute was his observation on the vague discontent of the average "Joe" during the  American Jazz Age. About this disillusionment, Allen wrote of :

With the majority of Americans its workings were perhaps unconscious; they felt a queer disappointment after the war, they felt that life was not giving them all they had hoped it would, they knew that some of the values which had once meant much to them were melting away, but they remained cheerful and full of gusto, quite unaware of the change which was taking place beneath the surface of their own minds.

During the 1920's, Americans of all classes and regions remembered the horror of the battlefields in France, the staggering loss of life from the Spanish Influenza of 1918-19. The Old Order was held in disrepute, but Americans wanted to believe in progress, in human excellence, in a future that would be better than the past.

Paul Manship's Actaeon, 1925. virtually defines the aesthetic vision of the American 1920's. But it does so based on its embodiment of American aspiration. In the Greek myth, Actaeon was turned into a stag by an arrow from Diana's bow. On the surface that is what Manship depicted. But what Americans saw in the 1920's was Actaeon's athletic figure, launching himself into heroic action, reaching for the stars. 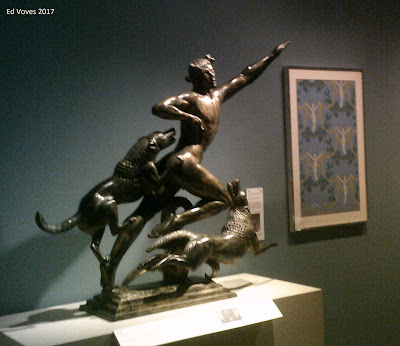 Were Americans of the 1920's naive to do so, to believe in a world tomorrow more promising than today?

Judging from the stunning works of grace and beauty on view at the Cooper Hewitt Museum, it is impossible to blame them. Some of what glittered during the American 1920's was indeed solid gold.

Posted by Art Eyewitness at 4:33 AM