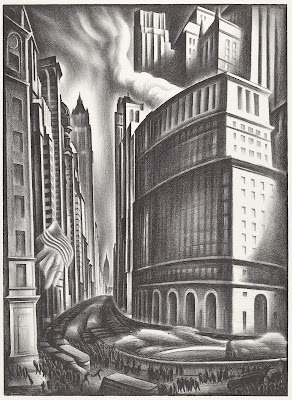 Saturday's Child, according to Mother Goose, "works hard for a living." Martin Lewis, the great Australian-born artist, used this nursery tale as the title for one of his greatest works, Quarter of Nine - Saturday's Children. We will shortly look at this extraordinary drypoint etching.

Martin Lewis (1881-1962) was a master printmaker, as was Howard N. Cook, whose image of the surging tide of traffic, human and vehicular, in New York City, introduces this review.The art works of Lewis, Cook and other printmakers are currently on display in a small, but hugely important exhibit at the National Gallery of Art in Washington, D.C. The Urban Scene: 1920-1950 opened last February and runs until August 6, 2017.

The Urban Scene: 1920-1950 is the kind of exhibit that can easily be overlooked. Etchings and lithographs do not command the kind of attention that art exhibits about Monet or Matisse achieve.

Also, the National Gallery of Art has been having a "career" year since the renovated East Wing reopened on September 27, 2016. One outstanding exhibit after another has been mounted:  Della Robbia's Renaissance sculptures, Frederic Bazille and the Birth of Impressionism, East of the Mississippi: 19th Century American Landscape Photography to name a few. It would be a great misfortune if The Urban Scene: 1920-1950 gets lost in the shuffle.

The Urban Scene has two great lessons to teach. First the artistic medium, in this case printmaking, does not need to be "cutting edge" to be effective. The second, even more significant, point is that the everyday life of "blue collar" America - gritty, unsentimental, raw-edged - is a fit subject for great art.

The first point, dealing with printmaking media is perhaps the most problematical. Why did Lewis and company choose drypoint etching, woodblock printing and lithography to create images that directly rivaled the path-breaking photographs of Bernice Abbott and Lewis Hine? 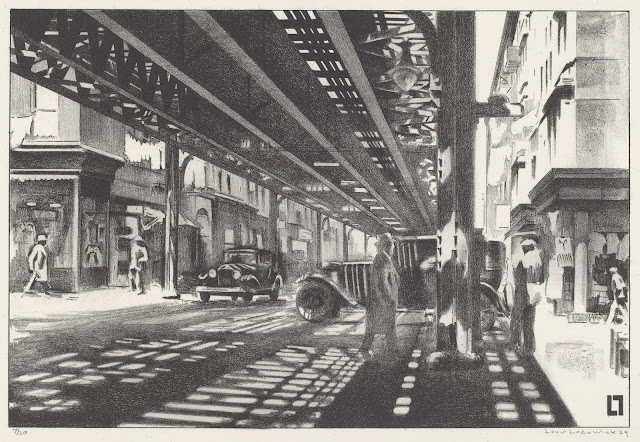 When you compare Louis Lozowick's lithograph, Allen Street, 1929, with Under the El at the Battery by Berenice Abbott there seems little difference. Both print and photo brilliantly handle the dappled light shed by the metal superstructure of the elevated platform on the street below. Superficially, the same seems to be the case for Samuel Margolies' Men of Steel and the series of photos by Lewis Hine of the construction workers of the Empire State building.

At second glance, one realizes that there is a spiritual quality about the prints, an intimation of the "other reality" that lies all around us. There is no art term that defines this all-encompassing presence. "Numinous," a word borrowed from theology, perhaps comes closest to conveying this idea.

The men in Lozowick's Allen Street evoke an old term to describe people - "souls." The man striding through the shadow at center and those highlighted by the glaring sun evoke a sense of ethereal "being" that defines their humanity. However sketchy  or indistinct their bodies are depicted in the print, in this "other reality" they are souls.

"Numinous" is the most fitting word to describe the shafts of light beaming down on the Men of Steel by Samuel L. Margolies (1897-1974). Margolies, a native of New York City, was a printmaker for the W.P.A during the Depression. He was well-acquainted with how close to the margin of survival many people lived. His etching of a forlorn "Hooverville" shack, Beware of the Dog (not in the exhibit) testifies to his documentary ability. But mostly, Margolies created images of the "heroic" New York skyline or snow-clad country vistas.

Men of Steel is much more than "heroic" New York. And it is very different from Lewis Hine's vertigo-inducing photos of men at work on the Empire State Building. I get queasy just looking at Hine's pictures of cloth-capped workers dangling from cables high above the streets of New York City.

Margolies used the drypoint etching technique on Men of Steel. The etched lines, slanting down from the top right-hand corner were meticulously inscribed to achieve modulations of light and shade. These beams of light caress the buildings  below the construction workers, who are so intent in their work that they hardly notice. 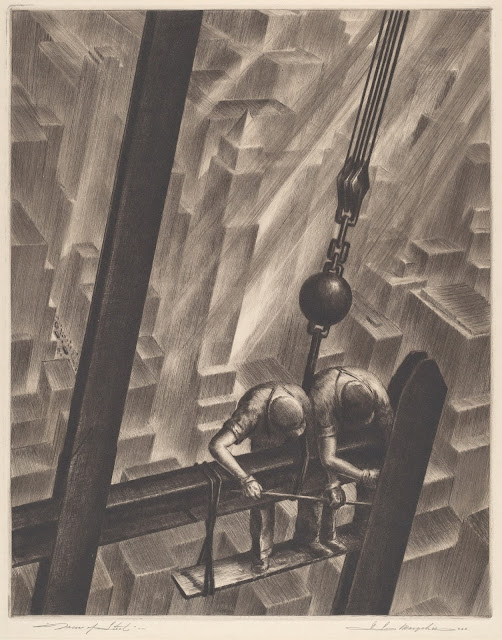 Margolies' level of skill is little short of miraculous. What we see here is an inverse of the expression, "There but for the grace of God go I." Such are our feelings when we look at Hine's photos. But Margolies "men of steel" are being safeguarded by the providential stream of grace, pouring down upon them, upon New York City and ultimately on all humankind.

It wasn't just these "men of steel" who were unaware of God's grace. People during  the 1930s often strained to see any evidence of divine intercession. The Depression-decade was a tough time to live. The more waspish Americans were likely to see the blackest of humor in the old saying that "God takes care of drunks, children and the United States," 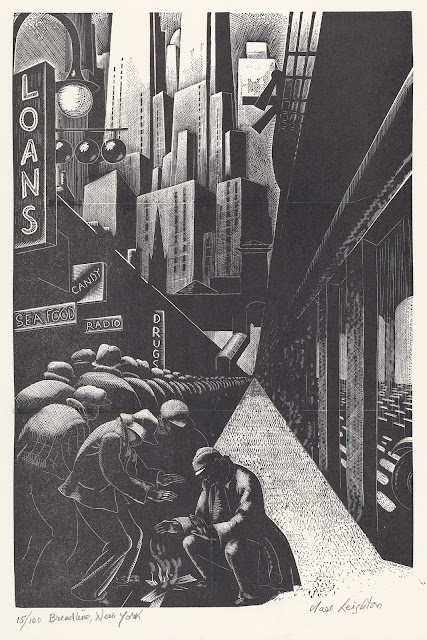 In these unsparing images, life is reduced to a rat race, to "brother can you spare a dime." Yet, even here, we detect a hint of spiritual presence at work. Like the fire warming the numbed fingers and hands of the down-and-out men in Breadline, a sense humanity will flare-up to unfreeze our calloused hearts.

Look at the bottom right-hand corner of The People Work - Evening. There, squeezed against the edge of the picture, you will see the face of a smiling, older woman. It is the one and only clearly defined countenance in the entire scene. 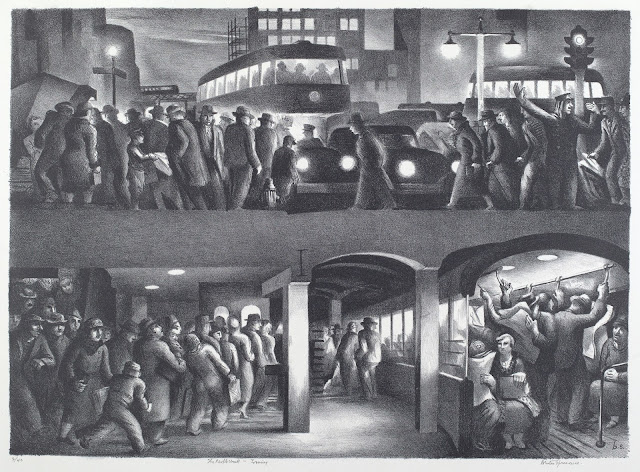 Benton Spruance (1904-1967) was one of the dominant figures of the Philadelphia art establishment during the 1930's and 40's. He often had a polemical slant to his work. But here, the elderly woman is finding inner peace amid all the hubbub. Or is she just amused by the madness of the human comedy taking place all around her?

Ambiguity too has a role to play in art. What better place for the "gray area" of life than a black and white print?

In Quarter of Nine - Saturday's Children, Martin Lewis raises questions and doubts about the meaning of modern urban life. The scene takes place with a medieval-looking edifice in the background. This is the now demolished 71st Regiment Armory on the southeast corner of 34th Street and Fourth Avenue in New York City. Lewis, whose studio was a couple blocks away at 145 East Thirty-Fourth Street, no doubt witnessed such a scene many times. 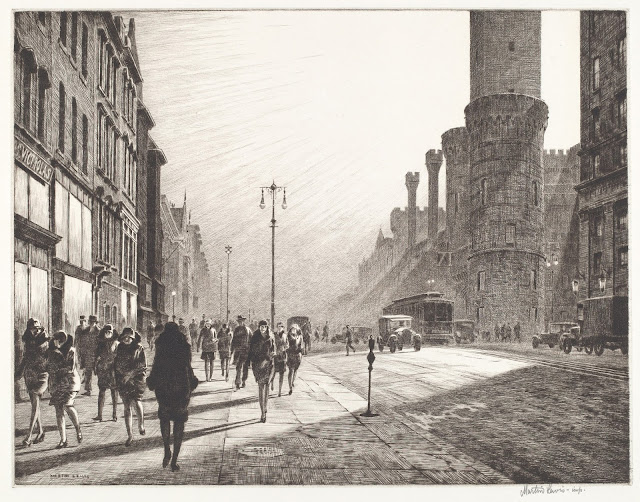 With a mastery rivaling Margolies, Lewis depicted streams of light pouring past the faux-towers and battlements of the armory.Trooping up Fourth Avenue (now Park Avenue) is a cavalcade of city dwellers, counterparts to Spruance's troll-like hoard. Who are these stylishly-dressed young women in tight-fitting flapper coats, bundled against the wind of a late winter morning in 1929?

The title of Lewis' print may provide the answer. Quarter of Nine most likely means that these urbanites are rushing to get to work on time.

In 1929, most Americans still worked a six-day or five-and-a half-day work week. The Ford Motor Company instituted a Monday to Friday schedule in 1926. But it was not until President Franklin Roosevelt signed the 1938 Fair Labor Standards Act that the two-day weekend was authorized by law.

Nobody likes working on a Saturday. The hustling pedestrians, straining to get to work by nine a.m., are no doubt thinking of what they will do with their truncated weekend. Most likely, they are thinking of home. Lewis was a master of night scenes. Nearly two decades after Quarter of Nine - Saturday’s Children, Martin Lewis created Yorkville Night in 1948, also in drypoint, showing homeward-bound New Yorkers.

The superstructure of an elevated platform looms overhead, as in Louis Lozowick's Allen Street lithograph. It is the light coming from the under the awning of the corner produce market that dominates the scene. The glow speaks of the items being selected for dinner that will be enjoyed at home. This light silhouettes the two women walking away from the store with their purchases. 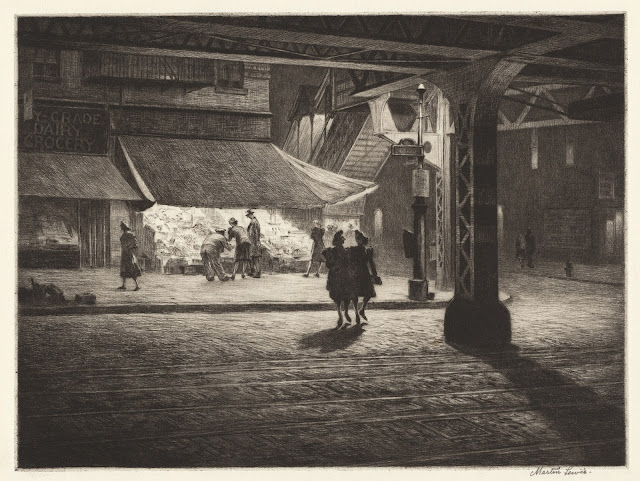 Lewis was celebrated in his day for such nocturnes as Yorkville Night. His incredible skill with the technique of hatching and cross-hatching gained the attention of Edward Hopper. Lewis shared the secrets of his technique with Hopper, helping  the great painter become an accomplished printmaker as well.

A year before Lewis created Yorkville Night, Stow Wengenroth (1906-1978) evoked "night in the city" with his lithograph, Quiet Hour. In an exhibition where every work on display is a certified masterpiece, I must say that Quiet Hour takes the top prize. That is saying a lot because Quarter of Nine -Saturday's Children has been a personal favorite of mine - and still is. 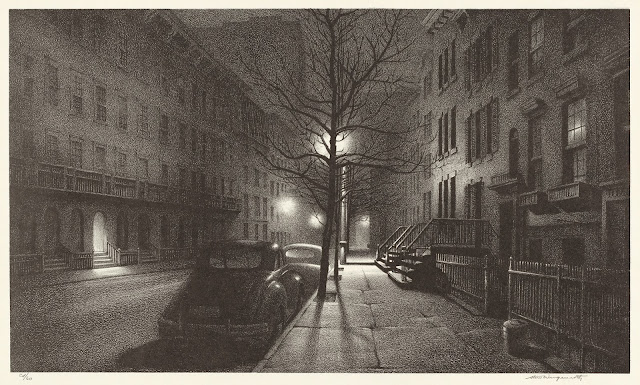 Quiet Hour is suffused with the numinous feeling so evident in Men of Steel, but without the etched beams of light/grace. Instead, the feeling of spiritual presence suffuses the entire picture plane. This setting could be interpreted as a menacing or haunting scene,  a place of alienation or loss. Instead, Wengenroth counterbalances the empty streetscape with the beckoning glow of the house light pouring out a welcoming glow from the doorway.

Is there a more comforting, reassuring sentence in any language than that? That's the feeling I get from viewing The Urban Scene: 1920-1950 at the National Galley, a truly wonderful exhibit.

I like to think that Wengenroth's Quiet Hour is scene that a returning World War II veteran would have appreciated.

Here is the old neighborhood. There's our neighbor's car (a 1940 Studebaker Champion Coupe, if I'm not mistaken) reflecting the light of the street lamps on its hood and fenders. There's the tree I used to watch magically growing green in the spring, as it will do again in a couple of months. There's the light in the doorway of ...