This Ever New Self: Thoreau and His Journal at the Morgan Library & Museum 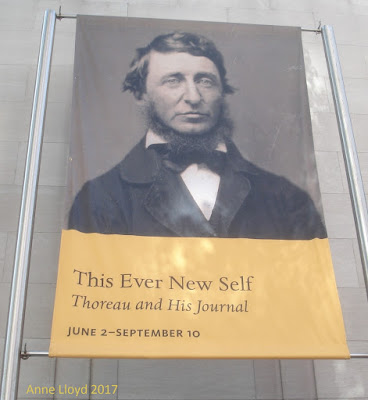 This Ever New Self: Thoreau and His Journal

It is an odd sensation to look at the Morgan Library and Museum in New York City and see the portrait of Henry David Thoreau looming overhead. Thoreau's questioning face is imprinted on a museum banner, advertising the new exhibit, This Ever New Self: Thoreau and His Journal.


The traffic flows up Madison Avenue past the Morgan in a steady stream of cars, buses, trucks. The breeze gives the museum banner a ripple now and again, imparting a sense of vitality to what after all is just a silk-screened image. Thoreau on his banner seems very much alive.

As we head toward the door of the Morgan, it's hard not to feel that Thoreau's eyes are appraising us, taking our measure.  Go inside the Morgan and you will find the original of the Thoreau portrait, a small daguerreotype about the size of a modern wallet photo. Those "all-seeing" eyes are there too. 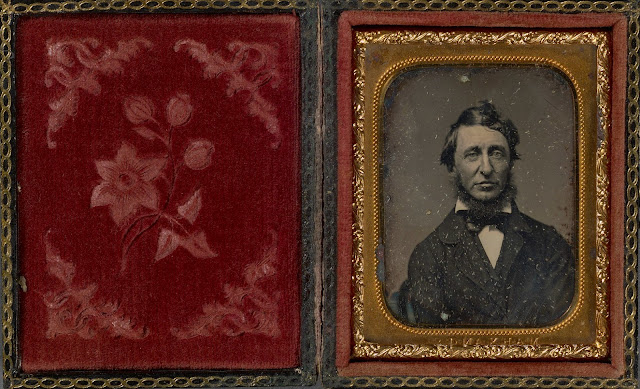 Along with this daguerreotype, the Morgan curators have assembled a remarkable array of documents, chiefly volumes of Thoreau's Journal, and artifacts which illustrate the extraordinary flight of mind and the rather ordinary daily life of Henry David Thoreau.

This Ever New Self: Thoreau and His Journal is the third biographical exhibit which the Morgan has devoted to a nineteenth century literary giant in under twelve months. These have been stellar displays of genius, starting with Charlotte Brontë in September 2016 and Emily Dickinson in January 2017. A fourth, examining Henry James and the Victorian art scene, recently opened and will be reviewed in Art Eyewitness in the coming weeks. 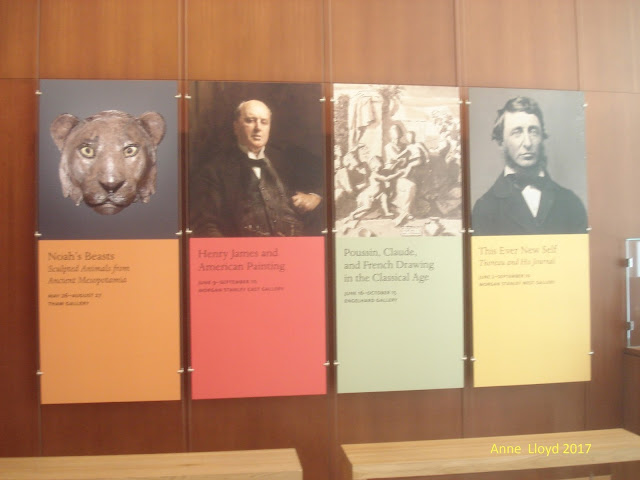 If This Ever New Self: Thoreau and His Journal enables us to focus on Thoreau's life through the prism of his journals, there is one factor that needs to be noted. This is not - primarily - a "life and times" exhibit. There are certainly references to the very troubled era in which Thoreau lived and to which he responded with the brilliant essay, Civil Disobedience, and hard-hitting speeches denouncing slavery. 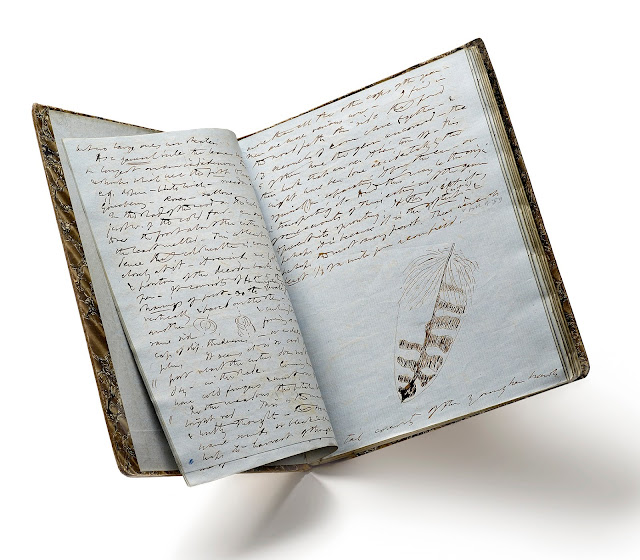 The Morgan exhibit, however, does not stray from Thoreau's journal entry for November 1, 1858, which provides the title and the theme for this splendid museum display.

Give me the old familiar walk, post office & all – with this ever new self – with this infinite expectation and faith.

Thus, the Morgan exhibit enables us to see through the eyes of the Concord/Walden Pond Thoreau rather than the Lyceum-circuit Thoreau. Yet, what amazing eyes those were!

Ellery Channing (1818-1901), Thoreau's great friend and walking companion, wrote that Thoreau's eyes were "the deepest set blue eyes that could be seen, in certain lights, and in others gray, — eyes expressive of all shades of feeling, but never weak or near-sighted..." 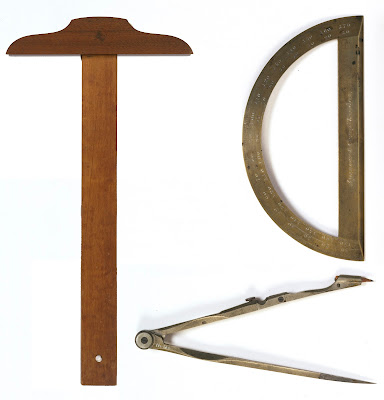 Thoreau did a lot of looking and evaluating during his life. The tools of his "trade of life" are on display in the Morgan exhibition. These include his surveying equipment - t-square, protractor, and compass. Thoreau's spy glass is there too, bought for the hefty sum of eight dollars. Even Thoreau's sharp eyes needed some help in observing the avian population of Concord, Massachusetts.

If Thoreau earned his bread from surveying, making pencils, doing handy-man chores, he also devoted himself to gaining insight, of the world, of himself. This was his true vocation and This Ever New Self illustrates Thoreau's intellectual life with his personal copy of the Bhagavad Gita, his notebooks and volumes of his celebrated Journal, one of the crown jewels of the Morgan Library collection. 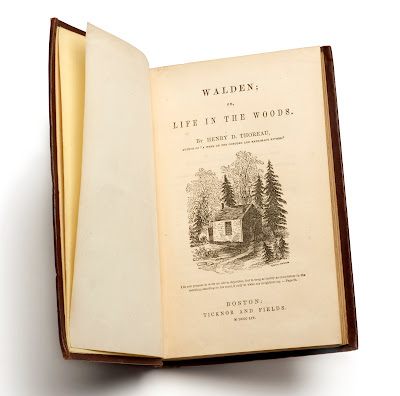 A first edition of Walden; or, Life in the Woods is on display, as might be expected. In this remarkable book, we read one of Thoreau's great insights from his sojourn in the woods:

Who shall say what prospect life offers to another? Could a greater miracle take place than for us to look through each other's eyes for an instant?

Thoreau was an extraordinary man, to be sure. But most of his life was consumed with ordinary, everyday pursuits. If he achieved this "greater miracle" it was with his Journal rather than his spyglass.

Almost all of the exhibit artifacts on display in This Ever New Self are otherwise unremarkable, but for their place in the story of Henry David Thoreau.. 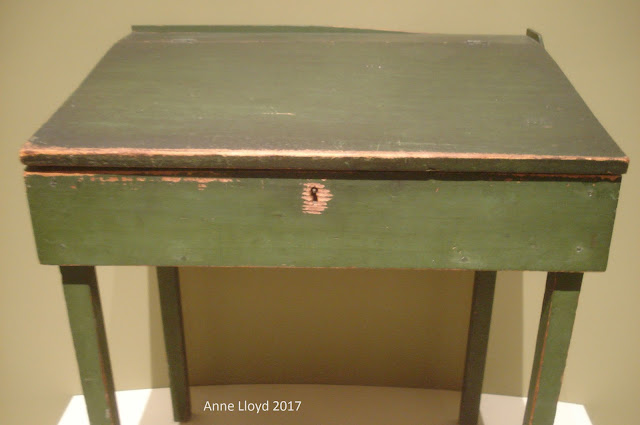 Thoreau's desk, upon which he jotted down his thoughts in his Journal is one of the truly iconic objects of American culture. Made from Eastern White Pine and painted a rather sickly shade of green, it would hardly raise an eyebrow on Antiques Roadshow except for the man who wrote upon it.

The same could be said of Thoreau the man. He was redeemed by his thoughts, by the courage with which he plunged into his own psychic depths, rather than his deeds. His life was rather hum-drum and even the two years at Walden Pond hardly bear comparison with the privations of a Tibetan monk.

Thoreau's attitude to his fellow Americans occasionally fell short of the uncompromising standards of human conduct he propounded in his writings.

In her wonderful book on Civil War-era America, Ecstatic Nation, Brenda Wineapple relates how Thoreau was introduced to Walt Whitman by Bronson Alcott in 1856, the year after Leaves of Grass was first published. Thoreau, watching the crowds on the streets of Brooklyn, "suddenly turned and asked, 'What is there in the people? Pshaw! What do you (a man who sees as well as anybody) see in all this cheating political corruption?'"

That was not the kind of remark that would endear anyone to Whitman, who later declared that "Thoreau’s great fault was disdain—disdain for men (for Tom, Dick and Harry)."

Was Thoreau incapable then of the "greater miracle" he had written about, of looking "through each other's eyes for an instant?”

Thoreau's frustration with the seemingly ineradicable flaws in the American character was surely a factor in his dialog with Whitman. Then again, adjusting to life in NYC might have been more than Thoreau could handle. The Morgan exhibit displays a letter from an earlier visit in which Thoreau complained to his mother that “I walked through New York yesterday – and met no real and living person.” 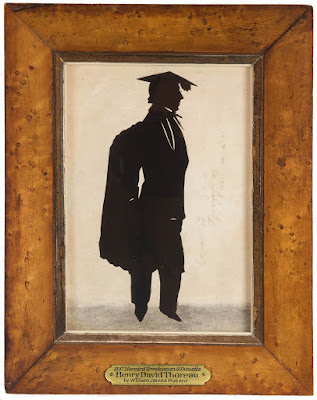 Yankee and Harvard man though he was, Thoreau was equally unsparing towards the political apathy and expediency of his fellow New Englanders in the struggle against slavery. This attitude, of course, is what landed him in Concord Jail for a night in 1846.

Incredibly, the lock and key that kept Thoreau incarcerated were preserved when the Concord Jail was demolished in 1871. The lock had been made in Birmingham, England. It was used from 1788, when the jail opened, until 1871. New Englanders have well-deserved reputation both for frugality and a sense of history. A gentleman named A. Gardner Heywood saved the lock and key and gave these talismans to the Concord Antiquarian Society. 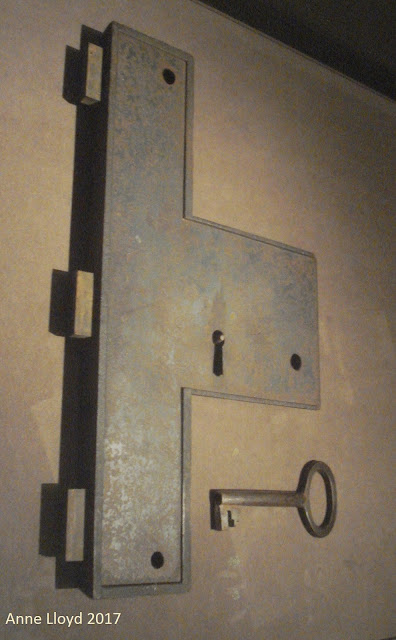 As extraordinary as this act of preservation is, it was Thoreau's action that transformed the lock and key into relics in the saga of American democracy. Thoreau wrote in Walden that:

One afternoon [July, 1846], near the end of the first summer when I went to the village to get a shoe from the cobbler's, I was seized and put into jail, because, as I have elsewhere referred, I did not pay a tax to, or recognize the authority of, the state which buys and sells men, women, and children, like cattle at the door of its senate-house.

Thoreau spent but a single night and was released next morning. A mysterious person paid his poll tax, probably his Aunt Maria. A proper New England lady, she was scandalized to have a member of the family in prison. Thoreau was so annoyed at losing the moral high ground that a prison sentence conferred that the town sheriff had to force him to leave.

It's amazing that a semi-comical incident like Thoreau's night in jail should have resulted in the writing of Civil Disobedience, which in turn influenced Mahatma Gandhi, Martin Luther King Jr. and many other freedom fighters of the twentieth century.

Gandhi and Dr. King espoused a non-violent form of civil disobedience. How ironical, that Thoreau should have championed John Brown, the Abolitionist who tried to purge America "with blood" to rid the nation of the evil of slavery. Did Thoreau, in the last years of his life, stray from the path of righteousness, the path he inspired others to take later?

Less than a year before he died in March 1862, Thoreau posed for a new type of photograph called an ambrotype. This occurred on August 21, 1861. A month earlier, the Battle of Bull Run, Virginia, had ended in the rout of Union forces. The Civil War was on and a purging with blood was indeed taking place. 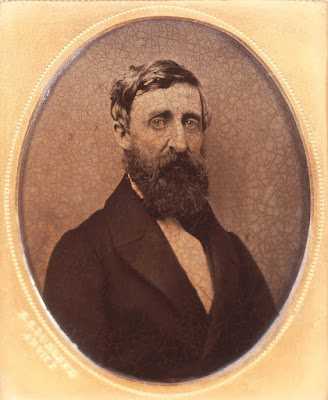 And there was nothing Thoreau could do or say or write that would make any difference. By the time that Thoreau sat for this ambrotype, he was dying - slowly - from tuberculosis. You can see death creeping across his gaunt, weary face.

How different from the daguerreotype of 1856, which Thoreau had posed for to satisfy the request of an admirer in Michigan. Calvin H. Greene had sent Thoreau five dollars for two of his books and the portrait photo. Thoreau complied, sending the books, the daguerreotype and $1.70 in change.

By 1861, Thoreau had nothing left to give. Even the gleam in his eyes was gone. Only the words of A Week on the Concord and Merrimack Rivers, of Walden and of Civil Disobedience remained as his legacy.

No greater gift than these words could Henry David Thoreau have bequeathed to his countrymen and to freedom-loving people around the world and across the centuries.

Introductory Image:
Anne Lloyd (Photo 2017) Exhibition banner forThis Ever New Self: Thoreau and His Journal, Summer 2017, at the Morgan Library and Museum.