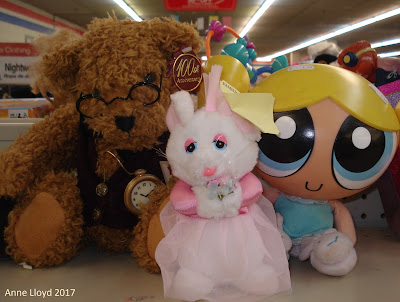 Some Thoughts on the Role of Toys in the Art World

Sometimes a visit to the art museum presents a difficult choice. Should I go see the exhibit or check out the gift shop first. The temptation to follow the latter course is often irresistible.

The recent Wild: Michael Nichols exhibit at the Philadelphia Museum of Art is a case in point. The inventory of the gift shop reflected Nichols' status as one of the world's greatest nature photographers.  A vast herd of animal-themed toys thronged the shelves and display racks. Floor to ceiling, lions, tigers, bears and a stray elephant or two were everywhere. 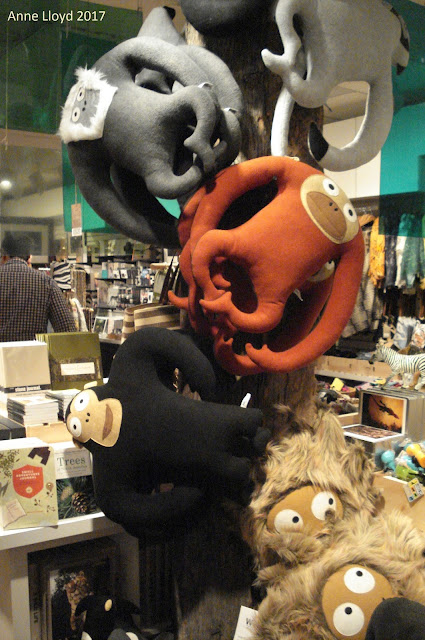 These Wild toys reinforced a growing interest in toys since I reviewed the Embracing the Contemporary exhibit at the Philadelphia Museum of Art. This exhibition of modern art, collected by Keith and Katherine Sachs, included a tiny wooden toy box filled with miniature toys. This small wonder was crafted by Charles LeDray in 2005-06. I had a much bigger version of such a toy box as a child, long gone - but not forgotten. 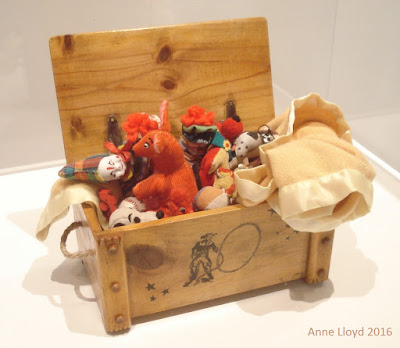 In my 2016 review of Embracing the Contemporary, I wrote:

Looking at LeDray's wondrous work of art, I was stuck by the thought that we begin to collect memories as children and continue to do so throughout our lives. This in turn leads to a point when we are moved to share our emotional riches with others.

Lately, my wife Anne has been going on photo "safaris," chiefly of the many remarkable gardens of our Philadelphia neighborhood. Anne stopped in to the local Salvation Army store during one of her expeditions. A creative moment, relating to my toy box meditations, ensued. 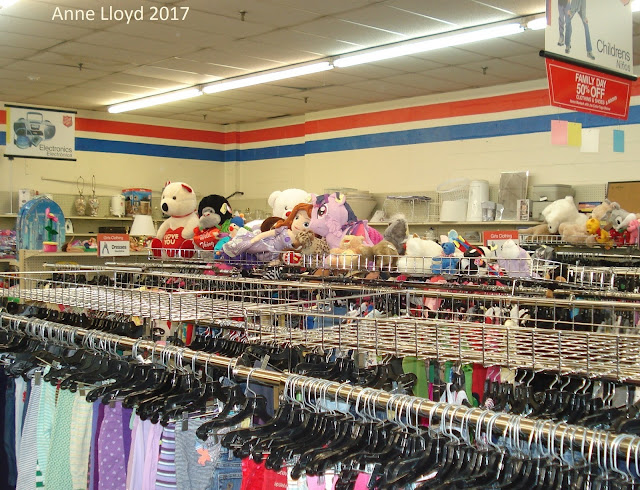 When you go into the Salvation Army store, you are confronted by row upon row of cleaned, if slightly time-worn, clothing. On top of some of the metal shelves are trays of cast-off stuffed animals. Once these were treasured companions of a little Jane or Johnny. Kids grow-up and outgrow their playthings. Computer games take the place of plush animals. Time marches on.

Anne started snapping photos and then began rearranging the stuffed animals into little "photo-op" scenes. Evidently, someone else had a similar idea earlier. Anne found a lion and a lamb sharing a shelf. With a little propping-up, predator and prey were reconciled and ready to pose again for a new incarnation of the Peaceable Kingdom. 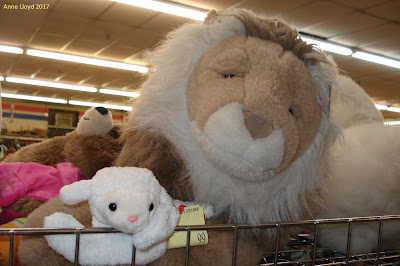 These discarded toys are especially affecting and poignant because they were once loved by children. Some resonance of this love clings to them still. I sensed that when I saw the first batch of photos that Anne took. When I went with Anne for a return visit, I was amazed to see the transformation for myself.

Anne's careful groupings of these toys seemed to bring them to life. Something struck a chord or touched a nerve in me. Those inanimate objects really appeared to be awakening to the kind of life they once enjoyed in the company of young children.

Toys play a really important part in children's lives. I'm not referring here to toys that have a clearly "educational" role - which most kids instinctively reject. 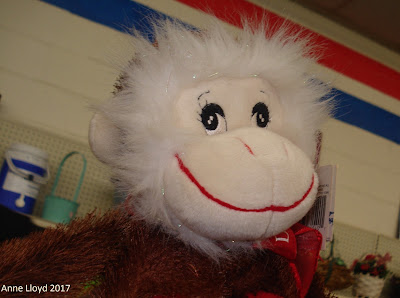 A smiling monkey doll, like this one, is more life affirming. It helps a young child adjust to the world, to identify, appreciate and respond to kindness and love in the immediate family circle.

Then comes the next import step, to appreciate and love beyond the family unit.

The big, beaming smile that spreads across this monkey's silly mug also appears on the face of Frans Hals' Fisher Boy with a Basket. Why did the cash-strapped Hals paint a picture of an impoverished working-class kid with a toothy smile?  He cannot have made much money selling this or the other versions of street urchins that he did. 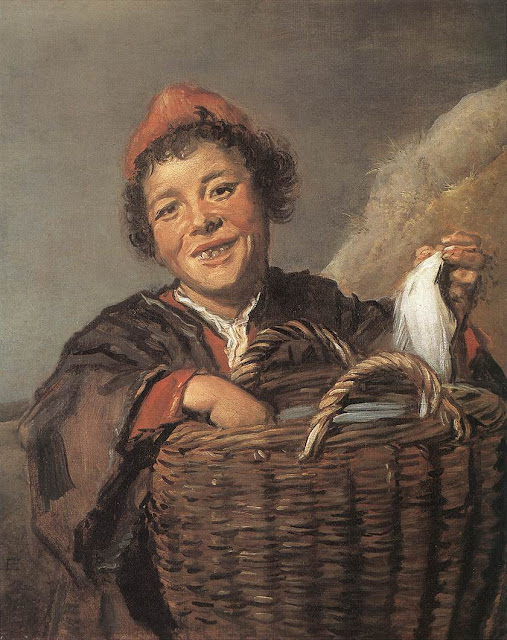 I believe that Frans Hals and his compatriots in Golden Age Holland could appreciate a smile on a poor boy's face because their society invested so much in the well-being of children.  This regard for others which Dutch children learned early in their lives was a social "glue" which helped the United Provinces survive repeated invasions and internal stresses that would have wrecked less well-adjusted societies during the 1600's.


Artists and writers have been imparting human attributes to animals since Aesop.That's certainly a comforting thought. Perhaps my reflections on stuffed animals and art are not quite so “off-beat” after all!

On second thought, the ridiculous elements in life need to be cherished in art along with the sublime. Take a look at these Salvation Army recruits and try and keep a straight face. The kooky clown in his fright wig and the teddy bear and panda posing for a selfie. Just fun! Purely, simply fun! 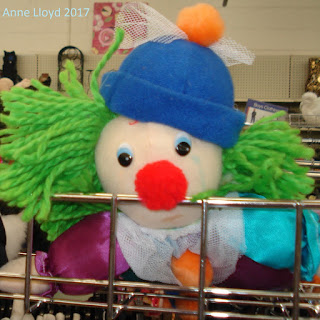 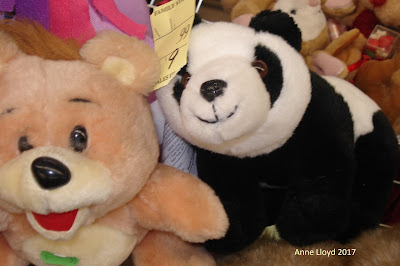 I've come to believe that a totally serious approach to art isn't always necessary - or even wise all the time. Not that I'm in favor of drawing a mustache on the Mona Lisa, either. 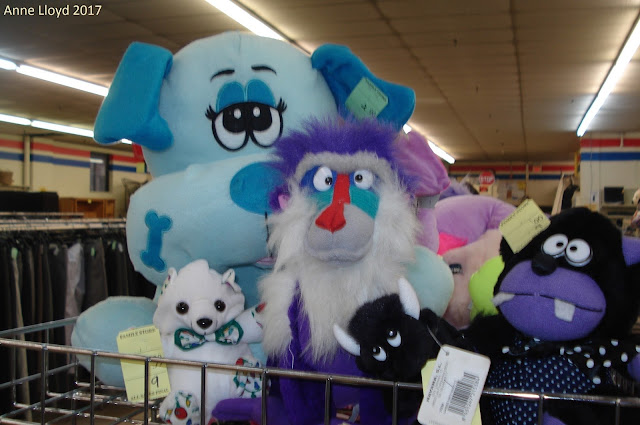 Here is a demonstration of what I mean. Anne arranged a troop of the Salvation Army critters for a group portrait. The cartoon expressions of these beasties range from befuddlement and alarm to kindly acceptance. It is truly a very funny tableau.

Where have we seen such a range of emotion in the art world? 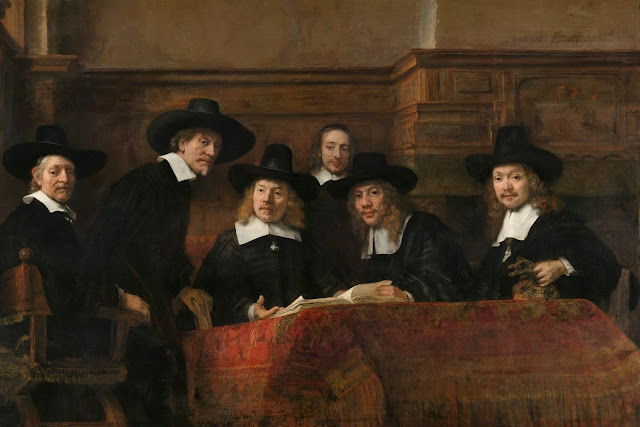 Rembrandt, The Syndics of the Clothmakers Guild, 1662

Rembrandt's Syndics of the Clothmakers Guild? Surely I jest!

Yes, but Syndics of the Clothmakers Guild is based on an underlying strata of humor. According to the most accepted interpretation of Syndics, Rembrandt depicted these officials responding to a challenging question during a policy-making meeting. It records a rather uncomfortable moment.

Syndics is unquestionably a masterpiece. But it is also a warm, funny evocation of the human comedy. From the suspicion and startled dignity of several of the syndics to the bemused look of the secretary behind them, we glimpse faces of men who have let the mask of officialdom slip down. For once, we see them, not as a group of "stuffed shirts," but as decent, if fallible, mortals like ourselves.

I suspect that there is a cartoon character or two in all of us. We don't need to arrange stuffed animals and find parallels with masterpieces like Rembrandt's Syndics to put a smile on our faces. Sometimes, a great painting will produce that effect without the need for props.

Titian was not especially well known for his sense of humor. Yet, in his Supper at Emmaus, Titian included a confrontation between a snappy, combative little dog and a gray tabby cat, poking its head under the table cloth. 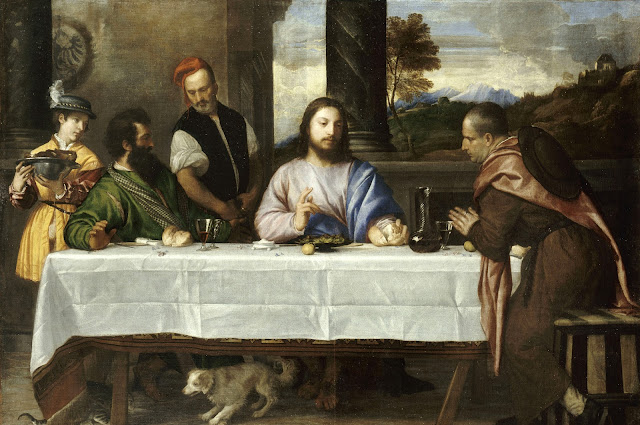 The Supper at Emmaus is one of the key events of Christian history. Following Jesus' crucifixion, two disciples met a stranger on the road to the village of Emmaus, a day's journey from Jerusalem. This of course was Jesus, risen from the dead. The disciples only recognized him when he blessed the bread for dinner. The story appears in the Gospel of St. Luke.

Titian, The Supper at Emmaus (Detail)

Nowhere does St. Luke mention a dog and a cat at the table at Emmaus. Other artists, Caravaggio and Rembrandt, painted this scene without any animal intervention. Why did Titian do so?

The first owners of this painting were the Maffei family from Verona, rather than a Catholic religious order. Perhaps, Titian wanted to include a homey detail or to show that the trifling details of life do not stop even when the Divine Presence is being manifested.

Whatever the case, Titian demonstrated that humor has a secure place in great art.

Anne and I spent a delightful half-hour arranging the Salvation Army animals for their "photo shoots."  One of the plush animals, a sweet, demure mouse, called to mind the subject of one of Renoir's greatest portraits. Renoir painted Adelphine Legrand in 1875, the year after the First Impressionist Salon and its dissappointing sales. 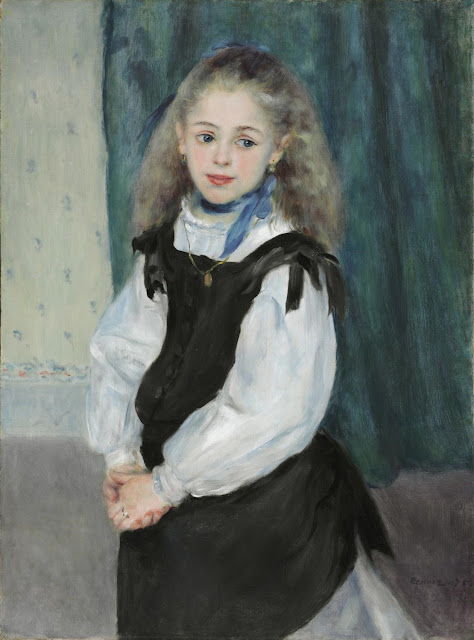 Adelphine Legrand was eight years old when Renoir painted her. This sweet, demure girl was just at the point in her life when she would no longer be a child but rather be Mademoiselle Legrand.

Adelphine's dolls and toys, counterparts of this little mouse, would have had to be set on the shelf or given away. This is part of the price of growing up and I could not help but reflect that this particular toy mouse surely had been loved and cherished by a modern-day Adelphine only a short time ago. 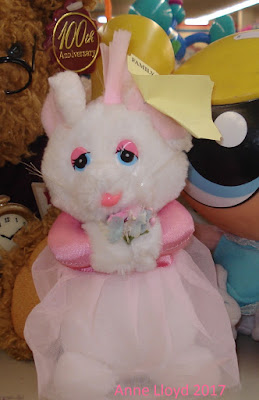 Life passes swiftly. Pleasant interludes such as Anne and I spent at the Salvation Army store come to an end almost as soon as they begin.

Yet occasions for humor, joy and inspiration should be cherished, however brief and wherever these take place. A museum gallery or an aisle in a Salvation Army store. You never know when or where an "art moment" may occur.

Text: Copyright of Ed Voves, all rights reserved. Images courtesy of the National Gallery of Ireland, Rijksmuseum, the Louvre and the Philadelphia Museum of Art, via Creative Commons. Gallery and  Salvation Army Store images courtesy of Anne Lloyd.