Renoir and Friends at the Phillips Collection, Washington D.C. 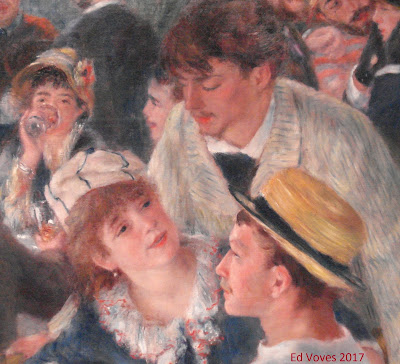 Renoir and Friends: Luncheon of the Boating Party

Impressionism derived a great deal of inspiration from Charles Baudelaire’s ideal of the "Heroism of Modern Life.”  In his review of the Salon of 1846, Baudelaire declared that "our age," the nineteenth century, "is no less rich than ancient times in sublime themes." Baudelaire went on to  assert "that since every age and every people have their own form of beauty, we inevitably have ours."

The heroes and heroines who created these new forms of beauty were men like Pierre-Auguste Renoir (1841-1919), his friend and fellow painter, Gustave Caillebotte, actresses Ellen Andrée and Jeanne Samary, journalist Adrien Maggiolo and the top-hatted patron of the arts, Charles Ephrussi.

Portrayed in a legendary painting by Renoir, Luncheon of the Boating Party, these kindred souls are re-united in an outstanding exhibit at the Phillips Collection in Washington D.C.

Renoir and Friends at the Phillips displays over forty Impressionist paintings, a rare bronze sculpture by Renoir and vintage photos from the late 1870's and 1880's. These works are grouped around Renoir's Luncheon of the Boating Party to document a key moment in the story of Impressionism.

"Heroism" is not too strong a word for the cultural achievements of Renoir and his talented friends. And like Hercules, these heroes of "everyday life" had occasionally to rest from their labors. 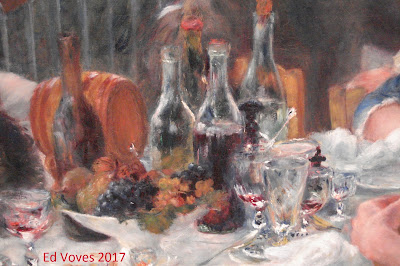 When they took a break, the Impressionists and their colleagues went to the Maisson Fournaise. This suburban restaurant became a legendary "hangout" like the Café Guerbois, in the heart of Paris, had been during the early days of  Impressionism.

The Maisson Fournaise was located in Chatou, about fourteen kilometers to the west of Paris. The restaurant overlooked the River Seine. For rowing and sailing enthusiasts like Gustave Caillebotte (1848-1894), it was the perfect spot to dock the boat for lunch, a round of drinks and the latest gossip. 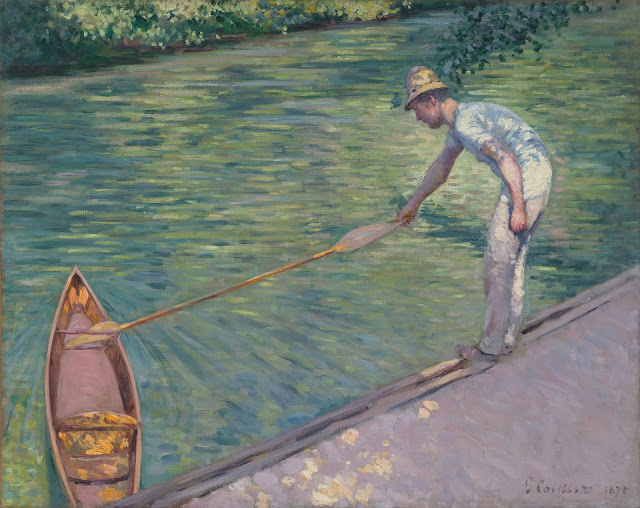 Renoir favored the Maisson Fournaise, too, so much so that he painted the convivial meals he enjoyed there with his friends. His picture, Luncheon of the Boating Party, is among  the greatest of all Impressionist works of art.

Painted over an extended period of time, 1880 to 1881, Luncheon is not an "all in one-sitting" Impressionist work. It is a masterpiece in the Old Master sense, recalling art by Rubens and Watteau. It is a labor of love, created at the high point of the Impressionist movement, which in five years would cease to be a united front as the member artists went their separate ways.

Luncheon of the Boating Party was recognized as a masterpiece right from the start. Its first owner was Paul Durand-Ruel (1831-1922), the principal art dealer for the Impressionists. It was only sold after Durand-Ruel's death. Luncheon entered the collection of Duncan Phillips (1886-1966), the art enthusiast who opened America's first museum of modern art, the Phillips Collection in Washington D.C. 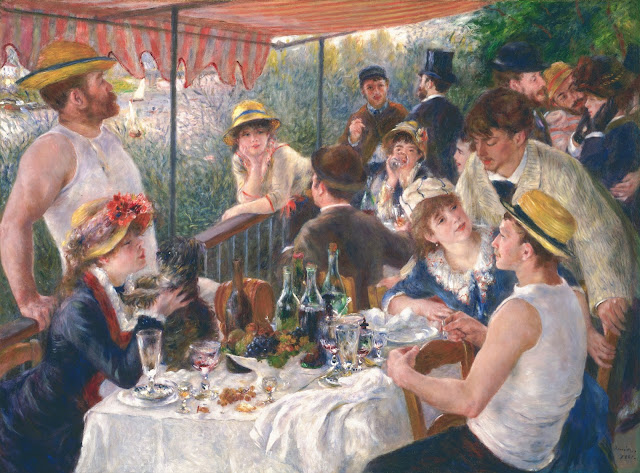 Phillips first saw Luncheon of the Boating Party in 1911 in Durand-Ruel's gallery. He was so moved that he wrote an essay praising the way that Renoir had conveyed "life's vivacity" in this memorable painting. When the opportunity appeared to purchase Renoir's magnum opus, Phillips paid Durand-Ruel's heirs the astronomical sum of $125,000.

That was in 1923. Eighteen months earlier, in 1921, Duncan Phillips had opened a small museum at his home, in Washington D.C. Phillips' museum was created to honor his beloved father and brother who had died during the Spanish Influenza epidemic of 1918.

Phillips' museum was a "heroic" endeavor worthy of Baudelaire's theme. Phillips aimed to create a collection representing the best in modern art. Of the 237 paintings at the museum's founding, 87 were works by masters of American impressionism, including Childe Hassam, John Henry Twatchman and Julian Alden Weir.

Acquiring Luncheon of the Boating Party was quite a coup by Phillips, enabling art lovers in the U.S. to contrast the works of American Impressionism with one of the signature paintings of the great Renoir.

For all his enthusiasm for Luncheon of the Boating Party, Duncan Phillips did not amass a collection favoring Impressionism, as did his rival, Dr. Albert Barnes. Phillips, in fact, ceased purchasing Impressionist works, except occasionally. After he bought Luncheon of the Boating Party in 1923. Phillips emphasized works by contemporary artists, especially Americans like Arthur Dove, John Marin and Georgia O'Keeffe.

Renoir and Friends at the Phillips is thus a perfect opportunity to investigate the birth of Impressionism in contrast with the subsequent development of Modernism. Almost all of the works in the exhibit (other than Luncheon) come from other museums, including the Musée d'Orsay and the Art Institute of Chicago, and private collections. One has only to move to nearby galleries at the Phillips to trace the cultural impact of Impressionism. 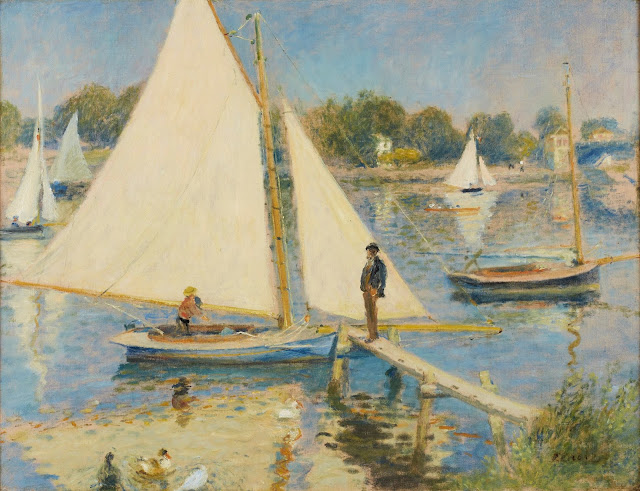 Pierre-Auguste Renoir, The Seine at Argenteuil, 1874

The Renoir and Friends exhibition is arranged with displays highlighting life and leisure along the Seine river. The Impressionists had long favored France's great river in their works. Monet along with Renoir had painted many scenes at Argenteuil early in the 1870's. Like Chatou, Argenteuil was a short train ride from Paris. Active, hardworking people from Paris came for a day in the country, through there are plenty of signs of industrialism and urban sprawl in the paintings of the Impressionists.

Other galleries in the exhibit are devoted to the women and the men we see relaxing in Luncheon of the Boating Party. Some of the greatest contemporary actresses of the period are depicted in Luncheon. These actresses are familiar faces as they often modeled for their painter friends. Ellen Andrée, who is draining a glass of wine in Luncheon, was the downcast protagonist in L'Absinthe by Edgar Degas. She certainly seems to be enjoying herself more in Renoir's painting.

I was especially pleased to see Renoir's A Girl with a Fan from the Clark Art Institute in  Williamstown, Massachusetts. I stumbled on the Clark many years ago during a New England vacation. A Girl with a Fan lodged in my memory with its blending of Impressionist technique and Old Mastery sensibility. Seeing this splendid work of art after all these years was like meeting an old friend. 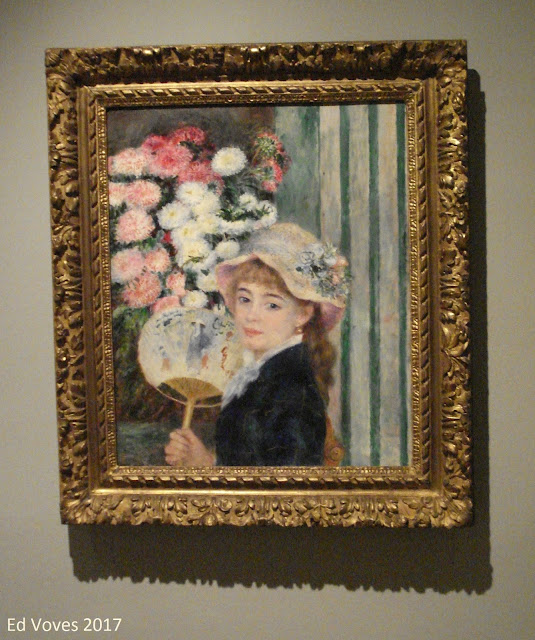 A Girl with a Fan is likely an idealized portrait of Jeanne Samary (1857-1890), one of the leading players of the Comédie-Française. The exhibit displays several photos of Jeanne Samary, who had a much fuller face than the young woman depicted in the painting. In one of the photos, the actress looks at the viewer with a big, friendly grin quite different from the demure smile of A Girl with a Fan.

In Luncheon of the Boating Party, Jeanne Samary is believed to be the woman holding her ears. Around the time that Renoir was painting Luncheon, Samary's name was frequently mentioned in the tattle columns of Paris newspapers. Her plans to marry the wealthy aristocrat, Paul Legard, had aroused the bitter opposition of his parents, The hands over her ears likely denote Samary's dismay about being the "talk of the town." 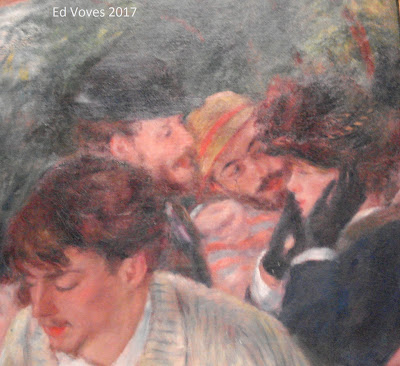 Frequent use of "believed to be" or "likely" may lead to the conclusion that sloppy guesswork was involved in trying to establish the respective identities of the "Boating Party." Instead, an incredible amount of scholarship, beginning with the efforts of the German art historian, Julius Meier-Graefe (1867-1935), has been devoted to the study of Luncheon of the Boating Party. 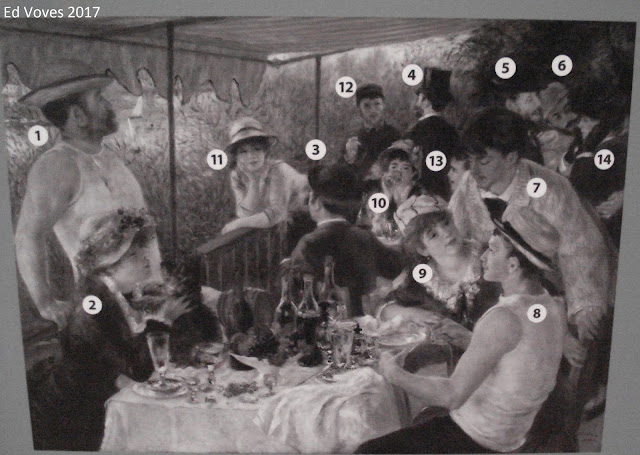 An elaborate chart of Luncheon is on view in the exhibition. Each of the identities or presumed identities of the protagonists is marked by number. The seated male character (number 8 on the right) looking out toward the river is certainly Gustave Caillebotte, yearning to get back to his boat. 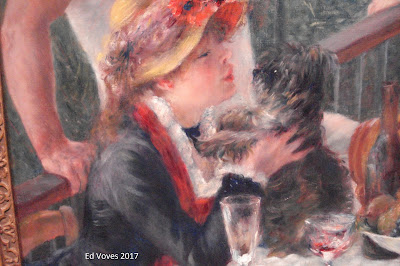 The young woman (number 2) playing with the little dog is Renoir's girl friend and soon-to-be wife, Aline Charigot. Just twenty years old in 1879, Charigot was a seamstress and thus came from a working-class background like Renoir. 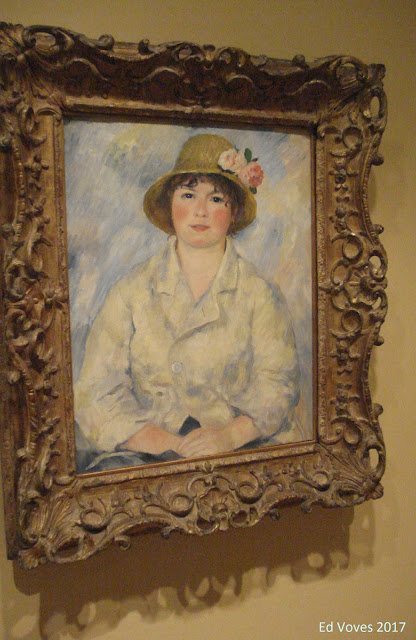 Once again, this is a somewhat idealized likeness. The wonderful portrait from the Philadelphia Museum of Art collection, painted around 1885, is much more accurate. The sitter was Madame Renoir by then and Renoir was clearly in love with the "unidealized" woman he married.

Why did Renoir include so many "somewhat idealized" portraits in Luncheon of the Boating Party? Renoir was the greatest portrait painter among the Impressionists. It was not for lack of talent, but rather, I think, because he was aiming to depict a "universal" moment, a meeting of minds, hearts and souls that would stand the test of time.

Renoir certainly devoted a great deal of effort to achieve this goal. The final gallery of the exhibit analyses the careful configuration of the protagonists which Renoir devoted to Luncheon of the Boating Party.

Detail comparison of Luncheon of the Boating Party, infrared photo at right.

An infrared photo of Luncheon, shows that Renoir changed the angle of the head of Charles Ephrussi (1849-1905), wearing a top hat in the background. At first, Renoir had Ephrussi looking toward the river, as he did with Caillebotte. But then he shifted Ephrussi's gaze toward his companion, believed to be Jules Laforgue. Ephrussi was the editor of the influential Gazette des Beaux-Arts and Laforgue was his personal secretary. Business, as well as pleasure, was the subject of conversation at the Maisson Fournaise.

Renoir's Luncheon of the Boating Party recorded a special moment in French history as well as representing universal human qualities and aspirations. When displayed at the Seventh Impressionist Exhibition in 1882, Renoir's painting was the hit of the exhibit.

The 1880's, however, were a tense period in French history. The decade was marked by bank failures, the Boulanger Affair which nearly toppled the Third Republic, the rise of anti-Semitism soon to ignite the Dreyfus Affair. Renoir, by most accounts a splendid man, succumbed to anti-Jewish feeling and turned on Charles Ephrussi, who came from a distinguished Jewish banking family.

Happiness, alas, never lasts for long. Perhaps that is why Luncheon of the Boating Party strikes such a chord with so many people.

What we see happening at the Maisson Fournaise in 1879 is a moment in Paradise Lost. Brief, transitory, heart-warming and heart-breaking. Such moments are short-lived, except in our memories and in the paintings of Pierre-Auguste Renoir.

Detail comparison of Luncheon of the Boating Party, exhibited at the Phillips Collection, Washington D.C.

Posted by Art Eyewitness at 5:12 PM