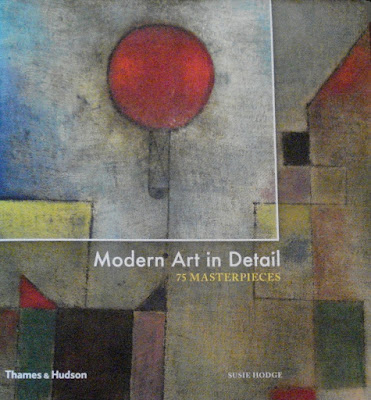 Works of art are frequently the objects of disagreement and controversy. In 1927, a polished bronze sculpture, entitled Bird in Space, achieved the status of Exhibit A in a celebrated legal case, Brancusi vs. the United States.

Bird in Space, or rather a marble version of the notorious bronze, also features prominently in a new book, Modern Art in Detail: 75 Masterpieces. As the title of her book proclaims, author Susie Hodge considers Brancusi's abstract depiction of a soaring bird a great work of art.

Officers of the U.S. Customs in 1926 saw Bird in Space quiet differently. Or rather, they were unclear of what it was. When the wingless metal object was first brought into the United States, Customs Officers designated it as a "miscellaneous household good." The owner of Bird in Space, the noted photographer Edward Steichen, was thereby liable for the payment of a tariff duty of $240. Had it been listed as an “original” work of art, Bird in Space would have been allowed into the country duty free.

Steichen and Brancusi refused to accept the Customs Department ruling and filed suit.

The ensuing court case established the artistic status of Bird in Space beyond a doubt.  Had it been available, Hodge's enlightening analysis would have saved U.S. officialdom a lot of trouble. Yet, nearly a century later, we still need a book like Modern Art in Detail because controversy and avant-garde art still go along, "hand in hand." 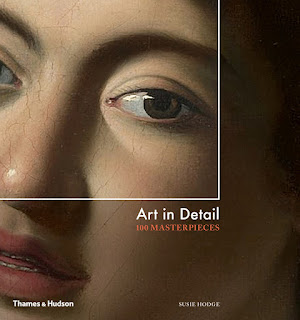 Modern Art in Detail: 75 Masterpieces is a worthy successor to Hodge's Art in Detail: 100  Masterpieces. Published in 2016, Art in Detail covered the wide expanse of art history beginning with Giotto's Arena Chapel frescoes (1305) and extending to the present era.  Modern Art in Detail profiles some of the artists who appeared in the final chapters of the earlier book. But Hodge picks a new art work to be examined for those returning masters - Pablo Picasso, Henri Matisse, Rene Magritte - so there is no repetition.

Hodge does repeat the same format used in Modern Art in Detail. Each artist is represented by a significant work of art, which is treated to incisive analysis, both for its topic and artistic technique.

Hodge begins each chapter with a brief biographical essay of the artist in question, positioned next to a full-page (sometimes larger) illustration of their signature works of art. Despite the brevity of these bio sketches, Hodge manages to provide revealing details of the lives of these artists that explain much about their art.

Then, in the following pages, this work of art is divided into a number of framed "points of interest." Hodge focuses upon these, noting key factors ranging from contemporary events which influenced the artist to the choice of colors or materials used to create this masterpiece.

Paul Gauguin, Where Do We Come From? What Are We? Where Are We Going? 1897-98 Museum of Fine Arts, Boston

Hodge's technique is exemplified by her analysis of Paul Gauguin's Where Do We Come From? What Are We?  Where Are We Going? One of the treasures of Boston's Museum of Fine Arts, this late Gauguin masterpiece was painted upon a rough piece of sackcloth. This, as Hodge notes, was all Gauguin could afford, living destitute in Tahiti.

Where Are We Going? needs to be read from right to left. Its theme is much more profound than a rejection of Western morality for a return to a natural lifestyle. This is a painting which charts the journey of life, in this world and beyond. 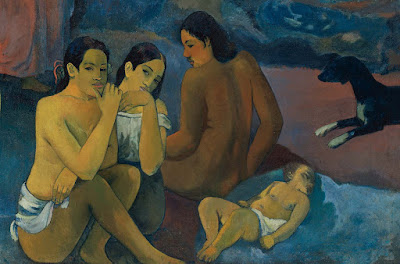 The ages of the women posed in the foreground of the painting represent the stages of life, from birth to the brink of death. The black and white dog entering the picture from the extreme right is believed to symbolize Gauguin. 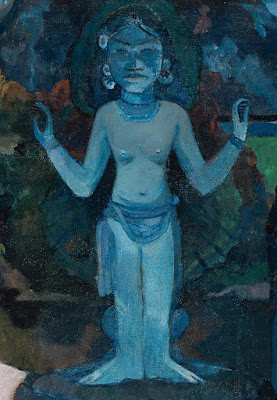 Hodge in her analysis of the striking blue idol points out that Gauguin positioned a goat and a cat near to the statue. These animals are believed to have a "sixth sense or a spirituality that humans have lost." 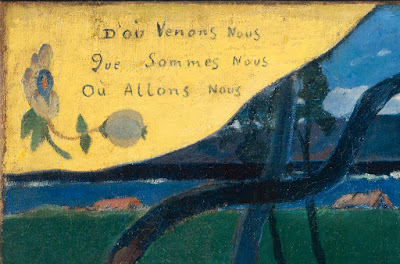 In the left-hand corner of the painting reads the three questions of the work's title, profound, mysterious and unanswerable.

This insightful treatment of Gauguin's painting is repeated for each of the other seventy-four modern masterpieces. Whether you have seen these works in person or only on the pages of art books, Hodge always provides insightful commentary. 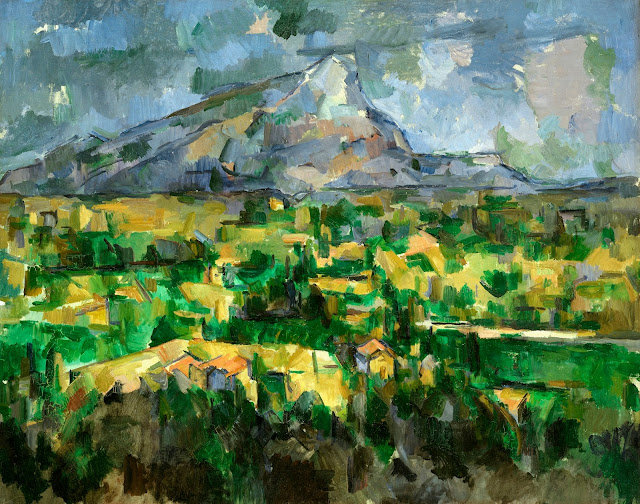 In the case of of Cezanne's Mont Sainte-Victoire, painted a few years after Where Are We Going?, Hodge pays close attention to Cezanne's brushstrokes. She notes that these "angled marks are methodical and rhythmic."  We can literally see Cezanne's focus "on the underlying structure  of the elements" of this pivotal work, setting the stage for Picasso, Georges Braque, Fernand Leger, Juan Gris and other artists who would launch the Cubist Revolution.

All of these Cubist masters receive their due in Hodge's book. Picasso's Les Demoiselles d'Avignon, painted in 1907, receives a thorough examination, as does Braque's The Portuguese. With these innovatory masterpieces, Cubism seemed poised to become the new "classicism" of Western art. But that of course did not happen. No school of art, no "ism" would define - or confine - Modernism into a single orthodoxy.

That one standard of ideology did not prevale was not for lack of trying. In the wake of the Bolshevik Revolution, iconoclastic artists like Kazimir Malevich and Vladimir Tatlin tried - and failed - to institute a new aesthetic order for Soviet Russia. 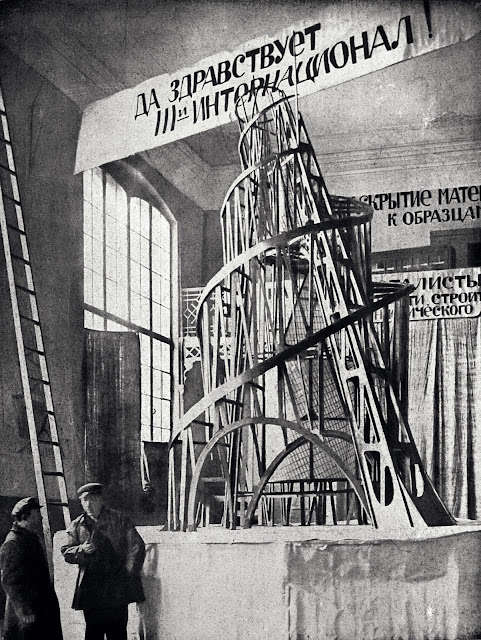 Tatlin's Monument to the Third International was never built but served as a  model for starry-eyed nonsense like Lincoln Steffens' remark, "I have seen the future, and it works."

One can only be relieved that this Babel-scaled edifice was never constructed. Designed to be taller than the Eiffel Tower, with rotating rooms and a searchlight for beaming Communist slogans on to clouds above, this monstrosity would likely have collapsed, killing hundreds, if not thousands, of people. Today, Tatlin's prototype exists only in a model in the Tretyakov Gallery in Moscow.

Tatlin subscribed to an ideological agenda called "Constructivism." It was but one of many artistic "brave new worlds" which came and went during the early decades of the twentieth century. Realism, pronounced dead or dying, somehow survived. In the hands of a true master like Edward Hopper, the existential meltdown of modern man was depicted with an intensity that even a Surrealist work by Salvador Dali could not match. 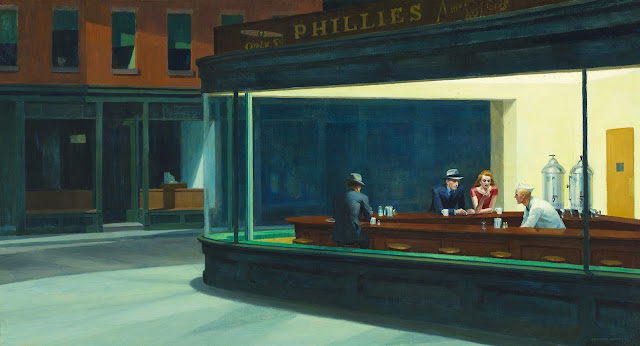 Hopper's Nighthawks are separated from the darkened urban street by the plate glass window and the glow of fluorescent light. But inside the diner, within the seeming safety of the restaurant, each of the nocturnal wayfarers is locked in an invisible prison with walls composed of alienation, separation and despair.

Flash forward from 1942 to 1968. The walls of galvanized steel of Eva Hesse's Accession II replace the barriers of glass, glaring light and repressed emotion of Hopper's Nighthawks. Thousands of strands of thin rubber tubes bristle from within the metal box.The meaning of this enigmatic work, like so much of the art produced following World War II, is anyone's guess.

We have to think "inside the box" to find our answer. But what clues are there to guide us? This could be an inner sanctum, a padded cell or a Black Hole. Usually, Hesse's work is given a feminist interpretation. Hodge notes that Accession II "references the 'masculine' - the rigid geometric box and the 'feminine' - the flexible, soft tubing." 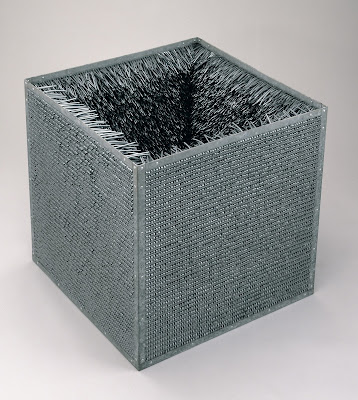 Hodge's explanation, while certainly plausible, is curiously limiting. Looking at this mystifying image, I recalled that Hesse created Accession II in the same year as Stanley Kubrick's film, 2001 - A Space Odyssey. Like the black monoliths that appear at different intervals in 2001, Accession II confronts us with the ideal of potential and possibility. It is a treasure for the future, a "miscellaneous household good" whose form and functions we have yet to fully comprehend.

Eva Hesse (1936-70) was an innovator in the way that she used "odds and ends" to create compelling, if difficult to comprehend, works of art. The legacy of her tragically short life and career, however, is mixed. Frankly, I find it difficult to accord the status of masterpiece to some of the "mixed media" works that have appeared in the years following Hesse's early death at the age of 34, from cancer.

Is a stack of smashed TV sets like Nam June Paik's TV Cello (1971) a true work or art? Does a pretentious title, The Physical Impossibility of Death in the Mind of Someone Living (1991), turn a dead Tiger Shark suspended in formaldehyde into a masterpiece? Can great art be "assembled" rather than created?

Hodge cannot be faulted in her analysis of these controversial works. And she certainly has the right to select art works that she deems as masterpieces for her book.

However,the failure to include classic works of photography among Hodge's array of masterpieces seems an unaccountable omission. Modern Art in Detail would have been enriched by the presence of Steerage by Alfred Stieglitz (1907) or Henri Cartier-Bresson's vertigo-inducing photo of a boy riding a bicycle through the winding street of a French town, Hyères, France (1932).

More to the point, analysis of such classic photos would have provided a foundation for understanding Bill Viola's provocative video, Martyrs (Earth, Air, Fire, Water), one of the final works studied in Modern Art in Detail. 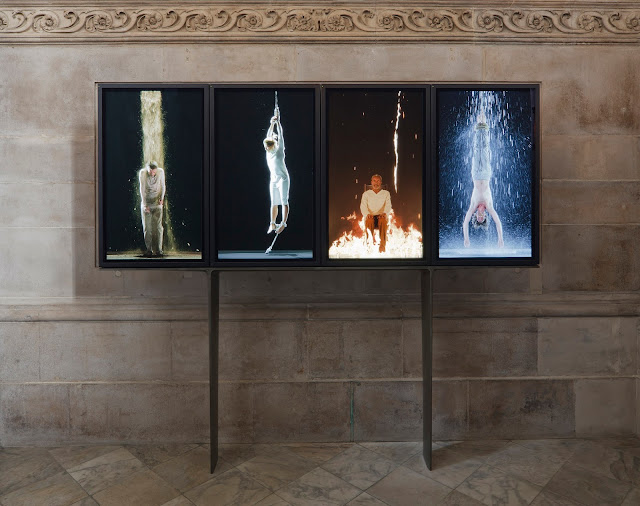 Viola's Martyrs is a searing indictment of humankind's inhumanity. It certainly deserves inclusion in Hodge's book. Yet, for all of its power, this video is artificial. It is a simulation rather than an act of creation or documentation.

Nick Ut's photo, Napalm Girl, comes immediately to mind when considering photography as a visceral rather than a virtual art form. This horrifying image of a Vietnamese child, Kim Phuc, set on fire by an incendiary bomb in 1972, deserves the status of masterpiece. It deserves to be studied in detail. It needs to be remembered, so that art does not decline into the production of glorified "selfies" and little else.

That is a heavy and perhaps unfair burden to place on Susie Hodge. After all, she has provided art lovers with two thoughtful books, Art in Detail and Modern Art in Detail.

May we hope for a third book in Hodge's well-tried format, Classic Photography in Detail?Such a book would complement her already published volumes and create a trilogy of art books destined to enlighten and challenge art lovers for a long time to come.

Images Courtesy of Thames & Hudson.  Close-up images of Paul Gauguin's Where Do We Come From? courtesy Museum of Fine Arts Boston