David Hockney at the Metropolitan Museum of Art 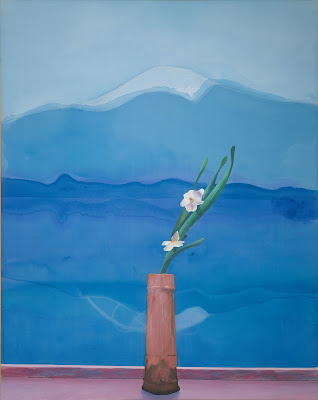 It is premature to use the word "retrospective" in regard to the life work of David Hockney. The major new Hockney exhibit at the Metropolitan Museum of Art is best thought of in terms of the word "reappraisal." Brilliant works are on view, lots of new insights for the taking - and no end in sight to Hockney's creative power.

David Hockney at the Met appeared at Tate Britain earlier in 2017. The subtitle of the Tate show was well-chosen: Sixty Years of Work. This brilliantly-curated exhibit surveys every phase of Hockey's prodigious career, from his "five minutes" of Pop Art in the early 1960's to the current landscapes of his native Yorkshire like A Closer Winter Tunnel, February-March, painted in 2006.

To the delight of journalists and the Metropolitan staff, Hockney appeared at the Met's press preview shortly before Thanksgiving. Dressed as if he had just come in from the tree-lined lanes near his home in Bridlington, Yorkshire, Hockney seemed a bit out of place in the crowded museum gallery. But when he looked up from under the brim of his cap, the probing gaze of a great artist was very much in evidence. 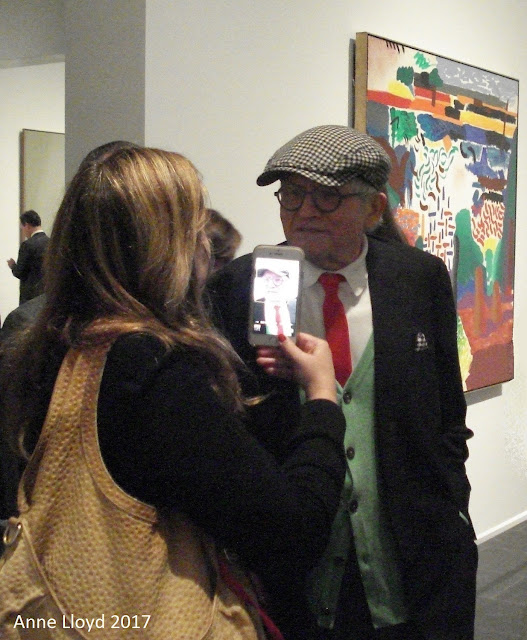 Hockney was born in 1937. He is one of the last generation in Britain born before the advent of television. Hockney grew-up looking at the "big picture" - of nature and the movies, to which he has been addicted since childhood. This is an important point which explains much of the form and content of his art.

Hockney emphasized his life experiences in a series of interviews in 2006 with the British art historian and critic, Martin Gayford. These interviews  were published in the book, A Bigger Message: Conversations with David Hockney (Thames & Hudson, 2016, 2nd edition).
Hockney is well-versed in art history and he quoted to Gayford the proverbial wisdom of Chinese sages that artists "need three things for paintings: the hand, the eye, and the heart."

All three in combination - the hand, the eye and the heart - are necessary. Two won't do.

Hockney  believes that this ancient wisdom is "very, very good." From the incredible array of works on view at the Met, it is clear that he possesses all three attributes in abundance, along with amazing resilience and vitality.

"I seem to have more energy than I did a decade ago, when I was sixty," Hockney told Gayford. "The Chinese are very good on the subject of art. Another saying of theirs I very much like is that painting is an old man's art, meaning that the experience of life and looking at the world accumulates as you get older."

Hockney's first major works from the early 1960's show references to the color field painting of Abstract Expressionists like Kenneth Noland and Frank Stella. These "Ab Ex" elements were integrated into works bearing strong figurative and narrative content.  Hockney's Rocky Mountains and Tired Indians,1965, is a prime example of his acknowledgement of the waning influence of "Ab Ex" art as the 1950's gave way to the "swinging 60's.". 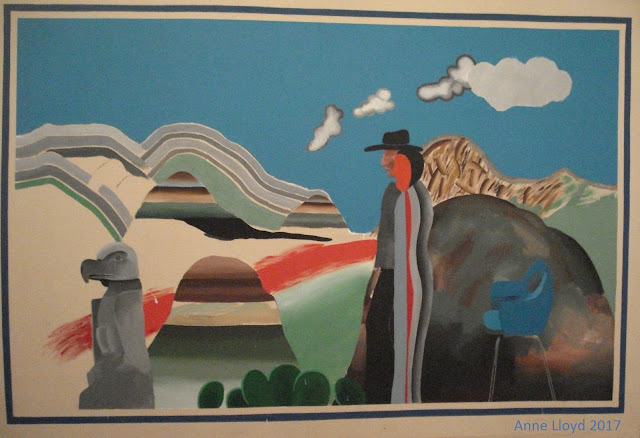 Hockney came of age just as it became obvious that "Ab Ex" was not to be going to become the new, universal classicism. Hockney dabbled with Pop art too, as can be seen in the painting of a box of tea packets, Typhoo Tea, the band he drank at home in Yorkshire. 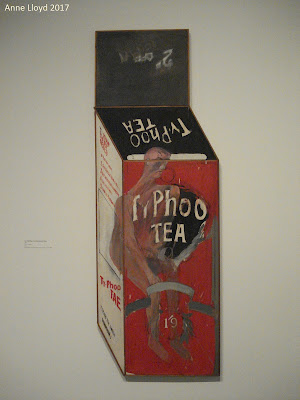 Hockney's Tea Painting in an Illusionistic Style was painted while he was a student at the Royal College of Art. It was one of four works, each painted in a different style, that Hockney exhibited in the 1962 Young Contemporaries student show.

If one is going to focus on a definitive influence on Hockney, I think his comments to Gayford about the power of cinema are worthy of consideration. Growing up in Bradford, Hockey went to the movies regularly, as most people did before television. He and his family sat in the cheap seats, close to the screen. Immersed in the "big picture," the young Hockney developed an eye for detail. 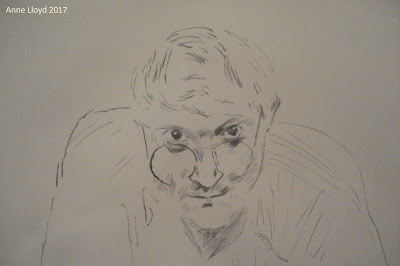 "I've always had intense pleasure from looking...," Hockney commented to Gayford.
"Looking is a very positive act. You have to do it deliberately."

In speaking with Gayford, Hockney compared this super-engaged attentiveness with the sharpened perception of combat troops. In the battle zone, every nerve of a soldier's eyes is engaged in detecting the presence of danger. Hockney told Gayford that he was impressed with the term that American GIs in Vietnam used to describe such heightened visual sensitivity: "eye-fucks."

"It might have been the only time in their lives when they looked with that intensity," Hockney said.

While the Vietnam War raged, Hockney looked - and lived - with intensity in California. Hockney's A Bigger Splash shows how he embraced the California lifestyle and the use of new artistic materials, in this case acrylic paints. 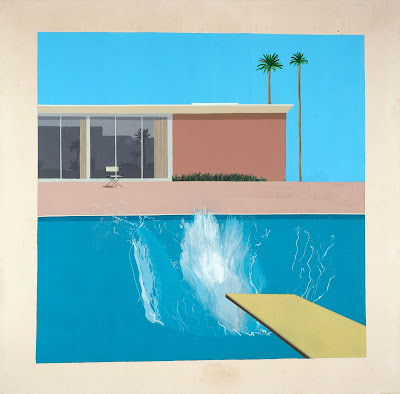 In this sensational painting, created in 1967, we see only the spray of water, revealing that a swimmer, perhaps Hockney himself, has plunged below the cool, glassy blue surface of the pool.

The culmination of Hockney’s California experience during the 1960’s was painted in 1972. The tremendously moving Portrait of an Artist (Pool with Two Figures) was actually created near Saint-Tropez in the south of France. But the whole “feel” of the picture is California, a tribute in part to the success of Hockney’s work in spreading the appeal of the California lifestyle to Europe. 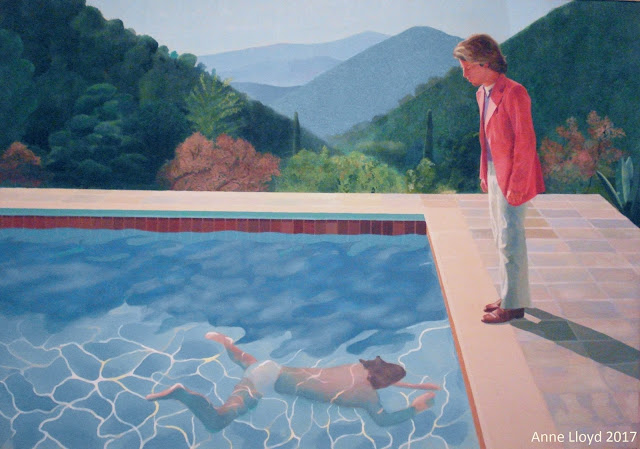 The clothed figure is Peter Schlesinger, who for five years had been Hockney’s partner. Their break-up, devastating to Hockney, was recorded in a 1971 painting devoid of any human references except for Schlesinger’s sandals, left by the pool side.

A year later, in Portrait of an Artist, Hockney placed Peter Schlesinger back in the picture. Previously he had painted Schlesinger in the nude, in swimming pool scenes. Here, he is a fully-dressed, melancholy figure. Hamlet in a summer sport coat. 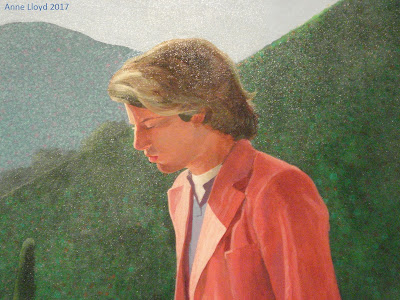 Schlesinger is forever separated from the swimmer doing the breaststroke in the cool aqua water. But it is not his clothing that keep Schlesinger transfixed to the tiled deck of the pool. Rather an emotional barrier, unseen but very palpable, stands between him and the sensually inviting life that he had enjoyed in Hockney's company so many times before.

Portrait of an Artist is really several paintings, flawlessly combined by Hockney into a work of almost cosmic intensity. There are three separate planes of existence: the swimmer in the pool, the almost statue-like Schlesinger and, off in the background, a glorious expanse of verdant, hilly terrain that looks like heaven brought to earth.

This sublime landscape exerts a living presence, as well as foreshadowing the large-format landscapes of Hockney’s recent years. These, as we will see, are composite works also, seamlessly integrated to create a greater, grander whole.

Following the break-up with Schlesinger, Hockney visited Japan, searching for inspiration. But Hockney was disappointed. Japan was heavily industrialized by this point. He was also  struggling with the constraints of naturalism in painting, the very genre which he had so brilliantly articulated in 1960's California.

Hockney's greatest work from his Japanese trip - and it is one of his most famous - was painted after he returned. Hockney did not work from notes or sketches but rather used a souvenir postcard and a book on flower arrangement as his references for Mt. Fuji and Flowers, the introductory work to this review.

Amazingly, Hockney painted Mt. Fuji and Flowers with acrylics, rather than oil paints. Considering the delicacy of brushstroke and the subtle, ethereal feel to this work, a treasure of the Metropolitan's collection, one would be forgiven for assuming the opposite.

Looking at Mt. Fuji and Flowers produces an elegiac feeling. Was Hockney bidding farewell to the sunlit skies and shimmering blue water of his 1960's California pictures? It is had to escape the feeling that this was so.

Following Mt. Fuji and Flowers, Hockney embarked on an ambitious, almost obsessed exploration of every conceivable form of painting, photography and related technology, including the iPad, which Hockney uses as a sketchbook. This search, which continues to the present day, was less about finding a signature style than to reach beyond the existing boundaries of the visual arts, while remaining rooted in the world. 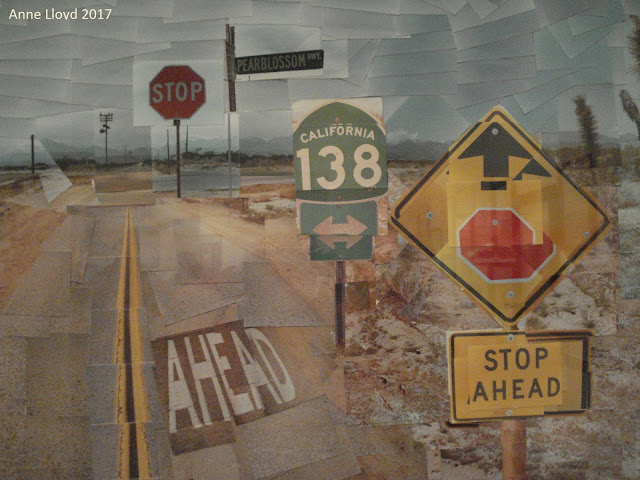 The Met exhibition has notable examples of Hockney's explorations, notably the magnificent photo collage, Pearblossom Hwy, 11th-18th April 1986, #1, and a fabulous selection of portrait sketches, including Celia in a Black Dress with White Flowers (1972). 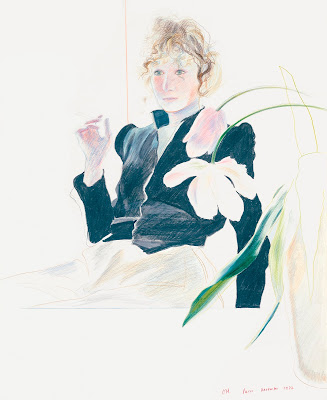 David Hockney, Celia in a Black Dress with White Flowers (1972)

Pearblossom Hwy. is without a doubt one of the most innovative landscapes of recent times. The crayon portrait of Hockney's friend Celia Birtwell was later used as the exhibit illustration for a display of Hockney's drawings and prints at the Tate Gallery. It can hold its own with the sketches of Ingres. Hockney is truly a living master of art.

Hockney also has a great sense of humor. In his interviews with Martin Gayford, Hockney mentioned that one of his favorite films is Who Framed Roger Rabbit, the partly animated movie released in 1988. 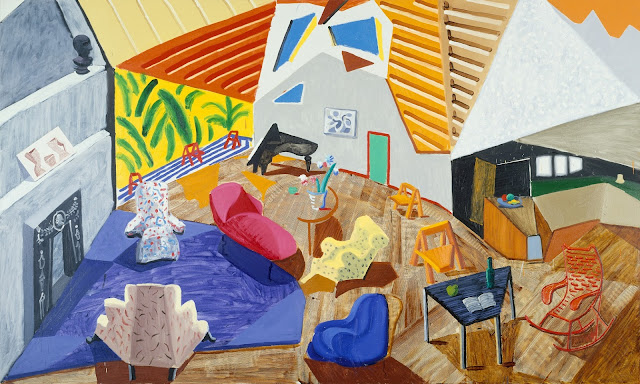 The same year, Hockney painted a "cartoonscape" of his own. Large Interior, Los Angeles, presents an ensemble cast of anthropomorphic furniture inhabiting an M.C. Escher-like family room. Each chair or sofa has taken on the personality of whoever had been sitting there. It is a very amusing work, but the really amazing thing about it is how "real" it seems. Once you suspend judgement - as you do when you are watching a talking rabbit in a film noir setting - this is a totally believable work of art.

From this diverse repertoire, Hockney moved on to his present oeuvre, large format landscapes. These are painted directly from nature, but on several panels simultaneously. Hockney uses digital photos to keep track of his work, as he goes along. There is a parallel here with his cogently argued claims that Vermeer and other great masters from the seventeenth century used a camera obscura or some other lens apparatus to aid their work.

If that is so, then Hockney is in good company. But Vermeer's artistry and Hockney's is primarily the product of the good hand, eye and heart that the Chinese sages extolled so long ago. 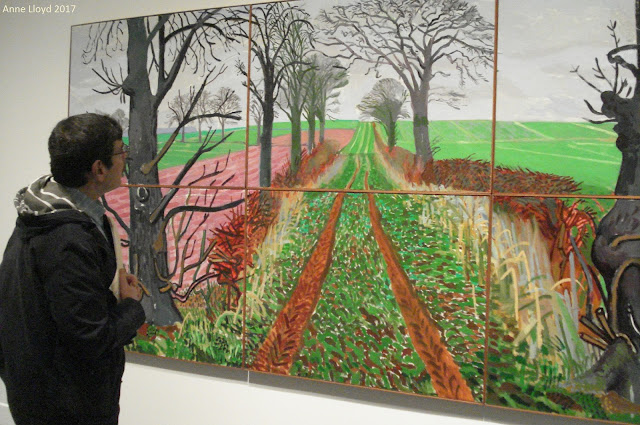 Hand, eye and heart are clearly in evidence in the depiction of one of Hockney's favorite Yorkshire scenes, a tree-line track he calls the "Tunnel." I was struck by his generosity of spirit. as well as his skill. Looking at the way he presents his beloved landscape, from the spot where he stood to paint it, we are enabled to see and feel for ourselves what Hockney's sees and feels.

That is no small distinction. Hockney's hand, eye and heart bids us to appreciate this landscape with our eye and our heart. And then, so moved, we are motivated to create something beautiful or meaningful with our hands.

What a gift to the world, David Hockney has made of his life work and his life story! And there are more chapters yet to come! Of that, I am sure.
***
Text: Copyright of Ed Voves, all rights reserved
Photos courtesy of the Metropolitan Museum of Art and Anne Lloyd

Posted by Art Eyewitness at 9:50 AM