Wayne Thiebaud, Draftsman at the Morgan Library and Museum 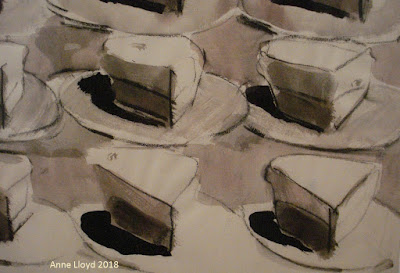 As I reflected on the Wayne Thiebaud exhibit at the Morgan Library and Museum, a jingle from my movie-addicted youth popped into my head.

"Let's all go the lobby and get a tasty treat!"

The dancing ice cream bar, the cheerful looking soda cup and, most of all, the popcorn container (sometimes depicted with a big smear of lipstick and "come hither" eyes) appeared on the silver screen in 1957. Its aim was to entice film fans to buy over-priced edibles. The movie ad is an unforgettable example of the power of suggestion.

So too are many of Wayne Thiebaud's drawings on view at the Morgan. Thiebaud, already an established artist, gained acclaim - and sales - in a 1962 New York City gallery show filled with images of America's favorite desserts and snacks. These instantly recognizable pictures of slices of pie and cake, hot dogs, candy apples and ice cream cones testify to the powerful appeal to indulge our taste buds.

There is, however, a lot more to Thiebaud's work. Initially, he was styled as a Pop artist due to superficial similarities to Andy Warhol's soup can paintings and prints. Thiebaud never rejected being affiliated with Pop Art but emphasized his links to Realism.

"I see myself as a traditional painter," Thiebaud declared in a 1974 interview. "I’m very much interested in the concept of realism and the notion of inquiry into what the tradition of realism is all about.” 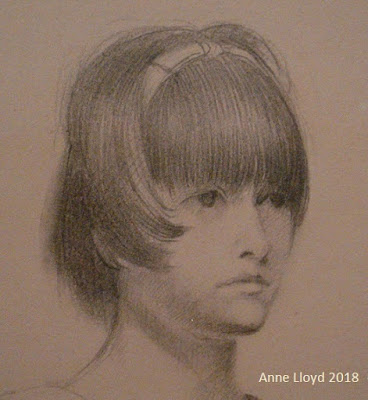 Ultimately it is the power of art that we recognize in Thiebaud's provocative, often powerful, images.  And it needs to be emphasized - as the Morgan exhibit does - that Thiebaud is a superb landscape artist and an accomplished portraitist, especially his portrait drawings.

Yet, it is worth noting that Thiebaud signature arrays of pie slices, ice cream cones and other treats have a special "something" about them, a quality that reaches beyond Realism as well as Pop. Like the taste of the petites madeleines in Proust's Memories of Things Past, the images of pie slices or a gumball machine trigger recollections we have seemingly forgotten or hardly perceived to begin with. 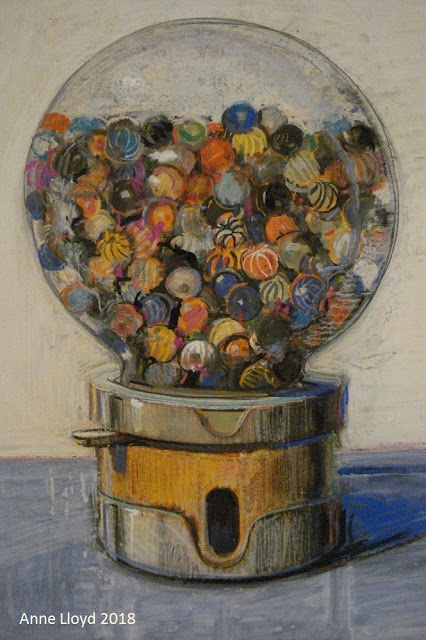 Let your eyes savor a Thiebaud picture of lemon meringue pie slices and you start thinking about childhood trips to a diner. Look closely at the exquisite depiction of a vintage candy machine and you'll start reaching into your pockets for change to plunk into the coin slot and get a handful bubble gum balls. In both cases, you are not looking at a still life. You are in the realm of memory.

For Thibaud, learning is doing and vice versa. In the process, Thiebaud mastered the craft of drawing to a degree that would have gained him positive reviews from some of the old masters he esteems,  Jean-Baptiste-Simeon Chardin (1699-1779) and Thomas Eakins (1844-1917).

Indicative of Thiebaud's work are three works grouped together in the Morgan display. These are variations on a theme, each dating to 1964. 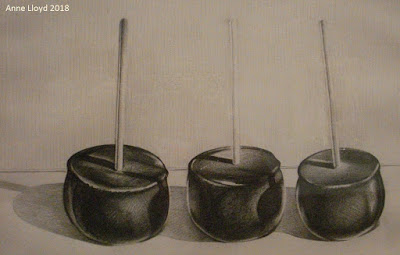 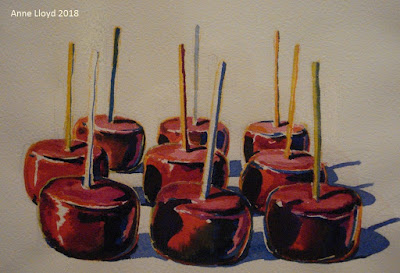 
Three Jelly Apples, created with graphite, Nine Jelly Apples, watercolor and graphite, and Candied Apples, done with brush and ink, are inspired works in their own right. Viewed together, these multiple images are a consummate demonstration of Thiebaud's mastery of the draftsman's tool kit.
Thiebaud was born in Mesa, Arizona, in 1920. Growing-up in California, Thiebaud worked briefly for Disney Studios during a summer break in high school. Thiebaud drew “in-between” scenes for Disney cartoons and had visions of becoming a cartoonist or comic book illustrator. During World War II, he produced cartoons for U.S. armed services magazines, followed by commercial work for Universal Studios and the Rexall Drug Company.

Thiebaud's early shows the huge influence of graphic art during the 1930's and 40's. This was the great age of comic books, "pulp" magazine illustration and advertisement art. Thiebaud tried his his hand in these genres and his early, examples of which  are on view in the Morgan exhibit, show that he could have achieved success in commercial art. 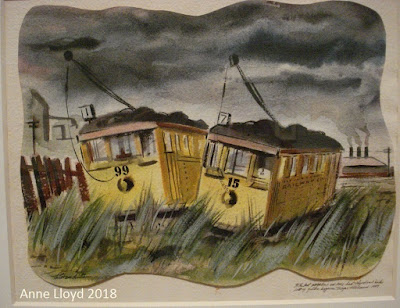 Thiebaud used the GI Bill to earn a master’s degree in art from California State College, Sacramento. This achievement was to set him on the true course of his life's adventure in art.

Significantly, Thiebaud's degree was in in studio art and art education. He began teaching art, first at Sacramento City College, then at University of California, Davis, 1960 to 1991. In keeping with the spirit of American art duing the 1950's, Thiebaud experimented with the techniques of Abstract-Expressionism. He took a sabatical in 1956 and journeyed east to New York City.

While in NYC, Thiebaud got to know the Cedar Cafe crowd and talked painting technique with Willem de Kooning, among others. But he started drawing objects in the crowded windows of New York stores rather than "urban abstract landscapes." Before long Thiebaud's memory served up bounteous images of pies, cakes, donuts and sandwiches, which had been served in the diners where he had worked when young. Thiebaud's signature style had emerged.

Thiebaud's "eats" are what we call today "comfort food." There is a reassuring aspect to pie wedges and hot dogs. Familiarity does not breed contempt.

These images can be a bit alarming, however, especially when you see a lot of them in an exhibition like the Morgan's.  It is easy to see how critics and art patrons confused Thiebaud's pies with Andy Warhol's oeuvre. The mechanization of food stuffs, whether pastries in a diner display case or tomato soup cans on a supermarket shelf, can lead to a "glut" - of food and of images of food. 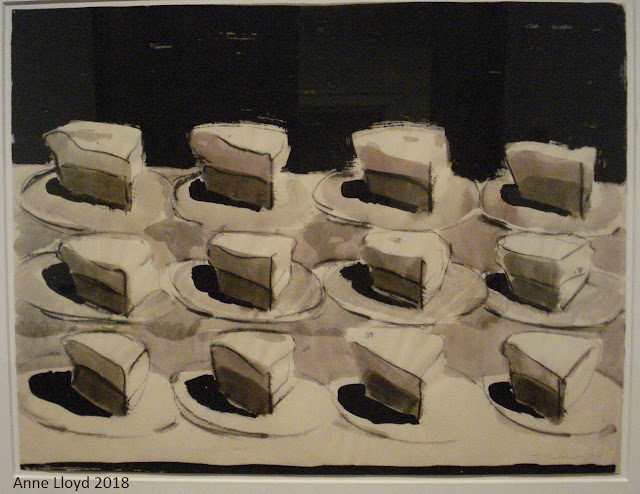 When the East Coast intelligentsia first studied Thiebaud's art, they projected social criticism into his drawings and paintings. By doing so, they created an agenda for his art which Thiebaud did not espouse. Thiebaud depicted America as it is, without apologies or complaint. In a 2017 interview the British art writer, Martin Gayford, Thiebaud noted:

After all, I am an American. I’ve driven across the country, and you see the same thing in every restaurant from Sacramento to New York. The same meringue pies. So it began to make a lot of sense to paint them – and it was very intriguing.

Thiebaud happens to enjoy eating lemon meringue pie, as well as drawing the tart, gooey dessert. Indeed, enjoyment is an integral component of his work. Thiebaud does not "celebrate" American abundance or life-style in the way that Soviet "social realism" lamely - and unsuccessfully - tried to do under Stalin. But he does present the good things of everyday life  in the U.S.A., just as painters in ancient Egypt filled the frescoes of tombs with images of foodstuffs for the afterlife as they conceived it.

Thiebaud's flirtation with "Ab-Ex" before settling on his signature Realism mirrors the struggle of American artists down through history. From John Singleton Copley onward, American artists confronted the choice of European and European-inspired art or subjects and motifs from the good-old U.S.A. The villas of Tuscany or the Hudson Valley. Cubism or the Ash Can School.

Wayne Thiebaud chose America. But he did not focus his vision away from the future or from Modernism. 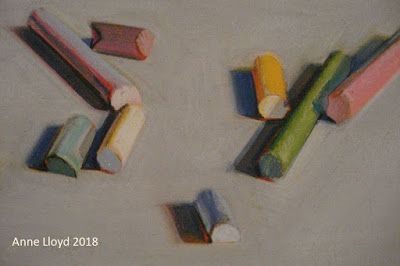 Thiebaud's Pastel Scatter is a still life very much in the tradition of John Frederick Peto. The pastel pieces tromp l'oeil just as Peto's candle sticks, flintlock pistols and crinkled letters did. You know these are just pictures but you want to pick theme up just the same. Moreover, Thiebaud treats these simple shapes with such astonishing facility of light and color that they have an effect on the mind not unlike a Rothko mural.


The same is true of Thiebaud's landscapes. He has acknowledged the influence of early American folk paintings and the work of Richard Diebenkorn. Yet, the 1972 pastel Rock Ridge or the drawing in charcoal from around 1980, River Sides are pure Wayne Thiebaud. 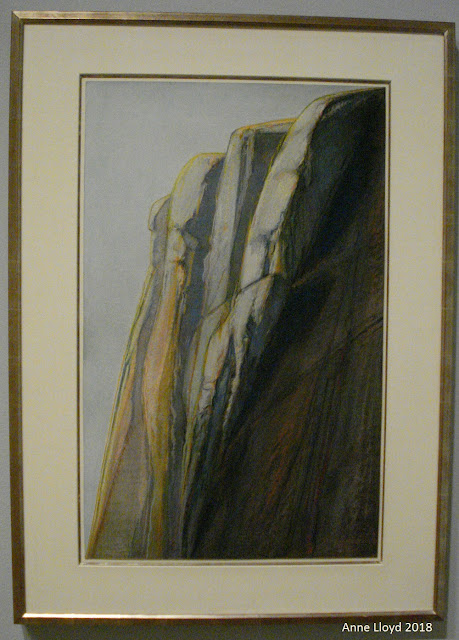 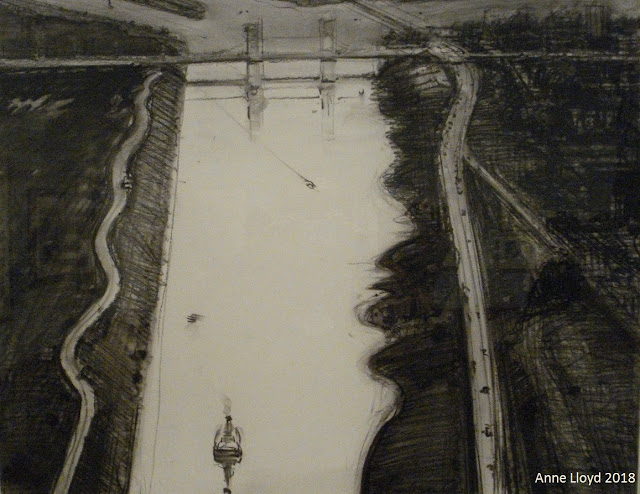 Both Rock Ridge and River Sides are realist works, yet are not the result of on-the-spot observation. They were (in Thiebaud's own words), "mostly just invented with perspective structures played around with to try and bring it into some sort of cohesive character."

In short, what you see on the gallery walls at the Morgan is Thiebaud's vision of America. Drawn from the mind's eye of this great American artist, from his life experience and his devotion to art, these are images of America's enduring appeal, of wide-open spaces and the "more abundant life."

Posted by Art Eyewitness at 5:17 PM