Baseball Americana at the Library of Congress 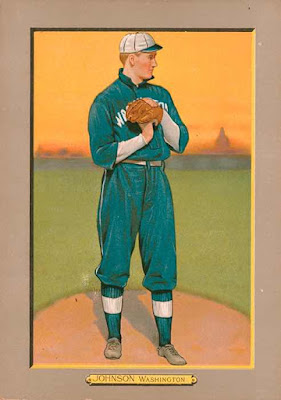 The Library of Congress


What would you pick as a great work of art? Vermeer's Girl with a Pearl Earring or Turner's Rain, Steam Speed? Rodin's Burgers of Calais?
How about Willie Mays' over-the-shoulder catch of the long fly ball hit by Vic Wertz in Game 1 of the 1954 World Series? Or would you prefer Joe DiMaggio's 56-game hitting streak during the summer of 1941?

Normally, great moments of sport and of art don't mix. This summer is an exception as the Library of Congress is mounting a hugely enjoyable exhibition entitled Baseball Americana. Coinciding with the 2018 All Star Game, which will be played in Washington D.C., the exhibit is an insightful look at a form of athletic competition that is indeed a form of art. 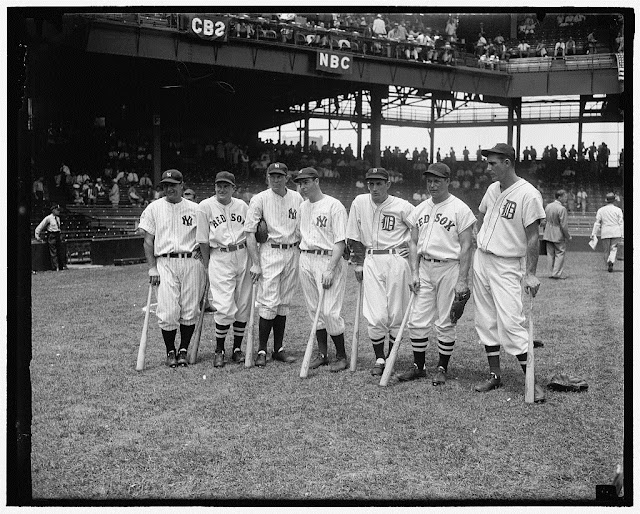 The Library of Congress has a vast trove of baseball-related documents, pictures, posters books and memorabilia. These include the two first edition copies, required by U.S. law to be deposited at the Library of Congress, of the lyrics and sheet music of Take Me Out to the Ballgame. 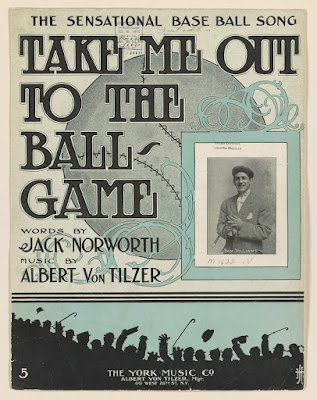 Sheet music cover of Take Me Out to the Ballgame, 1908

According to the exhibit text, ball and bat games can be traced back to the Middle Ages. There are some references to ball games in letters written by Revolutionary War soldiers. But the first definitive account of a baseball game occurs in a 1786 diary by a student at the College of New Jersey, later Princeton University.

John Rhea Smith enjoyed the March 22, 1786 game but he did not have much luck either fielding or hitting. In his diary, Smith wrote, "A fine day play baste ball in the campus but am beaten for I miss both catching and striking the Ball.” 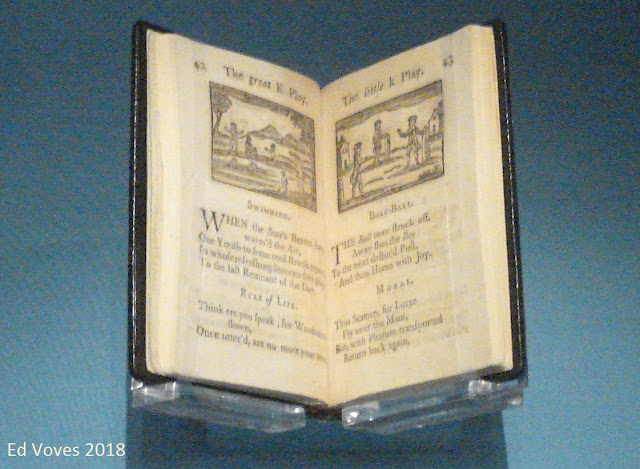 Ed Voves, (Photo 2018) A Little Pretty Pocket Book (1787)
The first illustration of a baseball game appears on the right-hand page.

A year after Smith's less-than-stellar "baste ball" game, a publisher in Worcester, Massachusetts, printed an illustrated children's book, A Little Pretty Pocket Book. Originally published in England, it shows the first-ever picture of a "Base-Ball” game. Wooden posts serve as the bases. Despite American mythology to the contrary, it is clear that baseball is English in its origins. That might seem "not quite cricket" but the evidence in the Library of Congress exhibit is fairly conclusive.

During the years of the early Republic, a number of forms (and spellings) of baseball were played. One set of rules stipulated that the game be played until the first team scored twenty-one runs. But as the United States split into two feuding camps, North and South, the "republic" of baseball witnessed the face-off of two major rivals, the Massachusetts Game and the New York Game. The Massachusetts version had a long pedigree but the New York Game eventually gained public favor.

The key date in the triumph of the New York Game was January 22, 1857. On that day, representatives of fourteen New York area teams met to create “Rules for Match Games of Base Ball.” 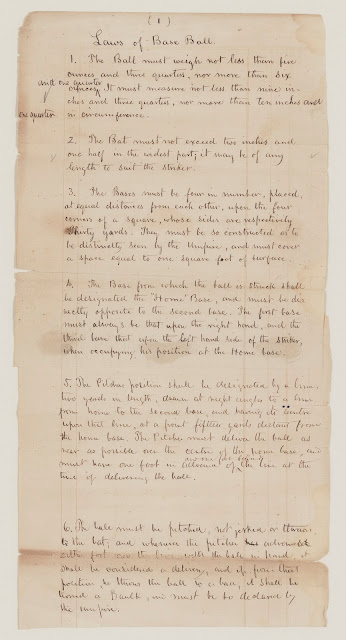 The captain of the Knickerbockers, Daniel Adams (1814-1900), submitted a succinct, forceful set of rules which was then debated. "Doc" Adams - he was a medical doctor - carried the day, since most of what he proposed was adopted.

Point #4 illustrates the clarity and practical genius which the good "Doc" brought to his set of proposed rules.

4. The Base from which the ball is struck shall be designated the "Home" Base, and must be directly opposite to the second base. The first base must always be that upon the right hand, and the third base upon the left hand of the striker, when occupying his position at the Home base.

What Adams proposed, the team representatives debated, pro and con. Their decisions have stood the test of time. Each game would be played for nine innings by teams of nine players. The team which scored the most "aces" (as runs were called in that era) by the end of the ninth inning would be the victor. It was also decided that the playing field would be diamond-shaped, with bases set 90 feet apart. 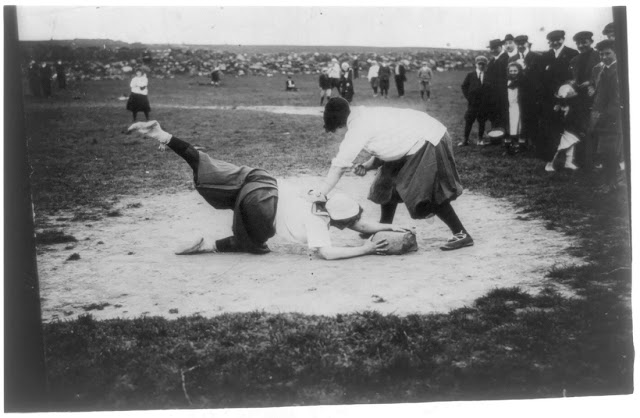 Miss Schnall sliding to first. Miss Morgan on bag, 1913
Vintage photo from the archives of the Library of Congress.

By the time the meeting of the New Yorkers concluded, the game of baseball as we know it had been created.

Another Knicks representative, William H. Grenelle, recorded the debate on pages of light blue stationary. This document, along with Adams's proposal, remained in Grenelle's possession. When he died in 1890, these pages covered in cursive penmanship were preserved by his family. The Grenelle family evidently was not aware of the enormous historical significance of the documents.

The New York 1857 rules are nothing less than the Magna Carta of Baseball.

When the New York 1857 rules were auctioned in April 2016, Hayden J. Trubitt, a corporate lawyer in San Diego, did grasp their importance. Trubitt took a mortgage on his house to buy the documents for $3.2 million. 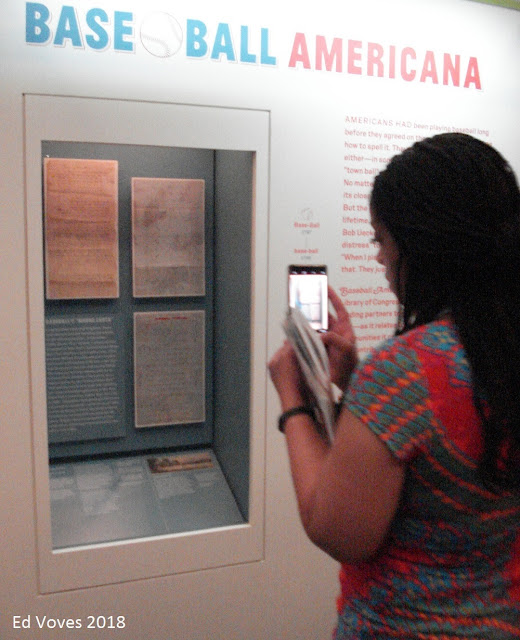 Mr. Trubitt graciously loaned his treasure to the Library of Congress where it anchors the Baseball Americana exhibition. These “Rules for Match Games of Base Ball” are so crucial that it would seem beside the point to emphasize their importance. Yet, there is so much to see and enjoy in this exhibit that is easy to pass-by these hand-written documents with hardly a notice.

As you might expect, there is a massed array of baseball gear on view: vintage fielder’s gloves that look like oven mitts, a “then and now” face-off of catchers’ masks and a pair of Babe Ruth’s shoes with cleats better suited to climbing Mount Everest than playing in the outfield of Yankee Stadium.

I was particularly impressed with a poster advertising an Independence Day Game back in 1879 between two Boston-area teams. Note that the archaic spelling, “Base Ball,” continued in use for a long time during the 1800’s. 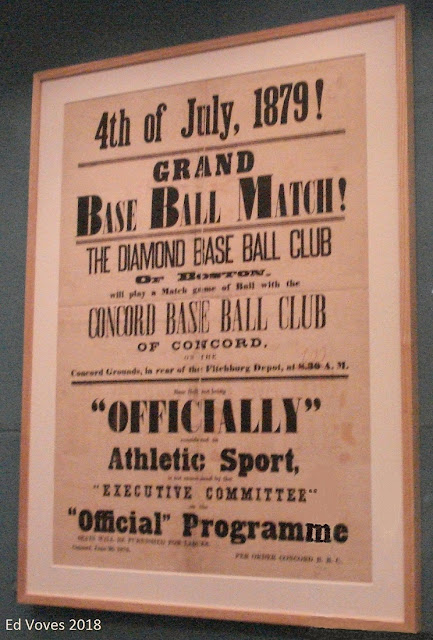 Note also the emphasis on the words “Official” and “Executive Committee.” Constant resort to authority was needed to prevent “Base Ball” players from backsliding to early versions of the game. It took a long time and plenty of umpires to suppress the temptation to throw-out a base-running “striker” by throwing the ball at him! 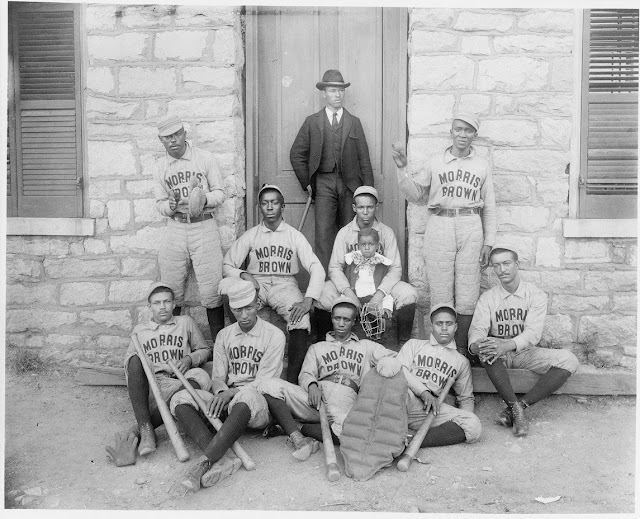 It took even longer for African-Americans to gain recognition for their playing ability. A compelling photo from 1900 of a baseball team from Morris Brown College in Georgia illustrates the pre-Jackie Robinson era of baseball history.

As a result of Jackie Robinson's epic 1947 success breaking the “color bar,” the door opened for other outstanding African American players to make their mark in baseball's Major Leagues. It was a poignant moment at the press preview to see the current Librarian of Congress, Carla Hayden, posing beneath a photo of her favorite player, Willie Mays. 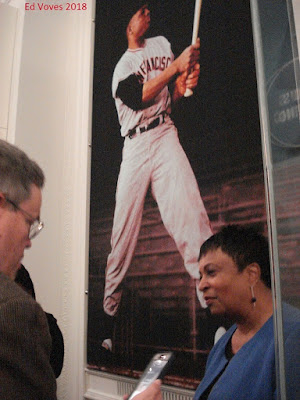 Carla Hayden is the first woman, as well as the first African American, to hold the post of Librarian of Congress. It is doubly significant, then, that the role of women in playing the game is highlighted in the Library of Congress.  Baseball-crazy women have never just cajoled boyfriends to "take me out to the ballgame" as Katie Casey did in the song. They want to get in on the action too. 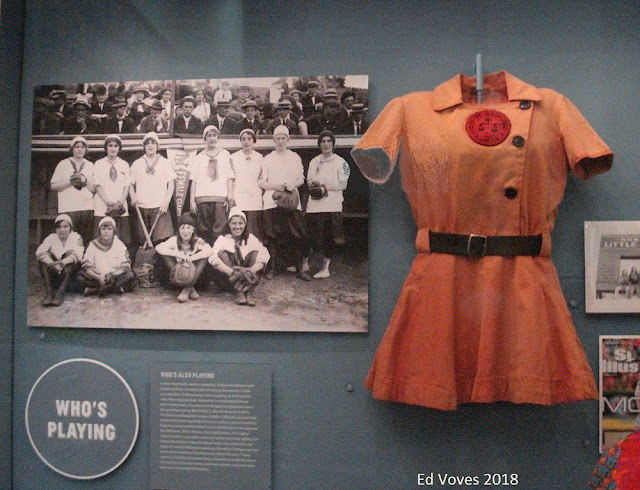 Ed Voves, Photo (2018) Display of women's baseball memorabilia.
The uniform of "Dottie" Keys of the Rockford Peaches is at right.

The curators of Baseball Americana have done an outstanding job covering both the wide-range of America's national pastime and focusing on key features of the game. Little League, sandlot teams, softball, El Béisbol, the great films about baseball like Pride of the Yankees, baseball "bloopers", an interactive exhibit designed by ESPN's Statistics and Information Group which enables visitors to check on significant batting and pitching achievements. Everything about "Our Game" is here.

My visit to Baseball Americana at the Library of Congress brought back many vivid baseball memories. Memories of the games I've watched, of trips to the Hall of Fame in Cooperstown, of "swingin' and missin'" at picnic games just as John Rhea Smith enjoyed "a fine day play baste ball" back in 1786. Most of all, Baseball Americana prepared my mind and heart for the special magic of the umpire's words:

Images courtesy of the Library of Congress, Washington D.C.

Manuscript of the  "Laws of Base Ball”, composed by Daniel “ Doc” Adams, December 1856. On loan to the Library of Congress, courtesy of Hayden Trubitt, San Diego, California .

Ed Voves, Photo (2018), Gallery view of the Baseball Americana exhibit, showing the draft manuscripts of “Laws of Base Ball” by Daniel “ Doc” Adams, December 1856, and William Grenelle’s “Rules for Match Games of Base Ball,” 1857. On loan to the Library of Congress, courtesy of Hayden Trubitt, San Diego, California .

Posted by Art Eyewitness at 5:33 PM