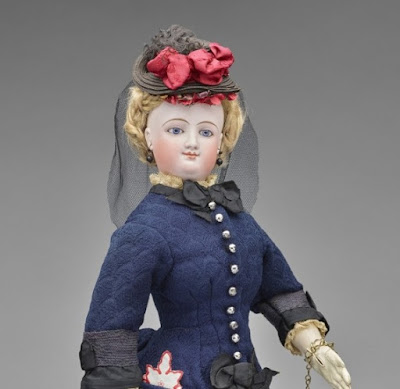 The March girls, Meg, Jo, Beth and Amy, are celebrating their 150th birthday this year.  That's a lot of candles to put on a cake. But a celebration of the "sesquicentennial" of the publication of Little Women, the much-loved novel by Louisa May Alcott, is definitely in order.

How to wish happy birthday to the heroines of Little Women, without triggering the fire alarm? A visit to the Philadelphia Museum of Art's exhibition, Little Ladies: Victorian Fashion Dolls and the Feminine Ideal, is just the ticket. 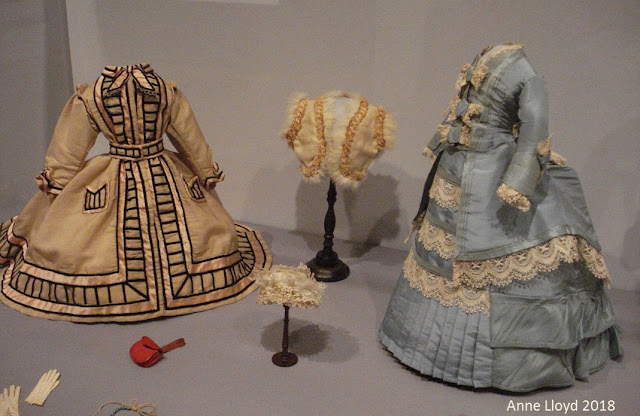 Little Ladies is based on what for decades was a hidden treasure of the Philadelphia Museum of Art. Three Victorian-era dolls and their wardrobes had been donated to the museum over the years and - incredibly - never displayed until the 1990's. The first collection had been bequeathed in memory of Mrs. Gardner H. Nicholas in 1922 before the present-day museum building was even completed.

For decade upon decade, these remarkable Victorian dolls and clothing languished in the storage vaults of the Philadelphia Museum of Art until an assistant curator of textiles and costume, Kristina Haugland rediscovered them in 1990.

Haugland organized a highly successful exhibit in 1991 entitled Perfect Little Ladies: the Art of Dress in the 1870s. Now Haughland is back with two major fashion-related exhibitions: Fabulous Fashion: From Dior's New Look to Now and Little Ladies: Victorian Fashion Dolls and the Feminine Ideal.

As the subtitle of the exhibit affirms, Victorian dolls were designed with an educational purpose in mind - one could define it as "social conditioning" - to guide young girls along the path to the womanhood as virtuous and stylish wives and mothers.

Before we examine these "Little Ladies" as role models, let's look at the dolls!

Approximately two feet tall, the dolls were often called Parisiennes, as most were made in France. The toy manufacturing firm, Bru of Paris, was the leader in doll-making during the Victorian heyday covered by the exhibition, from 1867 to 1885. 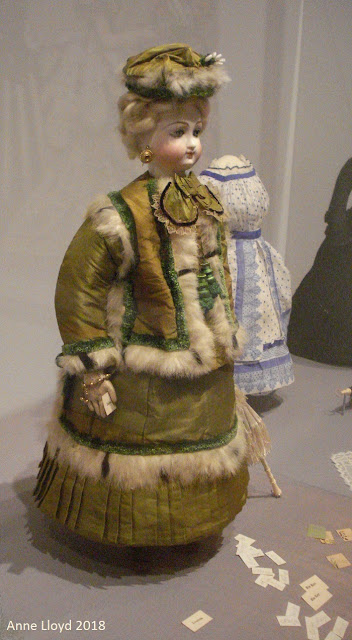 In an early example of product "branding," each of the dolls had a signature name: Miss Fanchon, Miss G. Townsend and Miss French Mary. Miss Fanchon, the most famous, strikes a rather matronly pose, clad in a fur-trimmed green and gold jacket and skirt, dating to the early 1870's. In her hand is a calling card, an absolute essential for every woman - and doll - to carry as she made the circuit of shopping and social visits.

The "Little Ladies" were made of leather bodies and bisque-fired ceramic heads. Bisque is the first firing in the ceramic process, which removes all water from the clay. For plates, tea cups and other dinnerware, a second firing is need to make a hardened, durable surface. By stopping at the bisque-firing stage, the surface has a skin-like feel to it, imparting a rather uncanny realism to the dolls. 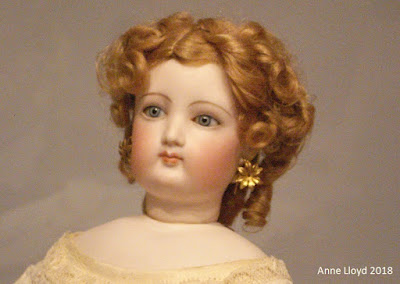 Anne Lloyd, Photo (2018) Detail of a Bisque-fired Ceramic Head of a Victorian Doll.

Bisque-fired ceramic dolls, however, were delicate in consequence of only one kiln-firing, another reason for encouraging lady-like decorum in the way they were handled. The dolls faces were painted to a light pallor with just a hint of rosy cheek, very much the desired skin tone of gentile ladies during the 1870's. No tanning salon for Miss Fanchon!

The greatest joy of dolls is, of course, dressing them up. For that, the Victorian girl lucky enough to own a Miss Fanchon doll had an incredible range of dresses, undergarments  and every conceivable accoutrement from which to select. 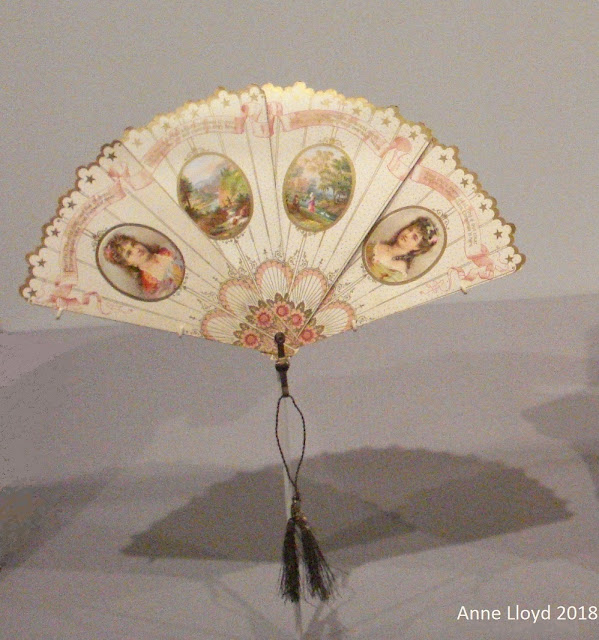 Every major type of garment from dressing gown to fancy ball dresses, from bridal attire to "widow's weeds" was made - and made with such artistry and painstaking skill that it is difficult to tell from a photo whether the dress is doll size or human scale. 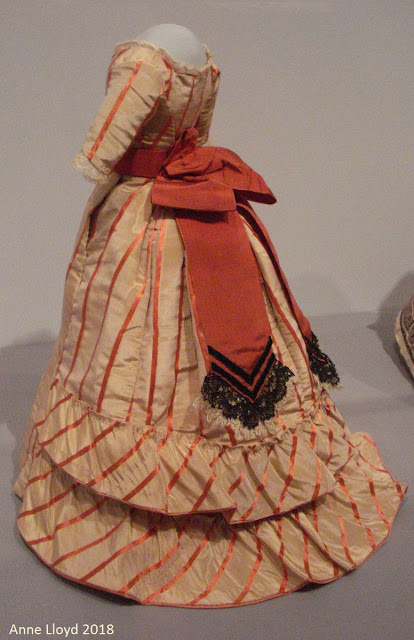 In a master stroke of planning, several full-size dresses are on display in the Philadelphia Museum  exhibit which permit detailed comparison with the apparel of the Little Ladies.

The human-size clothing includes a woman's day dress, made from striped silk satin and silk taffeta, dating to 1870, and a child's dress, made around 1867. Big or small, these dresses are masterpieces of Victorian-era couture. 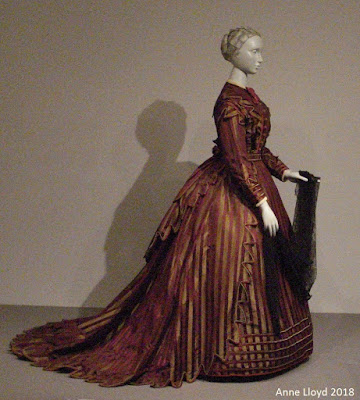 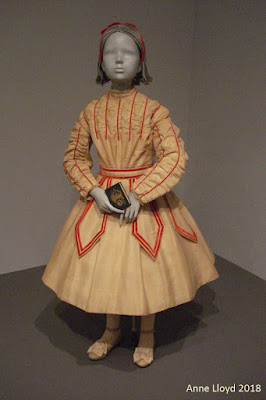 Lurking underneath the flowing silk skirts of both Victorian ladies and "little" ladies was the elaborate set of undergarments which are displayed in miniature in the exhibition. The ritual of covering the female body with layer upon layer of "unmentionables" beggars description. But we'll give it a try!

The first garment to go on was a knee-length chemise, covered by a pair of drawers. A  horsehair bustle provided padding for her "bottom". Over this went a hoop-skirt and petticoats. A bone corset was placed on her torso and laced-up tightly to insure that her waste-line met the proper feminine proportions. Cardboard dress shields were inserted under the lady's armpits to keep sweat from soiling the silk dress that somehow had to be placed over this mass of material. 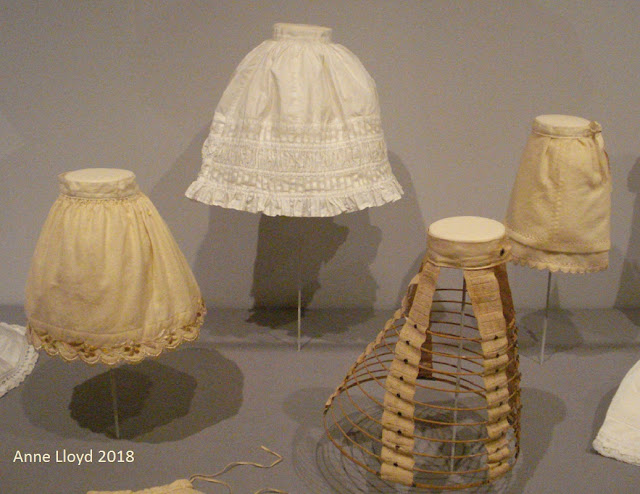 Anne Lloyd, Photo (2018)
Doll underwear in the "Foundations of Fashion" display at the Little Ladies exhibit.

I think it fair to say that not even a Japanese samurai of the 1500's ever had to face such a complicated and suffocating regimen in donning his armor as a young lady during the Victorian era had to deal with just to get dressed!

Th nineteenth century dolls and their garments (and undergarments) make the Little Ladies exhibition hugely enjoyable, as well as informative. Combined with the Dior to Now exhibit in the adjacent gallery, this Victorian fashion show will make a visit to the Philadelphia Museum of Art a real delight.

There are some sobering points to be considered while viewing the Little Ladies exhibition. As previously noted, one of the salient points of these dolls was to prepare young ladies for their role as wives and mothers. Just as the cost of a Harvard degree for the "son of the house" was an investment in the young man's future, so too were these dolls for his sisters as they were guided along their life path to marriage and motherhood. 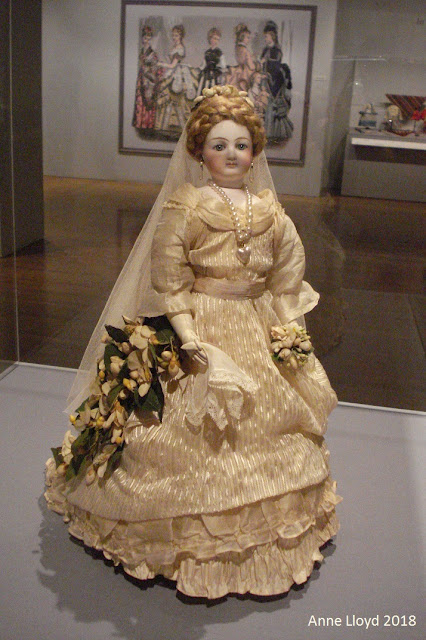 Miss Fanchon was as much an instructional tool as a toy and she didn't come cheap. Bisque-headed dolls were priced around $10 during the 1870's. A full ensemble of silk evening dresses, polonais walking suits, corsets and hoop-skirts, hair brushes and parasols might cost more than $300. That might not sound extravagant given the price of today's toys. Comparison with the wages and the cost of living during the mid-Victorian "mauve" decades is another matter.

A skilled worker in the United States, an iron molder, earned $3.06 per day in 1870. Unskilled laborers or factory workers were often paid half of that wage. Women and children's salaries were subject to further disparities. Teachers were paid abysmally, an average salary for a male teacher during the 1880's was $72 a year, woman teachers receiving a third less.

Food during the post-Civil War decades was plentiful and relatively inexpensive. This was also the "age of shoddy" and cheap factory products made it possible for the working class to "get-by" during periods of high employment. But quality items were often beyond the reach even of skilled workers. A pair of men's heavy-duty work boots cost $3.94 in 1872, more than a day's wage for an iron molder. 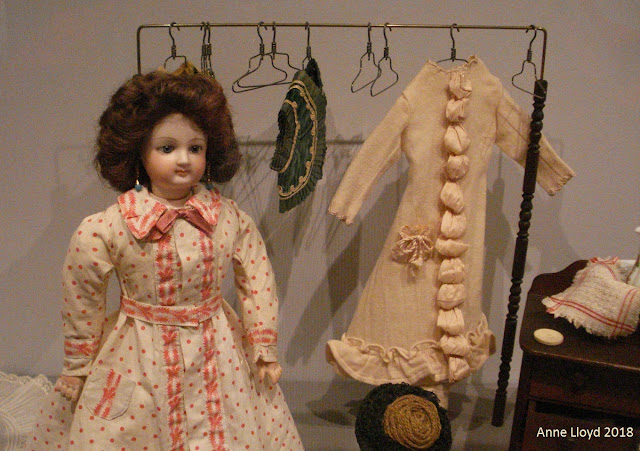 Such was the disparity between the the cost of high price fashion dolls like Miss Fanchon and the economics of sheer survival for many Americans during the post-Civil War era. However, a more positive interpretation can be drawn from of these comparisons.

If girls from "good families" were schooled in the code of "proper" womanhood by playing with dolls like Miss Fanchon, many went far beyond that accepted role later in life. Many young women, reared in comfort and plenty during the Gilded Age, displayed social consciences of the most enlightened kind. 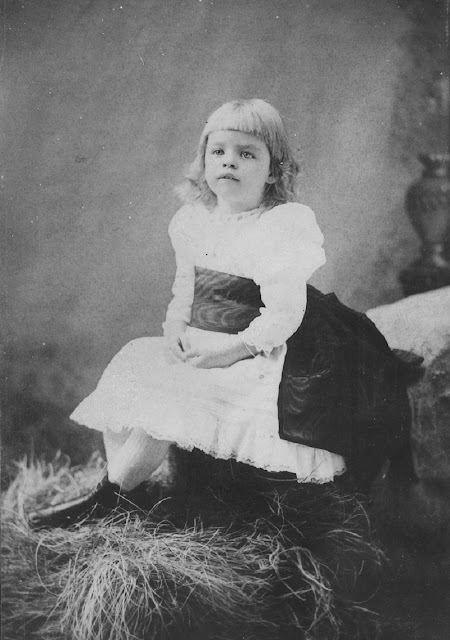 A short-distance from the site of the Little Ladies exhibition, one of the treasures of the Philadelphia Museum of Art is on view. It is the marble monument sculpted by August Saint-Gaudens in honor of Maria Gouverneur Mitchell.

The daughter of one of the most prestigious doctors of Philadelphia, S. Weir Mitchell, Maria Mitchell contracted diphtheria in 1898 and died, aged twenty-two. She taught in the school at Saint Stephen's Episcopal Church in Philadelphia. She is likely to have to have been exposed to diphtheria while teaching. Diphtheria was one of the deadliest infectious diseases among children during the Victorian era until a vaccine was introduced in the 1920's. 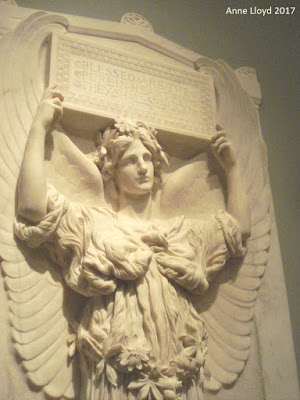 The Saint-Gaudens sculpture, commissioned by Maria's grieving parents, is entitled The Angel of Purity. It is on display at the entrance of the American galleries at the Philadelphia Museum of Art. For over a century, this moving work of art was placed near the family pew in Saint Stephen's. It is worth taking a few moments after enjoying the Little Ladies exhibition to pay a visit to Maria Mitchell's angel.

Maria Gouverneur Mitchell (1876-1898) would have played with dolls like Miss Fanchon or Miss French Mary and have read Little Women. But her moral education did not stop with role-playing and identifying with the protagonists of Little Women. A daughter of privilege, Maria Mitchell also learned the lesson that the social "niceties" include living according to the Golden Rule.

Anne Lloyd, Photo (2017)  Gallery view of the Little Ladies: Victorian Fashion Dolls and the Feminine Ideal exhibition at the Philadelphia Museum of Art.

Anne Lloyd, Photo (2018) Detail of a Bisque-fired Ceramic Head of a Victorian Doll.

Anne Lloyd, Photo (2018) Miniature Lady's Fan on view in the Little Ladies exhibition at the Philadelphia Museum of Art.

Anne Lloyd, Photo (2018) Doll underwear in the "Foundations of Fashion" display at the Little Ladies exhibit at the Philadelphia Museum of Art.