Art Eyewitness Book Review: The Face and Bestiary from the British Museum 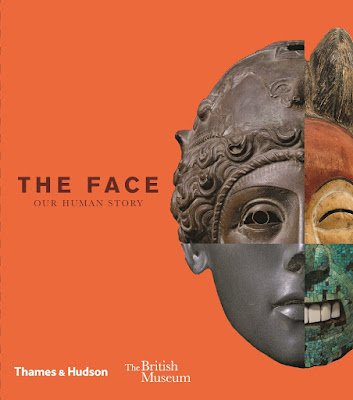 Bestiary: Animals in Art from the Ice Age to Our Age by Christopher Matthews
Thames & Hudson/256 pages/$24.95

"Sir, when a man is tired of London, he is tired of life," Dr. Samuel Johnson proclaimed  to his boon companion James Boswell, "for there is in London all that life can afford."

The date was September 20, 1777. Eighteen years before Boswell recorded this famous remark, one of the prime attractions of London had opened its doors, offering examples of "all that life can afford" to Londoners and visitors alike. The world's first public museum, it was located in the Bloomsbury section of London and was called the British Museum. The name was something of a misnomer in Johnson's day and for many years afterward since there was very little on display that pertained to the British Isles.

Today, the British Museum exhibits art and artifacts from every period of history and from every continent and almost every nation of the world. This mighty institution has joined with the publishing firm, Thames and Hudson, to produce two books highlighting its vast holdings. These handsome, insightful volumes are each based upon a key theme, the human portrait and the relationship of people with animals.

The Face: Our Human Story by Debra Mancoff and Bestiary: Animals in Art from the Ice Age to Our Age by Christopher Matthews complement each other splendidly. To an amazing degree, human beings have masked or garbed  themselves in animal-themed motifs. Furthermore, the experience of our fellow creatures in the animal kingdom has inspired and elevated the mind - and - especially - the emotions of  men and women since time immemorial. 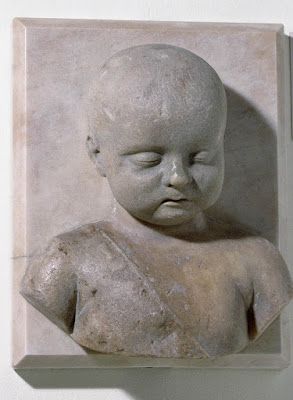 These two books are beautifully illustrated and have engaging, provocative texts. Mancoff's prose is almost poetic as she evokes the many moods of human life and the masks we wear to try and conceal our true selves:

Our faces function as a window to our thoughts and feelings and as a mirror of social attitudes and expectations; they connect our inner life to our outward experience... All these factors - meanings, identity, emotion and connection - have made the human face the most potent and persistent subject in the history of art.

Perhaps the human face is a little too potent. For that reason, humans have created masks or disguises to cover the "shocking" truth of our lives. 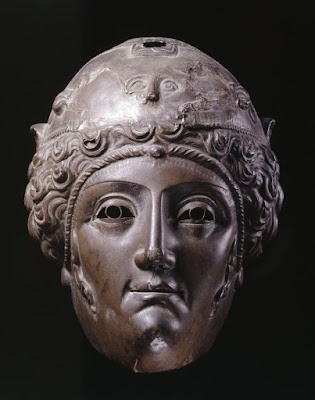 During the later Roman Empire, soldiers wore elaborate masks with the features of the gods of the Pantheon or Amazons (as in the above example). These masks were a feature of dress parades or dazzling displays of horsemanship rather than providing protection from enemy arrows. For the whole point was to maintain the fiction that the Celts, Germans or other "barbarians" serving in the legions were  real-live Romans, when in fact actual Romans were in ever-shorter supply.

One of the opening images of The Face is this striking, almost nightmarish, face from ancient Mexico, likely Xiuhtecuhtli of the Aztec culture, around 1500. 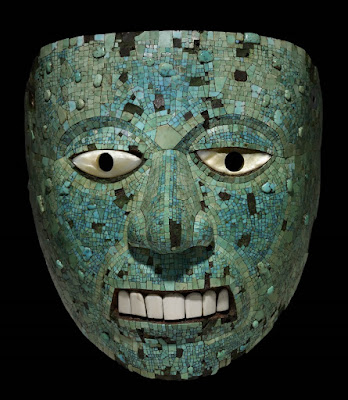 The "Turquoise Lord," Xiuhtecuhtli, is a somewhat shadowy figure in Mesoamerican myth. This frightening mask would have been worn by a temple priest in one of the many ceremonies invoking the help of the gods to nurture Aztec crops in the extremely weather-sensitive environment of Mexico.

Masks are not always intended to conceal or to overawe.  Sometimes a "change of face" denotes a major cultural or religious transition. 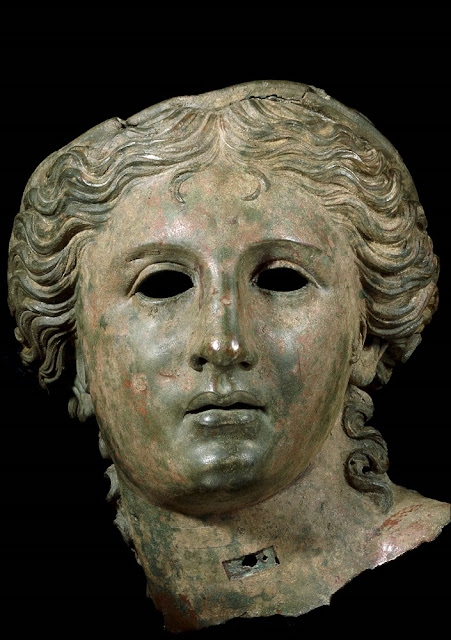 One of the most fascinating images in The Face is the seemingly conventional countenance of a Greek goddess. Its museum name is The Satala Aphrodite. But this is not Aphrodite or Artemis, either. Rather it is the Persian goddess Anahita, whose lineage can be traced back to the even more ancient divinity, Ishtar, of Babylon.

The features of Anahita were reworked with recognizably European features, making her more acceptable to new devotees as her cult moved westward, as so many "mystery" religions did under the Roman Empire. This remarkable work was  discovered in 1873 in modern-day Turkey in the cultural transfer zone (and often battle zone) on the border of the Roman and Persian empires.

However fascinating masks and "guises" are, the unconcealed human face always takes the prize. The many illustrations in The Face convey the incredible range of expressions, intentions and obsessions which are displayed on our face. Try as we might, we cannot wipe away our inner self from registering on our outward countenance.

Ironically, we are never so hard to "read" as when we throw pretense to the winds and just "be" ourselves.

Look at the remarkable portrait drawing of Isabella Brant by her husband, Peter Paul Rubens. Isabella Brant (1591-1626) was no conventional beauty by the standards of her age or ours. Her face in Ruben's sketch, however, is filled with vivacity, charm and self-awareness. What was she thinking about while her husband sketched away? 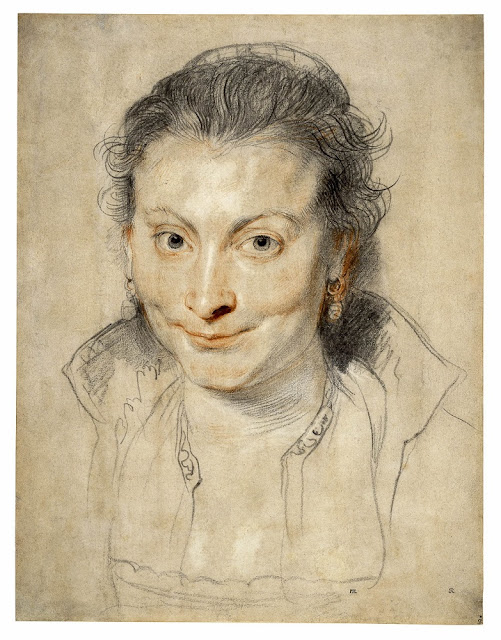 Perhaps this enigmatic woman was aware of how precious was the moment she and her artist-husband shared together. We will never know what interior dialog was playing out in her mind -and on her face. That is one of the charms of this magnificent rendering of the mystery of human  feeling.

What we do know about Isabella Brant is that she died four years after this sketch was completed. She was cut-down by bubonic plague, still a fearsome killer three hundred years after the Black Death. We can only hope that Rubens' love for his wife helped her find peace in her tragic final hour.

Human empathy is based on a sense of shared experience and the ties of kinship. We can better relate to other people because we a aware that they strive, struggle, suffer as we do. That is true of relationship of humans with animals.

Human beings identify with the inhabitants of the Animal Kingdom and have done so since time before time - before the cave art of Chauvet. 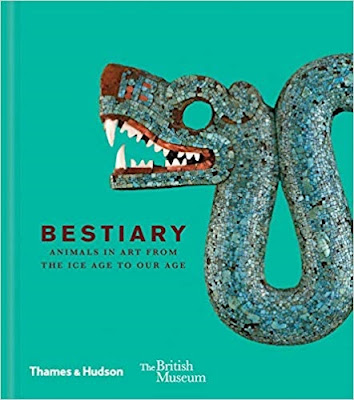 In Bestiary, we see one of the most compelling works in the collection of the British Museum.  A piece of Mammoth tusk has been inscribed with the depiction of two reindeer swimming across a river. It was created about 13,000 years ago and was discovered in France, the source of much of the surviving Ice Age art.

As the caption text surmises, this incredible art work was likely created to record an incident of a hunt, the memory of which could be invoked to help promote a sense of "mastery over the creature through its representation."

Yet, if you look closely at the features of the reindeer you cannot but feel the artist's appreciation of the life force, the animating "animal" power, of these beasts as they struggle against the current of the river and of the forces of existence.

After all, the daily experience of Ice Age tribesmen, wandering the bleak earth in search of food, was little different from that of the animals they hunted.

Closer in time and to the spirit of modern society is the golden panel screen painted by Maruyama Ōkyo (1733-1795). One of the greatest painters of traditional Japan, Ōkyo was well aware of Western techniques and incorporated them into time-honored genres like Kano painting. His Tigers Swimming a River, painted around 1781, reveals a modern sensibility as these fearsome predators show the characteristics of house cats.

Ōkyo, unlike the unknown carver of the swimming reindeer, never saw a living tiger. Japanese samurai, however, had hunted tigers during the bloody war in Korea during the 1590's and the big cats continued to fascinate the Japanese long after the war.

Tiger skins remained a much sought-after item in Japan. But a preserved tiger pelt has a flattened head and this is how Ōkyo painted his swimming felines as they ford the golden river. Given the mystical setting of the tigers' journey, this hardly seems a defect.

As the emotional distance increases between animals in the wild and people living in cities, the greater is the compulsion to project human attributes upon animals. The Victorian artist, Alfred Crowquill (in real life Alfred Henry Forester), was a master of caricature, using animals, "dressed to the nines," to poke fun at people with their lengthy list of social distinctions. 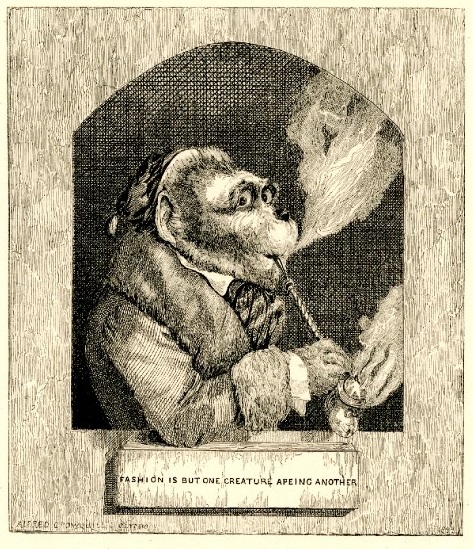 Alfred Crowquill, A Monkey Dressed as a Man,1844

"Fashion is but One Creature Apeing Another" Crowquill affirmed in this hilarious send-up of the nineteenth century British gentleman. However, animals are different from humans. They do not smoke pipes or play board games. Christopher Matthews, in the text of Bestiary, wisely notes that animals "in the flesh would bite, scratch or simply bolt."

With animals proving so illusive, so impossible to ever fully-understand, humans have created whole categories of hybrid beasts. These weird, wonderful creatures represent the "wild side" of nature, but with a human attribute that we can focus upon in order to tell "our" story in myth and legend. The final chapter of Bestiary brilliantly surveys this  "zoology of the imagination," from  the Sphinx of Egypt to the dragons of China to the Sea-Spirit figure from the Solomon Islands of the South Pacific. 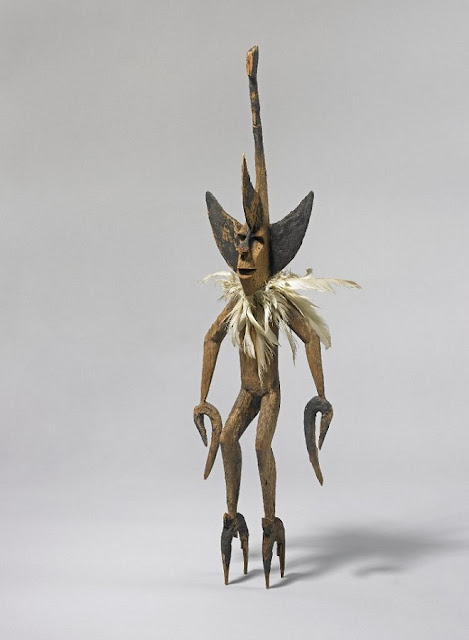 Perhaps the greatest insight of these two wonderful British Museum books relates to the extraordinary explosion of fantasy literature in modern society. The human genome is being decoded and the Hubble Space Telescope is sending back images of Deep Space  - but we keep looking.  As fast as science provides answers, human beings discover new, uncharted realms in themselves and in the world around them.

The more we "know", the more there is to explore. And that is a very good thing.

Cover of Bestiary: Animals in Art from the Ice Age to Our Age by Christopher Matthews (Thames & Hudson, 2018)

Posted by Art Eyewitness at 8:50 PM