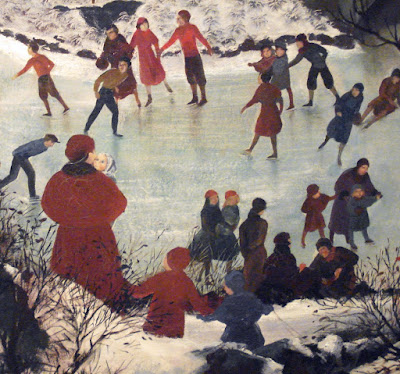 Far be it for me to contradict the eminent Victorian aesthete, but I think that a better quote would be “Life anticipates art.”

A creative person never knows when, where or how he or she will be inspired. But life happens. Every day, all the time.
Art is ready to respond to life’s stimuli, often before the artist is aware of what is happening or what will be the result.

Earlier this month, I made a trip to New York City for the preview of a new exhibition at the Metropolitan Museum of Art. The month of March held to its usual unpredictable nature. The weather report suddenly turned very bleak with yet another winter storm warning, trains cancelled, TV meteorologists commenting at length on the foreboding computer simulations. 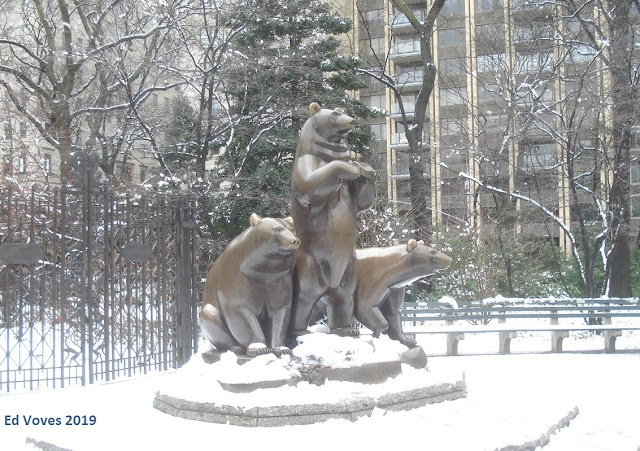 Paul Manship's Group of Bears, cast in 1960,looked far more alarmed at the weather report than they needed to be. These Art Deco bears, whose "lair" is located in a playground on the 79th Street side of the Metropolitan Museum of Art, were inspired by the bears which Manship created in 1934 for the bronze gates of the Bronx Zoo.

New York's snowfall for the March 4th storm, according to the newspapers, measured five inches in Central Park. It looked a lot less to me when I reached the Metropolitan Museum after a blissfully easy commute. By my reckoning the snowfall total was just enough to close school and make for a great sledding day.

I had time to spare for a jaunt in Central Park and my calculation was proven correct. The Park was indeed a Winter Wonderland. 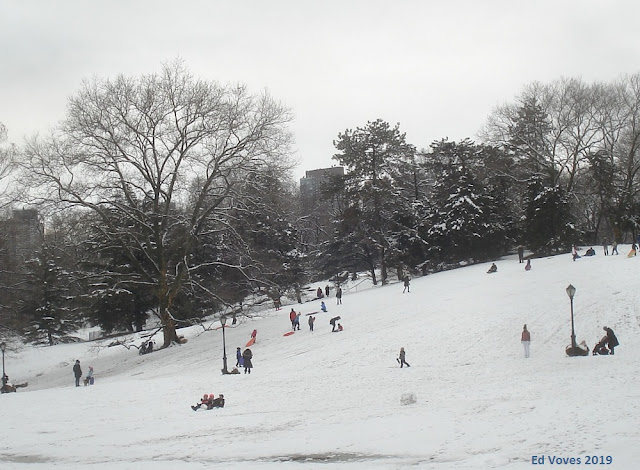 As I watched the kids (and parents) sledding down Cedar Hill, I was reminded of a painting which I saw at the Smithsonian American Art Museum last autumn when I visited there for the Bill Traylor exhibition. A landscape painting by Agnes Tait caught my eye. It was created in a folk art style which we now associate with Anna Mary "Grandma" Moses (1860-1961). Tait painted Skating in Central Park in 1934. Grandma Moses began painting in 1935 after arthritis forced her to give up embroidery. Clearly, there was no influence - either way - between Agnes Tait and Grandma Moses.

Life anticipates art, as I wrote. The New York City-born Tait (1894-1981) reached back to her childhood, just as Grandma Moses drew from the well of memory. Enduring art was the result in both cases. 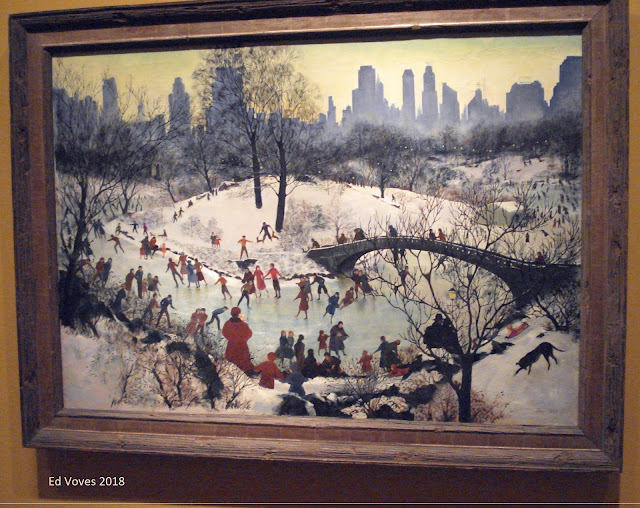 Agnes Tait studied art at the National Academy of Design in the years before World War I and then joined the exodus of American artists to Paris during the 1920's. When she returned, the Great Depression had struck. Very much a working artist, Tait could not afford to paint for "pleasure" until she was employed by the New Deal's Public Works of Art Project. Once her financial woes were addressed, Tait started to paint this wonderful scene of the "Big Apple" in wintertime.

I was struck by a number of features of this joyous work of art. However, it was only later, after thinking about the bridges in Central Park that I started wondering about Tait's frame of mind while she was painting Skating in Central Park.

The bridge depicted in Tait's painting resembles the Bow Bridge over Central Park's Lake, close to Fifth Ave. and 72nd street. The Bow Bridge has a stone balustrade similar to Tait's version. Yet, there are enough differences in the design of the Bow Bridge to rule out that theory.  A closer fit would be the Gapstow Bridge, built in 1896, on the Pond, near to Fifth Ave. and 62nd Street. But the volume of this stone edifice is much greater than the slender, arching form of Tait's bridge. 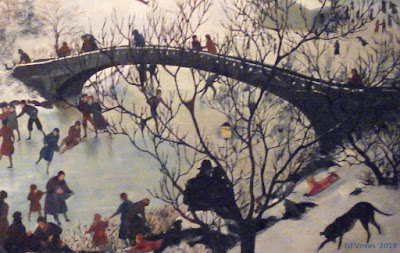 I'm not a native New Yorker and perhaps there's another bridge in Central Park that I've missed. But I think that Tait constructed this one in her mind's eye and that this fantasy structure served as a bridge from happy recollections of her childhood to the careworn, cash-short 1930's of her present. This is a bridge of memory. 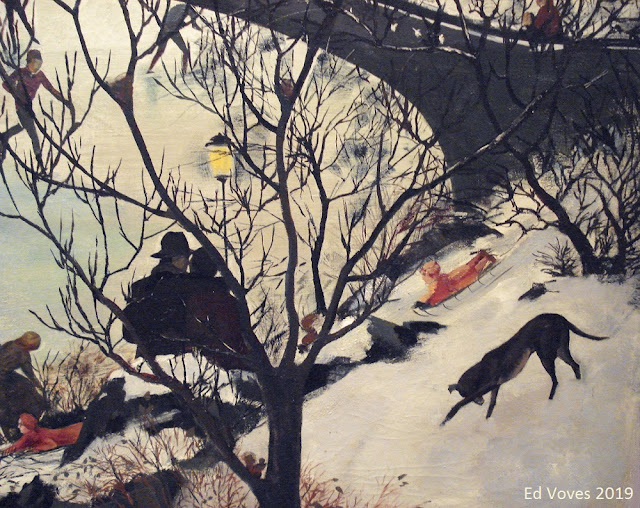 Ed Voves, Photo (2018) Detail of Agnes Tait 's Skating in Central Park, 1934
At the risk of indulging in "pop" psychology, I wonder if any of the New York City kids sledding down Cedar Hill will be moved by memories of their fun-filled day in the snow. There was such carefree joy to be seen in Central Park that March morning! It is the kind of memory that links the years from my childhood to now. A precious memory. 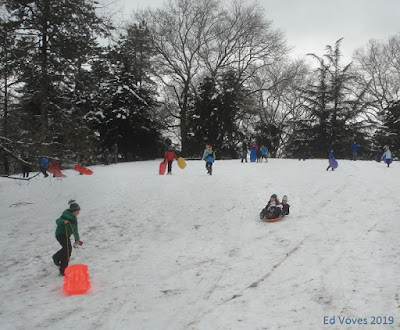 From what I can gather, Agnes Tait had a mystical side to her personality. She had visited Haiti on the way back from Europe to the United States. In 1941, she and her husband settled in Santa Fe, New Mexico. She left behind her this "remembrance of things past" to act as a talisman for us to hearken back to our respective pasts.

I was particularly struck by the way that Tait handled the winter mists, rising above the trees of Central Park. The day is passing. The park lights are coming on. Soon the looming apartments and office buildings will be obscured by the darkness of night, with only glowing windows to mark their presence. 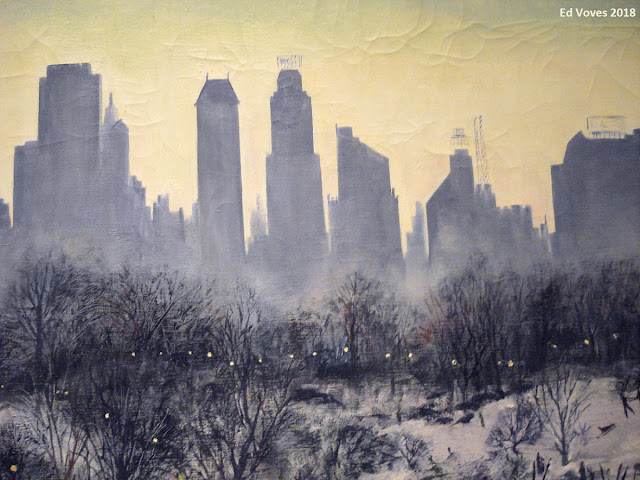 All this, Agnes Tait painted during a winter, seventy-five years ago, when the only thing that the American people had to fear was "fear itself."

Or was it just yesterday?

Great works of art "bridge" the gulf of years and centuries. Tait's joyous Skating in Central Park brings to mind the scenes of people skating and playing ice hockey off in the distance of Pieter Bruegel's, Hunters in the Snow, 1565.

Recently, I wrote about Bruegel's unforgettable masterpiece, commenting on the implications of the weary, bone-chilled hunters trudging home after killing a predatory fox. The village people could enjoy some winter sports because of the dedication and hard work of the hunters and the woman bowed-down beneath a huge bundle of kindling.

The same is true today. The kids sledding in Central Park, the visiting art lover snapping pictures of the happy scene are able to do so thanks to the diligent workers of the New York City Department of Streets, the cab drivers, the traffic cops.

Joy in life is precious, but never entirely spontaneous. So too in art! Life anticipates art not only by a moment of inspiration but through "perspiration" too, the toil and devotion to duty of others.

Gather ye rosebuds while ye may! But don't forget to say thank you for the "simple" joys of life.

Posted by Art Eyewitness at 4:56 AM