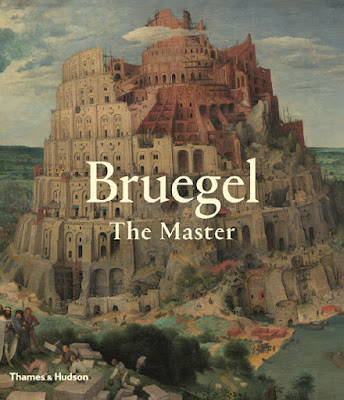 Pieter Bruegel the Elder was a painter for "all seasons."  In the case of his six-part depiction of the changing cycle of the year, Bruegel created one of the great glories of Western art.  Five of these oil on panel paintings survive and were shown together in a magnificent exhibition at the Kunsthistorisches Museum, Vienna - just concluded.

This was truly a once-in-a lifetime exhibition, held four hundred fifty years after Bruegel's death. Less than fifty of his paintings are known to exist today. Bruegel painted on oak panel, a seemingly durable format, yet the ravages of time have proven stronger.  Consequently, the rarity of Bruegel's oil paintings makes loaning them an especially hazardous undertaking.

The  Kunsthistorisches Museum has twelve of the Flemish master's paintings in its collection, making it the natural site for an exhibit of Bruegel's work. 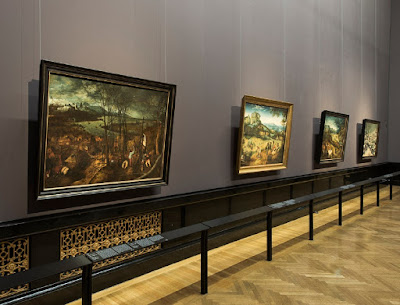 Gallery view of the 2018-19 Bruegel exhibit at the Kunsthistoriches Museum, Vienna

The rest of Bruegel's masterpieces are scattered in European collections, save for three in the U.S. The Metropolitan Museum of Art's golden-hued Harvesters did not make the journey to Vienna. The Parable of the Sower, likewise, stayed home at the Timkin Museum in San Diego, California.

There is no substitute to seeing art work in the original, even with significant omissions in a special exhibition.  And the Kunsthistorisches exhibit was indeed a mighty endeavor, with forty of Bruegel's oil paintings, sixty drawings and eighty prints - the greatest number ever assembled.

As an added bonus, the Kunsthistorisches Museum curators displayed period artifacts seen in the paintings. In the photo below, we see a pair of dice, a trencher plate (made from crusty bread which was eaten after it was soaked with sauce from the meal) and a slotted spoon used in cooking fish and mussels during Lent. All appear in The Fight Between Carnival and Lent. Beyond is a wall-size reproduction of Carnival and Lent, providing an IMAX-like viewing experience of this fabled work of art. 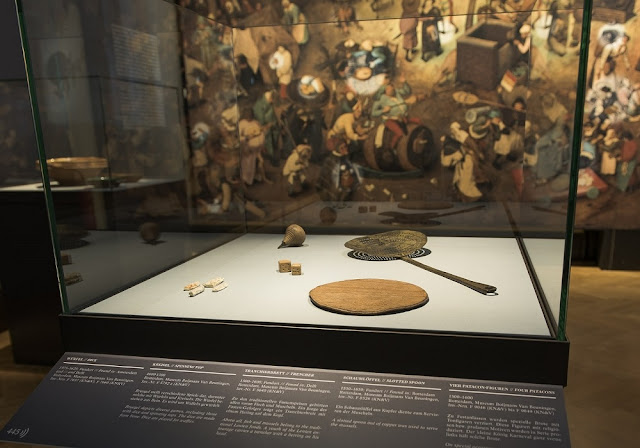 Gallery view of the Bruegel exhibit at the Kunsthistoriches Museum, showing
artifacts appearing in The Fight Between Carnival and Lent

What a show! But if - like me - you were not one of the fortunate art lovers able to journey to  Vienna, take heart. Thames and Hudson has just published a superb companion book to the exhibition.

Bruegel the Master is extraordinary in the quality of its text and illustrations. The fidelity of the large-format color reproductions to Bruegel's actual paintings is outstanding even by today's high standards. This Thames and Hudson volume ranks with The Prado Masterpieces as one of the outstanding art publishing ventures of recent years.

In some ways, close study of Bruegel's oil paintings and works on paper in a book like this is the best way to comprehend his images. This may sound like putting a brave face on missing the exhibition. However, the level of detail in Bruegel's work is so staggering that information "overload" quickly sets in, even when viewing a relatively uncluttered painting like the Met's Harvesters.

Bruegel was a storyteller of the first rank. He was also moralizer of almost prophetic stature. Bruegel's wondrous paintings are filled with incident and symbolism. It is virtually impossible, in one viewing, to fully comprehend the narrative sequence and allegorical sub-plot of one of his works, much less a gallery full of them. 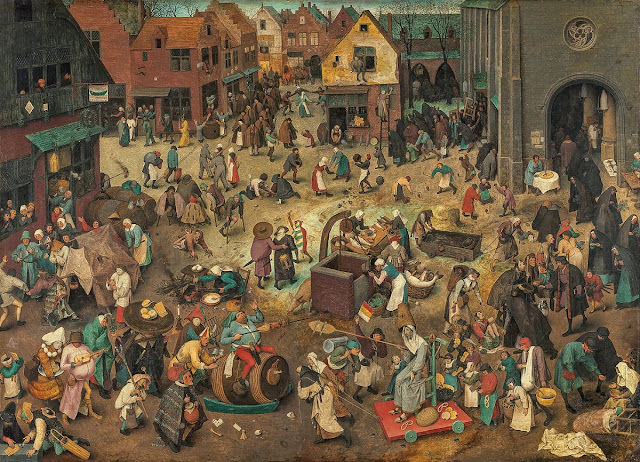 Pieter Bruegel the Elder, The Fight between Carnival and Lent, 1559

The Fight Between Carnival and Lent provides a particularly incisive look into Bruegel's enigmatic views on life and art. This incredible painting also underscores the rivalry of obvious versus hidden meaning which we find in almost every work by Bruegel.

Bruegel shows sensual delight in all its myriad forms on a collision course with religious devotion. From the left, revelers push a beer or wine cask, surmounted by Carnival, the Lord of Misrule, who brandishes a scepter on which cuts of meat and a boar's head are skewered. From the right, Lady Lent, with two scrawny fish on a baker's oven paddle, is followed by well-behaved children eating waffles and pious, soberly clad adults giving alms to the poor.

Everywhere we look on this crowed canvas are characters given over to folly or those trying to keep their feet on the "straight and narrow." But the key to this dizzying scene is smack in the center of the painting. 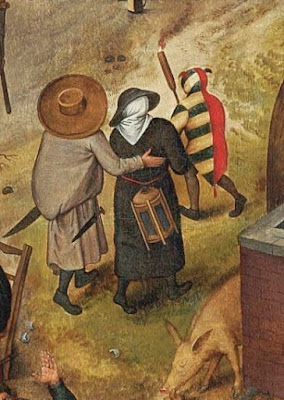 Pieter Bruegel the Elder, The Fight Between Carnival and Lent, 1559 (Detail)

Here we see a couple, man and wife, with a "fool" or jester walking before them. Everyday folks, John and Jane Doe, they represent the viewer, you and me. The woman carries an unlit lamp, signifying ignorance. The man has a strange bulge under his woolen gown. This is believed to represent the "baggage" of self, what we would call ego today. Will they (we) follow the jester and join in the merry-making. Or will they cast away their baggage, light the lamp and follow the path to the church at right.

Bruegel does not provide an answer. That is for us to decide. Indeed, the ultimate message or moral of most of Bruegel's paintings is placed before the viewer, awaiting his or her judgement.

If Bruegel was a one of the great creators of visual narrative, he was also a supreme master of irony. Nothing is exactly what it seems on the surface of his great works. In Hunters in the Snow, what appears to be a reassuring Winter homecoming scene packs a different, unsettling conclusion. The hunters have returned, safe on a snowy afternoon. In the distance, their friends and family enjoy ice skating or play "kolf," an early form of ice hockey. 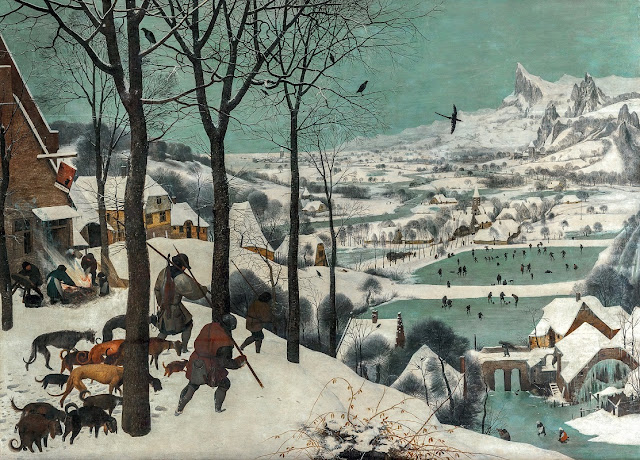 Pieter Bruegel the Elder, Hunters in the Snow, 1565

Look, however, at what the hunters have brought back - a dead fox. If that's the hunters' contribution to dinner, then there are going to be a lot of hungry townsfolk this evening!

No self-respecting hunter would bother to bring a single fox carcass for the  stew pot, especially with a pack of hungry dogs. The fox carcass is a trophy, the "scalp" of a dead predator who will no longer raid the chicken coop.

Hunters in the Snow depicts a world of unremitting toil where playtime is only possible off in the distance. The survival of the townsfolk depends upon the hunters' dedication. The woman bowed beneath on enormous bundle of kindling on the bridge in the lower, right-hand corner of the painting, plays her unsung role. And so too, do the toiling peasants, at left, who are preparing to slaughter a pig and then scald the bristles from the carcass.

All of this work is done in the bone-chilling cold of the Little Ice Age. Bruegel and the protagonists of Hunters in the Snow may not have been aware of the climate shift between 1300 to 1700 which significantly lowered the temperature in Europe. But no painter in all of history ever depicted the effect of winter weather on human beings more acutely than Bruegel.

Bruegel's life was tragically short life (1530?-1569). He made but one trip from his native Antwerp, a lengthy excursion to Italy, 1552 to 1554. But that trip was decisive, shaping  his vision of the world. The arduous journey and sojourn in Italy appeared and reappeared in the subject matter of his paintings. The memory of traversing the Gotthard Pass as he traveled home surely is reflected in his The Conversion of Saul, painted in 1567. 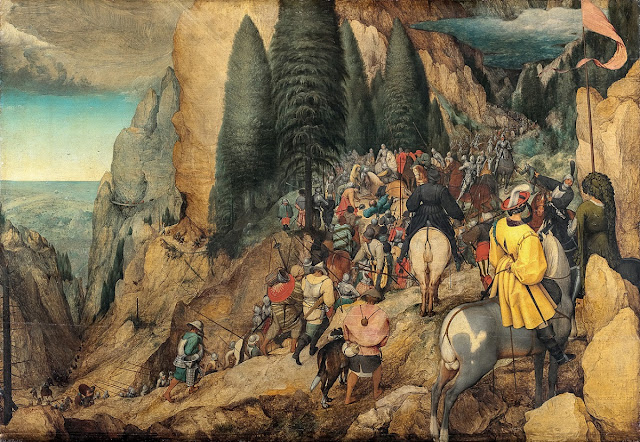 Pieter Bruegel the Elder, The Conversion of Saul, 1567


The vertigo-inducing look at the stragglers climbing up the mountain path leads us to the sight of the sprawling, blue-clad figure of Saul (soon to be the Apostle Paul). Surrounded by a concerned group of fellow travelers, Saul has been thrown from the saddle of his horse by a vision from God. One of the most influential figures in world history, Saul/Paul looks like he just fell from a bar stool.

We behold this pivotal scene like the two cavaliers, one in black, the other in a golden riding tunic. These riders are observing a moment in time when the earth shifts its axis, although they - and we - would hardly guess it from the misadventure taking place in the mountain pass.

Bruegel, a savvy observer of human nature, was equally well-versed in ancient culture and the scientific study of the world about in him. In their commentary in Bruegel the Master, Sabine Penot and Elke Oberthaler write:

Bruegel thinks and acts as a painter in the humanist milieu. He inscribes his main work within a tradition of artistic engagement with the annual cycle that reaches back to antiquity. He consciously confronts the legacy of natural depiction, already considered to be the ultimate standard by ancient authors. Bruegel takes a stand compositionally and technically by starting from, yet surpassing,the landscape tradition,which was especially rich in the Netherlands.

Bruegel's work was highly esteemed during his lifetime. The Hapsburg Dynasty favored his paintings and bought liberally. This is why there are so many of his paintings now in the collection of the Kunsthistorisches Museum,Vienna's greatest art museum.

Life, however, was to play an ironical prank on Bruegel. Very little documentation of his life survives, leaving a lot of gaps in his life story. However, the Dutch artist and writer, Karel van Mander (1548-1606), wrote about Bruegel in his study of Northern European art called the Schilderboek, published in 1604. Without van Mander's biography of Bruegel, we would know little about him.

Karel van Mander's analysis of Bruegel's work emphasized the earthy humor and wry appraisal of humanity in many of his paintings. He also commented on Bruegel's apocalyptic paintings like The Triump of Death, filled with "weird scenes and drolleries."

All of this was true, but van Mander's study of Bruegel left the impression that the Flemish master was something of a joker. Van Mander wrote:

Indeed, there are very few works from his hand that the beholder can look at seriously, without laughing. However stiff, serious, and morose, one may be, one cannot help laughing, or smiling. 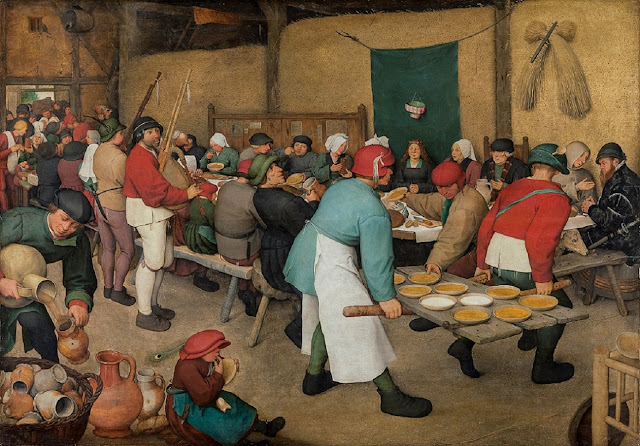 If we look at one of Bruegel's most famous paintings, we can see how van Mander reached that conclusion. We can also grasp how wide of the mark was this estimate.
Bruegel's The Peasant Wedding, 1567, is a joyous celebration life. We may smile at the over-sized beret on the child licking a bowl. Likewise, the look of anticipation on the bagpiper's face is priceless, as a tray of bowls of rijstpap or pudding, is brought in for the wedding guests to enjoy.

Yet, when we look at the serene contentment on the bride's face, we don't feel like laughing. Sitting in front of the green cloth of honor, she is queen for this day, her day. There is food and drink aplenty on this happy occasion. Wars and rumors of wars, of the kind depicted in The Triumph of Death, will not cast a shadow on this wedding feast.

Bruegel's The Peasant Wedding is a hymn to love and life. I wish I could have seen this wonderful painting at the Kunsthistorisches Museum exhibition. But such a transcendent work of art like this needs to be savored. It calls for our eyes to look at this painting - and Bruegel's other masterpieces - again and again, absorbing its message of humanity and hope.

Gallery view of the Bruegel exhibition, showing artifacts and utensils depicted in The Fight Between Carnival and Lent, 1559. Photo courtesy of the Kunsthistorisches Museum, Vienna, Austria.

Pieter Bruegel the Elder, Detail of The Fight Between Carnival and Lent, 1559. Courtesy of Kunsthistorisches Museum, Vienna, Austria.