A Nation Reflected: Stories in American Glass at the Yale University Art Gallery 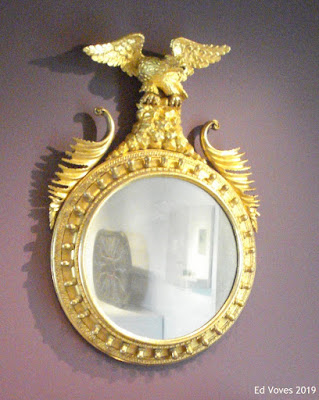 It was Benjamin Franklin, along with a lesser-known patriot named Christopher Gadsden, who proposed the rattlesnake as a symbol of defiance during the years of crisis leading up to the American Revolution. The now familiar “Don’t Tread on Me” snake certainly made for a powerful emblem of resistance. The British "milords", safe and sound in their Whitehall offices, failed to get the message.

The British also missed the point of a small green-tinted glass vessel made around the same time. This slightly tipsy-looking cream pitcher, perched on cabriole legs and paw feet, hardly looks like a fit companion to the pewter ale mugs of the Sons of Liberty. Yet, in its way, the diminutive glass pitcher was a direct challenge to the British Empire. 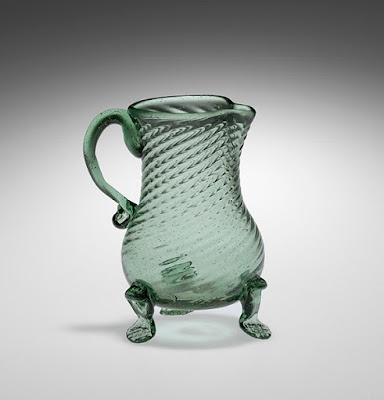 Henry William Steigel, a German-born artisan of genius, gets the credit for this remarkable object. Steigel (1729-1785) established the American Flint Glass Manufactory in Manheim, Pennsylvania, in 1769. Steigel did so in defiance of the notorious Townsend Duties, passed by Parliament in 1767 to tax manufactured goods imported into the American colonies – even when most of these were purchased from Britain. By making their own glassware - and iron tools and weapons - Americans like Steigel declared their independence from Great Britain years before 1776.

This jaunty pitcher, made from mold-blown potash-lime glass, was on view in a fabulous exhibition at the Yale University Art Gallery. A Nation Reflected: Stories in American Glass closed on September 29, 2019.

If you were not able to visit New Haven, CT, in time to see  A Nation Reflected, don’t despair. Yale University has published a catalog of the exhibition which, even by the very high standards of art books today, is beautiful to behold. 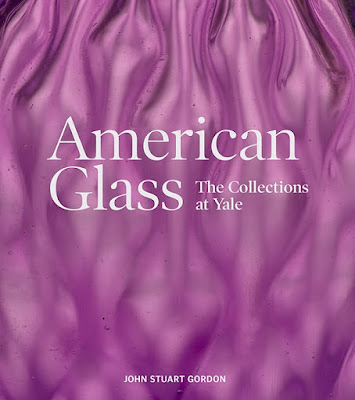 With large format photos of exceptional clarity. American Glass, The Collections at Yale, also features an authoritative text. Written by John Stuart Gordon, this is an absolutely authoritative and compelling book. It will be consulted time and again, whenever art lovers wish to learn more about glass making's role in American history and art.

Such praise, however, raises an important question. How significant are glass cream pitchers, compote bowls or whiskey flasks in the great drama of U.S. history? Is glass making a "sidebar" to the big story of the rise of American painting from Benjamin West to Andy Warhol? 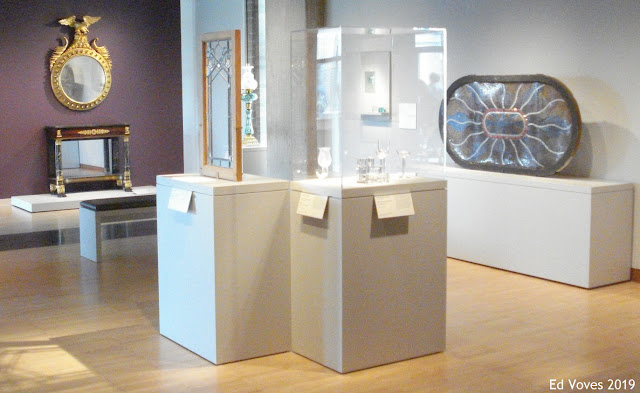 A Nation Reflected was on my exhibition radar for a long time. I was determined to get to the Yale University Art Gallery - however late in the day - to answer these questions. As I surveyed the splendid display, It was not long before I realized that the incredible glass pieces on view were testaments to the rich human experience underpinning America's experiment in art, science and democracy. 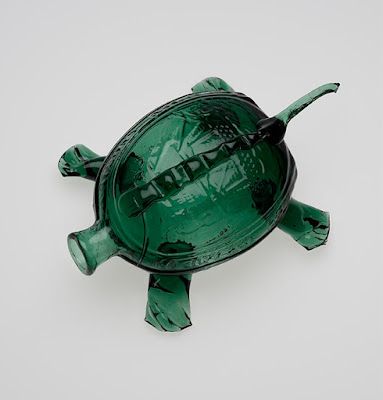 The story of culture in the U.S.A. cannot ignore folk art, which is as important as forms of higher wisdom and creativity. Much of the originality and innovation of America emerges from the "hardscrabble" reality of the nation's working  - rather than leisured - class. The same is true of humor as can be seen in this zany, turtle-shaped flask.

This singular piece is known as the "Sailors Rights Flask" in reference to the outrage over the conscription of U.S. sailors by the British Navy. This high-handed policy helped trigger the War of 1812. What this turtle-design has to do with seamen's welfare is anyone's guess. The fact that it was made in Philadelphia over a decade after the war ended in 1815, suggests that there is no connection at all. The most likely explanation is that a craftsman at the Kensington Glass Works looked at a common flask design, realized that it was shaped like a turtle and then added legs, tail and dorsal ridge. 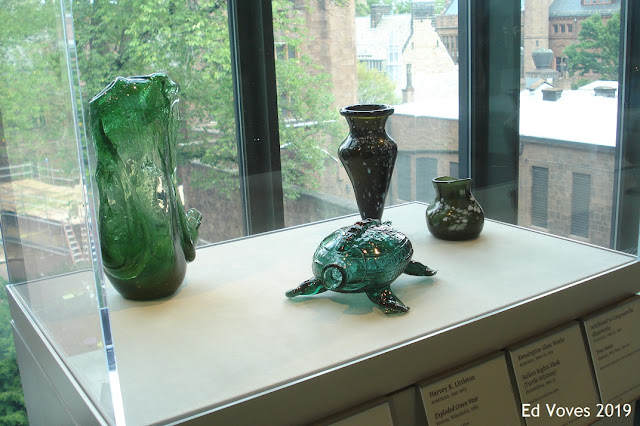 I suspect the reason for doing so was for the sheer joy of adding some wit and whimsy to the world in shape of a glass turtle.  Or perhaps we could say, just for the "hell of it!"

The serious, high-minded things of life march through history with the comical, the sentimental and the troublesome. In 1824, the Marquis de Lafayette accepted the invitation of President Monroe to visit the United States. Lafayette (1757-1834) was one of the last surviving heroes of the American Revolution. Volunteering to serve with the Patriot cause before France formally became the ally of America in 1778, Lafayette had fought valiantly, earning the admiration and friendship of George Washington.

Lafayette's 1824 tour of the still-young nation was a significant event, generating huge amounts of excitement and celebrations wherever the French hero visited. Flasks bearing his image were a popular item. So were charming little salt dishes, shaped like steam boats. 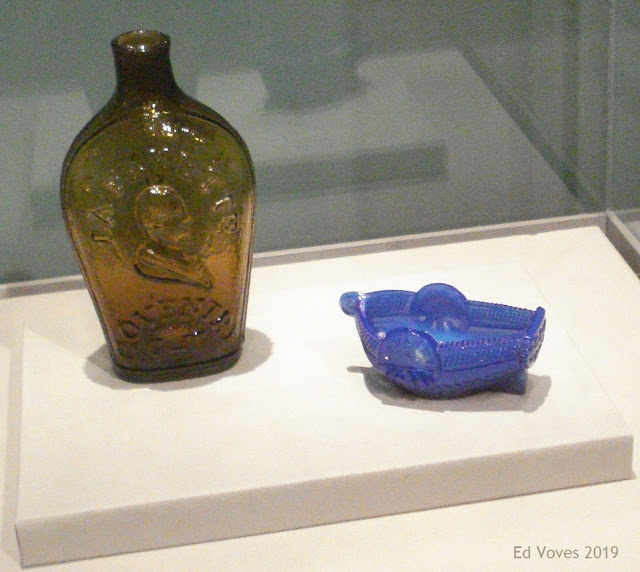 This nautical salt dish, made in Sandwich, Massachusetts, bears the abbreviated form of the French nobleman's name, "Lafayet," on the paddle wheel. This would have been carved onto the mold which shaped the boat/dish, along with all of the other intricate details. Truly, this little blue memento is a testament to the high level of skill that went into its making. 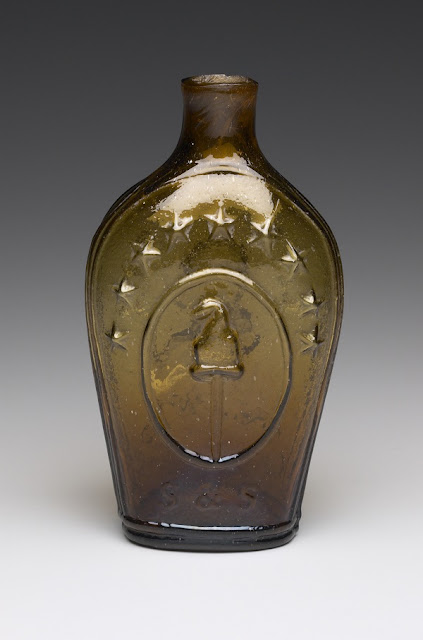 The reverse of the amber-colored colored flask, however, tells a tale about revolution which the elderly Lafayette would have been loathe to remember. The reverse image is not the heroic Marquis in profile but a liberty cap set onto a liberty pole. During the 1820's, these were treasured icons of the American Revolution of 1776. Liberty cap and pole had different connotations in France. They were symbols of the 1793 Terror during the French Revolution.

Initially, Lafayette had been an ardent supporter of the 1789 uprising in Paris, sending the key to the Bastille to Washington. Lafayette saw the French Revolution as a way to create a constitutional monarchy. But when radicals like Danton and Robespierre seized control of the movement, Lafayette went into exile and was promptly arrested by the Austrians who blamed him for the execution of Queen Marie Antoinette. Despite Washington's efforts, he languished in prison for many years.

Liberty caps and liberty poles were thus more of a nightmare to Lafayette than a happy memory. This shows how works of folk art like this flask reveal the complexities of
history. They are far more important than just nostalgic yearnings for the "good old days."

The tangled web of American history is nowhere more apparent than in a string of glass beads dating to the early 1600's. This is an easy-to-miss work in the exhibition catalog, as it was in the exhibit. Yet, it is one the most most significant pieces in Yale's glass collection. 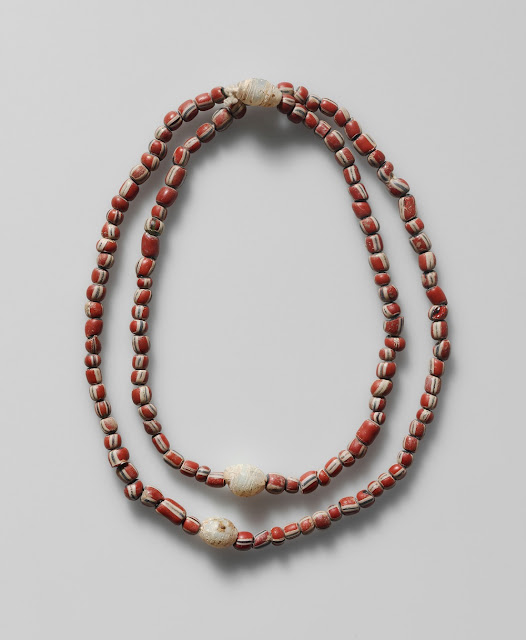 These beads were once thought to have been made at the glassworks at Jamestown, Virginia, soon after the first English colony - to survive - was founded in 1607. The English colonists came in search of gold and then in search of land for a viable cash-crop, tobacco. They needed trade beads to barter with the Native Americans and a glass-blowing works is recorded as having been established. When these beads were purchased in 1929 by the noted collector, Francis P. Garvan, they were believed to have been made at Jamestown.

As Gordon shows in his book, the years of scientific research devoted to this string of beads proved that Garvan had bought the beads based on wishful thinking. These glass beads were indeed manufactured during the 1600's, but most probably in Venice.The hunt for glass beads or any kind of glass made at Jamestown continues.

Garvan's purchase is important, all the same, because it shows how quickly the British colonies in America were drawn into the international economic order which produced the Townsend Duties, among its less pleasant aspects.

A Nation Reflected (and the companion book by Gordon) also provided insight into technical aspects of historic glass making and scientific utilization of glass as well. On view were the amazing  “The Yale Microscope,” attributed to the English scientific instrument maker, Matthew Loft, 1725–35, and the Clevinger Brothers' Two-Part Flask Mold. 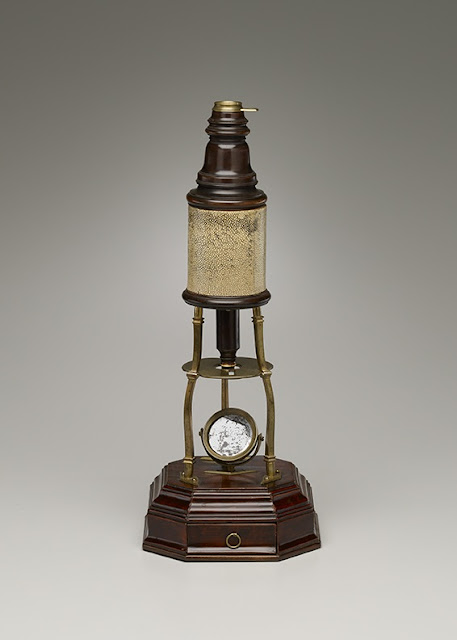 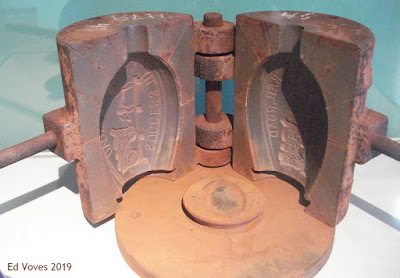 The "Yale Microscope" was called a "prospect glass" when it was purchased in 1735. According to John Stuart Gordon, it is likely the oldest microscope in the U.S. - Harvard's slightly older instrument was lost in a 1764 fire. By contrast the Clevinger flask mold dates to a much later period, the 1930's, but provides valuable insight into how earlier flasks like the Lafayette/Liberty Cap flask was made.

The masterpieces of American glass from later periods of U.S. history provide equally fascinating insights into the development of American art and society. One of my favorite pieces in the Reflecting America exhibition was the Hobbs, Brockunier & Co "yellow-red" vase, 1886-87. This exquisite work dates from the Gilded Age period when fabulously wealthy U.S. art collectors appeared to have gained a monopoly of the world's "things of beauty." 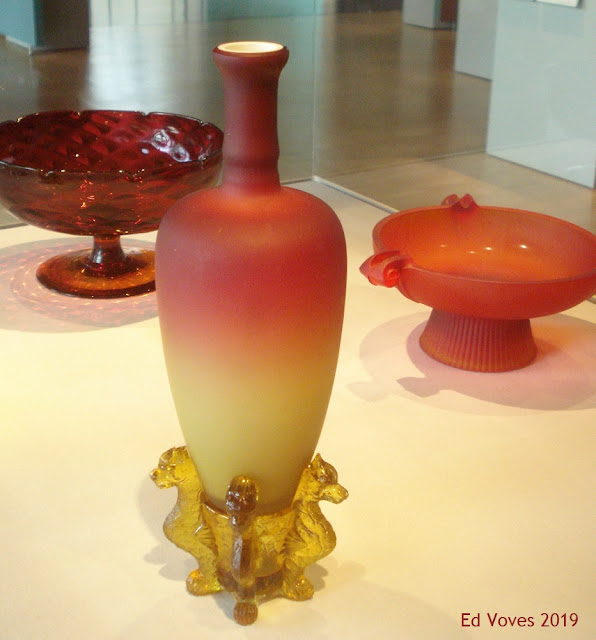 While still beyond the means of most Americans, the Hobbs, Brockunier & Co. vase was within the purchasing range of the second-tier of art collectors. This work of art is truly beautiful, both in the exhibit case or on the page of the companion book by John Stuart Gordon. Though hardly an affirmation of democracy in the arts, the Hobbs, Brockunier "yellow-red" vase enabled an art work of ethereal beauty to remain in the public eye.

One "second-tier of art collector" deserves special mention. The son of Irish immigrants, Francis P. Garvan (1875-1937) was a Yale graduate and prominent lawyer. He was also a sincere American patriot and an enthusiast for American art, especially works created in colonial America and the early period of U.S. history. His collection was not intended for his own, exclusive enjoyment.

"Early or late at the vineyard gate," Garvan wrote in 1930, "the rich heritage of American citizenship is for all alike." 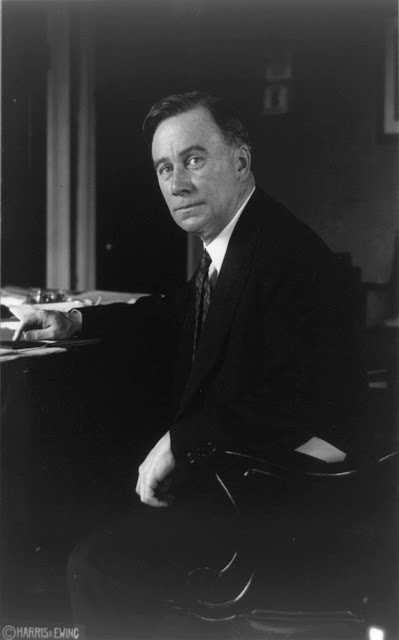 Garvan focused on collecting rare and precious glassware in order to preserve this delicate and often overlooked genre. In 1930, he donated his collection to Yale. Many of the most notable pieces in the America Reflected exhibition, such as the "Jamestown" beads and Steigel's tipsy cream pitcher came to Yale thanks to Garvan. 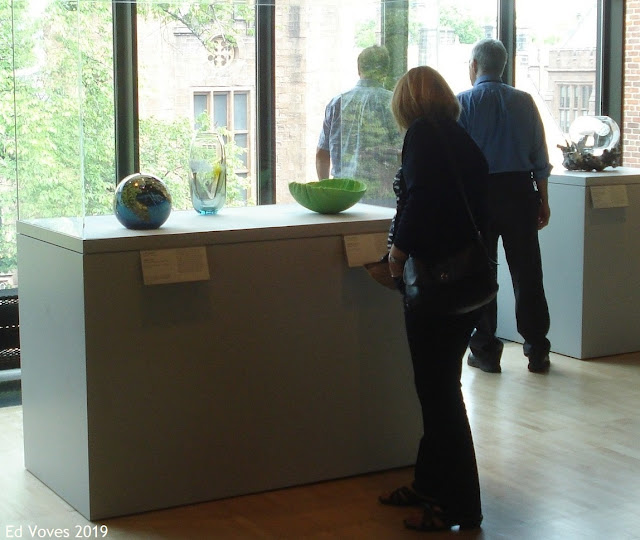 I was well-acquainted with Josh Simpson's otherworldly globes. Most of these small wonders can be held in the palm of your hand and really do evoke undiscovered planets. Mega World (1991), however, is the size of a bowling ball or perhaps it would be more appropriate to say that it has the appearance of mighty Jupiter when seen from a few light years away. 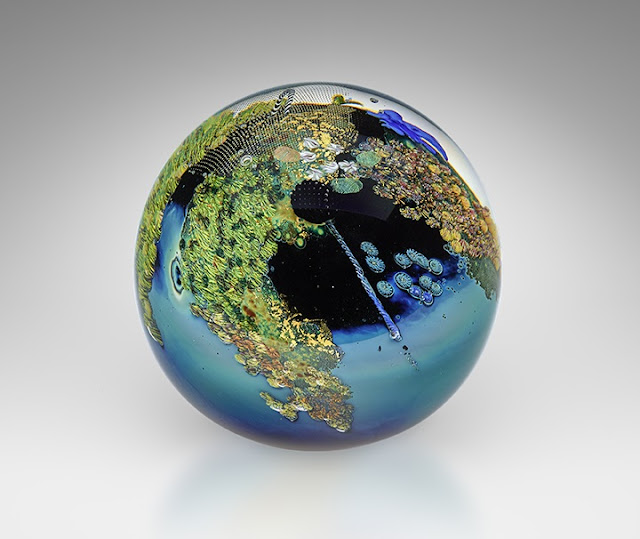 What really impresses me about Mega World, as with Simpson's other "undiscovered planets," is the air of mystery it conveys. The sense of possibility for human discovery and creative expression is down there on the surface of Mega World, waiting for us once we land and disembark from our "spaceship."

Mystery, possibility, discovery and creativity in the American story are nothing new, however. These "intangibles" were very much present before Jamestown, after Jamestown and even now in the America of today. A Nation Reflected: Stories in American Glass made that abundantly clear and so does John Stuart Gordon's companion book.

May it always be so.

***
Text: Copyright of Ed Voves, all rights reserved
Images courtesy of the Yale University Art Gallery and the Library of Congress.

Posted by Art Eyewitness at 7:54 AM