Cost of Revolution at the Museum of the American Revolution, Philadelphia 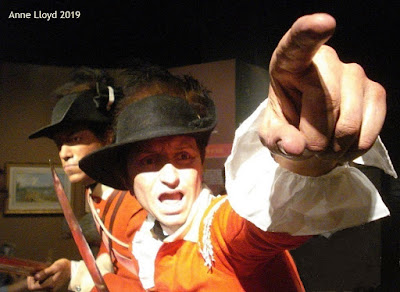 Cost of Revolution: The Life and Death of an Irish Soldier

The American Revolution began in 1773 with a defiant prank that resulted in 340 chests of tea tossed into Boston Harbor. A decade later, on November 25, 1783, America’s struggle for independence ended with a practical joke.

The last British troops to evacuate New York City nailed the Union Jack onto the flagpole at their fort near the Battery. The Redcoats slathered grease on the flagpole so that the victorious Patriots would have a tough time replacing the Union Jack with the Stars and Stripes. It took a few attempts, but Old Glory eventually was raised over New York City.

During the ten year interval between the Boston Tea Party and the British departure from New York, a living-nightmare of suffering, slaughter and sobering loss of life took place. 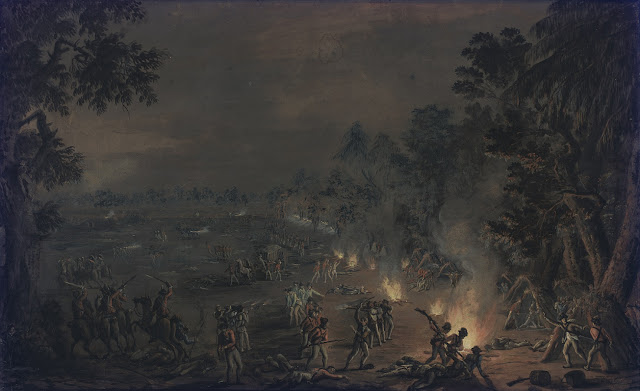 No figures are available for civilian deaths, but these were certainly in the thousands. Many of these non-military fatalities, as was the case in the opposing armies, were inflicted by a far deadlier foe than musket-armed foot soldiers: smallpox. A dreadful smallpox epidemic ravaged North America during the American Revolution. Particularly hard hit were African American slaves who fled to refugee camps set-up by the British early in the war, only to be stricken
. 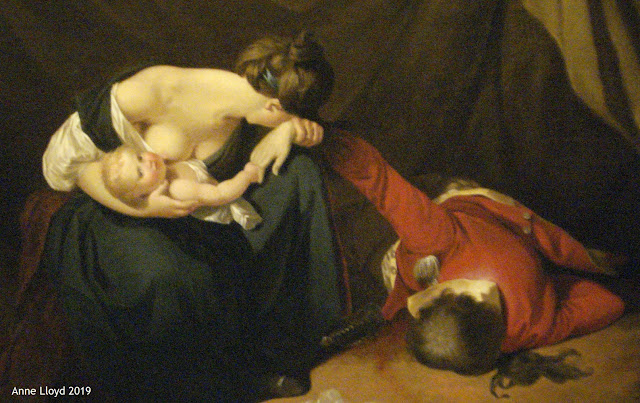 The cost of America's Revolution? A butcher's bill likely to have numbered 75,000 dead.

With all of this slaughter and suffering, why did the Museum of the American Revolution focus on just one soldier's plight? Was the experience of Richard St. George, a lieutenant in a British light infantry unit, so revealing of the hardships of the many? Moreover, is it fitting to use the tale of a soldier who survived the war, though horribly wounded, to illustrate the "cost" of Revolution?

A resounding yes to all of the above! The decision to chronicle the life of Richard St. George is a truly outstanding effort of bringing the past to life. In this superb exhibition, the curators of Cost of Revolution probe many vital issues of the era of the American Revolution - and topics of relevance to our contemporary world, as well. 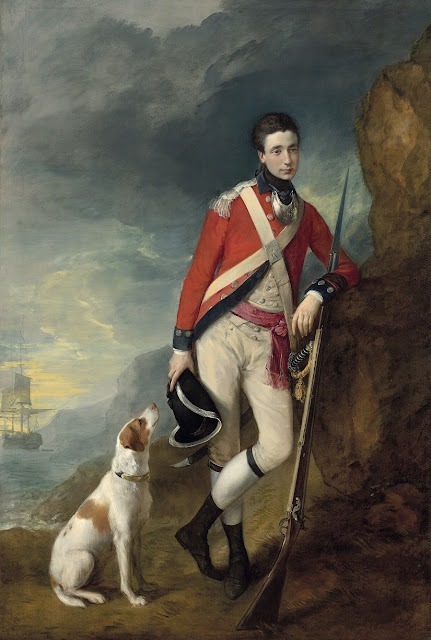 In addition to his courageous service during the American Revolution, Richard St. George was a talented amateur artist and man of wide-ranging cultural interests. Shortly before sailing to join his British Army unit in the American colonies, St. George posed for his portrait in 1776. Selecting Thomas Gainsborough to paint his likeness was an inspired choice. Gainsborough  portrayed St. George as "every inch the officer and gentleman" but also an untested, "unbloodied" soldier.

In contrast to this "before the battle" portrait, the noted Irish artist, Hugh Douglas Hamilton (1739-1808), later painted a number of portraits of St. George still bearing the marks of his wartime head wound suffered at the Battle of Germantown in 1777. 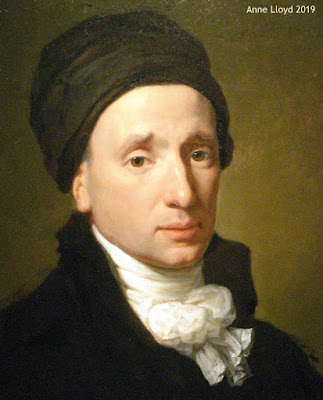 This portrait of St. George, actually done after his death, shows him wearing a skull cap to cover his battle scars.

St. George was shot in the head by one of the deadly marksmen of Washington's army. Because Germantown was  close to Philadelphia (today it is a Philly neighborhood), the wounded officer was rushed to a hospital where skilled medical care was available.

"Rushed" to a hospital is a bit of an exaggeration. St. George later drew a sketch of himself, wrapped in a blue cloak, being taken in a farm cart along with other wounded troops to an aid station. St. George entitled the sketch "My triumphant return into Philadelphia." Later, this somber scene reappeared in a painting of the Battle of Germantown which St. George commissioned an Italian artist, Xavier Della Gatta, to paint. 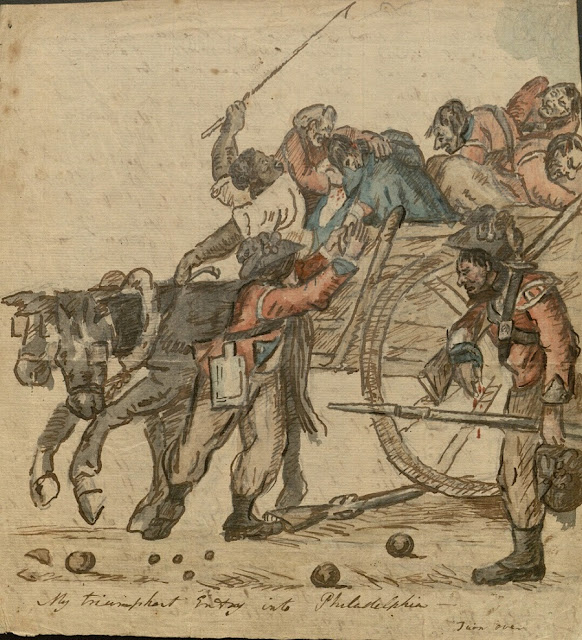 Triumphantly or not, the wounded St. George made it back to Philadelphia. Desperate injuries call for desperate remedies and that is what saved St. George. A surgeon removed part of his skull with a medical instrument called a trephine saw. 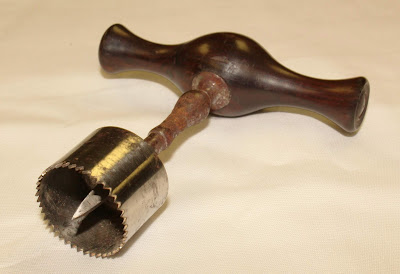 By performing this gruesome operation, fatal swelling of brain tissue was prevented. This enabled the wound to heal by keeping it bandaged and clean. Eventually a silver plate was inserted over the opening in St. George's skull.

It goes without saying that this "brain surgery" was performed without anesthetics. Wounded soldiers were given a "dram" of whiskey or brandy and had a musket ball placed in their mouths for them to "grit" their teeth upon, to keep from choking. Then the surgeons set to work amputating limbs or, in St. George's case, sawing a hole in his head. Wounds in the torso were inoperable and soldiers shot in the chest or abdomen rarely survived.

The emotional scars St. George suffered went much deeper than this nearly fatal gunshot could inflict. His brush with death created a lingering psychic condition which today we call posttraumatic stress disorder (PTSD). 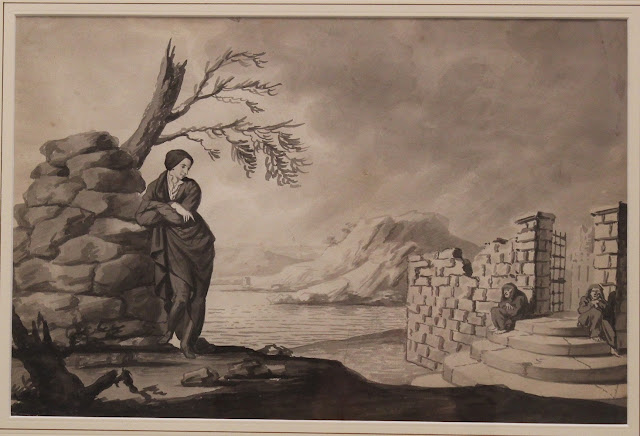 His continued suffering led St. George to investigate spiritualism and other-worldly phenomenon in the years following the Revolutionary War. St. George cultivated friendships with prominent figures in the British cultural scene, who were involved in the great shift of thought and feeling we now call Romanticism.

With his abundant talents, incredible life experiences and sensitive disposition, St. George might well have become a major author or artist himself. St. George, alas, had one more character trait which ultimately determined that he would not "cheat" fate.

Born about 1752 into a family of wealthy Protestant aristocrats, St. George was by birthright a member of Ireland's "ascendancy." St. George's family, prominent in Britain's military, owned a vast expanse of Irish lands which he eventually inherited. Courageous, self-confident to the point of arrogance, the Anglo-Irish warrior-gentry embodied Oliver Goldsmith's immortal words in The Traveller (1764) 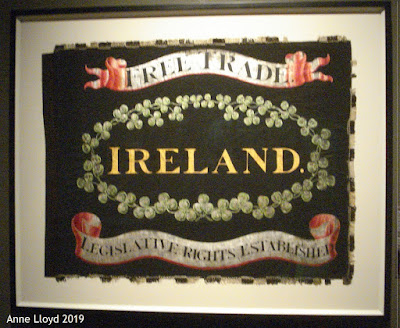 In 1798, the seemingly absolute sway of the "Ascendancy" suddenly was challenged. Radical insurrection, triggered by the French Revolution, reached the shores of Ireland.  For the second time in his life, St. George confronted the "cost" of revolution, and this time paid the full price.

The Museum of the American Revolution received cooperation of the highest order from a number of Irish museums, making a carefully-balanced treatment of the life and times of Richard St. George possible. One of the treasures of Ireland's National Museum is on view in Cost of Revolution. This is the bloodstained pocketbook or wallet of Theobald Wolfe Tone (1763-1798), a leader of the United Irishmen, who tried to break Britain's control of Ireland. 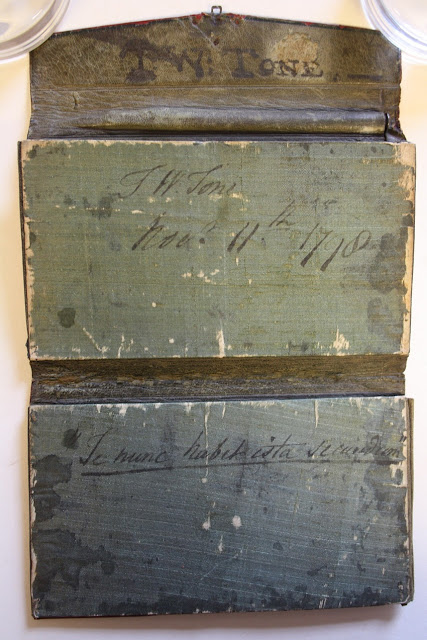 I cannot recall any previous exhibition in the United States dealing with the 1798 "Year of Liberty" in Ireland. Cost of Revolution is a true revelation in this respect. 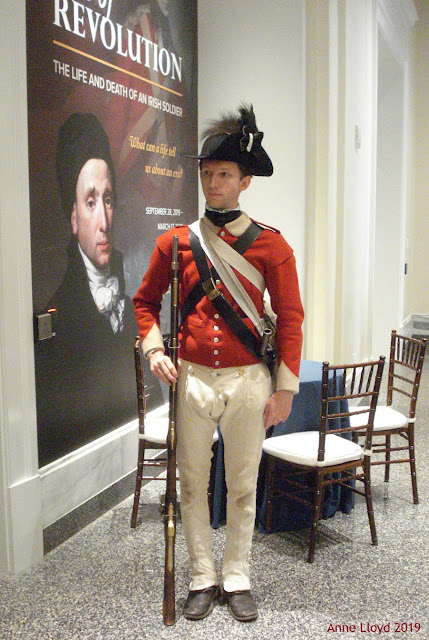 At the press preview, several "living history" educators from the museum's staff were present. Two of them were dressed in the combat attire of St. George's regiment, the 52nd Foot, as the British called infantry units.

St. George and his comrades were light infantrymen and here another surprise from the past is in store. During the Revolutionary War, the British became as skilled as the Americans in "Indian-style" tactics, taking cover and firing from behind trees. A Scottish officer, Major Patrick Ferguson (1744-1780), introduced a breach-loading rifle during the war. A working replica of the Ferguson rifle was on hand at the press preview which museum president, Dr. R. Scott Stephenson, expertly explained. 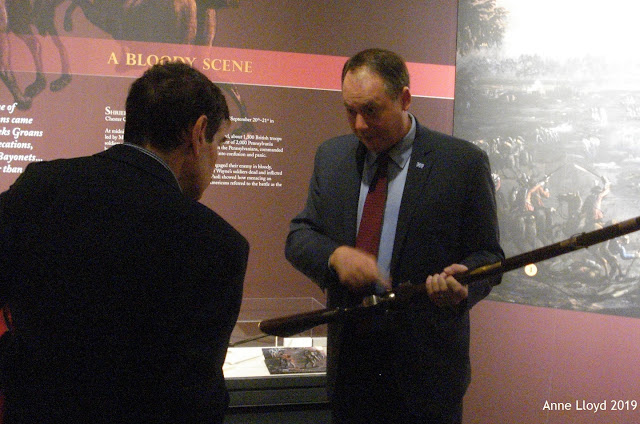 The Ferguson rifle was the most advanced firearm of the eighteenth century but, fortunately for Washington's Continentals, it was a little too advanced. According to Dr. Stephenson, this rapid-firing weapon quickly clogged after a number of shots, due to the build-up of residue from the crude gunpowder used during the 1770's.

Warfare during the "Age of Reason" had more in common with the horrors of the Thirty Years War than with enlightened rationalism of Voltaire and Diderot.

As the centerpiece of the gallery dealing with the Battle of Germantown, a life-sized - and incredibly life-like - display of two light infantrymen of the 52nd is on view. We are confronted with the "face" of battle. The features of the sword-bearing officer are modeled on those of Richard St. George. 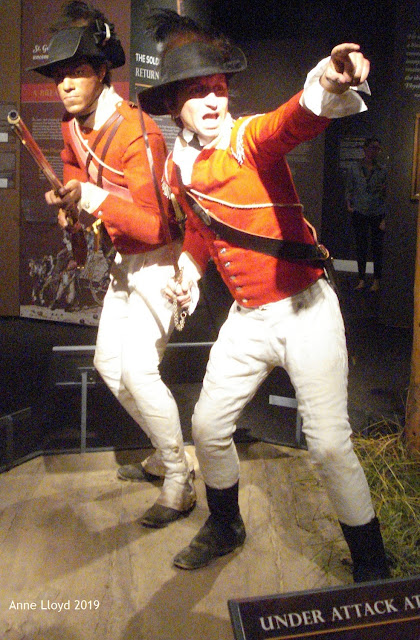 Anne Lloyd, Photo (2019)
Gallery view of Under Attack at Germantown
at the Cost of Revolution exhibition

The astonishing realism of this sculpture has to be seen to be believed. Once you look into the eyes of these grim-faced warriors, you start to realize what it means to fight for your life, to kill or to be killed.

My wife and I were very moved to come face-to-face with Richard St. George when we studied this stunning work of historical recreation. Anne and I had seen a similar display dealing with the Napoleonic Wars at the National Army Museum in London many years ago. I mentioned this to Dr. Stephenson who said that both statue groups were based on the research of a great historian-illustrator named Gerald Embleton,

At the risk of contradicting myself, I did discover a link between the Age of Reason and the bloodshed of the American War of Independence. Adam Smith, the great Scottish economist, published a treatise of philosophy entitled Theory of Moral Sentiments (1759). In this work, Smith makes an observation showing the way that human beings can connect with the experiences of others, on different sides of the battle line and across centuries.

As we have no immediate experience of what other men feel, we can form no idea of the manner in which they are affected, but by conceiving what we ourselves feel in like situation. Though our brother is upon the rack, as long as we ourselves are at our ease, our senses will never inform us of what he suffers … it is by the imagination only that we can form any conception of what are his sensations. 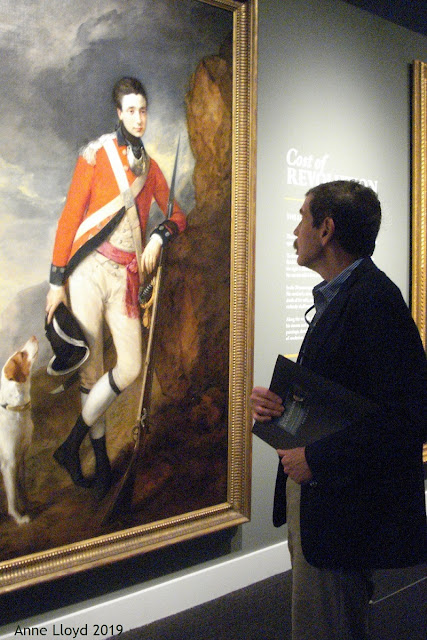 That is precisely the effect that Cost of Revolution has, informing, stimulating and challenging our "imagination only that we can form any conception of what" are the feelings of other human beings.

The resonances of Richard St. George's life are truly palpable in the exhibition galleries at the Museum of the American Revolution.

The experience of combat, of living with a debilitating wound, of being caught a second time in the chaos of political upheaval are not abstractions in Cost of Revolution. For a moment, however brief, our imaginations are moved to feel and to understand what Richard St. George endured when a well-aimed bullet at the Battle of Germantown stretched his body and his mind "upon the rack" of suffering - from which he was never to be free.

Anne Lloyd, Photo (2019) Under Attack at Germantown (detail), gallery display at the Cost of Revolution exhibition, the Museum of the American Revolution, Philadelphia.

Trephine (Skull Saw). Mütter Museum of the College of Physicians of Philadelphia

Anne Lloyd, Photo (2019) Flag from the 1798 Irish Revolt, on display in the Cost of Revolution exhibition at the Museum of the American Revolution.

Anne Lloyd, Photo (2019) Gallery view of Under Attack at Germantown, exhibit display at the Cost of Revolution exhibition, the Museum of the American Revolution, Philadelphia.